Very interesting build, thanks for sharing.
I'm thinking of doing the same, but I was wondering if the hinges you used have any lateral play in them? I found that even expensive door hinges have some play... I'm looking for something with zero play.

What are those types of hinges called?

Also, just fyi - the alumnium plate you have at the front: some festool MFT users have noted that their front metal stop will gentle wear away at the track, creating slop. A third party in the US sells a 'slop stop' , plastic insert to the festool track to overcome this.

Not sure you will encounter this problem especially if the front plate is softer than the track, but just letting you know in case. I may make my front plate or of acrylic/polycarb.

The hinges are from China via ebay, search "Aluminum T-slot Hinge Profile Accessories 2020 3030 4040 Series CNC" however they appear to have changed the item a little. You can buy them from most aluminium profile shops, I bought the 4040 profile model.

Thanks for the info on the front plate, I shall take a look.

Thanks Andy, and you are getting no lateral movement from these?
Cheers

I've just checked, there is probably something like 0.25 to 0.5mm lateral movement. Doesn't seem to make much difference to the cut once the back slider knobs are locked and the front of the rail is engaged into the aluminium plate but I guess it could in theory. Now I've got an accurate top, I shall keep and eye on it to see if this is the next improvement. I'm not sure if they could be pulled apart and some PTFE shims inserted to take out the slack. I won't bother unless necessary. I wonder what the Festool hinges are like?

Farmer Giles":1mqxqrgp said:
I've just checked, there is probably something like 0.25 to 0.5mm lateral movement. Doesn't seem to make much difference to the cut once the back slider knobs are locked and the front of the rail is engaged into the aluminium plate but I guess it could in theory. Now I've got an accurate top, I shall keep and eye on it to see if this is the next improvement. I'm not sure if they could be pulled apart and some PTFE shims inserted to take out the slack. I won't bother unless necessary. I wonder what the Festool hinges are like?

Thank you for taking the time to check and measure.

Its been a while since I've posted, work and life in general getting in the way, but I'm now beginning to get back to some woodwork at last.

Here's an update on the bench. Here's a recent photo, not much has changed, I mounted the blades for the Wadkin PK, mitre saw and track saw on the partition as they don't take up much depth so the track can still lean against it. I also welded up a small table for the mitre saw. I've moved the extraction above the table, I now need to add a bungee to take up the slack. Pity the Mafell track saw doesn't have a removable lead for power like the Festool or I would put the hose and power in a sleeve. I could cut the lead and put my own plug/socket on but will probably just hook the power it over a bracket and use a bungee, I'll have a think. 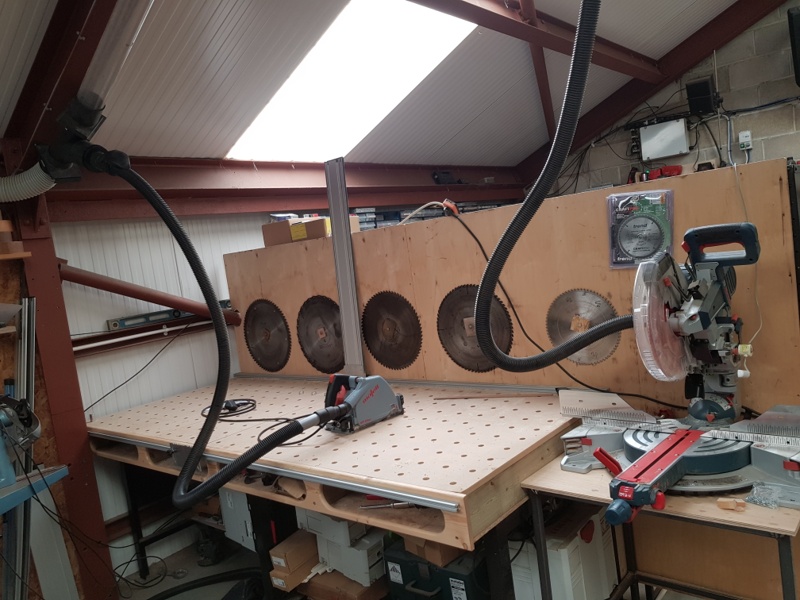 I then started looking at the fence for the mitre saw. With the saw butting up the partition with just enough room for the saw to swivel for angled cuts, the fence need to be between holes on the MFT top. After measuring up I needed to glue two lengths of 18mm MDF together to get the face where I wanted it. The workshop needed a good clean up, its a bit tidier now. 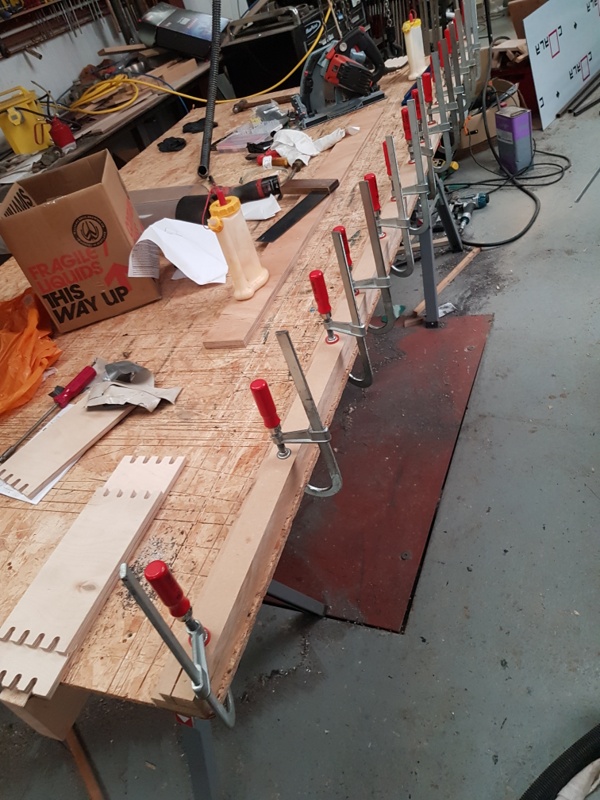 I then screwed on the Kreg to track, in this kit it comes in 4 x 2ft lengths. 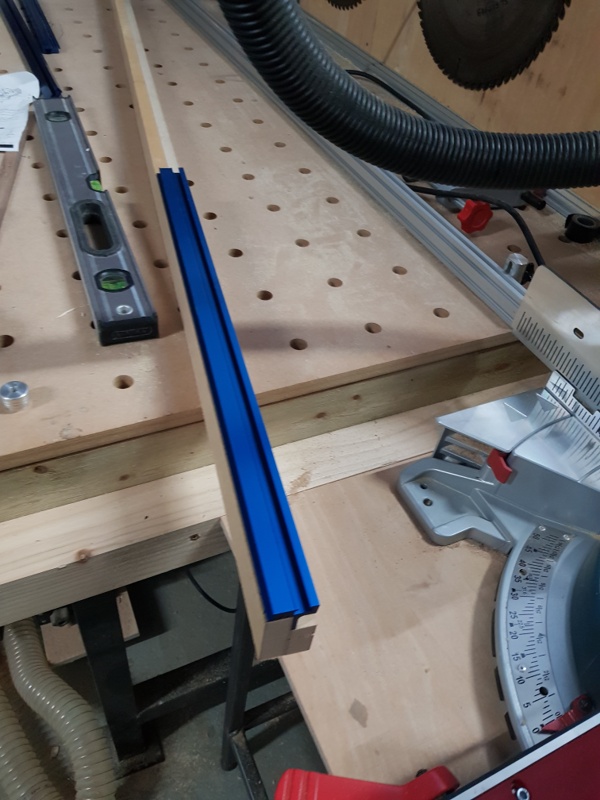 I then used M5 tee nuts and bolts to attach it to some 4020 profile aluminium. I think the bench dogs are these, I bought then a few years ago, I would probably make them myself now as I have some 20mm square aluminium bar. The idea is that I can lift off the fence and park it on top of the partition when I need to use the MFT for the track saw, and by using the dog holes it should line up exactly with the saw when I refit it. 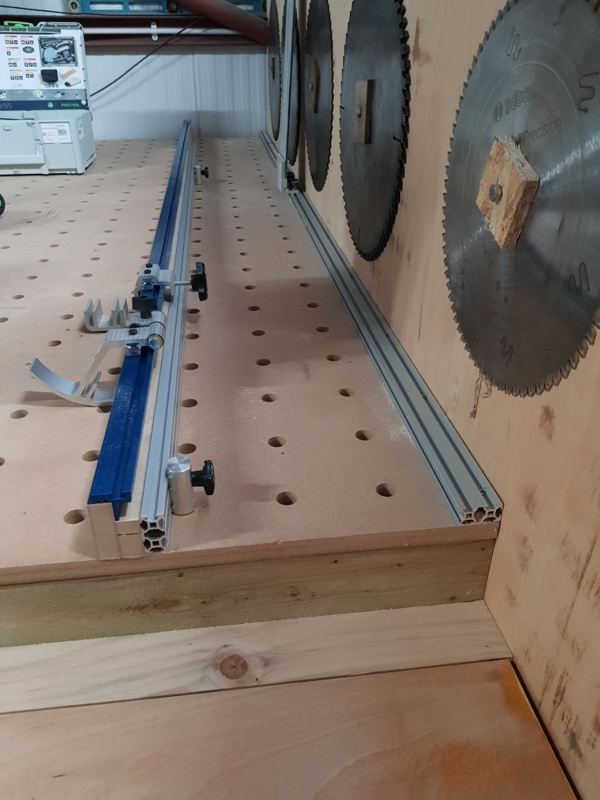 I then squared up the saw with the fence, levelled up the saw table and screwed the table to the bench and bolted the saw down. To square it up I clamped a long straight piece of 2" aluminium square tube to the fence then moved the saw to meet it. 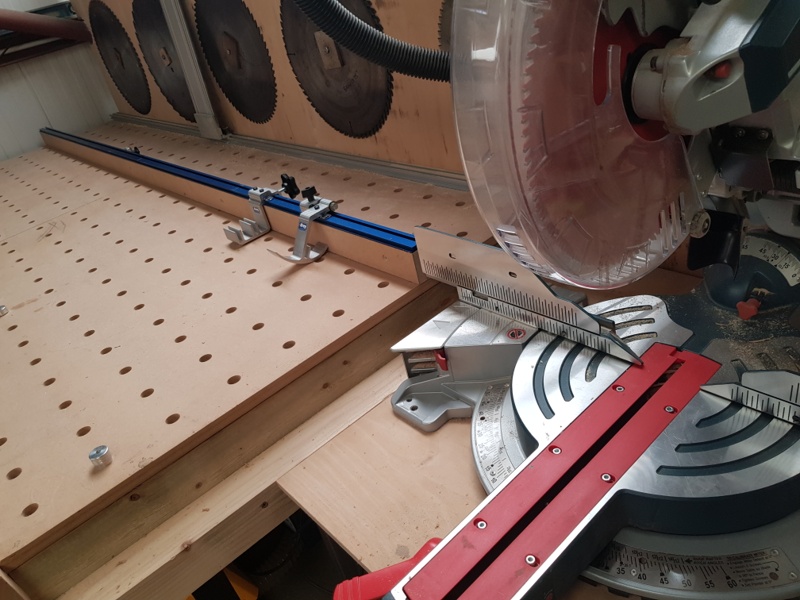 The next job is on the other side of the saw. I'll make a fold down fence as this is in the path through the workshop. I will have nearly two foot of top track left over after making the fold down fence. From this I will make a shorter version of the fence for the MFT on the left so I can use track saw and mitre saw at the same time when cutting down shorter stuff.

I'll add the rule to the top of the track later once I've completed all the fences.

Here's the fold down fence to the right of the saw, mainly made from bits of scrap, a side of an old kitchen unit, a bit of MDF that was in the departure lounge to the tip, a couple of bits of 25 and 20mm box, and an old bolt. only new bits was some cheap T hinges and the Kreg top track.

This photo has the bit of 50m box clamped to the mitre saw, it was used to make sure the fence was square vertically and horizontally to the mitre saw. The support is constructed of 20mm box with a nut welded in the end so I can use a bolt to adjust the height. The 20mm box slides into some 25mm box than hinges at the bottom where it attaches to the saw table.. A simple pin holds them together. Once the pin is removed and the 20mm box slides into the 25mm box, its short enough to stow away on the saw table frame so the fence can fold down. 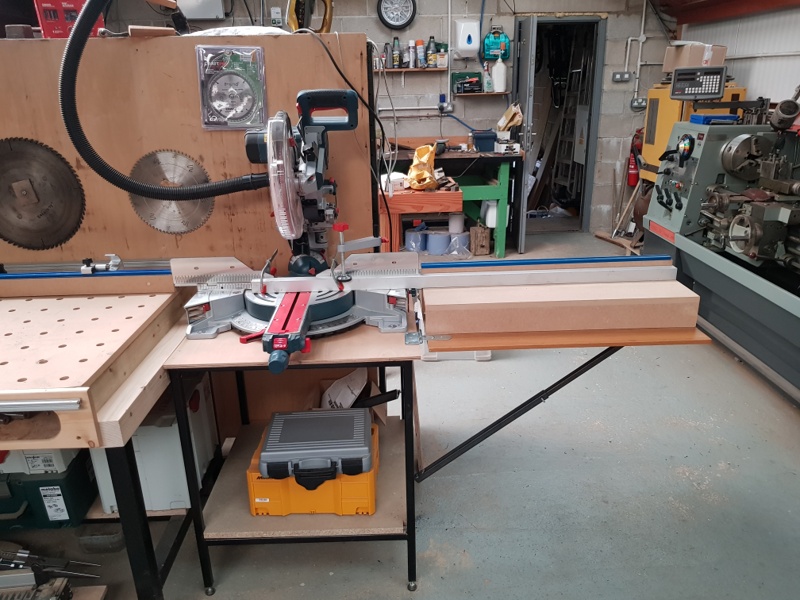 I can now have stops either side, the right hand stop has adjustable graticules on both sides so once I put the tape measures on to the top track, you can adjust it for different kerf saw blades if your sawing to the left or right of the blade. 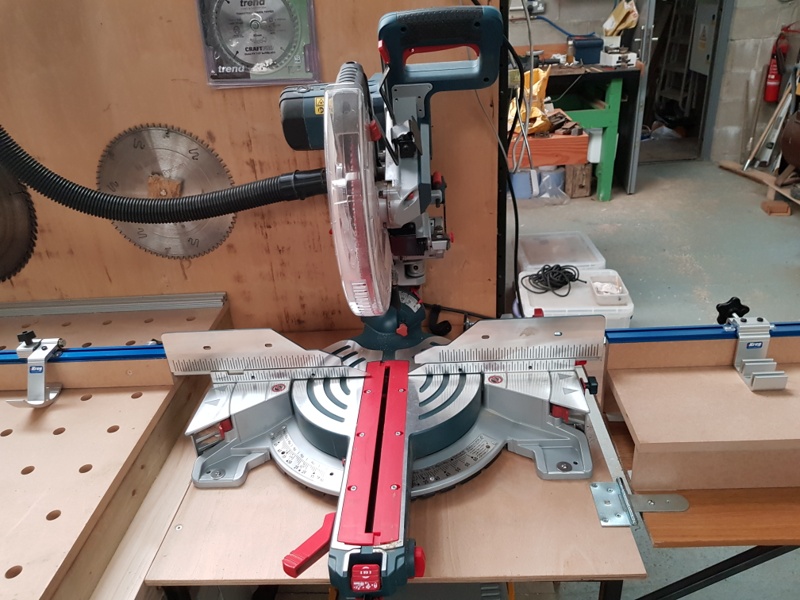 And with the fence folded down 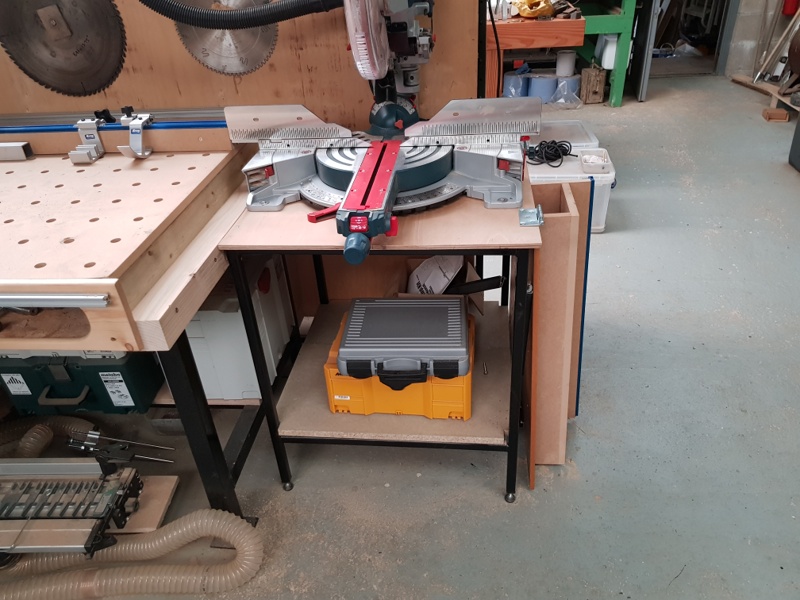 I still have a bit of finessing to do but it all works. I may add a slide out support for longer timber to the right, it needs a coat of paint and the way the fence support locates in a bit of angle underneath the table needs looking at, plus a coat of paint. I also need to make a short fence for the left of the saw so I can use the MFT for sawing and use the mitre saw at the same time as long as the stock isn't long. I have a few bits of Kreg track left so will do that soon and get the job finished.