How would you have marked this out?

I am currently making some japanese inspired shelves.
There are 5 shelves and then a top and bottom piece. Each side has two rails, where each shelf has two long tenons that go through the rails. 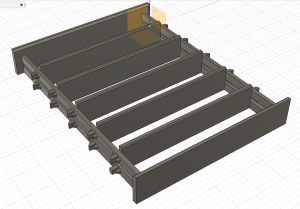 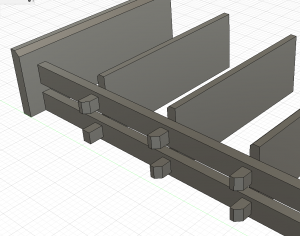 I then milled the shelf material, marked the tenons out, and cut them out on the bandsaw and by hand where I couldn't use the bandsaw.

As you can probaly imagine, nothing really fits. Both the tenons and mortices are slightly out in some way or another. So I have to do ALOT of filing of the mortices to get things to fit. And some go the other way and are really sloppy.

I think my problem was with the marking out. I layed the mortices and tenons out by ruler (Incra T-Rule). I'm confident that the measuring was accurate, and the error seems to have come from perhaps being 0.5mm out on the bandsaw and then maybe 1mm out on my chiseling.

I guess I should have only marked out the tenons, and then used the tenons to mark the mortices? rather than measuring them both out? but as you can see from the image, trying to hold the shelf to mark out the mortices would have been super awkward.

So would you have done it differently? or do I just need to be more accurate?

Yes of course being more accurate (in both marking out and cutting) would be beneficial but there may be other factors which you haven't intimated at.

Marking only one of the side panels out and machining both together is the most obvious but always working from a common datum is probably most important.

You say you 'cut all the mortices using a drill' If that was 'by hand' then you are on a hiding to nothing, if you have a Pillar drill then setting up a fixed jig is a simple matter and will make the job much more accurate.
Last edited: 6 Sep 2021

Another ideal job for marking out with a rod.
I've got a little project coming up shortly and I'll try and document the process.
It's the most useful and essential thing you need to know about after you have learned which end of a plane, saw, chisel, is which.

One tiny aspect. Having accurate measurements, how accurate are your marks?
With a knife or pencil? An accurate rod would help, Same applies though with the rod?
transferring tenon to mark side - if an accurate 'dummy' tenon could be made, then use
that on all mortices? Does that make sense to you?

if you’ve tried to marry up 8 faces of the mortices with 8 faces of the two tenons, that’s a bit of a challenge, to secure the shelf you only need 3 to fit, the others can have clearance (and probably should).

A shallow rebate on the vertical rails would self-locate all the shelves, you then cut the mortices through using the edges of the rebate as your references, cutting all 4 verticals together means they will all align…

which is easy to say after you’ve done it!
J

although I also would have housed the shelves that's not really the question.
is everything square and flat and prepared at the same time?
then marking for this is really simple. crosscut to size. then everything is ganged together and squared across. uprights. then shelves and top and bottom because aspects will be the same length namely the inside shoulders of the tenons and the inside face of the mortices on the top and bottom(or however you join top to uprights).
the advantage of housing the shelves is 1 the strength and 2 it hides the trickiest cut which is accurately removing the wood from between the 2 peg tenons which can only be done by hand or passing over a dado or using a router most will break out the end grain somewhat.
not sure I'd use a rod as such just mark out using the actual shelves and a spacer on one then square across.
the shelves I would gang the shelves then mark the cut out bits using a marking gauge then separate and take them all around.Dont forget to include top and bottom as well.
I can't stress the importance of flat and square in the success of this

Thanks for the replies.

I then used this reference rail to transfer all the lines to the other 3 rails. Making sure to always use the first rail to reduce accumulated error.

So now all rails are layed out, quite a bit of work.

I then drilled out as much waste as I could from each mortise at the drill press. And then used a chisel to remove the rest and square them up.

At this point, my rails are "done"

Next I moved onto the shelves. I marked out the tenons on one end using my T RULE and 0.5mm pencil. The only critical measurement here being the width of each tenon. I then set up my bandsaw with a depth stop the length of the tenons. Then aligned the fence to cut one side of the first tenon. Once that was dialed in, I cut the same part of the tenon for all the other shelves. I repeated this operation for each part of the tenons on all shelves. In other words I had to dial in the bandsaw 4 times in total.

The waste around the tenons was cut by hand.
J

is the entire piece square and the correct size. is it just the joints that are off?
P

Sounds to me like your marking knife and your chisels were not razor sharp. Drilling waste out has to be done at 90. All these operations take years of experience learning from old boys at the bench not on youtube.
J

even the old boys get it wrong! im working on a rotten window that's over an inch to short on the height.I would suggest a critical analysis of what went wrong and what was good. sometimes that is the most positive approach.
even better is to make the same thing again after appraising what went wrong.
try to decide which steps matter and which don't.

I'm in the knife marking camp for accuracy. Being able to drop your chisel into a knife mark as the final cut helps me get accurate mortices and also shoulders etc. I find even the sharpest pencil line it's easy to not be on it or for the chisel to move fractionally as you start the cut.

My other thought regards order of operations is you need to keep one edge of all the mortices aligned on each vertical, and the tops of each mortice aligned between the two verticals on each side. Then all joint fitting is completed only on the tenons, and only on the edge of the tenon furthest from the reference side. This way you maintain your constant reference edge between the shelves and in theory this would minimise how errors in one shelf interact with errors in other shelves.

I find even knife lines can be a bit inaccurate, but that maybe down to knife style and technique,
I suspect the corners is where the error starts, so will try and be super light with those tools anymore.
Take dovetails for example, Cosman shoots the ends and uses a marking gauge for the bassline, and has mentioned the chance for errors to add up.

So for me, I'd do it the slow way, involving a shoulder plane.
I would have fitted the four strechers to the bottom, and got them perfect, the marking knife
lines may or may not be accurate, the bottom should be flat and have the final word,
as it doesn't look like there's gonna be drawboring in this case.

I'd then do the top, and get it parallel, knife lines might actually not be really needed,
I think I will opt for the retractable pencil in this case anymore, as once again the top will have the final say.
A shoulder plane along with a chisel can be used with trial and error test fitting, and end up with no gaps.
Regarding the fit or the tennons or mortise, a vernier calipers is a must have, I don't read them, they just tell me the fit by friction, and get locked off. 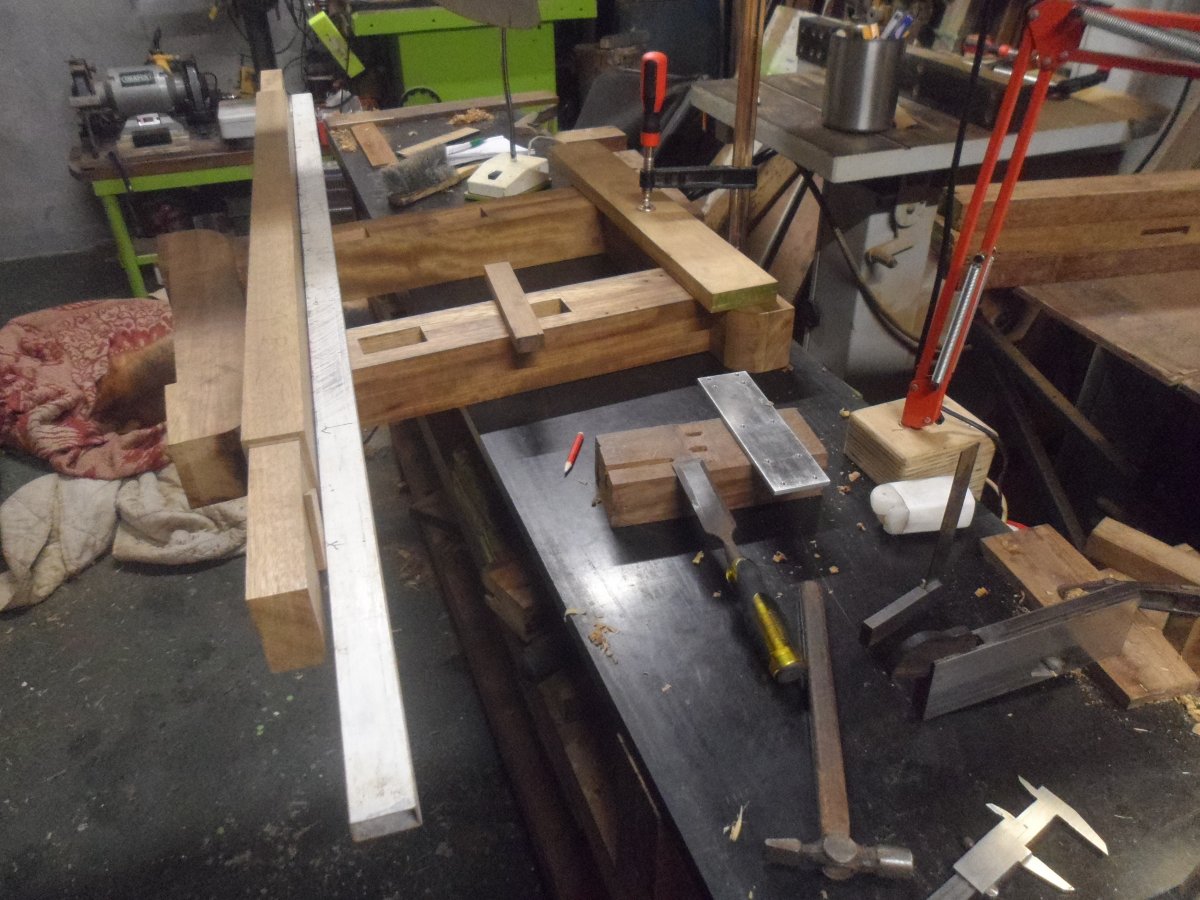 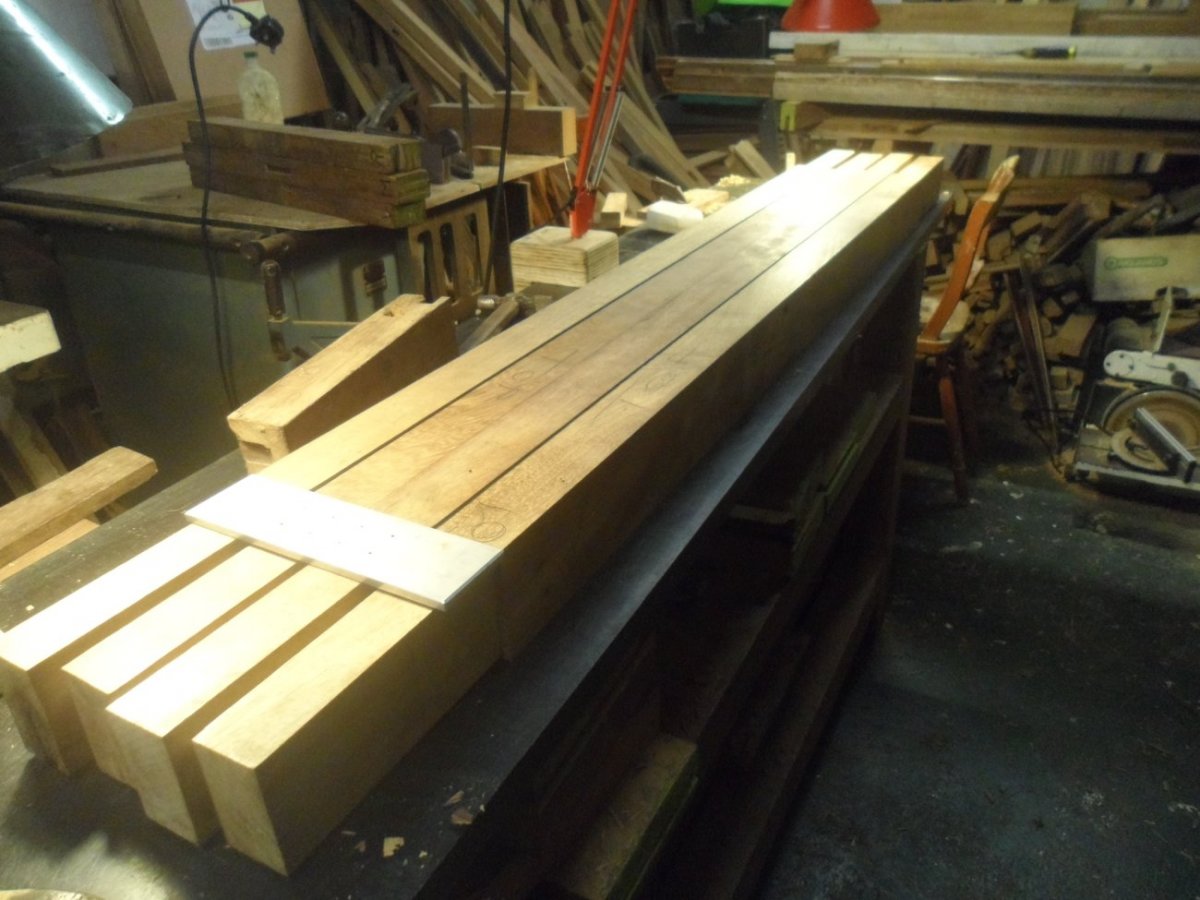 If you've not paired shoulders before, but think you might have to
(doing so in conjunction with knife lines)
then I suggest you plan on making it taller, as you will overshoot those lines, even with notes taken! 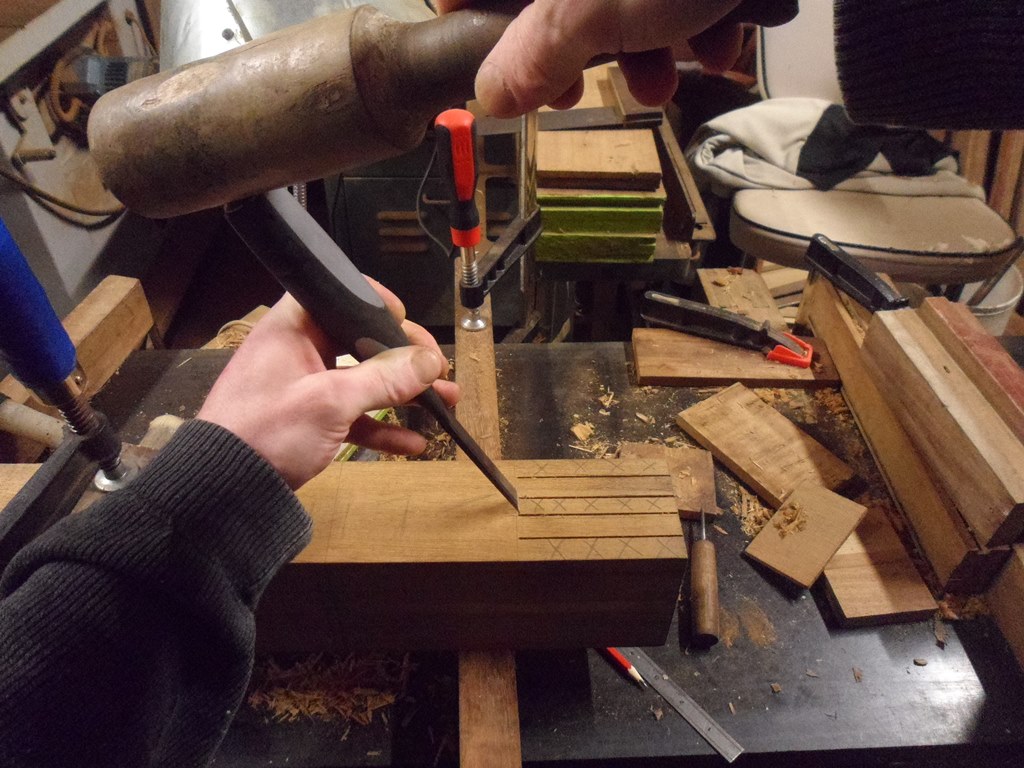 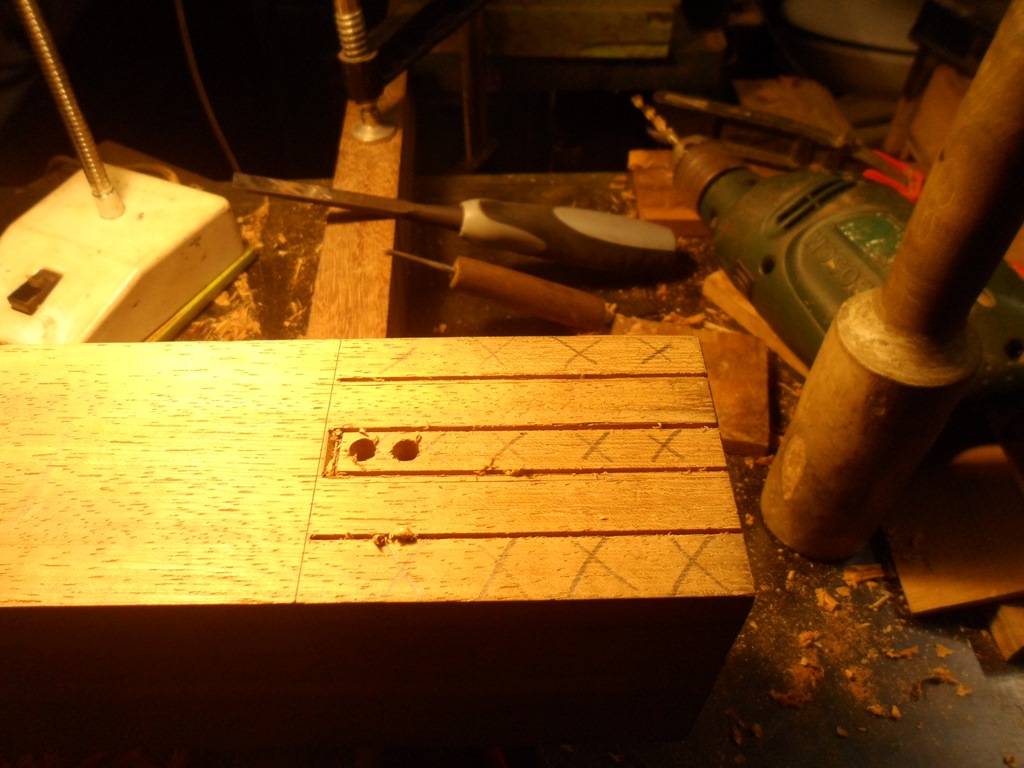 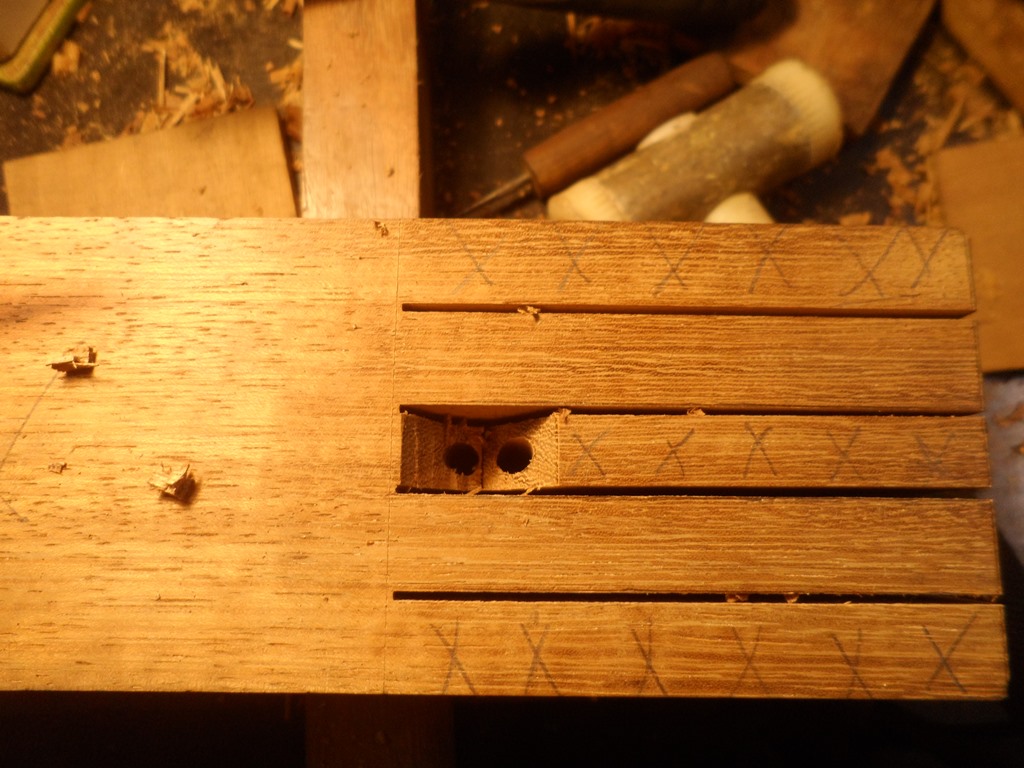 Still have my knife line in the end, with as little waste as possible, so less chance of any waste forcing the bevel beyond the line.
At that point I swap chisels to the cranked Stanley parer as it is flat, the other Tesco one is slightly hollow, but it has a handle in line so better for hitting.
David W's uses a bellied chisel for this, (look on his channel)
as it can be steered out of the cut,
Either way, often you've gotta respect the force of the waste on that bevel, as it will have the final say
and not a knifeline that may diasppear, unless one intends to leave the knifeline there, which some like to do. 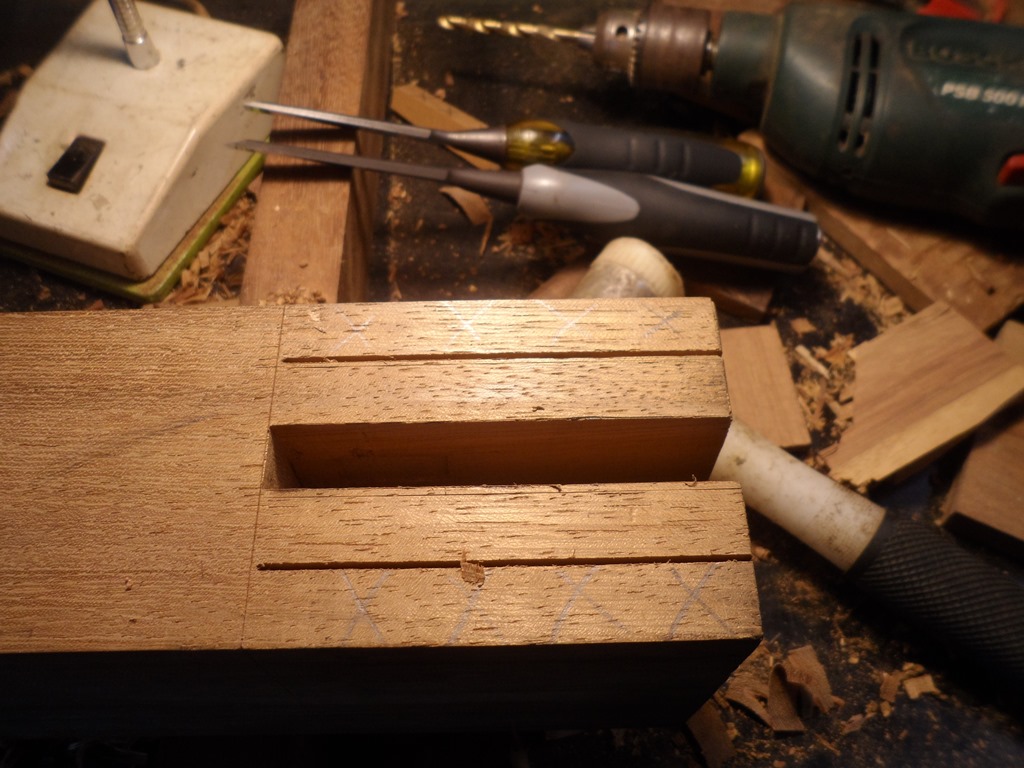 I've noticed beginners I've had in the workshop can make a terrible hash of marking up particularly using a square.
they tend not to push the stock against the work with sufficient force. it's exaggerated with a knife as well. what happens is the square tips leaving a curved line. which is then transfered around badly causing everything to be a bit squiffy.
B

You forgot to add the bevel on one of the tenons

Can you have a play around and see if some tenons and mortices fit better in other locations? If so, number them for assembly.

R
drilling round mortise in round tapered leg