How to make better router cuts

I'm in the process of building some molds out of 1/2" acrylic sheet and I'm using pattern pieces and a straight cut bit on my router to cut the acrylic to size (first time I've done this btw). Although I know my pattern pieces are good and straight (come from a pro cabinet maker) the acrylic ends up having little ripples on the cut face no matter how little I try to take off at a time. Since the patterns are good I guess the problems got to be with my setup.

I'm running a Dewalt DW616 1.75? HP router on a flimsy Skill RAS900 router table that weights maybe 15 lbs. and not held down. The bit set was cheap off amazon and unfortunately has a 1/4" shank.

I'm guessing I need to at least screw the router table down and use a 1/2" shank bit. Any other suggestions?

You get rid of the ripples (they are impossible to eliminate completely using a hand pushed feed) by either sanding or flame polishing the edges.
O

You need a single flute spiral endmill, there are specific geometries for acrylic and stuff.
You might not get it perfect but many times better than a straight bit.
Try rennie tool or ew equipment. Or even Chinese cheapies from ebay or amazon can be actually really good.

Thanks for the suggestions guys. I've had what's called a O flute cutter or endmill suggested for cutting acrylic. It was actually suggested in an article written on using CNC to cut acrylic. What's the difference between a O flute and single flute endmill?

Better chip clearance for the curl. Engineering spiral end mills have too shallow a flute for acrylic IMHO.

BTW that article wouldn't have been the Onsrud site you by any chance? Excellent source of info on machining plastics

When machining many plastics you need to reduce the spindle speed and increase the feed rate - the idea is to generate a stream of curled chips as opposed to just dust. This is easy to achieve on a CNC but quite tricky with a hand held router. Whilst a spiral cutter can give a slightly better quality of cut on acrylic it will have a tendency to pull out of the collet (up cut) or push itself up into the collet (downcut). Up-down combined cuts invariably leave a witness mark on the workpiece.

In terms of finishing, sanding will work, but leaves an opaque edge. A second technique is to scrape the edge with a cabinet scraper, but this then requires further polishing. Flame polishing is what the trade guys use, but it requires a very hot and clean flame, such as acetylene - and polishes like that aren't cheap. Propane and butane tend to discolour the edges as they aren't clean and aren't really hot enough. Another technique (after machining and scraping) is to wipe the edges quickly with a clean white cotton rag which has been loaded with a bit of MEK (methyl ethyl ketone) as this dissolves the acrylic but evaporates rekatively quickly leaving a polished edge. Note that MEK vapour is nasty, highly flammable stuff so needs to be used on a well ventilated area. Possibly the cheapest option but unsuitable for large scale work
Last edited: 15 Jun 2021

JobandKnock, actually I think it was the Onsrud site. Good article.

Well it turns out after all my searches there are no O flute upcut flush trim bits as none of them come with a bearing. I think they're all meant for CNC. 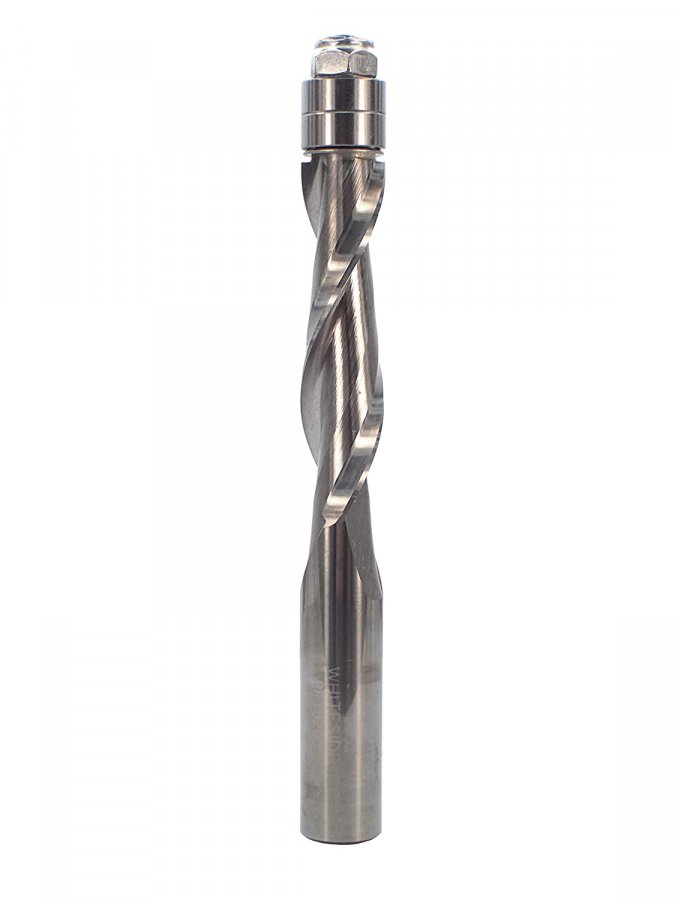 Yes, but watch out for the tendency these things have to pull out of the collet when getting blunt or making heavy cuts - hog out your cuts to within 2mm of the line with a jigsaw if possible Bosch, et al, do acrylic jigsaw blades these days).. Also get some good dust extraction on your router and leave the protective film on the acrylic whilst making the cuts if at all possible - these two things combined greatly reduce weld-back (where hot waste chips land on the surface of the acrylic and fuse themselves to the surface of the material)
Last edited: 15 Jun 2021