How to improve the look of this small mug table

My MIL wanted a small table for hubby to put his mug on so I thought it would make a good turning exercise for me. They have ercol furniture so copied the simple 2 taper style leg and turned a small top which I then bored 3 angled holes in for the leg tenons. This is the first turned project I have done appart from practice bowls, spindles etc. It’s made of oak as that’s what I had.

I found the legs hard to do, creating a smooth taper was extremely tricky and I ended up use a rouging gouge to get the approx shape, then a combination of planing cut with the skew and then a flat scraper. I also made the mistake of not starting with the legs all the same length so once I’d trimmed them to length of course the bottom of the one leg is slightly bigger diameter that the other that didn’t need trimming.

Anyway I digress, the reason for the post was suggestions on how to make it look better proportioned, it just doesn’t look right to me? Perhaps thinner legs? Perhaps a shelf halfway down? Or will it never look right because of the design? It’s not assembled so I can remount and do some more work. 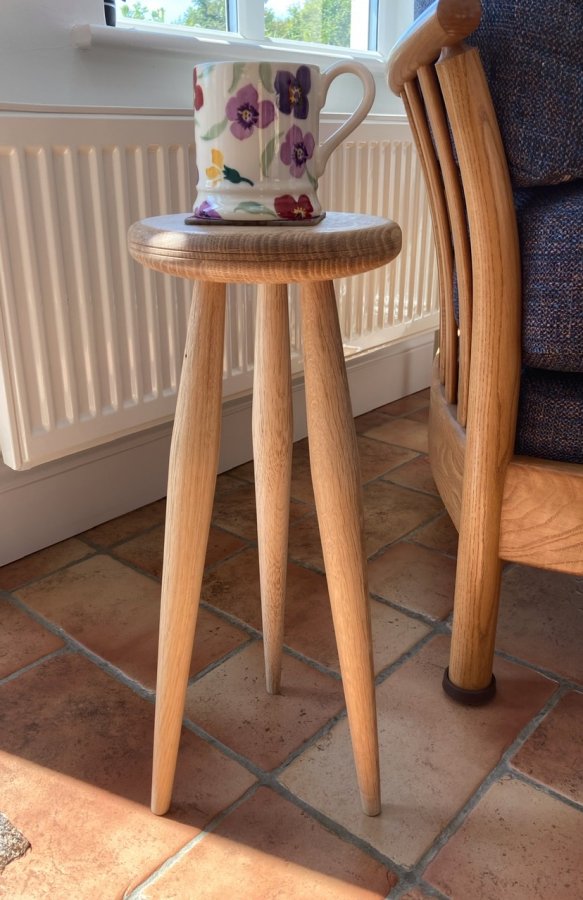 *I think that looks excellent, but I think it could be confused for a stool, and that might cause someone to sit on it and possibly damage it. Maybe turn a slight recess into the top. Just enough to suggest its not to be sat on, nor too deep that any cup would be hindered by a high edge.
A saucer has such a recess, so maybe something along that line.

Leg fixings - I had a small nest of ercol kidney shaped tables, and they made the legs as a through joint(maybe wedged too, cant remember now. But I remember there was a problem with the legs loosening off and needing glued back in. So maybe something to strengthen them.
How are you at cutting wooden threads ?, i know theres kits available- axminster and turning sites. Screwed in would be considerably stronger as an interface, especially if they were glued as well.
Last edited: 2 Jun 2021
P

From a purely aesthetic point of view, I think it would look better if the legs were narrower at their broadest part. That looks a bit weighty in contrast to the delicate feet.

I think the double taper is the right approach, and the diameter of the legs at the ground and at the seat looks right too. Less meat at the thigh is what I'd prefer.

Could you rough turn a piece of scrap into a less bulky leg, to see how it looks? It would be a shame to thin those legs down only to find they looked worse!
J

I think it would look better with a dish shipped top with the edge narrowing to a finer edge say 1/4", the top has too much if a pub stool look to it.

Thanks everyone for the feedback, some ideas to try, I tend to go in the workshop for a couple of hours to get out of the mid day sun, so progress isn’t quick.

I think the pub stool is a great description, I new it reminded me of something.

I‘ll try a making a thinner leg out of pine and see how it looks.

Unfortunately the tenons are fairly deep so I have limited scope to dish or recess the top unless I make then visible but I agree that a thinner profile would make it look a bit more elegant. I’ll perhaps bevel the underside more to lighten the edge.
J

If it matchyws the sofa I'd suggest leaving it.

After a few days you won't find it half as obvious!

Well, I turned a new leg out of some pine and also thinned the top edge out. I think this together with the thinner leg looks a big more elegant and table like?

So fat legs or thin? 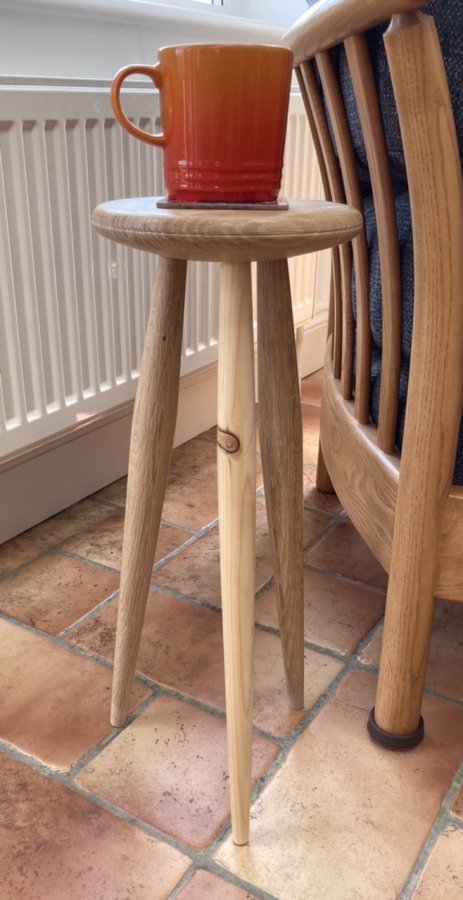 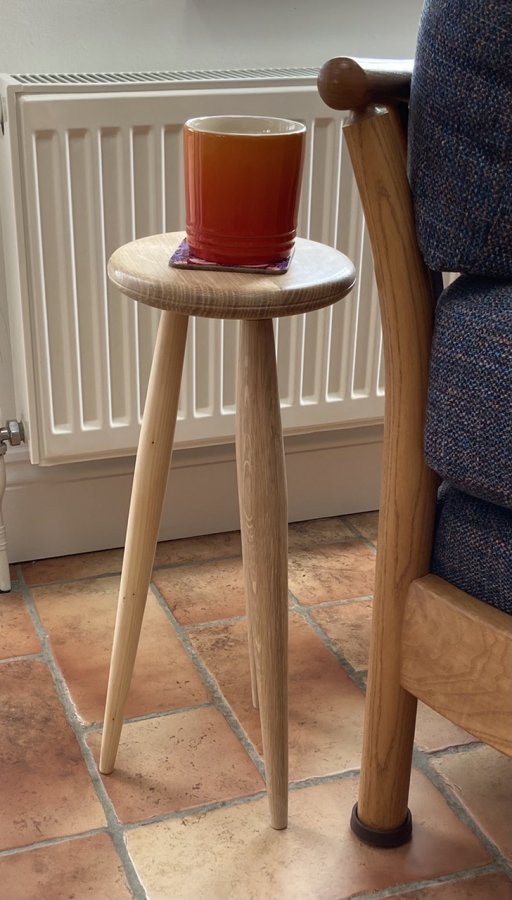 Nice work. A couple of thoughts, as much for the future as for this one. Aesthetics are all very personal and no two people will have the same view, and a lot depends on environment. It goes well with the existing furniture which is important for a job like this.

I wouldn't add anything like another 'deck' - doesn't need it and would spoil the simplicity.

A table always needs 3 (or more) legs so a small top table will always look a bit 'leg heavy', plus for stability you need to have a bit of weight in the legs as they are not spread out very far at the bottom. Legs of this size would work on anything from your small top to about 60cm diameter. Anything bigger they would look weak even if they are not.

If you look at the legs, the 'fattest point' is about 2/3 of the way up. The way you have re-done the top puts the equator about 2/3 of the way up the thickness - that's why it looks better - all of a piece rather than a top in one style and legs in another. It works. I prefer the original fatter legs, it makes the curve and fattest point more obvious now the top is improved.

Thinking about context, the first picture has a traditional rounded edge top and a floral mug, second set has the same shape of mug but a more modern looking single colour. Makes the whole thing 'ercol era mid century' rather than '50's chintz'. I prefer the second mug, I wonder if that's why my subconscious tells me that I prefer the reshaped top? I know you are not selling, but if you were the mug on top would be an important part of the image.

Did you pick the 'fattest point' accidentally or by careful design? It looks almost at the golden ratio which turns up in nature and in architecture from classical times onwards. If you've not come accross it before, google. Avoid the stuff about golden ratios and the perfect human face and smartphone selfie-mangling apps, look at nature, architecture and a calculator. I use a free smartphone calculator, so for example a leg 75 cm long would look right with its fat point at 46cm. It's not quite 2/3. Its surprising how you the intuitive and mathematical approaches often end up in the same place - almost as if we have 'built in' golden ratio appreciation.

I think Ercol did wege their legs in a through tenon. A careful cut, all aligned pointing at the centre, and an oak wedge. My parents had ercol side tables and a dining table, I think on the dining table the wedges/tenons stood slightly proud in a deliberate dome design. This from childhood memory which may be inaccurate 60 years on.

Thanks for the reply. I did a fair bit of photography in my younger days and I always remember the rules of composition and I now tend to naturally place things at about this thirds position without thinking, so I guess it was by unconscious design. I hadn’t considered it for the top, you never stop learning.

Yes, all the Ercol furniture does have through tenons, I was a bit concerned that they would dominate on such a small top so I decided not to go through. It is one of the challenges with making things I struggle visualising and always want to make a prototype to see what it looks like, trouble is it often takes as much time to make a prototype as it does the real thing. Perhaps I should learn to draw.

You’re dead right on the aesthetics, my wife just saw it and loved the thinner leg but thought it would look better with a slightly bigger top. Perhaps it would have room for cake then.

It’s unfinished, just had a coat of cellulose sanding sealer and 400 grit. I was planning on using spray lacquer as it needs to be resistant to drink.
P

More important, your wife likes it. Decision made, I think
R

The thinner legs certainly look better but people may still want to sit on it. A threadbox makes very a very strong joint and will prevent a catastrophic collapse . ! Perhaps for the next one - a 3/4" screw cutter needs a very specific 5/8" hole and so on.
Last edited: 4 Jun 2021
R

I must admit to keeping things as simple as possible at the moment even if it’s at the expense of strength. I’m still making the occasional catch and ruining things so the less there is to go wrong the more chance I have of completing. I’ll add that to my practice list, which is quite long….
R

Just to finish this off, I decided to make a new top more closely following the Ercol edge pattern and made slightly larger. I think it looks a lot better. Also decided to keep the slightly fatter legs. 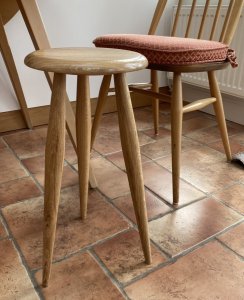 Well done right choice far better to my eye too.

It needs to decide what it is. It's not quite a plant stand, not really a table, nor a stool.

Excellent choice, I was going to say the its more the top needs sorting than the legs. Its now in proportion and looks grand !

P
Looking to do something different