How to describe this oak finish

I am looking for a description of this oak veneer finish. I am not familiar with it. 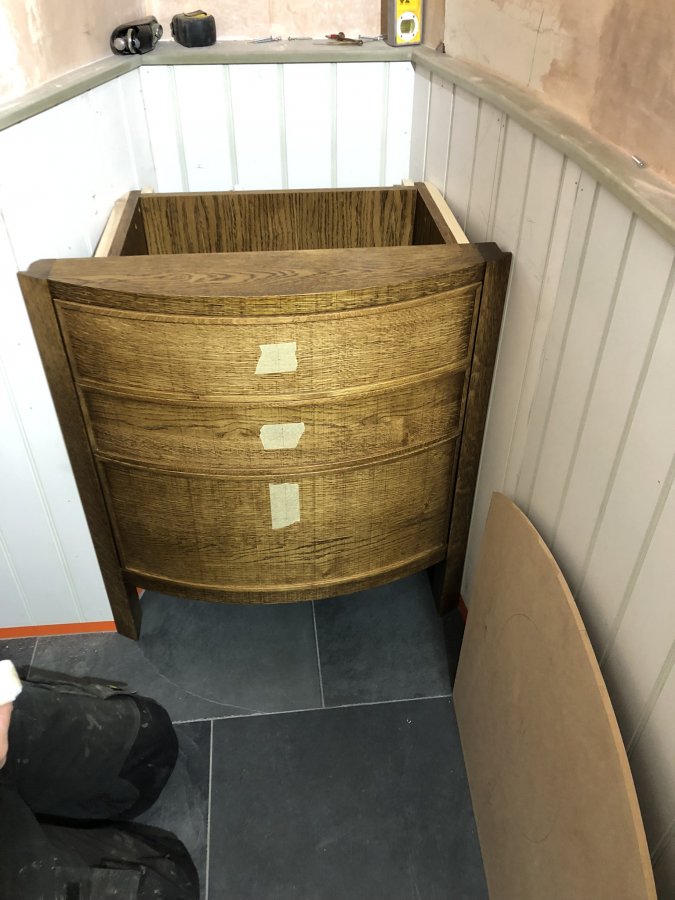 Pigment stain and most likely a sprayed clear lacquer. Slainte.

What about the vertical lines?
J

Have the drawer fronts been cut with a bandsaw ?
J

Looks like it. It's become a reasonably common floorboard finish especially since the Tate Modern. But here with stain.
S

Steve Blackdog said:
What about the vertical lines?
Click to expand...

I didn't say anything about the vertical (cross grain) lines because I thought you were asking only about the finishing techniques employed. But as others have said, they're the result of using a bandsaw and then deliberately not removing the bandsaw marks through planing + scraping and sanding if the material is thick enough, or possibly through just scraping and sanding if it's thin veneer. Slainte.

I wondered if it has been stained before the bandsaw marks have been sanded leaving the stained lines. I am still trying to work out if I like it!
J

I suspect it is that the stain takes up unevenly so accentuates the lines.
C

This appears to be quite similar to that used on older office furniture that I once had to match pieces of.

Fooled around with store-bought stains without success, but I knew I had seen that colour before, and it came to me... a Tar stain on some light pants, that we tried to remove with solvent, leaving a similar yellow/brown stain.

Took a tube of tar roof patch, dissolved several gobs of it in varsol, stirred, let it sit overnight, stirred again, then filtered it. Wiped it on the oak, and perfect match!!!!.

I mentioned it on a list serve, and a refinisher responded that I had rediscovered a refinishers secret stain.

Cheap enuf to experiment with!

Eric in the colonies
M

It's an interesting piece of furniture OP with an unusual drawer configuration. Often, in a chest of drawers the drawers will diminish from the top down but here the centre drawer front appears to be the smaller of the three. To answer your original question, the finish is known colloquially as Badger's Arrse.
C

Seems strange that the bandsaw marks are all in line ! Needs to come out anyway to replace that floor tile

ChrisWiduWood said:
Seems strange that the bandsaw marks are all in line ! Needs to come out anyway to replace that floor tile
Click to expand...

There has obviously been a lot of work to “pattern match” the veneer.
C

Ah yes that would make sense !