How General tools service a bandsaw

Hello folks
Only seen this video yesterday,
A cheesy short how it's made about servicing the bandsaw, mostly regarding the tires
and setup with an interesting jig also


VERY interesting watch for someone who want's to replace "rubber" tires using contact adhesive.
Having had dipped the toe into using some of this stuff only recently, my ponderings were answered before I had even re-considered the question

Talking about the fact that this stuff is applied to both surfaces, and for rubber at least the done thing is to let go off until it's touch dry.
For the application on boots, many are using heat lamps for the water based contact adhesive, like Renia
Not saying that might be a good idea whatsoever for other flammable types, just sayin 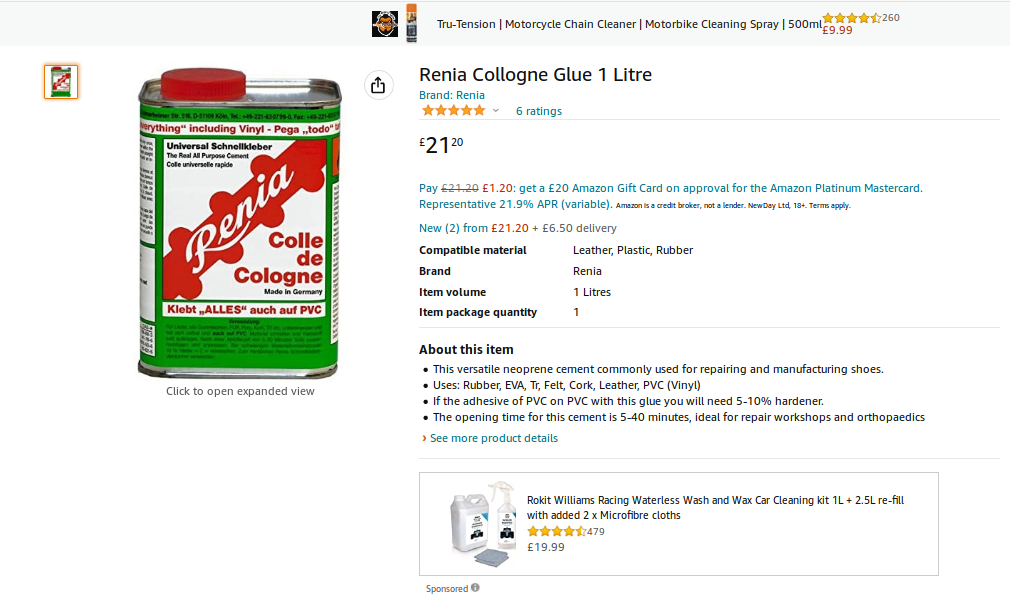 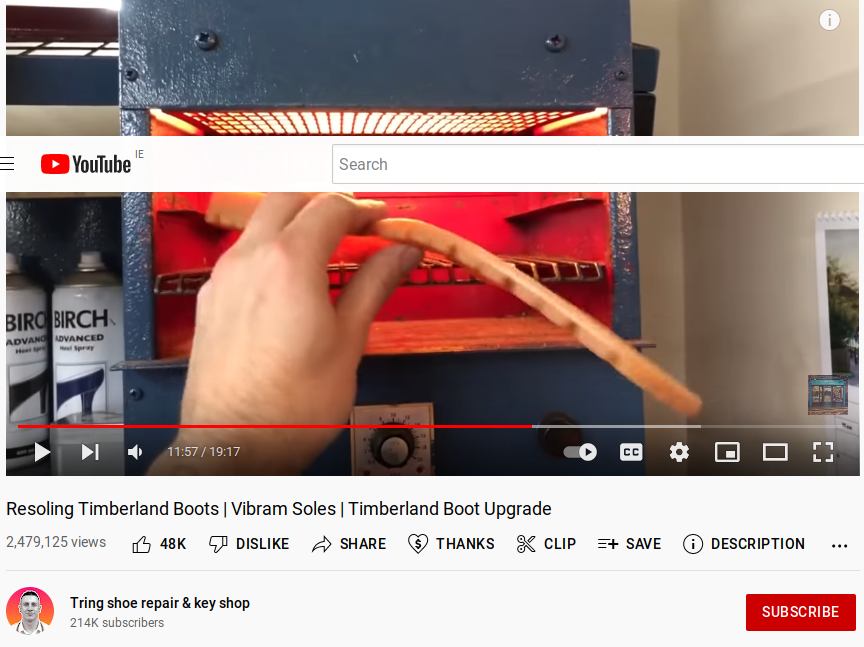 This is normally followed by another application of the same water based Renia.

Now some of the folks on the Creek reckon this particular stuff is the bees knees
I have not looked up anything about it regarding application nor, make up.
Its very expensive so it must be good 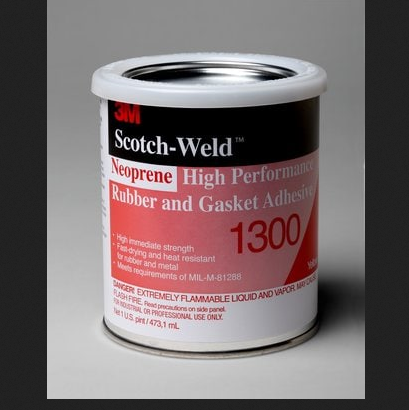 I'd take a mad guess, (as a Joe soap) this glue may have the same or similar properties to
regular contact adhesive, and as said not looked up the make up to note any differences,
Perhaps someone with the know how could chime in here?

Here's some screenshots of the method General use,
Looks like a bandwheel, possible rough casting, and it's being used a tool for the old flipsey doosie.
Something to make note of whilst watching the clip, is that the contact adhesive was applied to the cast iron beforehand, and topped up again afterwards.


Unfortunately there's no information about whether the wheel was warmed beforehand,
not looked up where this plant is in Canada, but at least looks to be summer from the short sleeve. 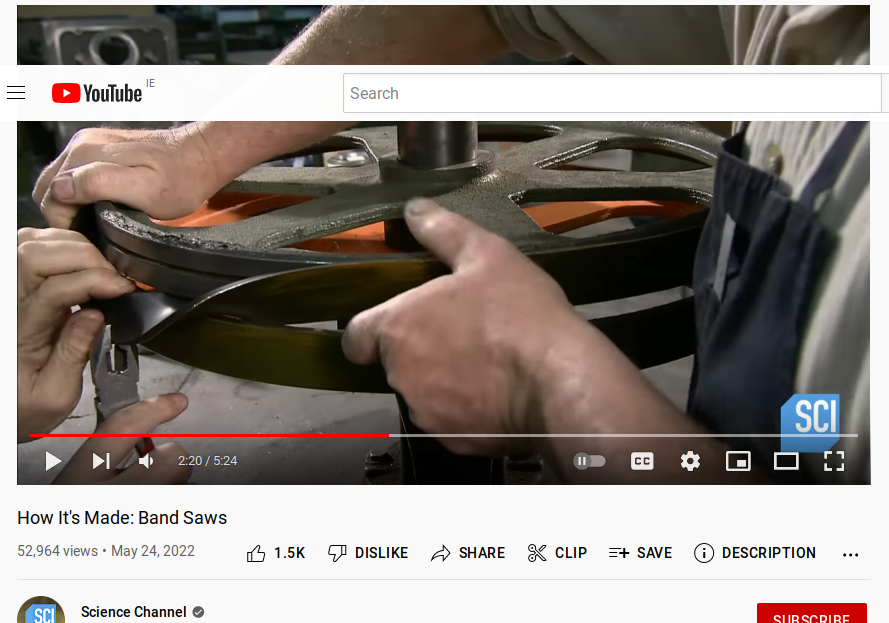 Here's a lovely jig for the job
Disappointing we don't really get to see it being used, and whether this procedure is done with a blade installed and tensioned ala Centauro,
but it does have stops to keep the upper wheel from tipping about giving false readings. 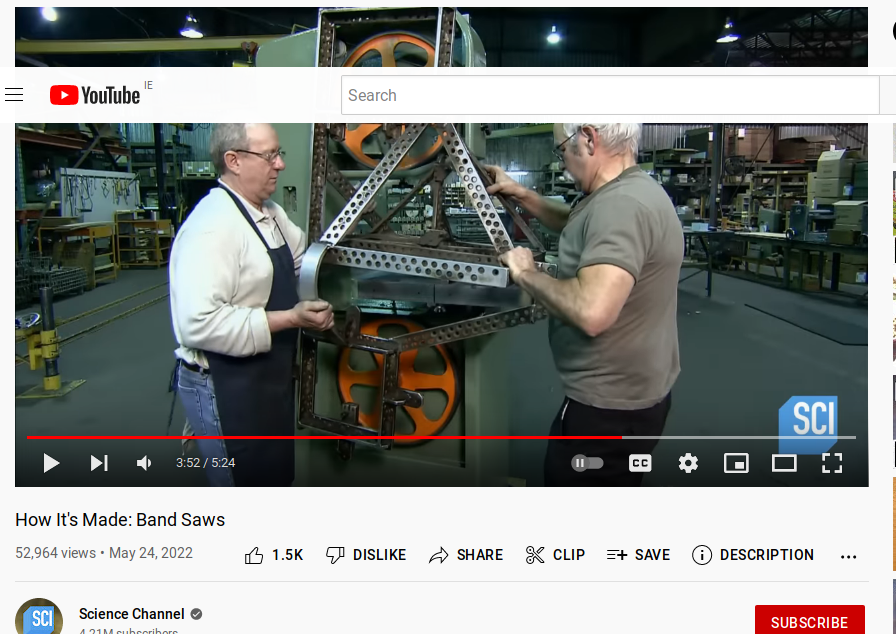 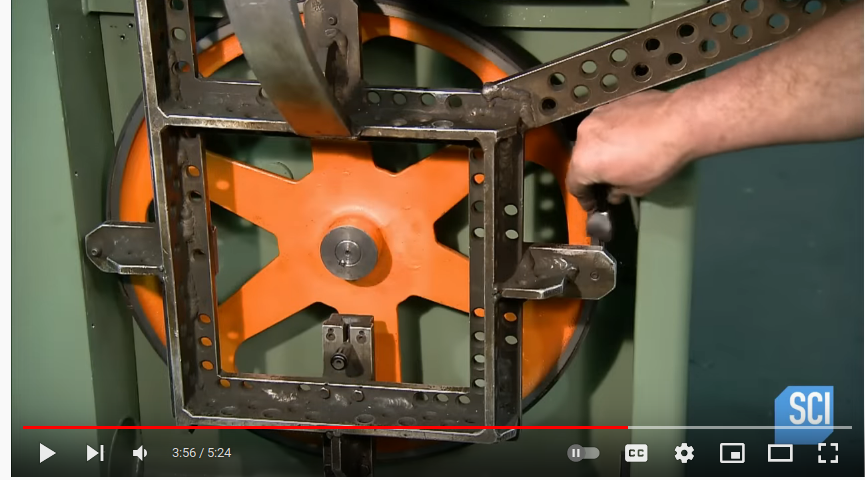 I for one am glad I clicked onto the cheesy video

There's a 2 part loctite product comprising a tube of adhesive (aa330) and a small aerosol of activator. It's expensive but excellent for bandsaw tyres as it will bond rubber and plastics to metal.
Warm the adhesive tube because it's thick stuff and non too easy to spread, once applied evenly, spray with the activator and get the tyre on smartish.
Unlike contact adhesive, it doesn't grab instantly so the process of fitting the tyre is much easier.

@Sideways, can one use something like the dowel method to even out stretching,
or even for possible edge of tire alignment if a flange was on the front?

The bottom tyre on my Scheppach Basa 1 bandsaw came unstuck so I used clear silicone to glue it back on.
The trick, other than making sure there are no bulges, is to leave the silicone to set for at least 12 hours.

@Sideways "Get the tyre on smartish" is the bit that made me chuckle.
After using hot water, I was still panting and kna... ed by the time the tyre
was on the wheel! Certainly no need for any adhesive in my bandsaw!
S

I remember thinking that it's a lot like doing a bike tyre. You get 2/3 of the tyre wrapped around the wheel rim easily then have to fight for the last bit. And as you lever it on, it wants to slide off at two points. I ended up covered in glue !
Much easier with a buddy, wife or child to help. Or use a couple of one hand clamps pinching the wheel rim to stop the tyre sliding off as you lever the last chord over the edge.
I figured lining everything up perfectly with even tension all round the tyre and without letting 2 dry contact adhesive surfaces touch would be so hard I didn't want to attempt it. An adhesive with a few minutes open time means you can get the tyre on without stretching it as much then push it to align on the wheel all round. Silicon would be good in this regard but the loctite formula I believe gives a very much stronger bond.

Raised panel doors and yacht varnish tips for the weary.
2 3

Graphite stick, an under appreciated tool