How do YOU present concepts to clients?

How do you go about presenting clients with a design? Do you use technical drawings, a 3D CAD model (possibly even a full 3D rendering if you're fancy) or are you lucky enough to be a competent enough artist that you feel confident enough offering up a hand drawn sketch?

Be interesting to get folks thoughts.

Back in the days when I did that sort of thing – retired now – the work mainly came in three forms: repairs, reconstructions/replicas and new stuff.

I would only do repairs if it could be done properly; sometimes the stuff was best left alone and it was important that I could tell them that.

The replica stuff came mainly from a local builder or two who repaired and restored 1960s vandalised houses, usually hard-boarded stairs, doors etc., so I made replica spindles/balustrades, carved newel posts, new doors to match damaged originals etc. That was interesting work. I didn't need drawings - I worked from the original bits as far as I could.

As for new stuff, I usually tried to get the client to steer his own course – a photo or drawing of what they thought they wanted from a magazine or something they'd seen. From that point it was possible to gauge if it was within both my capabilities and what they were prepared to pay. In the main it was bookcases, tables …… I made lots of refectory style tables, cos in those days, that was what they wanted.
In the main, I usually talked to them and listened to what they said. I found that it was crucial to tell them straight if what they wanted was either possible or affordable. I generally sent a proposal in writing, asked for material cost (refundable) in advance and gave them a realistic completion date that I kept to. If it took three months, that was what was agreed.

I was fortunate, in that I had a few clients who came back on an irregular basis. One or two backed out, but I traded on the possible, not promises.

Not everyone’s cup of tea, but that was what I did. Drawings, when needed, were generally free hand. I used to get the client to come up with a picture of what they'd seen somewhere..... CAD wasn't invented then.
It was, as far as I could see, 'bespoke'. A much-over-worked word.
Last edited: 11 Jan 2021

Argus said:
I found that it was crucial to tell them straight if what they wanted was either possible or affordable.
Click to expand...

Ha, yes I think whatever work you do for them, some people will have quite lofty expectations of what you can do for them in the budget they have in mind!

Plus, if they already have a pretty good idea of what to expect from you, not a great deal of visual communication is needed.

As far as I'm concerned, whether anything I make is for a client or just for me, the drawing is the most important starting point.

Always at least 2D (third angle) and often 3D using SketchUp. Though the 3D version may be partial and done just to clarify a potential issue, it is often also 'exploded' - particularly for a complex object - 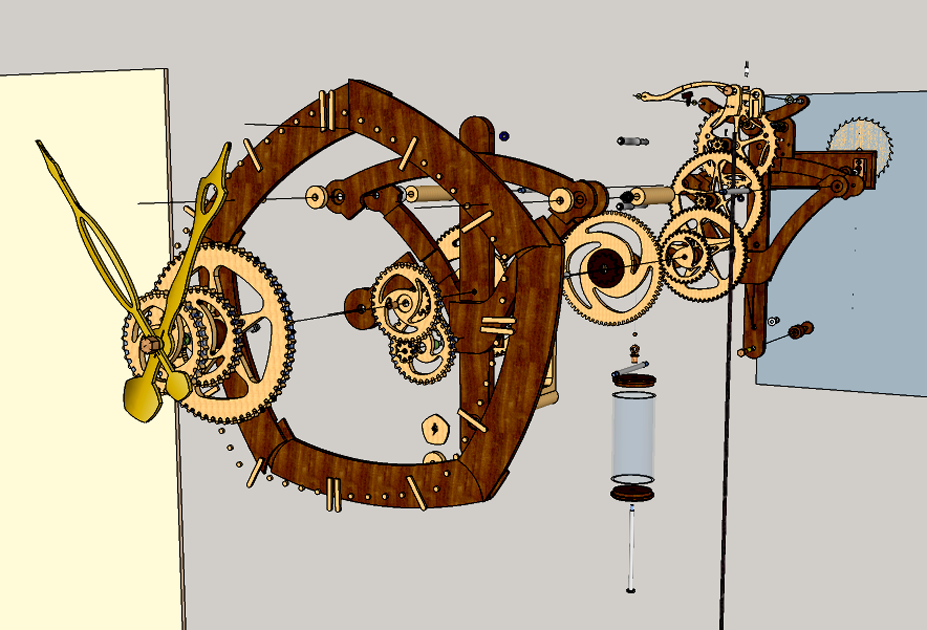 It depends what it is really.

If its just a simple thing (like some shelves in an alcove or something) I just do a quick sketch with the client on paper.
It is good to do this anyway even for more complex things.
You can quickly rule out definite no's and find out what they really want, often they start off thinking they know but as discussion and design progresses you end up somewhere quite different.

If its a more complex design I like to do a 3d model, this gives you and the client much more to go on.
Proper scale and shape are much easier to discern from a model than a 2d drawing. Also you can "look around" it or move it in virtual space.
If you model the room or part of it it gives more reference.

I use fusion 360 at the moment but sketchup and others are good as well.
The good thing about parametric 3d models is, if the client says they want it taller or a bit more curved, 4 drawers instead of 3 etc.then you can adjust the model till its just right.

I don't often do a full rendering, usually the basic model is enough, but if it is something really big it can be useful to give a better understanding of lighting etc.

J-G said:
As far as I'm concerned, whether anything I make is for a client or just for me, the drawing is the most important starting point.

Always at least 2D (third angle) and often 3D using SketchUp. Though the 3D version may be partial and done just to clarify a potential issue, it is often also 'exploded' - particularly for a complex object -
View attachment 100679
Click to expand...

Crikey! Good model! I have used SketchUp in the past so I know that must have taken ages.

And yes, I'd always work from some sort of drawing at the workbench. I guess if it's the same one you show your client, then there's little chance of crossed wires, or misunderstandings. You're making exactly what you've shown them, in other words.

Ollie78 said:
I use fusion 360 at the moment but sketchup and others are good as well.
The good thing about parametric 3d models is, if the client says they want it taller or a bit more curved, 4 drawers instead of 3 etc.then you can adjust the model till its just right.
Click to expand...

That's interesting. I have a basic understanding of 360. What I like is that you can model and do technical drawings in it. I guess you have to use some 3rd party rendering software if you want to go down that route? But for 3D models, it's great. I feel it's the kind of programme that you don't realise how good it is until you put the time in to really learn how it works!
O

I used to use sketchup but changed to Fusion 360. It was a bit of a headache to change but now I prefer it. I find mostly the in built colouring options are good enough to show people. Mostly a photorealistic render is not called for. If I remember rightly it does have an inbuilt option somewhere. There are plugins too or you can export the model to a different programme.

Almost everything I make these days involves creating a 3D model first using Rhino 7 CAD.
From that I can produce a rendered output of the finished item and also 2D parts for cutting out.
Some of the 2D parts can be cut on the cnc along with any 3D parts required, of course a lot of the parts can be made by hand.
E

It depends on the job, with furniture I only do a few pencil sketches, but with structural kinda things I draw it in SketchUp and like to provide a PDF of the drawings as well as reference images so the client can get an idea of what I'm thinking and stuff.
D

I have an A4 size sketch pad. Mostly freehand with pencil. I don't have time to 'hold their hand' and 'walk with them' to a solution.
They might expect this, but few will pay you for your creativity and time.
Oh, and never email them any drawings before a down payment. There are unscrupulous clients who'll take said drawings and shop around for the most favorable quote, paying you nothing for your effort.
If they insist on the above mentioned 3D 2D Sketchup stuff, I reffer them to a few architect/ designer studios I've worked
with in the past. They soon set them straight.

dzj said:
Oh, and never email them any drawings before a down payment. There are unscrupulous clients who'll take said drawings and shop around for the most favorable quote, paying you nothing for your effort.
Click to expand...

I was at the other end, presented with a requirement and had to deliver a solution. The requirement could be anything from a fag packet drawing to several A4 folders of words, sketches and definitions.
A

Funny thing, all this…

After getting the dimensions sorted, I always used an old-fashioned rod.
If I could, I signed and dated the rod and built it in somewhere out of sight. I got the idea for that from an old 19th C dresser that I saw in a junk shop in Tenby. The rod was part of the top shelf….. all the chisel-Roman numeral-marks were still visible at the back.

I always used to encourage the client to visit (by agreement and time) to see how things were getting on. On one occasion I was making a large bookcase/cabinet with paneled sides, set loose in grooves. The client mentioned that it was for his wife’s birthday which was imminent in a month or two. I suggested that he write something private about it on a piece of paper, fold it up really tightly in a long strip; we wrapped it in clingfilm and I cut a deeper recess for it inside one of the grooves. It’s still there, as far as I know. Sealed in place. Maybe it will never be seen.
Who knows what he said or if it will be found?

On another occasion, I was asked to make eight twin doors – one full width the other half width for a lady in the Berkshire/Hants borders. She had a really up-market 1960s Scandi-design bungalow which at that time – about 20 years ago – had a refit including a top-range kitchen…. I could never have made that – it was all in solid Oak and a real beaut.

The only problem was that it showed all the house-doors up as being 25-year-old-stained Scandi-design pine. It didn’t occur to anyone to think of this until it became obvious. The doors she liked – the Scandi-paint job, not so much. So, I made and fitted exact copies…. In matching Oak.

Long story short, I kept in touch after I moved away, and had a note a couple of years ago that the house was on the market. So, I had a look at the Estate Agents’ particulars and there in all the pictures and the video were my old doors.

I use Fusion 360 for new stuff for clients and provide a render and the 2D drawings in pdf format for approval before I start. I use Fusion 360 to produce drawings and a BOM for stuff I do for myself too. I find the design process helps me work out what I'm going to do / how to make it. I've even used this approach for things like worktops, to confirm dimensions with the customer.