Holding the lids of boxes for working

I like to make small boxes like the one shown in Figure A. Note, the finial is inserted afterwards, so can be ignored for this discussion.

But the the problem I always have, and haven't found a good solution for, is holding the lid so I can do a continuous cut and finish of one entire surface, i.e I want to finish the flat part as one cut, and also the hemispherical top as one cut. As shown in Figure E

What I currently do is form the lid from a spindle blank held in the chuck. I have the base of the lid on the end of the spindle so I can size it up to the opening of the box. I then sand and finish the flat part and a little of the curve. Figure C. This is then parted off.

I then put the parted off piece into a jam chuck and finish the rest of the curve. Figure D. The problem is that the part of the curve being held in the jam chuck now can't be finished as a continuous curve, and I inevitably get a discontinuation at that point. Not to mention the finish looks slightly different as it's been sanded in two different stages.

Just wondering if anyone knows of a better way to do this?

I have experimented with adding either a spigot or mortise as in Figure F which work, but they serve no purpose in the final piece. I would rather a clean flat bottom to the lid that I can decorate with texturing. 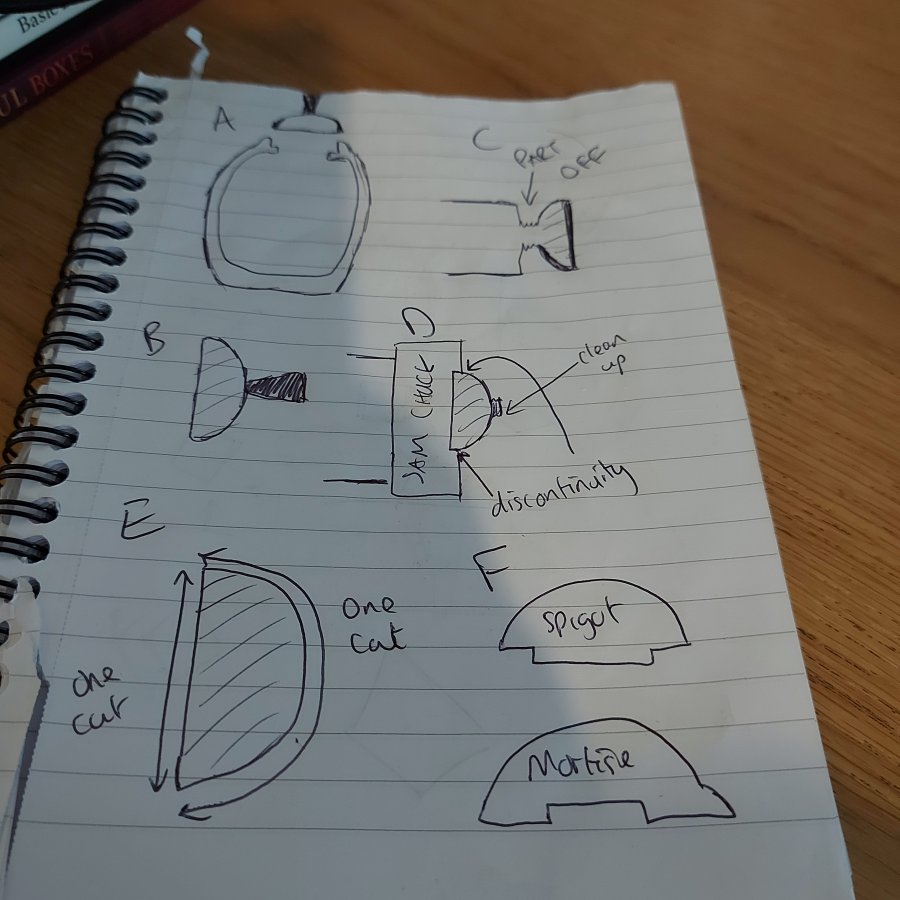 If you go as far as you show, in diagram D, then stick the flat face to a small block held in your chuck, light cuts to finish and then sanding should work. Suggest hot melt glue or strong double-sided tape to attach it.

Above sounds sensible and looks like the only way to do exactly what you want. Getting it properly centred on the block might be a challenge, I'd most likely mess that up.


How about at "B" you drill say 10mm hole part way in, part off. glue in a dowel of contrasting wood, dowel long enough to protrude into small chuck jaws, finish the top then part off the dowel flush with the base of the lid, a contrasting decorative feature.
W

maybe use a wooden screw chuck with a long screw ?

top disk in this set… 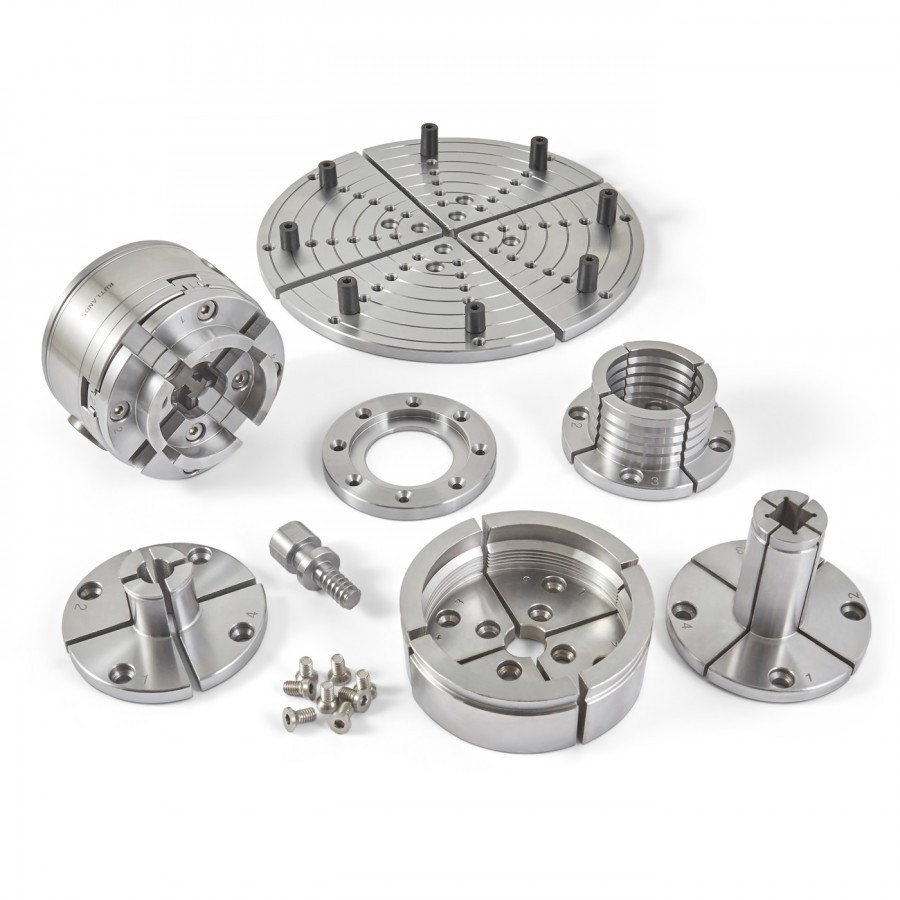 I’d go with the spigot idea and completely finish the top including a small central hole to hold the finial.
I would then reverse the lid and hold it using the finial hole and a screw chuck or a dowl while I turned off the spigot.
An alternative is to turn a thinner spigot and either clamp that in a chuck or use a screw into it then saw it off afterwards and sand flat.
Last edited: 9 Nov 2021

At home I’d vacuum chuck it but realise not everyone has access to that option.

failing that, a shallow ‘cup’ jam chuck may work or alternatively make some wooden ‘soft jaws’ on the basis you can turn the top dome, and bead to 5 mm into flat face one way, then part off and hold on the bead in soft jaws to finish turn the base.

third option is to develop your mortise ideas you only need 1/16” to expand into so make it part of a design of some beads / texture on underside and expand into fine recess and use light cuts on domed lid.

hope above helps, post some photos of finished item - sounds a nice project.

Thank you for the suggestions guys. I shall give them a go!

I'm not sure I understand the idea witht he colejaws though? the rubber stoppers are always going to be in the way?

Combine the double sided tape with the jam chuck. The jam chuck centralizes and holds the lid and the tape also holds it. When cutting the curve, continue the cut into the jam chuck, removing the wood of the chuck. At this stage the lid is held only by the tape, but you should be able to get a continuous curve with careful light cuts.

But I think I see a design problem. You carefully size the lid to fit the box and then want to make a continuous cut to the edge of the lid - which therefore must make the lid diameter smaller. It won’t then fit the box. ??

Bob Chapman said:
But I think I see a design problem. You carefully size the lid to fit the box and then want to make a continuous cut to the edge of the lid - which therefore must make the lid diameter smaller. It won’t then fit the box. ??
Click to expand...

transatlantic said:
Thank you for the suggestions guys. I shall give them a go!

I'm not sure I understand the idea witht he colejaws though? the rubber stoppers are always going to be in the way?
Click to expand...

You would have to cut a little of the curved side first before reversing it to avoid hitting them, but nothing central to hold which might help over some of the other options?

Turn the bottom of the lid, cut it to be a good fit to the opening in the box then turn the top of the lid with it attached to the box. No need to make it more complicated!
S

Paul Hannaby said:
Turn the bottom of the lid, cut it to be a good fit to the opening in the box then turn the top of the lid with it attached to the box. No need to make it more complicated!
Click to expand...

That's exactly what I do, it works well especially when forming the lid contour to the box body.
I turn spigots on both ends of the blank and using a thin parting tool (if you want to match up grain), remove the lid section. Reverse holding the lid form the spigot and that will be the lid base and cut to a good finish, a little chamfer or round over on this spigot will help seat the lid into the box body in the next step.
Remount what will be the box body and turn the mortise for the lid. Take care with sizing, I make it tight enough that the lid spigot will enter with a little help from a mallet. Once it's in and seated square, you'll be good to turn the box body and lid exterior. I finish off the lid at this stage.
A sharp tap from the mallet should be enough to remove the lid allowing you to hollow out and finish off the box.. the photos show how well this works when contouring the lid to the base... Kind of

You can adapt this method for flat lids, I prefer to turn a spigot on the box body and a shallow hollow in the box lid in this case. 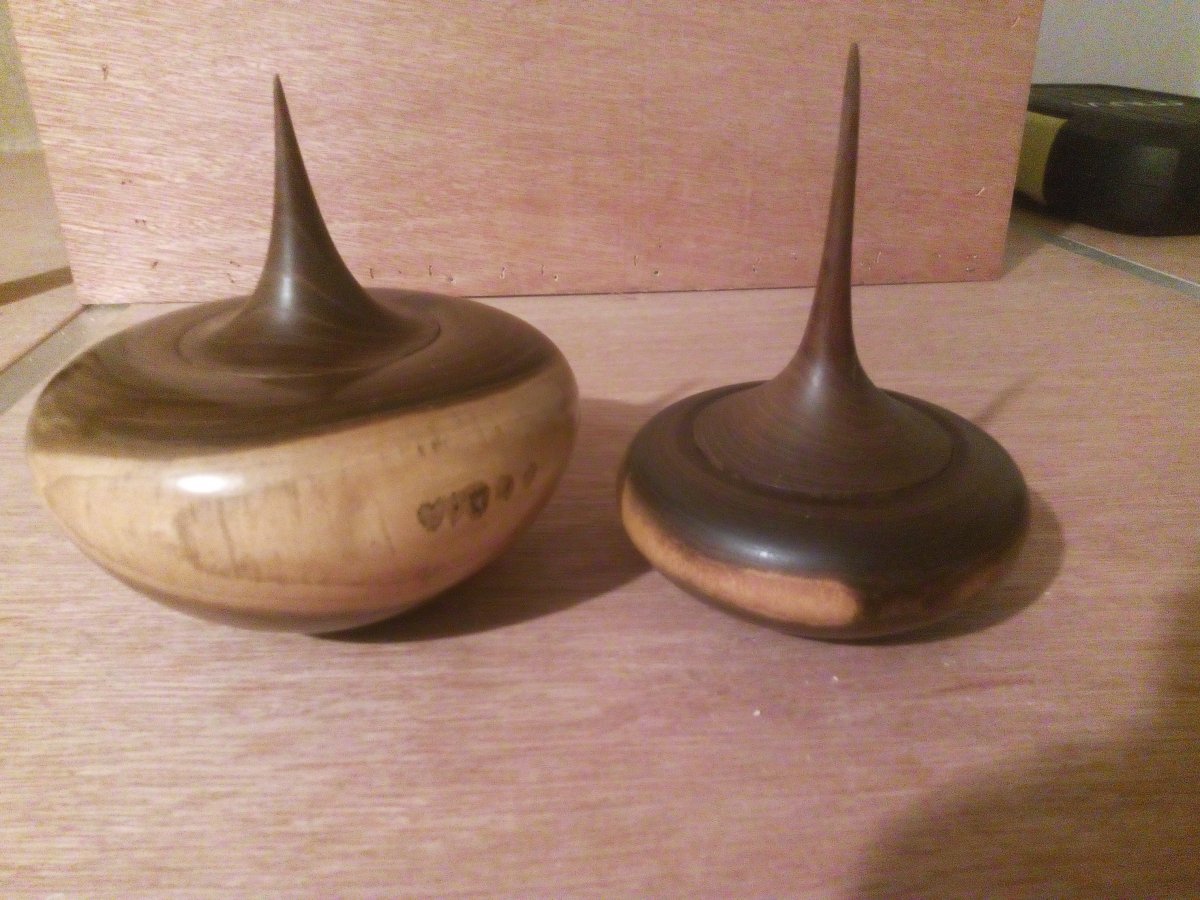 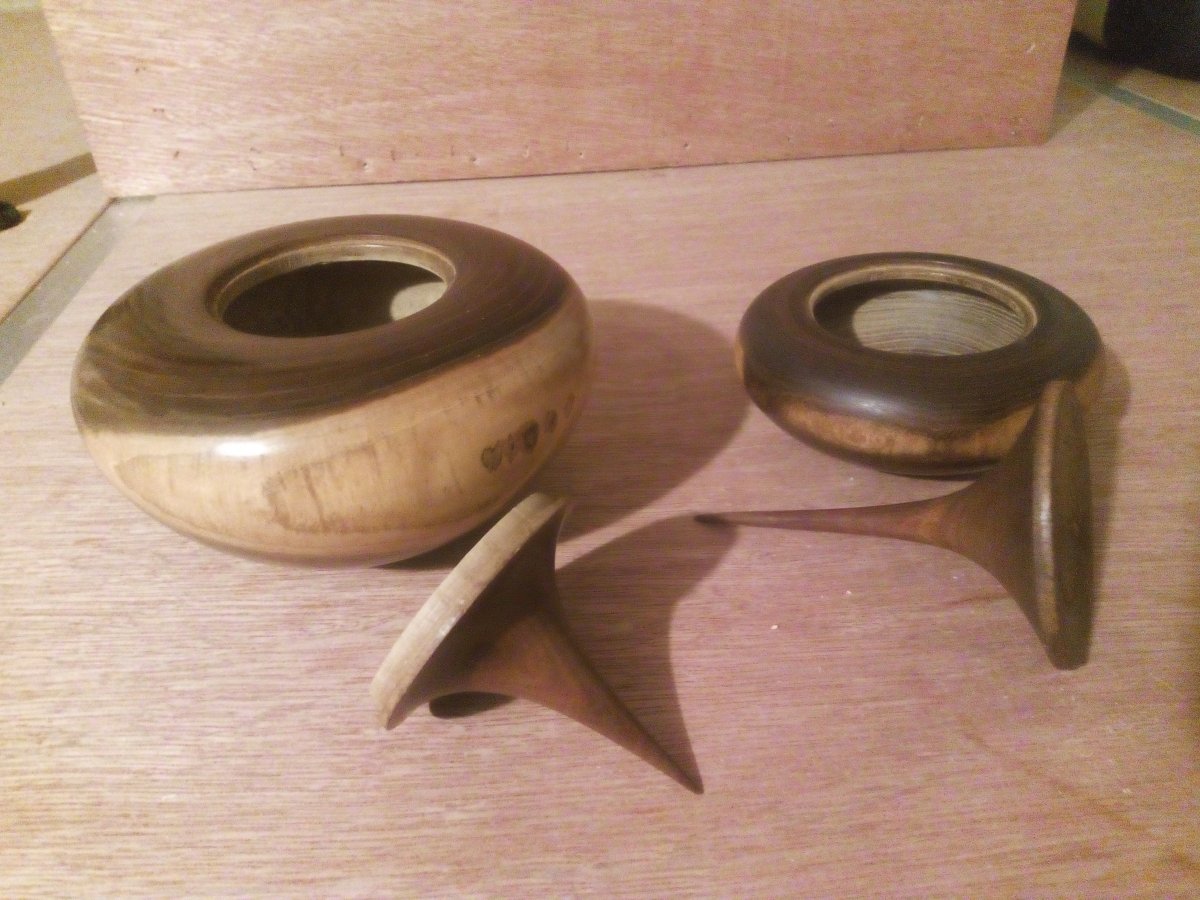 So what I probably didn't explain very well is that the lid does not follow the same contour as the base. There is a roundover on the lip of the base.

I made a mistake on the one below, the lid is supposed to sit below the rim. But you get the idea. Trying to shape it whilst jam chucked in the base would be tricky. 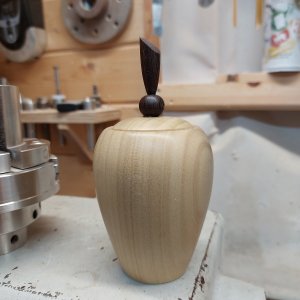 Ahh, I see what you mean now. I'd be inclined to try a screw chuck in the mortise for the finial with a wooden spacer for support between the chuck and lid.

If you want a proper fitting lid, there needs to be a straight part to mate with the base. If you don't want the straight section or proper fitting lid, just turn 75% of the curve on the lid before you part it off and do the rest with it in the top of the box, held in place with a live centre.

Thanks. I'll be the first to admit that I have a habit of complicating things that don't need complicating.