Holding cylinder in vice for boring, what angle to make jaws.

Finished making these holddowns,well enough for testing anyway.
I didn't make any relief on the underside, might do yet but it seems solid as frig so far.

Forgot I had this wee clamp, as I was using it for the table crank for a good while. 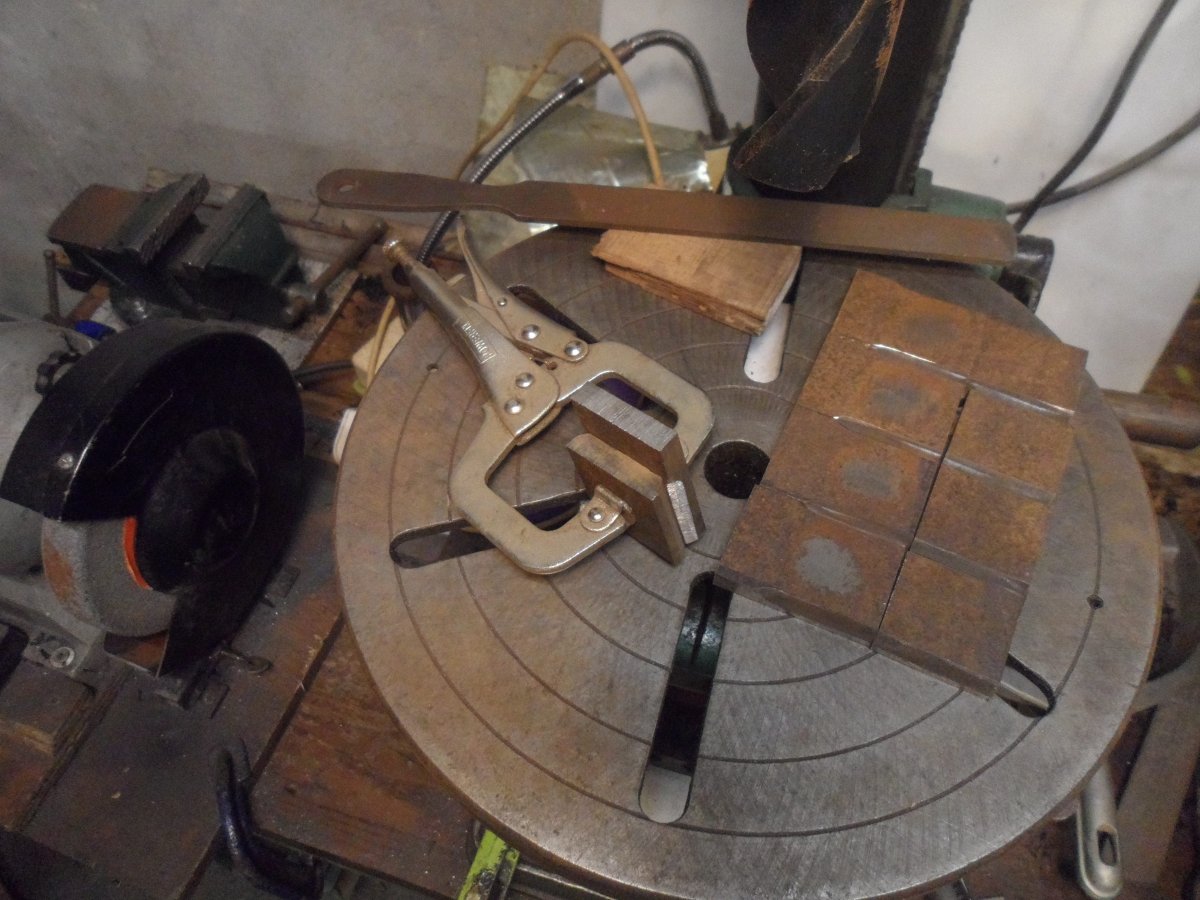 Bought some new 2.5mm rods for the job, seems I could have used the low setting as I melted the edges of these blocks. 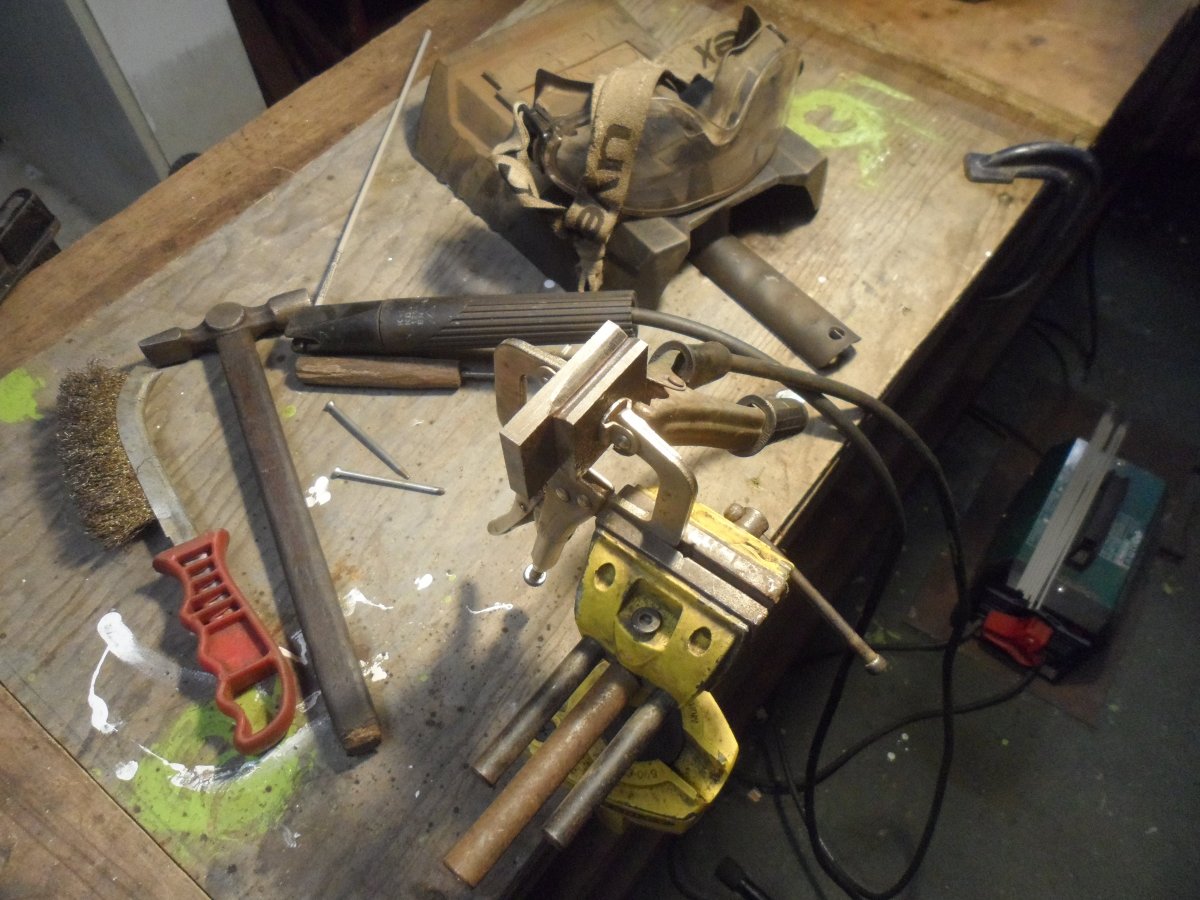 Probably be just right for something with a bit more mass, but not for these wee blocks.
Excuse my terrible welding, as that was likely more than half the problem. 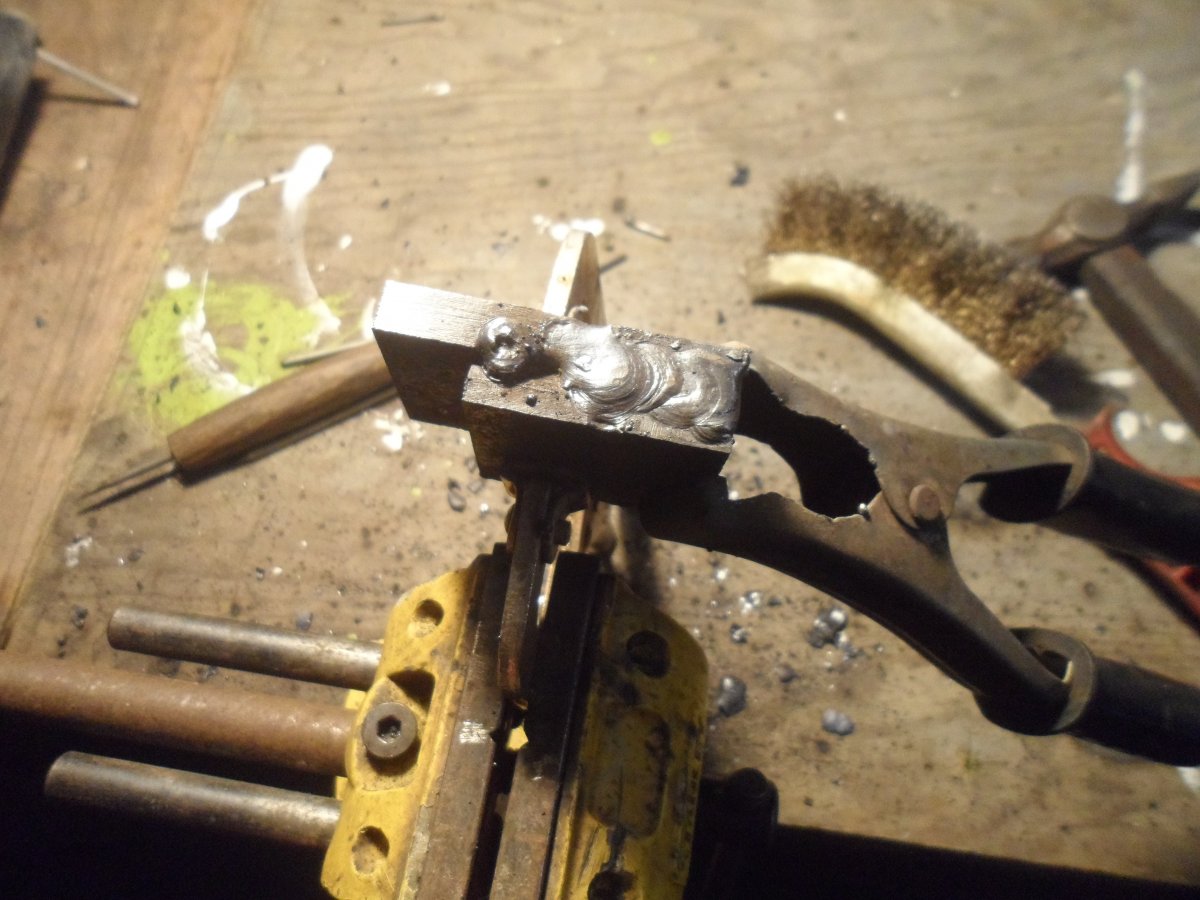 Still enough reference to get some holes made, and definitely upped my skills slightly today!

One can get a vastly superior centre punched, whilst using an anvil (sledgehammer) sitting on the bench leg for support, I just use a masonry nail for the job, was thinking of buying a fancy thing, seems no need now.
Stopped using wee tiny drills for getting spot on, in favour for a somewhat larger bit
whats short and stout from grinding.
These holes were difficult to tap, using a ratcheting tap wrench with 4" tommy bar.
Swapping the handle for one probably 12" was a hundred times easier, but not to be used until one gets the thread started, since the short one is less obstructive when needing to lean down on the tool.

I didn't have any fancy bolts with shoulders for a tight fit, so tapping and thread bar it was. 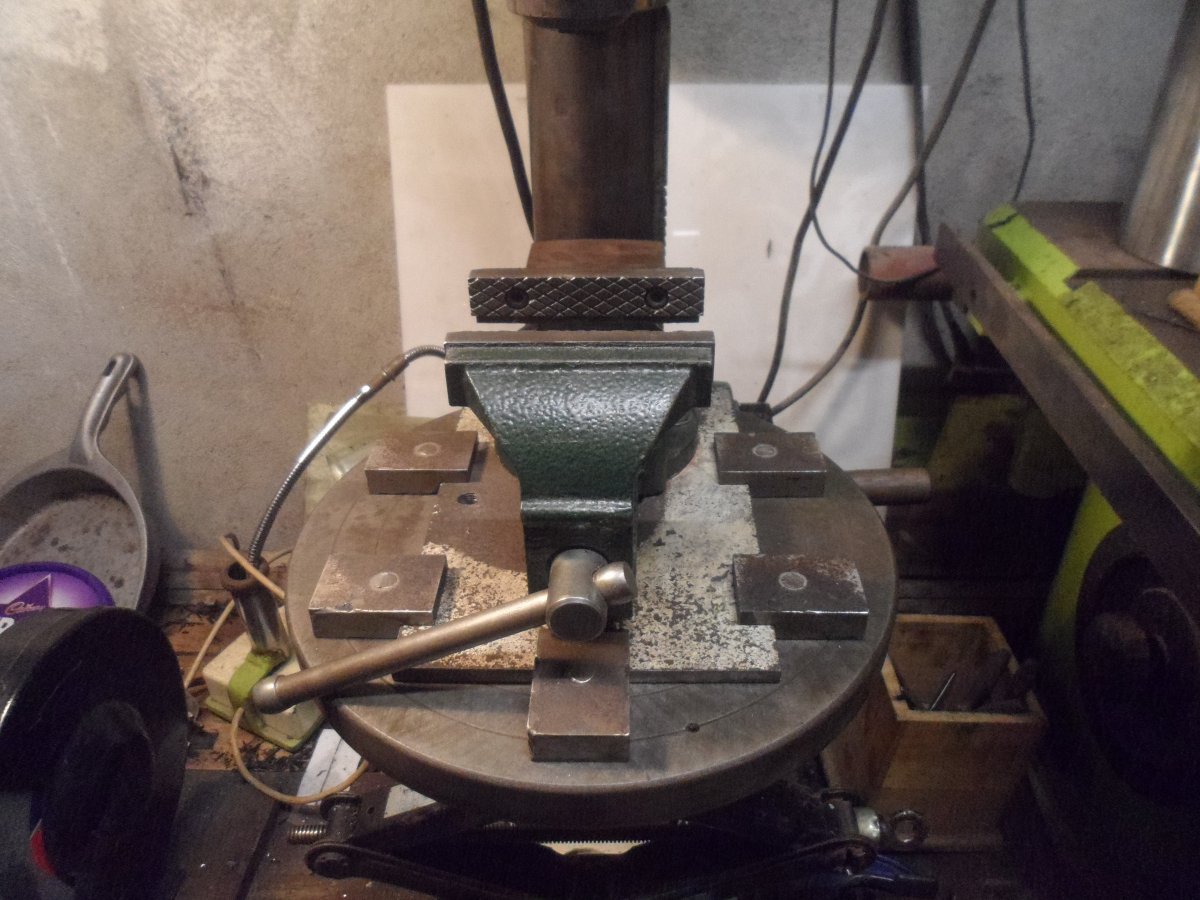 Seems like the vice will stay put now, and no fouling of any clamps might be a two for one, or possibly even three for one!
Now that wouldn't be bad for a 40 pound drill!
Thinking I need to get some belts for me machine at this stage, not wanting to make life difficult for myself, but as is begs the question of how accurate this possibly could be.
if you can't make it accurate then make it adjustable kinda thing.
Eager to see how I get along with this, might try on some scrap, though some more things need doing first.

If that works great, if not, nearly prepared to start getting on another step of accuracy,
have a once over of the drill again, might be a deep rabbit hole, but hopefully can come out with wallet unscathed. 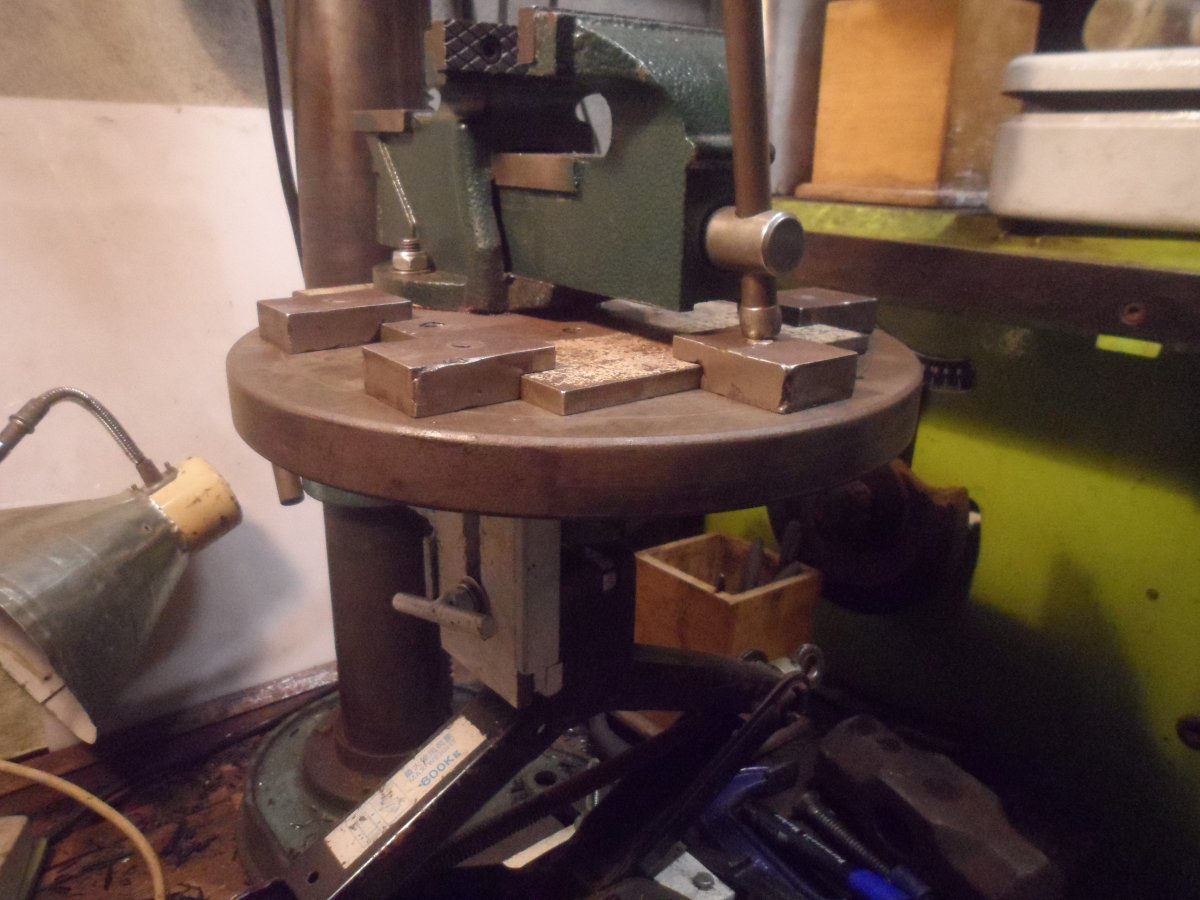 Thought I'd give an update on this after some experimentation
I really thought the gib or whatever you call it I made recently would have made things perfect. 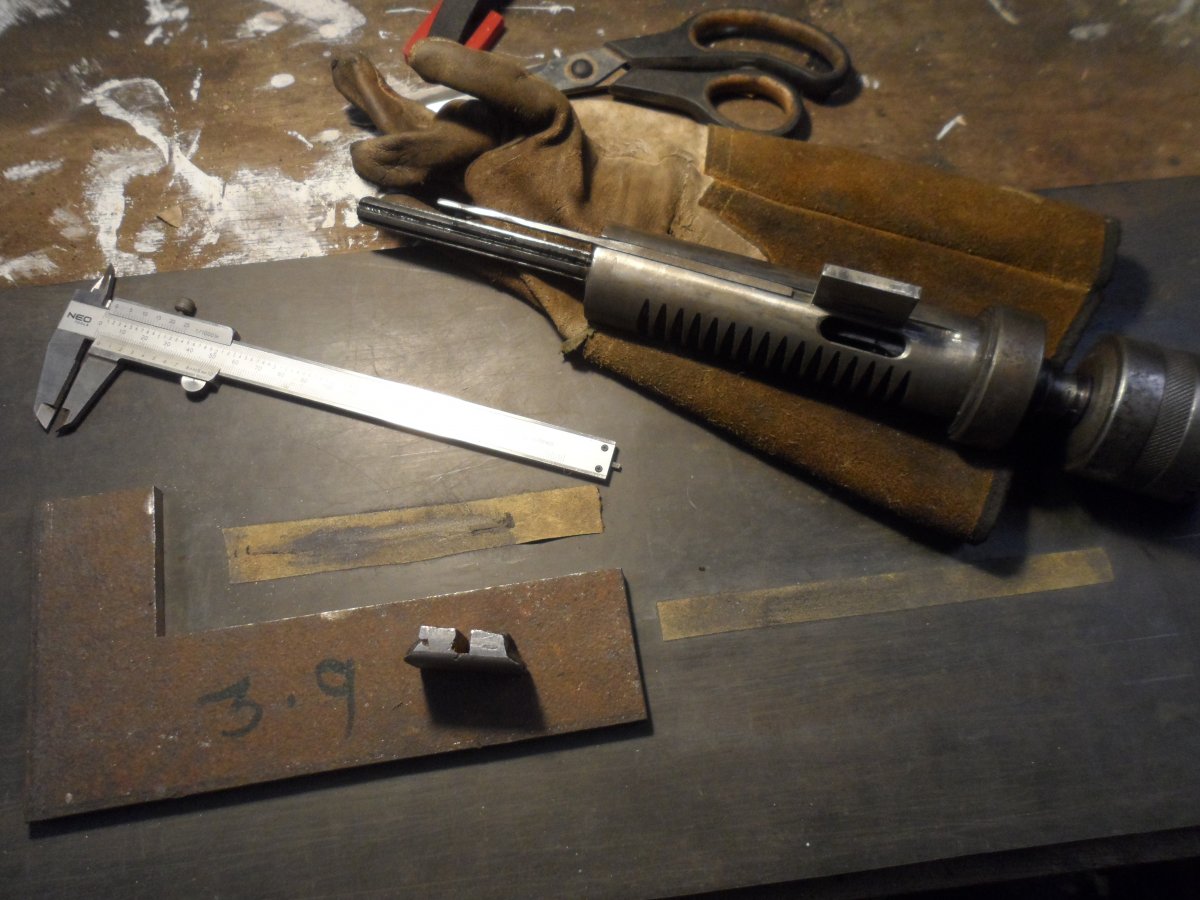 Pity I'm all out of this stock to do some more experiments with.
Spent some time doing various things of interest,
spinning the table I hoped would align everything or even be utilized for enlargement to some degree, well not without more looking into, which I didn't venture down as of yet.
An interesting proposition,which may be made to work, but not without some in depth looking into as all will move when cinched down, and that's even when the table fairly tight and difficult to spin in the first place. 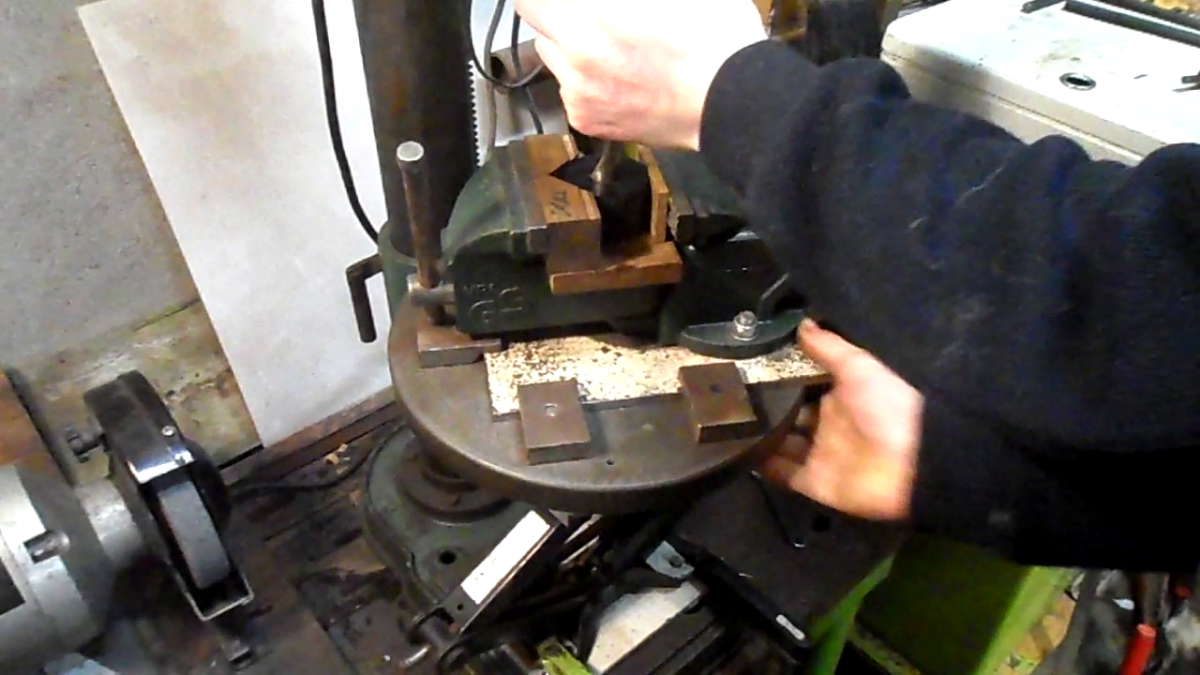 Some initial tests attempting to get used to the method, or jig....
debatable, as one could just use a wall or vertical thing/big square clamped up
for this method, should you agree the scissor jack can be eliminated out of the variable part and can be seen as sound...
(not that I suggest the car jack is suitable

)
I reckon I could have progressed a bit with a bottle jack instead, and looked into table support


The third is somewhat less informative and another shot of getting used to the method,
slightly differing in the lateral pressure on the table whilst locking down


Some things I left out in the last like support for the vise, which likely needs some inspection,
but that would only be after figuring out what the issue is now.
Only getting back to this recently and having another go at producing the results I attained in the most recent. 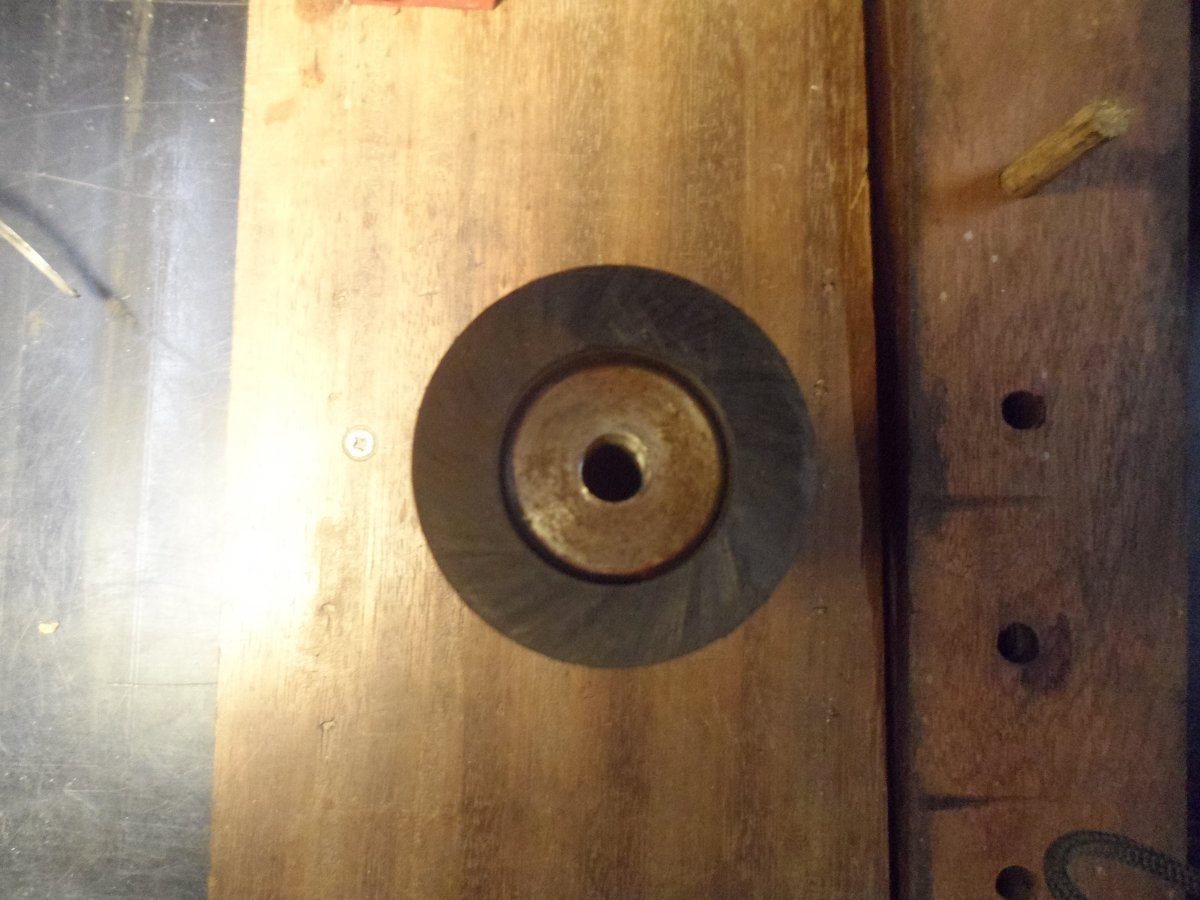 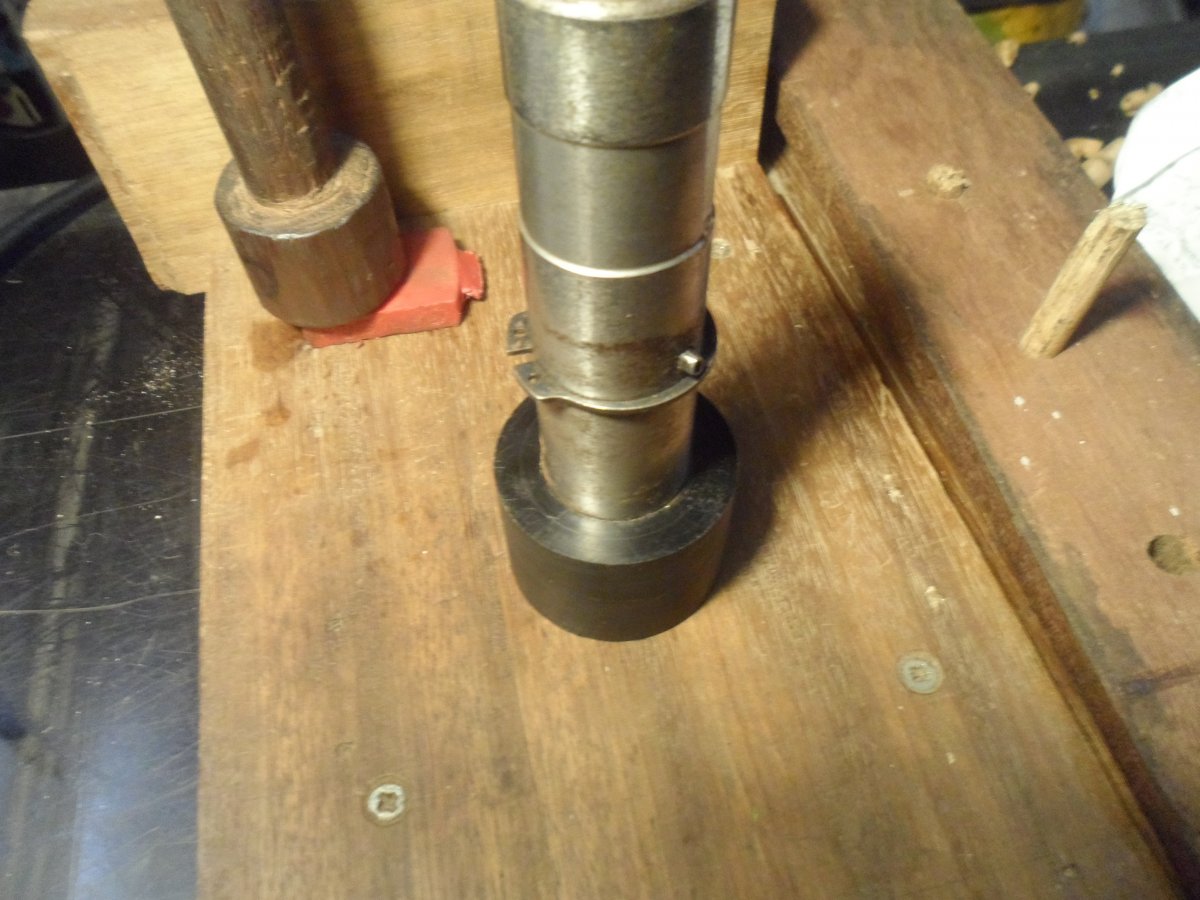 Trouble was the rest of the stock was bored to a size bit I didn't have, and too skinny a hole for a mandrel to dress the bottom.
Just some more wee variables needed sorting and it might be possible to index off the the previously drilled stock, and swap out the work out in the vise, which didn't work as I hadn't been aligning the jaws to one side due to the vise design, which I guess is being blamed for the variables but I think something else is at fault to a larger extent. 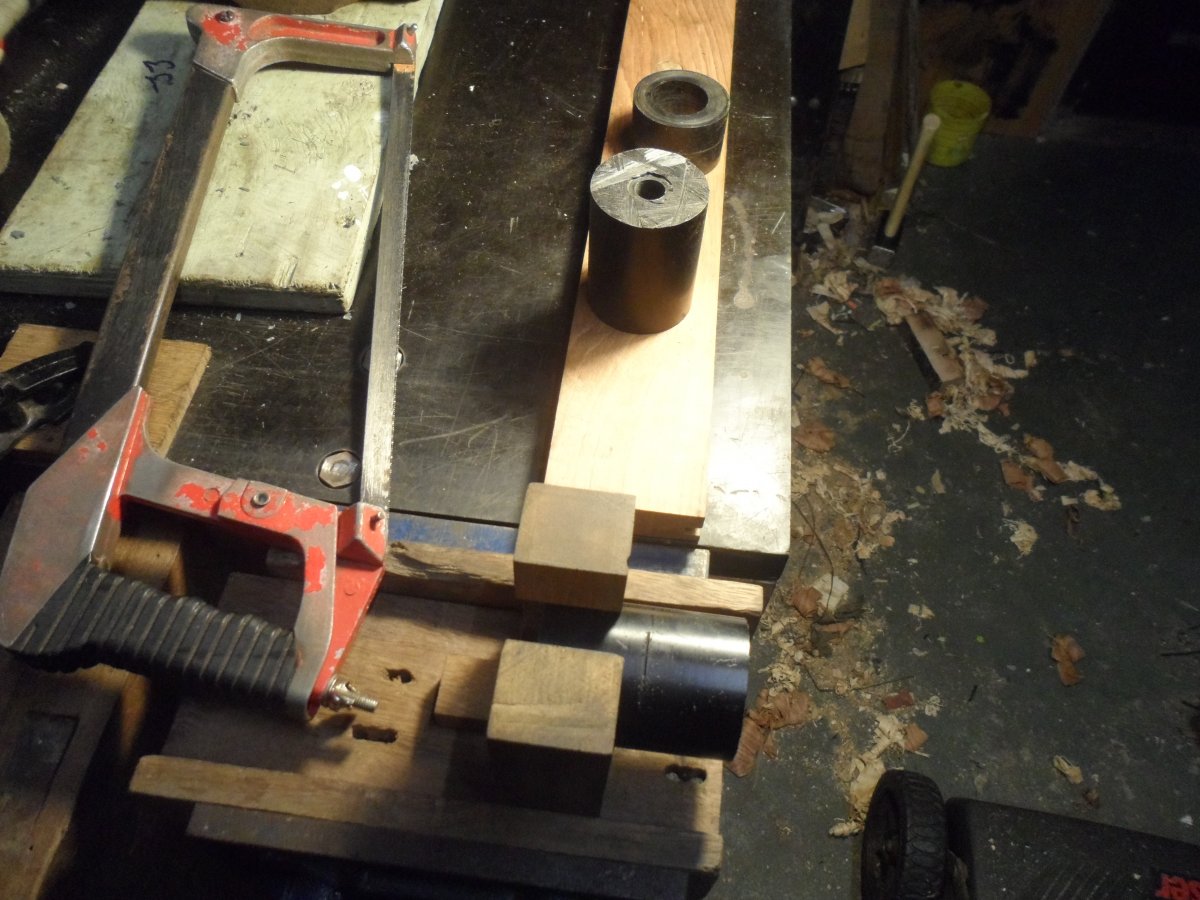 So the swapping in the vise didn't work, I did take out the bit which I can't say helped anything with the matter, and done some quick runout experiments regarding chucking the bit,
and am pretty sure spinning the bit in jaws in the direction of the cut will likely align the bit better than not doing so.


What was noticeable with the vise aligned and cinched down, bar the vise jaws, is the v block bobing a bit moving left to right and choosing either left or right depending on rotation of the chuck being turned, so perhaps this relates as to which side the stop should be,
if wanting to swap the work in the jaws. 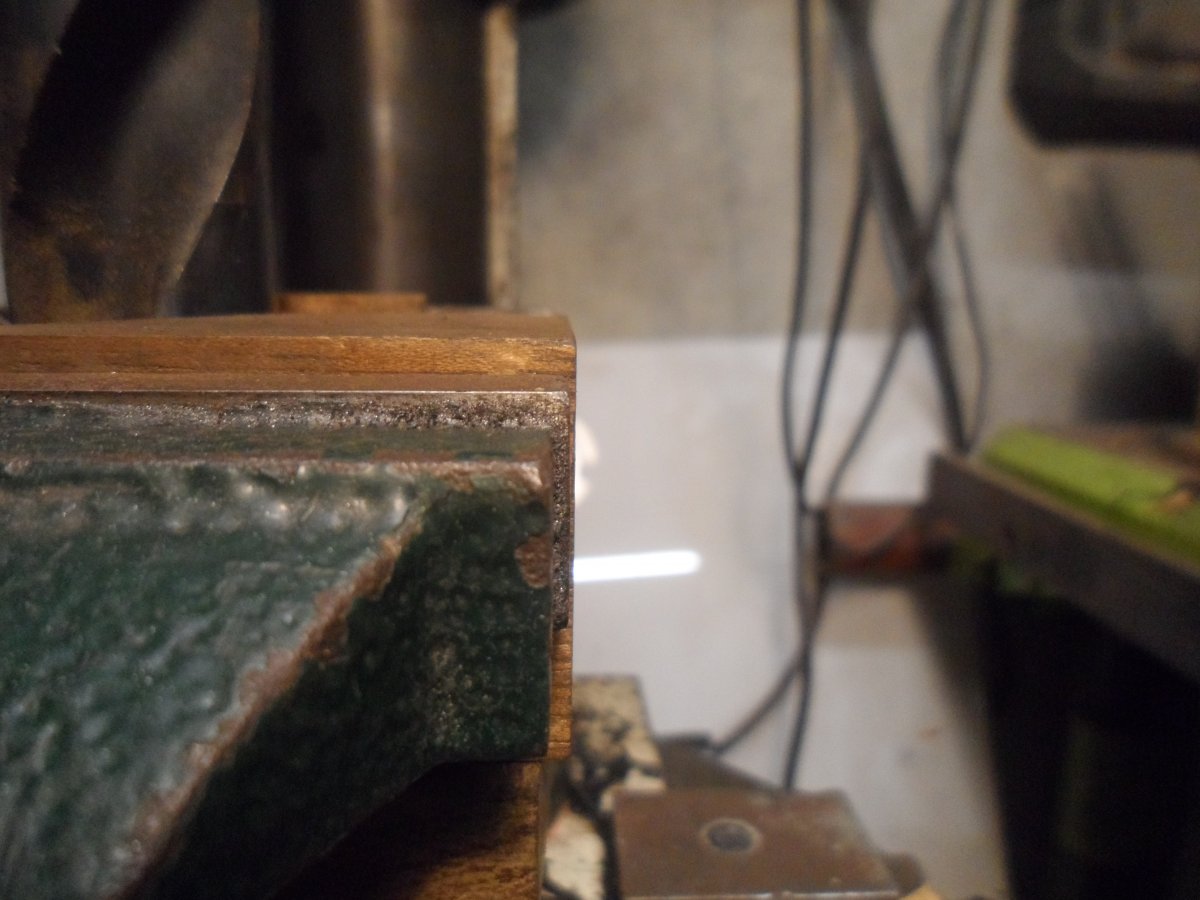 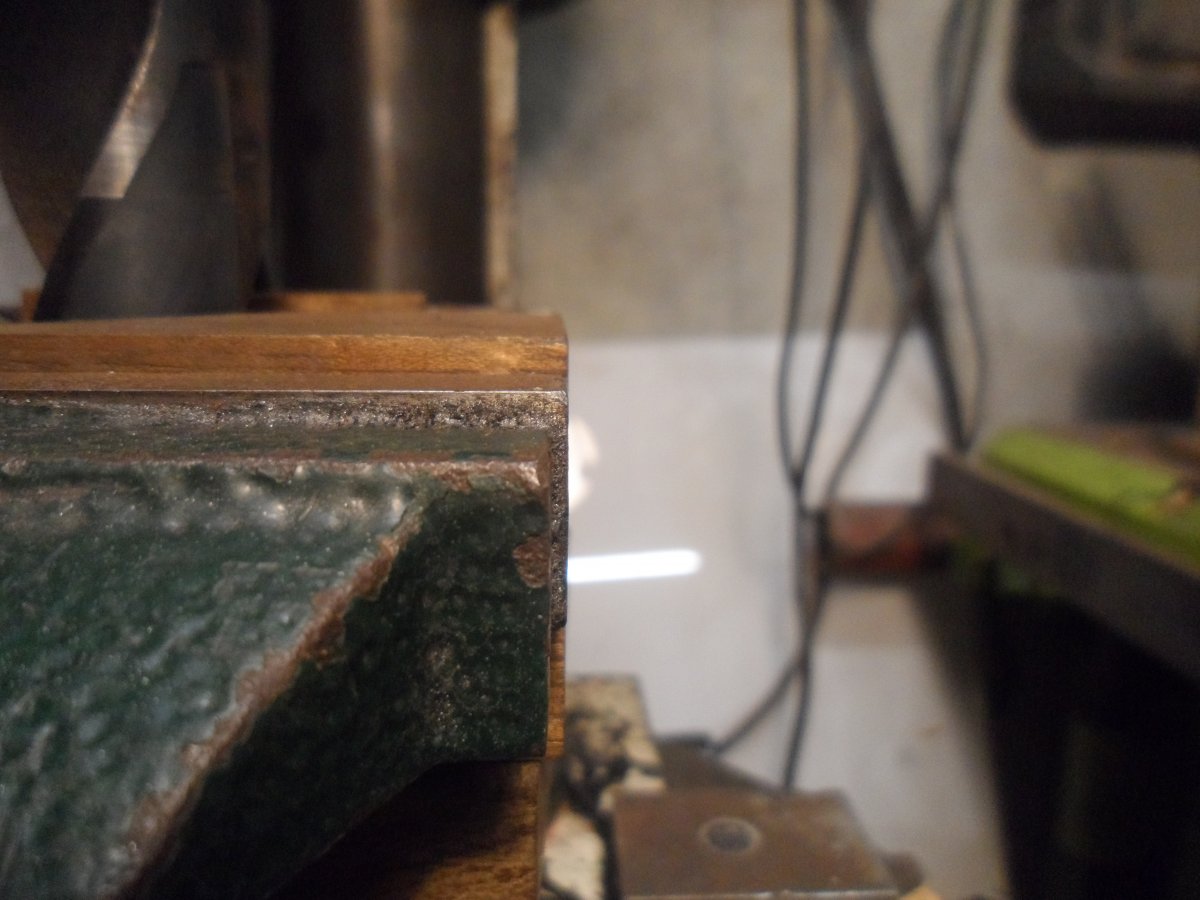 After another two failed attempts, I was down to the last piece, so thought I better try everything.
What I did learn that the work was deforming, and actually fused to the block!
So back to both v blocks at least, and some shimming of the vise.

And I reckon better results can be had not applying any lateral pressure of the table when locking it down.
So not trusting another swap in the vise jaws, I attempted this chancy move on this taller final piece, too short for making two of them, I thought I'd be able cut a mistake off and try again.
Drilling to the next size went well, and provided a suitable fit to index off.
Partially eliminating the lathe factor out here, well as of yet, it maybe the key to finding out why this hole didn't go extremely well, as I simply need more stock to figure out what the issue is.

Would be nice to revisit this, the table support maybe to blame, as it seems the most discrepancies was 12 and 6 o'clock, maybe down to the vise, but I reckon more so, the table flexing at this point.
Slightly disappointing but I reckon good enough to do some hand work to still achieve a press fit on the shaft.
Definitely most pleased with the third video, even though it would seem to be lacking.
Some more head scratching to do it would seem. 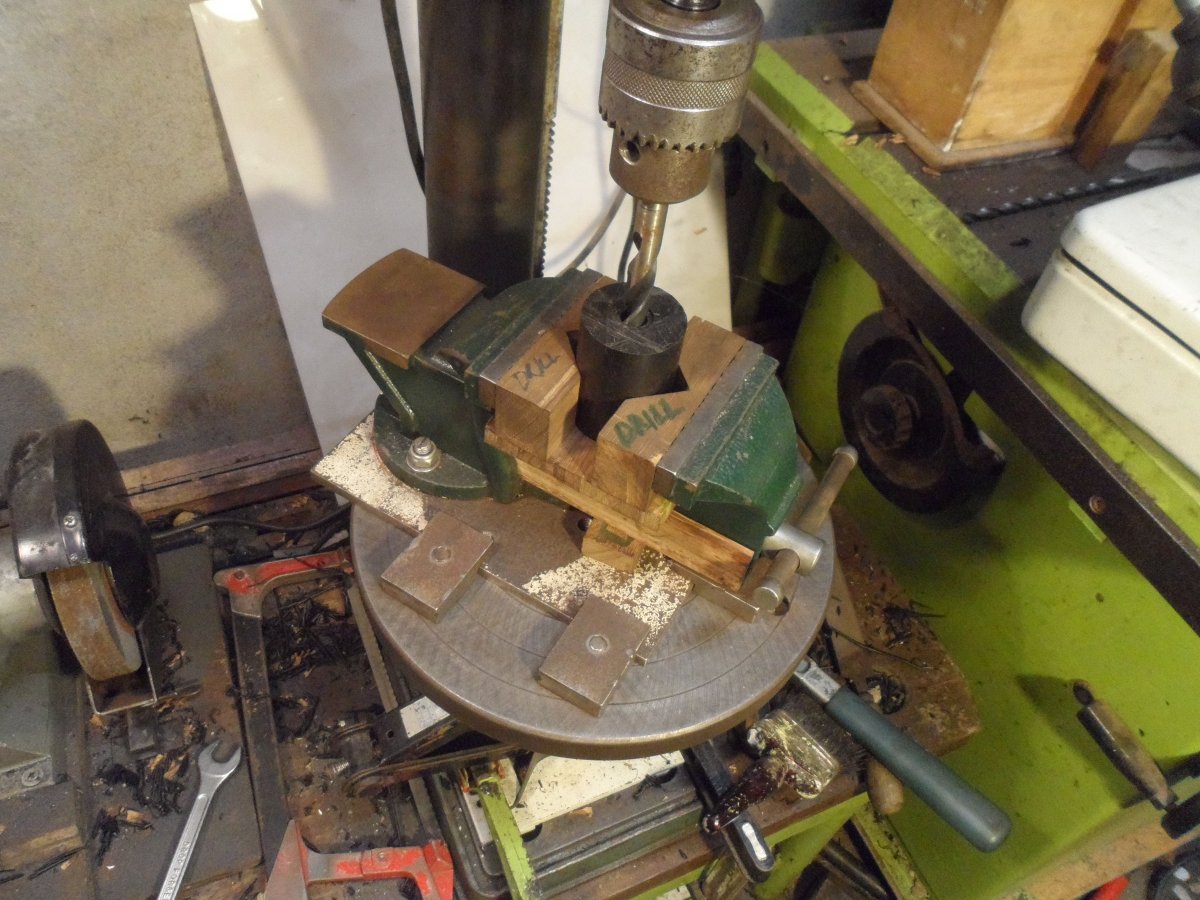 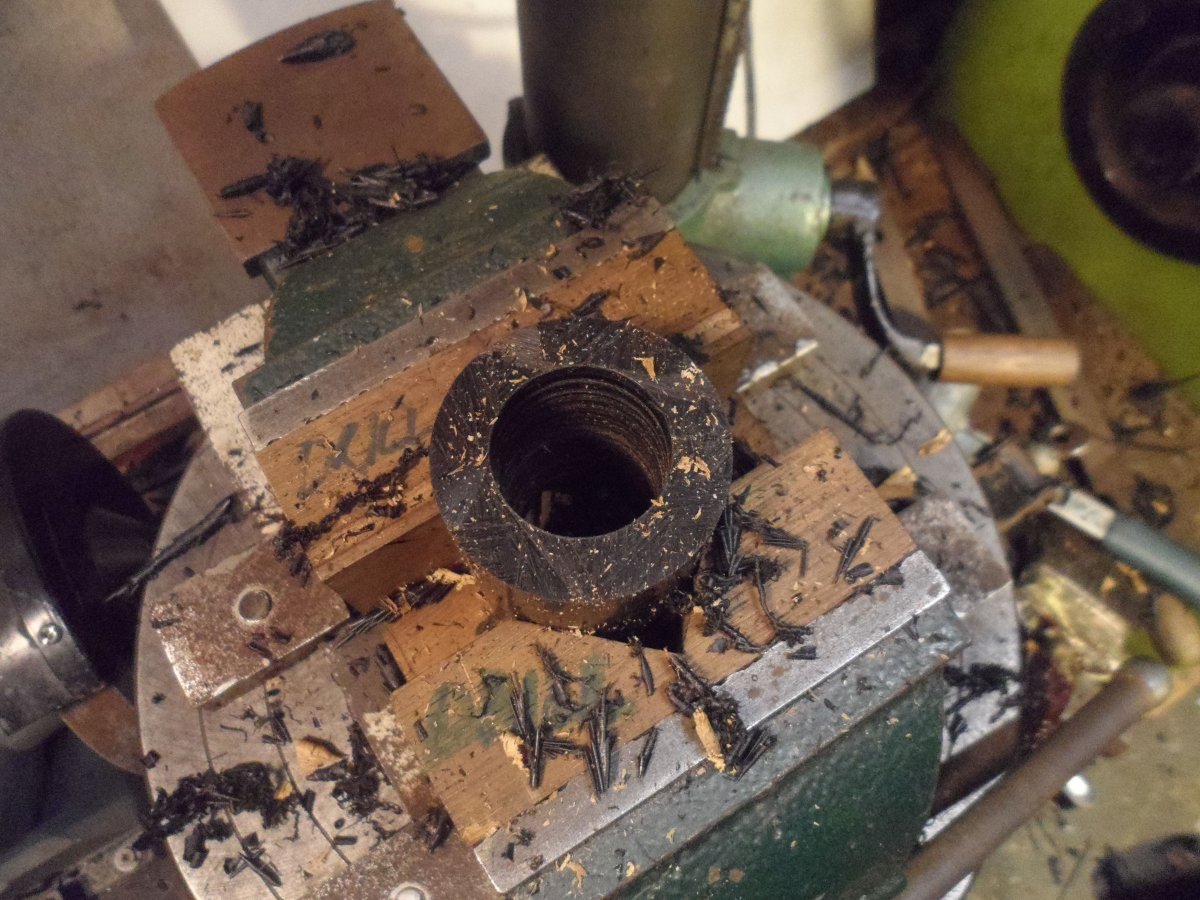 At least one of the pieces spins well on the mandrel, have a bunch of others one or two which might be as good as the last one. 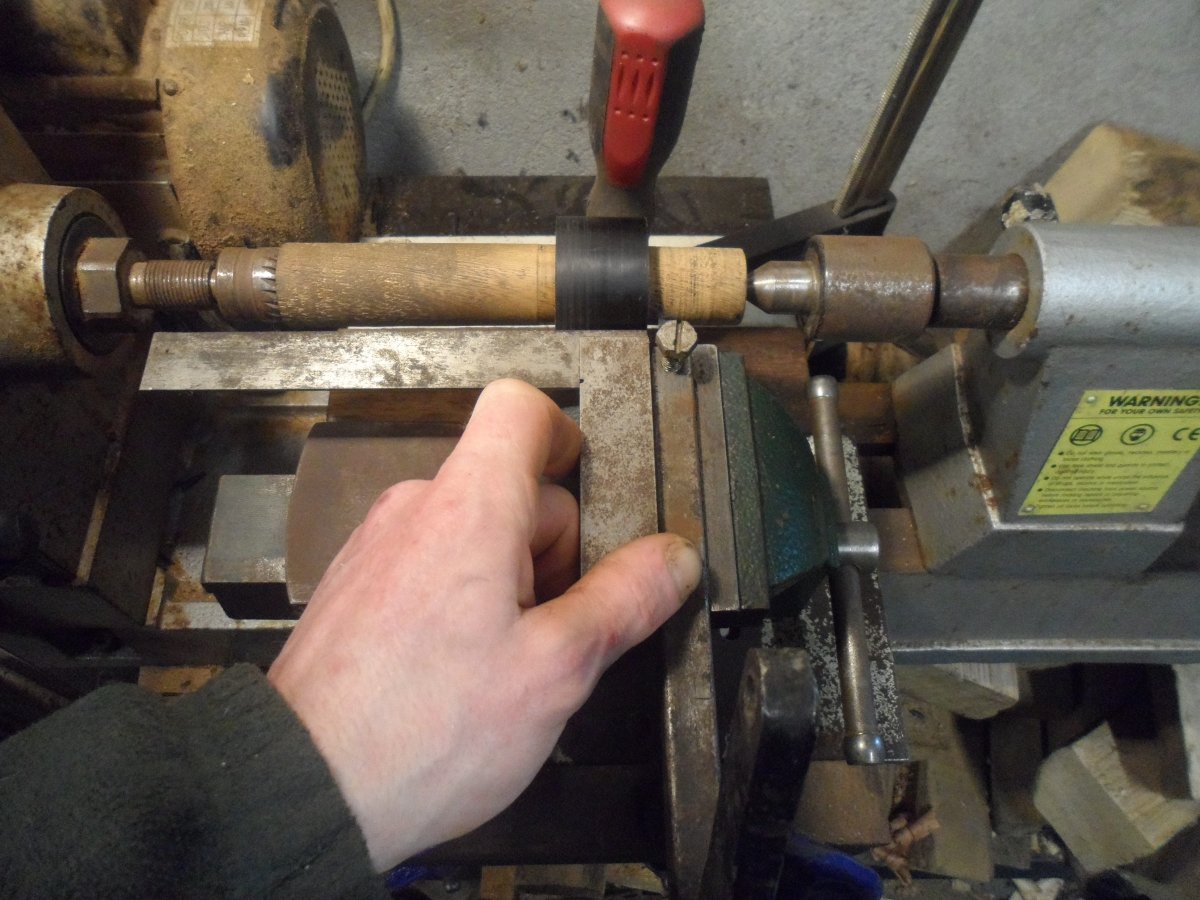