My first lot of hex shank drill bits were the cheap two part kind, where the drill starts rotating in the shank, kind of defeats the object of the hex shank. You get what you pay for.

My next purchase was a one piece Famag set, this one. When I mean one piece, I mean each drill is made out of one piece of steel, I know its a 5 drill set 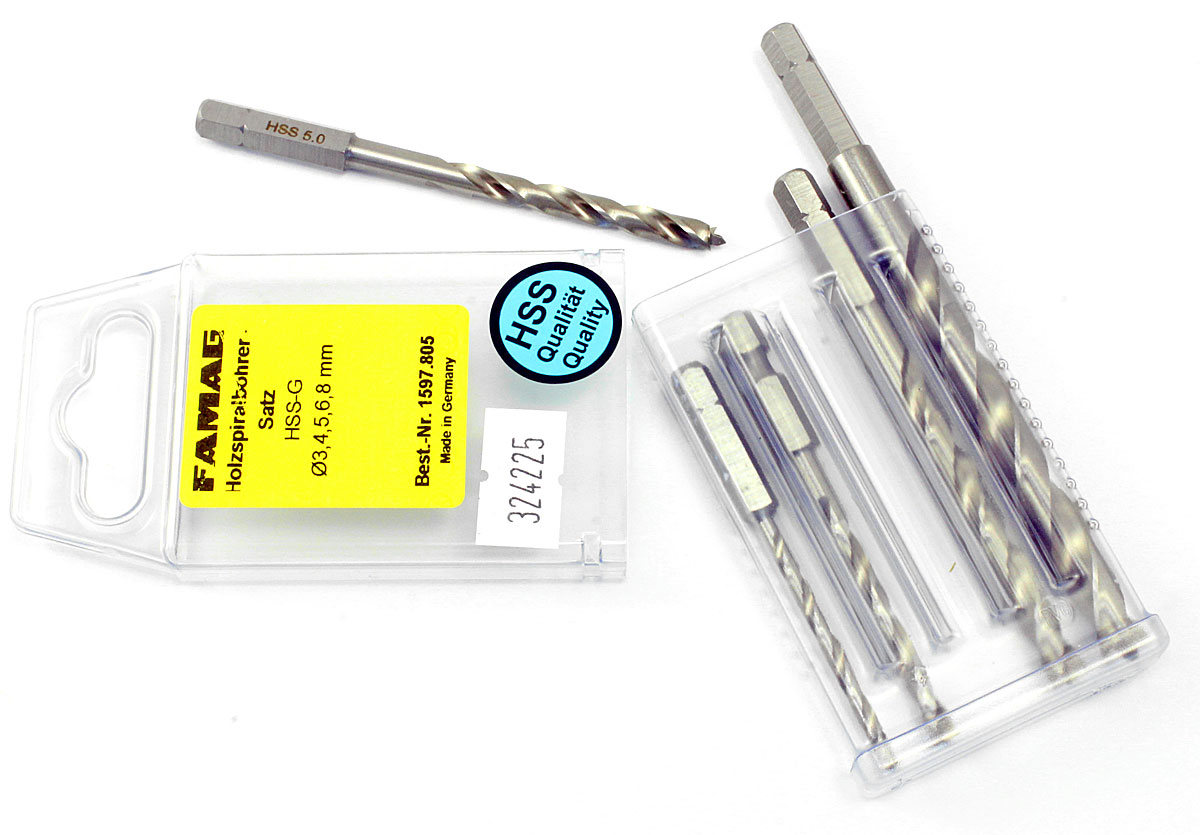 The only problem is that the shank does not have the large groove so it is retained in your average chuckless driver directly, it will fit but when you try to remove the drill from the hole it usually slips out of the driver. It is designed to fit in a bit holder, as per a screwdriver bit. This adds to the total length making them less than useful when working in small cupboards etc.

Any how, I have misplaced them, I've looked high and low, I'm sure they will turn up but in the mean time I have bought these Fisch ones, still one piece but with a sensible groove. I have a nice small 12v driver, yes I could just use a chucked drill, but while I'm making the kitchen I tend to use both pillar drill in the workshop and cordless in the house so two sets of drills are useful, one for the chuck on the pillar drill, and for convenience I though quick change hex shank drills would be useful. 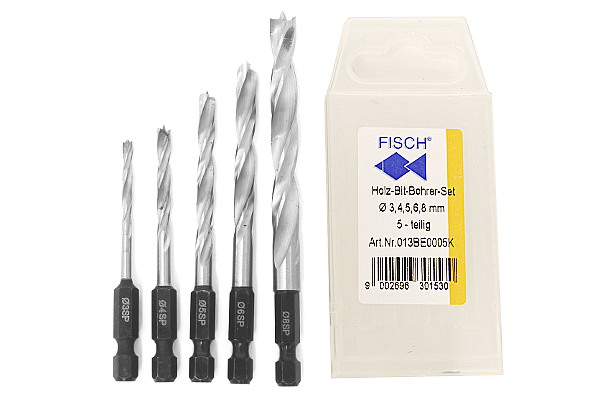 Then I saw the following Famag short drills, I like the idea, shortens the overall length so I don't have to get the right angle drill out, but these haven't got grooves either, so by the time you have added a bit holder to your hex driver, you may have just used a standard drill. 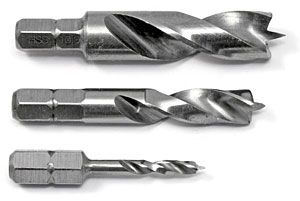 Am I missing something like some Festool influence or is the design wrong? Not a major issue but I'm on the train to London and bored, pardon the pun

If you like the Festool approach. The regular Festool twist drills (not Lip & Spur) have a grub screw in the bulbous part of the body to allow the drill bit to be replaced. You could get a set of those and replace the bits with a Lip and Spur drill of your choice?
You would have to also grind a flat on the drill bit for the grub screw to lock against.

The size range of the Festool is a bit restricted though. I really wish they did a 2.5mm size.

Apart from the domino, my workshop is a festool free zone I just wondered if the reason for the strange Famag design was Festool.

I think I may shove the Famag bits, if I find them, in the lathe and cut a decent groove centred 9mm from the back of the bit. If that works ok I will put the short Famag bits onto my xmas list.
D

You could get these and swap the bits?

I think workshop heaven stock these “Star-M” bits which are on a regular 1/4” hex with the retaining groove. I think they’re also a short drill size as well so that might work nicely for what you’ve described.
D

Trevanion":3oy5obsn said:
I think workshop heaven stock these “Star-M” bits which are on a regular 1/4” hex with the retaining groove. I think they’re also a short drill size as well so that might work nicely for what you’ve described.
Click to expand...

Thanks for that, now I really want some of these #-o
D

Just re read the original post and now see what you are saying.

The Famag drill bits are all wire detent which means you have to put them in a separate bit holder which never seems right for a drill bit.

The ball detent ones like the Fisch ones make much more sense.

In answer to your question I don't think you are missing anything, the Famag just seems like a waste of a good drill bit, why not make them ball detent so they can be used (and stay in) a normal quick release type chuck. Neither type will fit in the Festool Centrotec chuck without modification.
A

A normal round shaft lip and spur bit holds perfectly well in both my pillar drill and battery drill chucks, as said, certainly up to at least 6 mm say. PERHAPS you may need more torque above that dia, but below that, I can't see it, sorry. (I've had no trouble with bits up to 14 mm which is the largest lip & spur bit I have).

And a disadvantage of hex shaft drills is that just as already said, the drill bit is over long for a screwdriver bit (compared to an actual screwdriver bit) so tends to wobble a bit, especially if you're working inside a confined space and can't quite see exactly what the point is doing until the point is brought into firm contact with the job.

So personally I don't use hex shank drill bits at all - or certainly not in the smaller sizes. But perhaps I should add I have no knowledge of the Festool special system.

But on to "ordinary" lip & spur bits. Dieter Schmid Fine Tools in Germany (Berlin if I remember correctly) has lip and spur bits of good quality down to 2.0 mm and 2.5 mm sizes. Very useful to me, AND they're available in 3 different lengths - "normal", "long", and "extra long" (sorry I've forgotten the actual lengths). I've never looked (!) but he's probably got them with hex shanks too!

Link below (usual disclaimers other than satisfied customer):

... the lovechild of a lip and spur drill and a Jennings pattern ...

Well. What more could a man ask!

I've got a set of Colt HSS brad point drills I bought from Fine Tools a few years ago, and I've added to them as needed so now got from 3mm up to about 12mm in 0.5mm increments. Lovely drills and use them in the pillar drill and generally in the workshop but don't tend to take them beyond the workshop drawer.