Hi guys, i'm new to this forum so apologies if this is in the wrong place. I'm looking for a bit of help with a recent build I made, which looked great when finished but just a few weeks later is in ruins.

I made this scaffold board table top, dowel joined and glued along the edges, complete with end ties, glued and screwed onto the ends for a nice finish. It looked like this: 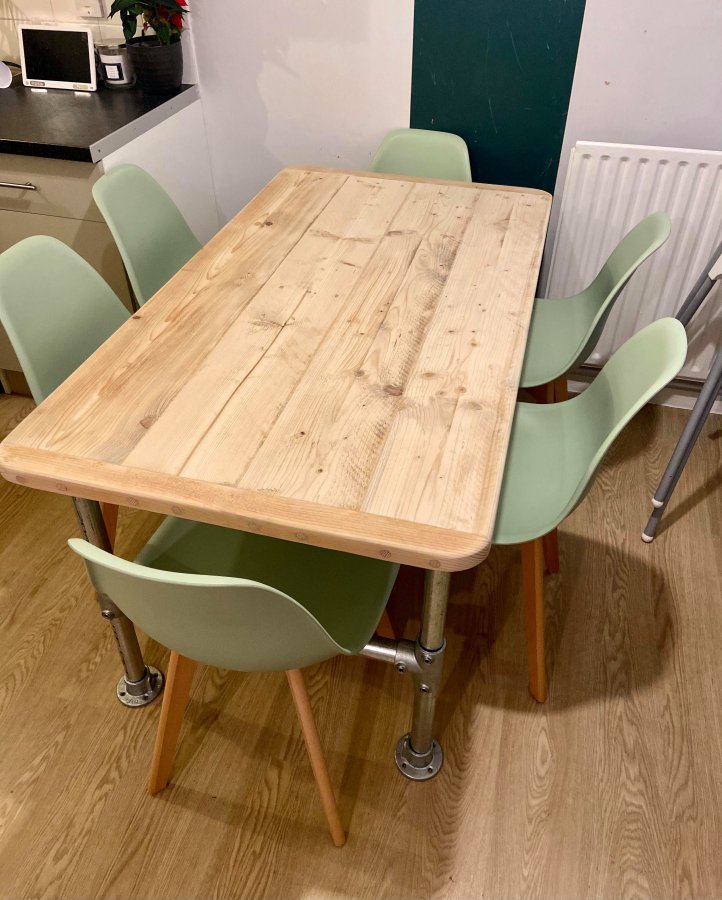 It has moved from my cold workshop to a warm family kitchen and now there are multiple issues: the boards seem to have shrunk to all 4 corners now look like this in varying degrees of terribleness: 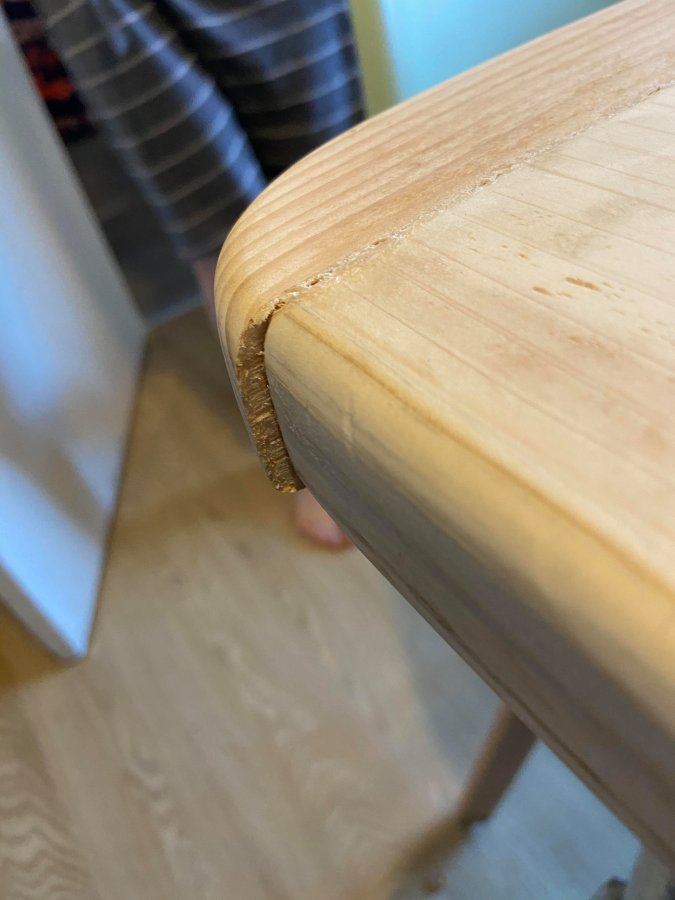 The culprit seems to be this board, which has cupped and cracked down the middle, forcing it up and ruining the flatness of the table: 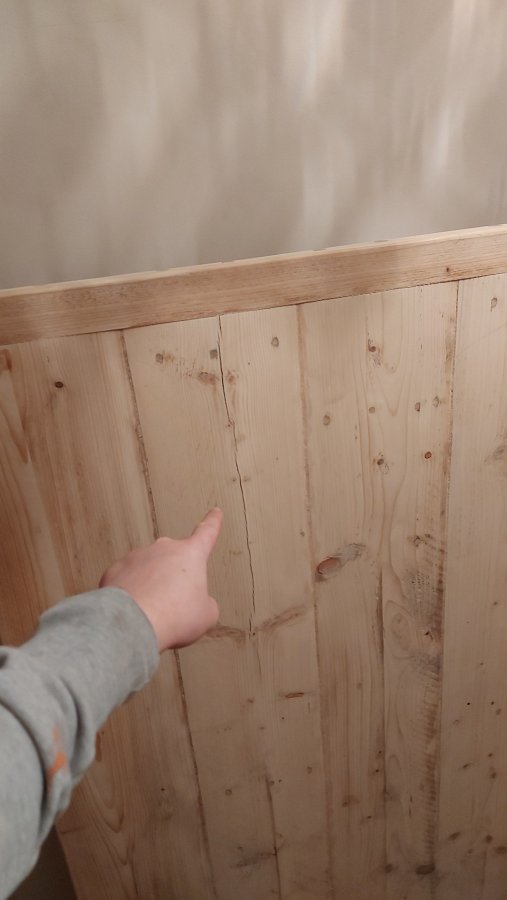 As you can see there are now gaps to the end ties also.

My question to all of you i guess is, is there any way i can fix this without completely ripping the table apart and starting again?
If i do need to dismantle it and re-design it, is there anything I could do better next time? For instance bracing on the bottom, a different joinery method etc? I'm really stumped with what to do here!

Any help at all would be hugely appreciated.
N

the boards were to wet and have shrunk as they dried. it isn't jus the one board that has caused this, all of them will have shrunk. that board is especially poor but I reckon if you looked at the end grain you'd find it has a lot of core grain in it.
leave it where it is for another month then check the water content (be worth putting it on the bathroom scales now and in a months time, it will be lighter in a month and give you an indication of how much water has gone, you can do the weighing a few times over the next few weeks to check if it's stablised or not).

then flatten the top again and recut the ends.
scaf boards are a rubbish material to work with, they are designed to be wet all the time, are normally straight cut and often have pith or core grain as they can be made from the bit in the middle of a log.
J

Yeap as above let it dry out completely.

Then plane flat and fill any gaps and trim the breadboard ends.

are they breadboard ends though, or are they screwed through the sides into the end grain and plugged. If the latter that will stop all movement and cause issues every summer and winter.
J

Pity really as you've made a nice job of it even though its only scaffold boards.
Would have done better when dry! and without the breadboard ends - they help open up the boards as they shrink. Without them they still shrink but might not be so noticeable.
Bread board ends are best reserved for drawing boards or similar and have to be fitted in the proper way to allow for movement. They tend not to be used on trad furniture at all unless it's for special duty pieces like kitchen tables in humid environments
Last edited: 18 Jan 2021

If I were you I would dismantle the table and re-purpose the planks into shelves. Then I would use the same skills and techniques to build a new table out of quality kiln dried timber. I would store this new timber in the house for a week or two to acclimatise before starting work. If your workshop is on the damp side I would bring the project indoors at the end of each day's work.

I can feel your pain, you did such a good job on it.
S

Hmm? Unfortunately you've incorporated the basic errors of using wood that was relatively wet to start with, and then made the situation worse by creating a locked cross-grain construction through adding screwed on end clamps, sometimes known as a breadboards. End clamps have to be attached to allow cross-grain expansion and contraction of the main field of the panel. This can be accomplished via different methods, but a common one is through mortice and tenons (M&Ts) where the mortices at the extremities (either edge of the main panel) are longer than the width of the tenons, and not glued. The M&T at the centre of the panel width is glued. Generally all the M&Ts are drawbored to pull the clamped end (aka breadboard) tight to the end grain of the main panel, with the outer unglued extended mortice and tenon having a slot cut in the tenon to allow for expansion and contraction of the main panel - see images below.

In your situation, a possible method to salvage the table top as best you can might be to simply unscrew the restraining end clamps as soon as possible, fill the screw holes, tidy up the end grain exposed, apply some finish, and fix the crack in that split middle board (or boards) by pouring epoxy resin into it/them. However, I've also noticed that as your scaffold board planks have dried they've cupped noticeably - that is rather undesirable, but maybe you can live with that, or maybe not. In addition, you should check to see if there are additional cross-grain restrictions that you've built into that top; for instance, how is it attached to the scaffold pole undercart? Does your attachment method include the necessary provision for expansion and contraction of the top(?), such as some form of slot screwing, or similar, for example. 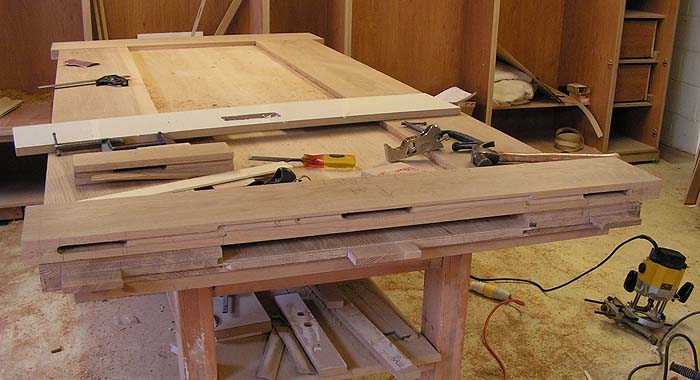 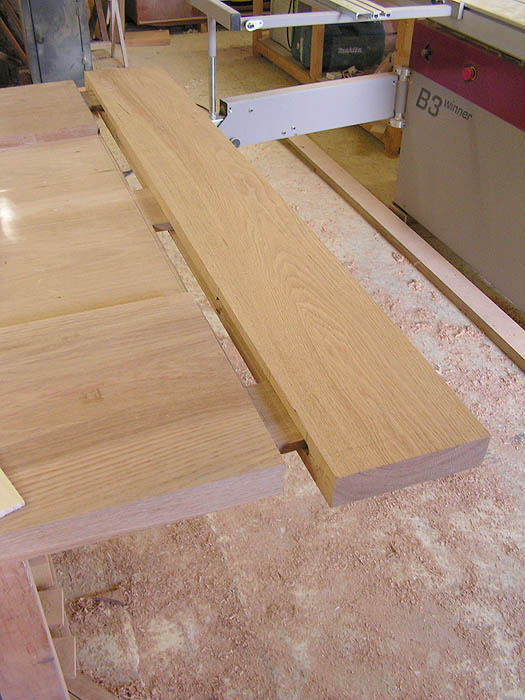 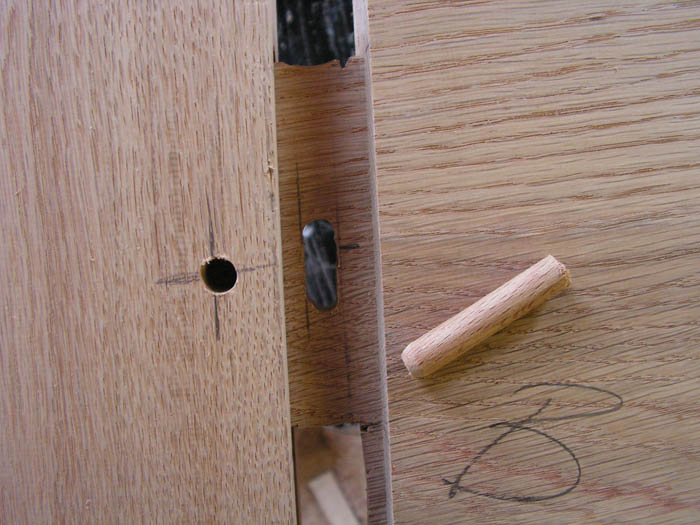 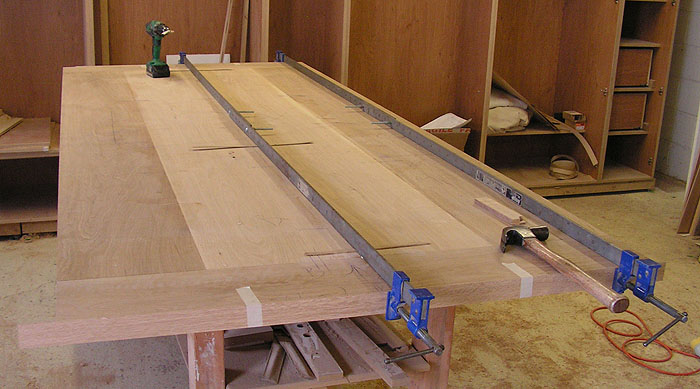 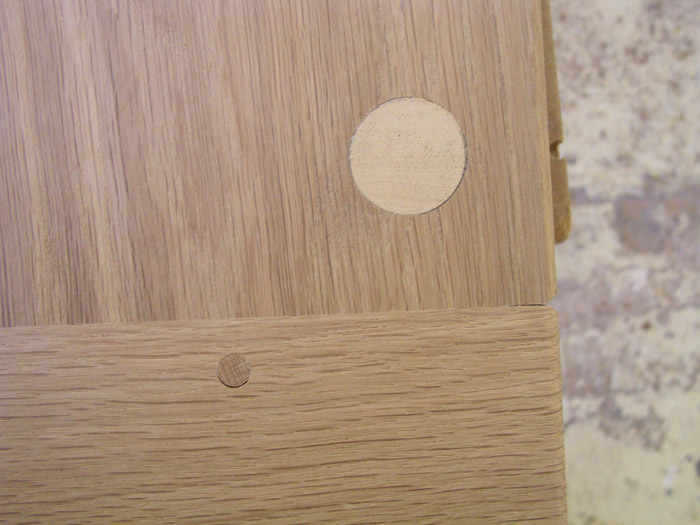 There's a good section on choosing wood in this file I downloaded from Popular Woodworking (recommended today by another forum member).

I hope it's useful.

From my perspective I think the table looks nice, and you should not despair. I think you have made an industrial style bit of furniture with those scaffold pole legs. The feature of the cracks and movement in the top could be considered part of the style and I would not try and engineer them out now. I notice too there are still some rough saw marks visible in photo 2, again part of the style which rather compliment the cracks. If you can think of it that way you don't need to throw it away. I would consider removing the breadboard ends (just learnt that name) and then you won't have any visible seasonal movement later on.

If you think that food will get smashed in to the cracks, and it probably will, then fill the cracks with wax. Dark colour would be my choice.

The wood may continue to cup, and I would not worry about that until it's dried out. Only the would I think about flattening it. I mostly use hand tools and it honestly won't take long to plane that pine flat again.

If you had made a mahogany dining table with turned legs and a mirror finish French polish then the cracks would be a major defect. But it's not so it's not a defect.

I would find restarting will be soul destroying. Instead I would move on to another new and fun project taking what you have learnt here.

The crack is caused by the two screws either side of it preventing the board from shrinking.

I'd echo timothyedoran suggestion of making the best of what you've got. Most of woodworking is figuring out how to solve mistakes, so I'd treat this as a learning experience and see what you can salvage.

In the breadboard ends, I'd probably drill out the plugs and remove the screws from all but the middle two, then elongate the screw holes in the breadboard only, put the screws back in and replug. This way your screws are acting as tenons. It should (in my unqualified opinion) stop it tearing itself apart each summer.

Then I'd use epoxy to fill the cracks. Black epoxy looks remarkably natural imo, and the epoxy putty (I use milliput, dunno if there are other brands available) is much easier to use than the normal runny stuff.


//edit - It looks like you glued the breadboard ends, my suggestion above assumes that the natural wood movement will break that glue joint in short order. I'd be interested from those more knowledgeable whether that could be expected?
D

It's a rustic, industrial looking table so I would remove the breadboard ends as they won't be helping and just live with the natural character of the wood. Not sure how the legs are fitted but I would screw them off then back on again, this might relieve some pressure and you might find they go back on in a slightly different place.

I mended a big Oak dining table for a customer a while ago, they had bought it from some big furniture store, it cost over £2k. It was a modern design where the outside of the top finished level with the aprons. One day they heard a loud bang from the dining room and found the table top was now about 10mm smaller than the apron. Turned out the top had been glued down to the apron and this had given way in quite spectacular style, it also snapped the screws which went through the apron in to the top! I had to shorten the end aprons then made it so the top could "float" to hopefully stop any further problems. I was amazed how something like that could be so badly designed.

Basically wood needs to be able to move, especially something the size of a table top. Internally things can shrink more in winter when we have the heating on.
T

I would be looking at putting a couple of hardwood bearers across the tops of the legs to help movement and pull the top into line. 3" x 1" with slotted holes cut to allow 2 screws per board. Release the ends as suggested above then screw each board to the bearers, starting from the middle and working outwards. This should go some way to flattening the top. Once that's done screw the legs to the bearers and refinish. Like the milliput idea if it'll stay put.

Just the thoughts of a non-professional bodger

Do take from this that almost everyone has said "Nice job". I'm not going to add to the superb advice above, the wood wasn't kiln dried but good effort. Try again, and it will be perfect.
S

Snettymakes said:
It looks like you glued the breadboard ends, my suggestion above assumes that the natural wood movement will break that glue joint in short order.
Click to expand...

Yes, the glue joint has failed as can be seen in the photographs used to illustrate the problems described in the original post. Failure at the glue line is almost inevitable in a long glue up like that because gluing end grain to long grain results in a relatively weak joint that can't resist large cross-grain expansion and contraction of the main panel.

Smaller end grain to long grain glue joints tend to work reasonably well, such as those used to attach corner blocks to the framework of traditional chairs, but these are usually supplemented by a couple of screws in each block, which helps reduce the likelihood of rapid failure. Slainte.
Last edited: 21 Jan 2021