Orraloon said:
That will mean you cant use it for that design of knife.
Click to expand...

Hi All,
Thanks for all of your replies. Just thought I'd update you with how I got on.
After the common consensus was that the chisel would probably be laminated with only a small bit of hard steel at the tip I didn't hold out much hope but as I had the chisel I thought I'd give it ago anyway. I did a quick spark test on a grinding wheel comparing the sparks to both a mild steel nail and an old file and the sparks from the chisel, while not quite as "sparklery" (technical term!) as the file were definitely more so than the nail.
I'd made an adjustable bevel grinding guide a while back so clamped the chisel to this, set the angle to 20 degrees and went very slow and steady with a 1 inch bench belt sander trying to keep the heat down (the bevel grinding guide is made of aluminium so is a pretty good heat sink, my garage is cold and I did it over a number of sessions). I then finished the edge with a 1000 and 6000 grit whetstone. Its not quite shaving sharp but I certainly wouldn't want to slip with it!
I haven't tested it in anger so who knows how durable the edge will be but I did try to use letter punches on the handle portion to add some initials and they didn't even touch it, so perhaps these old chisels where made of better steel than we first thought!
Cheers,
Pete. 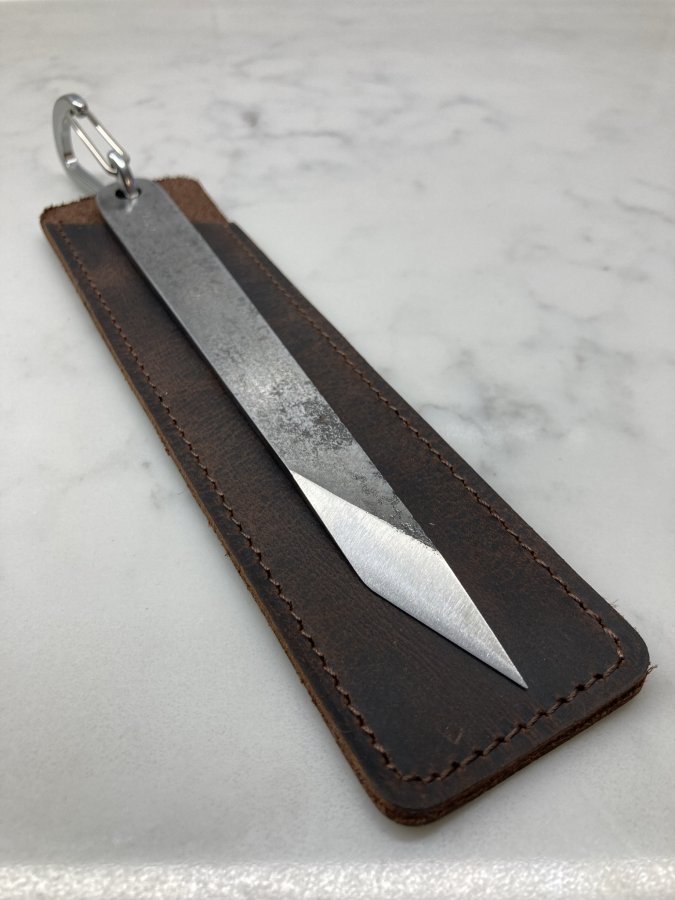 the tip will be the first thing to go. If that's the case (Because it creates a lot of work grinding back the entire bevel if it does) a tiny back bevel from the spine down - like a millimeter or so in length and maybe only about 10 or 15 degrees - will add enormous amounts of strength to the tip without making it too blunt.

As far as the steel and the rumor that stuff like A2 or V11 is better for chisels (or whatever the flavor of the day is now), not a chance. Steel with carbon a little over 1 and only enough nickel, chromium or manganese (or a combination of it) to be hardened well will probably never be bettered for wood chisels, and the matrix/fineness is far finer than modern steels with a lot of chromium in them for hardening stability.

The only modern steel I've used making chisels that matches the best of the old wards is 26c3, and you won't see any manufacturers using it any time soon (26c3 can have double the toughness at 64 that O1 will have at 61.5, so you get the biting hard edge with it, but it's also tougher and will take more energy to break). And there's nothing really unusual about 26c3, it's just high carbon with a trace of chromium and manganese mostly for hardenability (sheffield chose natural ore before modern steel technology that had trace elements in it that made it more hardenable).
D

(the real reason water hardening steels aren't used in chisels has a lot more to do with them needing individual skill to harden properly - if you tried to make an industrial schedule for them that included grinding to a precise size, you'd have to leave a lot of room for grinding and then you get up against an issue that water hardening skills have in fat cross sections - they won't harden to the center, so anyone working with water hardening steels needs to be able to harden them in a thinner section and adjust for warpage - something people were willing to do by hand, but not now. You can make a solid water hardening steel knife (which will warp like crazy) by tempering the spine a little bit so that it can be tapped and straightened like a saw. Chisels are a little easier to deal with, but water hardening steel does better with a skilled short cycle time heat treatment and someone who can adjust for warpage with skill rather than paint by number method).

Most of the older steels could've been harder if they wanted them to, also, but that would've led to issues sharpening in an era when most people were using sandstones as a grindstone and then oilstones for finishing work.

The side benefit for you grinding a knife is that the older steels are lower abrasion (which isn't the big deal people make it out to be) resistance, and lower abrasion resistance leads to less heat when grinding. Steels with a lot of abrasive resistance grind hot and are a pain to adjust significantly (especially if you're hoping to do something like push the bevel down on A2 or V11 chisels). You have to locate a wet paper towel or something to soak heat off of a tool if you want to grind it consistently whereas you can usually grind something like a ward chisel just by drawing the chisel across your palm to check the heat level.