My 23" height was given from a drawing, I didn't think about it at the time. Luckily it seems OK!

I know this is going to be controversial, but I prefer the pull variety
S

28" ripsaw here half way through a 2" piece of mahogany. Confession time - I cheated here by passing the board over the table saw to give a 3" deep kerf all the way round, so only have to hand saw out the middle:

Forgot to add: In assortments of old woody moulding planes some turn up which have a fixed fence and a narrow blade, obviously for cutting a slot at a fixed distance. Useful for glazed picture frames but may be intended as "kerfing" planes, to perform the operation as in the picture above.
That is - to thickness a board neatly with a hand rip-saw run a slot around the edge and across the ends, as guides for the saw.
I've never tried it but I've got a few of the planes and must have a go!
Would be really useful if you were doing all hand work only.
D

kerfing planes generally add time to the whole operation, as do specialty smaller saws with high gullets intended to start a line.

It takes about half a dozen cuts to learn to steer a saw on both sides of the cut and maybe another half dozen to be able to put a board in a vise and rip left handed competently (so you can go back and forth on a marked board to cut from both sides if needed).

The narrow blades were probably intended to waste rebate waste or set off a stop in the middle of a surface, or maybe take the place of a slitter in wood too hard for a slitter to work well.

The whole kerfing thing made a comeback when someone found plates of them and decided they should be used with a frame saw, but a frame saw can also be steered pretty easily and the kerfing plane just adds time to the operation. I doubt many people with kerfing planes are using them on a monthly basis.

I've stumbled on a pic of Jacob ripping a board. 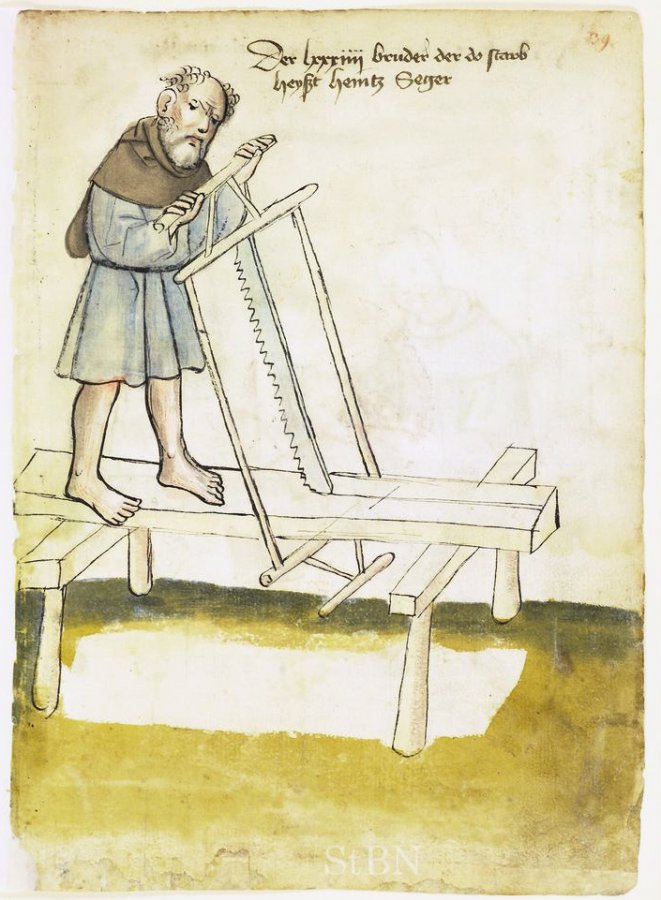 TRITON said:
I've stumbled on a pic of Jacob ripping a board.

Bit of a balancing feat what with those two legged saw horses!