Been looking at these Wixey digital readouts for a while, noticed a few threads on here asking if anyone had fitted to a triton , or if it fits, so I bit the bullet and bought one, and took some pics to put a bit of a guide together to hopefully help others fit one.

Heres the device from the packet, few mounting bits and bobs, supplied drill bit should you need to drill - seems well made for what it is. 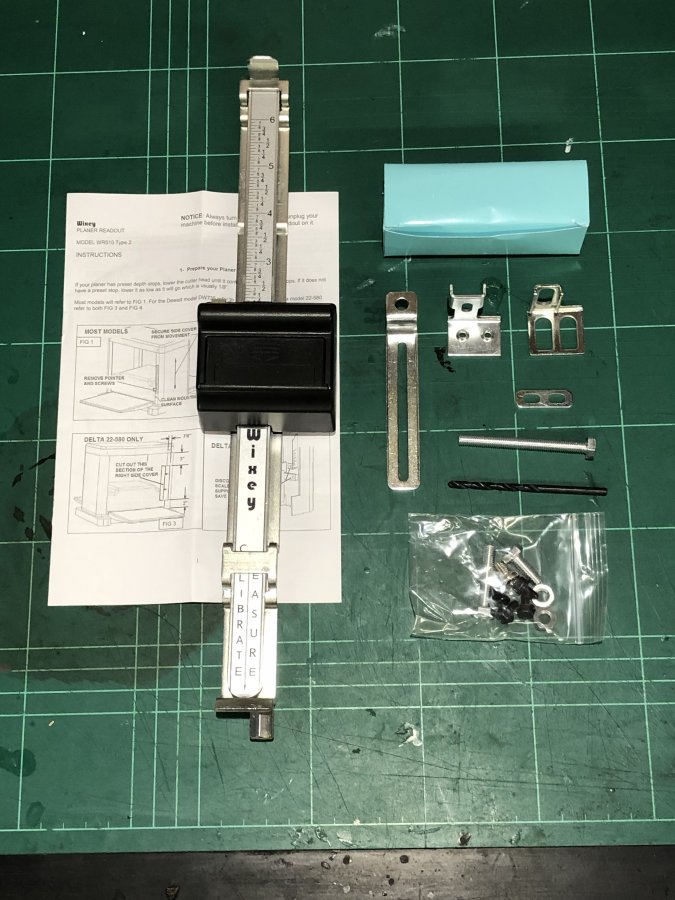 Offered the gauge up to the planer to check is was going to fit before going any further - seemed ok. 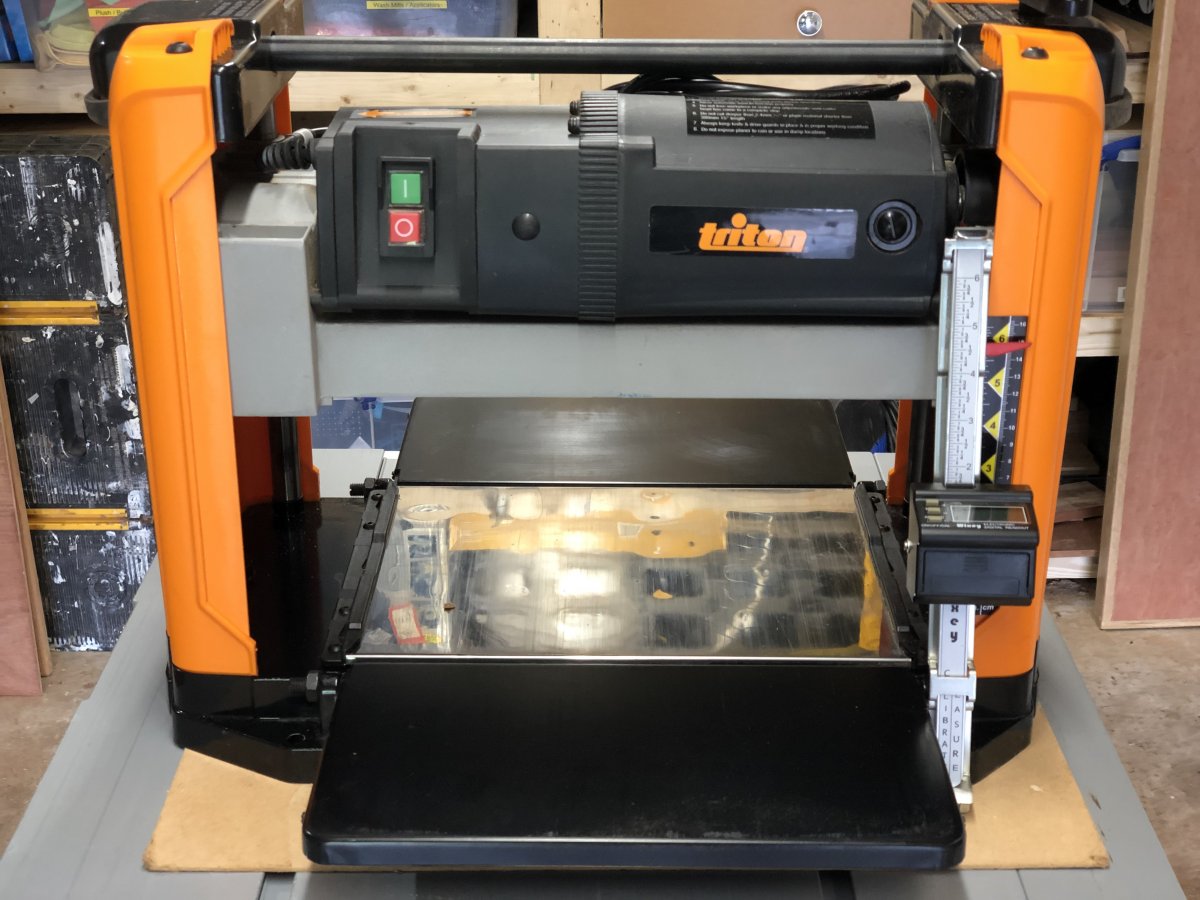 Removed the 2 screws from the original gauge indicator, and removed the indicator and saved the screws for later 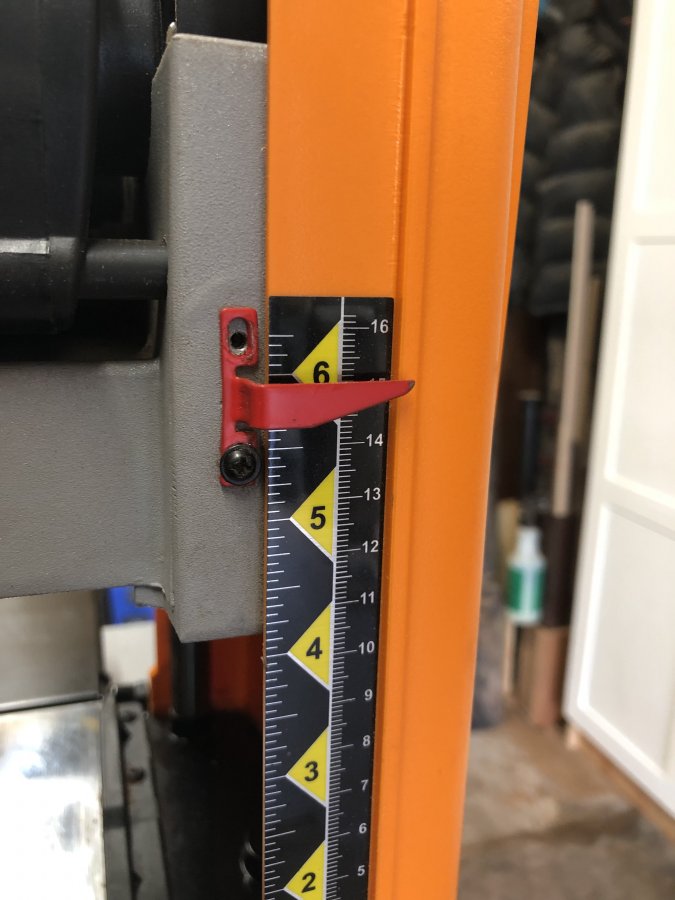 Removed the spring from the top of the gauge, this gives tension to a section of the gauge that pulls up and allows you to put a freshly planed piece of wood in to calibrate the device, more on that later 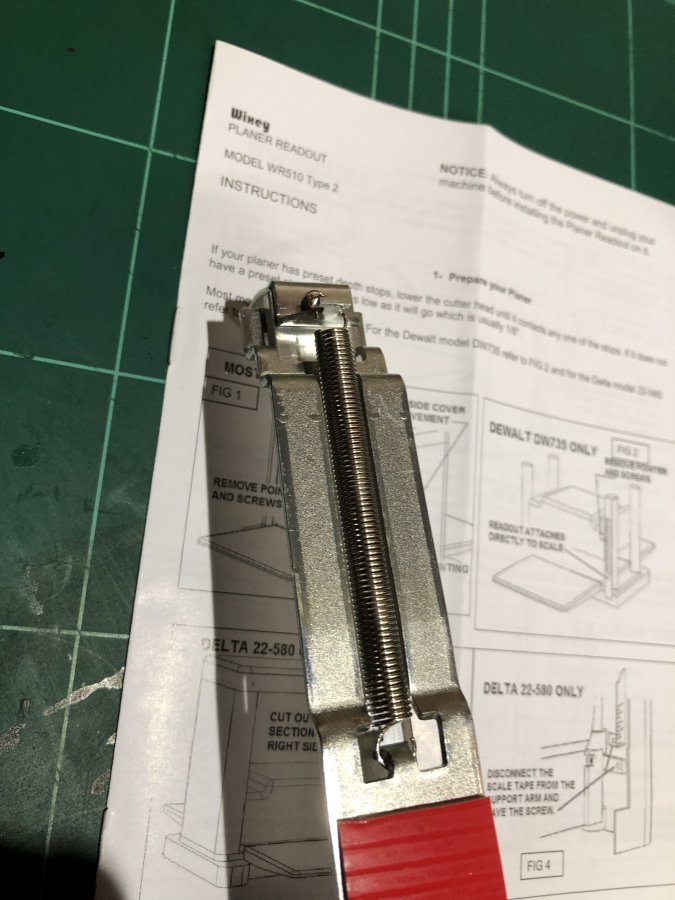 Separate the gauge and the digital readout from the mounting bracket 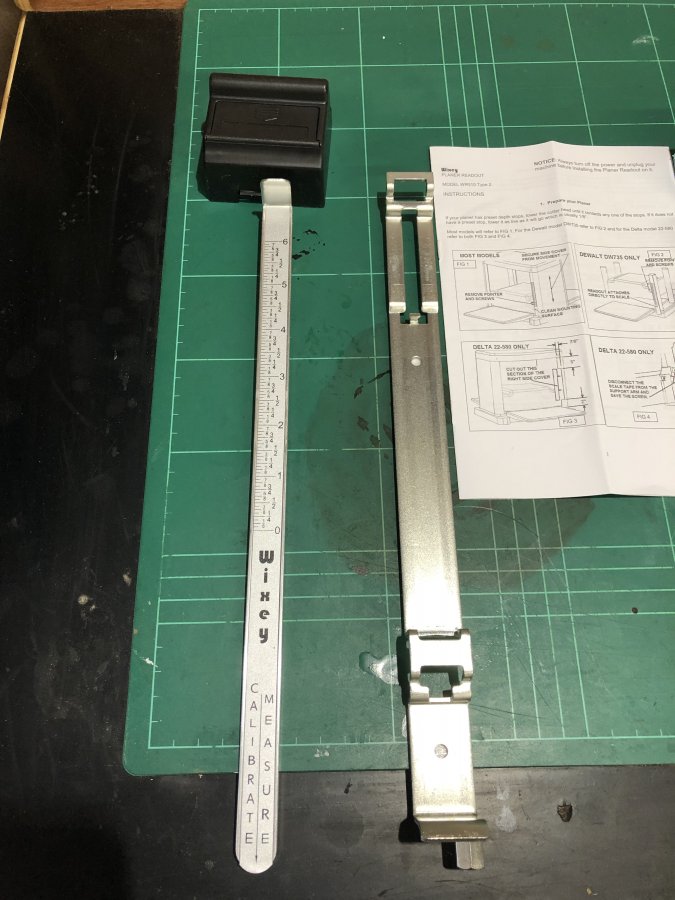 Offered the mounting bracket up to the planer 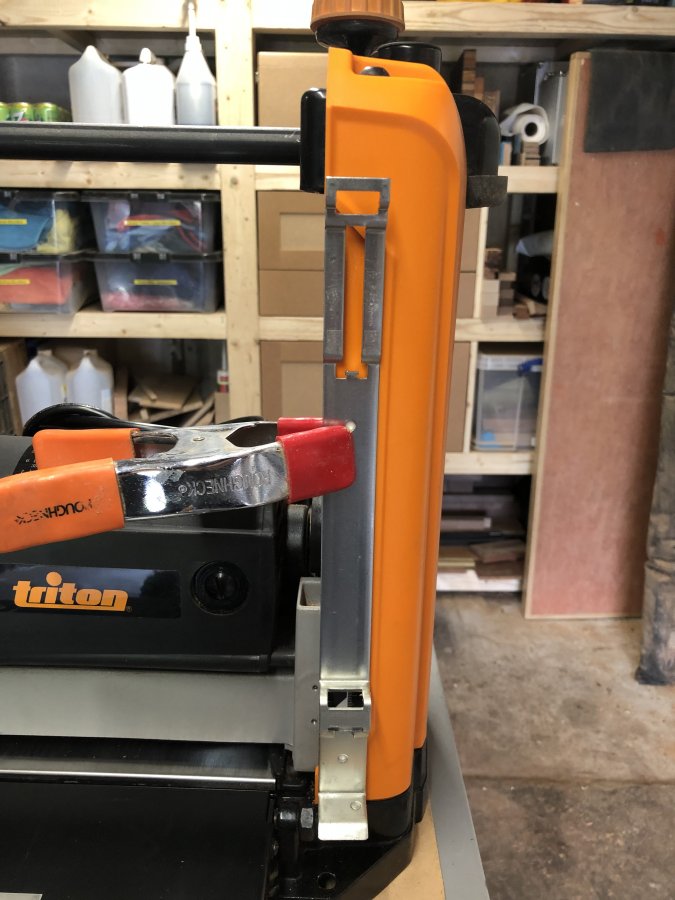 Here came the first problem - the moulding on the orange cased slightly fouled the mounting bracket - there is some double sided tape that can be removed... 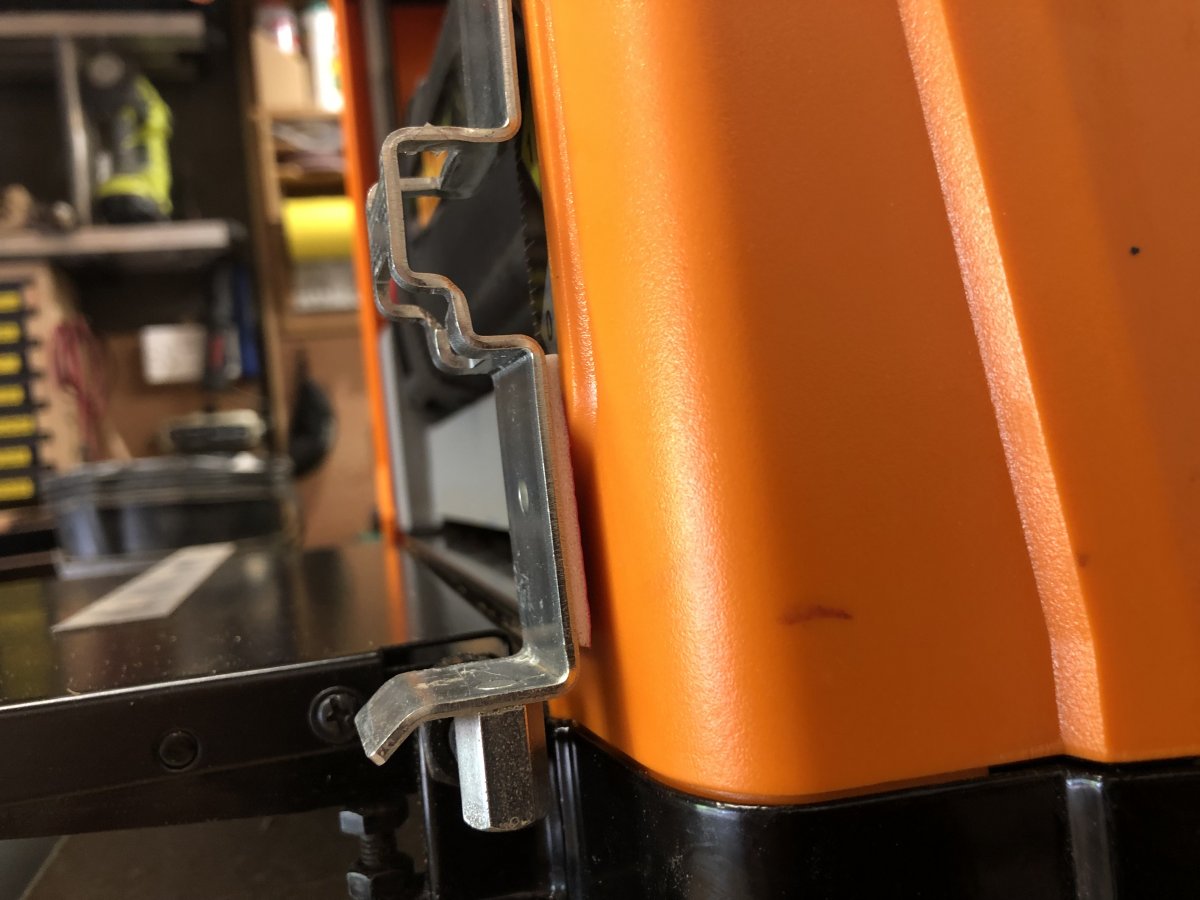 I removed the red/white tape at the bottom where it fouled the moulding, and added some of my own extra tape just underneath the other piece of tape at the top - this would give me contact all the way up the existing gauge 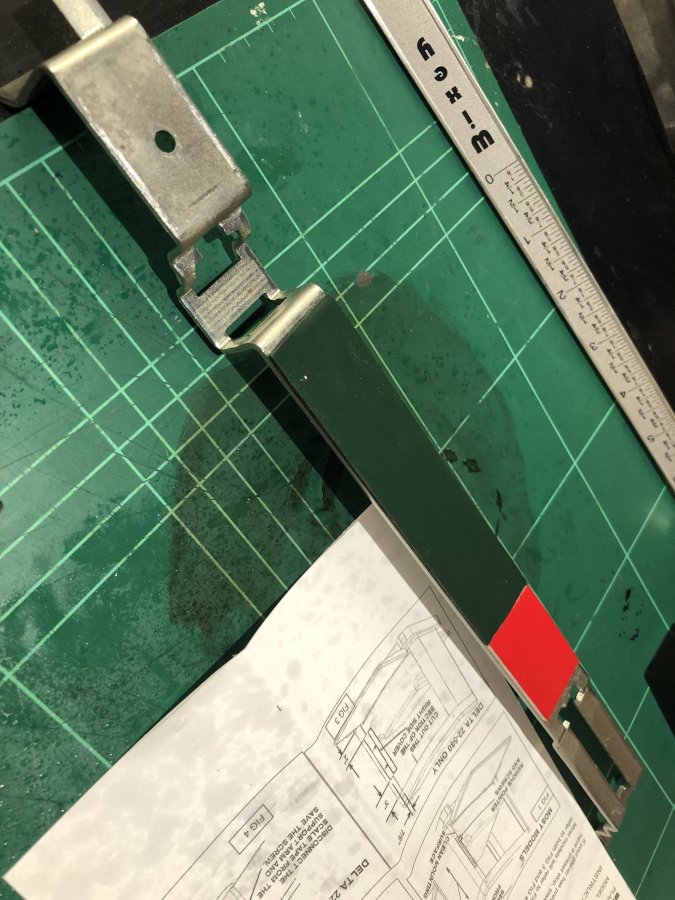 Next, the adjustment screw for levelling needs to be fitted - 3 are supplied, and the one needed for the triton is the middle sized one - add one of the included nuts to the bolt to act as a locking nut (not pictured here) and then screw in the adjustment screw till it goes all the way in 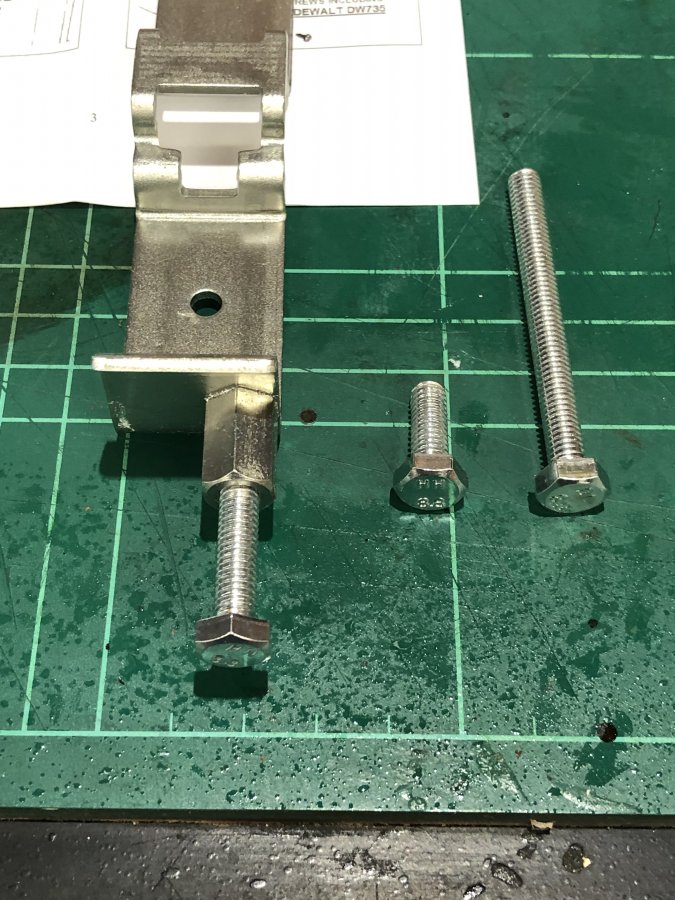 Here you can see the adjustment screw sitting on the casing, and a small 'platform' which is part of the gauge - this will need lining up with the bed of the planer, it can be a little higher, but not lower (so the instructions say!) and then lock the other nut. 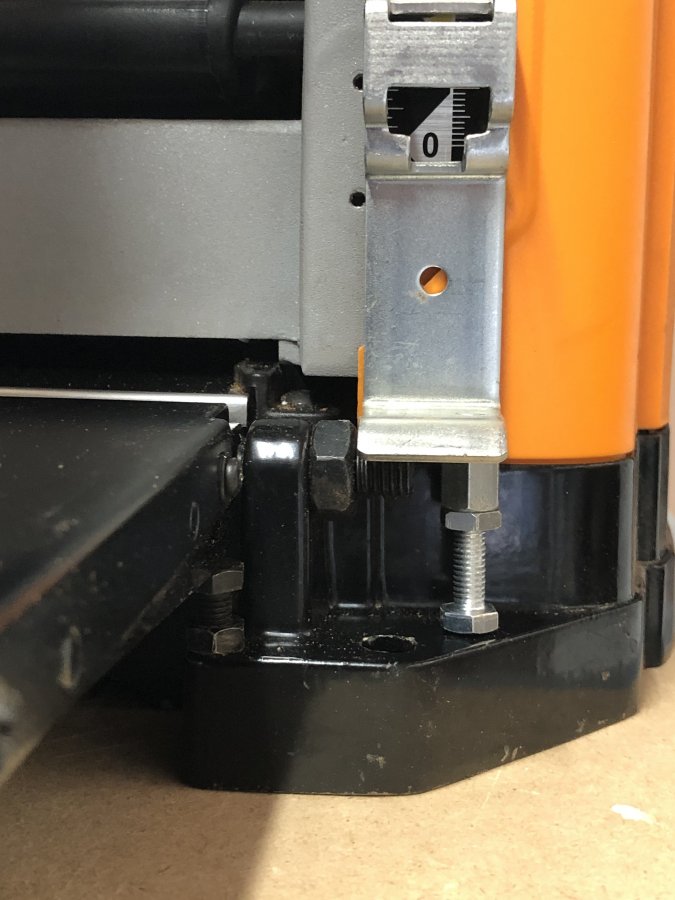 Here im lining up the platform on the gauge with the planer, I opted for slightly higher 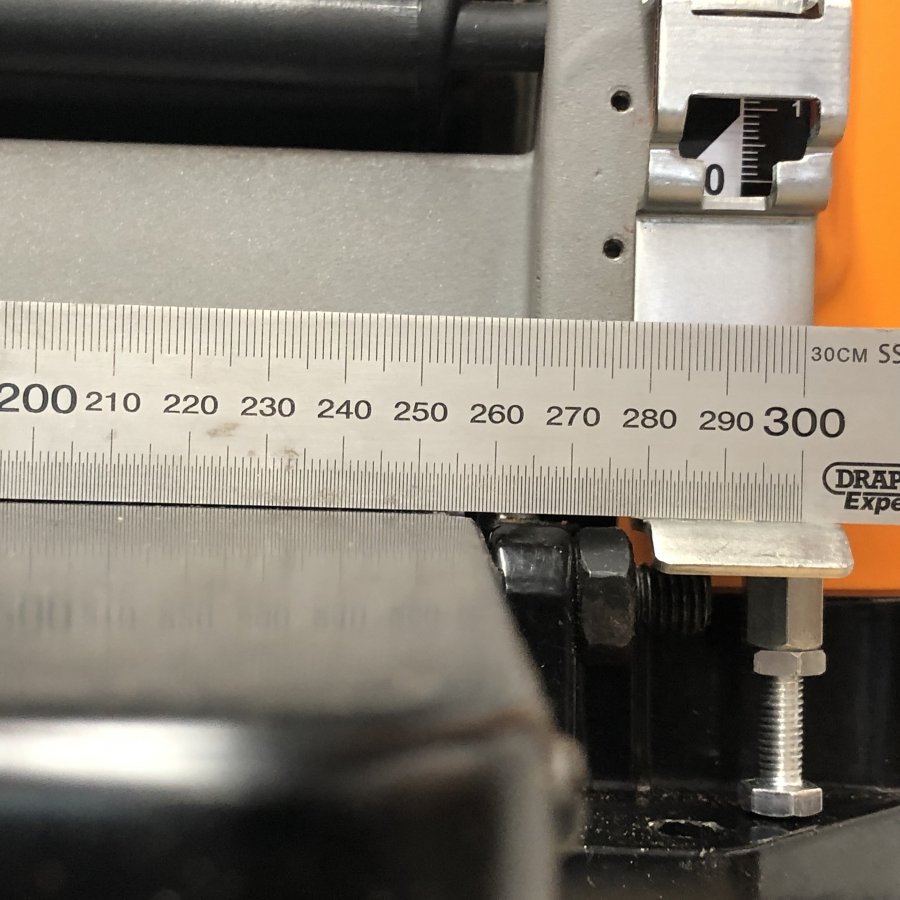 Next problem was the bracket to attach to the display, the holes don't line up with the 2 holes left by the screws we removed when taking off the indicator. 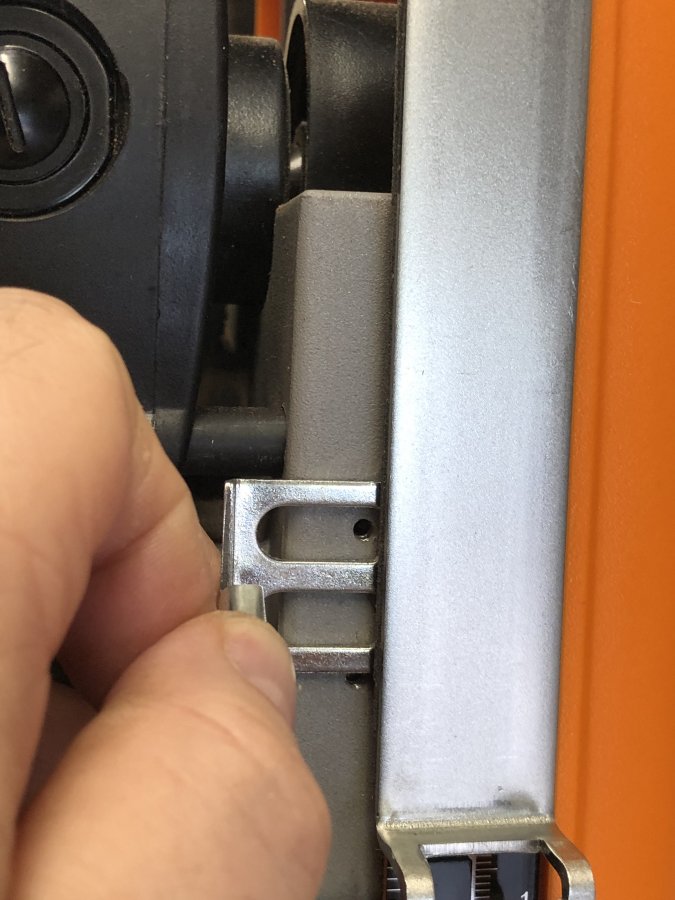 The instructions do say (and I missed this part!!) that 2 self tapping screws are provided if you can't line up the holes, and to use the supplied drill bit to drill new holes and then use there supplied self tapping screws - you can take that option but I went round the houses and tapped a single hole to reuse the existing screws. Only problem was then, it was difficult to access for drilling, so I took the side of the casing off.. 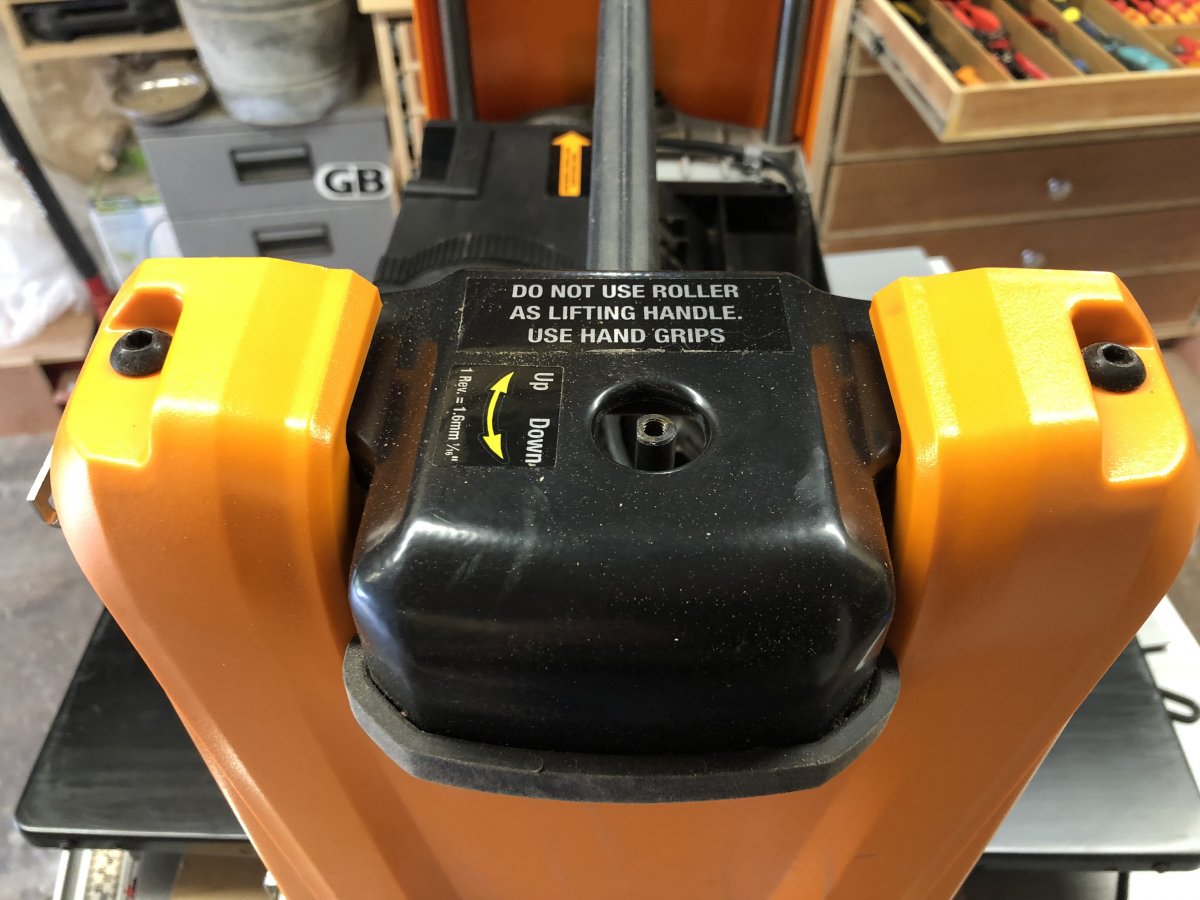 This gave me the opportunity to remove some excess tape from the rear of the gauge, there is about 1mm worth of tape that overhangs the casing and will rub against the 2 screws that we will use to hold the bracket on, so I remove this too. 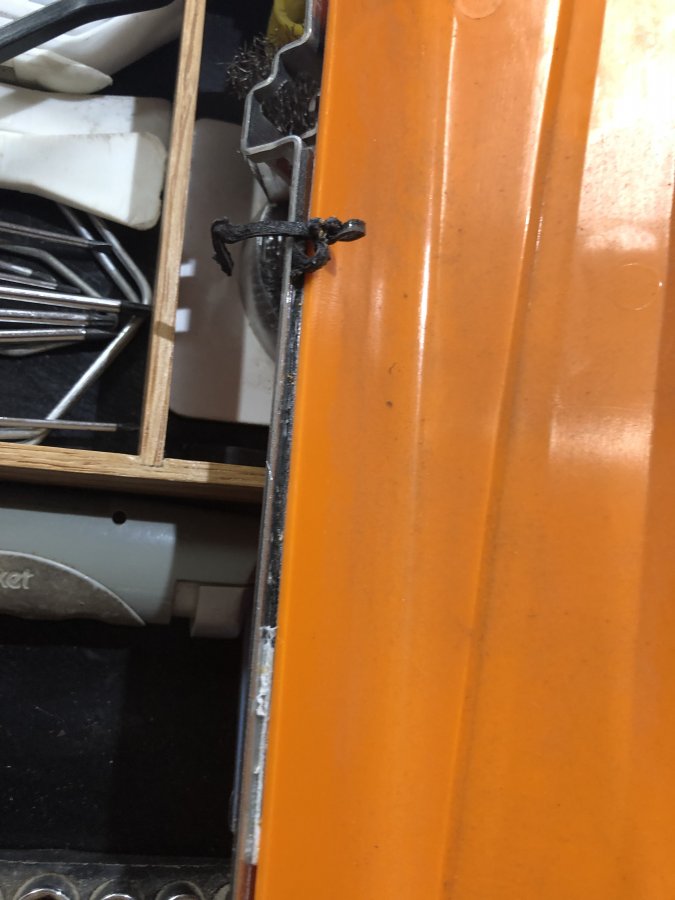 Hole tapped, and bracket loosely screwed in, don't tighten up just yet - leave it for later when the other part of the bracket attaches to the digital readout - the idea is that the moving head of the unit it fixed to the digital display, and this moves up and down the fixed gauge. 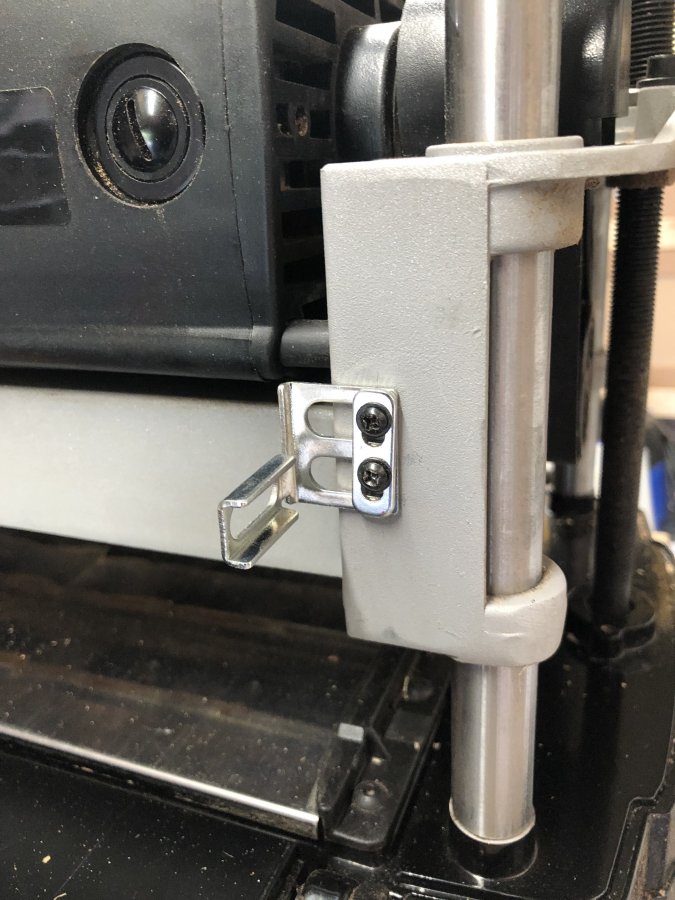 Re attach the side panel, and then add the sliding gauge, slip this through the gap on the digital display and then re attach the tension spring 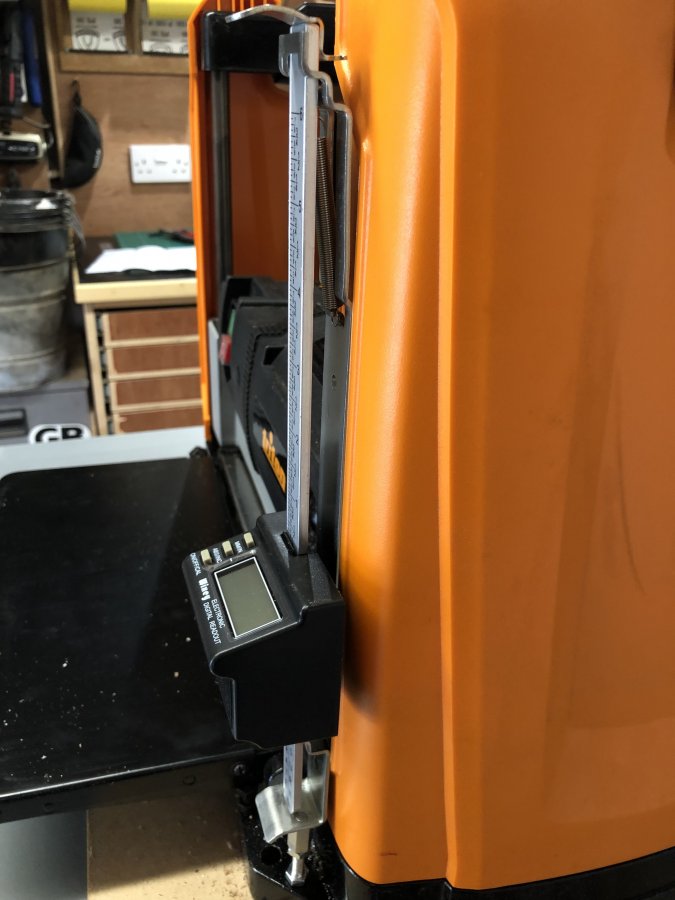 Here you can see the platform or 'foot' that you put in your planed piece of wood, and the gauge with the round bottom slides up under tension from the spring. Also the bracket attached to the planer head ready to attach to the digital display. 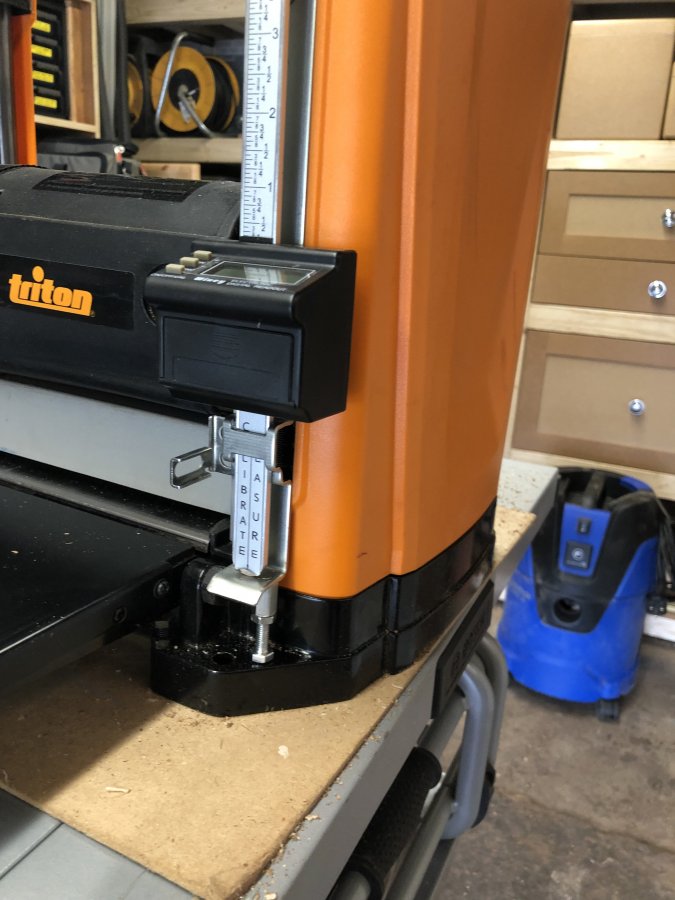 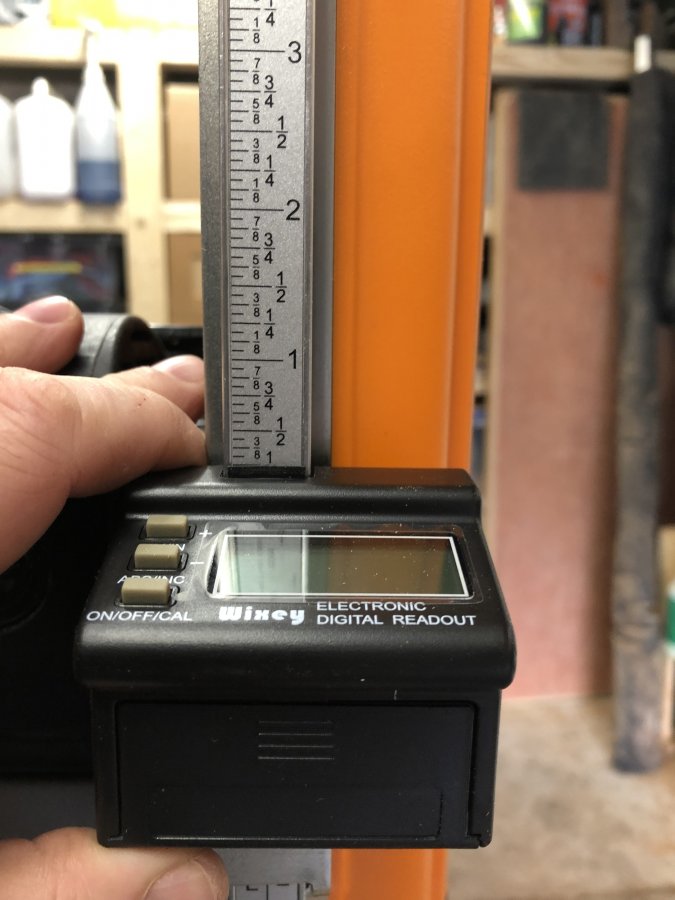 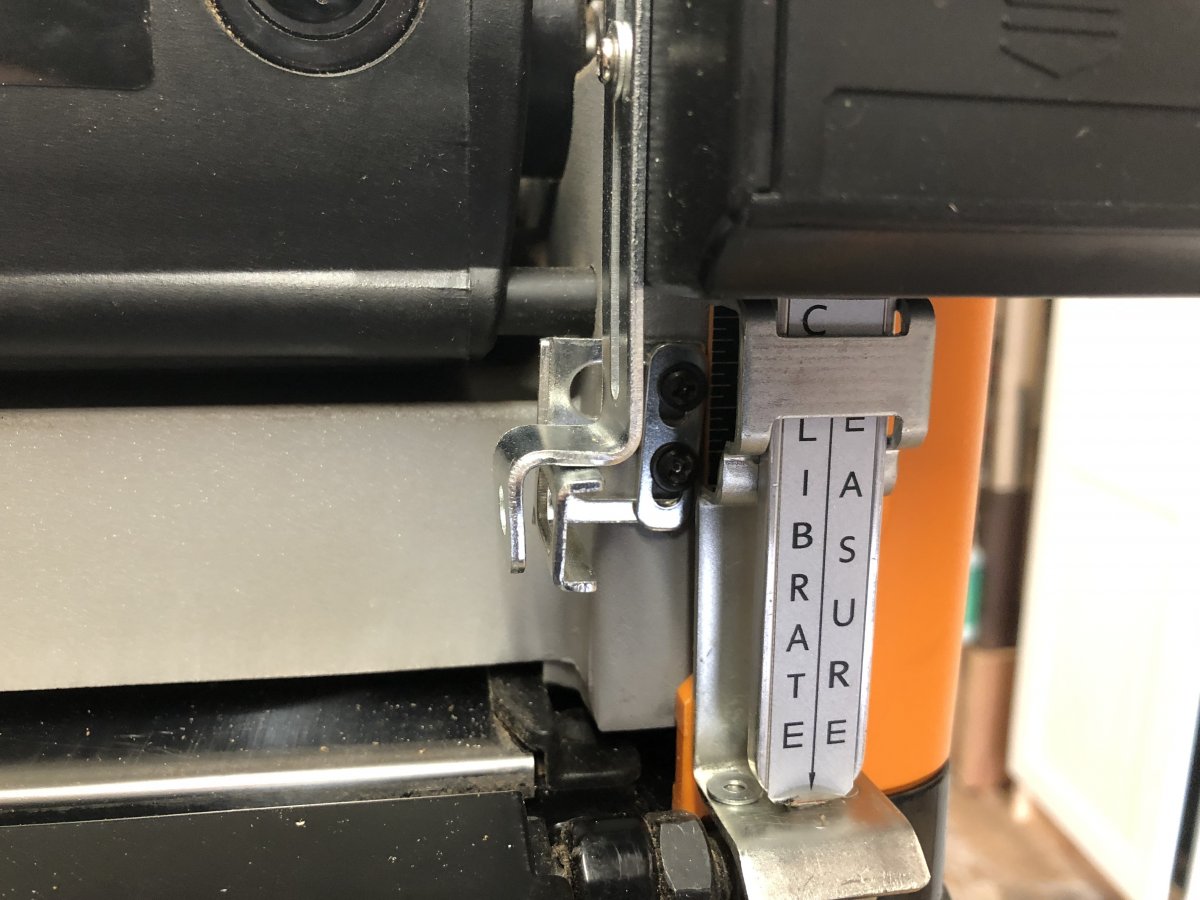 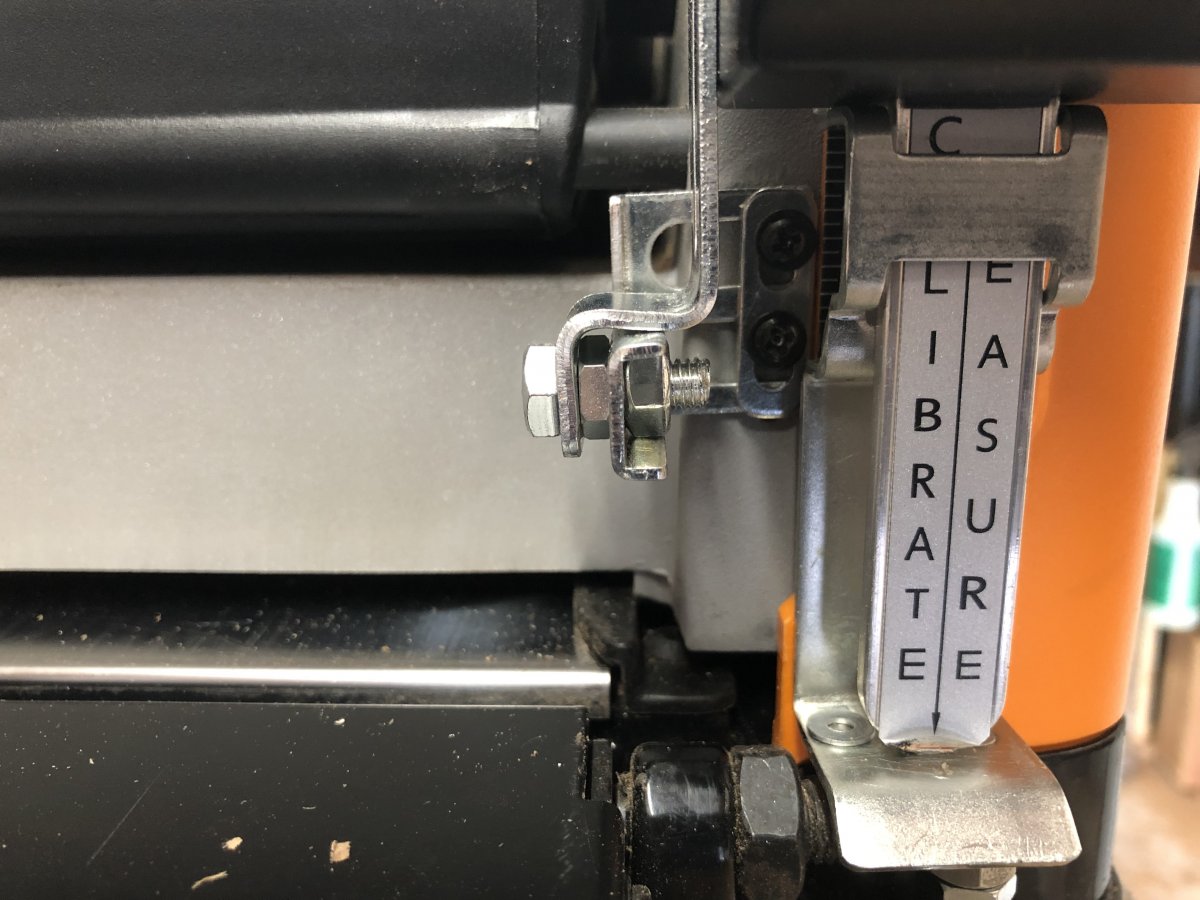 Thats all the spanners and screwdriver work done, and the gauge is now ready to be calibrated 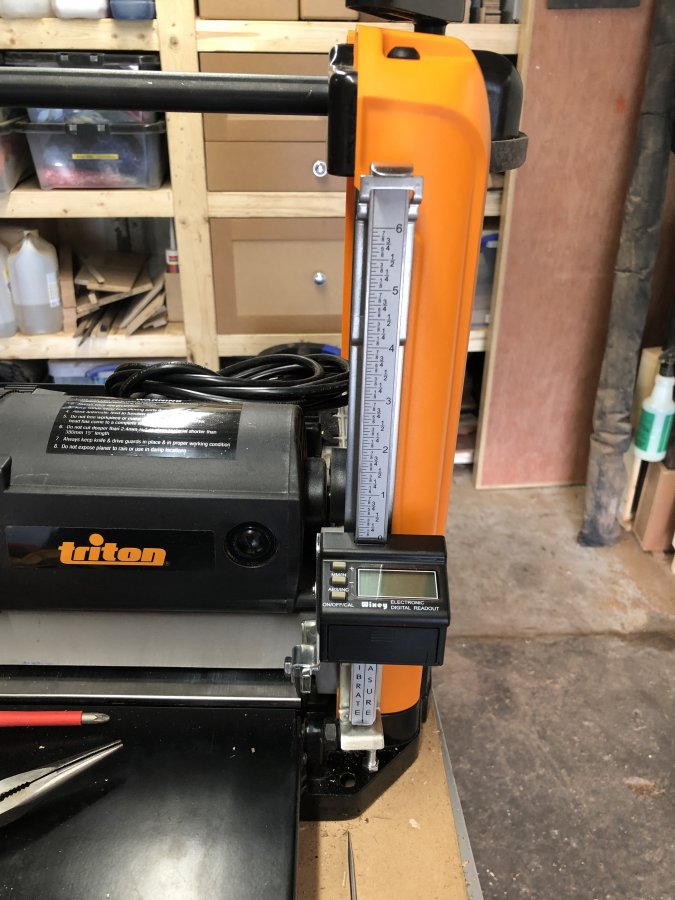 Take any piece of timber, adjust the head of the planer to make contact with the timber, and plane a bit off (1mm or so is fine)
Once planed, don't touch the head, but lift up the top of there gauge where there is a little thumb recess. This will lift up the gauge and allow you to put in your planed piece of timber, press the calibrate button which zeros out the display, and then remove the wood which will then give you a reading showing its thickness - check that with your calipers 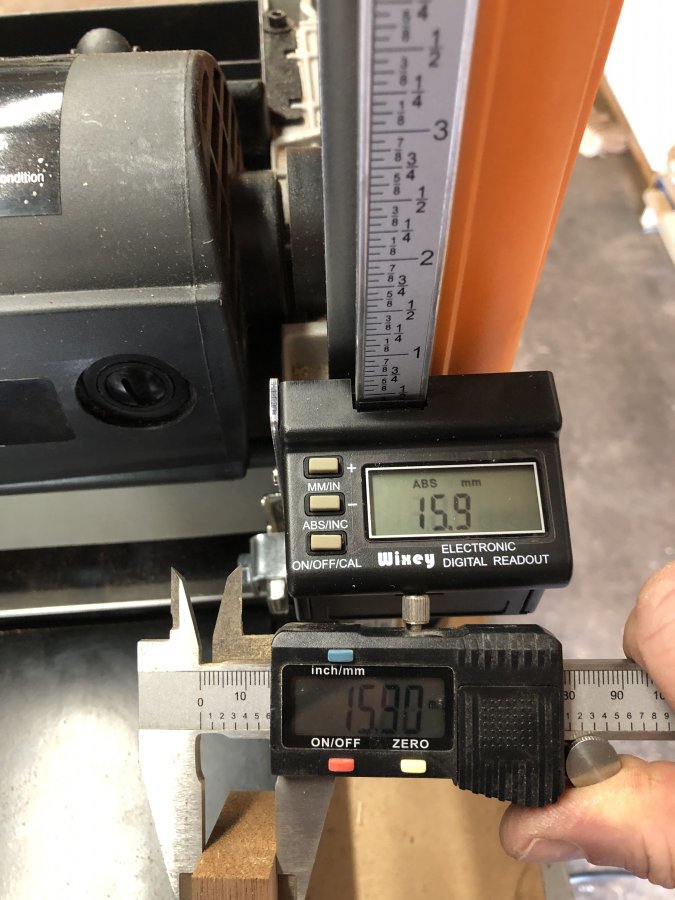 And that's it, works well - its not perfect, when you adjust the height of the cutting head slightly, it sometimes doesn't pickup the change straight away, and so can be .01 of a mm out but a bit of trial and error moving the head, watching the gauge and you will get the hang of it. 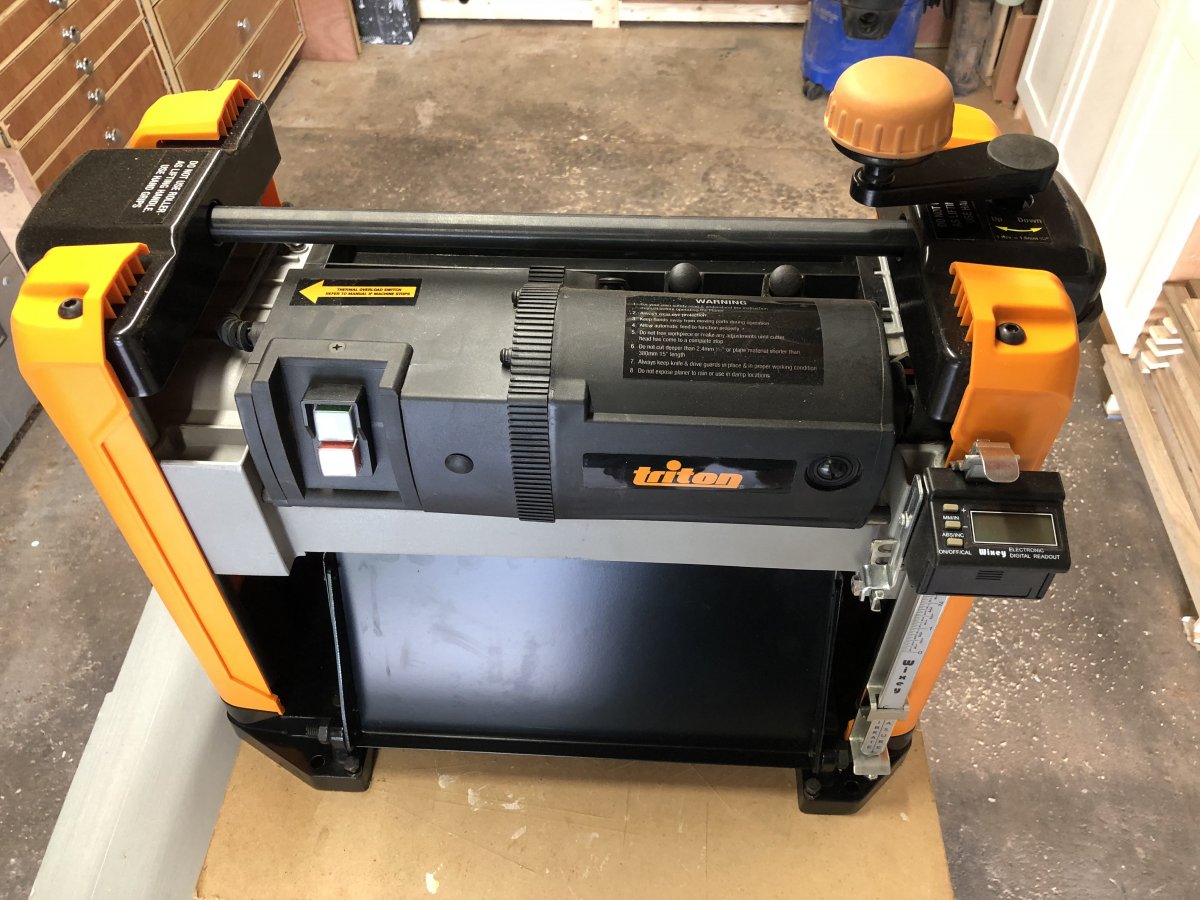