Found in a farmyard - is it worth fixing?!

Seems too good to scrap. Anybody know anything about the manufacturer? 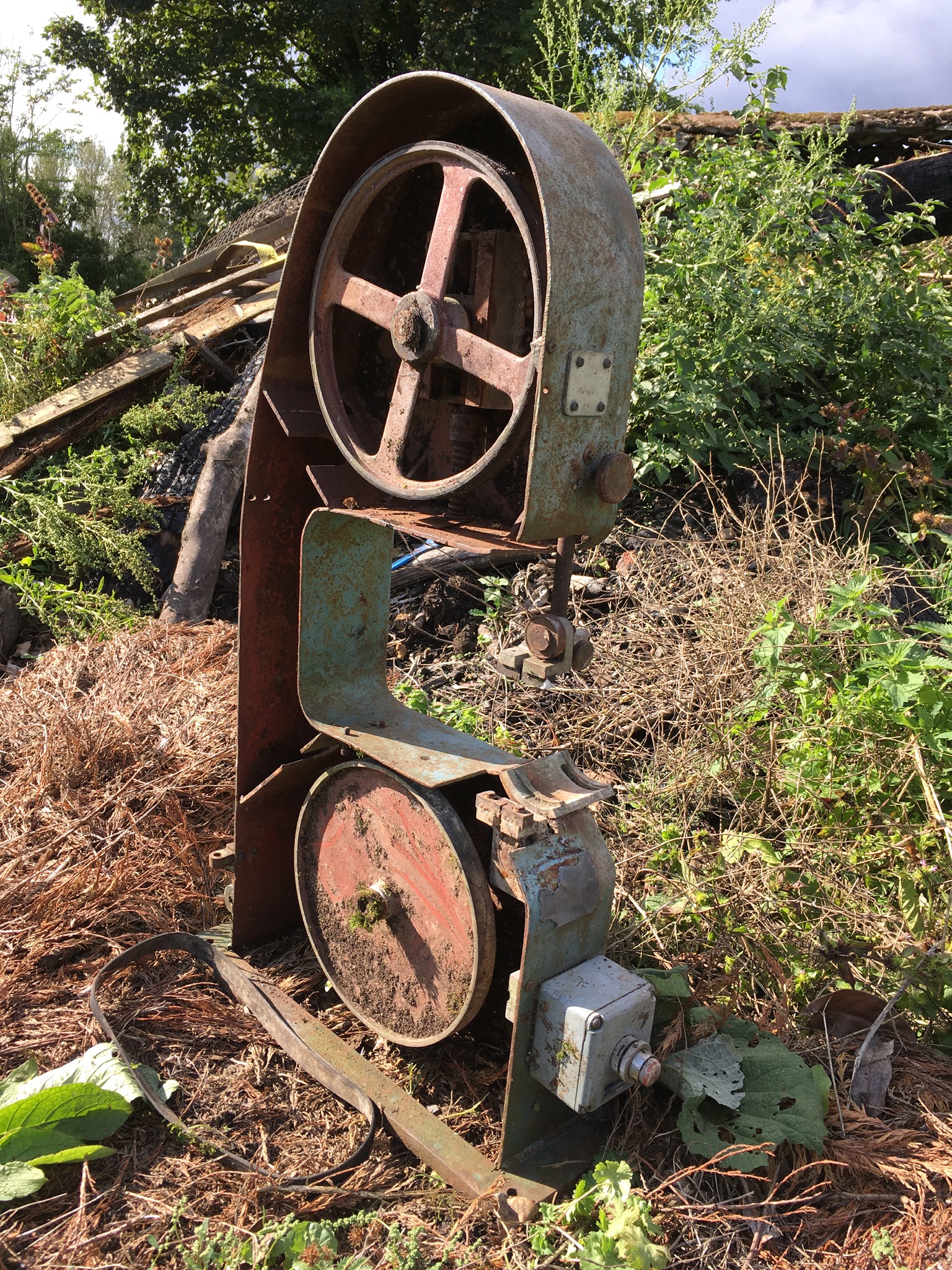 Any sign of the table? It's just scrap without it. That might be part of the table tilting mechanism, lying in the weeds just to the right of the machine.

I'm all for resurrecting things from near death, I've done it a few times, but this is pretty much only good for scrap in my opinion. It's a shame because it looks like a great little machine otherwise.

Unless you've got the table hidden away somewhere it's not really worth the trouble trying to cobble something up although you could. The wheels will probably need re-tyring because the rubber will have most likely gone bad, I think that's a tyre on the ground?

You might get £5-10 scrap on a very good day, I'd put it on eBay and see what happens if someone fancies a proper challenge, or even disassemble it and sell the parts, someone might want the wheels for a home-made bandsaw or something.
M

Thanks for your replies. I’ll have another look around tomorrow and let you know if I find anything.

Farmers dump stuff for a reason. My (family) experience of farmers is they run stuff until it is double knackered. Then hide it in the bramble patch.

What other bandsaw do you have?
Chances are its a lot better than anything you could buy now with the same capacity.
Clean the field and get a metal detector around it.
Buy a used welder for about 40 quid and make up what you need.
.
An equivalent modern saw with that stout a frame would probably be in the
20" size, able to honestly tension a good stout 3/4" blade for resawing.

The only thing that I would be concerned with are whether they are babbitt bearings or not, if so, there is a site called OWWM which has many folks with machines of that era, but either way I would be doing it up.
Modern bearings are only a fiver each, the fact that it's not line driven belt suggests possibly modern bearings.
Keep an eye out for a motor if it turns out to be no good upon inspection,
I'd even take the tires if not cracked (more than likely are) , gasket rubber can be bought for cheap, someone posted a link for that here before.

Belts can be bought from lawnmower shops for less than a tenner
Not much to a bandsaw really, worth doing up if ya don't have one.

Apart from the table are there doors to cover the wheels/ bladder with it, I wouldn’t fancy using it without them.

Doug B said:
Apart from the table are there doors to cover the wheels/ bladder with it, I wouldn’t fancy using it without them.
Click to expand...

I wouldn't be bothered if they're missing. Welding up new ones wouldn't be too hard, or you could even make some nice wooden ones. I mean, I agree that it shouldn't be used without doors, but my point is that new doors are easy.

I suspect SquareD didn't make the saw, just the switchgear fitted to it.

Actually looking at it again it looks like a Whitehead Junior Bandsaw, I remember there being a similar shaped one in college years ago.
N

How about turning it into a bandsaw mill...?

As others have said the table is the primary worry, however next up would be blade guides and tension system. Even with the table you could spend muitlple hundreds sorting motor and switchgear, pulleys, belts, bearings, wheel tyres, guides, fence etc. If your after a challenge,and can find the table and mounts, then go for it! If your after a robust, old school bandsaw, I say keep your eyes on gumtree/eBay and buy something that is not working but not quite so not working as this one!

Ok....only closer examination might suggest why it was dumped. If you want to take it on as a project then do so but first make sure it is
repairable. Mike G and AJB Temple gave for the most part proper professional advice...

From me...from the outset...do not be deluded, bandsaws have created some ghastly injuries..You also received poor advice insofar as "Buy a used welder for about 40 quid and make up what you need"...This is not an answer unless you are a skilled welder in which case you will likely have a welder. I learned welding at Tech college and inspected it in some government projects. DIY is considerably different. Over 95% of 'DIY' welding I have seen, is atrocious and can create danger in relying on it. The voltages current application and penetration are abysmal. Home built box trailers are one example.

Yes...square D is an electrical manufacturer...not a tools manufacturer. I don't agree with Mike G on building doors...they need to be precisely built, resist vibration and close firmly. If restoring I'd be looking for original parts.

The really annoying thing in restoration is when you spend ages cleaning restoring rebuilding and then when looking for spares find one in good condition for a fraction of what you spent. I suppose that has a 'good' and a 'bad' side! The position of the square D switch is poor and should be in an immediately and logical reachable position and have a mushroom headed emergency stop. Obviously this saw was on a stand or bench. Personally?...I can't see anything in it worth the effort of restoration.

I wouldn't restore it unless just for the hobby. There's a reason we have scrap-metal dealers and a reason we can look around and buy pld
and interesting tools in good "nick". That's a very belated reply but might give some sound thinking to others who come across the original posting and as did I, feel an interest.

an easy fix if u play with metal.....wish it were near me.....
something like that but running here in Crete would have an asking price of around €3000.....
YES, THREE GRAND and it would sell.....
lucky I bought mine with me.....
some German made floor standing thing but dont rememeber the name.......
only prob it's single speed.....but that will change.....

It is a junior Whitehead bandsaw, as previously stated. Looking at previous sales on epay they seem to go for around £300, although one went for just £35 - for parts/not working, it looked complete though. Unless the table and front cover can be found I very much doubt it's worth bothering with. However if you are into restoring things (and some folk are) then the economics may not matter a jot.
I think the tensioning system still looks to be there. Rubber or rubberised cork can be bought for not much. You could use something like 18 mm birch ply for the table, perhaps not bother with the tilt? thin ply for the cover.
It would make a good bandsaw for sure.
I'd like to see it restored, not sure that I'd do it though!
Last edited: 27 Aug 2020
P

Some pictures of what it could look like here
M

Thanks everybody for your helpful advice and information. Now I know what the missing bits look like, I’ll have a good search around the area with a metal detector. I‘m tempted to buy a fully restored one (or an easier to restore example) as it is a nice machine and just the right size for my workshop. Plus some of the bits off this old one might be useful for spares.

The only problem really with them is they don’t have much cutting height, if I recall it’s only about 4” or so.
J

Perhaps I will add to my observations that ply or timber is not the material to use in a mechanical restoration. These
machines are designed in metal to exacting spec's and whilst no one probably can stop amateurs remanufacturing
parts of them in timber, my approach would be 'don't'.

It's just a bandsaw. On a farm they popup as used sometimes for sawing slaughtered carcasses or being part of a
'bundle' in a clearing sale. I used one much larger than this thing in my father's factory and strength and alignment
are of the essence in mechanical safety, alertness and skill in the use. They cut very quickly between the fingers of
'high risk takers' and people in messy surroundings getting off balance a moment. Ok.. Swiss made is a plus but
you'd WANT to restore the thing as opposed to seeing it as a tool for much as I loath "Made in RPC" there is
reasonable DYI gear around if you seek well...or even do to second hand machinery places. eBay considers
itself above us, government and feeds government information about us but it is far from being the only
source of second-hand goods. Expand your vision to see a panorama and support small businesses. Patience
really is a virtue in restoration work....not becoming obsessive.

I'm also circumspect on amateur speed changing for band saws... Speed control is essential in drilling machines
as commonly the wrong drills are used for materials . In an era when (and Foyster was wrong) people use HSS
drills for timber, drilling at incorrect speeds. "sharpening" drills incorrectly, working off the side of
grinding wheels, not 'truing' grinding wheels, deep planing with power planes, forcing blunt tools into materials,
leaning on drilling machines, not uncommonly breaking drills , running drills at speeds which overheat them and
resist cutting, not reading the material coming from the drill, overusing sabre saws, unsafely using handheld
circular saws and so on it seems lost that there are optimum speeds for cutting and drilling various materials.
Varnishing and French polishing are today pretty much a farce. For that reason the exacting tradesman is a
great find.

My denial of 'Foyster' is based on that there are vastly less craftsmen amongst than when hand tools were primary.
What we have more greatly are 'tradesmen' out of touch with materials, learning poor techniques from utube '
experts', and numerous doing poor and incomplete apprenticeships. using power tools and nail guns, no longer
notching noggings into studs for example and working on the fact that 'it all gets hidden'.

I think my summary of the bandsaw in question is that it isn't anything out of the box but that a patient restoration
could give personal satisfation and perhaps some occasional use. As for paying eu3000 for one...are they cretians
or cretins? I wouldn't bank on that as a profit in waiting. That's all from me.

Trevanion said:
The only problem really with them is they don’t have much cutting height, if I recall it’s only about 4” or so.
Click to expand...

From what I've found on the internet it's 5" for the 12", 6" for the 15" model.
Hefty looking bandsaw for just a 5" limit but I guess it all depends on the user requirements. My bandsaw can cut 6" but I've only ever cut 5" and under. I guess that makes me a miniaturist woodworker.
Oh and it was made in Halifax, must be a really good bandsaw, well worth restoring!