I'm making a big ol' chunky desk (1200x540x90 top with 90x90ish "X" legs) for my youngest boy out of some *cough* premium dried oak sleepers. "Premium" is what Jewsons call them, not me, but they are apparently kild dried and stored indoors so it's the best I have on offer up here. I sifted through about 20 of them and picked out 4 with the straightest grain and fewest splits all for the tidy sum of just over £170 :|

The top is done but, for what I have left for the legs, I've noticed a few patches of what can only be described as "pee stains" in a few places. I would post a photo but it doesn't show up at all well with my camera. It's a fairly bright yellow against freshly planed oak. From what I've googled, the staining could be as a result of being kiln dried too quickly if that sounds right?

There's only a few small patches which I can work with trying to hide them. I'm wondering about the staining interfering with the finish (Osmo PolyX or Danish) in some horrible way and what impact they may have as the wood darkens with age. I can set-to trying out finishes on small sections but figured any knowledge anyone can drop on me in advance would possibly save some pain down the road...
P

First thing, wipe some white spirit on the planed surface. That will give you a good idea what it might look like under finish. It's possible that the colour contrast will largely disappear.

If not, others may have something to suggest - I know that wood bleaches can help remove dark stains, but no idea about pee stains!

UV light (sunlight) will darken the wood, but how far it will tone down the stained parts you can only tell by trying. If you have an offcut and know someone with a UV light, you could give that a try.

No sleepers are fully seasoned. They're entitled to call them seasoned after they've been cut for a year ....but a sleeper will need about 6 years to season properly. There is no way on this planet that Jewson's sleepers have had that much time in stick. Expect this desk to check, shrink, and wind. That needn't be an issue if you've allowed for it in your design and are accepting of a "rustic" appearance, but if you've not allowed for movement you are going to have a battle on your hands in the next 6 or 12 months. The biggest issue could be with the legs if you have sliced them out of full pieces, because they are going to dry differentially (the original outer face will be drier than the cut faces).

I'll give the white spirit a shot and see what happens but I fear I'll likely just have to take what the UV aging has to offer. Hopefully the stain won't turn bright green and start flashing (homer)

@MikeG: It's most definitely a rustic desk - wire, nylon and sisal wheels are to roughen up planed surfaces and splines will be added to the few checks there are at the moment. The top (it's a two-man lift weighing ~50-60KG) will be allowed to expand and contract with either buttons or slotted brackets and some free floating vertical tenons (tight in the leg tops but with slightly elongated mortices in the top) to allow the top to expand/contract but fight racking if that makes sense. The legs will have a stretcher for further racking prevention. Something like the following but the legs being oak: 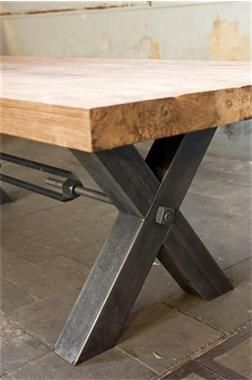 But I do hear you about the legs. They came from 200x100 sleepers and have indeed, been ripped down the middle (producing dust rather than soggy mush IIRC), taken to rough dimensions
and left in his room for a couple of months now. There's been only slight changes and no bananaing as yet. When picking them, besides looking for straighter grain, I avoided any with heartwood as that shrinks the most, right? I've made stuff from the same source before and it certainly appeared that way.

The plan for the legs is to (excuse the lack of vernacular) trench them each half way to form a X. Any shrinkage of the mating surfaces will weaken the joint quite some ways so I'm scratching my chin a bit about how best to orientate them to minimise this. All 4 legs have a quarter sawn face which I had been thinking would be nice kept in pairs and have on the external ends for show. If quarter sawn is the most stable it may serve better to stuff aesthetics and orientate said faces facing each opposing leg (i.e. trench the QS faces to form the joint)? Maybe that's back-to-front. Any wise words on this would be much appreciated as I do like to overthink things... even whilst not knowing much to begin with #-o

I'm sure a couple of pegs through the leg joints would help but, from back-of-a-fag-packet drawing I'd think they be around 12mm diameter (assuming 90x90 cross section and a ~16mm hole for the "turnbuckle" stretcher bar) which maybe wouldn't add all that much. A wooden stretcher with a through tenon would help but is a less preferable option. I'm not adverse to it if anyone brighter than I says it's the way to go.

Rather than do a full halving joint as you propose, why not take a third out of each leg and have the faces finish in different planes (ie non-flush)?

The trouble with quarter sawn timber for legs is that you get 2 nice faces opposite each other, and the other two look very different indeed. This is why rift sawn legs are the traditional best practise.

Offsetting the legs, rather than flush, is an interesting idea. But would it be strong enough for a 55kg top? I'll will play with that idea though. I'm aiming for bombproof however as my lad, while only 8, is prolific in his ability to break *anything*. It is with some pride I say he's yet to do anything major to the bed I made him several years ago!

OK, let's look at the strength. If your legs are ex 100 x 100 they'll probably end up around 94 or 95mm square. Take a third of one of those dimensions out (for the halving joint) means that the structural size at the junction, the weakest point, will be about 95 x 60. A 55kg top shares its weight evenly between the 4 legs, so will have about 14kg going down each piece of wood. So, can a piece of 95x60 oak at an angle support 14kg? Being as it would support your bodyweight within reasonable deflection limits if it were a metre long and suspended at the ends, then yes, it is strong enough to hold the top. That's the "dead load" in structural engineering terms.

Now, the live load is something else. This is someone climbing on it, falling against it, leaning on it, dragging it across the floor etc. Mere architects don't get to play with live loads. That's where structural engineers come into play, so you might want to alert Woody2Shoes of this parish and see what he thinks. Instinctively, I'd say you would be fine so long as there was some bracing preventing the piece racking end-to-end.

Have a virtual beer on me Mike and many thanks for the explanation. I'll definitely give it a good looking at and run it past Iagan to make sure it gets his thumbs up.
W

Sound advice here. I would just reiterate about the sleepers; no way are they going to be seasoned and really thick stuff takes an absolute age to become suitable for making furniture. As Mike has said, make sure you take into account all the splits, shakes, warping and twisting that the oak is liable to do as it drys - Rob

Yep, I've tried my best and think my expectations are in the right place. It will be a rustic affair for sure. I had a better idea this time around of what to pick out of the pile compared the last sleeper project... which hasn't self destructed after 3-4 years... so here's hoping.

The legs are coming along nicely and I went with Mike's idea for not flushing them up. I love the look of them and SWMBO even made agreeable noises too which is a complement given their not made of wool (hammer) Boyo even helped knock in some butterflies last night much to his delight.
C

Nelsun":22hvrf1u said:
I've noticed a few patches of what can only be described as "pee stains"
Click to expand...

I've written about this at some length in previous posts. It's called "yellowstain" (try searching for it on this forum), I don't have the time to go through it all in detail but it's a growing problem, especially with Oak, and it's basically down to intense price competition amongst timber yards causing them to rush stock through accelerated drying programmes.

All the furniture makers that I know now restrict their Oak purchasing to a small number of premium yards that conduct their own drying and kilning (the vast majority buy in ready dried stuff) and will stand by the quality. You pay a bit more but yellow stain isn't fixable at the finishing stage and it looks horrible, so IMO it's money well spent.

Thanks Custard. My "googling" did encompass searching here as a first port of call so I think I've found most of your previous postings mentioning it. I've managed to hide what small bits that I couldn't chop off so it should be good to go. Nelsun Jr. has certainly enjoyed helping out with it along the way.
You must log in or register to reply here.
Share:
Facebook Twitter Reddit Pinterest Tumblr WhatsApp Email Link