He's a very clever bloke - its well worth looking at his back catalogue of videos. For my money, one of the best metalwork content producers on youtube - his videos are extremely well produced and the stuff he makes is top notch. The workshop is I assume on the books of his business as his R&D department.

Thanks TF (hope you don't mind me "shortening you" to that?), he's one I haven't heard of before. Based on what I saw on the vid you linked to above, I'll have to find the time to see more more. Certainly a VERY impressive shop & set up.

Mind you, your "little hovel" always fills me with more than a little envy mate!

AES said:
What does it cost/how long does it take? And is it worth it unless it's for a very special file (though I agree in advance, new files are getting pricier, and decent quality somewhat rarer too).
Click to expand...

Don't know the answer to either of those questions. The gent who transported them from the UK to the USA paid for them as I had allowed him the use of my lathe & workshop. Then covid stopped all travel so they have been sat in the USA for at least 12 months, probably longer. I will ask when I see him next.

OK, thanks Robbo. Just "mild interest" on my part.
F

As an aside I find a good cover for your files is the oval section plastic electrical conduit. If you befriend your local electrical contractor they may well give you suitable sized off cuts.

Since doing that piece on files, my "pet home seamstress" has made some "tool rolls" for me out of old jeans material, so my present files drawer does look a but prettier than it did in the article, especially for the smaller files like warding, Swiss, needle, etc. But just about anything is better than allowing any files to bash their teeth together without any protection.
T

Results video from the fireball tools file test. Quite interesting!

The only thing I could pick at, is if might make a difference drawing back on a saw plate.
I'd guess not as radical as I would have imagined before watching, if there is some truth to the old adage at all.
Makes me wonder how bad having them lightly clang together in a pot or drawer is.

VERY interesting. Apart from a wonderful shop set up though, there are a couple of "statements" that I can't agree with (personally) AND go against what I was taught.

My prime disagreement was with the amount of pressure being applied during the back stokes. He admits this is "higher than he would ever apply when filing by hand" and I THINK (do NOT know) that therein lies the "problem". I was always taught that the back stoke pressure is "very light" ("only just touching"). That light pressure does 2 things - 1. - keeps your angles set up for the next cutting stroke (AFTER practice!), and 2. - VERY important - allows the chip breakers to clear the swarf efficiently.

BUT, at the end of the day, who cares really??

I have "my way" and "he has another way". If we both end up with the job finished within a reasonable time and with acceptable results ("acceptable" varying as per the needs of the specific job of course) - and remembering that these days, there's typically not all that much filing done anyway - as said "who cares really?"

But thanks for posting, v. intersting James

Ttrees said:
Makes me wonder how bad having them lightly clang together in a pot or drawer is.
Click to expand...

Again, most probably just me and my favourite "bee in the bonnet"! BUT I do have some files with chipped-off teeth and as far as I know, that can only have happened when they were being clanged together.

But again, perhaps I'm wrong to get all worked about about it. If you want to, just try storing some files where their teeth can clang together. If I'm wrong and after a few years you still have files with undamaged teeth then you'll know I was wrong! Myself? I shall not be trying. It takes so little time and effort to store them all "safely"!

I don't have the space for all of mine, so the large ones stay in a wine cooler stainless pot, and the smaller ones in the box.
I pick it up as it were full to the brim of water, it's taking them out which is the bother, which I also do as carefully as a jenga or buckaroo game.
The double walled pot amplifies the sound, so you likely would not be pleased.
I admit most of them are cheap ones, nearly have a second of all the most used, but do have some old fresh ones too, which are course and sharp.

The round files I find are the most replaced ones, I've only noticed them dulling, well maybe some half rounds also.
Maybe that's because I likely buy middle of the road ones for a fiver when I need one, and get some more back ups when I see cheap ones.
Not done that in a while, as there is no good pound shops locally. 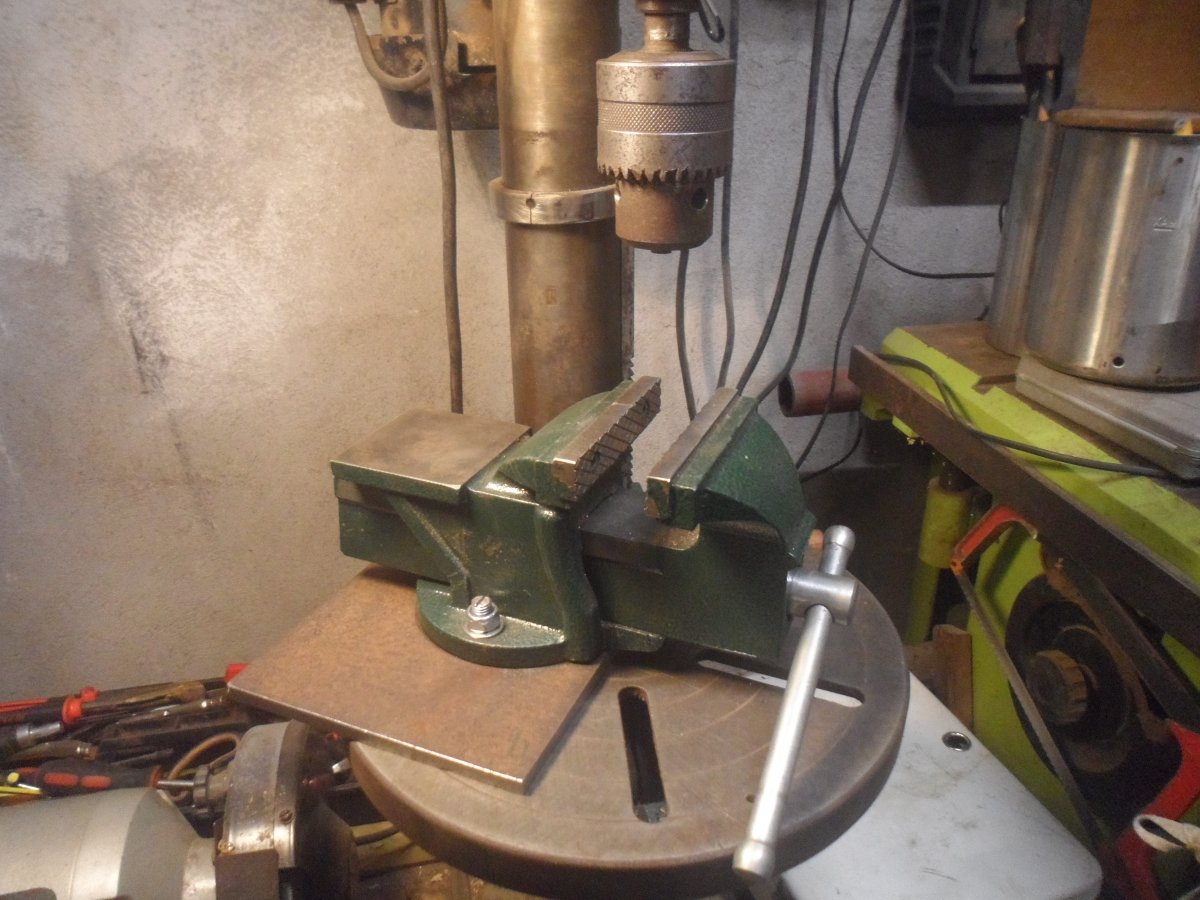 I'm glad to take the chance of not having to be so annoyed with one or two files,
say like a regular round file making slots, the work can be done a good bit faster, especially if in an awkward spot.
Whether it's a myth "busted" or not, I guess it could well be that it was to discourage the apprentice from using a shorter stroke of the file.

Keen to see more studies on this.
Still gonna play by the rules with one or two of the fancy ones I've collected, they don't get used for much.

Yeah Tom, if you've got a fairly large collection, (and if you use all/most of them regularly) then I admit that storing files does take some space. With/without handles?

That was a problem I had until I scored a metal tools cabinet (with lots of drawers & adjustable partitions) from a bloke who was retiring.

Just an idea, would a block of wood (or even a couple of blocks) with several holes of different dia drilled all over go any way to solving your problem? Just an idea

I had thought about making some sort of dividers, but its just one of those roundtoit things I suppose.
I think I would lose space, and need another pot, say that kettle pot might be handy, but more prone to tip over which might be more harm than them touching occasionally.
I would like to have a nice cabinet for them someday.

AES said:
Very interesting Robbo, thanks for posting. As remarked when you first talked about this, the whole thing is completely new to me. What does it cost/how long does it take? And is it worth it unless it's for a very special file (though I agree in advance, new files are getting pricier, and decent quality somewhat rarer too).
Click to expand...

Had another file returned today, again not mine but have been told to keep it.
The system is that you post your files to the company & they assess them & send you the bill. The files are then sharpened & returned after about 2 weeks with the company paying the postage, USA only of course.
Each file costs approx $1.50 / £1.
Apparently he does a roaring trade at the Los Angeles woodturning club.

sorry just joined this conversation....
Can't find the photo but a guy I knew used pastic drain pipe off cuts for his file storage....
different diameters and colours for the diff shapes of file.....it bit like a post box sorting pigeon holes....1/2 the style but neater than a bee hotel....
they all stacked together very neatly, he used a blob of silicone to tie it all together but this would alow it also to be modified in the future....there was a peice of ply to make a book end and alow the the rest of the shelf to be used.....
I have at least 40-50 files and this system is what I'll use in my next workshop....
I dont like em all clancked together either...
C 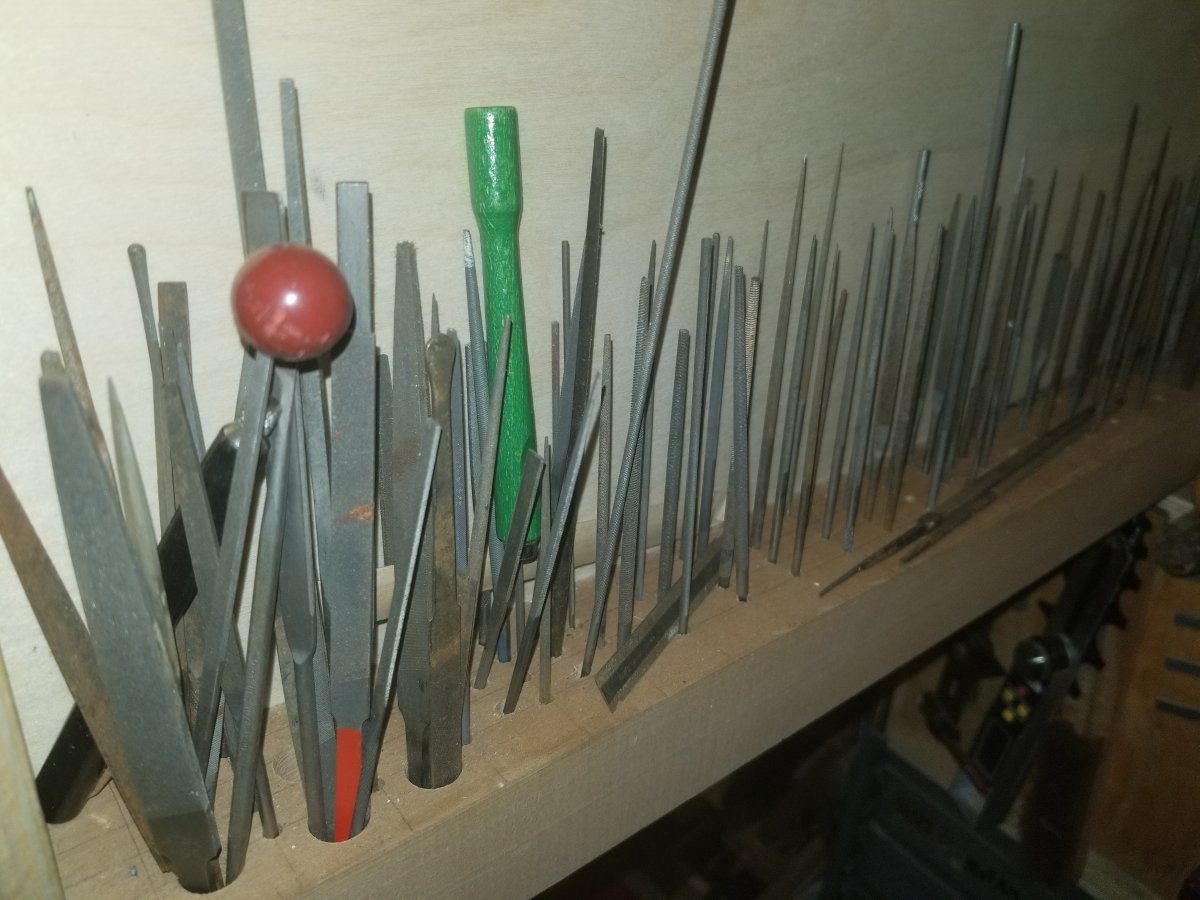 I wonder how the rough cut file got its name.
Maybe somewhere along the lines of 'S**t, I've taken too much off, its the fault of this b**tard file'

files to make round holes square

C
Looking for a type of file but I don't know what it's called.
2

Using a hacksaw cutting big(gish) stuff. Or how to saw a railway line.
4 5 6