Now i know these are rubbish for dust extraction (I have the Bosch Glide Saw)....But my question is. Is it better to have it connected to a vac? or directly to my main dust extractor?
R

I have a Makita LS1018L and the dust extraction is rubbish. 50% of the dust doesn't actually go in the tube connected to the dust port. I've tried both shop vac and extractor and neither make much difference. I just have the bag attached now.

As mitre saws tend to spew dust all over, I think you'll have the best results with an enclosed mitre box, hooked up to a large extractor (not a shop vac).

I have a Festool Kapex which is actually pretty good on the dust extraction front with most cuts but once you start cutting compound mitres etc it's not much better than the rest.

Technique makes a lot of difference, pull the blade towards keeping it above the wood you then drop it down in front of the wood and make the cut pushing back through the wood, this fires the dust up in to the chute. If you just use a chop saw kind of cut dust goes everywhere.

Using a shop vac keeps it simple and works well for me, comes on when you pull the trigger. For the Festool to work best everyone recommends a 38mm hose as short as possible, normally about 1.5m.

Doug71":3t50xu5t said:
Technique makes a lot of difference, pull the blade towards keeping it above the wood you then drop it down in front of the wood and make the cut pushing back through the wood, this fires the dust up in to the chute. If you just use a chop saw kind of cut dust goes everywhere.
Click to expand...

You kind of want to score as you're pulling back though. If you push through the whole cut, you'll get tear out on the top.
W

Decent vac I'd say. Bought a Fein Dustex which seems to collect a good amount of the dust on my mitre saw. Got a lot of suction power.

I have the 12" Bosch glide saw. As I move it around quite a bit I connect it to a cheap Lidl vac with a power take off. It works well and I don't really get any better result when I attach a hose from the shop cyclone (big machine).

There are various videos on line for simple modifications to the Bosch but collection - mainly centred around the flexible dust shield / chute at the back of the blade.

The extraction route on these saws is tortuous, and I prefer to remove the rubber right angled hose clip on at the top and connect the vacuum hose there (get s rid a of 90 degree bend) - but this sacrifices some range of movement so can't always do this.

These saws are very convenient but full dust collection is not their strength.
L

Inspired by Jay Bates I built something to house a Makita saw (a bargain from a nice chap on here!) The Makita was an MLS100 which seemed to throw the dust out from one port only so I left the shelf for the saw short of the back wall and underneath it I hung an inverted pyramidal box with a shop vac connected at the bottom. Most of the dust bounced off the wall, dropped into the box, slid down the sloping walls and into the vacuum below. Some of the dust would bounce back far enough to coat me and everything else for yards around. I tried sourcing some of the heavy grade rubber or plastic strips you sometimes see in butcher's shops' counters to prevent flies getting to the meat but ended up cutting and doubling up strips of an old shower curtain. This helped dirrect more dust towards the dust box AND was (mostly) flexible enough to allow mitre cuts. It worked well.

Last year I upgraded to a sexy little Dewalt number that ejects dust from here, there and everybluddywhere, all over EVERYTHING. As I rearrange the shop (AGAIN), I've been looking to address this messy problem. I started by positioning the saw on an oversized sheet of ply and marking the arc it covered for mitres to left and right as well as the bevel. That gave me this: 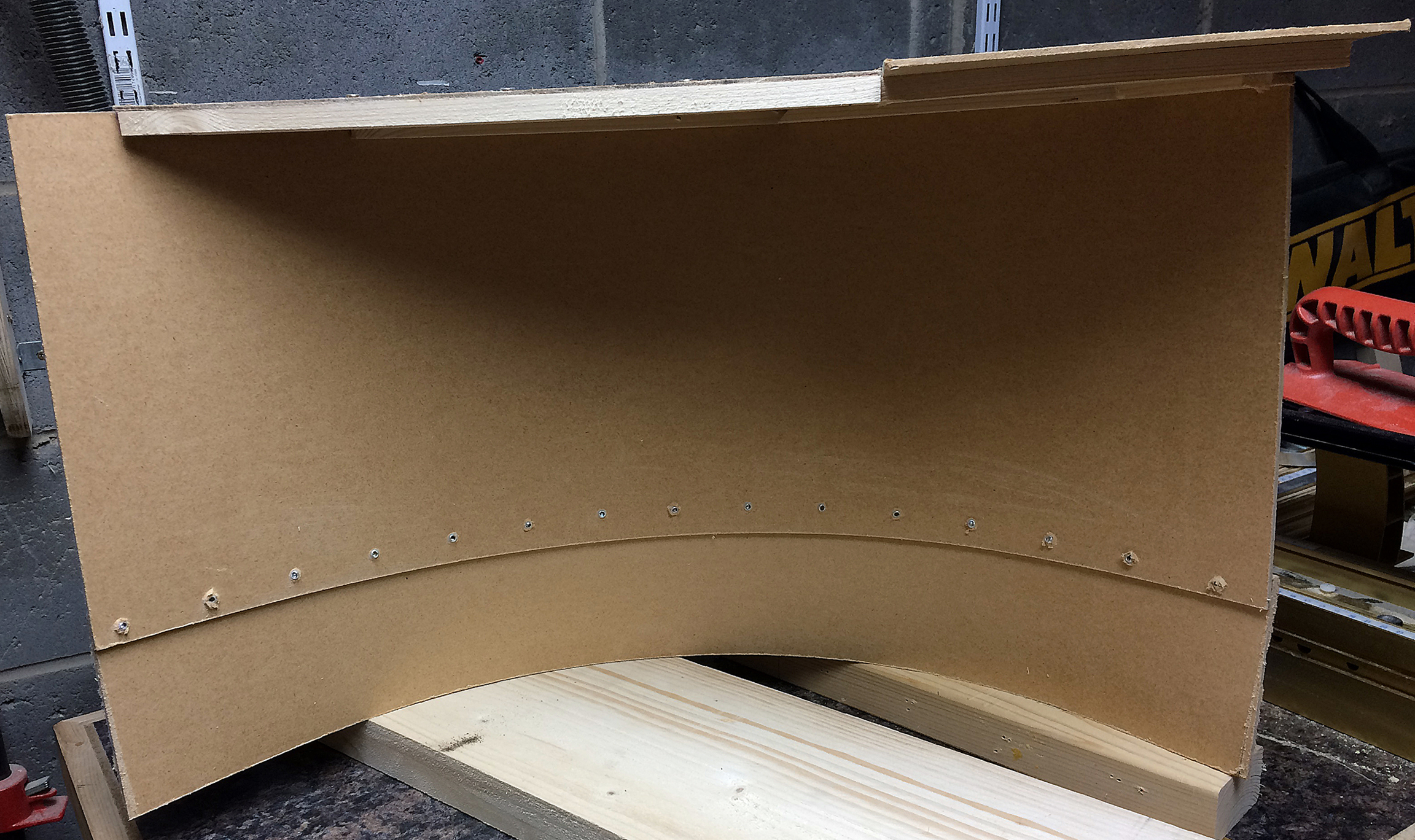 I cut a hole in the base board and connected the dust extractor to it. First test I couldn't actually see what was happening, partly because so much dust come bouncing off this backwall and into my face. There wasn't much dust immediately behind the saw so that part of the extraction was working well but there was masses of it to the left hand side and some - although nowhere near as much - to the right. I found out why on subsequent trials. When the light was right I could see the dust racing round the curve like riders on an old wall of death.

I gave up on any notions of trying to contain this with shower curtain strips and only briefly entertained a solid plywood wall that could clip on/off as required.So now I have this: 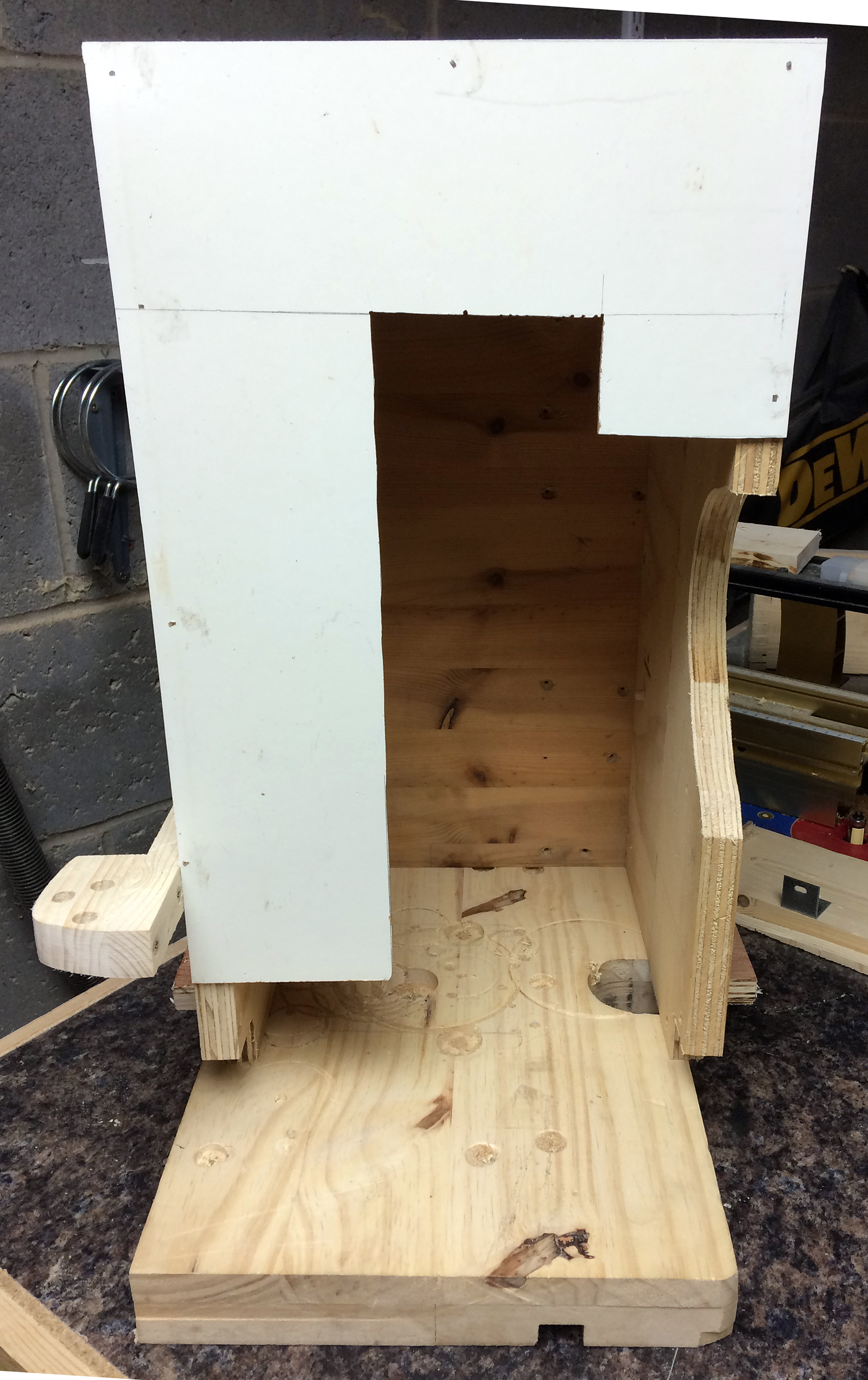 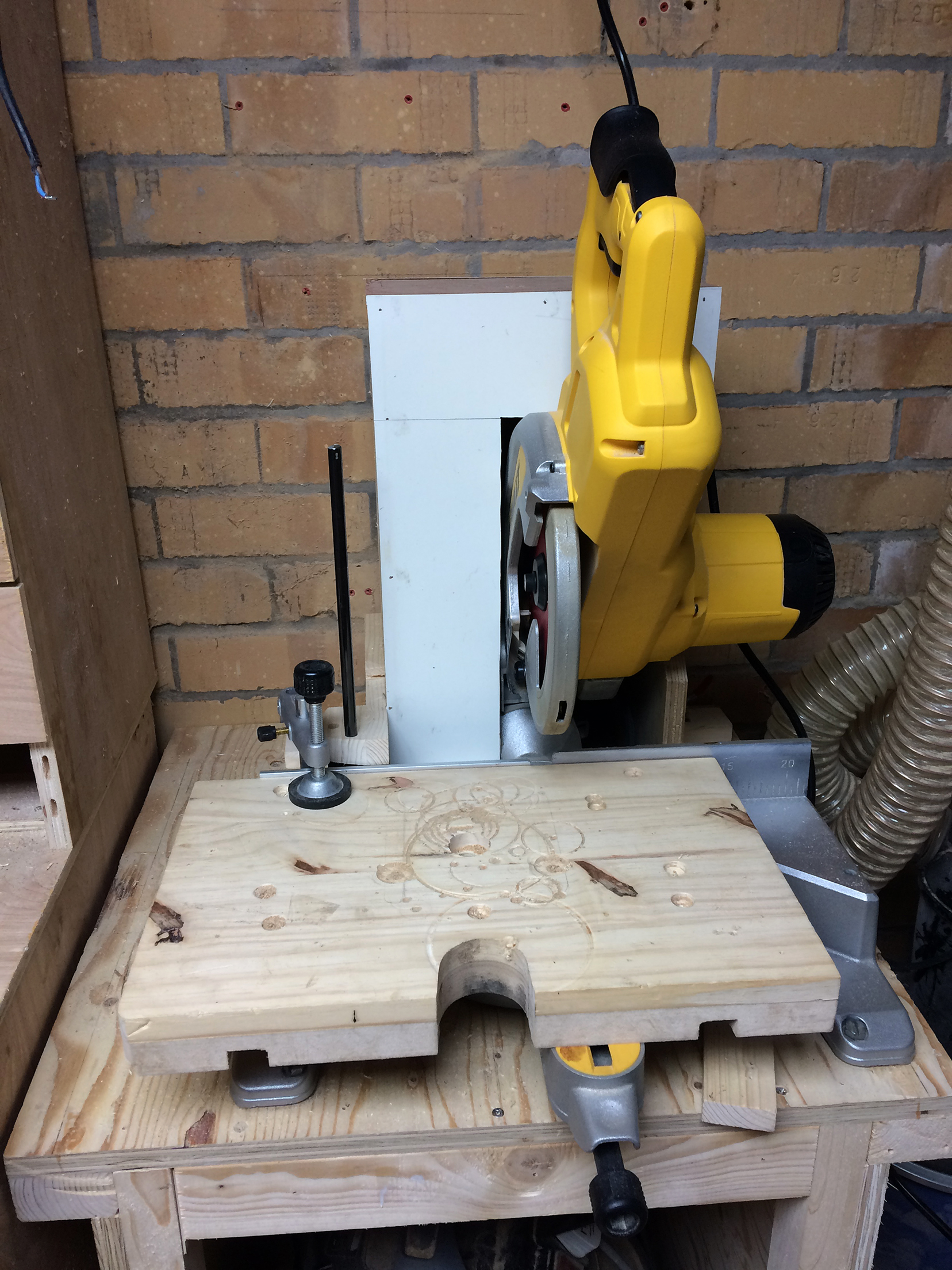 So far, it has stopped so much of the dust being thrown back into my face, there's next to nothing to the right and a lot, lot less to the left. That I think is coming out through the channel I'd routed to house the curved wall so I've been filling that up with sealant. Obviously this will only be useable fo 90 degree cuts so I've fitted wings to the outside of the walls and toggle clamps secre it in place while allowing for a quick removal for mitres or bevels. Still a work in progress but feeling hopeful.