I have literally hundreds of 13mm holes to drill in 18mm birch ply. Obviously id rather not be blocking the back side every time and speed is of the essence.
Could anyone recommend a bit that would give better results than the fisch brad point bit I'm currently using? I see recommendations for woodowl but they seem USA only.
R

Backer board is the only way I have found to guarantee a clean exit hole in almost any material. A good forstner with a sharp edge does a pretty good job but still not perfect every time.

I take it you're doing this on the drill press? Fix a clean backer-board down so it doesn't move (glue, double sided tape) and clamp the ply onto it before drilling - the breakout should be reduced if it is in (pressure) contact with the backer. You'll have to come up with your own method of making this faster by making some sort of jig - is this a component you're making?

Star-M don't seem to get a good showing in the UK. And I am only a hobby shed type (at best) but I stumbled on them early and have never looked at buying anything else. I've never used expensive western bits so can't contrast quality with those but they do a type (F) that reduces breakout.
(Be warned I found the entry hole to not be as clean as a traditional auger with spur mind. Worth bearing in mind).
Not widely available in the UK but Workshop Heaven sell them as do Fine Tools in Germany. 13mm bit is £8 and a bit quid at W.H.

Designed specifically for use in cordless drills, Star-M F-Type non self-feeding auger bits are available in a practical range of full and half mm sizes.

Here's an older thread about them where I was yet again waving the star-m banner.

I bought these Makita auger bits a while ago and not one of them gives a clean cut, despite having been sharpened (and sharpened again). They are useless. Am I paying the price for not spending much money? Incidentally I have a 19mm auger bit that I got free with some Simon James holdfasts and...

www.ukworkshop.co.uk
If I had the cash I'd buy a set without blinking and I don't buy sets.

Not saying this a better solution than backing board as suggested above but it's possibly an alternative/combined solution.
Last edited: 30 Sep 2020
S

Have you tried a router with decent flat bottom bit and make a jig to keep alignment simple and quick? Not guaranteeing no breakout but worth a try.
G

bjm said:
I take it you're doing this on the drill press? Fix a clean backer-board down so it doesn't move (glue, double sided tape) and clamp the ply onto it before drilling - the breakout should be reduced if it is in (pressure) contact with the backer. You'll have to come up with your own method of making this faster by making some sort of jig - is this a component you're making?
Click to expand...

This seems the best way. I usually have a sacrificial piece of MDF on the drill press, but for this (if it's important) I'd buy a cheap sheet of ply and attach it to the back of the birch ply. If you're using a hand drill then it's easier, as you can just sit on it!

If you have hundreds to do, it may be more beneficial to find someone with a CNC to do this for you. It will be more accurate and you wont be bored witless nor end up apoplectic by making a booboo
U

Hmm; how thick does backing board have to be? I wonder if glueing some thick paper to it would be enough.
C

Use an auger type bit with a screw thread and set your pillar drill depth stop up so that just the point starts to go through the bottom, then turn the ply over redrill, and bobs your uncle. Ian
N

Brad point bit. Drill 90% of the way though for all holes. Flip and use the tiny hole that results from the brad just going all the way through to finish the hole. I do this with fostner bits when i dont want tear out.

It depends upon size of the piece and how precise the nature of the holes you wish to drill. Presumably the rear must be in view otherwise you wouldn't be so concerned?
I have an early background in Church Organ Building so it was a very precise and exacting woodworking trade and we often had literally hundreds of holes to drill and we'd have drilled a thin pilot hole first and then drilled through from both sides in order to get virtually perfect results.
We couldn't afford to have any breakout as it would have ruined the job and several day's work so workmanship was very often down to tolerances of 1/1000th of an inch or less so that was the method we would have employed I still use this method myself, particularly when I want precise holes but can't fit something on a drill press.

Drilling pilot holes and then from both sides is probably the best way to prevent breakout on the rear of the piece but may not be practical for you in which case you will need some kind of back material clamped to the piece to drill into so that it prevents most of the break out at the rear.
W

Wow, thanks for a lot of great replies people.
A few more details:
The pieces are up to half of a full 8x4 sheet so the pillar drill / press is out.
I was actually considering the router option this afternoon. Wondering if an upcut spiral bit would be the answer.
I'll look into star-m, that sounds interesting, but while the exit needs to be cleanish the drilled face is the front - one of those occasions when the back will be seen by the client on receipt, and then never again. It doesn't have to be perfect but the fisch bit splinters a bit more than I'd like.

Wisewood said:
.. Wondering if an upcut spiral bit would be the answer...
Click to expand...

You might get the splintering on the face then!!

Let us know how you get on with the Star M ??

My choice would be a router, make a jig if there are hundreds, a cnc is only a router bit so there’s no reason you shouldn’t get clean crisp holes

You haven't said how thick your half 8x4 sheet is, but clearly a pillar drill is out because of job size. If there must be NO breakout either side, then personally I'd go for a SMALL pilot drill all through, then follow up by going through each hole half way, turning the sheet over then repeating. Pretty much like novocaine has already suggested above.

Clearly with no pillar drill there's no depth stop, and the usual trick of using sticky tape around the drill to set the depth is unlikely to last for lots of holes unless you're very careful.

You also have not said what dia holes you need (or did I miss it?) but if using a twist drill (brad point preferred, obviously) then I'd suggest either a small dia hose clamp (Jubilee Clip) around the drill as a depth stop, OR you can buy screw-on depth stops in several dias (usually included within dowel joint kits - quite cheap).

Yes, drilling from both sides, plus a small dia pilot first, is more than doubling what will be a rather boring (sorry!) job, especially if there's lots of holes, but for myself, the above is the only way I know that will almost 100% guarantee that there'll be no breakout on either side.

If using a forstner bit (larger dia holes than brad point drill availability - 12 - 14 mm?) then I'm not sure how to fix up an accurate depth stop in your circumstances except by use of sticky tape around the outer body of the forstner - which you'd probably need to renew quite frequently - don't forget that with a half 8x4 sheet, it's going to be very difficult to eyeball the reverse side while drilling in this situation.

Router? Dunno, haven't tried, but one POSSIBLE problem I see (remembering the size of the router body and holder) is accurately placing each hole. But as said, never tried myself.

Get someone with a CNC router to do the job? Again dunno, no experience, but again with a half 8x4 sheet it sounds like a professional not hobby machine at that size, so likely to be rather expensive??

If I was going down the pilot hole route I'd take a bog standard HSS 13mm jobbers bit and grind a stepped bit (think pocket screw jig bit). you can have a d 5mm first stage to drill the pilot hole and the 13mm second stage to drill to any depth (except all the way through). then I'd do the drill and flip thing. saves doing 3 steps. 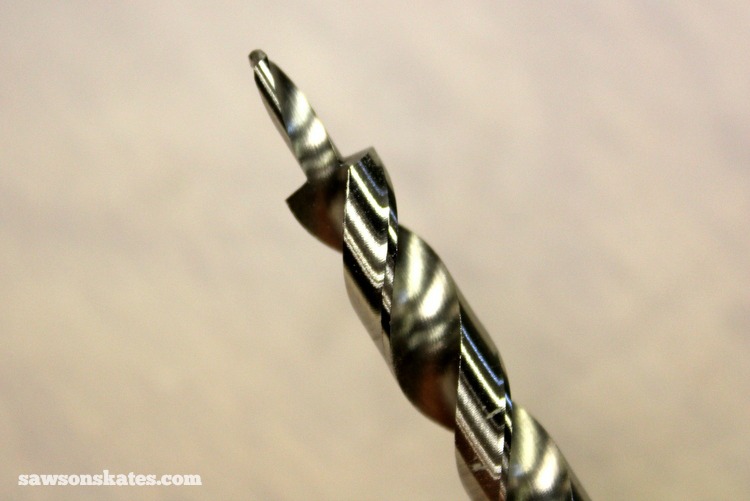 Probably not practical... but is it possible to drill through several sheets together, so each one is a backer for the one above? (And one backer sheet at the bottom of the stack.) You'd probably need to apply local clamping pressure, which could perhaps just be a lump of something heavy, moved around to be adjacent to the holes you are drilling at the time.

A nice thought, doing them in a stack, but if the sheet is large enough to prohibit using a pillar drill, watch out for the degradation in accuracy down the stack if the drill isn't perfectly square to the work.

I have been unbelievably impressed with star M f type drill bits! there's never any tearout on the outcut, seriously I don't think there is anything better on the market for any money, worth a try! cheers.
Last edited: 1 Oct 2020
W

Well I'm certainly not short of ideas now!
I think my first option to experiment with will be the router with a normal straight cutter.
Possibly combined with stacking the boards, and a jig to accurately position things that includes a sacrificial board under.
I can be the 'lump of something heavy' myself, I'd be good at that!
To be honest I think that will do it but I see some Star-M bits in my future for other reasons...
Very grateful to all for the helpful and friendly responses!
You must log in or register to reply here.
Share:
Facebook Twitter Reddit Pinterest Tumblr WhatsApp Email Link