I want to drill a dead straight 10mm concentric hole in a spindle about 100mm deep without it wandering off e.g. by not following the grain and not staying true. The spindle is the hub for a wheel so needs to limit any later wobble e.g. it shouldn’t prove the hole hasn’t stayed true.

Instinct says best result will be by using the lathe, checking the headstock and tailstock alignment, drilling a pilot hole with metal centre drill bit or using a gouge to create a dimple. Then a 10mm metal twist drill bit at a fast speed using a steadied Jacobs chuck in the tailstock.

Or would the pillar drill chuck in the tailstock (or taking the workpiece to the pillar drill) be better options? A wood (brad point) drill bit cuts a clean hole but the wings can divert the path along the grain?

I can roll drill bits on a metal table to check they are not still straight and not bent. I could check the runout on the Jacobs chuck as well.

The method for maximum bore accuracy is to drill the hole in the spindle blank before you turn it to size.

Drill the hole (in the lathe or pillar drill)
Mount the blank between centres using the drilled bore for alignment.
Turn to finished dimensions.

If the piece can be turned around then try to drill from both sides if that is possible. What is the wheel for out of interest?
Do you have any photos of the part to be drilled
S

CHJ":8lp5bpkv said:
The method for maximum bore accuracy is to drill the hole in the spindle blank before you turn it to size.
Click to expand...

Thanks - I will drill it on the pillar drill first. Then put it between centres ("dead" in the spindle, "live" in the tailstock) so that I can turn the basic shape and a tenon at each end.

There are drive centres designed specifically for that sort of task (lamp columns etc.) from the likes of Record but you can easily turn the equivalent spigot up on a chuck mounted piece of scrap, hot melt glue is an aid to improving drive if tailstock pressure is not enough. 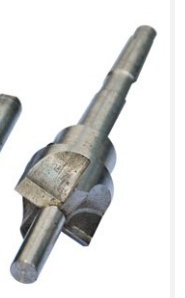 Dalboy":2jd8pldx said:
What is the wheel for out of interest?
Click to expand...

The wheel is for a spinning wheel.
M

yes drill the hole first on anything, then mount between centres on the lathe and turn the outside.

A Stebcentre is very handy, as it both centres and grips the wood. But you can grip it any way you like. Don't hesitate to leave the spindle a little longer than you need and use a sacrificial meths of holding the wood at the driven end; part off and clean up at the end of the job.
S

CHJ":161c87e7 said:
There are drive centres designed specifically for that sort of task (lamp columns etc.) from the likes of Record but you can easily turn the equivalent spigot up on a chuck mounted piece of scrap, hot melt glue is an aid to improving drive if tailstock pressure is not enough.
Click to expand...

An interesting drive centre (which I don't have). I can use your scrap and hot melt glue idea - thanks.

Do you think it matters that the hub has face grain across it (like a bowl)? I could switch to a true "spindle" for the hub so that the spoke "tenons" are into side "mortices" in the hub (across the grain).

Spindle orientation would be better technically as any movement due to environment stands more chance of being consistent, difference in Side grain and Engrain expansion or contraction across the diameter could 'in theory' lead to an oval spindle, whether a significant risk in your application is debatable.

For the centre boss, now that I know what you are turning I would go with CHJ,s method of drilling first and mount between centres.

I produced a hub using a "spindle" made from 3 glued pieces of cherry. The total length was 12cm and there is an 8mm hole drilled through on the drill press. The sides were cut round on the bandsaw and then mounted between two revolving centres (all I have). I stopped the rotation of the live centre in the headstock using masking tape. I "trued up" the hub and cut a tenon on each end and used mega jaws to hold the workpiece with the all important centred hole for the rest of the hub production.

One issue was getting a long enough drill bit so the diameter of the hole was increased to 8mm because that drill bit is long enough to be held securely in the drill press and pass completely through the workpiece and my 6mm drill was too short for the task. The hole didn't wander off and the same centre point was used for the hub circumference and for the hub hole. When mounted between centres there was very little cleanup to true it up - so the hole was already straight through.

When cutting the corners off I cut two quarters and one half section and the latter was used to make a jig to support the turned workpiece when drilling vertical spoke holes - so very little waste. 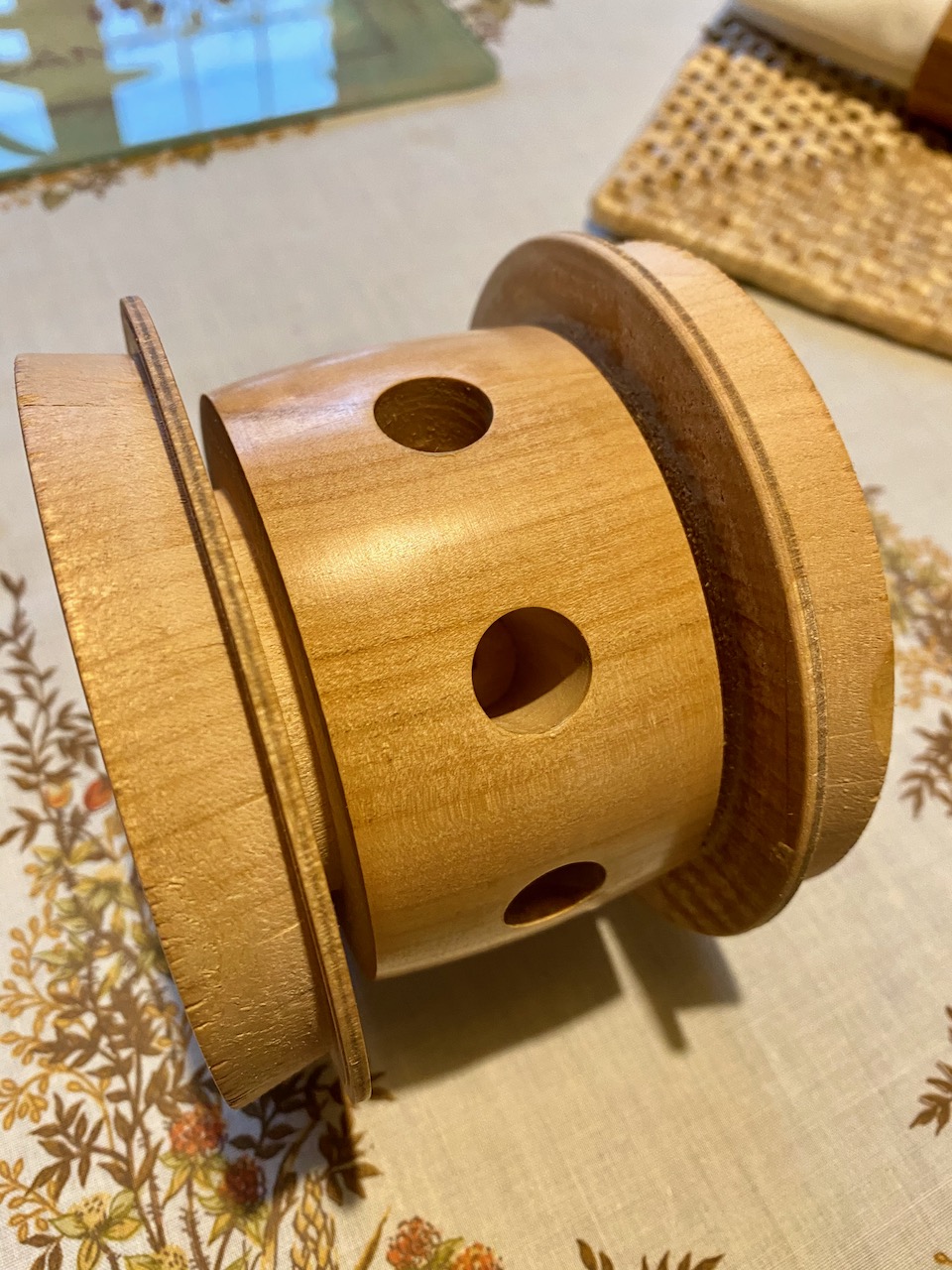 I was going to use the hot glue technique to stop the workpiece rotating at the headstock centre but this wasn't required. I have just bought an Axminster Evolution Series Pro Drive which I will use in the headstock for making the spokes - today's task. If I was going repeat the between centres turning then I would make a plug/cone and use this (new) centre because it's fixed. Stopping the rotation with masking tape and making light cuts was more than sufficient.

If concentricity is the main driving factor and as it is in wood, rather than metal, I would drill an initial hole 8mm dia with a forstner bit on either the lathe or on the mortiser and then work up to size using a boring bar in the lathe or mortiser. If it's a wheel that i actually going to be used, then I would recommend using phosphor bronze or lignum vitae as the bearing material. That way it will outlast your grandchildren
S

I did what Chas suggested and drilled the hole first and turned the spindle between centres.

The hub has an 8mm spindle that is driven by the wheel e.g. power out.