Hi folks
Just thought I'd post some videos I made, as I've tried dressing tires in the past but there was always some niggles that needed to be sorted out...
Took me a while, say at least a dozen attempts, and twice as many videos to develop a technique which was a sure way of doing things.
My last efforts has made all my other video attempts redundant , so I won't bore ye with those.
I think this comes across fairly clear, some of the details as to the why or why not's, are in the description of the first video linked, but it's super tedious and not really worth the watch...even for a bandsaw fanatic like myself.
Might help if you're trying to sleep, but I'm sure my "good" videos will do that anyways.

I know it's nothing special, but all the same I'm delighted to get the job done and to help other folks who might be in the same boat as I was.
Not saying I'm finished yet, as I might address the edges of the wheels to give a constant edge, but I don't think I'm too far from the finish line.

Eager to see what you folks with flat tires/tyres, who run wide blades off the wheels have to say about crisp edges.
There isn't many folks who actually talk about tires and dressing, as many just buy new ones.
I even bought a rubber tire myself, but it has a track which would need be dressed off anyway, so it's not only valid for the
frugal.

And a snippet of the machine running beforehand, if its of any interest.
Dressing bandsaw tires part 1 - YouTube

I tried to merge these videos without success as the files were too large.
Sorry I ain't no youtuber, just trying to add a raindrop into the pool of knowledge.

My tires are a bit shook, and there area few lumps missing, but thinking I might just get away with mounting the cutter at 60 degrees or thereabouts, as the flat might get quite narrow if set at 45, should I need to get that far into the wheel.
Eager to see what you folks have to say about crisp edges and anything else on the subject.

Thanks for reading, I might try and take a few photos of the setup shortly, rather than screenshots,
incase some of you have slow internet connections.
Likely it might help my query, to give a clearer idea of the edges of my wheels, and to see what ye say,
i.e...

And other factors which would be interesting to know, be it repair or whatever else. 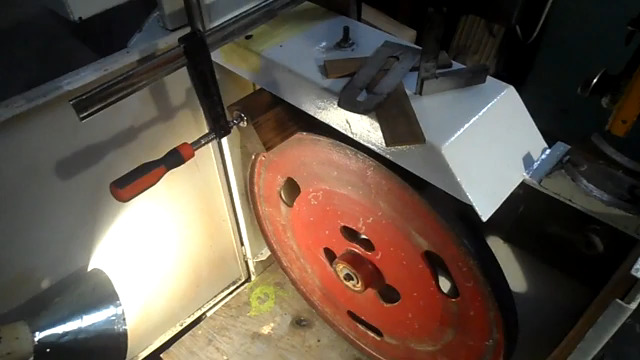 Cheers for reading, eager to put my machine back together, but holding out until I hear you folks thoughts.
All the best
Tom

Hello again all, had a mess about with the saw earlier today, and just for the sake of it,
I tracked the blade a lot further off the edge, as you would with a large flat tired machine..
The machine wasn't happy.

I have a query which I didn't check out, but positioned the machine in its spot again
and leveled it up again for some experiments.
There's three plumb lines on the machine now, awaiting to get swapped for some new woven string I just bought.

My guess is that the blade will always either track, or try to track at the widest point of the wheels, much like a blade that will always climb up to the apex of a camber.
There's a variable bevel profile on my wheels now, so the blade is either not happy running on even one wheel with the width of the flat being different, or it is fighting the other wheel as widest point isn't in line with the other.
Likely too much error yet to get into a position where I could experiment with wheel protrusion, but might be worth noting for later.


Also bought a bottle of the original gorilla glue.
I'm guessing it's likely very similar stuff to the PL construction adhesive Jack Forsberg used for his Speedax bandsaw, on a thread called ...
A repair to vulcanized bandsaw tires.

At the time at least, he reckoned it was about the same hardness as the rubber. 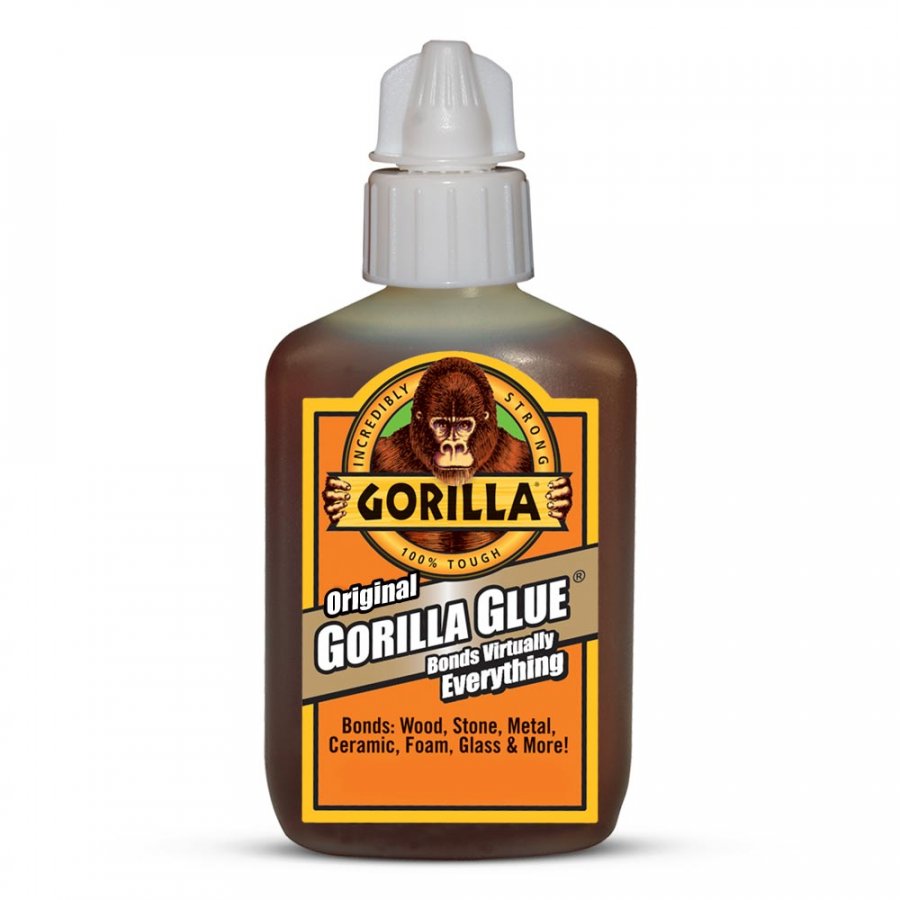 Be interesting to see if I can build material on the edges of the tires.
Wondering if I can get a few answers from Jack, but seems he's busy building a workshop,
from what I see on instagram, I don't partake on that site, and haven't tried bumping his thread yet, so hopefully he might respond to my own thread on the Canadian forum or the one south of it.

Not expecting to regain the whole width of the tire, but if it works great.
If it doesn't for some reason, then the plumb bob gets used.

Like to know a few tips about this stuff, as in how hard to press it in, how much time you've got
similar to quick set epoxy...ie one chance or blobbing it on before it gets stiff, or applying it thinly
wetting/dampening it? tempature ect , as it seems I need to get a small bit fimiliar with the stuff beforehand.

Been meaning to take a few snaps for ye to show what the wheel looks like.
Hopefully get at this tomorrow.

Hey tom,
I havent used the gorilla much but its a foaming glue like woodweld. Im pretty sure they recommend wetting one surface slightly to inrease adhesion. In terms of open time, i dont know. The woodweld i use comes in a couple of flavours, 5 minutes and 30 minutes, which is the time youve got to work with. A thicker blob of woodweld will remain uncured in the centre for a while ( much like expanding foam ) and it works best when used thinly between two surfaces being glued.
I wonder if you can melt in new rubber successfully?

Or the other thing to consider is time vs cost of a pair of new tyres....

Thanks @baldkev Kev
Not sure how long it will take me, but attempting to do this in multiple stages.
Jack said he waited 2 days before he filled the pores.

Not sure about melting in new rubber, sounds like a mission to get new rubber not mentioning the setup likely something I don't have.
I did buy a new tire, the only rubber one I could find was a Centauro one, half the thickness
and with a track in the center which would need to be removed, along with flipping it over again
and dressing off the undulations after.

If this fails with the glue, I can stretch the new one over it, hopefully.

Failing that, there's rubber and gasket material, which is cheap and as thick as you like.
Link for that in this post.

anyone had success with homeade bandsaw tyres?

We used it in work to make gaskets for access doors/hatches into very large oil/water emulsion tank. It is a fibre reinforced rubber. I cannot remember what adhesive I used other than it was a contact type See link to an e bay add. No idea of that particular product quality but just an example...

Still have to do some experimentation with the edges, but thought my videos will make it easy for someone to do the same.
I guess most folks edges aren't near as inconstant as the wheels on my machine, due to my mucking about being a chancer, so for most my next step might not be necessary.

I tried reducing the amount of faffery, have a hidden video of that linked in the description of part 2
not worth watching, but might address some questioning should anyone be attempting to do this.

Back to the gorilla polyurethane glue...
Still unsure about this glue, and if masking tape would be a good barrier, might try insulation tape instead for the edges of the rims, should I not get much answers.
Thinking my shed should be damp enough for moisture not to be a real problem, will likely have to clean the wheels down after a good brush.
Seems better with some heat, but from watching other folks doing epoxy pours...
(Knowledge which I guess has been shoved down everyone's mouths)
the quicker the cure, heat I guess mainly at play here...
the more chance for bubbles .

That's only an assumption, I have no clue about this stuff,
Seems you can use coking oil to get it off your hands, and it's not for hair, but apart from that,
I can't find any gorilla glue for dummies kinda video, only promotional ones.

Seems I just need to get sthuck into it.