I turned this 3 or 4 months ago, put it in a box and changed the paper a few times at the start, took it out yesterday and it now looks like this: 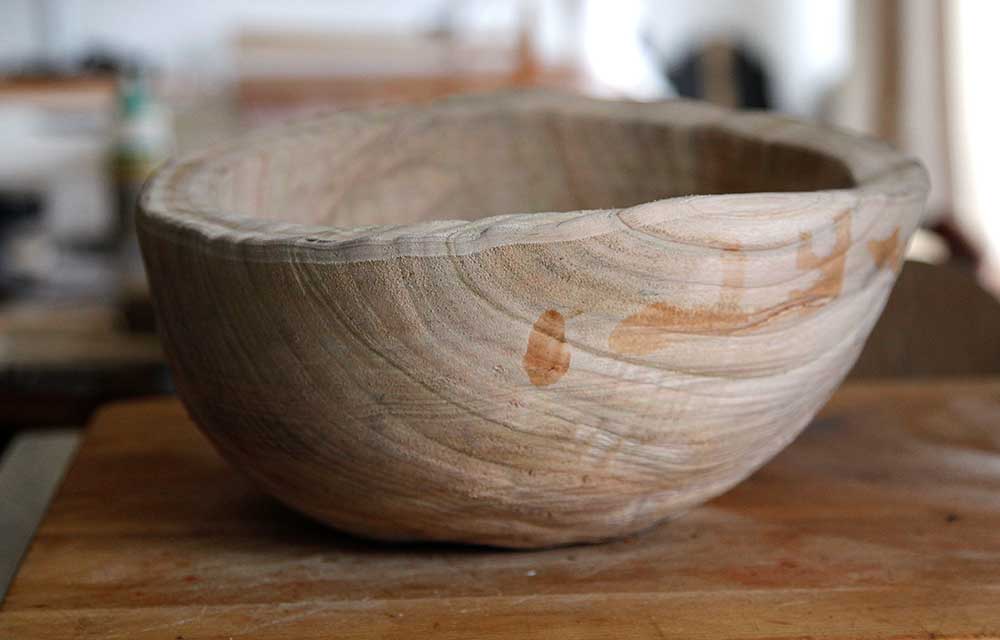 It was round when I turned it! The sides are about 1" thick and it's heavy (about 12" diameter). In theory I could turn it to round, I think (the rim should be ok, but some of the belly is way off), but I don't think it's worth trying. Instead, I wondered if I might try carving (tho it's very hard as I recall) or sanding it to a thinner version of itself, or flattening sides in places/ adding texture in the process, something like that? Or just sand it to a better finish and leave as is - a rather heavy bowl? It has some lovely rippling so could look nice.
Definitely a candidate for the firewood basket at the moment, but just wondered if anyone had any advice/ thoughts on how it might be developed as something different.
Thanks, C

If it were mine I would be happy with it. It's wood, wood moves.

In my opinion perfectly round looks less good. Sanded and with finish it will look great.
F

Thanks both - the issue I have with this one is the extent of the distortion and that it's pretty much amorphous rather than in one direction - I'm not sure that, in getting it round, I wouldn't go through the side somewhere. It really is a strange piece of wood now with ripples and twists in it, as well as asymmetrical distortion. The more I look at it, the more interesting (if ugly) it gets - so I think I'm with your first reply, Jerome! But it'd be good to get some of the weight off it.

I had a eucalyptus tree I chopped down. I planked a few small bits and tried to dry it, my oh my did it twist, split, shake etc. Even once dry and I tried to plane it flat it continued to move each time. Ended up in the fire. Afterwards I read about the species and my experience was what I should have expected.

to check that you have enough meat on the bowl to return Measure across the widest inside measurement then compare this to the narrowest part if this measurement runs to the outer edge of the narrowest then you have no chance of returning it, if when measured it leave enough wall thickness then it should be OK.
Hope that makes sense

Eucalyptus is renowned for distortion as it dries. If the bowl has moved too far to allow you too turn it back to round, your only option is to carve / finish it by hand.
C

Thanks all.
Paul - it's such an odd shape now that I can't be sure. The rim indicates that it could be turned to about 10mm but the belly leaves me wondering. I might have a bash at turning it to see what happens, can't think of any convincing carving or hand-shaping that might look good!

Fitzroy":2miq0ydu said:
I had a eucalyptus tree I chopped down. I planked a few small bits and tried to dry it, my oh my did it twist, split, shake etc. Even once dry and I tried to plane it flat it continued to move each time. Ended up in the fire. Afterwards I read about the species and my experience was what I should have expected.

Serendipitously yesterday I cut one of the dry eucalyptus trunks I've got in storage, it's certainly possible that now the trunk has been cut into boards it may potato chip, but since it's virtually free I've got nothing to lose and may have some small box parts. 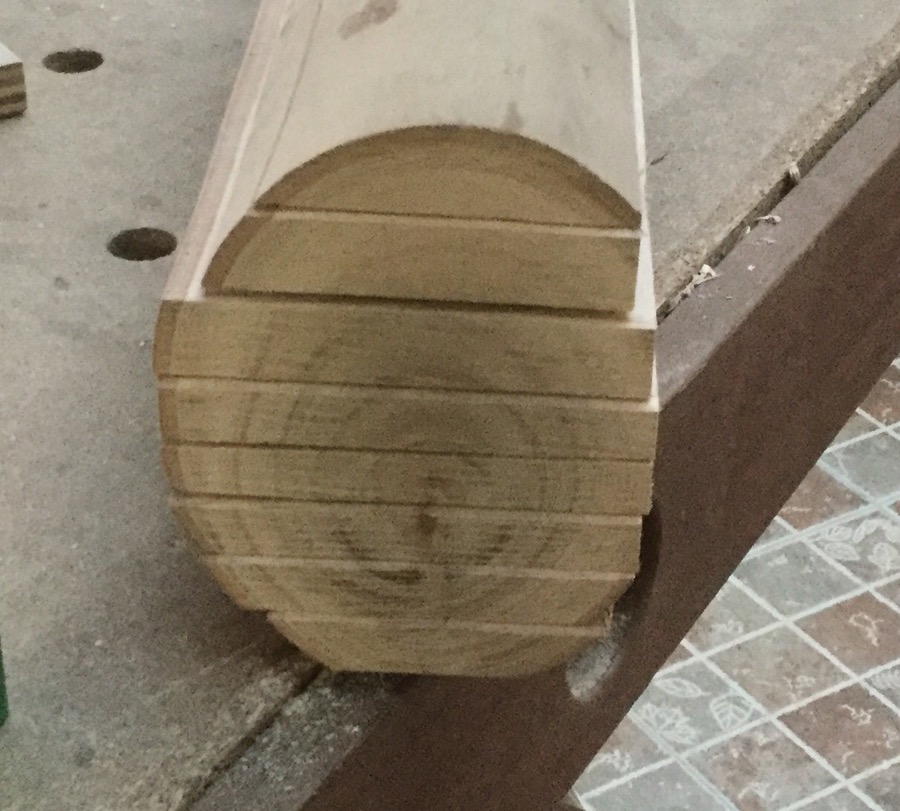 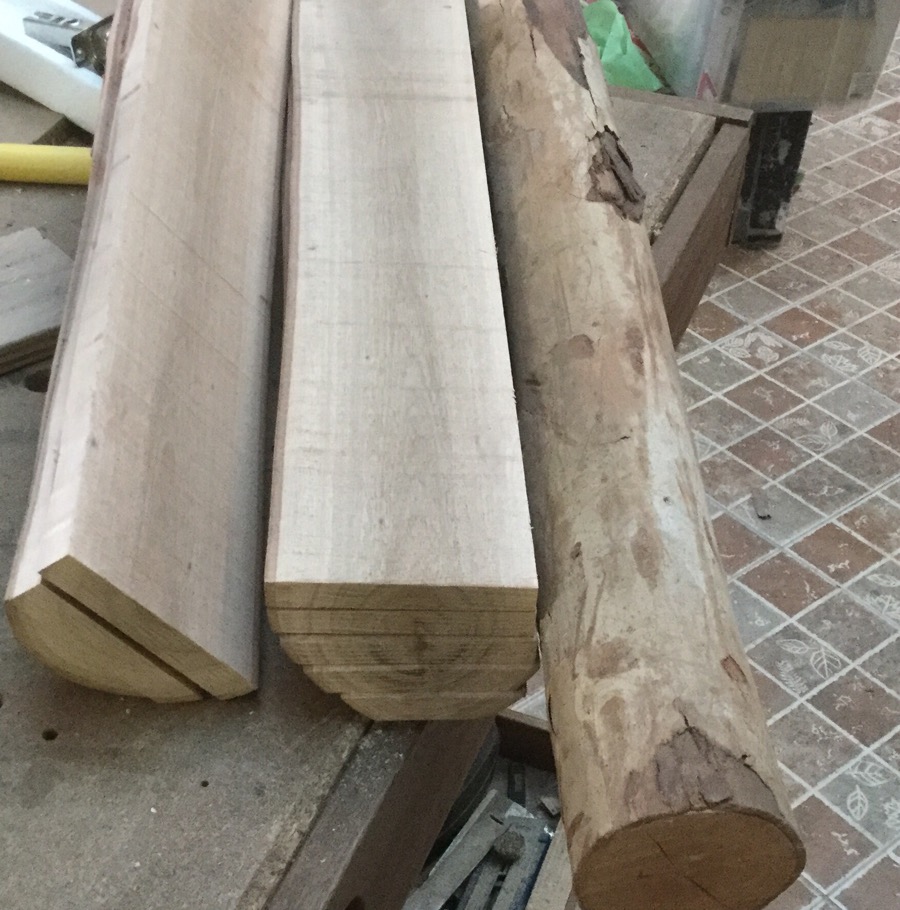 I've also made some rustic storage racks from newly cut trunks and seasoned rails and while not pretty they are certainly sturdy and have lasted 7 years plus. Currently SWMBO has appropriated them for her outside kitchen. 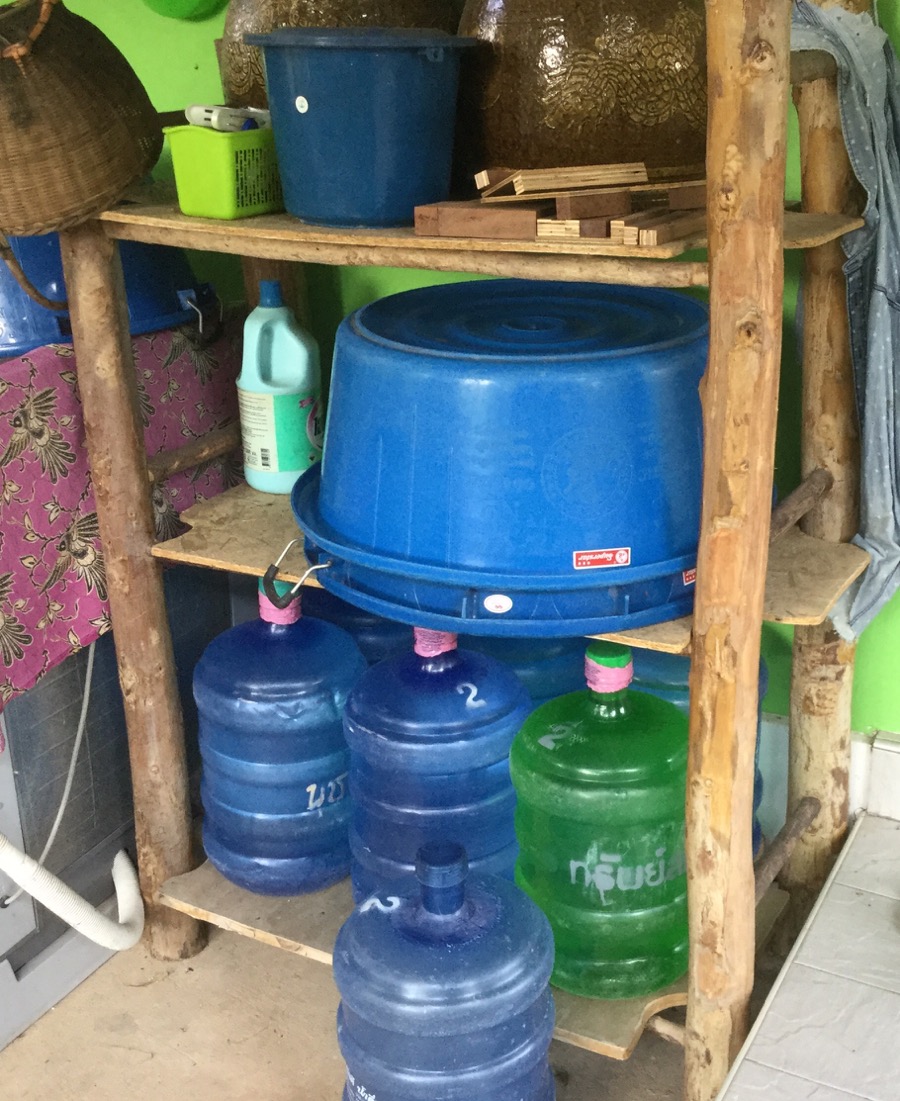 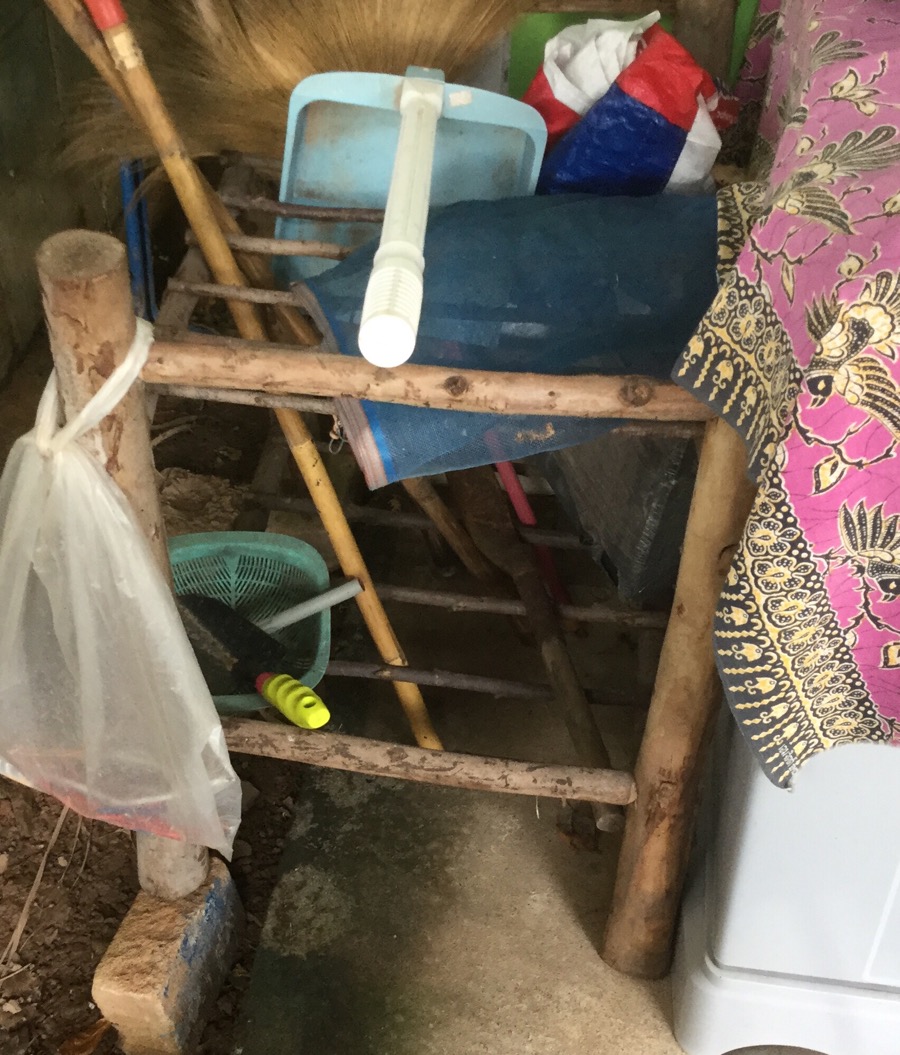 Though I will say that many of the logs have got splits and shakes in them. In that case you need to think of a different way to use them, certainly heating is one way if you still can.

This answers that little question... 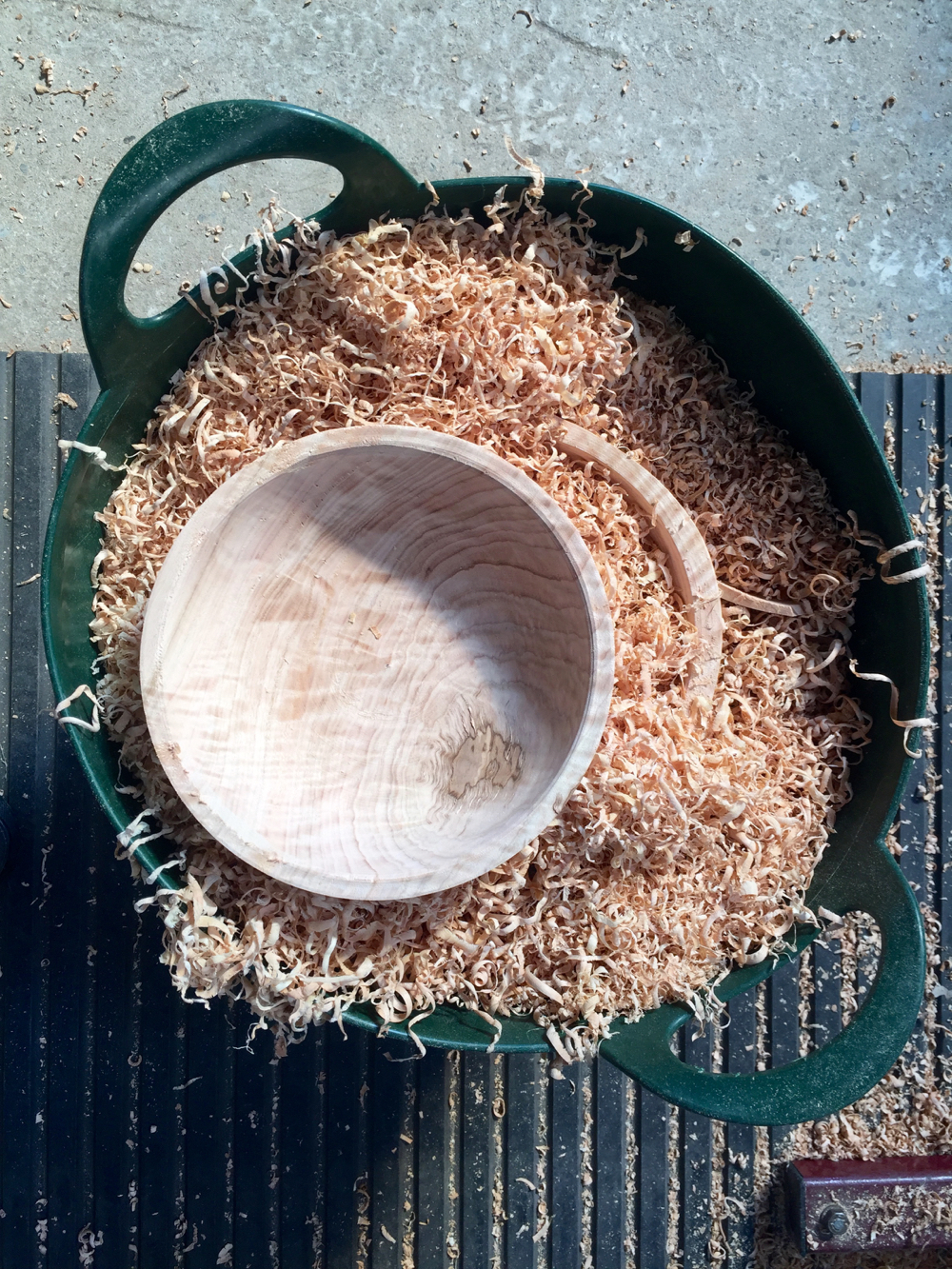 It was so wobbly I found it really hard to figure what was nearest to centre on the chuck/ friction drive, and think maybe that's where I messed up. After that, it was just a matter of reducing and reducing til there was next to nothing left, and finally turning the inside away to the point that the base was too thin. But all's not completely wasted, some of the fellas are going to use it as an ashtray.

Fiddling about today, I pulled the bark off one of the eucalyptus logs in the yard: 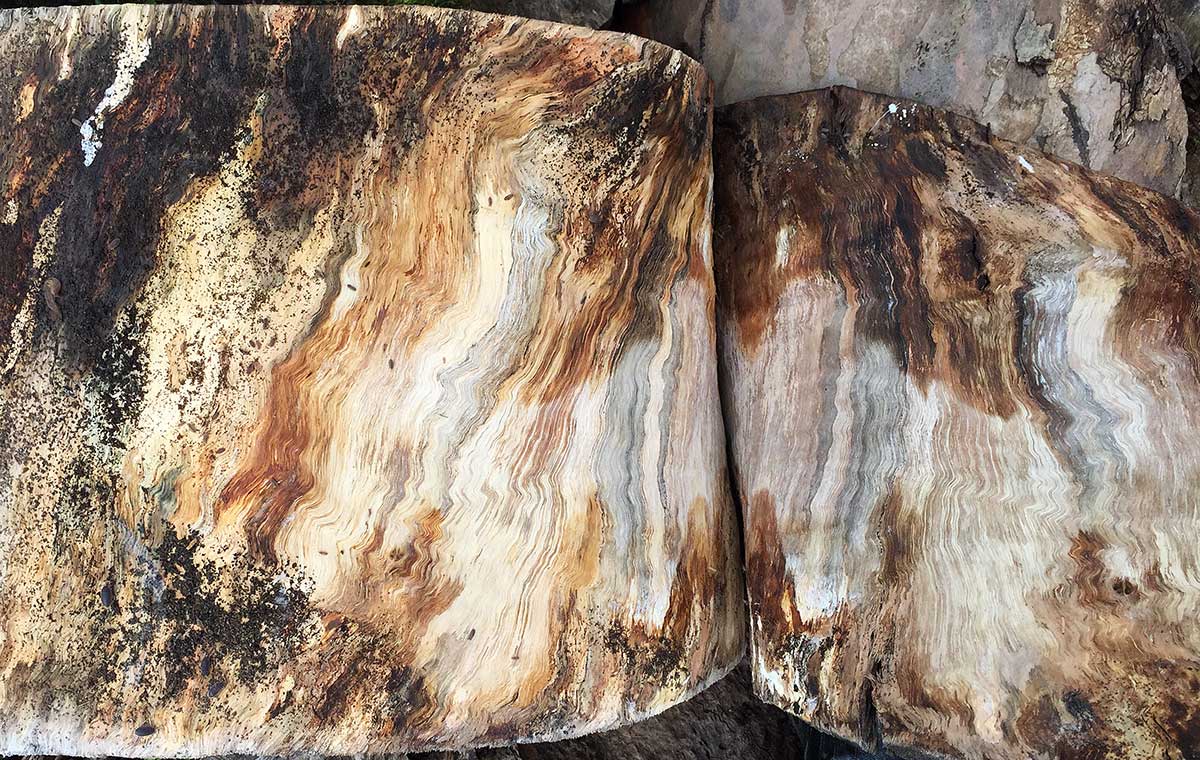 Stunning to look at, and I think it's not so hard to see why it can be so tricky as it dries!

Well done. Now you know why you keep the centre mark for as long as possible. Only remove it when the rest of the bowl has been finished with only the base left to do.
C

The centre of the base was relatively easy to find - it was the rest of the bowl that was way off and in no particular direction. I needed to find the average centre for the whole thing and failed.
You must log in or register to reply here.

T
Sticking door (after settling?) - how to fix?

Maple - suitable for outdoor use 365 days.