we're past the point of solving the question above- even so far as someone on a different continent running a card scraper sideways on an otherwise flat diamond hone.

But, I noticed that the diamond hone scraper seemed a little less smooth (albeit my results are better than most "guru teachers" get with anything). So, I went back and busted out a wide board that's to be bookmatched into a les paul top and ran the sawmarks off of it.

AFTER resetting the edge again with the file and washita (or rather the top and bottom edges). There's a quality to the edge that's better, it's smoother, the shaving volume is better and smoother, and then when you go to draw the burr back out and re-roll without filing, it does that better, too.

Not sure if there are cheap natural oilstones on the ground there, but some of the methods to sharpen scrapers show people working through a whole progression of diamond hones - I don't really get it unless they're selling diamond stones in their classes or they just want something students can buy. Plain steels (especially at lower temper) come out better with something else.

I guess that's progress, but doesn't look as nice as yours. How important is scraper thickness? Mine seems thick enough that bending it is a real pain. 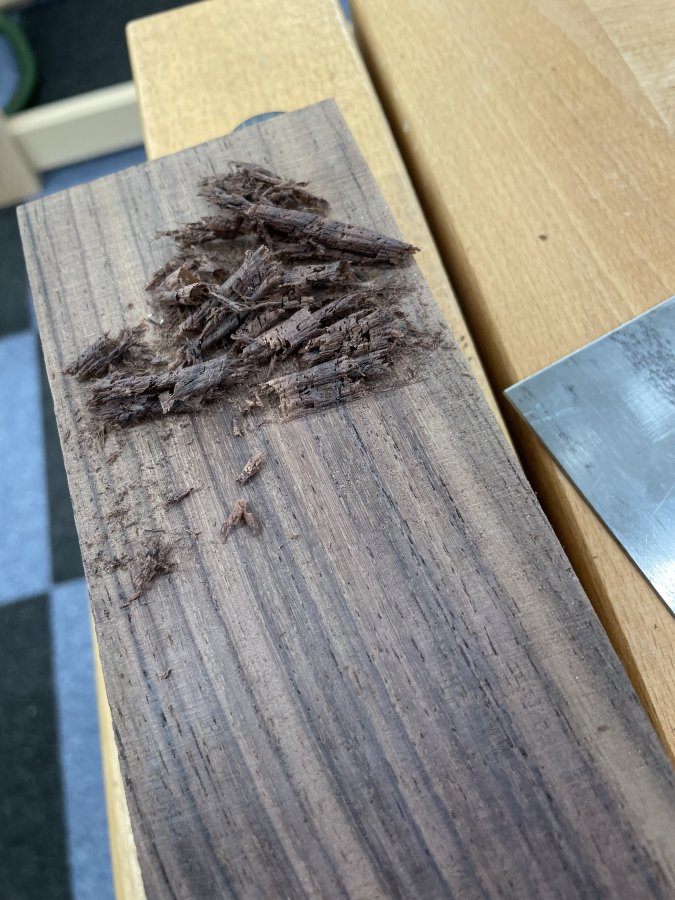 If you compare what you've got to what a lot of people have, you're on your way.

Scraper thickness generally should correlate with depth of shaving that you're taking. Thinner scrapers, smaller burr, finer work. Thicker, larger burr, heavier work. Not an absolute rule, but in general.

It's nice to have a thick and a thin scraper with little done by the latter other than fine clean up to cut time sanding if you choose to finish sand (I generally can profile a fingerboard after scraping with a radius gauge using 320 grit paper, which doesn't leave much to do for finishing).

The point of worrying about with getting a cleaner burr like I have is you'll do far less physical work to get the same amount of scraping done. If a pass is removing 4 times the wood volume, the math there is easy. The results are more predictable, too.

D_W said:
I wouldn't get too infatuated with something like that unless you have no other options. Three different people have sent me their end-all-be-all "best ever" burnisher, and a guy who teaches hand tools here (And who isn't as good with them as I am - which is boggling, too) swears by a triangular burnisher and sold me one early on.
Click to expand...

Did those folks send these to you since you acquired that microscope by chance?

Not intending to make a wide burnisher anytime soon, as I have a Crown one also, bought near 10 year ago, and it seems to me from your vid on the subject ,
that the buffer is much superior than anything else I've seen.
Not going to run out and buy another grinder or anything, as my methods work well enough for me to get by.

Not noticed the lower part being soft and getting scratched, but admittedly don't use a scraper often.

Used a drill bit a few times for the job, rolls a burr on some old hardpoint saw plate, as well as it does on my Bahco scrapers, not ever tried anything else.

What a variance of burnishers there is, with some like Pete making ones from something like 5mm drills (I think?)
Interesting that I've never seen a close to moderated discussion on the topic,
Does that say anything?
D

Actually, I fix things for people or in some cases, grade a natural stone for people and since I don't accept payment for anything, I get all kinds of rubbish (Some of it turns out to be really interesting - I appreciate any kind of gesture like that - the kindness of the gesture is more important than what it is). But, I guess in that case (if it's grading a stone), that's done with the metallurgical scope - so the thing turns out to be more valuable than I thought.

As far as the buffer and deburring wheel - it's very practical, but what I did here is more precise and doesn't require the buffer. I don't have a great preference, I guess (card scrapers due chew up buffing wheels).

I was thinking drills earlier. Some screwdrivers have really hard shafts, but I don't know which. And some drills are really high hardness and would just need to be polished with a deburring wheel and a buff.

There seems to be a million burnishers now (when I started this hobby, I recall three or four and only the hock rod is really as hard as it should be, and I could make harder but ain't broke at this point) - in terms of really talking about what's going on and to get the shavings like I have above that are full length (and really speed up scraping vs. a bunch of junky split interrupted shavings) - I guess as you say, no discussion has been moderated.

In my opinion, the right radius, the right hardness and the right polish before burnishing. Most people struggle with scrapers and seem to be relieved if they get any results, but they are a dandy shaping tool (more than just finishing). I always scrape something on guitars (often a lot of something) and always work the dimensions of a tool handle to near finished size and lines with a scraper, trying to minimize sanding.

Some wood seems to scrape as neatly as it planes or chisels and the fibers don't ever appear to separate or get fuzzy (stuff like boxwood, ceylon ebony, apple...)

Getting a third go at forming the hook is what I seem to have bother with, if you want to call that bother.
That's with light pressure and progressively turning it.

Only bought a vice not so long ago, so might try and get a bit more used to the tool.
Use the non important end of a beater plane iron with no burr most of the time, for heavier work.
Being careful if one has a short cap iron screw, as that edge can take a shaving from the cap iron DAMHIK
K 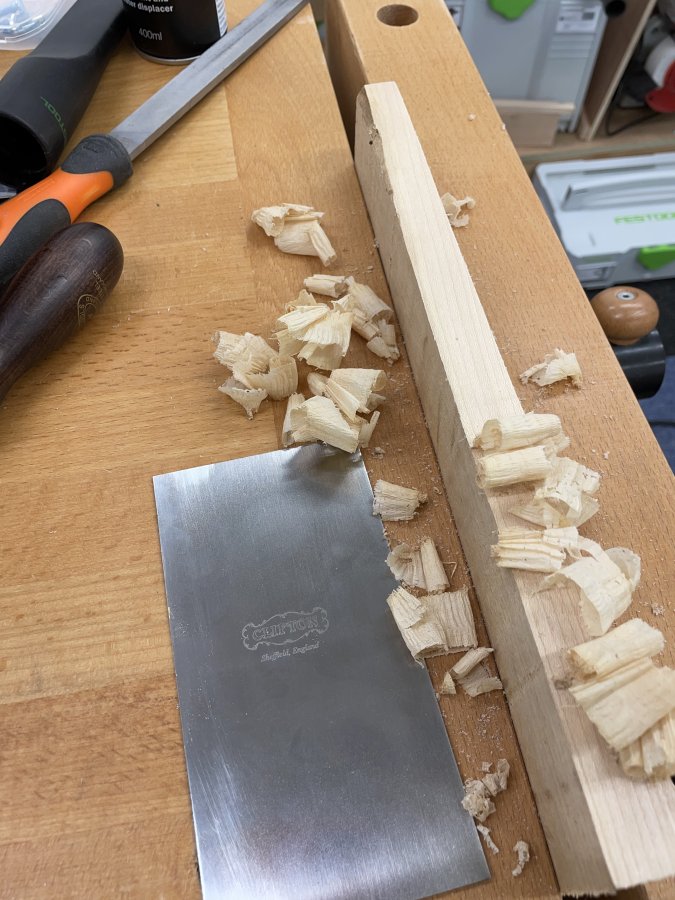 For whatever reason, a new card scraper fixed it. New one is a Clifton from woodworkersworkshop. Old one was a Bahco. Probably something I did to it...
D

The new one may be a little softer. Bacho boasted 15 years or so ago about how hard their card scrapers were (I'm sure there were cheapies of 1070 or 1060-ish steel around that were soft because there were saws made of soft spring, too), but if spring steel gets much above very low 50s, it starts to be a problem filing.

it's not like the corner of everything ever holds forever, so ramping up hardness on a card scraper beyond typical 1095 blued condition didn't really make any sense.
D

(the shavings look dandy - you could probably look closely at the edge of the bahco scraper and see if it's not crisp. If it's rounded over, or if you can run a fingernail along it and feel anything, then it's in need of some additional filing or belt sanding to get back to fresh undamaged metal...

....but even better is finding a scraper that you like that stays in good condition and is more pleasant to use).

How do I lubricate and clean Diamond Sharpening Stones?
2