Regarding the Record 051/0151/A151 shaves, can someone tell me roughly when (even, in what decade?) Record switched from the cap iron with "Record" and "No.xxx" cast in (as raised letters in a recessed background along the upper edges) to just engraving (stamping?) the information?

I just picked up a couple of 051s (flat and curved soles) off eBay with the former, cast-in lettering. Just wondering what era they're from. Thanks for your help!
J

Here are the before and after I'm referring to -- when was the style above replaced by the one below? 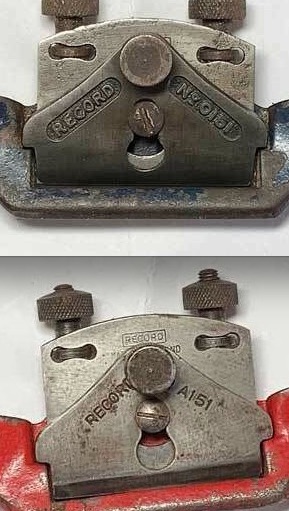 I don't see any reason to assume that they are a sequence. They are different models, so could always have been different.

You probably know this already, but the Record Hand Planes site gives production periods for most lines, not just the planes, based on their inclusion in catalogues.

From Andy's link, I would suggest that, in the case of the blue-black paint colour, that an age could be guessed at from the colour, generally the darker the blue the older.
Equally if there are remains of the Trade label this might give clues. (see the dating of bench planes section)

Thank you both for your responses! Between your several suggestions, I've pinned down the period for my two 051s, and I think I've at least narrowed down the answer to the more general question of when the cast type was replaced by the engraved type.

AndyT, I fear I muddied the waters by using photos of two different models -- I just grabbed two convenient photos for illustrative purposes. But it really was a difference over time, not one between different models of shave. On eBay right now you can see examples of the A151s with both types of cap (though many more of the engraved type), and a few cast and one engraved type cap on A51s. But the handiest evidence that (at least in the old days) Record used the same style cap across ALL the relevant shaves is in the two spokeshave pages from the 1949 catalog, reproduced on the recordhandplanes.com site. They show all of the -51 and -52 shaves (051/2, A51/2, 0151/2, and A151/2) with the cast type caps. Similarly, if you have Record's "Planecraft" book, the chapter 18 illustrations show all the -51 types with the cast caps.

But your suggestion that it was a difference between types rather than over time did make me realize that I have yet to see examples of the 051 or 0151 with the engraved type cap -- only the cast type. I think the explanation for this, and for the fact that there's only one engraved type A51 on eBay, may lie in the dates of production, and may also help indicate when the change was made from one style to the other. The A51, 051, and 0151 were all discontinued in 1967, according to the information at recordhandplanes.com. This suggests to me that the engraved caps were introduced sometime not too long before that. Some A51s were sold with the new style cap. Since the A151s were the only Record shave produced into the 21st century, there are many examples available of that model with the new cap (eBay is awash with them). As for the 051s and 0151s -- there may be a few around with the new caps, or perhaps there were sufficient old style cast caps to last until Record stopped selling these models in 1967. Maybe one of them with the engraved cap will show up on eBay tomorrow -- or maybe never.

I think the above accounts for the facts. Sorry to be so long-winded about it! Please feel free to let me know if you see any holes in my reasoning.

As for dating my two 051s, I knew they weren't too recent (the blue paint is nice and dark). But Bod's suggestion about the labels cleared things up for sure. One of the shaves has only fragments of the label, while the other is complete. But both are the "type 1", which recordhandplanes.com dates as from 1930 - 1955/6. Below is the label on the 051R. The one on the flat soled shave isn't so nice, but there's just enough to see the "CORD" from RECORD and the "mark" from "Trade mark".

Thank you both again! and have a good week. 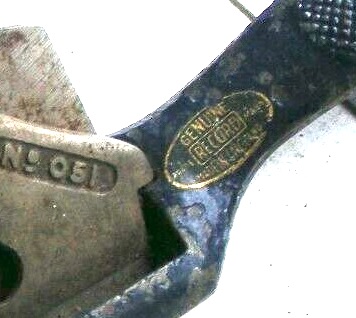 Ok, here's a contribution which will give you a reference point.
It's my Record A151, which was bought in 1988.

It has smooth, light blue paint - there's no checkering on the handles. It was definitely made in England - that's in the casting, next to the model number.

And its lever cap has the later style. Now I think about it a bit more, this change does look like a bit of the sort of cost-minimising thinking likely to have come in in the 70s or 80s. When the model number was in the casting, Record would have needed to hold stock of functionally identical parts with different numbers on. Swapping to one standard cap and marking as needed would have made a tiny reduction in stock holding cost. I think the numbers were stamped, not engraved, judging by the way the metal is bumped up around the lettering.

One other point - there wasn't really any production of Record hand tools in the 21st century.

The last few years of the company can be summarised like this (info mostly from Tweedale's Directory of Sheffield Tool Manufacturers 1740-2018.)

Internal reorganisation - Record Ridgway Ltd was the operating company. Bought Platt Forgings at Willenhall and built a new foundry at Parkway in Sheffield.

Profits were in decline. Platts was sold off. In 1981 Swedish firm AB Bahco took over Record Ridgway. In 1985 a management buyout restored British ownership. Hand tools were branded Record Marples in this period.

In 1998 the company was bought out by American Tool Companies Inc and became Record Tools Ltd. In 2003 the American owners became Irwin Industrial Tool Co, who continued to sell tools branded with the Record and Marples names (sometimes alongside the Irwin brand) but by this time UK manufacturing had ceased. The Record site at Parkway is derelict. (https://www.derelictplaces.co.uk/main/i ... 013-a.html)

The US firm Irwin was briefly owned by the Rubbermaid group, who moved US production to China. In 2016 Stanley Black and Decker bought the business. (https://en.wikipedia.org/wiki/Irwin_Industrial_Tools)

So since 1998, unless they were old stock, tools marked with any of the old, trusted UK and US brands of Record, Marples, Ridgway or Irwin could have been made to any design, in any country. Not at all the same as when the Hamptons were in control and built up the Record brand.
J

Yes, Andy, the idea of cost-saving was one of the things that led me to think that what I've been calling the engraved style was later than the cast style, even before I ran across the evidence in the catalog and in "Planecraft" that the cast style was earlier. (Looking at your photo, I agree, it looks stamped rather than engraved.) I was thinking of production costs rather than inventory, assuming that it would be more costly to make the cast type, but what I don't know about metallurgy is essentially everything, so that might be totally wrong.

I had realised that Record had gone through corporate changes and finally disappeared as an independent entity, and that production at some point had moved to the Far East (although your concise summary is very helpful to have). I just didn't want to further complicate the discussion. The Irwin shaves continued on with the stamped type caps, as far as I can tell from online photos, so the corporate change seemed a little aside from the cast/stamped transition.