Not for feeding the grid but for charging up the battery for the electric fence.

The fence has a small energiser...80mA.. and so a normal small UPS battery (12v 7Ah) should keep it going for a couple of days. Trouble is, of course, you then need to replace it with a second fully-charged one.

So a quick look on eBay yielded one of these..

20W ...Ohm's Law tells me it should be good for well over an Amp so no problem keeping the battery charged. Yeah, right. Anyone seeing my other thread on this panel (and all others like it of similar wattage on eBay) will know that it comes from the C³ company and as such, totally useless.

So I bit the bullet and bought a nice large 100W panel of good provenance. Just connect to the battery and away we go. In theory. Thing is batteries are dumb. Solar panels are dumb. And whilst the panel would charge the battery (or even over-charge it on a very bright sunny day...we do have 'em occasionally up here) there is a better way to connect the two and is explained in more detail for those technically inclined here It's called MPPT Maximum Power Point Tracking and optimises (adjusts) the voltage from the solar panel to charge the battery in the quickest possible time.

And you can buy these controllers for as little as £6 ! 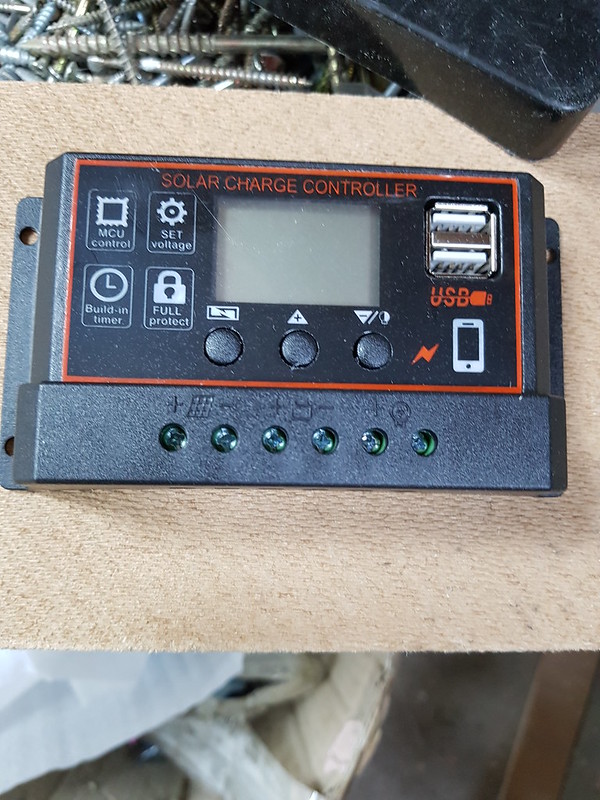 And it's a little gem and does exactly what it says on the tin. The display shows whether or not the battery is charging and it stops charging the battery when charged.

So what happened in practice ? When I first installed it, the light up here in the twilight zone was never enough (even with that large panel) to fully charge the battery and keep it going over-night. But when the light levels did increase then I found that the battery would charge up very quickly and so there were many hours of charging time left in the day and going to waste.

But, of course, god days followed by twilight dim days and we'd be back to battery going flat.

The answer was simple. Buy another UPS battery and stick it in parallel with the original one. So now I have the best of both worlds - enough oomph to charge them both up and enough in reserve in the batteries when the sun don't shine.

My thanks, as ever, to 9 fingers for his help and advice.
D

Thanks for that. I have a project bubbling along in the background that I really need to complete. I have a solar panel and a small peltier dehumidifier. Plan is to run the dehumidifier off the solar panel, with the peltier in an enclosed space (clear glass or plastic) A solar powered dried for excess garden produce......

I was never confident of connecting the solar panel to the peltier - but with one of those controllers and a 12v battery as ballast I reckon I will be good to go.