Cutting a groove at an angle with hand tools.

Here's a problem that may require thinking caps to be put on (or maybe not for the experts amongst us).

I'm working on a tea tray at the moment and thought it would look nice if the two end "walls" (for want of a better word) were angled to lean outwards. Given that I want the bottom to sit loose in a groove in all the sides/walls, this would necessitate the groove in the ends to be cut not perpendicular to the surfaces of the end walls.

I did a bit of experimenting yesterday: held a piece of wood at what looked like a pleasing angle, marked horizontal near the base and pared away to the required angle. That was quite simple to do and I had a nice leaning bit of wood (I wonder if this is how they made the initial model of the Leaning Tower of Pisa :mrgreen: ). Then I cut a roughly (it was only a feasibility experiment with pieces of scrap) angled fence for the plough plane and hat a go at the groove on a normal, square piece of wood. This was impractical cum disastrous because with such an arrangement one corner of the plough blade inevitably digs in first and I found it difficult to control. Maybe it would work by going slowly at it but would one get consistent results?

I came to the conclusion that the only way to do this would be to cut a batten with an angled side, clamp that across the piece of wood and saw the groove in. That way consistent angles at both ends would be achieved. Then it should be just a matter of showing the ends to the unangled, long side walls and cutting grooves in conventionally on them. At this point I got brain ache because I couldn't work out the angle for the batten and decided to sleep on it. (In fact it is a hell of a job calculating the angles. I measured my pared piece as leaning at an angle of 32°.)

I should imagine that the experienced pro would:

a. Already know what all the angles should be.

b. Just cut the angled groove with a tilted table saw blade.

But what is the best method for doing this by hand?

Meanwhile, because I want to get this tray done fairly soon, this one is going to have simple vertical walls but I think I'd like to be able to have tilted end walls on a future one.

One second's thought only, but it might be worthwhile experimenting with ploughing a normal groove, then adjusting with a chisel. As I see it, you would only need to adjust the upper side of the groove.

Use a fatter piece of wood. Cut a square groove, then plane all the other sides to angles you want relative to the groove. 8)
A

MikeG.":27dycg6t said:
One second's thought only, but it might be worthwhile experimenting with ploughing a normal groove, then adjusting with a chisel. As I see it, you would only need to adjust the upper side of the groove.
Click to expand...

Thanks, that hadn't occurred to me. I imagine that an angled batten and a wide chisel would be necessary in order to achieve as precise a cut as possible so as to limit sloppiness in the joint.

sunnybob":2t3i2pr5 said:
Use a fatter piece of wood. Cut a square groove, then plane all the other sides to angles you want relative to the groove. 8)
Click to expand...

I think the argument against that, (which is the way I would probably do it, I reckon), is that if there is shrinkage the slopes would become exposed and visible, and the joint noticeably more open.
A

sunnybob":nxn0ifl3 said:
Use a fatter piece of wood. Cut a square groove, then plane all the other sides to angles you want relative to the groove. 8)
Click to expand...

I imagine that would seriously increase the amount of highly accurate planing required although it sounds doable. Have you tried that?
T

Or if you didn't want to do the above it would be possible to make a simple one off wooden plough plane using a chisel as the cutter. Make sure that the lower part of the plane is only the thickness of the cutter used so as to allow it to run along an angled guide piece clamped to the work. Bit of a faf for one groove though.... I think I would chisel one side of the groove with a guide as you say.

The way I would do this is:

1. Prepare the tray end, square and true. Stand it up on the bench so the edge that will be the underside of the piece is indeed at the bottom.

2. Stand a piece of scrap up against it on the bench. This scrap will become your saw guide. Clamp the two pieces together and put them upside down in the vice.

3. Plane both the pieces together until the tray end sits at an angle that you are happy with when you sit it back on the bench the right way up. Keep the saw guide clamped to it as you do this. The saw guide will then end up being planed at the same angle as the tray end.

4. Move the saw guide to the other face(*) of the tray end and place it where one side of the groove will be.

This way the groove is cut at the correct angle even though you don't (need to) know what that angle is and never need to measure any angle.

* Edit: Depends which side of the tray end the saw guide was when you planed it. You may just need to move it up if it is already on the correct side.

Like Mike said, first cut a narrow groove with the plough, perpendicular.
But rather than use a chisel, add one more tool to your kit, a side rebate plane. (The Stanley 39 is probably the easiest one to find.) Use this to plane back to the required angle on each side of the groove.

On one side you will be planing away the top edge of the groove and you can see what you are doing.
On the other side you may need to take a few swipes off the piece which fits into the groove if you can't get the angle all the way to the bottom. It will depend on the size of the groove.
A

Thank you all very much for the replies.

There are some ideas there which I will try to give a go this weekend.

I started off with this idea thinking that there must be a standard technique but couldn't find anything in books or the internet. That would appear not to be the case.

sunnybob":3f53w7tg said:
Use a fatter piece of wood. Cut a square groove, then plane all the other sides to angles you want relative to the groove. 8)
Click to expand...

I imagine that would seriously increase the amount of highly accurate planing required although it sounds doable. Have you tried that?
Click to expand...

I would use the table saw and the router table :roll: :lol: :lol:
That would make my method simple and fast. 8)

I dont understand Mikes post about shrinkage. My method is just another way of achieving the same result as your way. :shock:

1. Plane a tapered fillet about the same length as your plough plane. Tack, screw or d/s tape this to the plough plane fence. Plough all the angled grooves. They will match as they all had the same angled fence. The grooves will be a little bit deeper than necessary on one side.

2. Blow the dust off your Stanley 55. Work out how to adjust the tilting fence and marvel at how you never needed to use it before.

Plough a narrow groove at right angles. Remove the bottom of the groove with a chisel to give a triangle section groove, then shape the base of the tray to fit the groove.

sunnybob":2db0xrvv said:
.......I dont understand Mikes post about shrinkage. My method is just another way of achieving the same result as your way. :shock:
Click to expand...

The suggested technique involves essentially a flattish chamfer on the top edge of the tray base-board. If the baseboard then shrank, the chamfer would be pulled a little out of the joint, not only becoming visible, but also loosening up the joint. Let me draw it...... 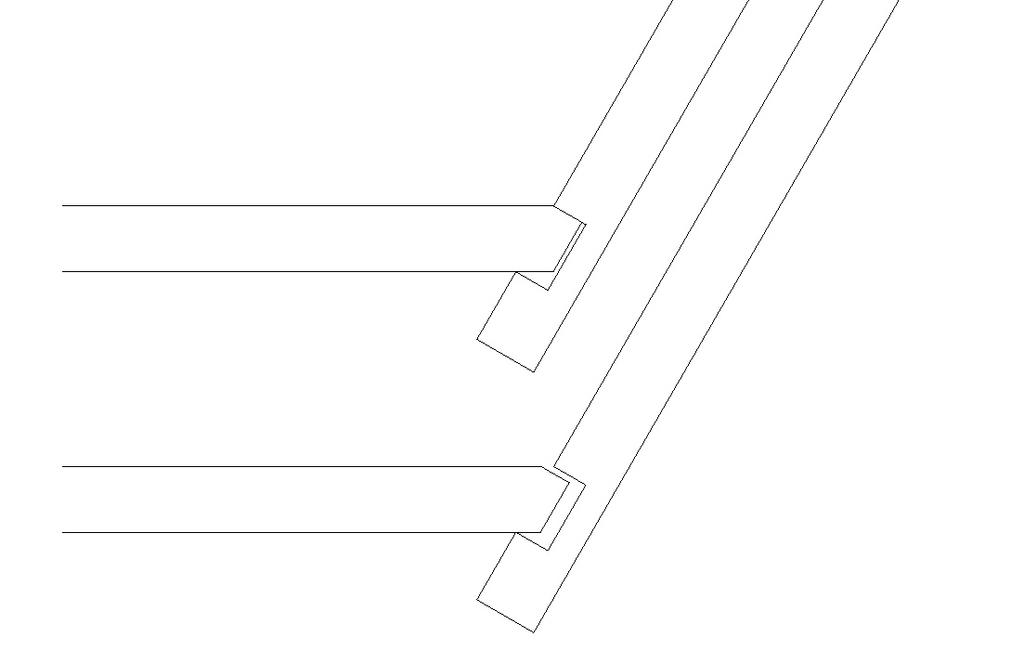 Also, if the baseboard expands, it will fit tighter in the groove, where it needs a bit of room instead.
(Btw, AndyKev has said elsewhere that the base is two bits of bookmatched elm.)
D

mark the area where you'll have a groove

You can also cut the groove with the iron retracted so that it's only cutting a corner (as in, it will be retracted into the plane and you can gradually advance it). What you can't do, as you found, is set it to zero depth or a little something more and then have a corner that has no skate under it because the skate's under the middle.

It's also not impractical to make a single use plane for this of the open mortise type. You can make them in an hour. It's acceptable if the geometry is funny to build the plane and add filler strips in it if needed (e.g., build it in parts).

thought I’d try this on a piece of scrape pine, I planed the bottom edge at an angle to give a splay to the side when this edge was put on a flat surface which you would want when the tray was sitting on a table etc & not a sharp edge as in Mikes diagram.