We live in a victorian cottage which has over the years had various modifications. One of the bedrooms has had an en-suite added in the corner and we wanted to add a wardrobe into the other corner but I think this would exceed the floor loading, can anyone confirm my calculations? I'm presuming the victorian timber is not significantly stronger than todays timber?

Looking at the joist span tables then

So our floor is less than 0.25 kN m2 (unless victorian timber is significantly stronger)

so assuming my floor is up to 0.25kN/m2 we could have a static load of 66kg which we are already exceeding!! So an additional wardrobe is out of the question.

Is this all sane and correct?

- are you sure that nobody damaged/cut any floor joists during installation of the WC etc. in the en-suite (my experience is that sometimes people are tempted to cut chunks out of joists to route waste pipes etc.).
- are you sure which way the joists run (nearly always perpendicular to the floorboards!) and therefore the actual joist span?
- I think that you need to separate the notion of point loads (like the WC, with someone sitting on it) from (more) uniformly distributed loads.
- I think you need to separate the notion of preventing collapse from the notion of preventing excessive deflection of the joists. A joist will deflect (damaging plasterwork and making room users feel unsafe) long long before it fails - the rules, such as they are, are designed to prevent both. In other words, concentrated loads are much better placed near the (supported) ends of joists - I assume this would usually be the case with a WC or a shower (which tend to get placed alongside walls).

PS I think that the standard design load for a domestic floor is 1.5 kN/m2 which is about 150kG per m2
R

You’re correct the joists have notches cut for 15mm pipe and cable runs so not perfect.

My lack of understanding of structural design in point loads, failure etc is why I’ve asked, I’m an electronic engineer so much happier in the land of amps/volts/circuits...

I did electrical/electronic engineering a long time ago (but covered the basics of structures in the first year, although have since taught myself more)! I think that small notches should be fine as long as they broadly follow the rules e.g. https://www.diydoctor.org.uk/projects/N ... _joist.htm

I think that if the joists are running such that they are seated into the wall behind the wardrobe, and there are three joists (at least) supporting the wardrobe, then it's very hard to see a problem. As I mentioned, you'll get ample early warning if there is a problem, from cracks in any plasterwork below, long before any possible collapse. I'm guessing your wardrobe will present a fairly evenly spread load over roughly one m2 - on that basis, you should be able to put a good 150kg on that before any hint of a query.

I really wouldn't worry (as long as the wardrobe isn't going to be excessively heavy and/or heavily loaded).

If you wanted to be hyper-cautious, I suppose you could arrange things so that the back wall took some of the weight of the wardrobe. There's always the possiblity of mould forming on the inside of external walls of old houses where air is trapped behind things like wardrobes.

You'll never get a collapsed floor. These calculations always stand or fall on deflection, never on failure. This isn't my field, so I'll leave it to the structural engineers here, but your issue is always going to be how much movement with its associated decorative issues you can tolerate, rather than whether or not you'll ever have a collapse.
R

Thanks for all the responses. I’m probably worrying unnecessary but I always like to be sure on these older properties that didn’t follow any building regs but relied on the experience of the builder, especially as I understand mine was built by the local farm labourers for them to live in....

The rear joist is close to the wall but not tied into it. I’ve attached a rough sketch. 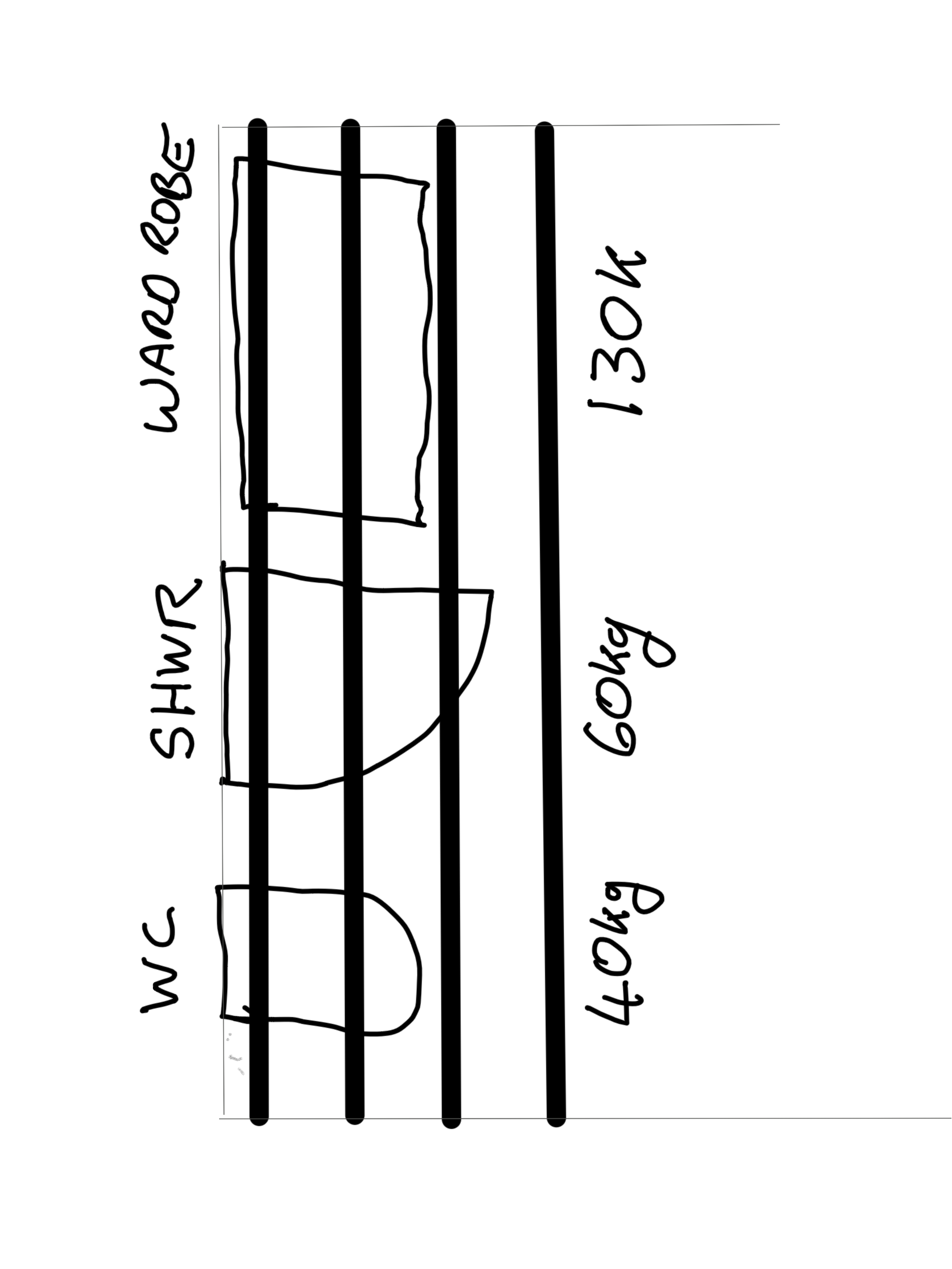 Don't forget to add 80kg to the shower and WC to account for their usage!

I'm sure all will be fine - seriously. The maximum deflection will be in the centre of the joists - somewhere under the shower, based on your drawing. The floorboards (I'm guessing with two cut nails at each point where they cross a joist) will help to spread the three loads evenly across the three (and other nearby) joists - as, to a small but not-completely-trivial degree, will the ceiling laths underneath (assuming there's an original lath & plaster ceiling below).

You might expect to see noggin(g)s or herrringbone struts between the joists - this further improves the stability of the floor and makes the joists work together, rather than individually - I think an SE would call this "compound action", but I'm probably wrong. You might consider adding some noggins near/around your shower/wc/wardrobe if there are none - but it's very likely not worth the effort - and I certainly would not try to anchor the joist to the wall mid-span.

Thanks W2S, there are some herringbone struts at the middle of the joists. I’ve since had 4 people up there gently bobbing up and down together and there’s absolutely no sign of any movement.

....I’ve since had 4 people up there gently bobbing up and down together... [/quote said:
A photo opportunity if there ever was... :lol:
Click to expand...

S
Converting a cellar to a workshop - practical considerations
2

O
Stoopid newbie questions on buying wood - can you help me?