Contacted Paragon Paints to see if they had a match for Parkinsons vices which were originally a dark red. Just got their answer which may interest anyone wanting to colour match.

"Hi Steve,
I did my own not so long ago and created a bespoke match.
I have been meaning to add it to the website for some time now, your email was the nudge I needed. Please see BS381C 452 Dark Crimson - Paragon Paints
I used a semi-gloss but the finish level is entirely your choice.
Regards,
Steve Perks
Paragon Paints"

So it's a Dark Crimson and behold it is now on their website - see link above.

Best regards to all....
Steve O 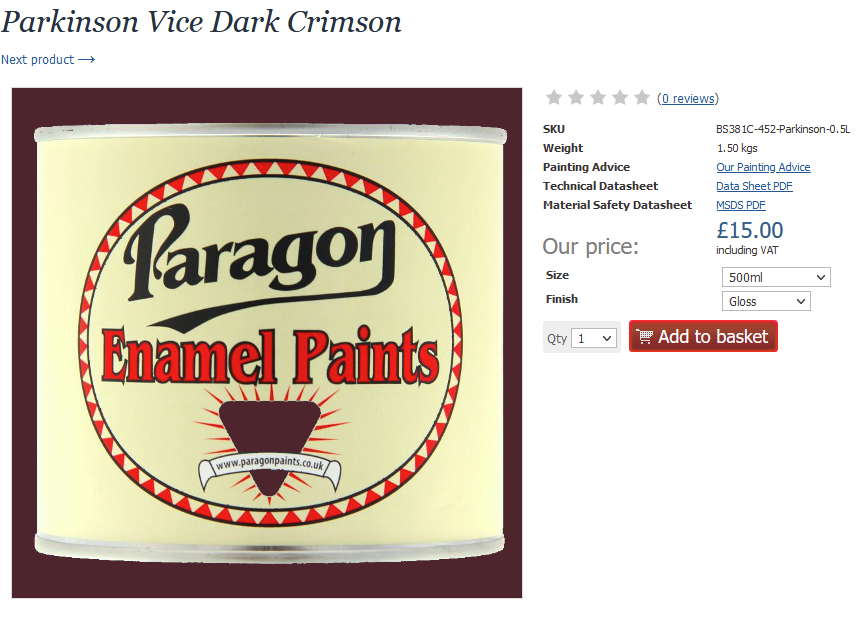 Cool. I just painted mine Record (roundel) blue as I had half a tin left. Paragon’s paints are excellent.

Out of curiosity i checked my vice but could not find any trace of red any where in hidden nooks where original paint may of stayed were all Parkinson vices red and how would i date it as i got it second hand of an old chap who said he had it for years , He was going to dump it at tip but thought i might find use for it
Last edited: 10 Feb 2022

Thanks for the comments.
I think both Woden and Parkinson used different colours for either/or different product groups or markets (eg. UK or International).
example Woden - normal colour for products was Dark Blue (Darker than Record) but their 186S was Green. 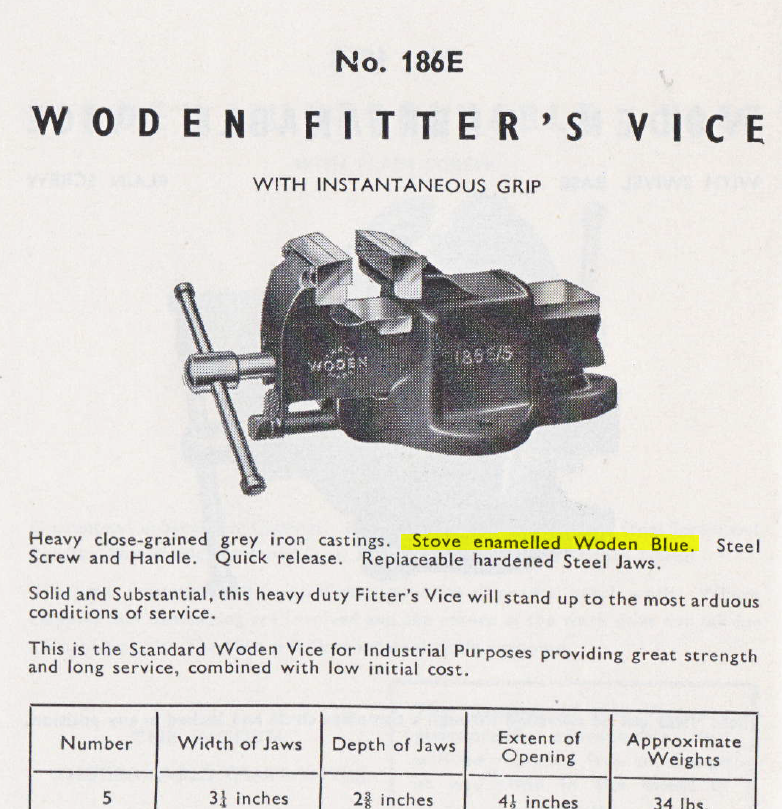 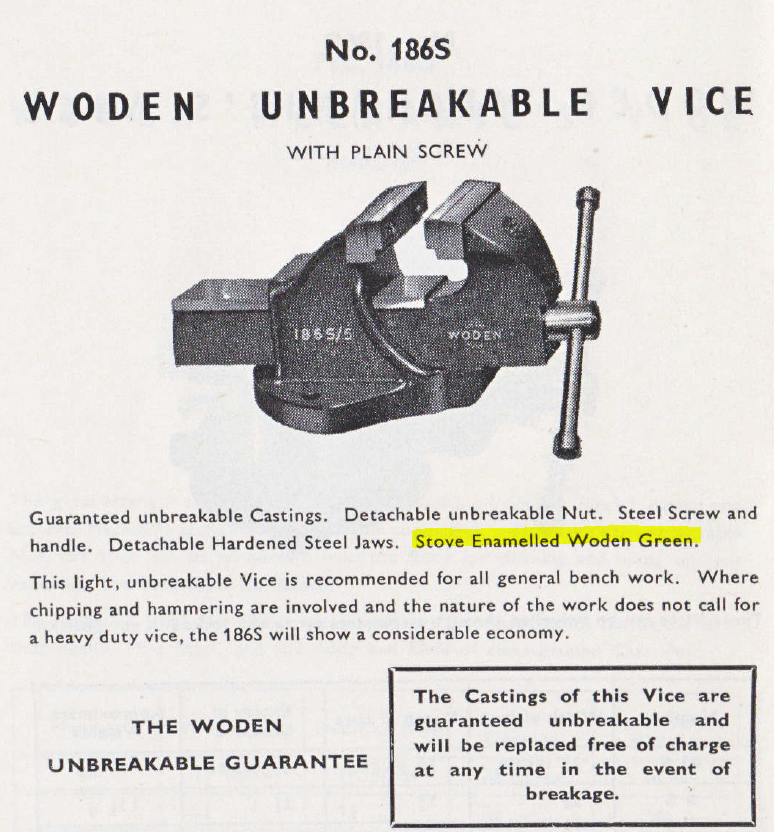 I think this is a good example of parkinson red (which to be fair does look brighter than the new Paragon Dark Crimson they now offer, but then photos, lighting and reproduction alters colours) 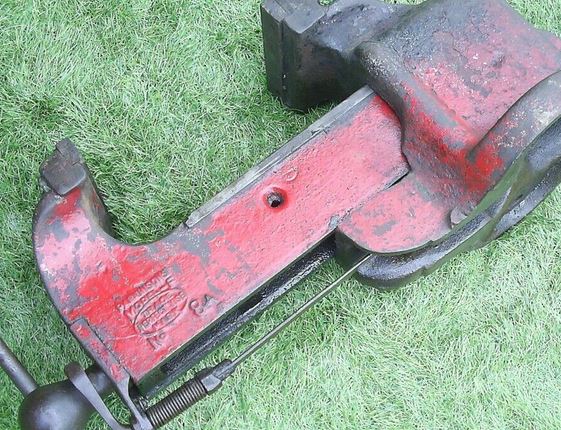 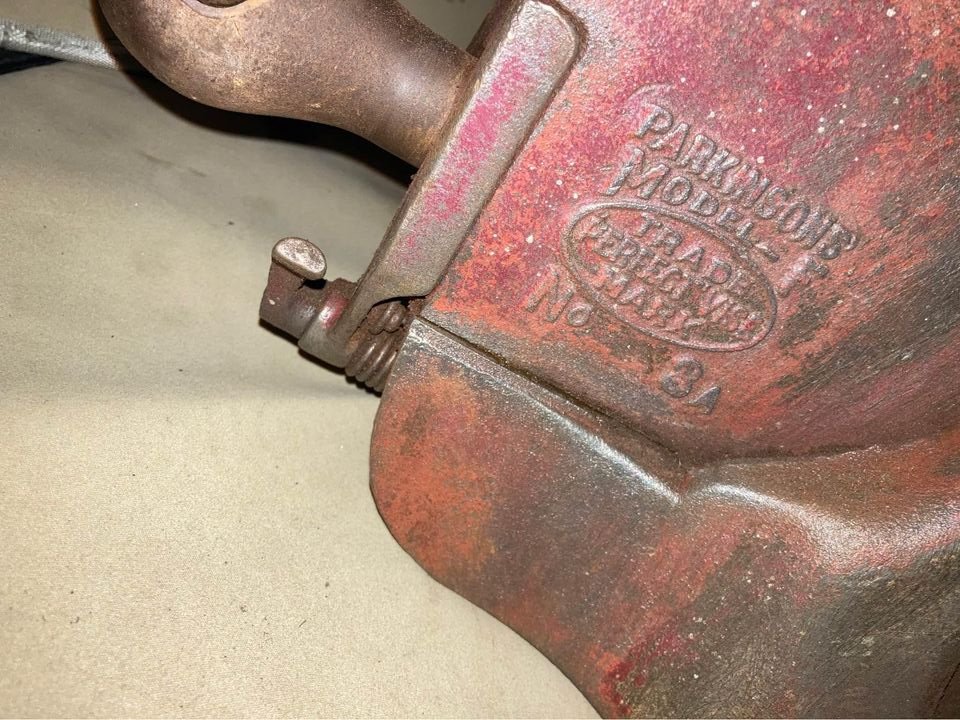 Fortis is a light sort of "Apple Green" from seeing some.
This is one I own - a size 11. 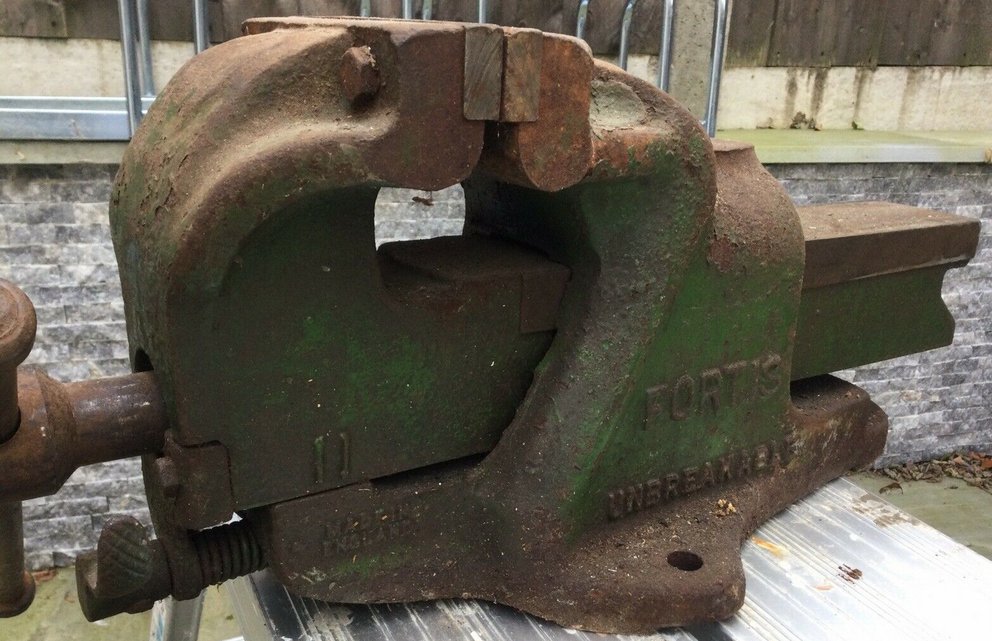 I have 2 old Parkinsons, a 14 and 15, both refurbished as they were rusty and both had traces of dark red paint in some of the corners, I know for certain that neither had ever been repainted so the red was original. I didn't repaint either as they aren't for show and would just get chipped so just oiled them and they look good to me and work well.

I also have an old Parkinson woodworking vice that a customer gave me about 20 years ago.....Not sure which model it is but its definitely got remnants of the deep Red colour on it and I'm sure it's never been repainted....

Thingybob said:
It might be that woodworkers vices by Parkinson were green as the ones above are all engineers vices
Click to expand...

Not sure its that easy. Look at this no 15.
Repainted blue on the front..
But the rear is old Parky red. 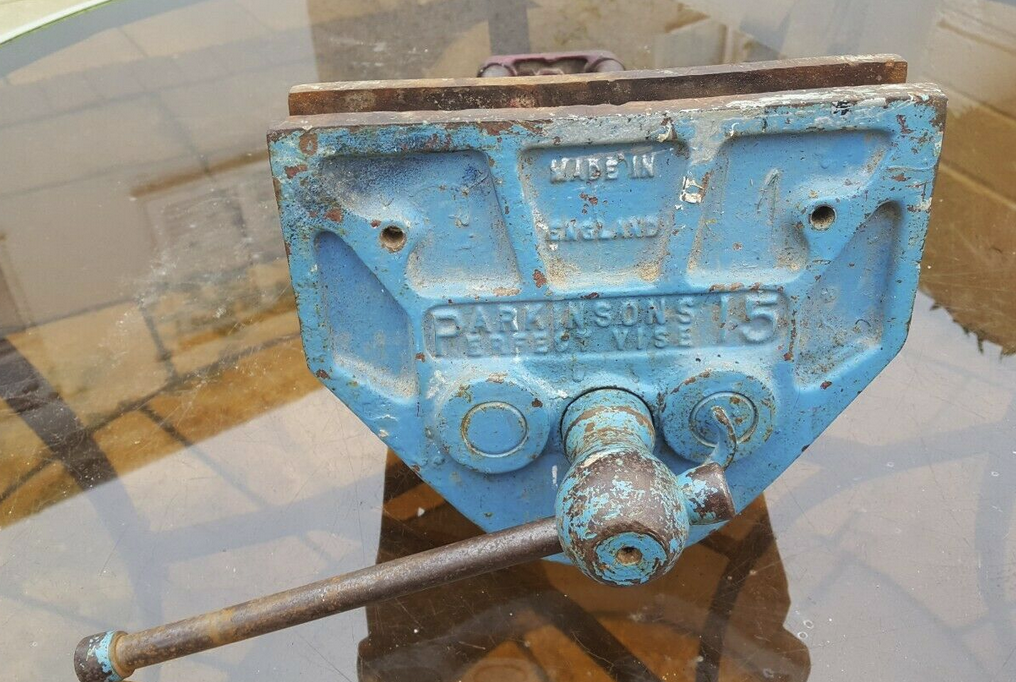 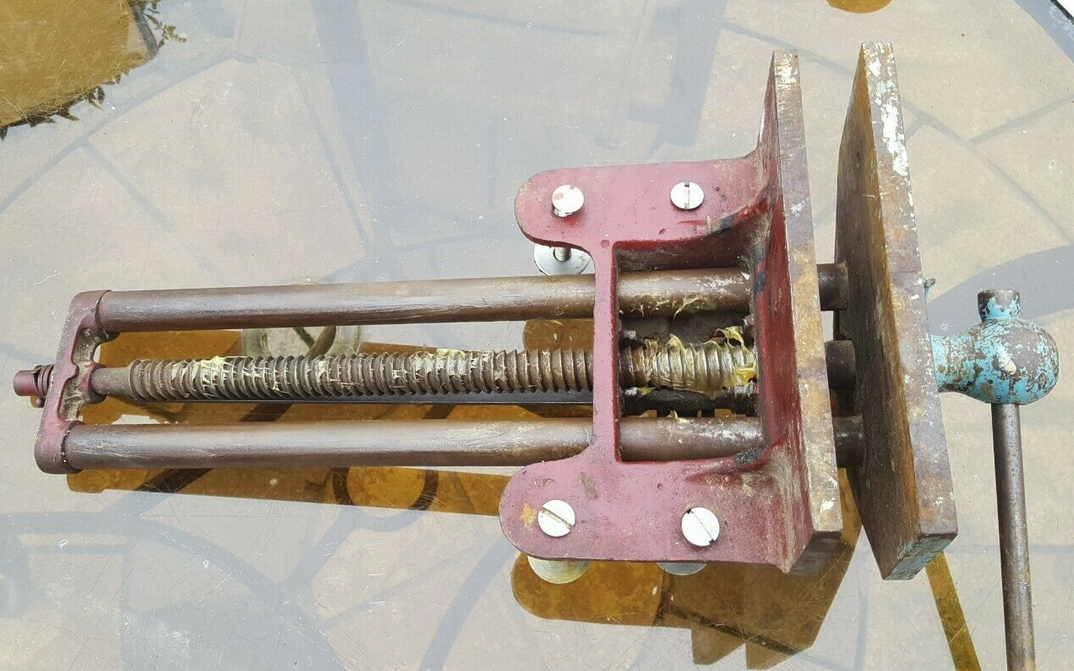 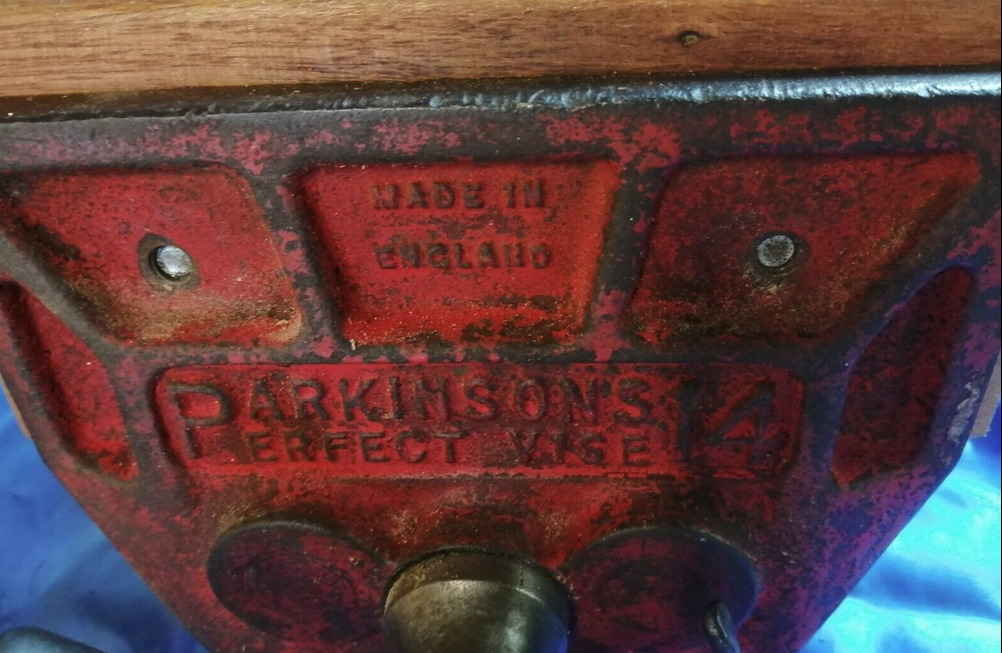 Lots on ebay - all red painted originally sometimes with later paint over the top in blue or black or green.. I suspect Parkinson painted their stanmdard red and green for certain customers/markets.
br
Steve
S

I repainted a Parkinsons 8F vice with some (supposedly dark) red 2K spray paint from a can (see pic), but it turned out to be a much brighter red than expected. Despite claiming to be a 2K paint I don't think it ever really set that hard (easy to scratch). I assume the Paragon enamel paint will be much tougher? 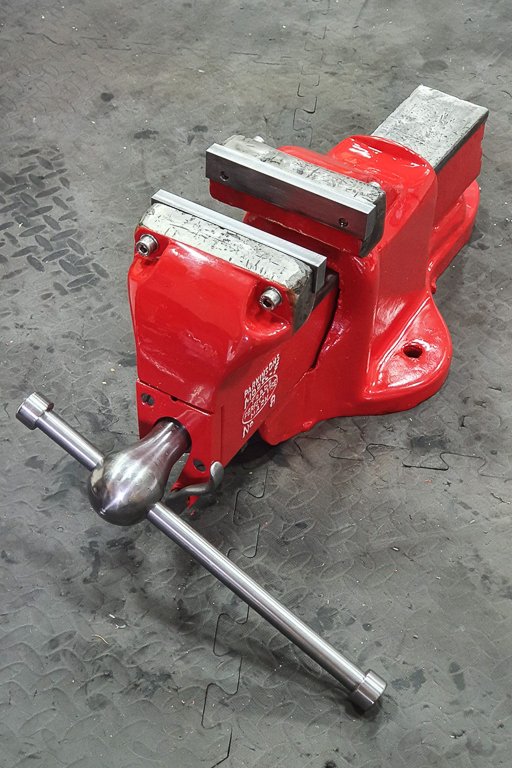 Looks nice though. Before I got the answer from Paragon about the Crimson red being now available I have just repainted a Parky No 1 in Paragon Cherry Red.. see photos. 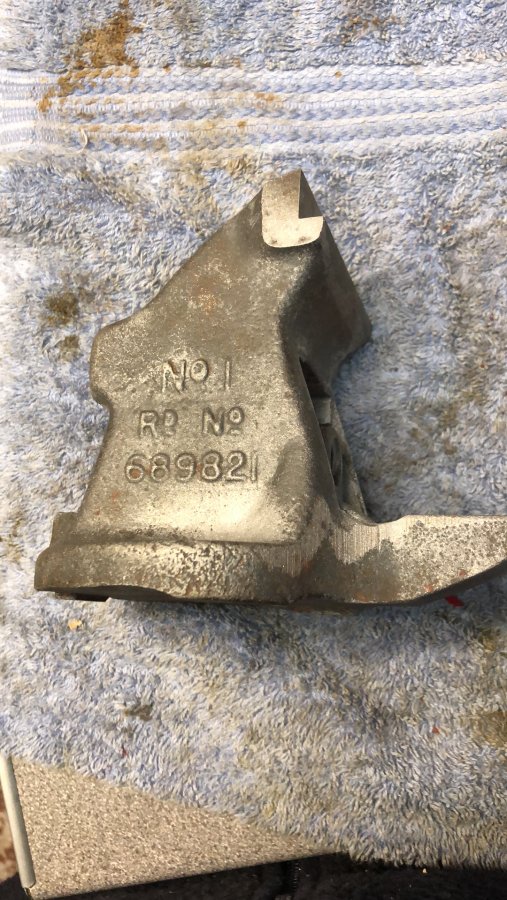 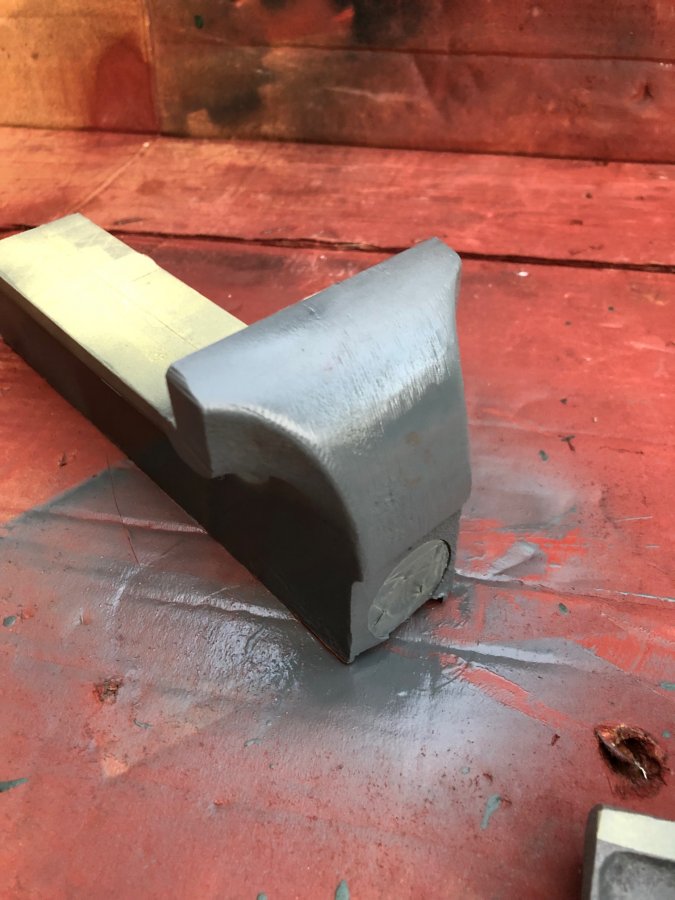 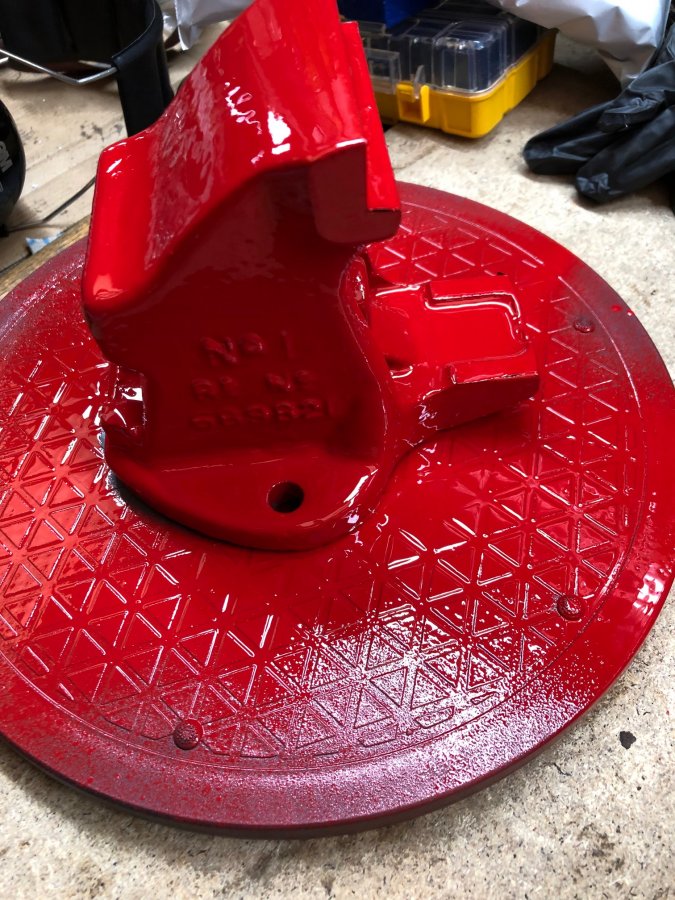 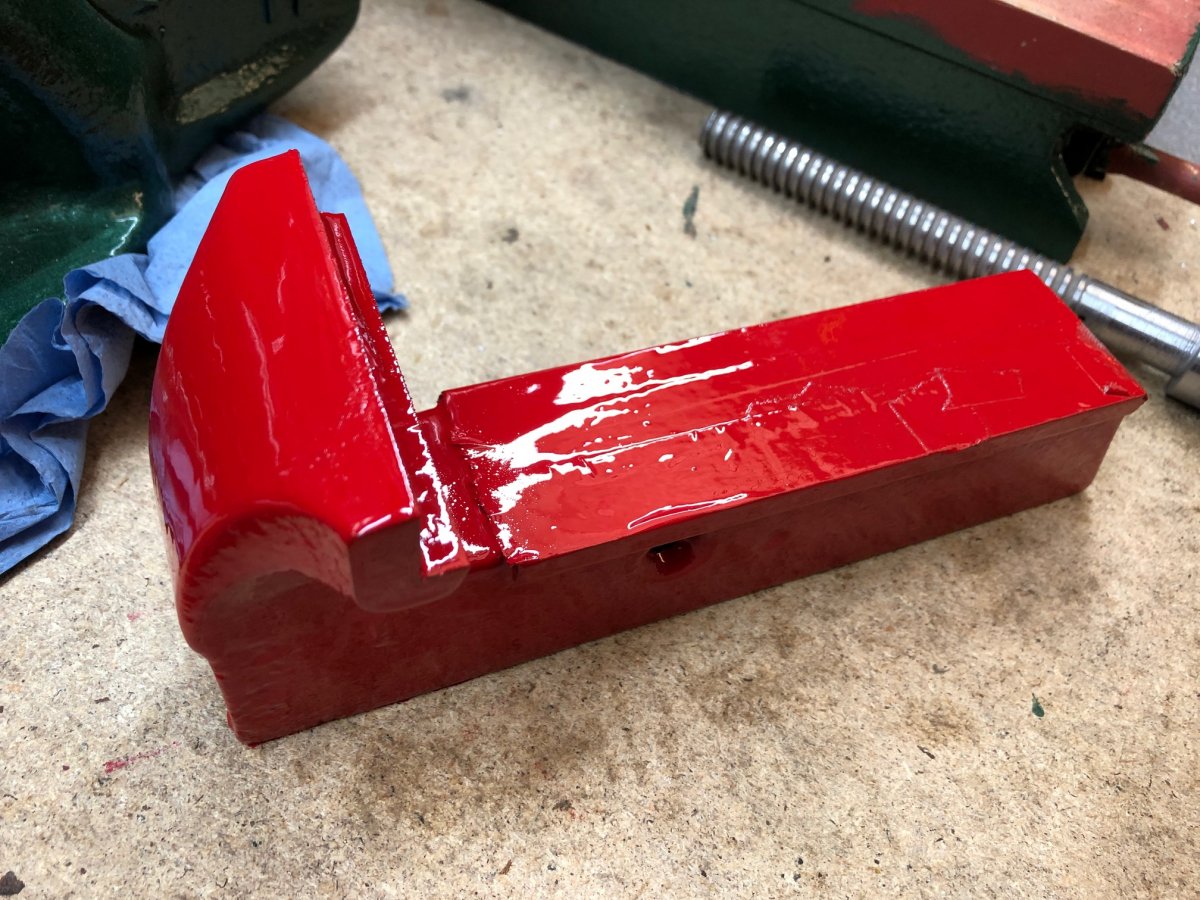 Personally I like the Cherry Red better than the Dark Crimson but that's personal taste. 8o)

Because it is new

The old one was in really poor condition: 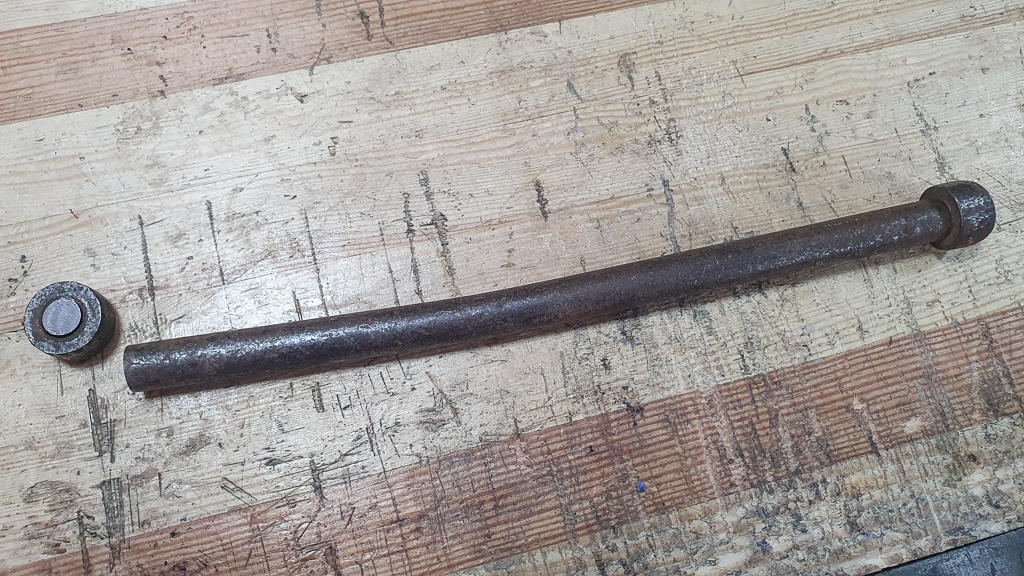 So I made a new one on the lathe: 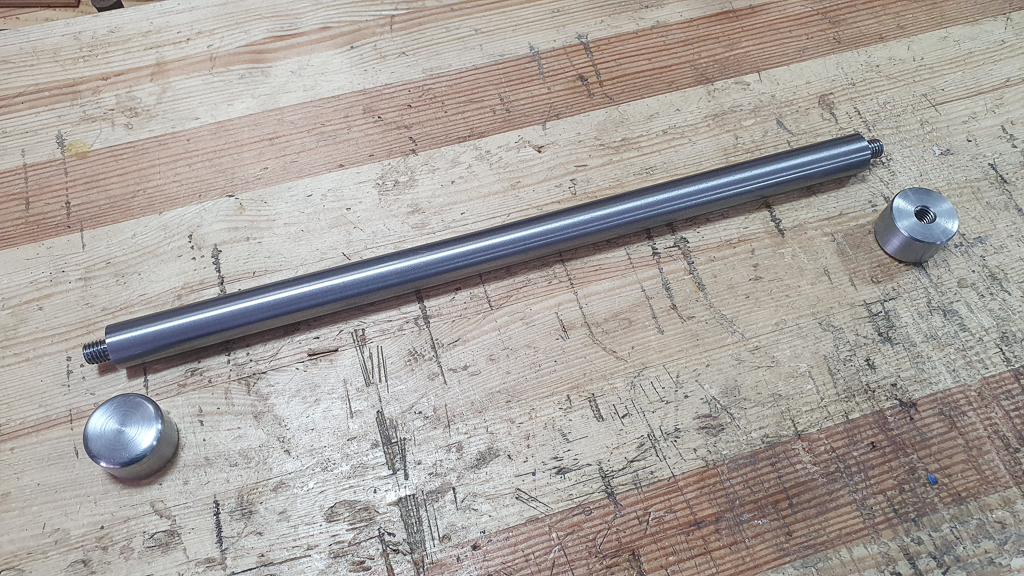 Hi, That handle is superb. Whenever I renovate vice and need a new handle it's a nightmare. Small ones you can buy on ebay from a european distributor for about £10. Larger ones are only available from an ebay seller @£30 each! I have no lathe, nor even know how to use one...
Would you be interested in being a source of supply for these? Wouldn't be offended if you say no - just wish I could make my own... which won't happen.
I also guess you put the spindle in the lathe too to get such a fine finish on that... jealous!!!!!!! I have to do it manually with 1" wide emery tape and often around the existing handle..not easy at all. Let me know... 8o)
S

The rod is (from memory) 16mm diameter bright mild steel, about 30cm long. The two end knobs are from 25mm steel. At the scale I buy material, that's around £10 in material costs alone; so actually £30 for a ready made one is probably not that bad.

I could make a small number for individuals if required; though any more than that would require a bit of thinking (to work out a way of doing them "at scale").

Note that you could make the above without a lathe:

1. Centre punch the ends of a 16mm rod, drill each end, and tap a thread. Ideally do it in a drill press, but it's not critical in this application.
2. Take a couple of bolts with the appropriate thread and chuck them up in a drill. Spin the heads against a disc or belt sander to turn them round.
3. Chuck the 16mm rod in a drill (maybe using a short piece of threaded rod in the tapped hole on one end - as 16mm is too big for most chucks). Spin it up and sand shiny.

If you had some 25mm rod and a hacksaw, you could also cut discs for the end knobs, centre punch, drill and tap them, then use a bit of threaded rod to join the rod and knobs (as both would now have female threaded holes).

Hi,
Thanks for the reply and detailed explanation.
I can follow all this but the end knobs manually sanded would probably ruin the effect I think... certainly with my meagre skills.
Well, no problem - but I appreciate you considering the option very much.
S

You'll be surprised - the rod and knobs above are manually sanded/polished (in the sense that it's just wet and dry paper held against the spinning metal on the lathe).

You can make a simple support (block of wood with a hole in it, clamped to a disc sander's table) to keep a bolt held square to the disc sander face whilst spinning it in a drill. I've used a similar technique to hand clean/polish rods that are too big for my lathe.

I'd be quite happy to make you a few handles if you need though. 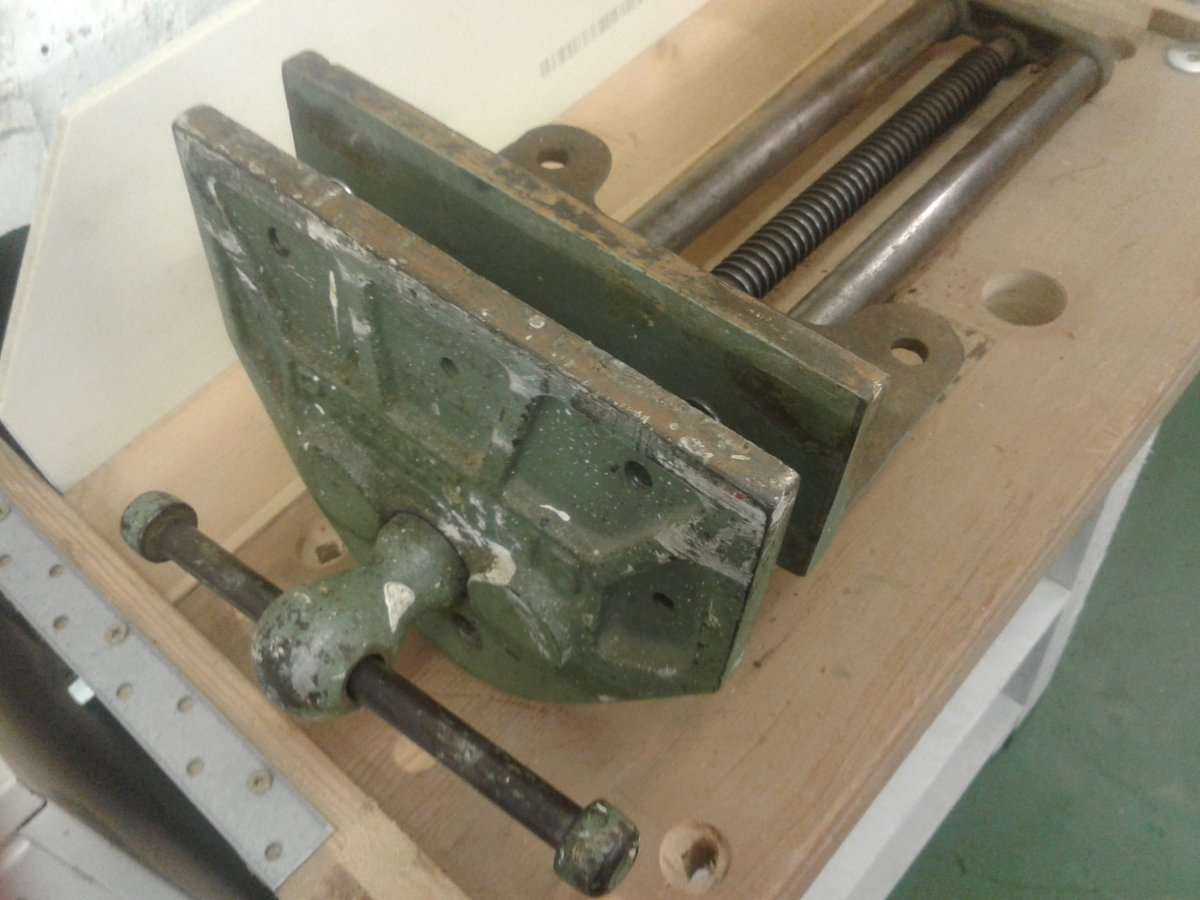 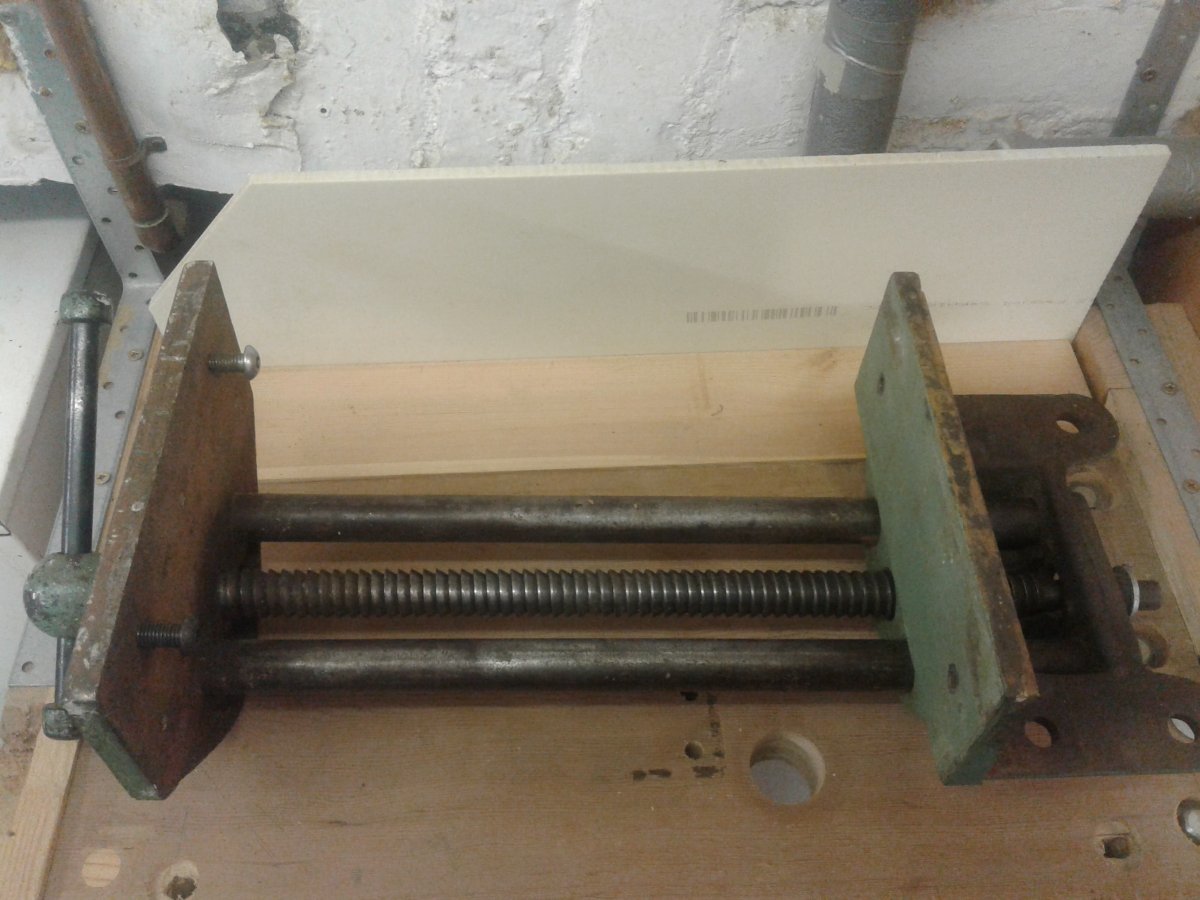 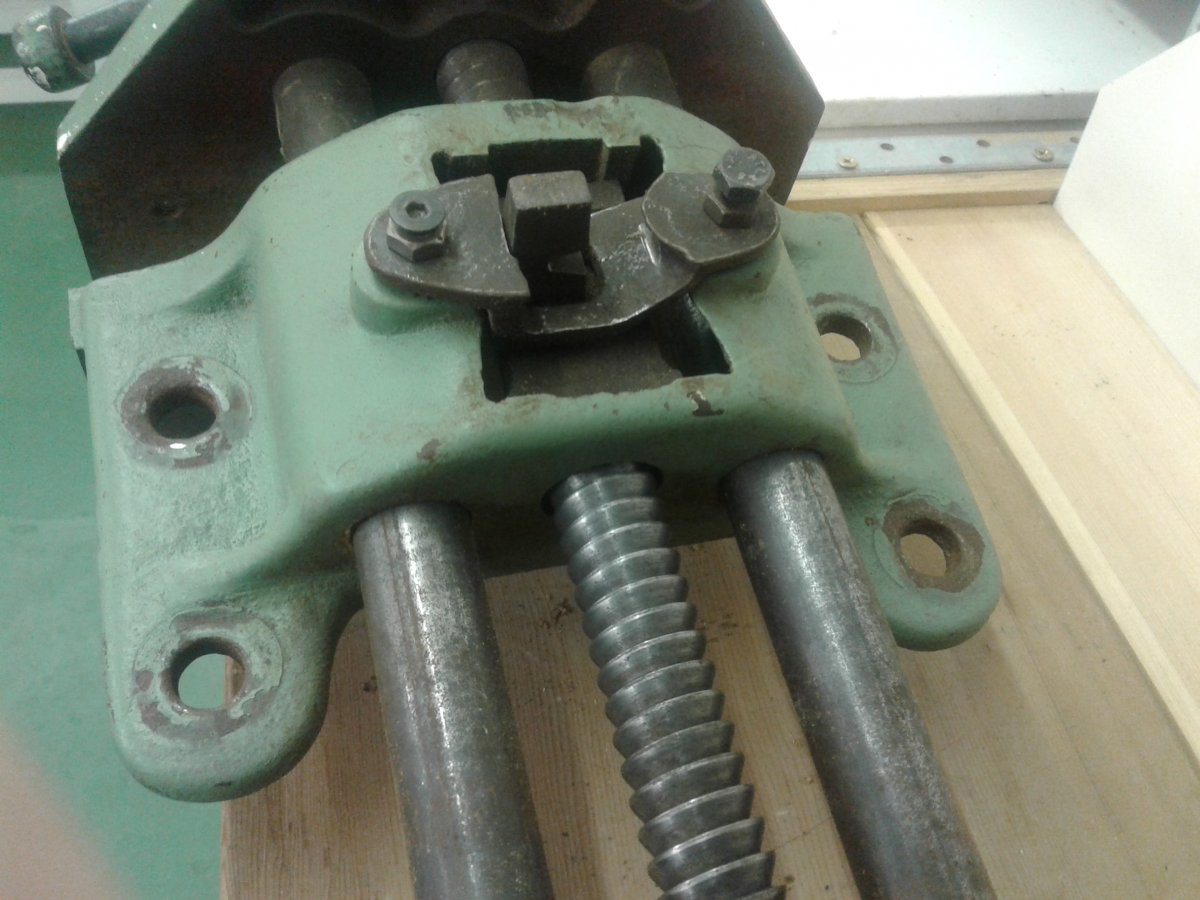 sploo said:
I repainted a Parkinsons 8F vice with some (supposedly dark) red 2K spray paint from a can (see pic), but it turned out to be a much brighter red than expected. Despite claiming to be a 2K paint I don't think it ever really set that hard (easy to scratch). I assume the Paragon enamel paint will be much tougher?

I used the Paragon enamel for refurbishing 4 Record vices and is brilliant. In terms of Parky red, does anyone have the contract to reproduce it

Peanutcoxy said:
I used the Paragon enamel for refurbishing 4 Record vices and is brilliant. In terms of Parky red, does anyone have the contract to reproduce it
Click to expand...

Hi, Yes, it's Paragon Paints. If you scroll to the top of this post there's all the info. They call it Parkinson Vice Dark Crimson.
br Steve

K
How to build a P51D Mustang