Hi, I've searched the net without any joy for a charnwood p200 router manual as I want to change the brushes. I've never changed any brushes in a router before (or anything else for that matter) so I want the drawings to guide me. Can anyone send me a link please?

Froggy... is it the model you bought off me some time ago? If so I might be able to find the brushes for it. Also it is a badged, generic model so any similar manual should do.

Hi Steve, Yes one in the same! I haven't touched it since I spoke to last but decided to either fix it or through it. I remember you telling me it might be the brushes so I took the top off it today, but couldn't see the brushes so searched online for tech drawings or a manual but couldn't find anything! I'll check Trend for a similiar model as I believe they are compatable with some of the Trend routers.
S

Froggy":e8hqgmwc said:
Hi Steve, Yes one in the same! I haven't touched it since I spoke to last but decided to either fix it or through it.
Click to expand...

Sorry Froggy, when I heard no more I assumed you'd fixed the problem.
I will have a look around and see if I can find a similar model with instructions.
If all else fails send it back to me and I'll refund you.

Don't worry about it Steve. It's just one of those things. If I can't fix it's not worth sending back and I don't want a refund. If you can find the replacement brushes that will be great. I'll have another look tomorrow at the router and see if I can find the existing ones.
S

I've managed to borrow from a friend a quite similar looking model, Wickes branded but from memory it looks very similar. I'll have a look and see if I can tell how the brushes are fitted and what sort they are. Will get back to you tomorrow and let you know how I get on.
S

Well.. some positive news. I found the spare set of brushes last night. I also partially dismantled the borrowed router to see how to fit them. It turned out to be quite straight forward. So.... for Froggy and anyone else who might be in a similar situation here goes. 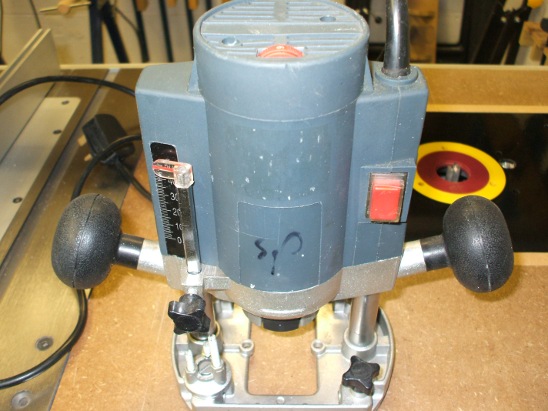 This is the Router that I've borrowed, from memory I think it's the same or very similar. 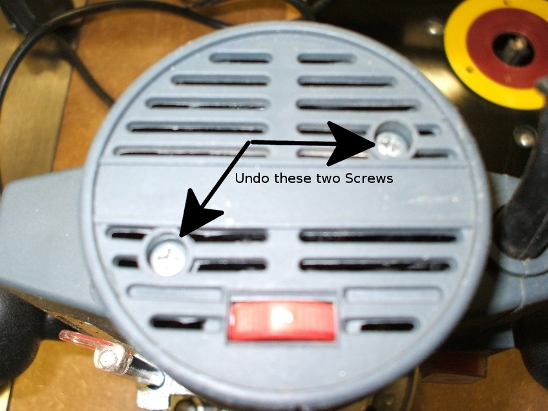 Undo the two screws and pull the cap off. It was quite stiff on this router but after some tugging came off OK. 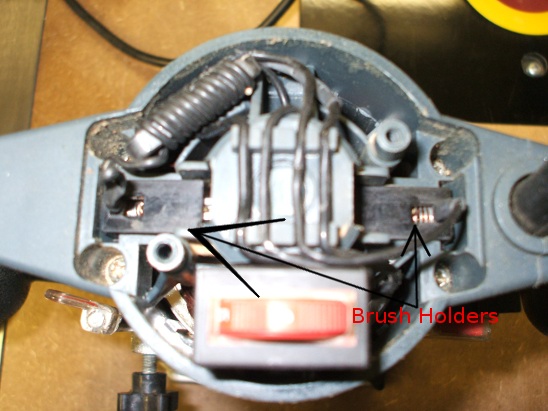 The brush holders just pull straight up. You may have to push the ends of the brush in with a small screwdriver. There are two small tabs holding the brush in the holder, push the brush in and straighten both tabs. The brush will then pull out.
The brushes on this one were fine but there was a lot of sawdust around them which I blew off with an air line. I also wiped the copper 'contacts' with a tissue.
Replacement is just the reverse of the above really. Inside the cover were two loose black pins which hold the brush holder in place. Make sure they don't drop out.
And that's all there was to it.

Great news Steve, and thanks for going to the trouble you have, it's much appreciated.

No problem Froggy. If you find you do need the Brushes give me a PM with an address and I'll post them off to you.

Hi Steve,took the brushes out today. They didn't look wworn or damaged, but I gave them a rub with a bit of wet and dry and cleaned some dust from the surrounding area and tried the router again and it worked fine! So no need for the other brushes thanks. And thank you for all you help, it will come in useful again in the future, I'm sure.
S

Hi Froggy, glad to hear it's working now, was feeling bad about it.
Well done for sorting it and hope it proves useful to you.
You must log in or register to reply here.

A
Seeking Assistance regarding router/s and router table inserts please