Can a rebate plane be tiny / must it be longish?

This is just an idle bit of speculative thinking born of a thread which appeared recently. Unfortunately I've forgotten the title but if I remember aright, Andy T put up a picture of an odd, very short little device for cutting rebates. My moving fillister rebate plane is around 9 - 10 inches long and I began to wonder if that has to be the case. I would have thought that nearly all rebates are cut on flattened pieces of wood where the edges are square to the face. Given that the length of any plane is proportional to its flattening ability, you have to wonder if much length on a rebate plane is justified because it is simply not required to do any flattening.

Therefore, logically speaking, a rebater could be a tiny, one hand device. I realise that you instantly run up against real world considerations and a bit of length is probably reassuring. But theoretically speaking, what would the parameters for a rebate plane be?
N

I would imagine that a short rebate plane would make it more difficult to start and finish the cut as there is less sole registering on the wood, risking the blade digging in.

Interesting question Andy. And an excuse to ramble on for a bit...

I think you might be thinking of this lovely little bullnose rebate by Preston, shown in my normal size hand for scale. 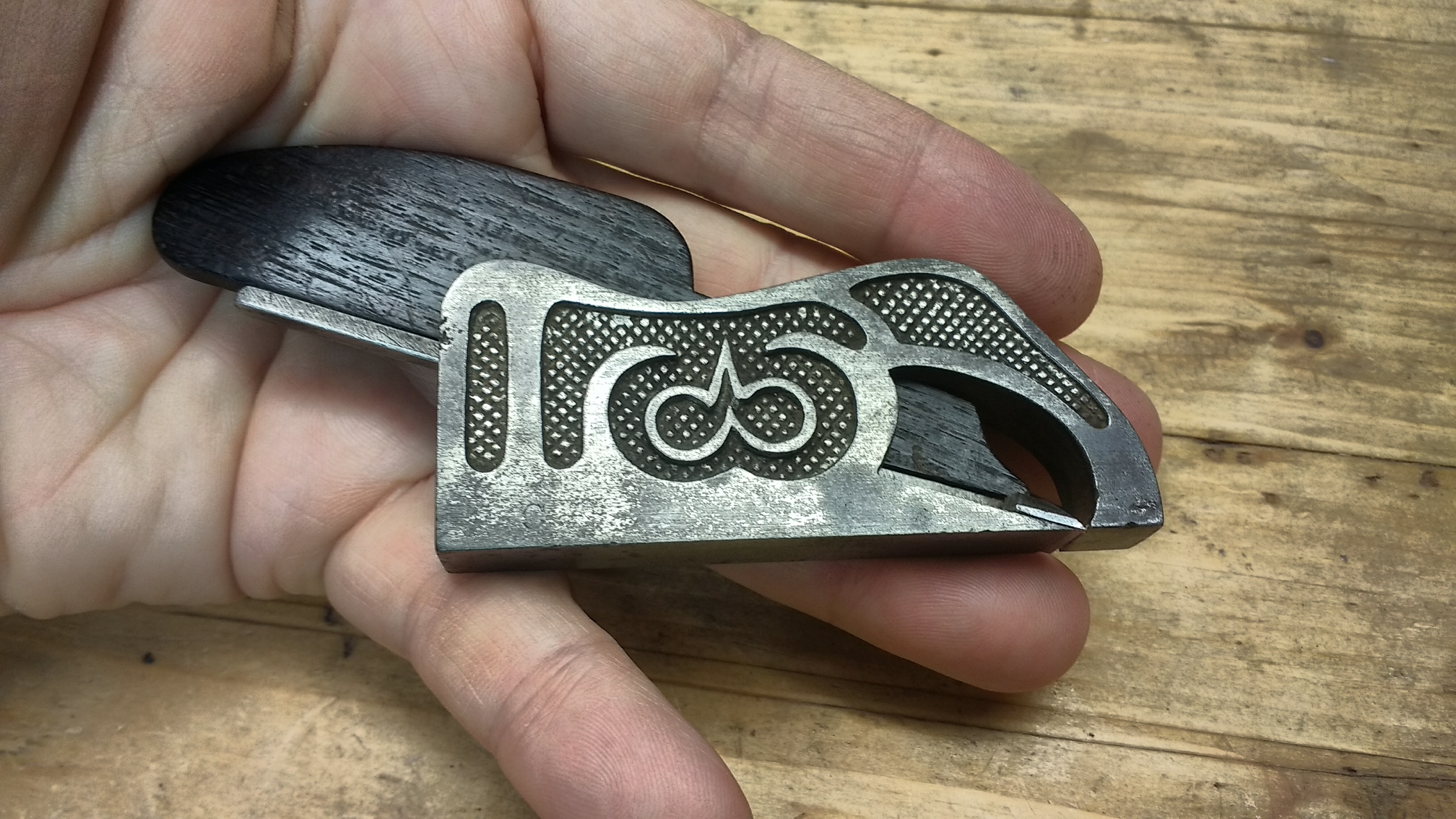 It's a dinky little thing that I was pleased to be able to find a use for. Maybe originally it was bought by people making big mahogany cameras or delicate ladies' writing desks.

Going back to basics, most rebate planes are about 9 1/2" long. I suggest this is a perfect compromise. Long enough to be gripped in two hands, not wasteful of raw material, not too big to store. (Moulding planes started off being longer but were soon standardised. Plenty remain from the C18 which were cut down to fit the owner's tool chest.)

This sort of thing 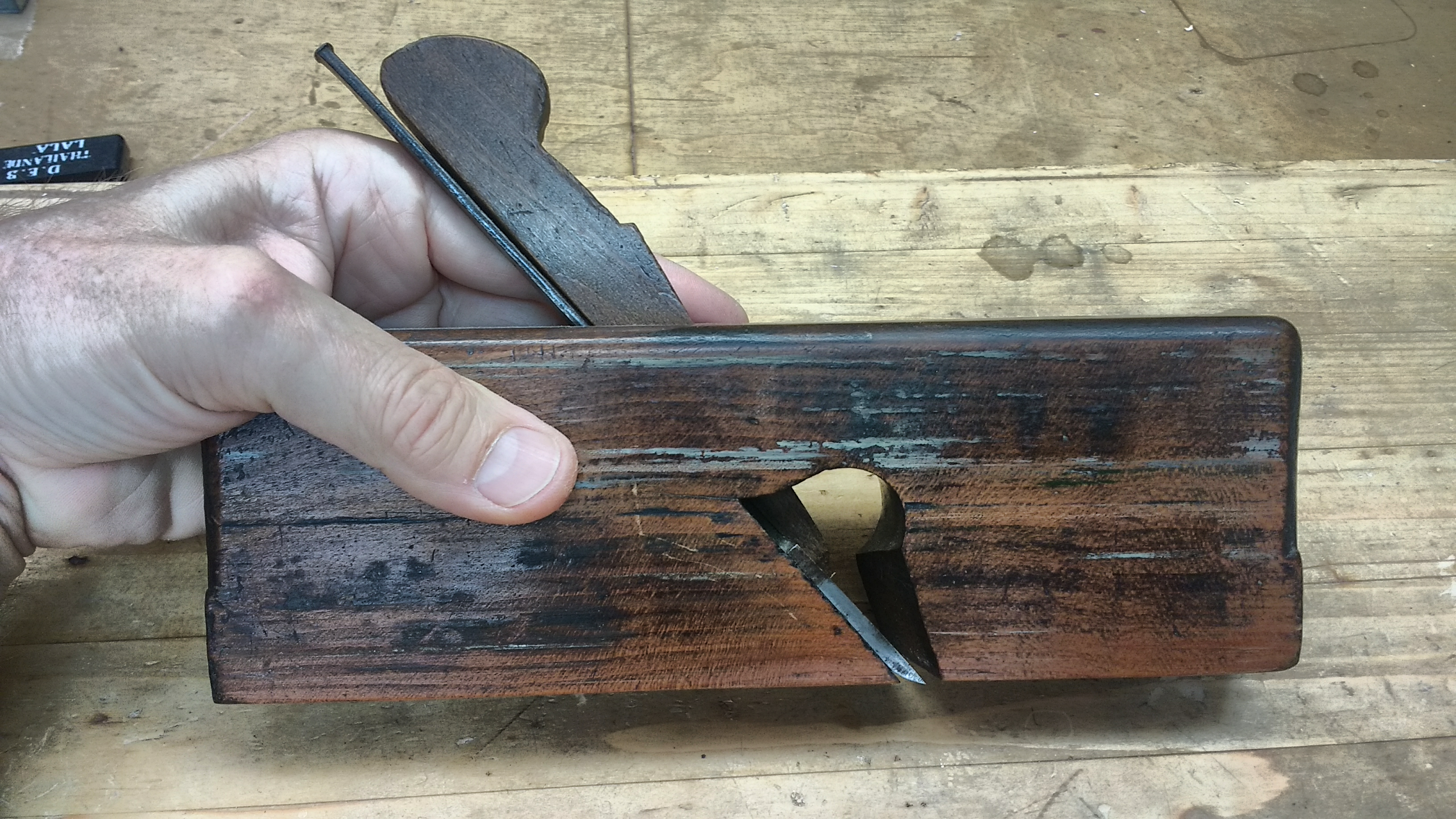 Or this moving fillister 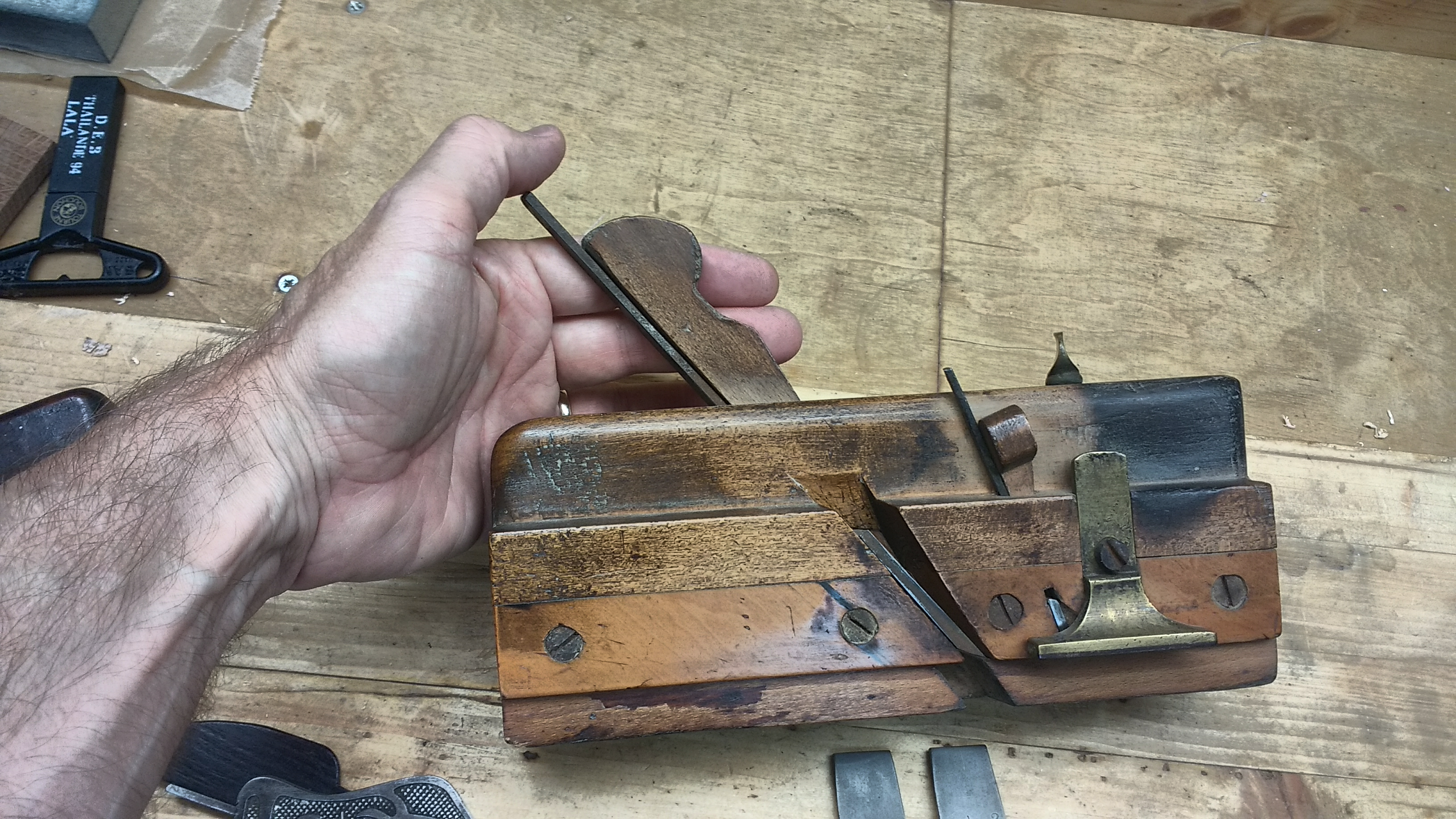 The last two are examples of really common tools that we're all familiar with. I think they are common because there must have been thousands of ordinary joiners on domestic work from say, 1850 to 1950.

If you look around at the joinery work in a house from that period, those are the sort of tools that would be needed. Capable of taking a thick shaving in softwood and getting on with the job.

I expect quite a lot of joiners would have had a metal bullnose plane - handy for chamfers or trimming tenons. 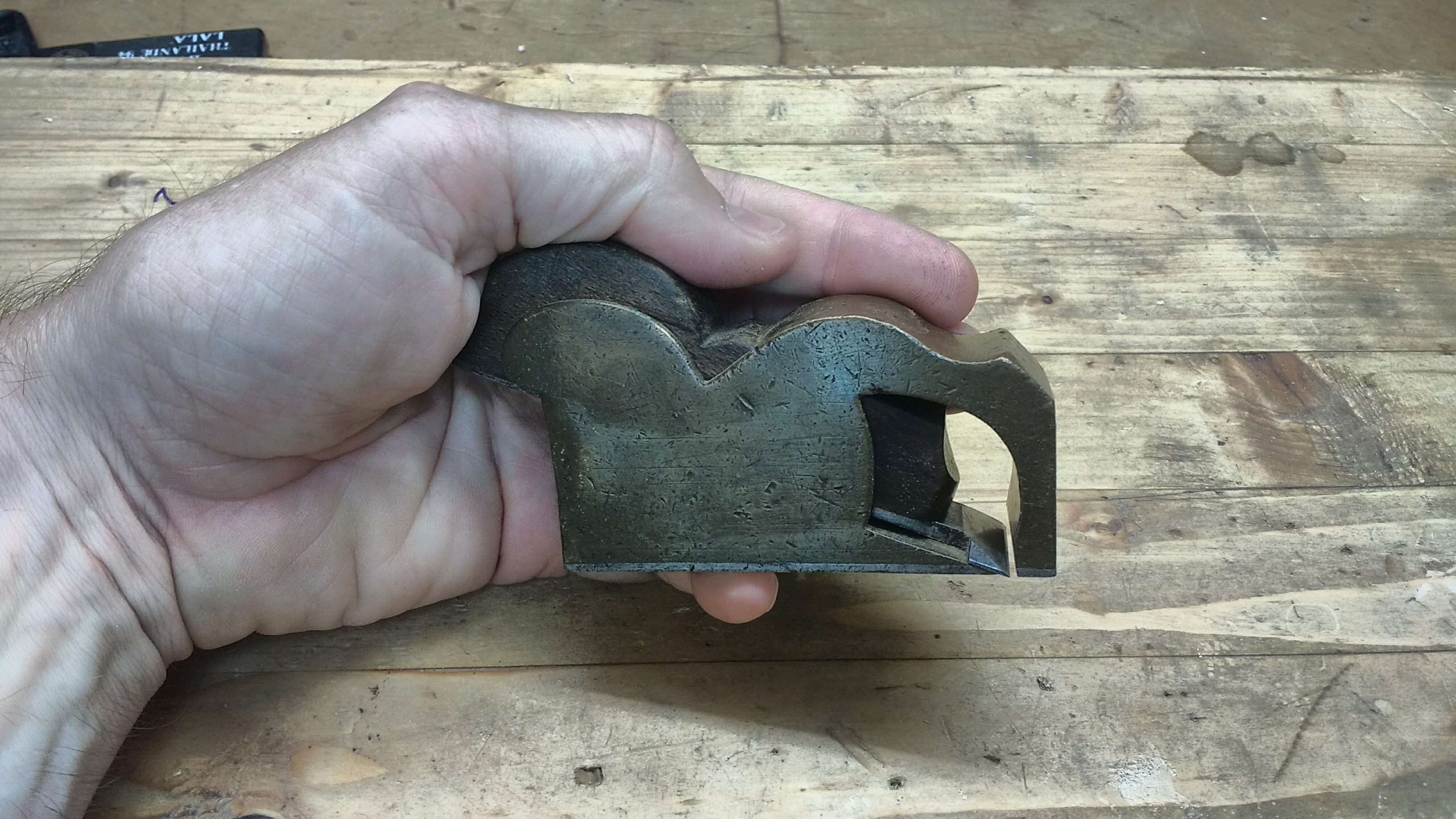 Not so many would have needed one of these. 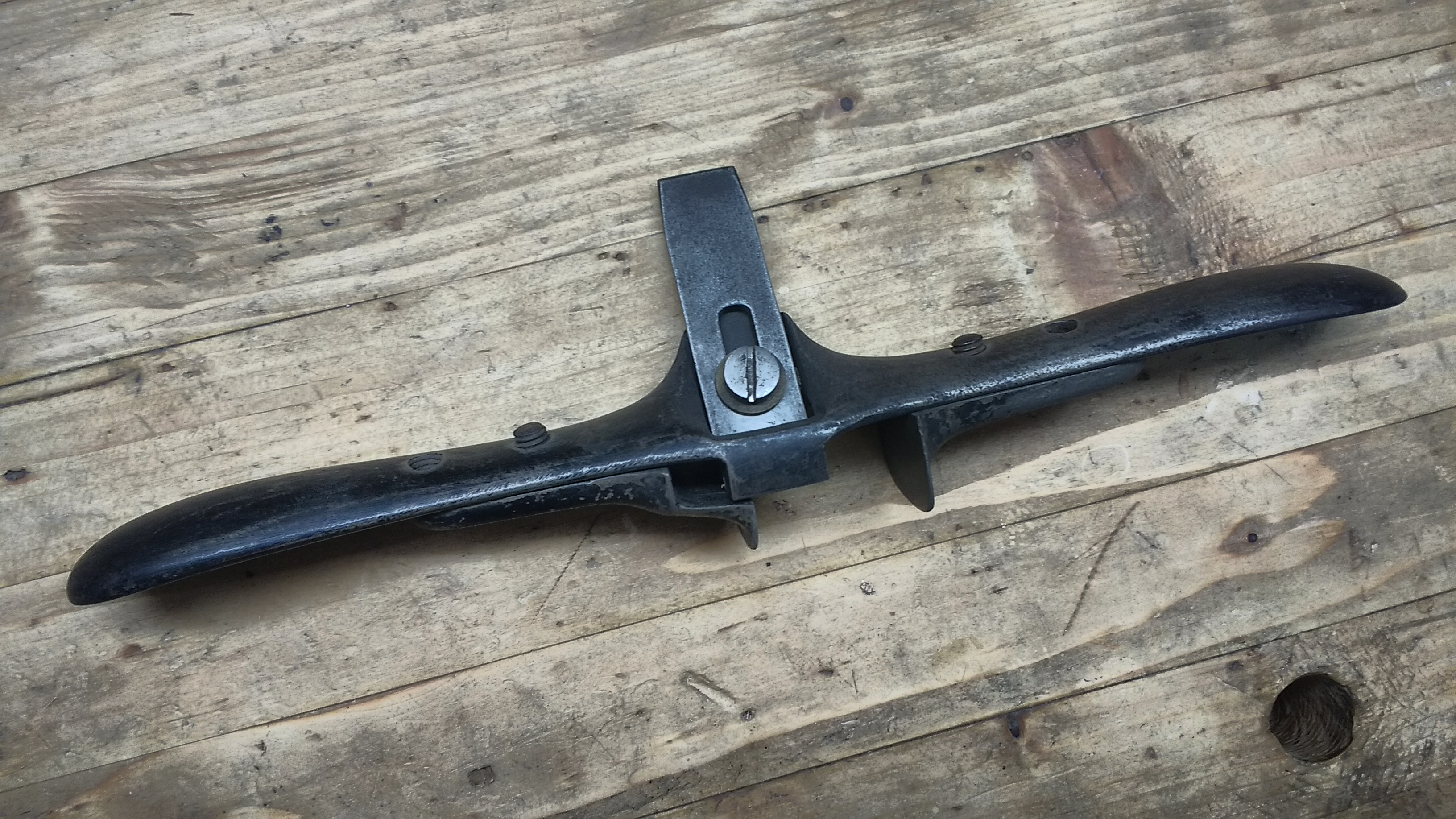 It's a rebating shave, so qualifies as being very short, if you ignore the handles. 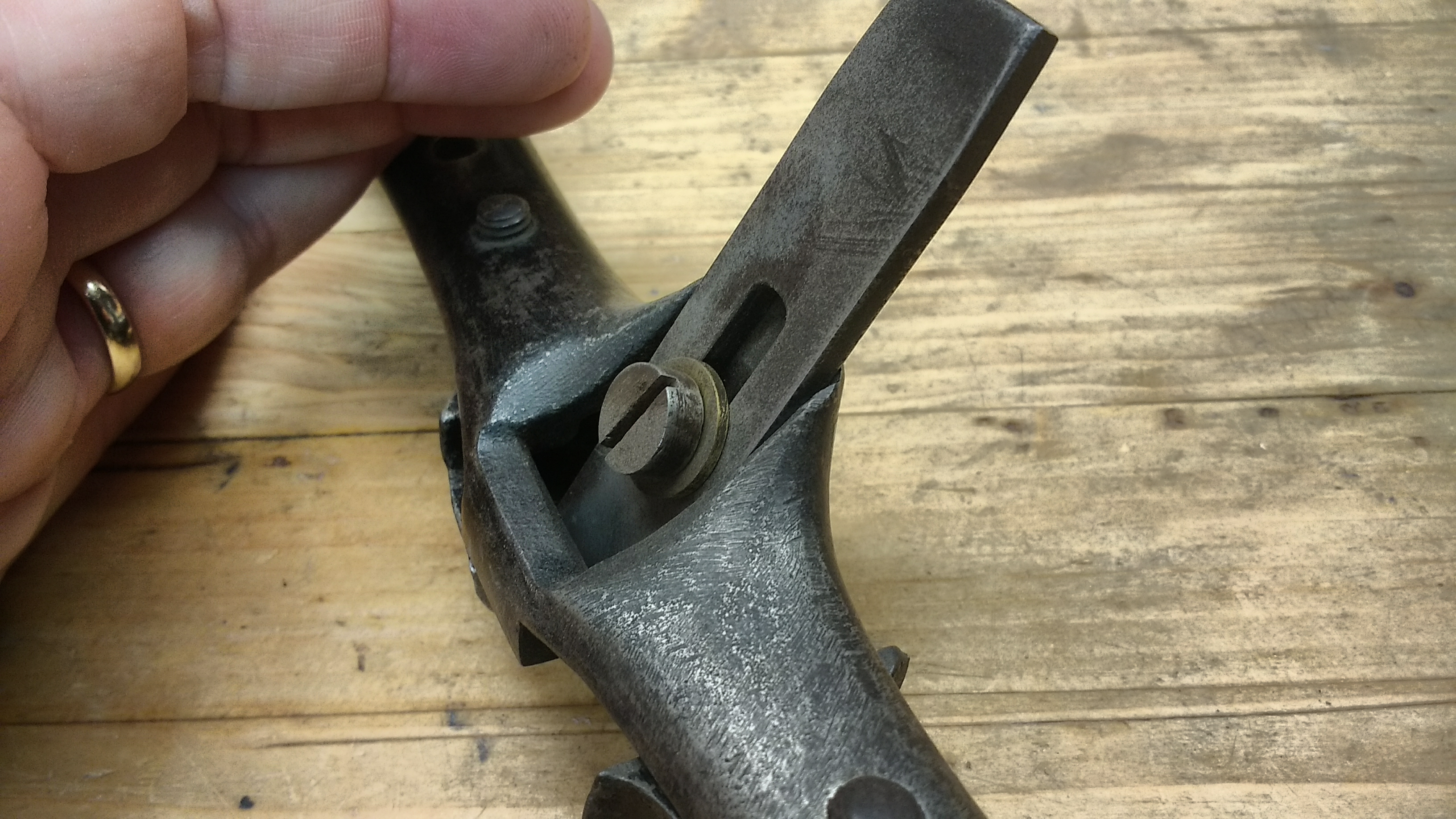 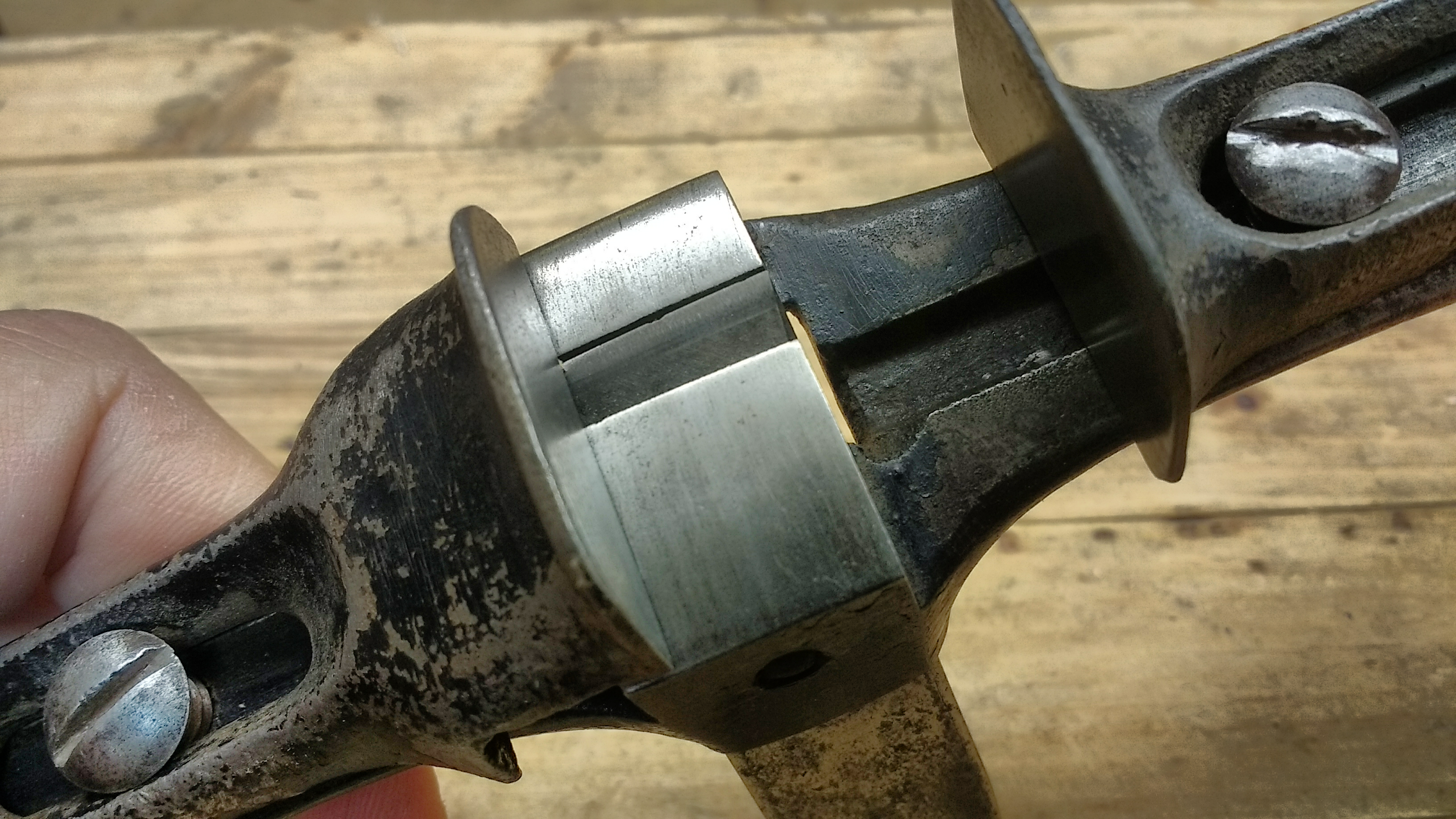 The point of having the sole so short is that it would have been used to make glazing rebates on curved windows - fanlights, fancy work in pubs or hotels, that sort of thing. For the moulding on the other side, you use whichever style of moulding you like on one of these. It has a pair of cutters so you can always cut downhill on a curve. 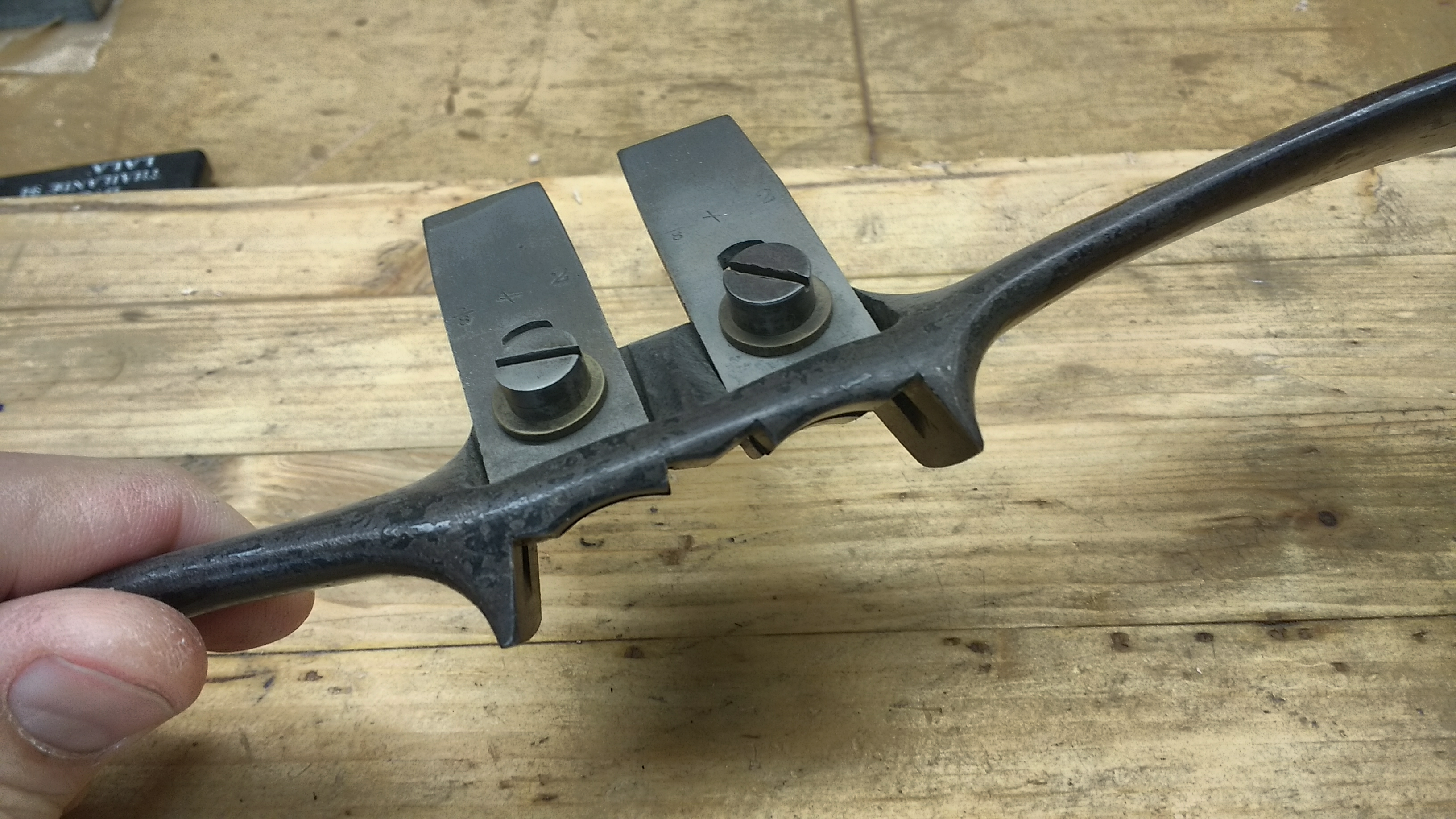 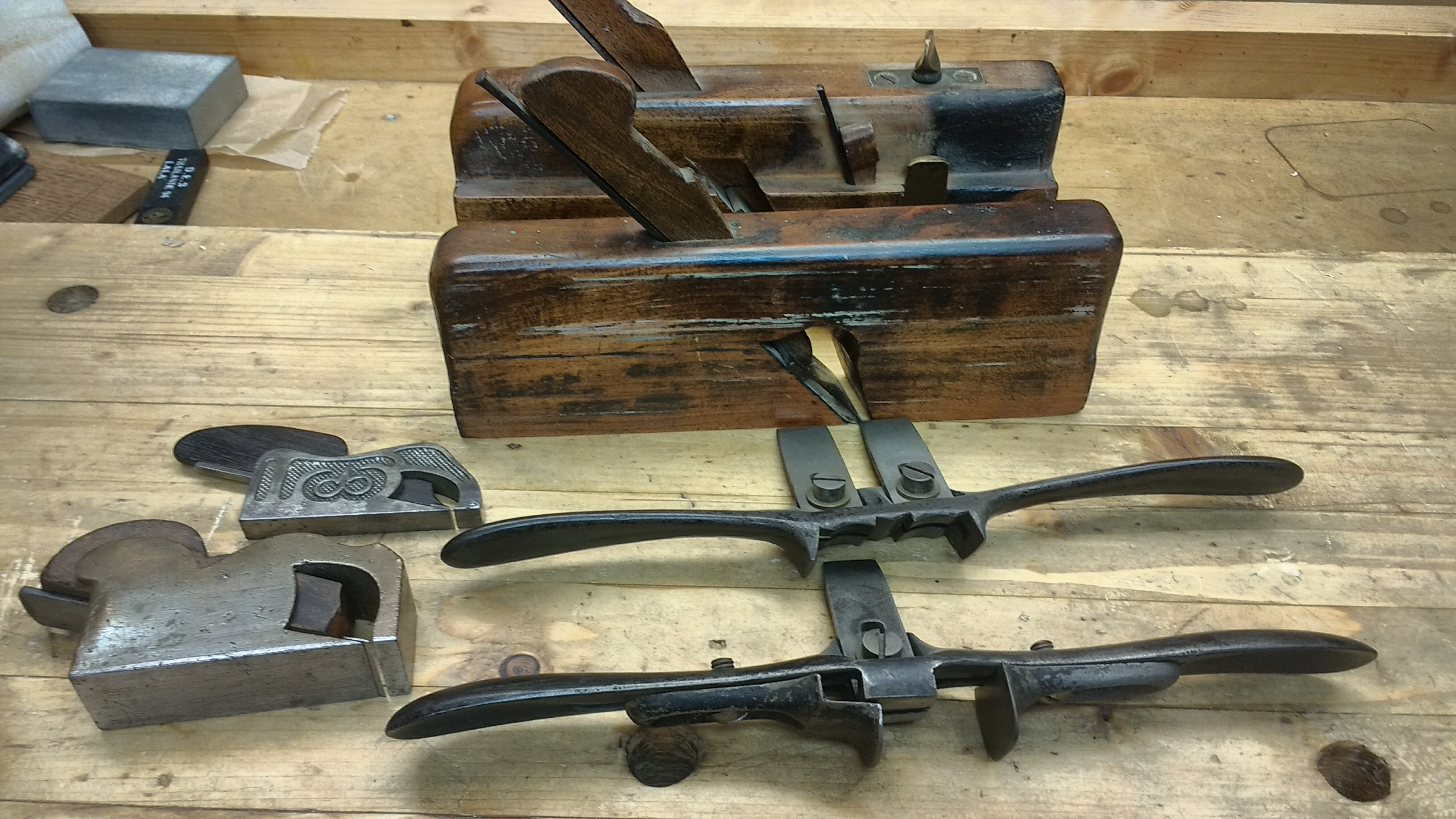 Other rebating tools are available, but I hope that helps for now.
A

Just to emphasise that size is not at all important......
I have a few of the items listed by Andy, except some of the Prestons, and use them regularly.

However I also have - and use regularly - a long rebate made by Mujingfang.
It is 15 inches, nose to heel and 3/4 inch wide at the throat.
Why that long? I picked it up with some other excellent Mujings about 15 or 20 years ago. I cut rebates in long boards in the normal way, and finish the refining of long side rebates with it, both longitudinally and use it for the final cuts, getting the right-angle just right. 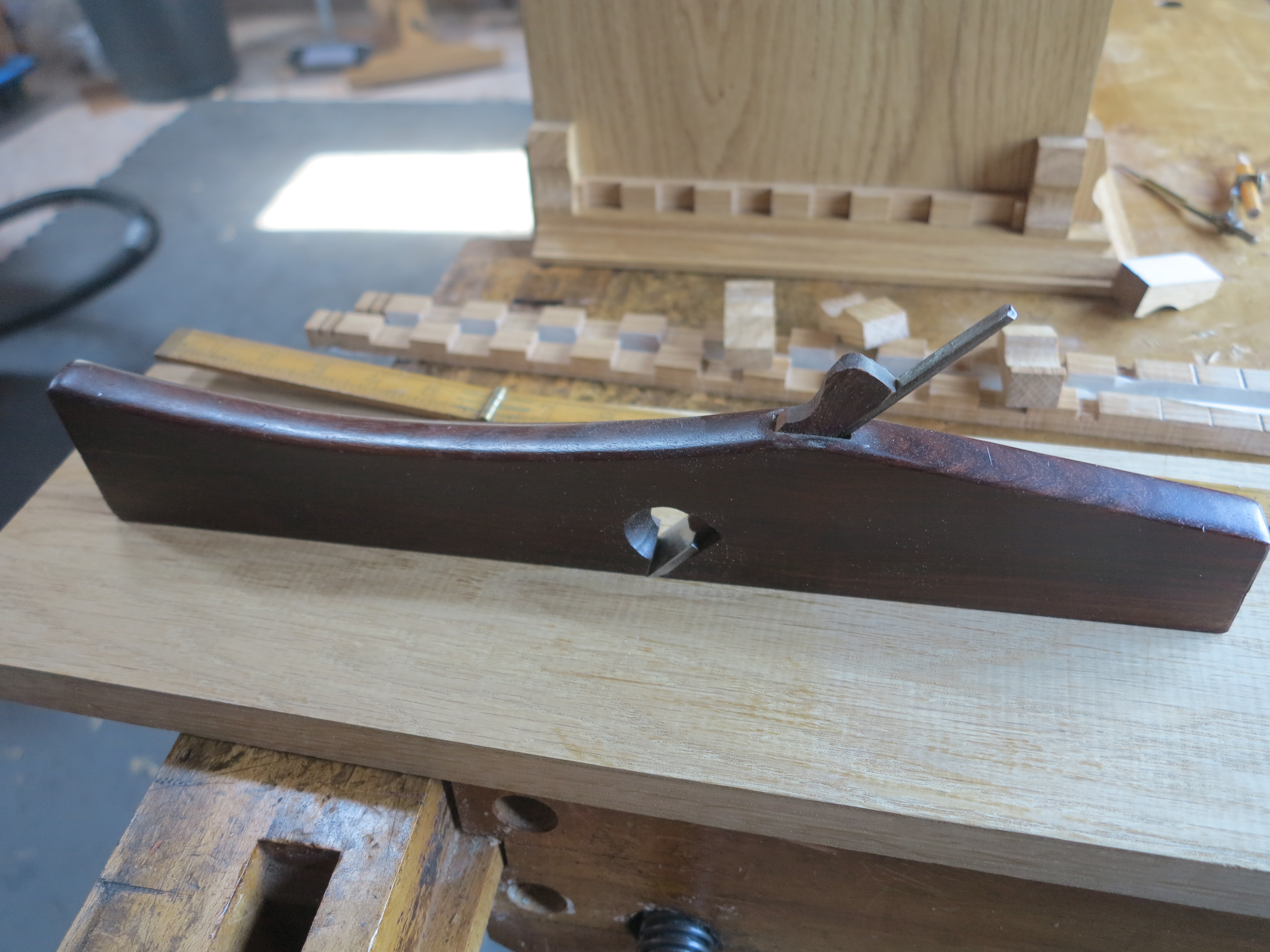 This particular long rebate also has a tight gap at the mouth and when set up will produce a beautiful, precise and long shaving over many feet of board.

I am impressed so far with the quality of this maker. The other Mujingfangs that I have are a graduated set of so-called 'Hong Kong' planes (dunno why they are called that) which have a single-piece iron bedded at 60 degrees - half-pitch, I believe - with excellent brassed and tight mouths. Very well-made, these are my go-to planes for attacking awkward grain and are capable of removing a whisper on the most wavy stuff. I have never come across that pitch before in what are effectively small bench planes.


All best from Wales

Those spokeshaves are rather intriguing AndyT, may i ask who made them?

Droogs said:
Those spokeshaves are rather intriguing AndyT, may i ask who made them?
Click to expand...

There's no name on them. That pattern does appear in the 1909 Preston catalogue and also in 1920s catalogues from Melhuish or Tyzack. So I expect they could have been an OEM brand or just brand free.

Argus, that Mujingfang plane looks excellent. I've got one of their low smoothers - excellent quality and value for money.

Andy, that‘s quite a collection but I wouldn‘t have expected anything else!

What’s the view on things like the little Veritas skewed block plane which has a fence or the L-N equivalent? Has anybody tried one?
A

Andy,
In reply to what you have said about the long Mujingfang rebate plane, I now construct my mouldings in the style of Matthew Bickford's 'Mouldings in Practice', using hollows and rounds on pre-formed steps along a boards' length.

After constructing the basic shape with ploughs and other rebate planes, this plane now, I find, is perfect for finishing and aligning the resulting steps on long boards before I take a hollow or round plane to start the curves. It is very straight along the sole - came that way out of the box, requiring very little fettling - and leaves a good straight finish.

That style (the length) is not one that is found in English planes....... is it Continental? Oriental?

Also, I also thought that the Preston rebating shave you have was intended for refining the type of recess on the undersides of handrails. There must have been a fairly common use for them because they do appear from time to time for sale.

This topic can expand further and further - jack rebate planes, coachmaker's rebate, compassed rebates,etc - Whelan's book is an eye opener to the variety available and some of the different traditions around the world.
T

Andy's first Preston picture, is still available as a Clifton remake. I have one, and not used very often, but is just the ticket for getting into hard to reach spots.
You must log in or register to reply here.