Just thought I'd post a wee review on this budget Lidl arc welder I've had for the past month...
I bought this on a spur of the moment thing, as it only cost me 50 euro's, and it saved me slugging
an old tablesaw base to the metal shop.
I could not fit a bigger welder into the workshop, so this thing fitted the bill being the size of a car battery, it just about fits. 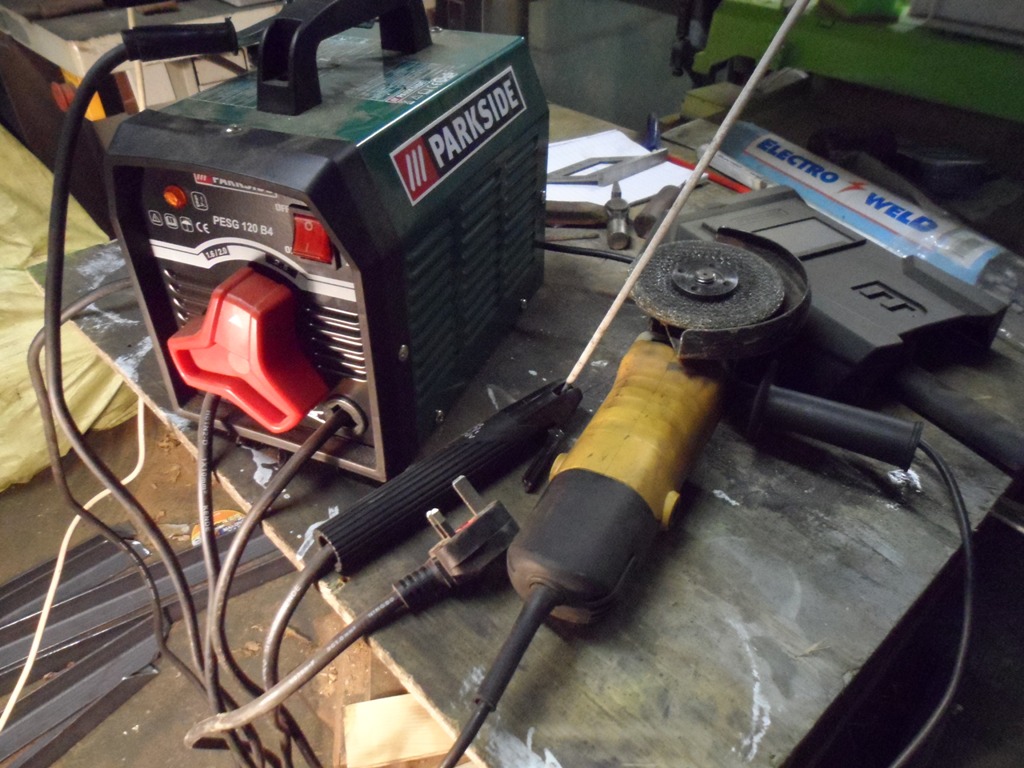 Storage-wise, it would be a boon if you could disconnect the wires from the welder, but I think I've just found a new spot now in the place anyways, under a chunky base for the pillar drill, which I've just completed.

Initial thoughts on this was quite impressive, as I welded up some wee brackets on the corners of this tablesaw base, the 2.5mm rods, which is the stated maximum for this machine worked nicely for this. 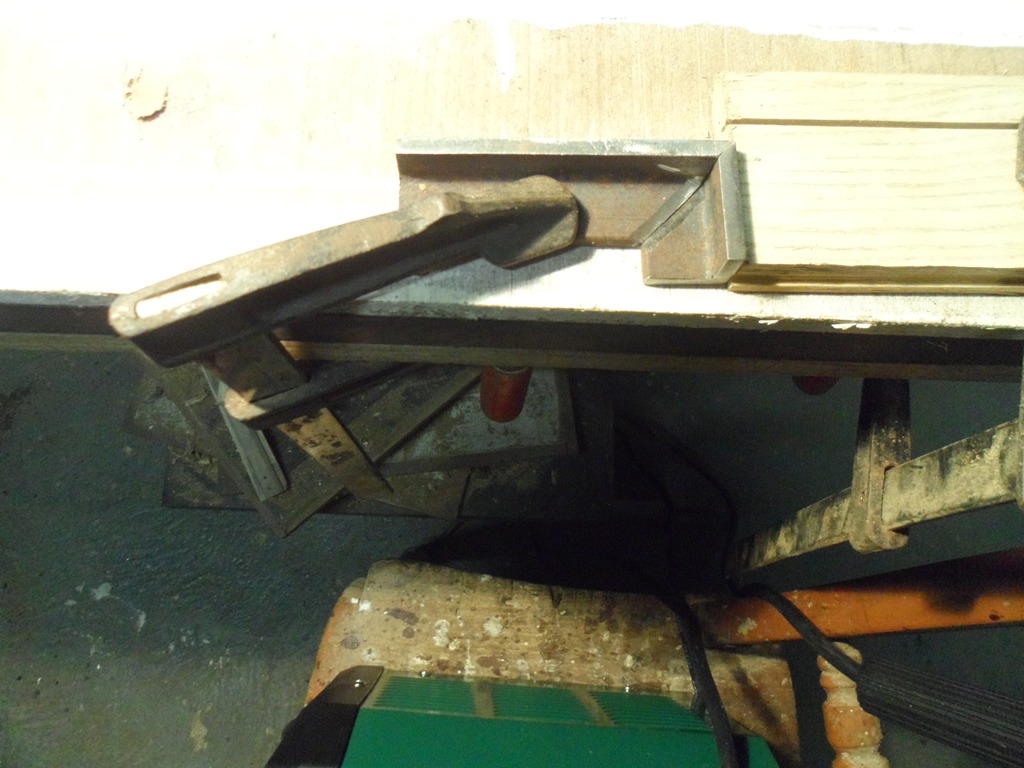 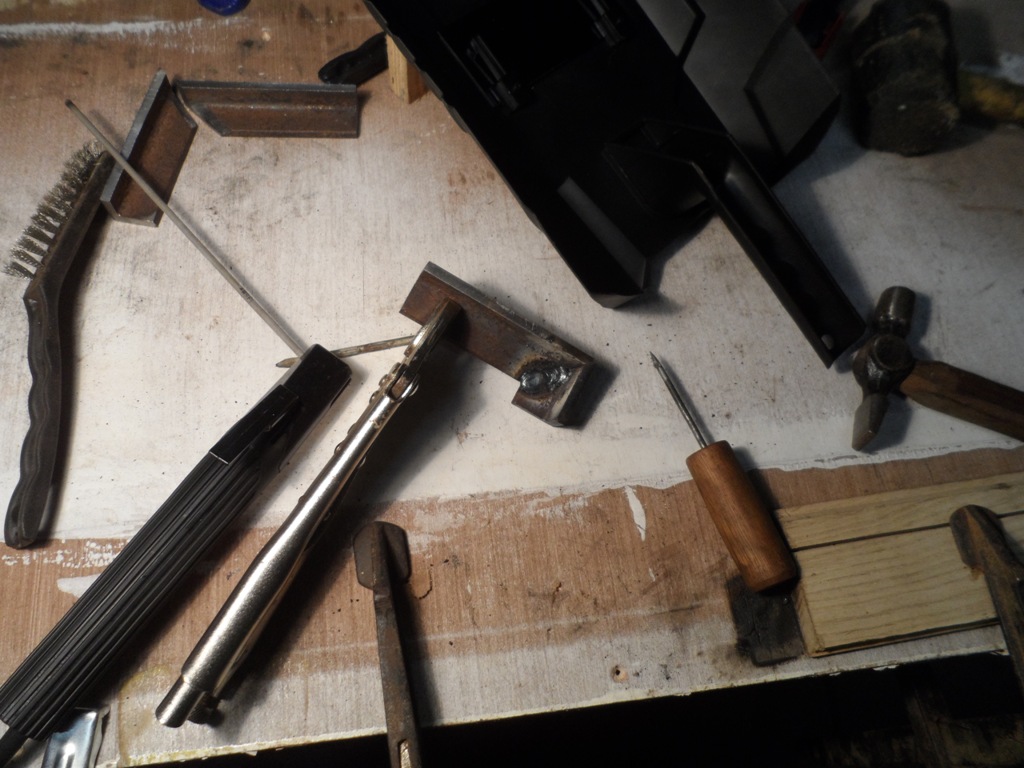 I realised I quickly had to put a plastic screen in front of the glass after this! (putting insulation tape around it on the inside the mask) 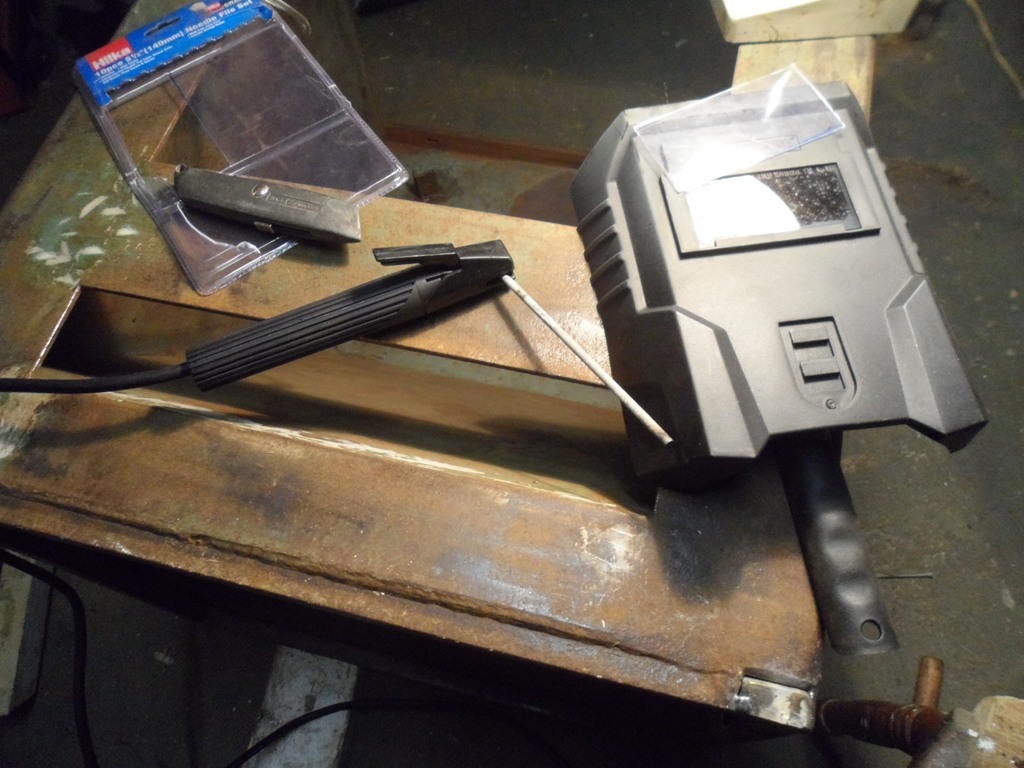 Switched to the damp 3.2mm rods which I use on the big welder, and these work fine aswell,
No special treatments for a good test, and I've been using the box of them since. 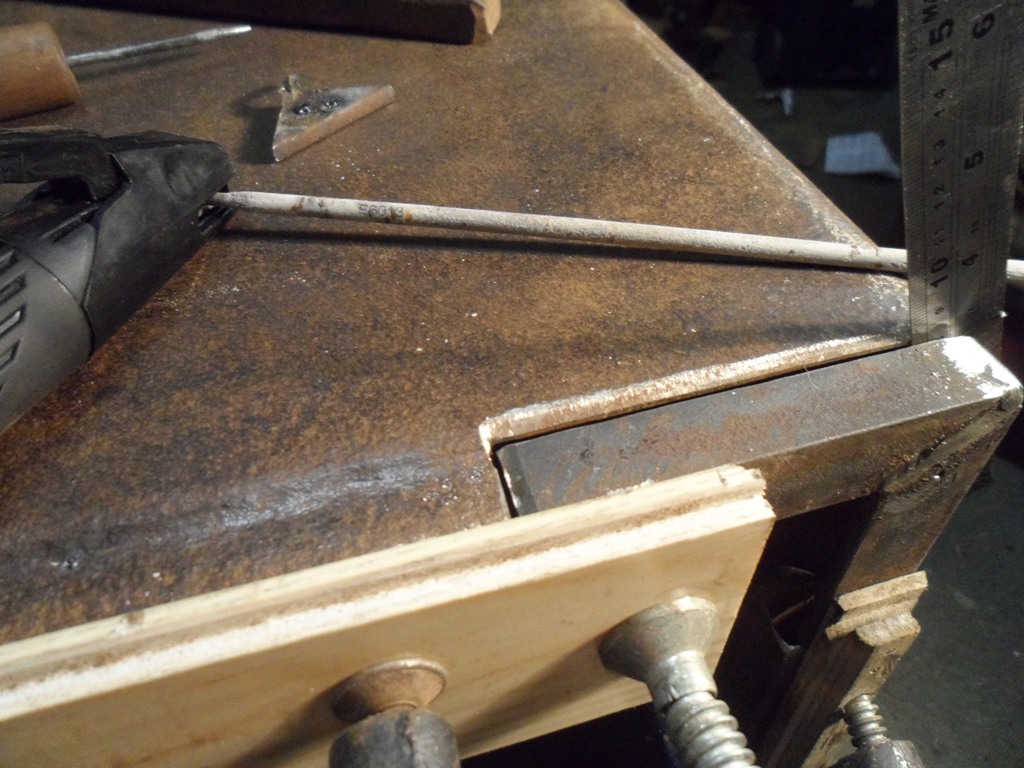 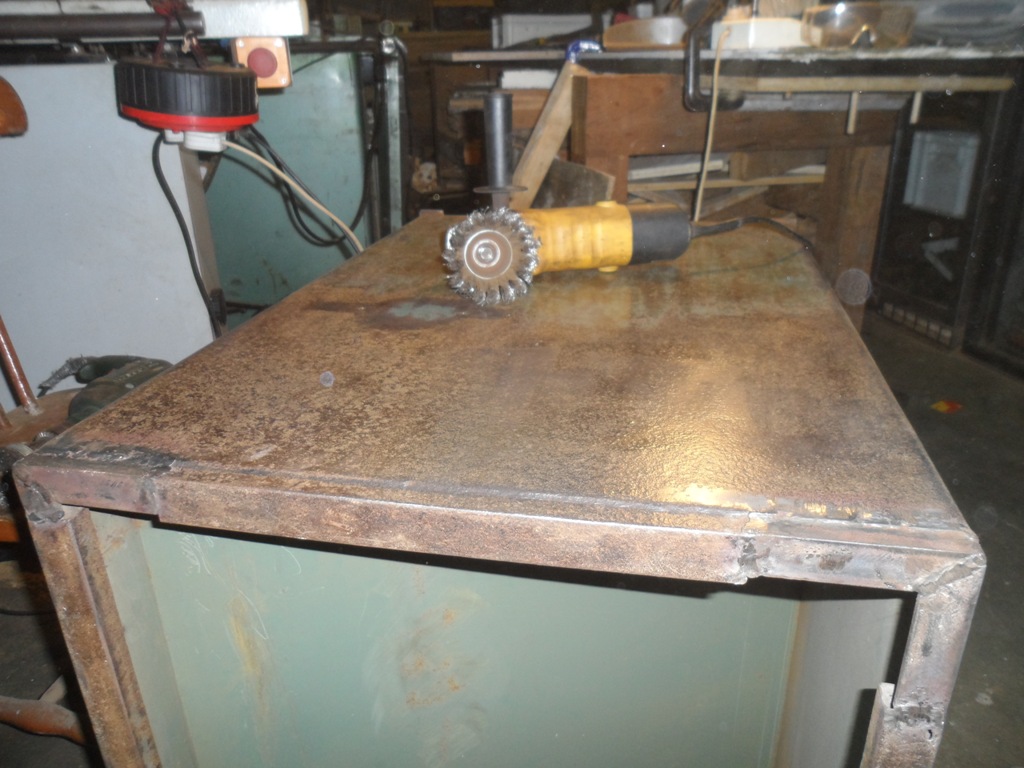 Things went really well for this kind of job, so eager to some more work with it, onto making a heavy duty base for the pillar drill, which was balancing on sticks.
Got me some angle iron 50x50x5 mm, at 6 meter lengths, for 32 euros, and some 2" pipe I have
for the legs.

This took me some time to make, as I could only do about 5 heavy beads, before this welders overheat protection light would kick in, and the thing would stop working for half an hour.
This machine does not have a cooling fan, like its larger counterparts have.
It doesn't help, not being that great at welding, not being prepared for creep in my cramped workshop, no proper table for clamping up, and having an ol mate in there too, made the hammer
square and angle grinder needing to be used quite a bit for the first step.
So you might forgive me for not showing too much of it

Here's a small example of the thing working well, it's strong enough to get a melt through
on this angle iron, which had a heavily chamfered underside and is just tacked.
I tried to get some pictures of the glow, but failed because my camera has a delay. 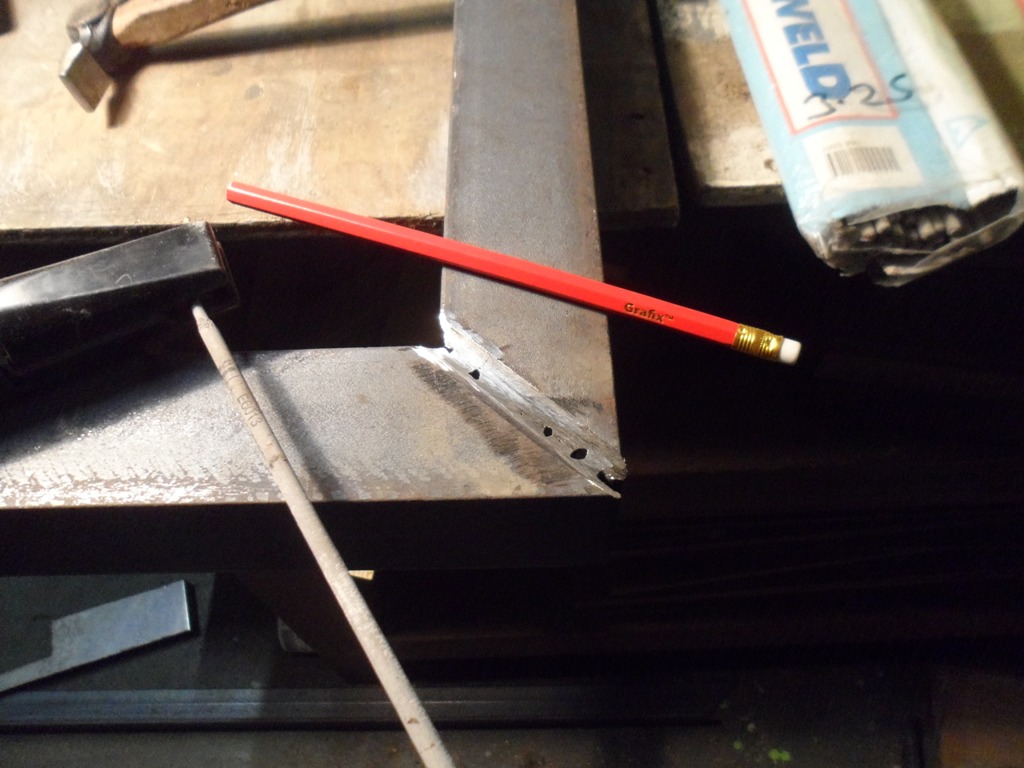 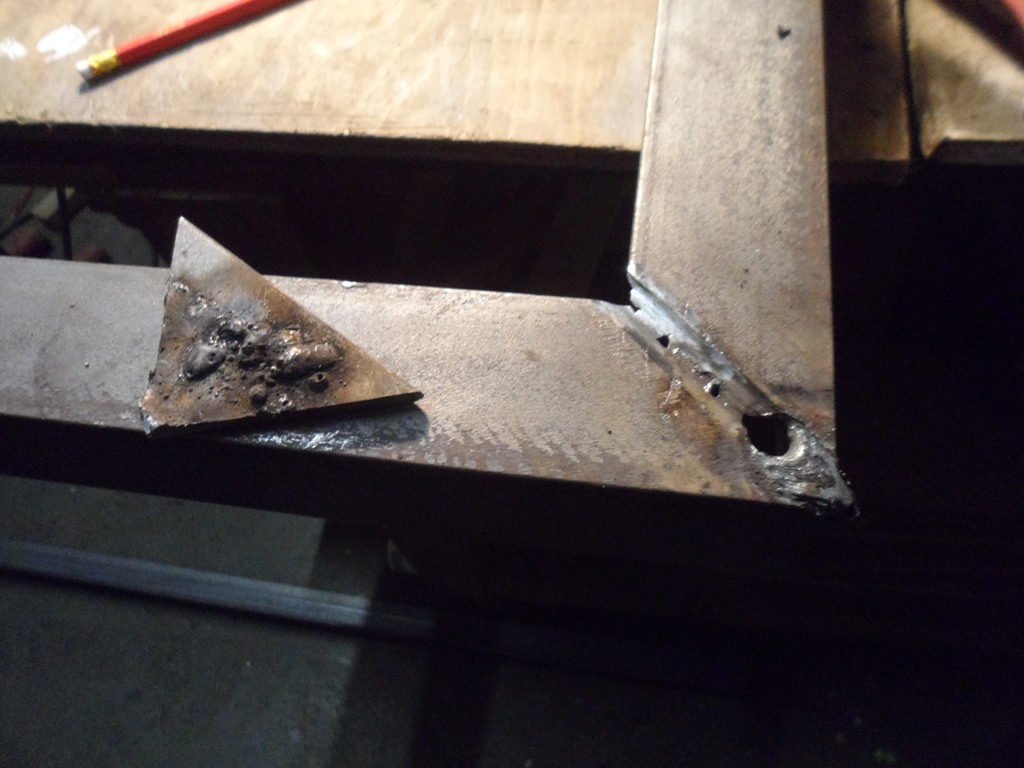 And some of the other end of the base 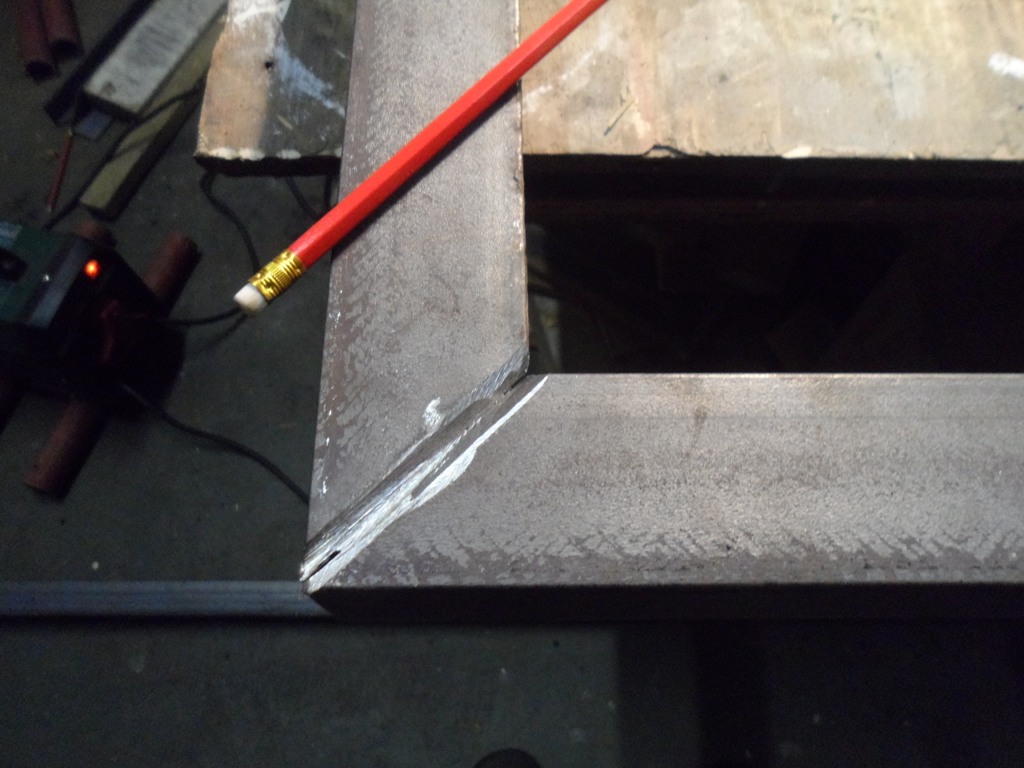 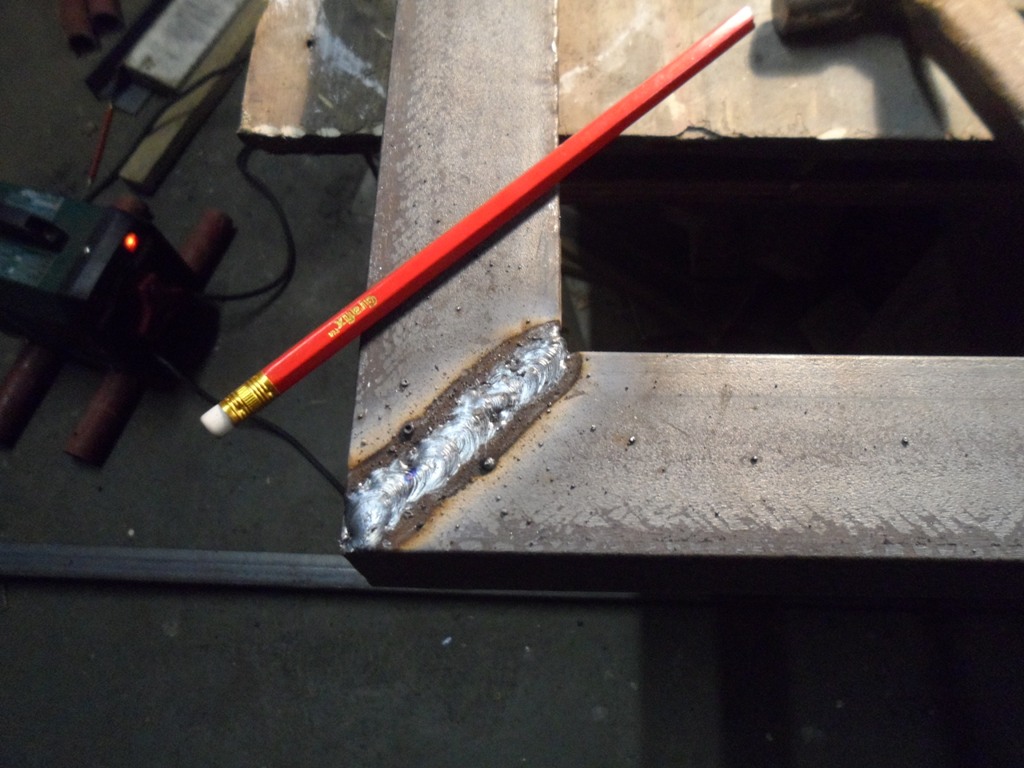 So all in all, it's not too bad of a machine, if you can spend three times as long welding up a project, waiting for the thing to cool between mini sessions.
It doesn't get quite hot enough to make huge spatter with the 3.2mm rods, like the ol man welds, but I never end up getting things that hot anyway.
I will say its making me think a bit more on efficient use of the welder though, so I can't say I've any regrets on buying the machine.
Thanks for reading
Tom

Interesting, thanks for reviewing it, I'd been wondering about the duty cycle of those and what you say pretty much is what I expected.

great for a quick weld up of something like a broken gate.

you can buy and retro fit connectors so you can remove the cables, dinse plugs. cheap as chips too. does mean modifying the machine, so no more warranty though.

I have a similarly priced SIP welder that behaves in much the same way. The case is bigger and largely empty space, if I used it a lot I'd consider shoe-horning a couple of fans in there - I think there's room and at least it would reduce the cooling off period. Mine was supposed to be ok with 3.2 rods, but works much better and for longer between tripping out with 2.5.

Thanks.
That's the kind of review that we, who are bodgers, need.

No problem Robbo3
Had to have something to do, while I waited for the thing to cool down.
I was thinking it might be of interest to some on the fence, about investing a lot of money into this venture.
It need not cost a lot of dough for a valuable asset to the workshop.

Can't wait to put this to more use, as its enabling me to utilize more area in my workshop, my drill bench is getting a shelf for my general tools, I can do some reorganising in here soon for that.
I will definitely be making another mobile base for the tablesaw and some other projects come winter.