I recently acquired this bronze plane at an antiques centre oop north, perhaps polished a bit too much but at least it hadnt been subjected to the wire brush & angle grinder treatment like a Spiers that was in the next bay!
Got it for what i thought was a reasonable price after knocking the guy down a bit.
No makers name or identifying marks, wood infill is rather battered but doesnt appear to have been restored much.
Overall length 15" by 3" wide
Interesting cut outs on the frog may hold the key to who made it?
Any ideas as to maker welcomed! 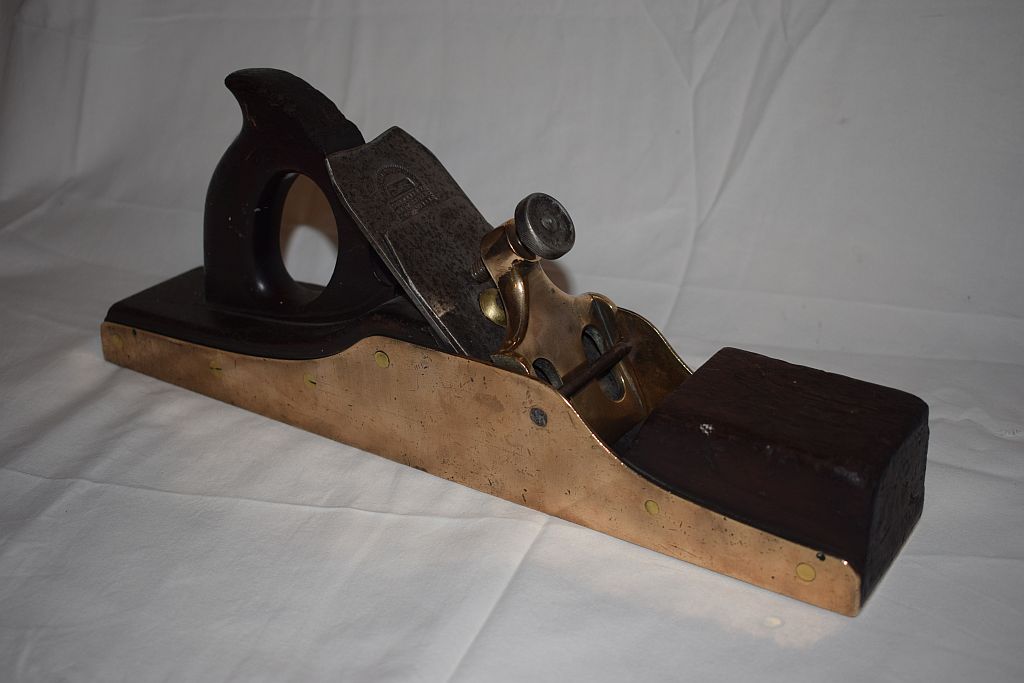 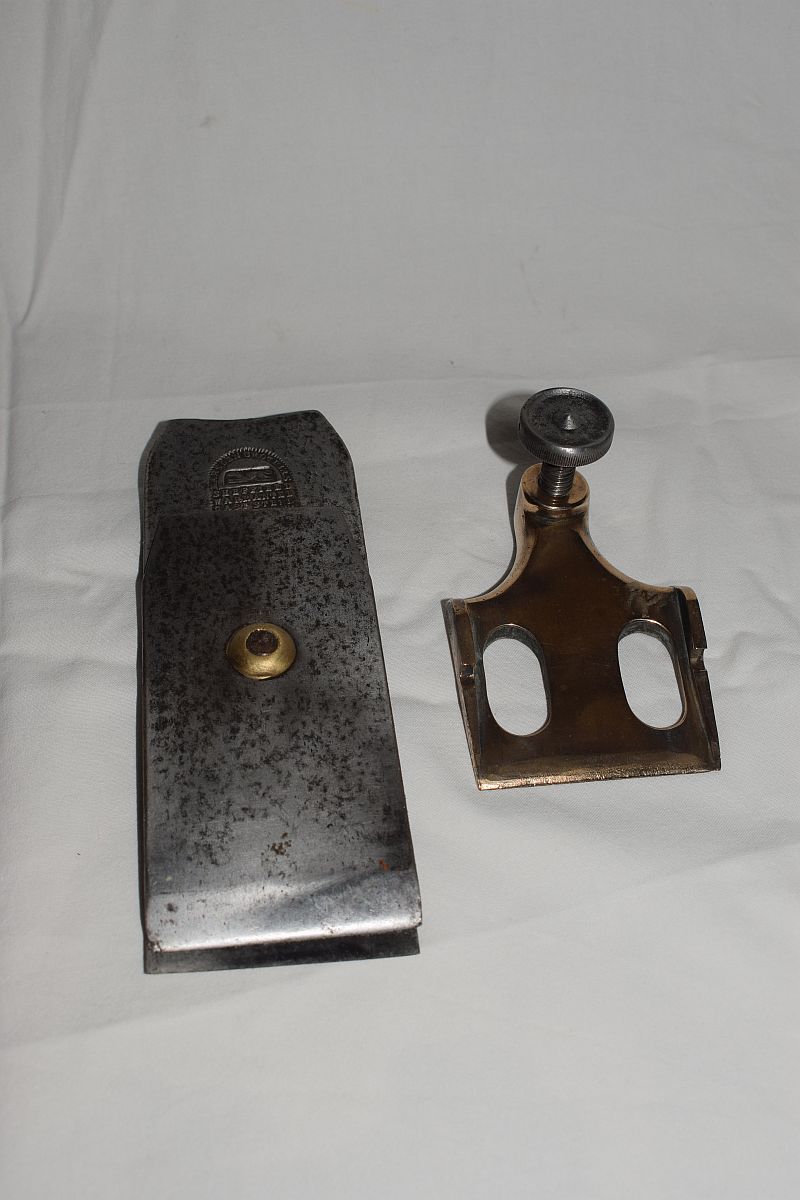 If there's no evidence of a maker's mark anywhere (on the screw cap is the usual first place to look) then there's a fair chance it's user-made.

It's maybe not quite as pretty as some of the products of the well-known makers, but it nonetheless looks competently done. The wear to the iron suggests it's done a fair bit of work, which also suggests a good user plane.

Maybe not quite up there in the glamour stakes with Spiers or Norris, but I suspect that as a user it could turn out to be a very good buy indeed!
K

You may well be right, the casting is definately a bronze, probably gunmetal & is very finely done, would have been a lot of work for a user to make though, could have been an apprentice piece? Going to sharpen it up & see how it works!
S

Doubt it's an apprentice piece. Similar although not identical pieces are everywhere. I've got a bull nose casting that's never had the mouth opened and a bronze Woden drill vice. At one time there would be loads of businesses around the country that had the own foundry and it seems that both workers at those companies and people you drank with would ask the foundry workers to cast tools either from patterns or from an existing tool for the cost of a pint or two.
D

Yes-- good reply.
I fancied brass/bronze bodied tools (why not?) and finished up with a couple that were pretty definitely cast using a commercial cast iron tool body as the pattern - ie same details and makers name still just visible, but at a lower definition. Most brass and bronze alloys (there are many) are easier to cast on a small scale (lower melting point, metal flows better etc) and although the metal is more expensive, not difficult to get some scrap to melt for a few parts.
Not that there weren't commercial tool makers using these alloys, (and still are, eg LN).
D

This vice from a current on-line sale looks quite carefully made except for the front-jaw 'Woden' casting which I'm guessing was cast in aluminium or a zinc alloy using a genuine Woden as pattern?

Your plane is of course cast (or could even have been machined from some solid stock) to a much higher standard.
Danny

Keith 66":1478bswb said:
You may well be right, the casting is definately a bronze, probably gunmetal & is very finely done, would have been a lot of work for a user to make though, could have been an apprentice piece? Going to sharpen it up & see how it works!
Click to expand...

It's user made, in the proportions of a norris no 13. Keeping in mind there weren't a lot of hobbyist users when that was probably made, and it may have been made from a pattern.

While it may seem like it's a lot of work to make a plane like that, I've made several dovetailed planes, including from scratch, and the cost in earnings to buy something like a norris 13 would've been a lot higher than a skilled user's labor, even if some of the metal parts came from a fab shop somewhere.

To make something like that plane completely without power other than to drill the mouth and drill the holes for cross pins and the pin for the lever cap would take me about 70 hours (dovetailed, filed and then scraped and lapped). But it's a lifetime tool when you're done.

I actually have a norris 13 about that size, but only because I would also like to copy it at some point (not afraid to copy a casted plane with dovetails, as I have no machine tools and won't be doing castings), but I have to say that the best working infill plane that I've had in panel size (above and beyond norris/buck marked norris/spiers) is a user made from mail order parts panel plane made in england. Whatever it is about it, the orientation of the handle and its balance is better than any other infill plane I've had. It was made with care by a luthier, but cost me the princely sum of 165 pounds (some here might balk at that, but I consider it a steal - it would cost the same to me just to buy the materials).
E

dannyr":8ff6j70a said:
This vice from a current on-line sale looks quite carefully made except for the front-jaw 'Woden' casting which I'm guessing was cast in aluminium or a zinc alloy using a genuine Woden as pattern?
Click to expand...

I think that's very likely a factory piece despite how ropey the casting looks.

This is a later Woden, when standards were not being kept up. Not the best start but even before such a period of decline the occasional ugly duckling made it through the QC of many a well-regarded brand. For a previous thread where casting quality (or lack thereof!) was being discussed I collected various pics of vices showing casting details that really don't look acceptable but yet were from companies generally known, even celebrated, for their high quality including Chas Parker, Record, Woden, Athol and Columbian.
D

Always difficult to see in a photo - but do you suggest this is cast iron? Looks like light alloy to me, but could I suppose be the lighting, colour balance and highly buffed cast iron, I suppose - I'm not going to buy the vice to find out.
Yes casting quality can vary a lot - at the other end, all the Parkinson vices I've seen have been pretty good castings, but about the best was a dead ringer for an old Parkinson's Perfect but with no brand name - I bought it (for 'next to nowt').
danny

Although far from conclusive, may I refer you to the gun-metal planes of Edward Preston circa 1890 (ref AWTools David Russell p308) for a similar method (but not design) of pierced and notched lever cap behind bar. Also they just happen to have a sloping into the mouth on the front bun.
Cheers Andy
You must log in or register to reply here.
Share:
Facebook Twitter Reddit Pinterest Tumblr WhatsApp Email Link