Spotted on the Ax site, a couple of new BC planes . I can't decide whether I like them, a complete waste of time (and money) or something new and innovative. Views; yay or nae?

am I right in noticing that this doesn't even have a cap iron? :shock: this certaintly makes a veritas custom plane seem cheap

Are there any deficiencies in existing designs of plane that stop people getting wood flat and correctly sized, and are addressed by these designs?

Are there any problems with current methods of plane manufacturing which Bridge City have improved on?

Are these planes quicker to adjust, sharpen and use?

As far as I can judge from the pictures, the answers are all No.

So (even at the risk of spoiling things for whoever has drawn me in the Secret Santa :wink: ) I don't want one.

Surely, everyone knows that "less is more" (expensive) :roll:
D

Presumably, these are for collectors. The design doesn't suggest much about the designer being a serious plane user, though I'd bet it takes decent smoother shavings.

Is it a better plane than a decent used stanley or record? Very unlikely. Is it as good in the hands of a familiar user? Probably not.

Does it have a boyhood multi-function cap pistol swiss army knife collector gadget factor in spades? I think so.
D

I took a fascination with pencil making lately. I thought that there probably weren't many people out there who had or would like to make pencils entirely by hand (after all, it's unlikely that you can take 50 cents worth of materials and make a better pencil than a tombow mono).

I was semi-surprised to find that one fellow put up a crowd funding video and made a gadget allowing an unskilled user to make pencils mostly with a block plane (tearout and all).

And then someone pointed me a couple of days ago to an upcoming BCTW product. (EDIT - currently in production doesn't mean that it'll be ready soon, it means that it's available.)

I spent about...$0 so far in coming up with a method to make pencils. Perhaps 20 cents if you count mapp gas to make a specialized beader to cut the channel for the pencil lead.

That aside, I've been a little bit surprised at the gadgetry offered, but still also surprised that nobody has posted efforts to make a decent pencil without buying anything or using power tools.

I expect hobbyists with money would enjoy owning that. If I was a multi-millionaire, I'd probably get it. Why not...

I find they're just a bit ugly - possibly because its just CNC made parts. If I had silly money to throw at a plane that was functional and beautiful I'd be talking to Bill Carter or Ollie Sparks - something handcrafted that looks like a proper piece of art.

304 Stainless and Aluminium! I can’t think of anyone who would knowing put those too metals would together without a proper barrier.
P

I would be interested if someone purchased them and did a review that justified the price.
Personally I dont think that Axminster do themselves any favors listing items like this as it could well put off the majority of people looking at the site just looking for usable tools from a trusted supplier at a reasonable price .

I think the consensus these days regarding Bridge City Tools is once upon a time they did make very excellent collectable tools, but they are now owned by Chinese firm Harvey Industries (Which make the Harvey tablesaws) as of last year. Harvey seemed to have pushed the BCT production towards larger batches of manufacture rather than the very short one-off runs they used to do where once something was gone, it was gone. I've definitely seen early Bridge City stuff go for several thousand pounds at auction as they were marketed more like woodworking collectables rather than actual working tools.

I think some of the nicest looking hand planes made today are made by The Lazarus Hand Plane Company. The designs possibly aren't to everyone tastes, a bit like art I suppose! $975 for anyone interested 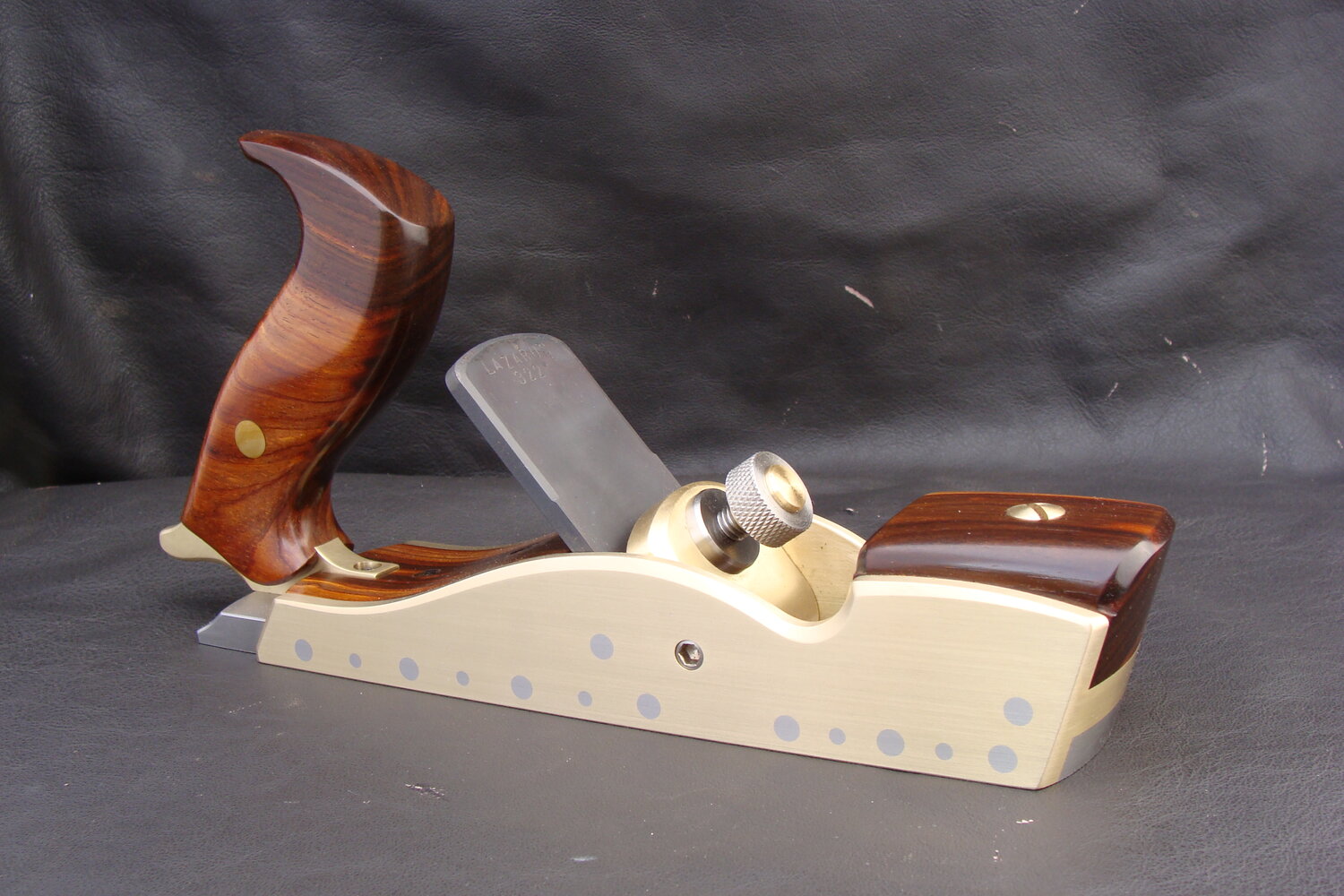 Didn't Bridge City market a device for making toothpicks or something a while back?
Chopsticks! That was it...

Toothpicks will probably be next year.
D

I can give you two sides to that (why list it?):

1) there is a small but very loyal following to bridge city. I'm in Pennsylvania. Not that many years ago, there was an estate sale for a gentleman a state over, and his collection ended up in the hands of a tool dealer online (thus we heard about this). He was not exceptionally wealthy, but comfortable and had two of every single item bridge city had ever made. At the very least, one went unused, and he may have used the second (but not in all cases - both were unused). He clearly wanted to try some of them but have one unused version of every single thing BCTW made. I'm sure his wife took a huge hit when a went through a dealer to be resold (common here for a dealer to offer a lump sum to a widow, one that the dealer fares well on - rarely anything close to what someone would get consigning).

2) BCTW is now owned by a Chinese owner (ethnicity not important, but more a matter of location - he's in China). Some of the tools are sold at two different price levels (one in markets like the US, and elsewhere in the world, like asia, for a much lower price. I recall there being a statement that the tools sold in the US were assembled here or at least inspected).

I'm guessing the new owner has lower overhead due to his location, and the distribution of the tools may end up in wider places, and maybe eventually, some for less money.

There are a lot of users here in the states who wouldn't buy the skeletonized stuff, but who may have purchased a couple of backsaws or squares, etc. Not uncommon to see them come up on the vintage tool auction sites here.

Last - if you were new to the hobby, you have no clue at that point what works well and what doesn't. the absolute genius of the stanley design is that it doesn't have to be made perfectly to work very near perfectly. That kind of thing is lost on John E and others who believe precision in making is more valuable, perhaps, or more impressive than the outright absolute genius of someone like leonard bailey. I have an English buddy who emigrated to the US, and who is an engineering manager (trained as a mechanical engineer). He cares little about nuance and classical design and is easily swayed by advertisements of accuracy and modernism in hand tools. He also doesn't use hand tools much, and thus makes an ideal customer. If he buys an $1100 plane (presumably yielding at least $250 to the retailer), he is certainly more valuable to a retailer than I am.
D

Trevanion":dm43vxwj said:
I think the consensus these days regarding Bridge City Tools is once upon a time they did make very excellent collectable tools, but they are now owned by Chinese firm Harvey Industries (Which make the Harvey tablesaws) as of last year. Harvey seemed to have pushed the BCT production towards larger batches of manufacture rather than the very short one-off runs they used to do where once something was gone, it was gone. I've definitely seen early Bridge City stuff go for several thousand pounds at auction as they were marketed more like woodworking collectables rather than actual working tools.

I think some of the nicest looking hand planes made today are made by The Lazarus Hand Plane Company. The designs possibly aren't to everyone tastes, a bit like art I suppose! $975 for anyone interested

Maybe a fan can correct me if I'm wrong, but I remember that Harvey was already doing much of the grunt work in making the tools

Trevanion":31pg6rpp said:
.........I think some of the nicest looking hand planes made today are made by The Lazarus Hand Plane Company......
Click to expand...

$1800 for a jack plane, and you still have to tap it with a hammer to set the depth.

Trevanion":2zbmffuo said:
.........I think some of the nicest looking hand planes made today are made by The Lazarus Hand Plane Company......
Click to expand...

I said they looked nice I didn't say they were at all practical! :lol:

He/she? does have some neat looking adjusters on his/her? other planes though. 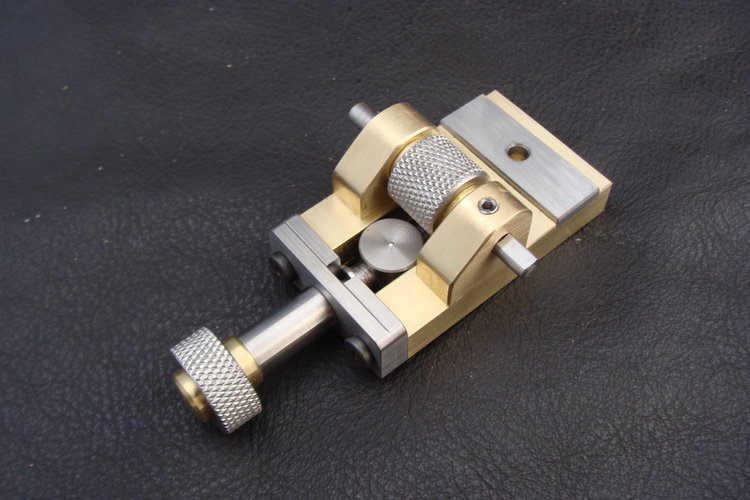 Ye gods. They are not even pretty.
C

For anyone for whom quality is paramount, and price is immaterial, the pinnacle is still Karl Holtey.

I'm all for pushing boundaries and creating something new but I don't like the look of the 2 Bridge City planes at all.
They just remind me to much of the mass production world. I do like the D-ring locking handles and cradle idea though.

Have to say I'm a big fan of Lazarus planes, he's taking a traditional tool, putting his modern twist to it and getting it spot on in my opinion.
If I could afford it I'd own several of his planes but at $1800 they are far out of reach for your average working man.