So, over the last 2 years the wife and I have been renovating our home, doing a thorough renovation, rewire / replumb and re-decorate.

We're now coming to the new furniture stage. I should point out now that over the last few years I've been an avid youtube follower, of various furniture / cabinet makers, including this parish's very own Peter Millard.
Well during those years gradually I have put together some tools and a ramshackle workshop (converted garage), and i've been itching to put it all to use. Therefore doesn't a house needing furniture and a man with the tools to build it make a perfect combination ?
Enter the wife into the equation.
Therefore before I am to be allowed to make anything significant (bathroom furniture, alove units) I am to be trialled with something more minor, in effect a job interview.

As a result - my challenge was to make a replacement bookcase for my daughter, which, if it was rubbish, was to be put in a corner where no visitors would get to see it (and have lots of things put on it in case they did get to see it).

So...how many mistakes can one man make, including his first ever use of a Festool domino ?

The design, I decided making two wouldn't take that much more than one 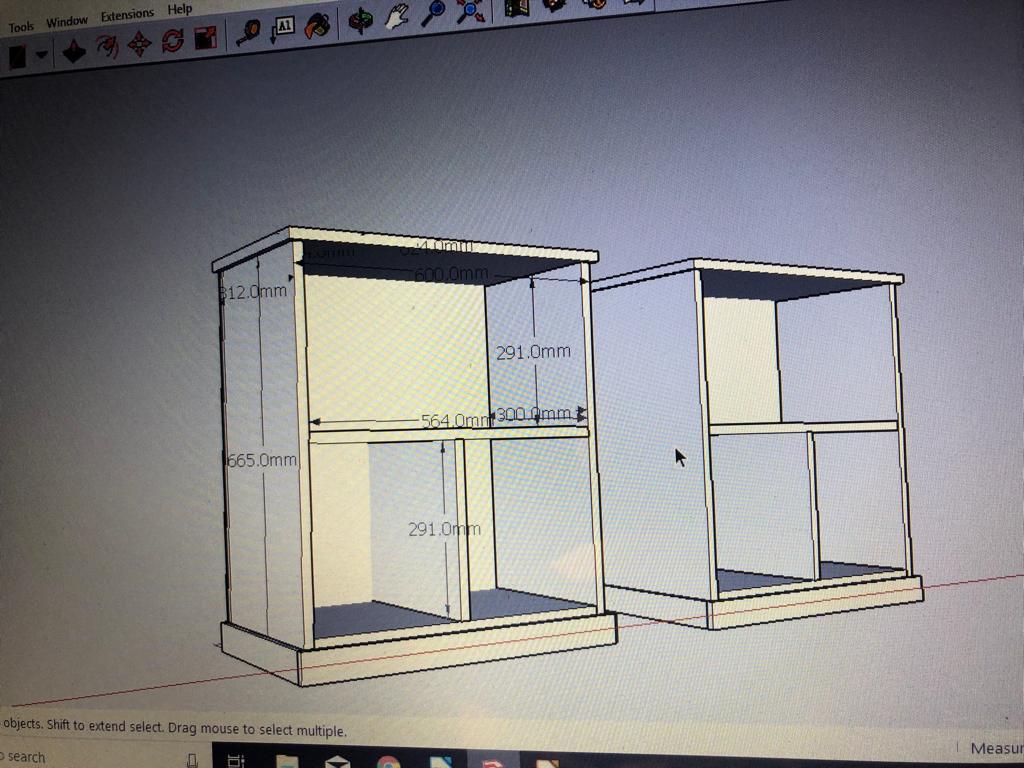 Mistake 1 - Domino's in the wrong place 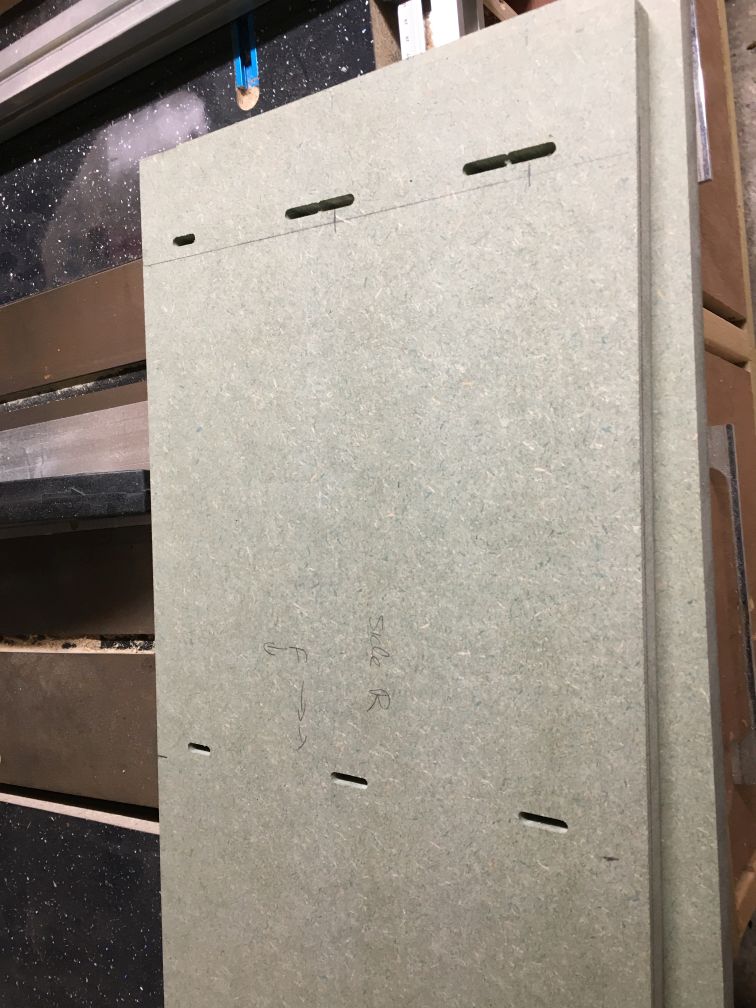 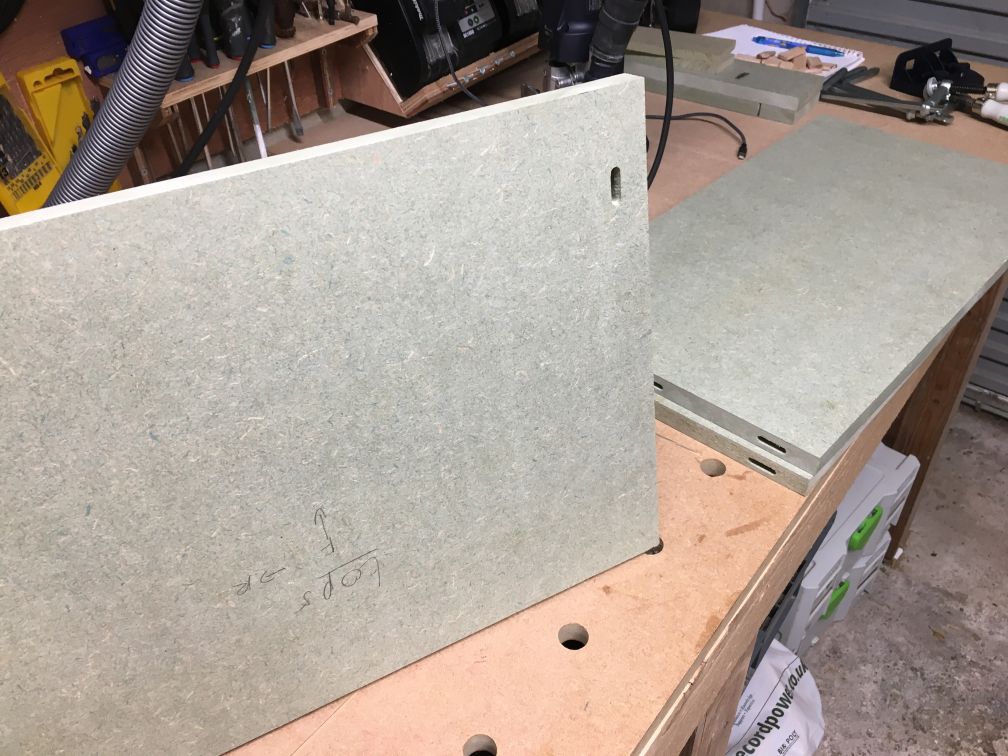 Mistake 3 - Domino's in the wrong place 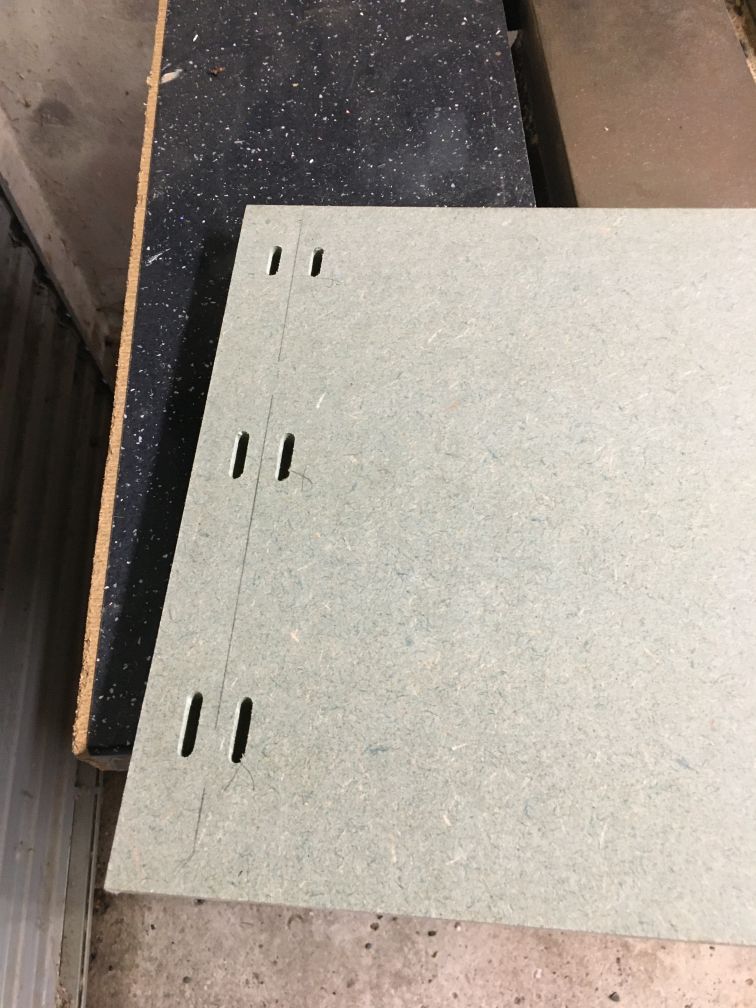 Mistake 4, drop a piece on its corner 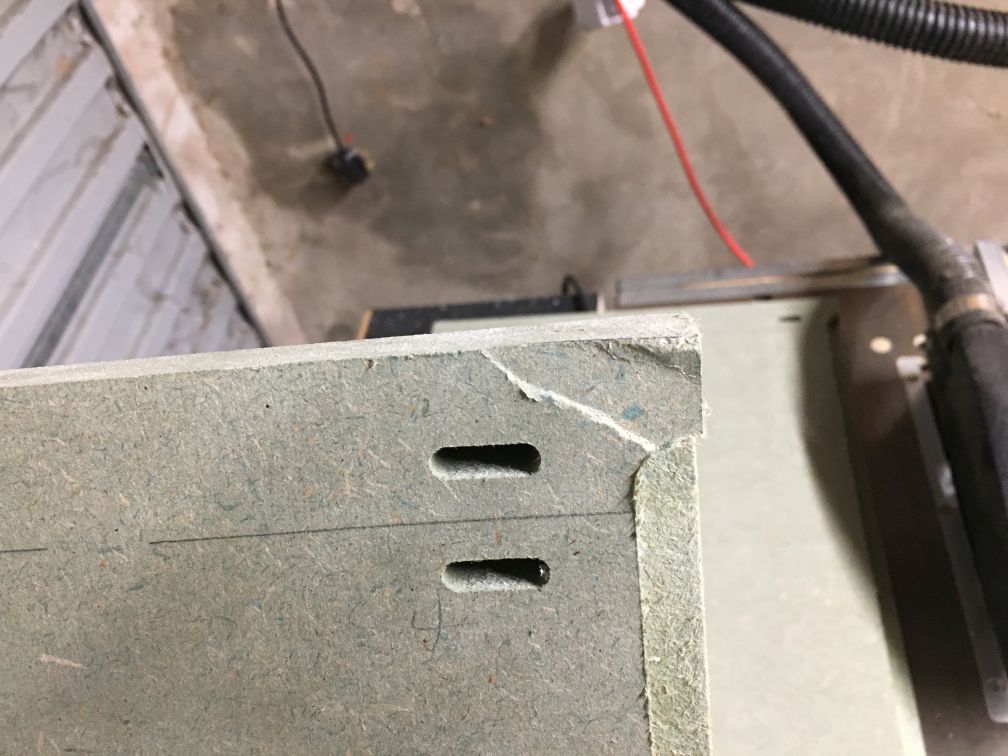 Finally something goes together 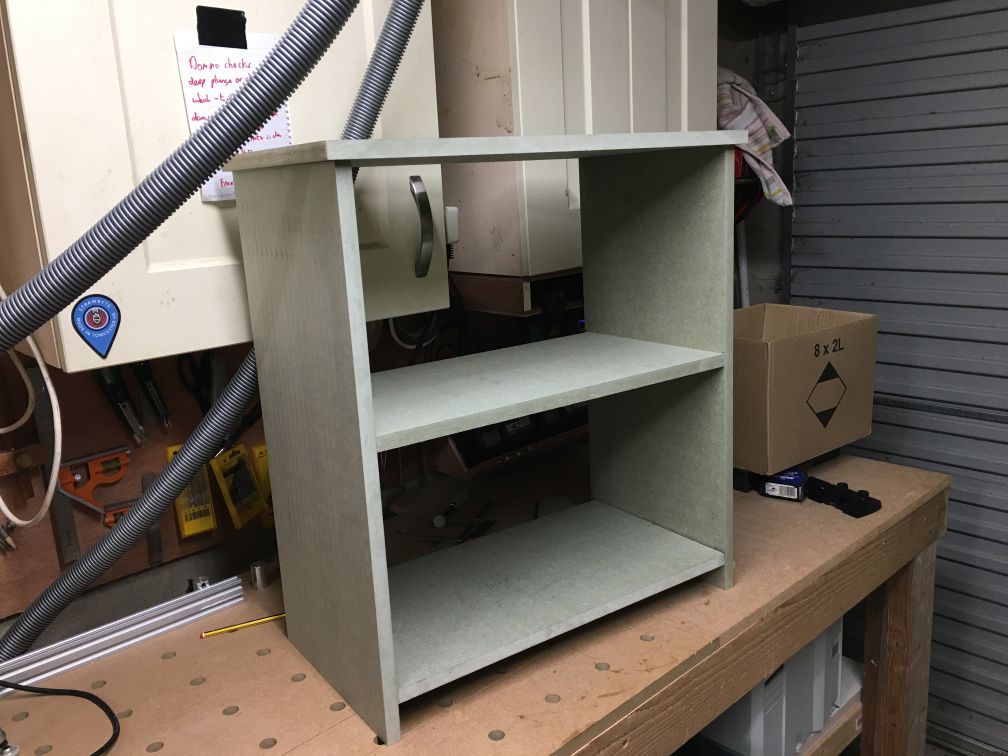 Inspired by Peter Millards excellent videos on spraying, i decided to invest 30 of my hard earned pounds in the Terratek spray system from Amazon 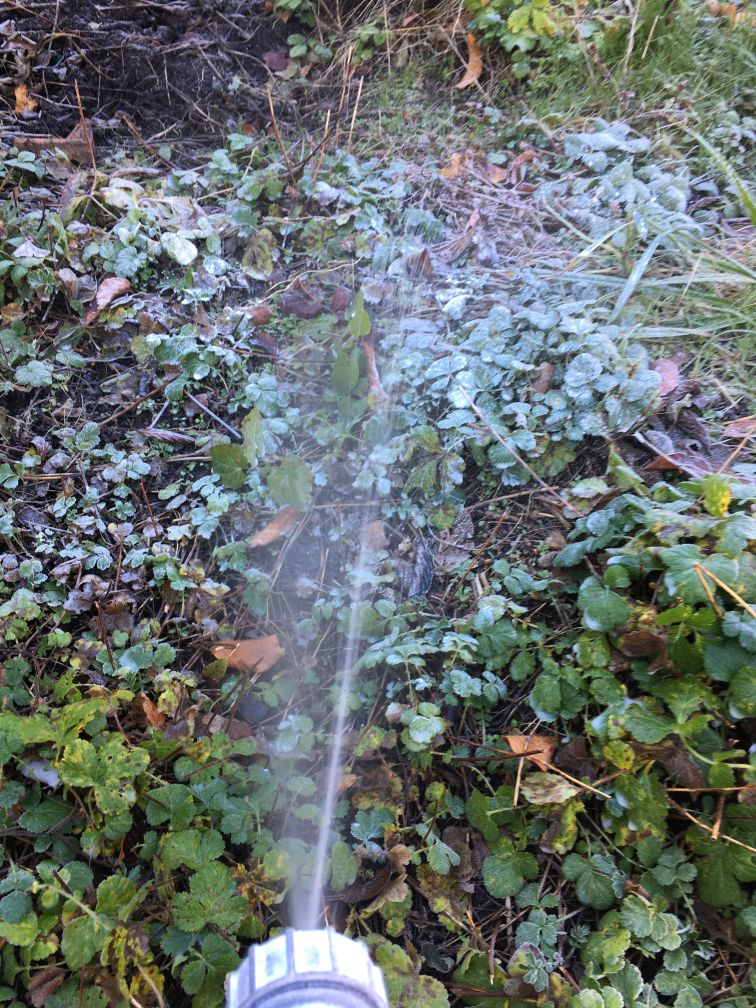 Mistake 5, so keen to make progress I rushed the paint thinning process, which resulted in the spray gun, jamming up after about a minutes use. I hadn't grasped that getting the thickness right was so important, with the poor spray resulting in a fair bit of remedial sanding. So be warned if you try spraying:
1. take your time with the thinning - get it right
2. try and spray for a couple of minutes without touching your piece, to make sure the paint is right!

Finally, after some more experimenting, and my wife's advice on what "looking like single cream consistency" actually looked like, spraying underway, and working well 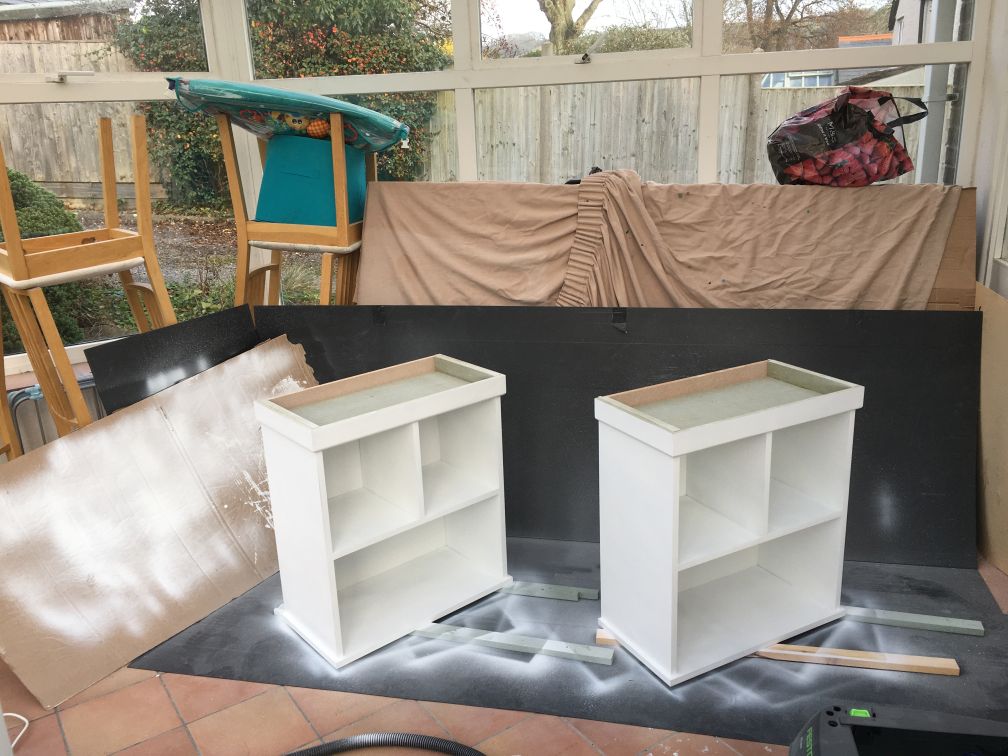 And the end result
View attachment 83050

Did I pass the job interview ? Well i've just been commissioned to build some built in cabinets for the bathroom, so it looks like it

Looks good Paul, certainly better than some of my first projects!

Don't worry about the mistakes, we all make them! Nothing a bit of filler and some sanding won't sort out!

Are you going to do another thread on your thoughts about the Terratec?

Of course, you didn't need a domino to build that - a few routed housings would have been fine - but it looks like a sensible training exercise with a useful product. And just getting it right first time would be no fun for the rest of us.

I hope you are getting CPD points and keeping your portfolio up to date!
L

So a bit of a review of the terratek spray gun... 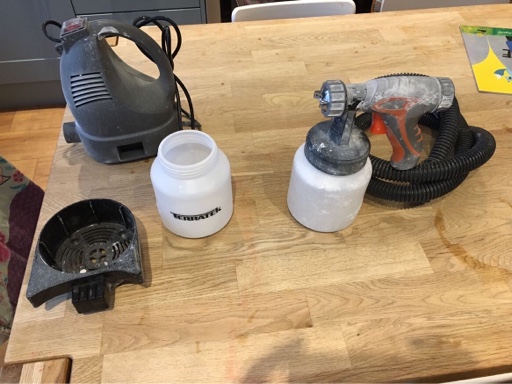 The power cable is stupidly short ( I plan to replace it) 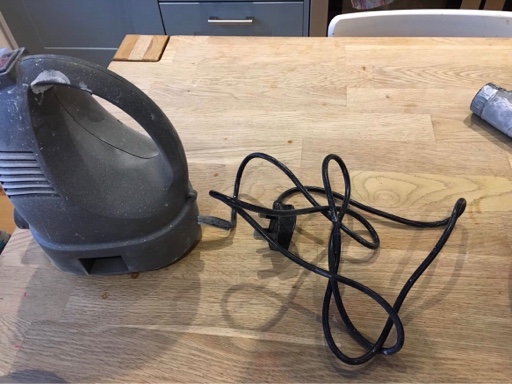 None of that really bothered me as peter m had warned in his videos, then I got to spraying

Well I ballsed this bit right up, rushed the mixing, thought it wouldn’t make much difference, so got to spraying the undercoat (Leyland acrylic undercoat)

First off my confidence grew quickly as the process seemed amazingly simple, until the spray turned to spit. Now I’d strained as per instructions but the consistency I’m sure was wrong (I used the viscosity cup that came with the kit, which from experience I now don’t trust. This photo shows the spray pattern getting screwed up by the gummed up nozzle 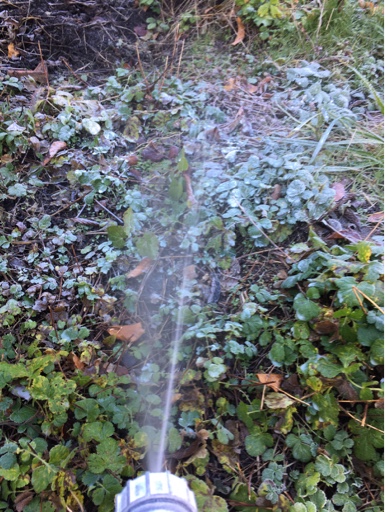 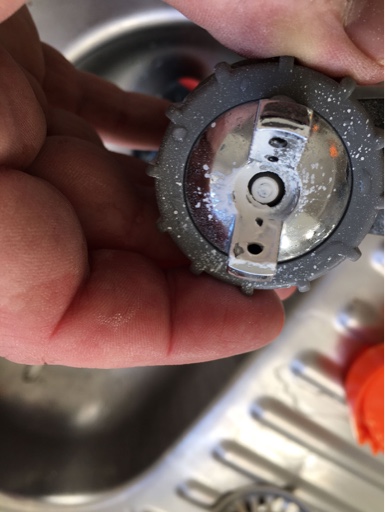 Cue a cry for help email to peter Millard, I had a lot of reticence about doing this as with tens of thousands of subscribers I’m sure he gets plenty of people asking for help when they can probably sort for themselves, but I was out of ideas. Huge credit to Peter for responding with advice and tips, which in effect boiled down to “thin it some more”, which I did

From then on the process was very straightforward and very satisfying. My opinion / tips of the Terratek?

Having two pots is great, as you can use once with water for rinsing the system, the other with your paint in you can cover the top with cling film and an elastic band to return to it the following day

As Peter demonstrates, if you’re stopping for an hour (to let the paint dry, which it seemingly does almost instantly due to the heat in the gun - another bonus) then stuffing the front of the nozzle with a baby wipe or damp cloth is great

Biggest tip? You need an area for spraying which isn’t needed for anything else in the meantime. I started with it setup in the garage which was a real pain, ended up moving it to the conservatory which was a game changer

Another tip, don’t start your spraying career when the outside temperature doesn’t rise above 10 degrees, unless you’re painting somewhere heated ! (Another reason the conservatory was a godsend)

Another tip, when you first use it find a big piece of cardboard to practice on, rather than your workpiece

Last tip, remember the spray can pickup pipe is angled, so if you plan on spraying downwards then twist it to the front (and vice verse) 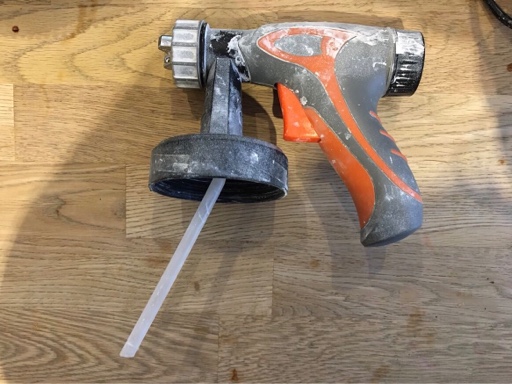 I’m very very happy with the finish as is the wife, so it must be good as she’s fussy 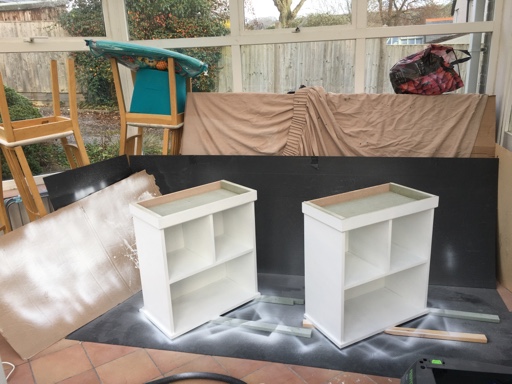 So would I recommend it ? Yes, but with the caveat that you need to be organised and disciplined, and practice !

AndyT":foz7578p said:
Of course, you didn't need a domino to build that - a few routed housings would have been fine - but it looks like a sensible training exercise with a useful product. And just getting it right first time would be no fun for the rest of us.

I hope you are getting CPD points and keeping your portfolio up to date!
Click to expand...

Yes could be done in many other ways but I really like the accuracy / simplicity with the domino, though as my photos show not quite simple enough for me [FACE WITH TEARS OF JOY]. My long long term plan is to move into the sort of cabinet building Peter does as I’m in a county full of old buildings and alcoves and am fed up with the day job, though young kid’s makes this a ten year rather than two year plan.

Thank you for taking the time to write your review Paul. Very interesting.

I presume this machine can be used with oil and thinners based products as well as the water based ones?
L

Hi will yes it can (according to the manual )

nice job
Do you have a link to peter Video on the spray gun??

I am delighted to learn that other people bring the same "bull in a china shop" approach that I have . Attention to detail, methodical working, measure twice, cut once, patience - all things that appear to be beyond me. A builder once told me that the art of building is learning how to hide your mistakes - woodwork may be similar, but with less room to hide.

I am particularly impressed with your spray finish - I have everything I need to try it, except the courage. I need to buy some paint and play before I make something which I can then ruin. Not my normal approach, obviously - my life is a litany of errors, backed by a soundtrack of Jeremy Clarkson voiceovers: "What could possibly go wrong?", "How hard could it be?", and my personal favourite, "The worst woodworker.......in the world".

Thank you for the warts and all WIP.
P

tomthumbtom8":2qt5p2sk said:
nice job
Do you have a link to peter Video on the spray gun??
Click to expand...

It’s popped up in a few vids, but this was the start.
P

Paul, they look excellent - and as Will says, they look way better than my first attempt at anything like this!

Everybody has made those same mistakes with the Domino - it’s a rite of passage - and it’s always better to make the mistakes on something for your own home!

Good to see you got the results you were after with the spraying - ear defenders and face-mask are a must!

Look forward to seeing your next project - keep us posted! P
L

Peter, thanks again for your help, without it there would be a pile of badly painted mrmdf in my garage, and a lot of children’s books on the floor

Peter thank you for the link
R

I have the same spray gun based off Peter's review in his videos. I'm very impressed - I got an excellent finish with very little practice with thinned acrylic eggshell. It really is so straightforward I don't know why I didn't try it before.

As mentioned ear defenders and dust mask (I'd also suggest eye protection) as a must. It also throws out a fair amount of dust, so being able to shut the room and let it settle (and an air filter) are a very good idea if you're not outside.
W

Little suggestion to you guys with this bit of kit, try ordering some professional grade paint from the likes of Morrells or Tikkurila.

I was using the Leyland and Dulux trade paints and got a good result but the switch to the pro grade paints has really jumped up the quality of my finished results and is actually easier to achieve.
L

will1983":2z5r0cv7 said:
Little suggestion to you guys with this bit of kit, try ordering some professional grade paint from the likes of Morrells or Tikkurila.

I was using the Leyland and Dulux trade paints and got a good result but the switch to the pro grade paints has really jumped up the quality of my finished results and is actually easier to achieve.
Click to expand...

Thanks for that will I had been considering that, where do you order from and which paints ?

Best to buy from Tikkurila direct (Tikkurila.co.uk for details) though you have to phone them to place an order. I mostly use Helmi 30 (30% sheen, satin finish). They’ll colour match to pretty much anything.

Never got on with Morells; started a conversation with them when I first started spraying, but they totally lost interest when I said I was 100% water-based - so I spent a few grand last year with Tikkurila instead <shrug>

Question
has anyone used wipe on wipe off wood finish ie

My very first project was a dining room suite; Sideboard, table and chairs. We lived in a two-up two-down villa type at the time and I had nowhere to work. There was just enough room to lay down a sheet of walnut veneered blockboard in the yard. On hands and knees I crawled about cutting the various components with a back saw. I think I was lucky. My wife never interfered. We had discussed what we wanted and she left it to me to get on with it it. We had that suite 45 years and it might have lasted much longer but my expertise in the 1960s was not what it is now. Now that my physical capabilities have waned Sod's Law says I have to buy items like this. Hey ho such is life. But still my Lady never complains.
John (hammer)
You must log in or register to reply here.
Share:
Facebook Twitter Reddit Pinterest Tumblr WhatsApp Email Link