That sounds fantastic! I'll have a think about design then proceed to outline sketches to see if my designs are feasible. I'm a total newbie at sheet metal work. Needs a rethink from ply!

The other thing I am looking for is a brazing setup. My workshop is the garage attached to the house, and there's too much fire risk so do anything substantial in the small space available. I do know how to braze but just do small things like clarinet keys. I'll need more heat to do the two drawbars for collets that I need. Do you have this?

Obviously I'll be happy to compensate you for materials and time.

BTW I loved your metalwork/machinery thread!

Thanks Keith, nice to hear people are enjoying it! We do have oxy-propane and oxy-acetylene but I've never had a go at brazing though, I've only used it for freeing rusted parts :lol:
M

Sounds good! I have all the brazing rods and fluxes so maybe we could have a go sometime.
M

So a big milestone today, the First Cut!

The belt though wide, ran perfectly well. I'll leave it on at least for now. Tensioner sorted out (pic later), motor mounted after layshaft cleaned up, and with a good tension pulled there was no sign of slippage or running off the pulleys. It's only a 0.55 HP motor but plenty of power and torque. 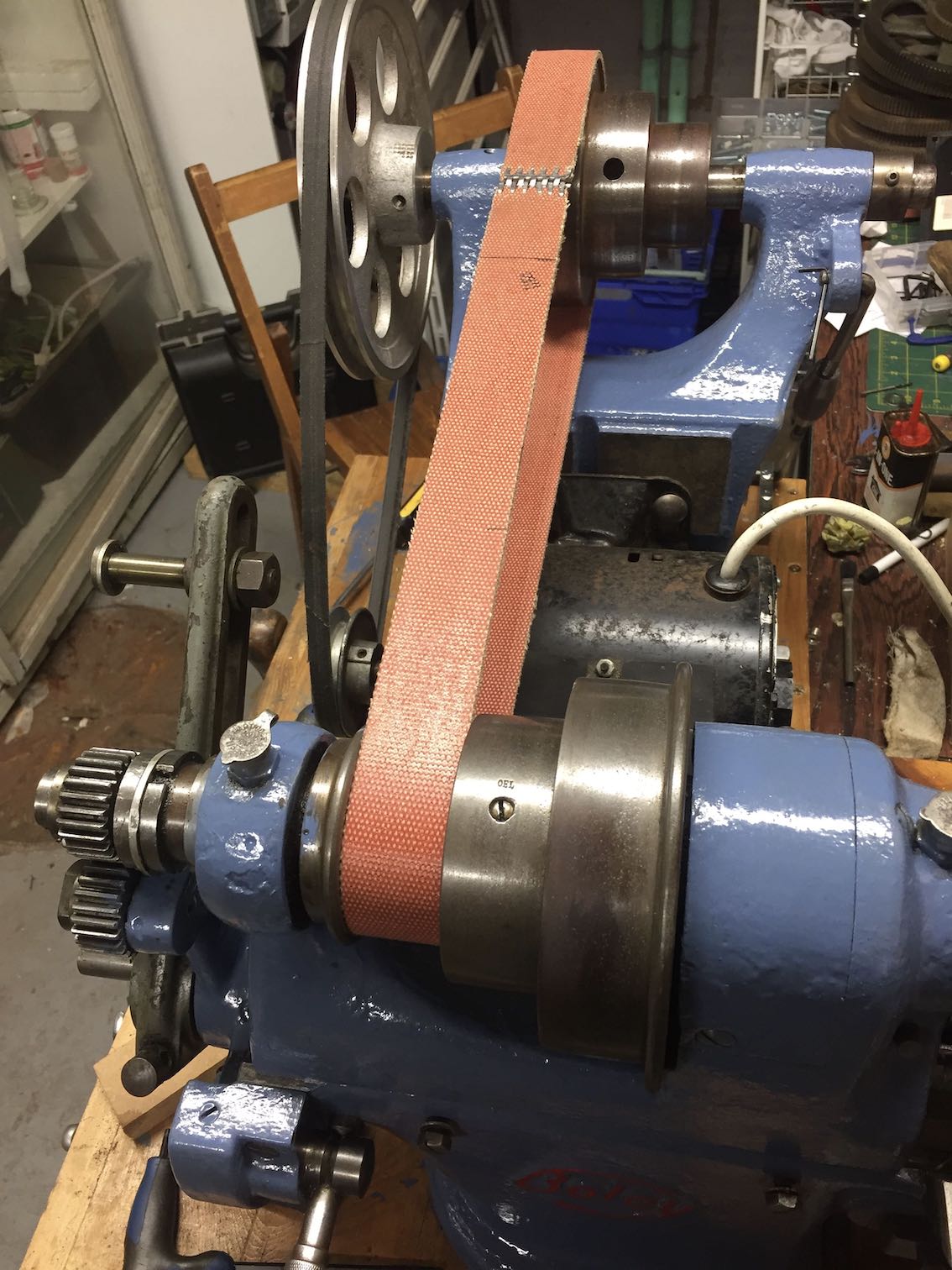 So, mounted the 3-jaw chuck and took the first cut, on an unknown but fairly tough steel. Just hand driven on the top slide. Very nice! 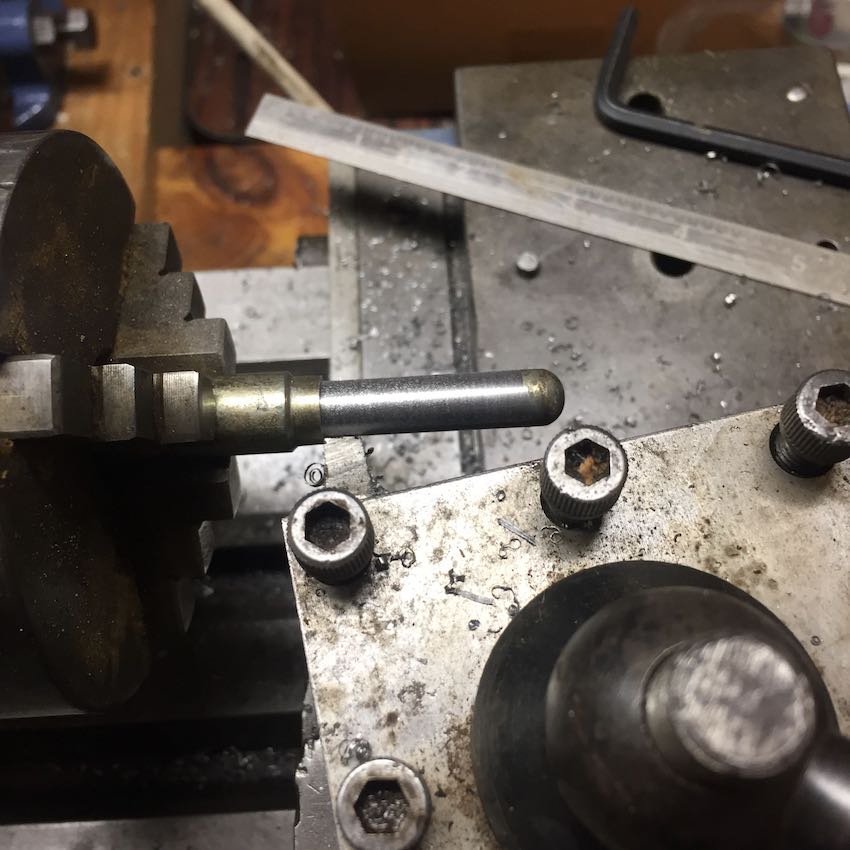 And it copes with a 1.8 mm cut without any complaint at all: 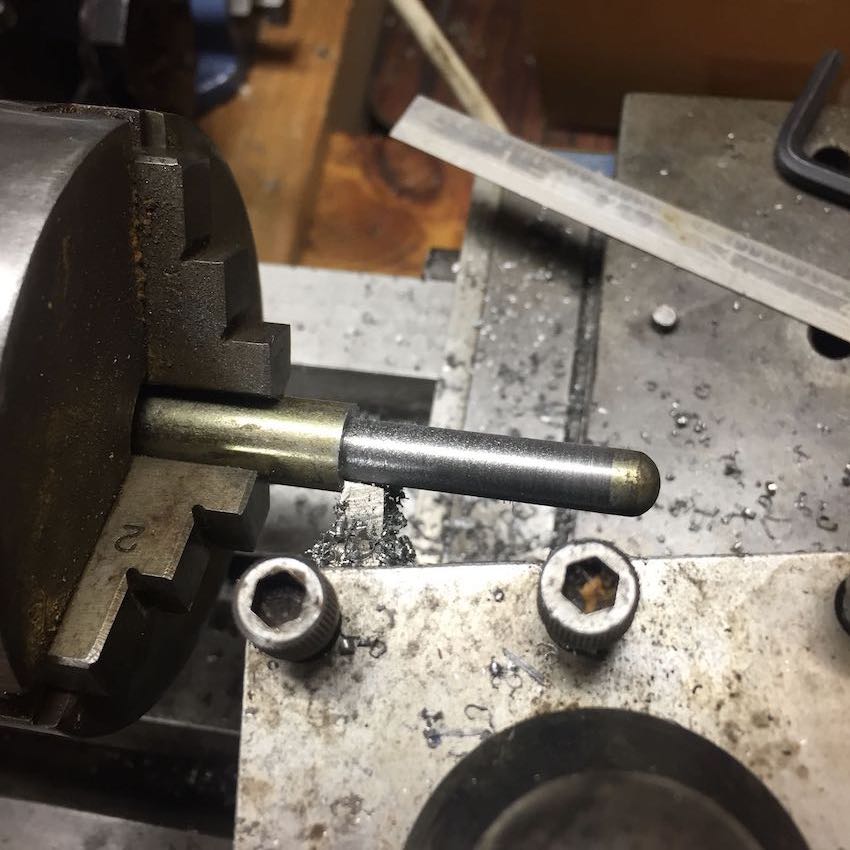 So this justifies all the effort.

Still plenty to do: work out the gearing for auto traverse speeds and thread cutting, check the limit stops, try some thread cutting, make storage for the gears, make the safety shielding, make a drawbar for the collets (hopefully TFrench can help with the sheet metal folding and the brazing station for these).

Sorting out the gearing today, cleaning and checking what I have. It's a full set every 5 teeth from 20 to 130 teeth, plus 127 (essential for doing both metric and inch).

Quite a shock when I checked the leadscrew. All the Boleys I have seen or seen documented (that's quite a few) have 5 mm or 6 mm pitch leadscrews. This one is Imperial! It is 6 TPI. So for a metric pitch the 127 teeth cog is essential in the second or fourth position in the gear train (since 1" = 25.4 mm exactly). So I spent this afternoon working out the gear trains for metric pitches. The 127 cog stays on the lead screw shaft, and the others will cope with all the ISO metric threads down to 0.2 mm, with the addition of another 25 tooth gear and a 36 tooth. They are available at reasonable prices from HPC. I don't think my miller is really suitable, one needs a horizontal miller with dividing head or a gear hobber.

I have never seen mention of an Imperial screw for any Boley machine. I suppose it was made specially for the British market. Well, it is staying there, replacing a lead screw is not too bad but making and changing the split sprung nut would be a real nightmare.

Of course it makes Imperial threads a cinch, looking forward to being able to make 12 tpi left hand square thread for the Wadkin arbor nut! Needy Wadkinistas can get in line but don't hold your breath as it will be a while before I'm there. The hard bit will be grinding the tool.
M

So it's time to attend to the tailstock. Turned a soft centre in the chuck and compared it with that in the tailstock. Needed a slight lateral adjustment to match well, the the whole tailstock can be screw-adjusted both ways. Not too bad now, though from the side it might be a shade low. A shim under the headstock would sort that, but it needs more refined test cuts and measurements first.
(top view) 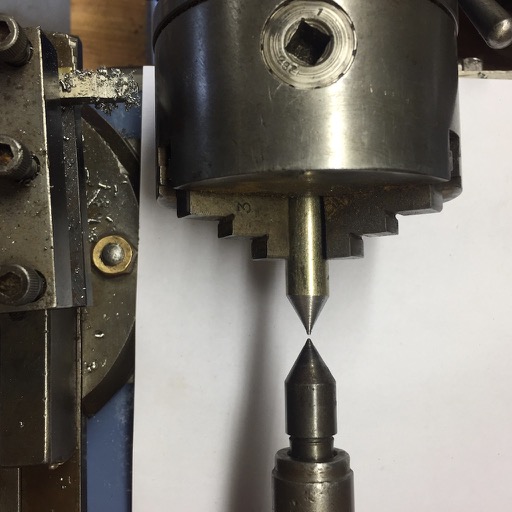 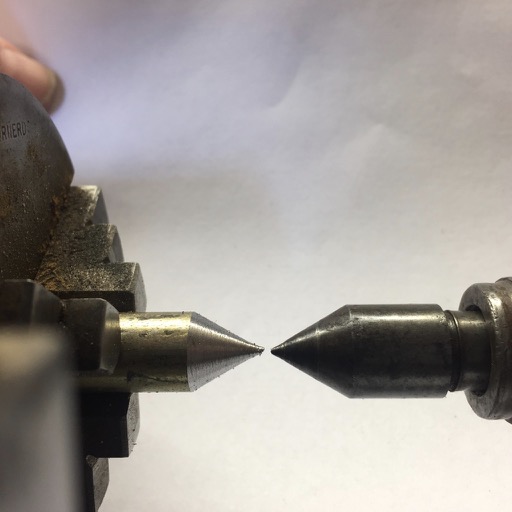 Now to tackle the quill and drive. In this design the nut is attached to the body, while the handle is fixed to the quill. A slot in the quill allows it to surround the fixed nut and also keeps it from rotating. The assembly at the handle end seemed unnecessarily complicated, and indeed was simplified on later Boley. I did have to remove it since the rod controlling both the thrust and the tool ejection was a lot too long, and my set of Morse taper 1 accessories wouldn't go in deep enough. The single centre with the lathe was very short, and I doubt it was a Morse taper at all.

In this one the retainer for the end of the lead screw was a very tight press fit on the end of the quill and the only way to get it off seemed to be by unscrewing the nut with enormous force. There was nowhere to fit a puller, and any hammering would damage it badly. So, extreme force it was, and the end broke off and twisted out, and the lead screw got quite badly bent. Oops. On seeing the broken inside it was clear that the construction was curious, the quill having a slot half way through it - which was invisible when I started pulling - and there was an insert inside with a washer inserted through a cutaway slot. It broke at the slot on the quill. This was probably all to get some floating alignment but was not necessary and indeed abandoned by Boley in later models.

Fortunately it was all recoverable at the cost of losing about 10 mm travel. First the broken end was cleaned up and bored back to its original state. It's now a push fit for the inner and outer components not a giant press job. For this I used the big Boley 4L lathe with a fixed steady, a good way to get the end running true before machining. Any eccentricity in the chuck end is greatly demagnified at the far end. 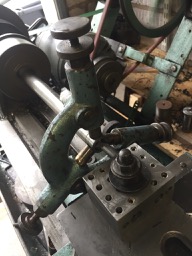 Now to straighten the lead screw. A collet mount is pretty essential here. I have this on the Boley 3C (plain turning) lathe that is eventually going to be sold (though I love it!). The idea is you clamp it in the collet just before the bend then push with the cross slide until it bends back and the portion near the chuck runs true on releasing the cross slide (this is easy to see). 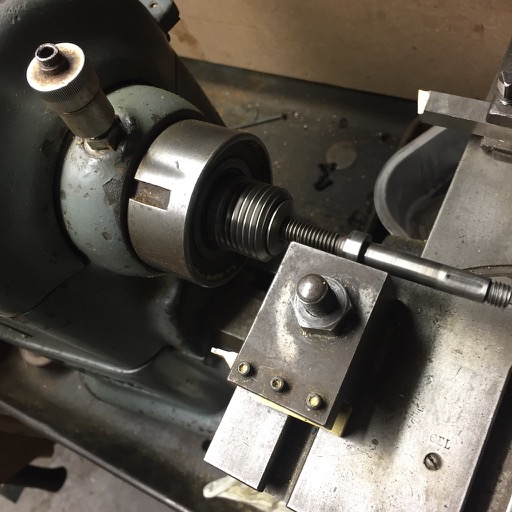 After 3 pushes it rolled fairly well on the surface plate. I'll reassemble it and see how it runs. This is not a very critical drive anyway, not like the cross slide.

Now to improve the taper, with a Morse No 1. reamer. I can do this in the new lathe, and at last I am using it to repair itself . 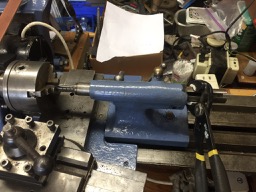 The taper was run to match that on the Boley 3C lathe, on which my No. 1 accessories fit well and eject nicely.

Next step: make the slug that does the pushing and ejection, then reassemble.

So both ups and downs today but ended up a little further ahead but with the tailstock potentially fitting well.

I jave no idea why two of the pics came out smaller, on the left, and cannot be magnified! Any advice welcome.
M

Taking a break from refitting, as the Evapo-rust arrived, so turned to cleaning gears. They were not heavily rusted but couldn't be cleaned just with a wire brush. On the left, the brush cleaning alone. In the red 'saucer', the gears soaking in Evapo-rust. Top, after derusting and drying - during which a thin layer of rust tended to appear . Right, rubbing lightly with wire wool to remove this thin film, and covering with thin oil for protection. It is very good stuff, thanks for the post recommending it, Wallace! 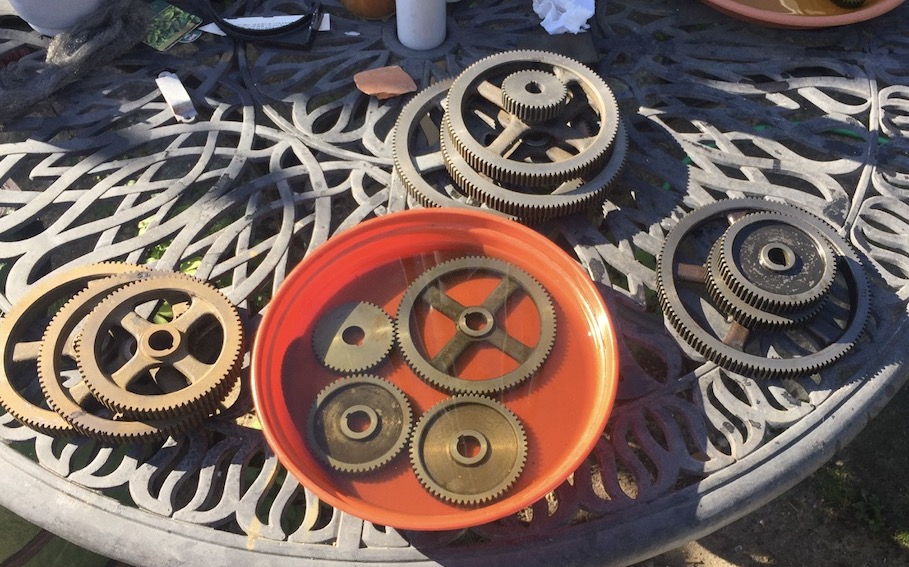 Its good stuff that evaporust. I tried to get Frost automotive to give me some free if I was to advertise their product on my little site. I cant imagine how much it cost for keith rucker to fill a vat with the stuff.
For aligning the tailstock I saw 'doubleboost' off youtube use some thin sheet and clamp it between centres. If it clamped then head and tail were aligned.
I've been very tempted to get a little metal lathe, I've been using my wood lathe for bits
M

That's a neat method. I use a thin steel rule also but the foil is new to me.

If you hang on a few weeks till the 3L is really finished, my beautiful Boley 3C plain turning lathe will become available. It's a brilliant small lathe as long as you don't need screw cutting. I'd love it to go to a good home! I will be keeping most of the chucks/collets/accessories but I should be able to thread a new backplate with the new lathe. 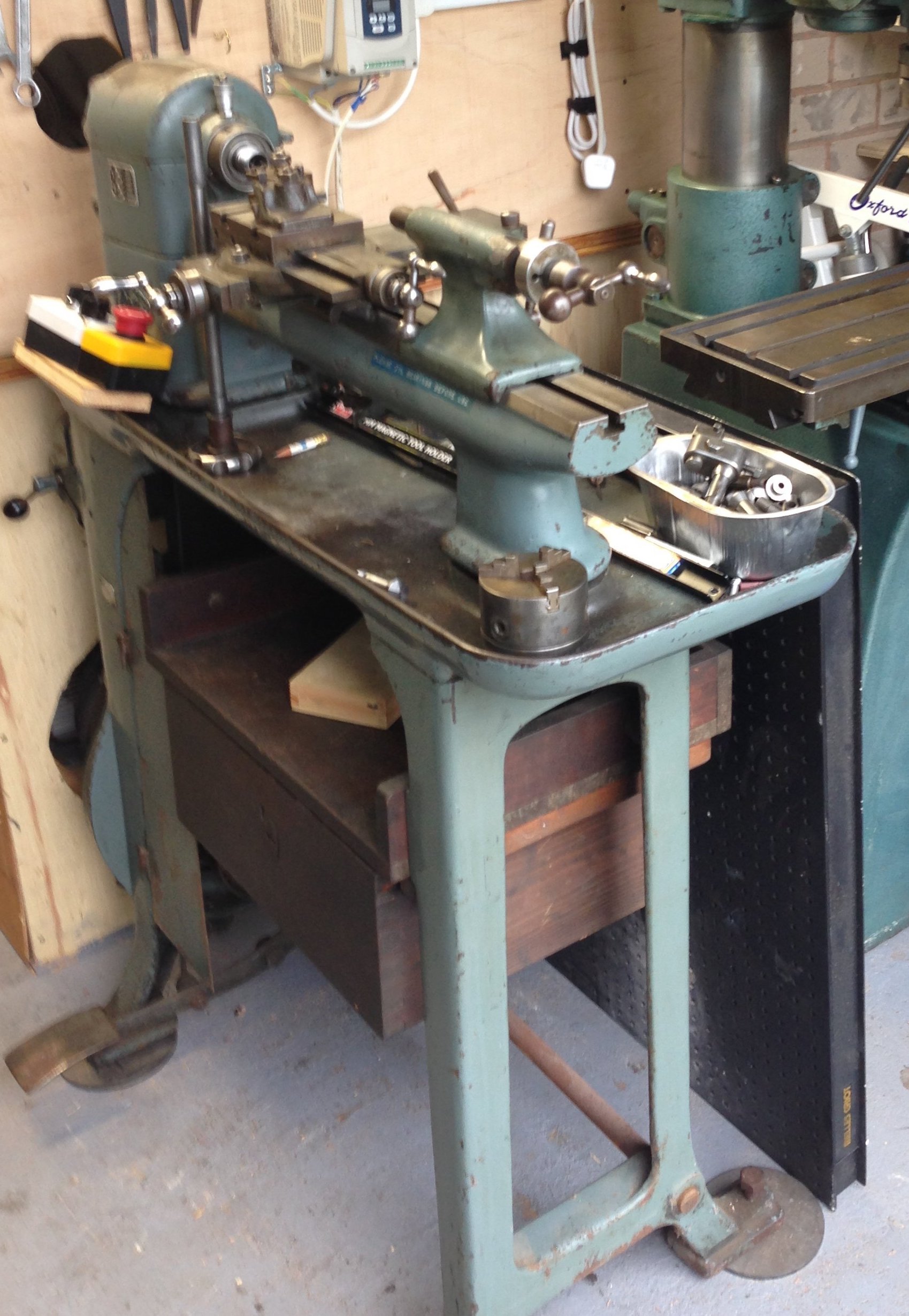 wallace":1mn9hwqd said:
Its good stuff that evaporust. I tried to get Frost automotive to give me some free if I was to advertise their product on my little site. I cant imagine how much it cost for keith rucker to fill a vat with the stuff.
Click to expand...

I'm thinking evaporust probably donated him a fair bit, its a pretty good advert for them!

T
Lathe for a beginner
2