This is going to be slow going, but I thought I'd do a blow-by-blow posting on my latest project, a coffee table. My back still isn't great, so it's an hour on then a couple of hours off at the moment. Put it this way, it took me half a day to get a board from here: 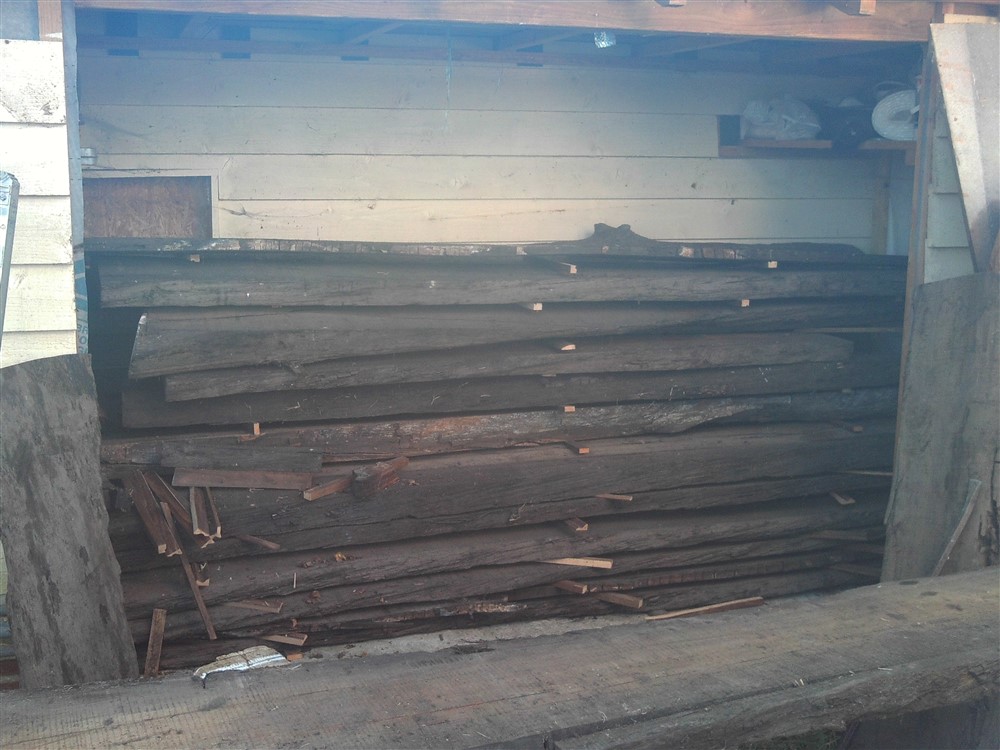 to here (half a metre away). To be fair, it was the 4th board down: 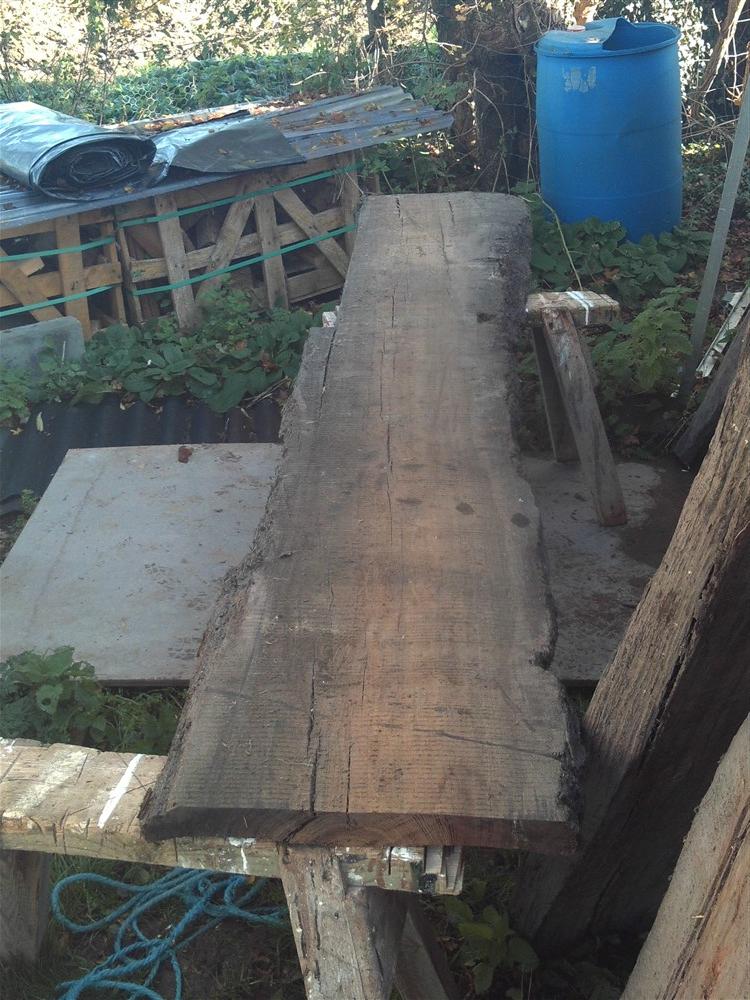 I think of this timber as so precious that I stood and stared at it for ages, working out where to cut it. Finally, I plucked up the courage and cut it into three. I buzzed over the bits with an electric planer, just to get an idea of where the colours were: 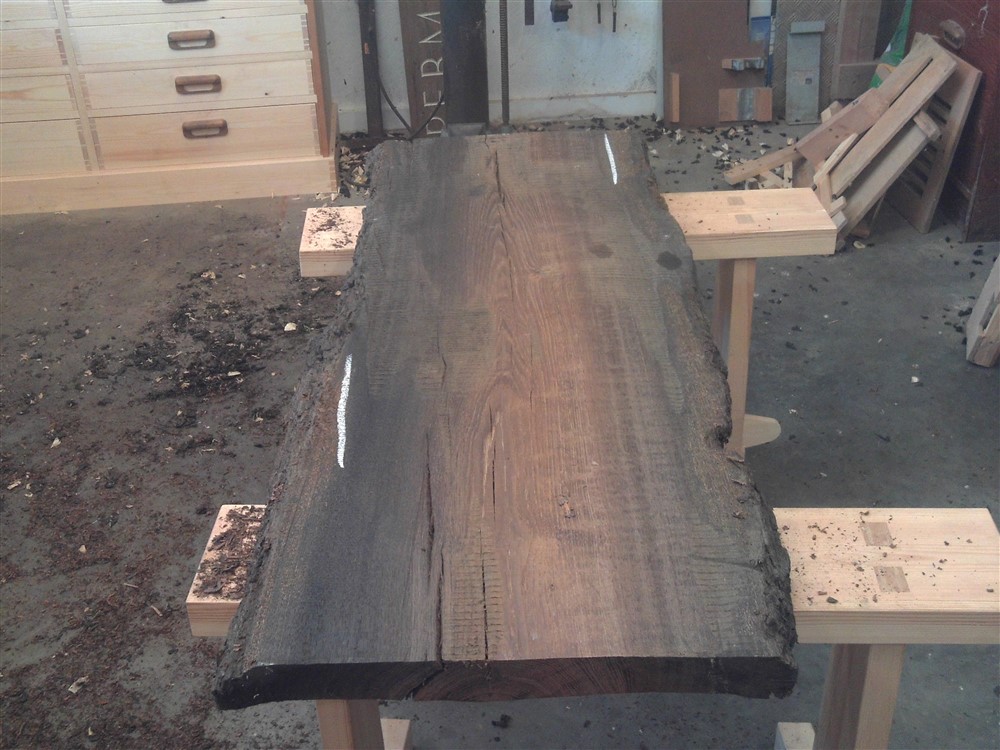 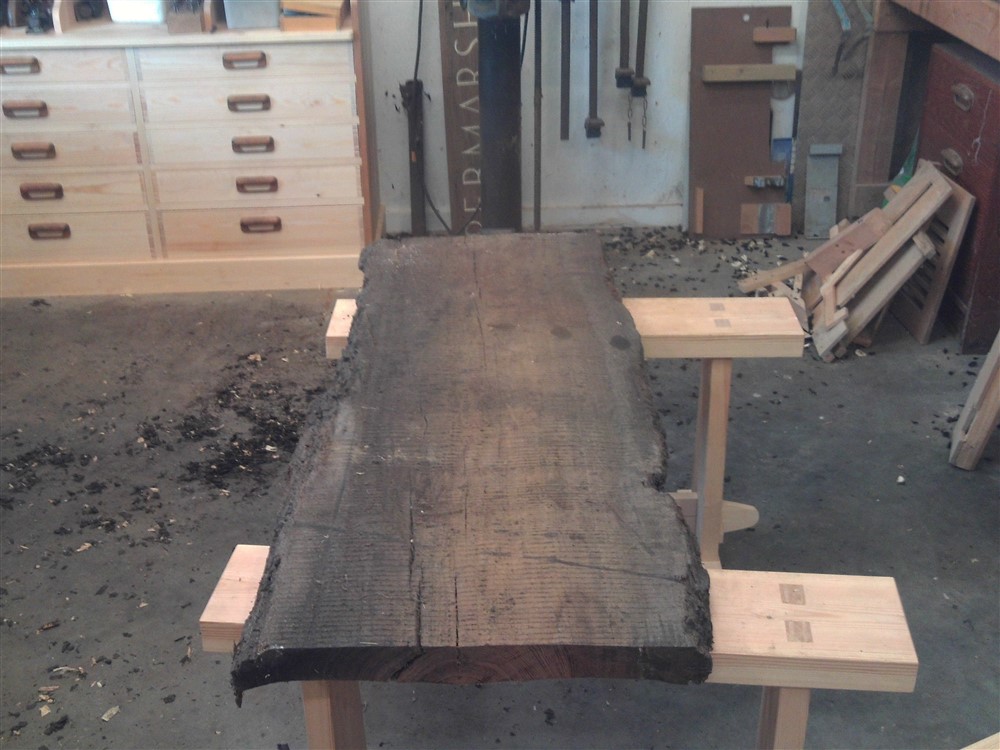 They're around 350 wide, so too wide for my planer. Thus scrub plane, by hand, and that's not great for a dodgy back: 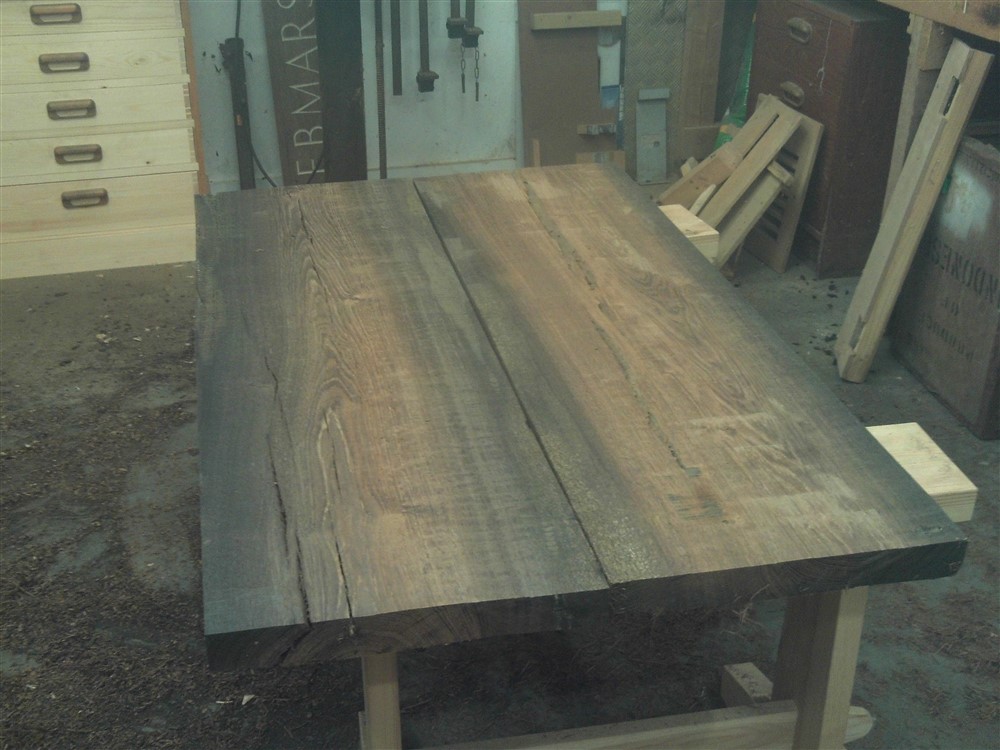 There are some serious cracks: 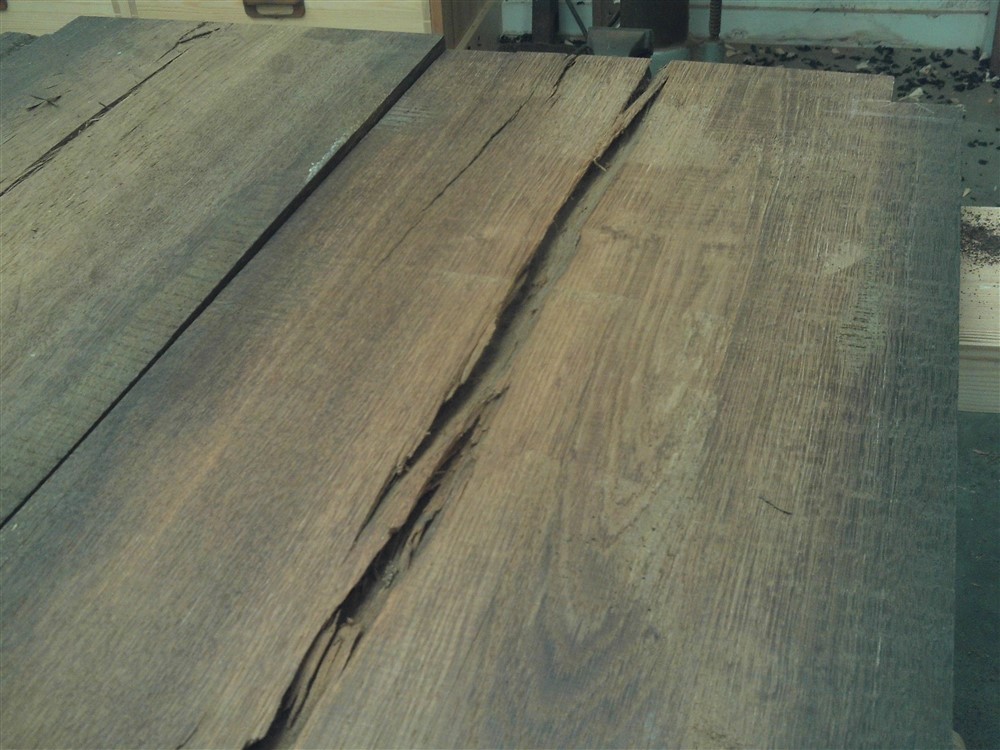 Had a long conflab with my wife about these, and in the end she suggested filling them with a contrasting filler!!!! Normally, it's me having to persuade her to try something a little bold. I'm delighted. I had offered the alternative of slicing the boards up into narrower pieces and gluing it back together without the cracks, but she wouldn't hear of it. There is still a conversation to be had about the colour, but my instinct is that we'll end up with black.

The other contrasting thing with this table is the legs. They're going to be ordinary oak. I found an offcut slab of old English oak that has kicked around here for years and years: 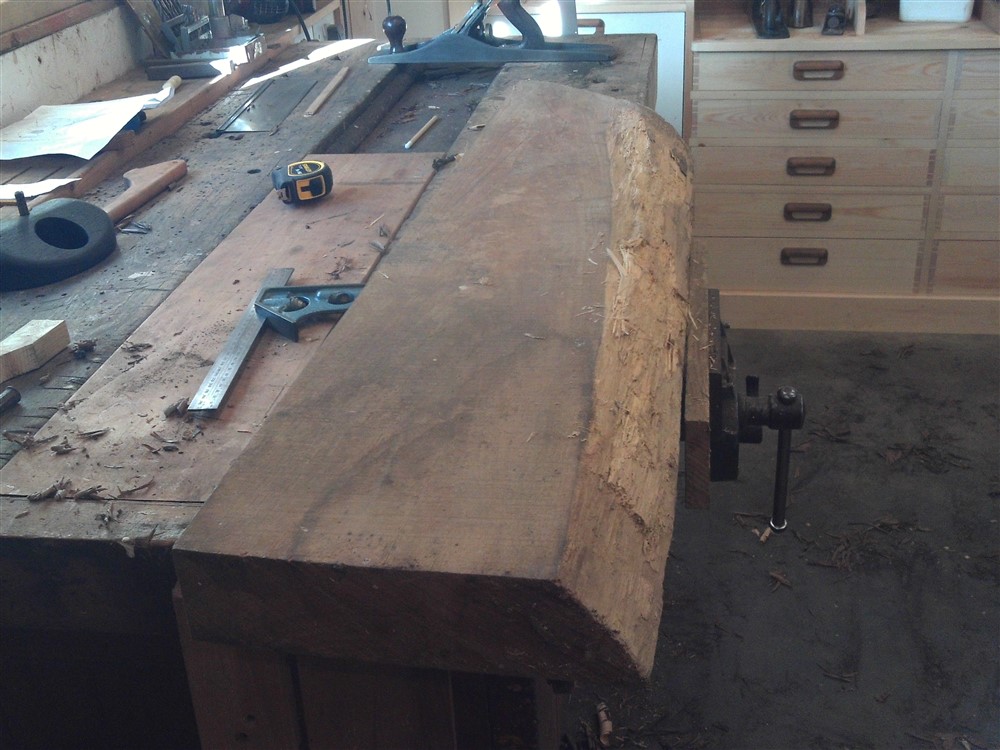 Unfortunately, it isn't rift sawn, but it's only me who will notice. I ripped it and hand-planed to 70 x 70 x 500, and it's going to make quite a contrast to the bog oak: 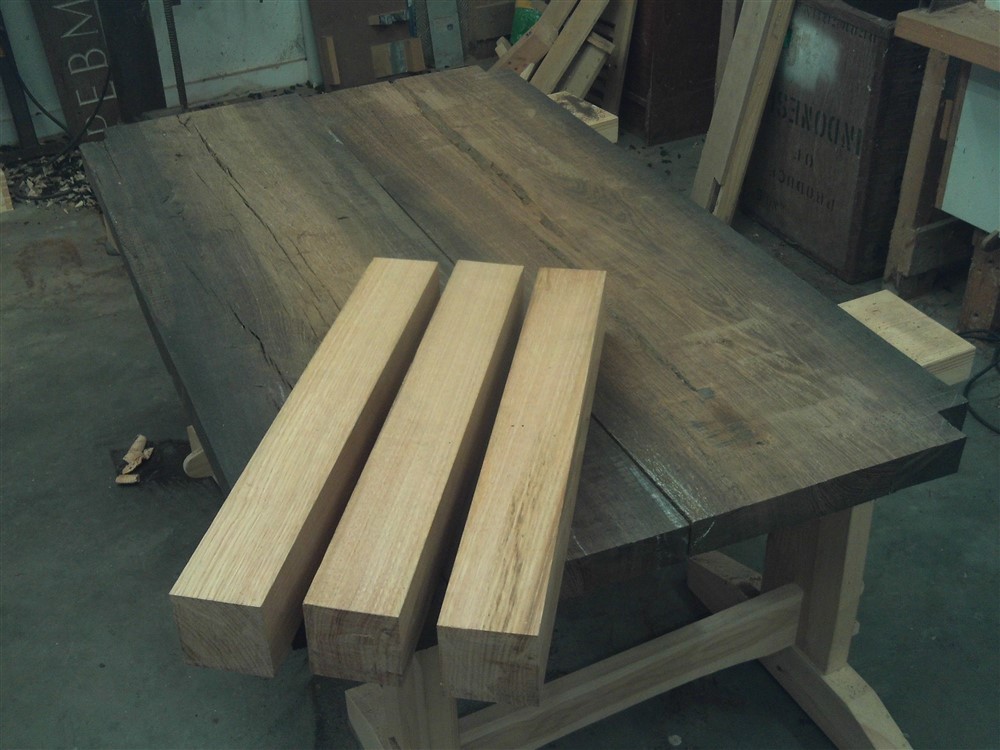 Only three legs, Mike? Well, no, the other one was off in clamps, as it had a long split: 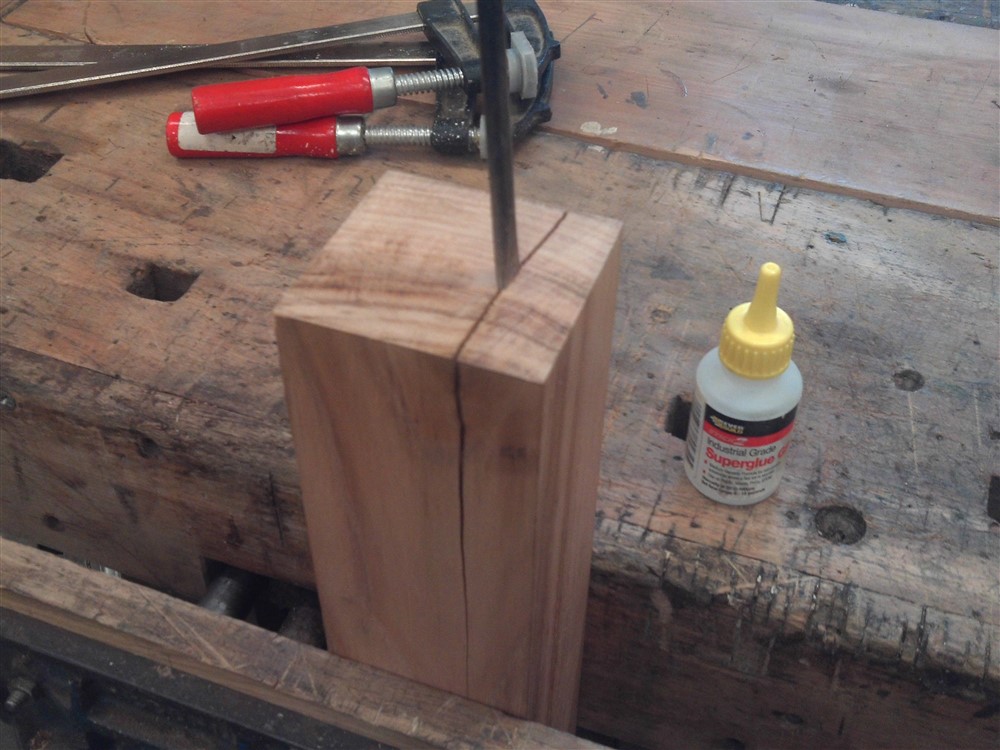 The observant may have noticed little squares cut out of the corners of the table top. They're not to size, but it is a recurring motif of mine to have table legs project through the corners above the top of the table. I cut those little bits out just to mark which were the outside corners, because tomorrow I am going to put these pieces through a friends planer thicknesser as my back isn't up to flattening them properly by hand, and I wanted to know which way the boards were oriented. It's one of the difficulties of the stuff that pencil marks don't show up........but I'd be planing them away anyway.
S

Looking forward to seeing your progress. Hope your back gets better soon

Popcorn and a drink and a nice chair.

let the show start looking forward to this one Mike

I keep looking at my plank and thinking.

I did plane one bit up, and used the shavings to mulch the garden.

There was going to be, but that was omitted at the last design team meeting
O

This looks like a very interesting project. I will hang around and watch.
Regards
John
T

tomthumbtom8":2lik97g5 said:
Out of interest where did you buy your bog oak from and price if you remember please
Click to expand...

I bought it from a local farmer, who'd bought it off some gypsies 25 years ago, used what he wanted and then just stored it in a barn. There's 2-1/2 tons of it, and I got it for a great price.

Looking forward to how this progresses for sure. Hope the back sorts itself out, but, lumping all that lot around won't help much I fear.
S

I tried to share my luck with the forum, but the mods prevented it.
T

wish I could get my hands on some

Kent is the nearest place

The contrasting brown is lovely. Special bit of timber. Those pens are going to be a bit bigger than normal.
Looking forward to the build Mike, thanks for going to the trouble of sharing the wip.

On the fill colour... have you thought about copper... (hammer)
I messed about with goldleaf on the bottom of a box I finished a few days ago because I had some in a drawer from about 10 years ago. Knew it would come in handy! Id rather have used copper. The Mrs bought a coconut shell bowl on holiday and it has copper leaf on the internal. I scoffed at the time but its a nicer colour imo than the gold with a darker wood. 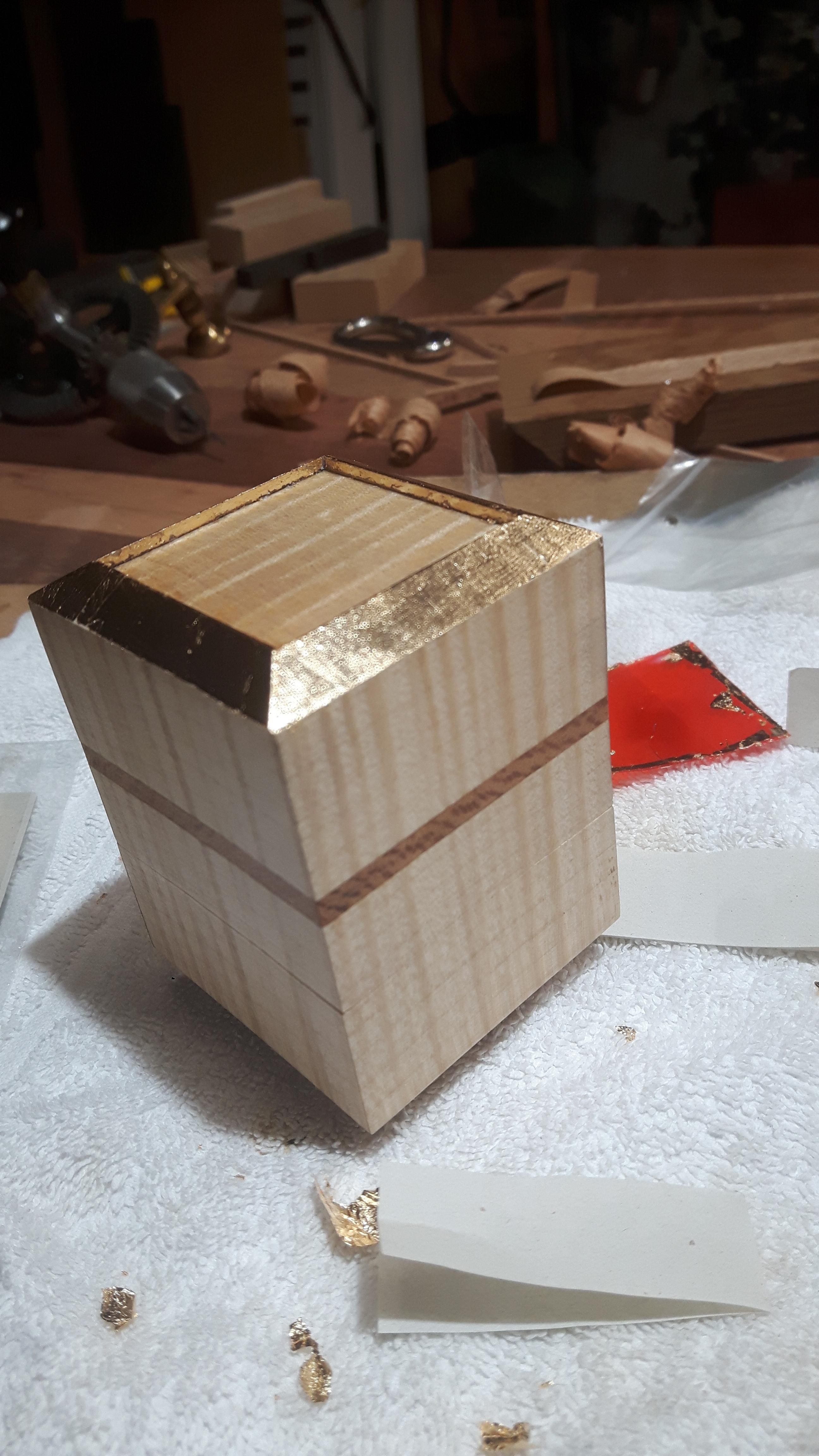 I mentioned that I would be doing a test for how I might fill in the large cracks in the table top Here is the result: 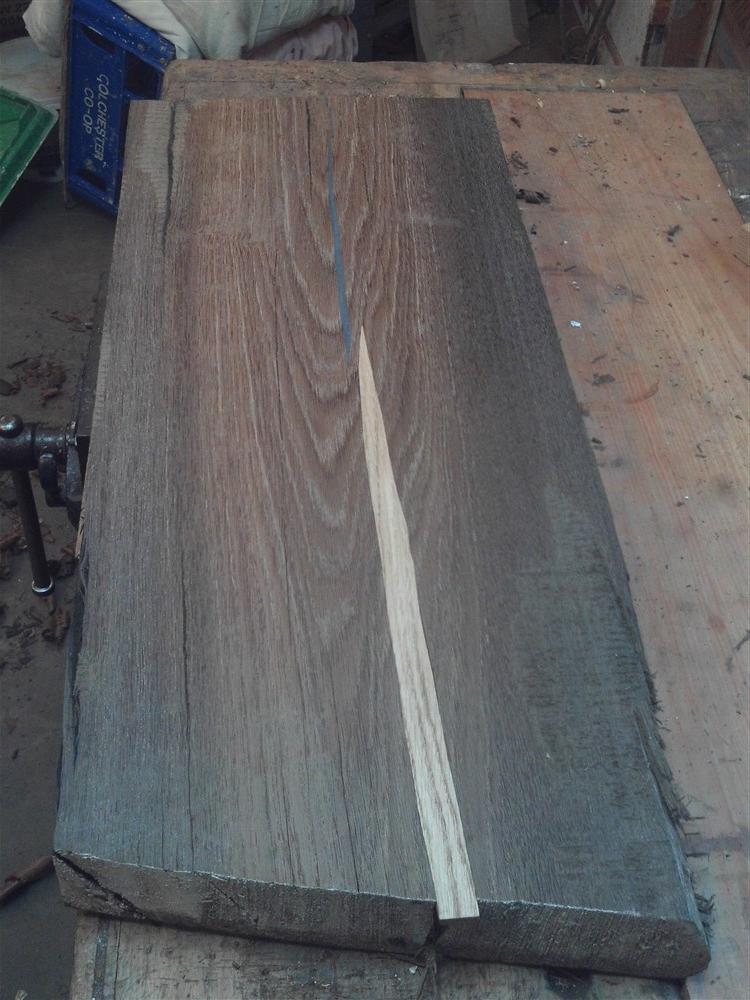 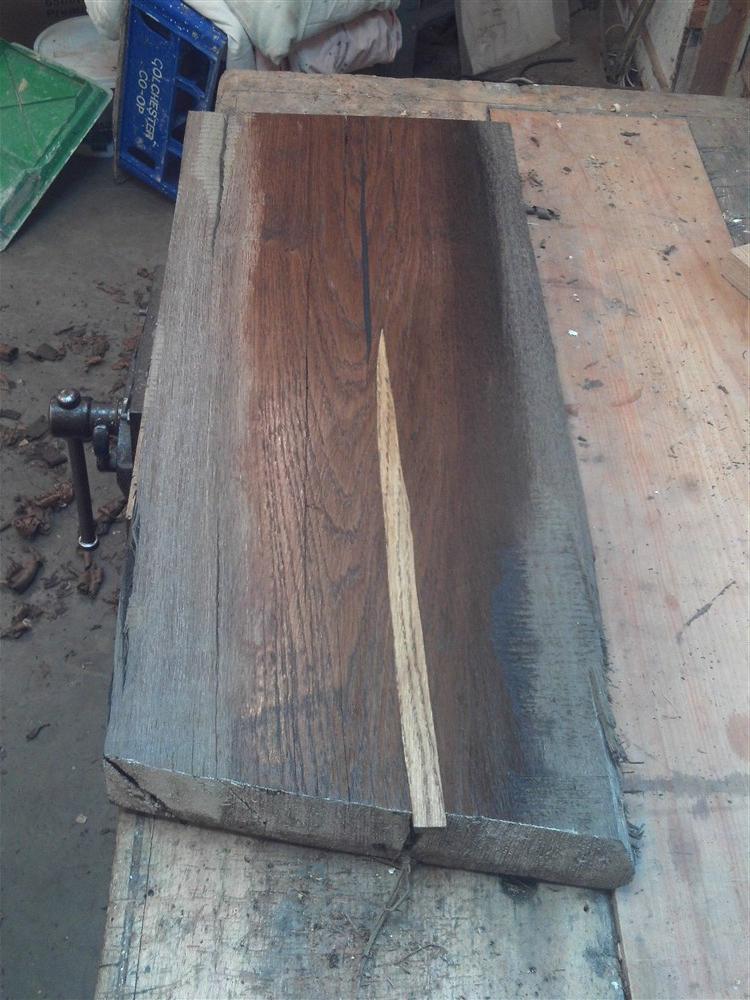 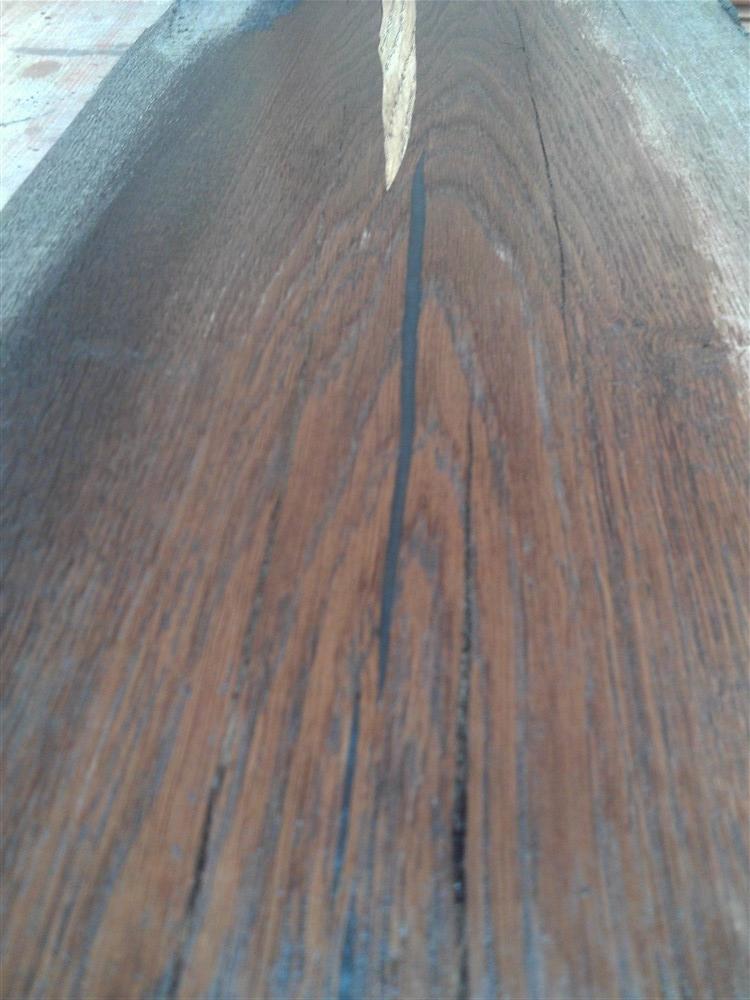 So, it's definitely not going to be the oak inlay!! That was lots of work, and looks horrible. Black filler it is......

I spent quite a bit of time cutting and flattening the apron and drawer fronts. The wood for those is beautiful, but all over the place. It took loads of work. Here you can see winding sticks in use for the long apron on the back of the table: 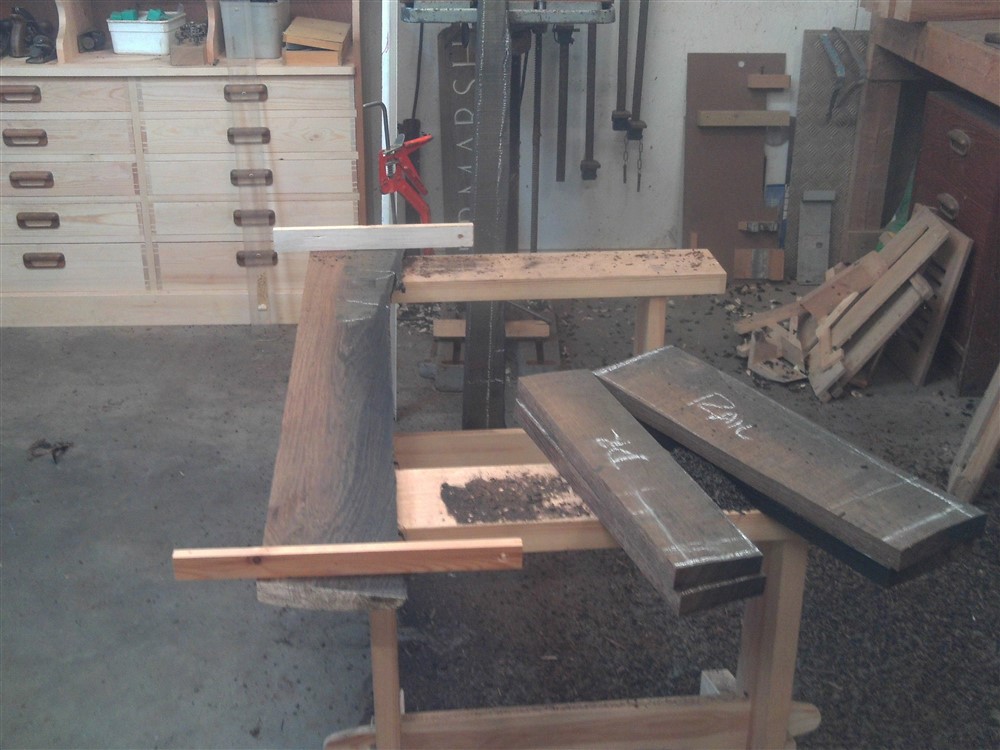 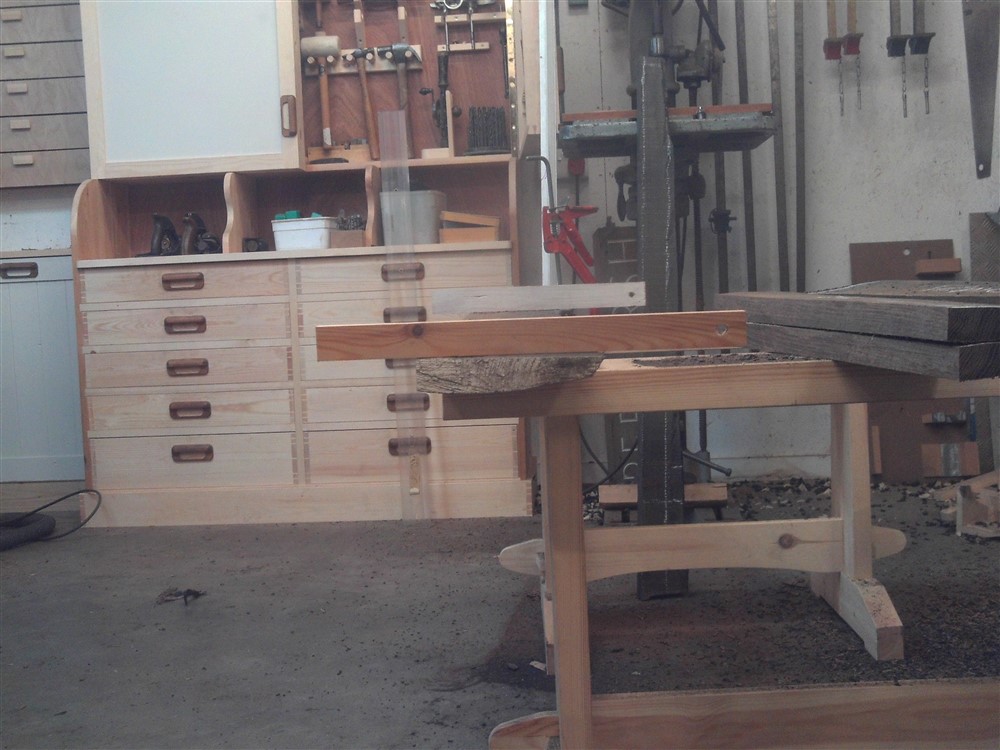 Pity I didn't take the "before" photo, as it was a bit of a joke....probably 25 degrees difference! Oh, and this illustrates my "over-under" winding stick technique, meaning that the sticks don't have to be the same size (but they do have to be set up at right angles to the workpiece).

I love seeing beauty emerge from a really unprepossessing piece of wood: 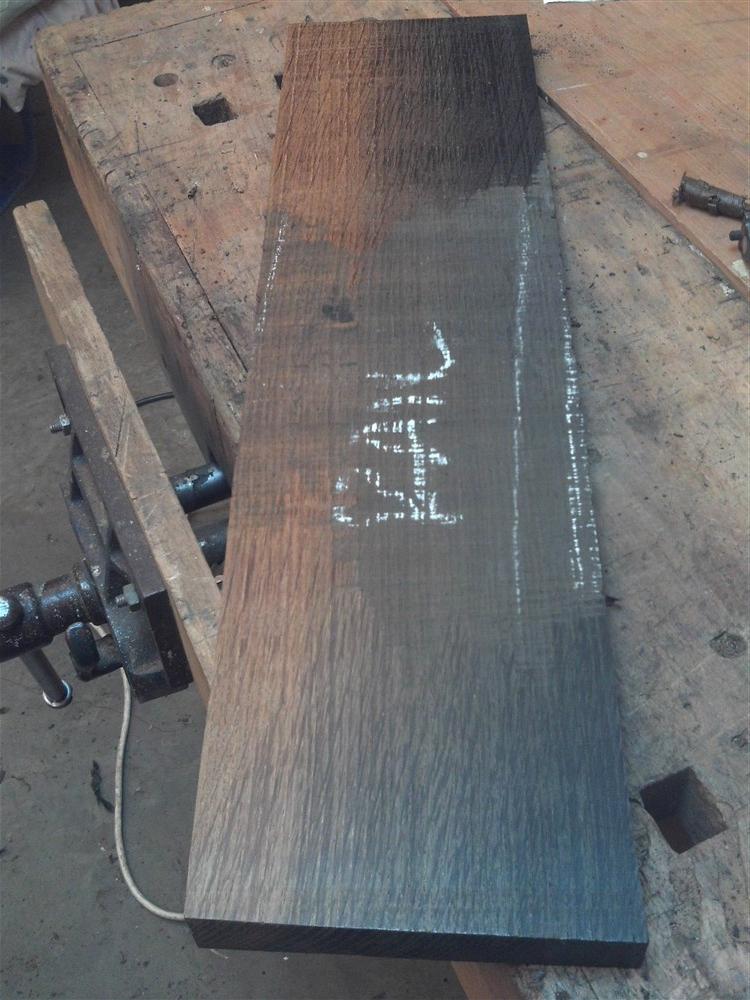 This is the bulk of the structural timbers done: 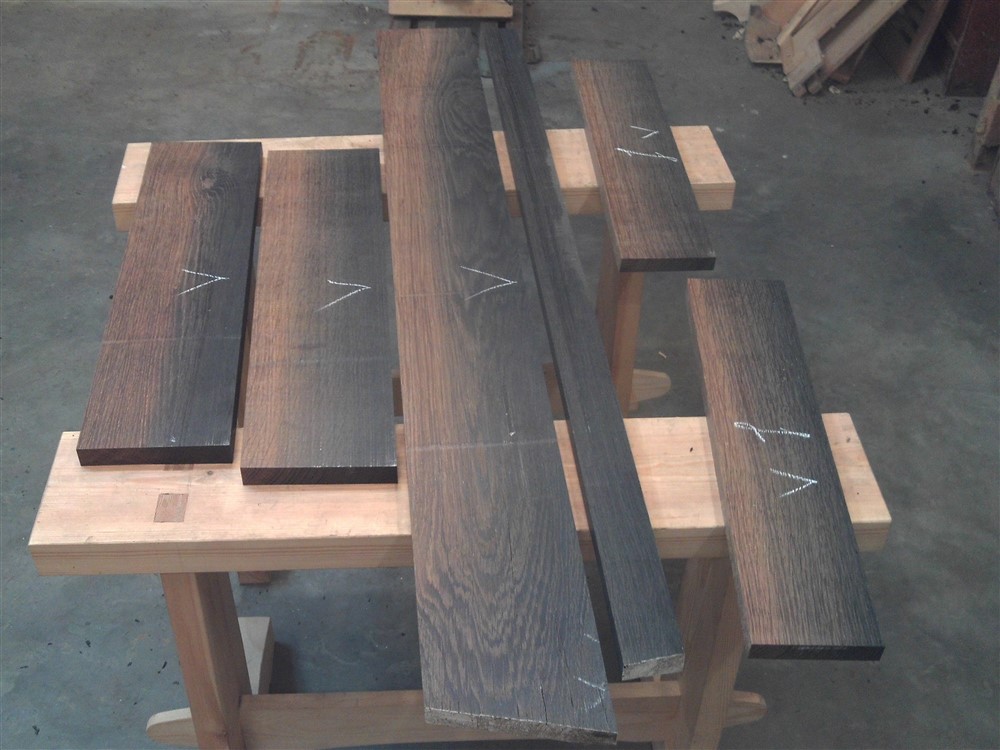 You'll see when I come to doing the joints that the aprons are only good one side. This is because they were so twisted and mis-shapen that the long one would have ended up under 15mm thick if I'd thicknessed it, and one of the side ones wouldn't have been much more.

I inset some butterflies into the underside of the tops, and they've done a great job of stabilising the huge crack (which goes all the way through, obviously): 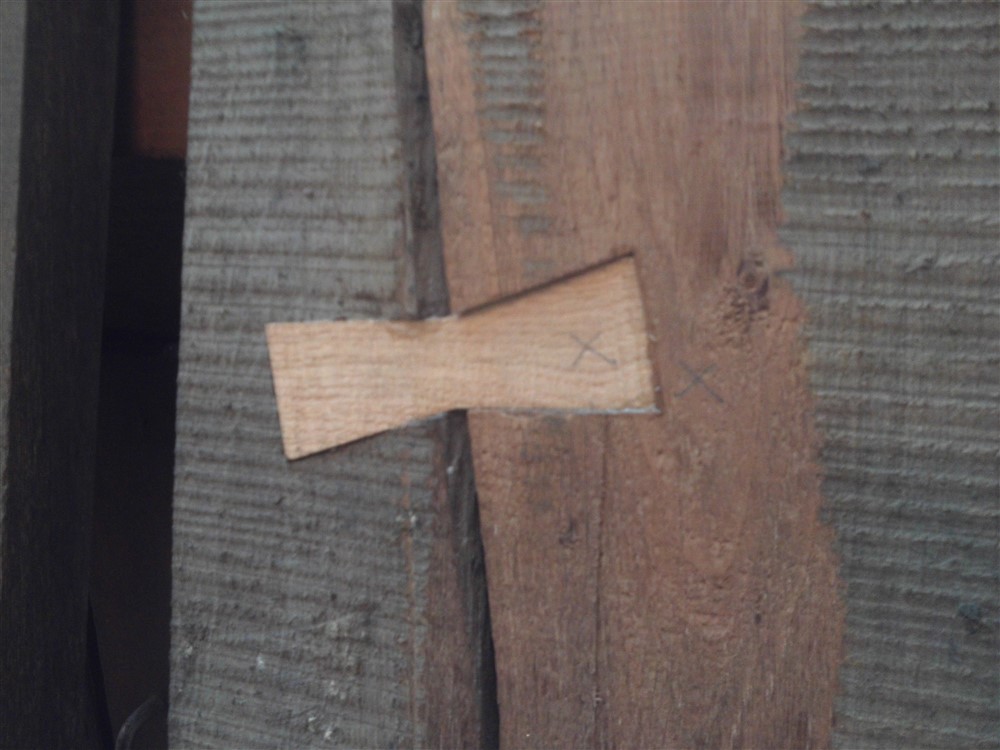 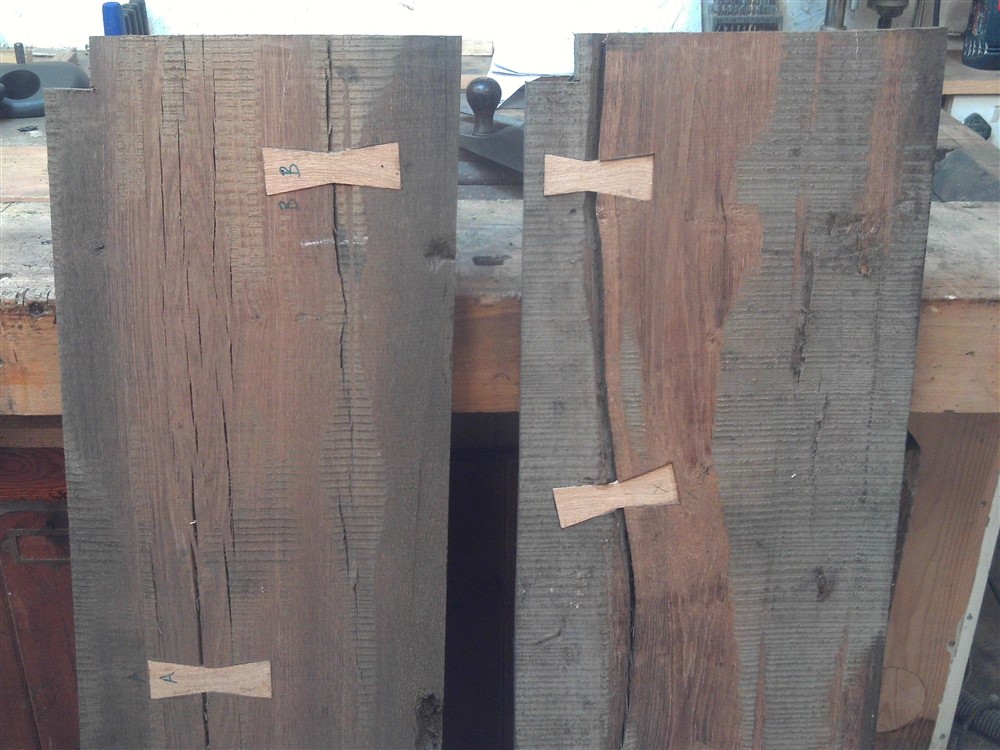 You can see that the undersides of the table top boards haven't been flattened yet. I am proposing to fill them first, then take them to a large thicknesser.

How does it feel to be working with wood that's been in a bog for a couple thousand years?

Will you be cutting butterflies in the top Mike?

Trevanion":3f1x7wl9 said:
How does it feel to be working with wood that's been in a bog for a couple thousand years?
Click to expand...

Three things........firstly, it's absolutely filthy. Your hands end up looking like you've stripped a gearbox. The dust is fine, black, and gets absolutely everywhere. Secondly, it's waxy. It's really quite different from ordinary oak in texture. I really like it, particularly planing and chiseling it, which seems much easier than normal stuff. Finally, you can't see what you're doing. Lines are virtually impossible to see, even though I've been drawing with a white pencil. I couldn't see the tip of the router when doing the butterflies (why doesn't my router have a light like my impact driver does?). The blackness just kills the light, and you really may as well be working by braille. When I come to do the joinery I'll be applying masking tape and marking that. I'm thinking of doing through dovetails for the drawer fronts, contrasting with the oak drawer sides, so I'd better have worked out how to see markings before then!

marcros":1bpezhp9 said:
Will you be cutting butterflies in the top Mike?
Click to expand...

Probably not. My wife would take some convincing, I think.
S

The timber is really lovely. Warm and dramatic. I think the through dovetails would be nice.

Black filler is a good call.

Thanks Sammy. I agree, this timber is stunning. I'm really hoping this piece of furniture does it justice. You have to be sooooooo careful with contrasting timber, but there's a double complication here. Firstly, the timber is a contrast to itself, with two different colours. Secondly, the contrast between both of those and the new oak legs. I'll mock up the through dovetail drawers first, and see what they look like before I decide on that. I'm also thinking of having (new) oak drawer handles.
You must log in or register to reply here.
Share:
Facebook Twitter Reddit Pinterest Tumblr WhatsApp Email Link