A long time since I've been on here - life getting in the way of woodwork.

Over the weekend I tried to knock together a replica Roman Shield (Scutum, for those whose children are also obsessing on one subject) using some old 4mm ply I had knocking round in garage. I glued up a couple of sheets of 900mmx480mm and bent them round a waterbut while they dried using ratchet straps to clamp. Unfortunately it failed. The edges stuck but the centres arched slighlty differently and there was a gap. I put this down to not having enough cauls running vertically, I only had them at the edges and one towards the middle. Also the only glue I could lay my hands on was some rather old TItebond II, that was a bit lumpy (and had quite possibly gone below zero at some point). The ply did bnd, but it took quite a bit of pressure to get to the curvature of the waterbut.

So, having promised this shield to my son, I need to have a go at another fairly soon. Considering that Covid restrictions are still in place, what sort of ply would be best for bending while being cheap (as I can see it being used for a month and then forgotten about), and available?
Jewson's are offering ESSGEE Plywood FSC 2440 x 1220 x 3.6mm, or Poplar Core Plywood FSC 2440 x 1220 x 3.6mm, both at about £18 per sheet. Any other options? West of Bristol if that helps.

As I'm going to have to get some more, what glue would be best?

For that application, I would go for contact cement, I think. Poplar is quite soft so that could be your best bet.
L

What about hardboard?
I think if you rested the wood on a row of house bricks along either long edge and then more on top but in the middle it would sag sufficiently in a few days.
T

Thanks for the replies. My thought about Contact Adhesive is that I wouldn't be able to get a bend on the ply with both panels, at least using the method I did with v1. Which was to apply glue and stick panels together and then bend them around the water but by doing up the ratchet cramps (sticking more cauls in this time). Contact Adhesive wouldn't allow enough movement when the pressure was applied. I may go for a tightbond or similar again. The other alternative I was looking at (possibly becuase I had a small bottle hanging around) was Gorilla Glue, whihc would fill any gaps. My worry here is that expansion may push the panels apart, or that the open time wouldn't be long enough (or it gets too expensive).

I will have a think about the hardboard idea. Not sure how I would attach a handle that would stay, perhaps glue would be sufficient.

Make a thin sandwich using some spacer and clamp it to the barrel and fill it with expanding foam. It will set in the shape of the barrel and then you just trim the edge
have used this method many time to get curvy cuboards and cabinets in camper vans while keeping weight down
W

Before buying,take a look at the ply.If either of them has a core that looks to be 80% of the total thickness it gets harder to bend without the risk of breakage.I would need a lot of convincing to use a contact adhesive as they tend to creep.A known PVA or Cascamite would ordinarily work.
B

We made a few 'heater' shields in our early years of re-enactment. Then proceeded to hit them (very hard) with steel swords. Our technique was to make a former that was cut to the shape we wanted out of 2x4 we made three of them and spaced them equally using batons. Put the 'jig' on the floor and used three sheets of ply (don't cut them to shape yet) Lather PVA glue all over one side, place on the jig. same with layer two, put on 1st one, Lather that one with PVA. then put the last one on it. Now the secret bit. Stand on it. It will bend enough to touch the bottom of the jig, If it doesn't your ply is too thick. Then screw it to the former. Start in the middle and work outwards. leave it for a couple of days, then unscrew. It will hold it's shape. cut out the final shape with a jigsaw. The water butt won't work as It is deforming at the top.
P

I have bent 3.6 mm plywood (not birch, the cheap poplar stuff) to make a guitar case. Dry heat is what works.

For my tight curves I had to bend round a hot pipe. But for shields, clamp into your curve (ideally a bit tighter) and heat with a heat gun. You want the wood "Ouch" hot to touch. Scorching or flames means you're overdoing it Once cool it will hold most of the bend.

Glueing up your bent sheets should then be easy.
T

A very late reply to this. Obviously, while the client imposed strict deadlines at the start these went out the window shortly after as he got distracted by something else...
I ended up getting a long 3/4 sheet (600x1800x3.5mmfrom memory) from Wickes as that was the only open supplier at the time. I cut this into two 900mm sheets. Exterior grain was parallel to the length, so I assume the interior, thicker, grain was running perpendicular to this. Not ideal, but all I had to work with.

First off I tried the heat approach. Clamp the panel in a bend, heat up (to about scorching) and then cool. 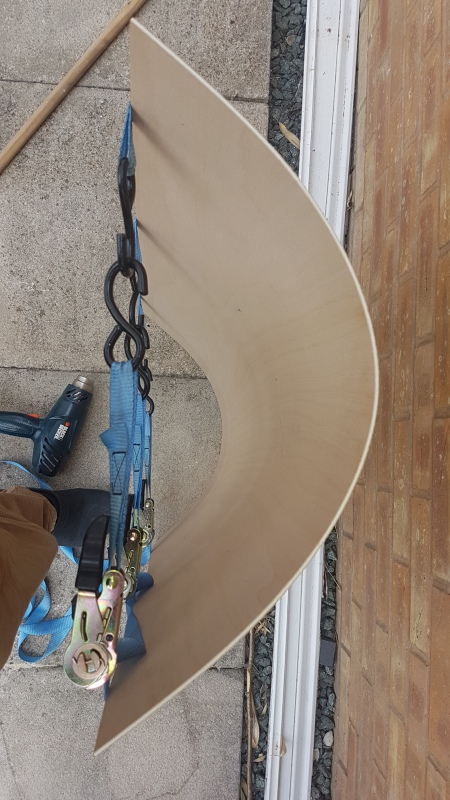 After unclamping most of the bend was lost. 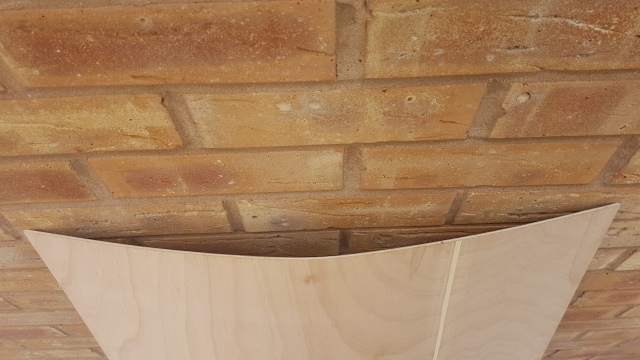 So I proceeded to go back to the original approach. Coat with Glue (Gorilla Wood glue from Screwfix, as again supplies were limited). Quickly strap against the waterbut but with more cauls this time. 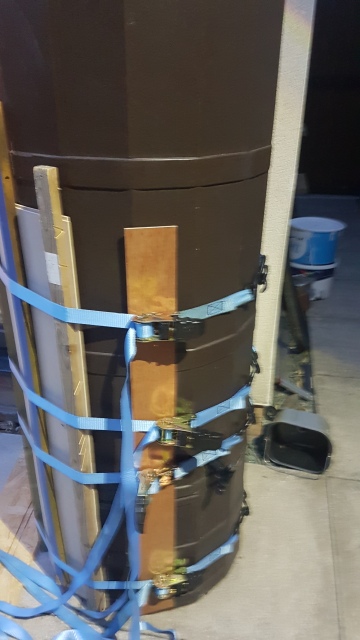 Left it to cure for 24 hours and then removed the straps.
Success. A few minor voids at the top/bottom where perhaps I should have had another strap, or even horizontal caul. I could have cut them out (as I don't think they went too deep), but I left them as they can be covered over. 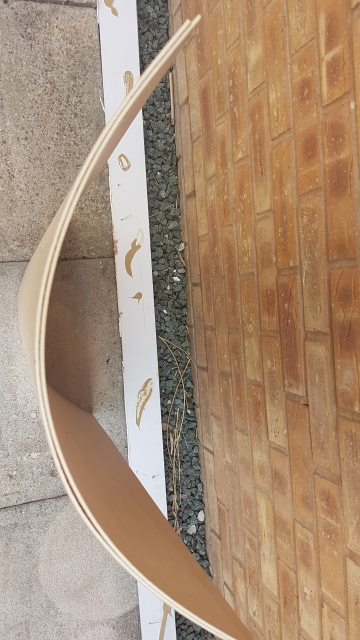 The edges were trimmed and I cut out 2 D shapes in the centre for the handle, and then glued a left over piece of ply to laminate the handle. 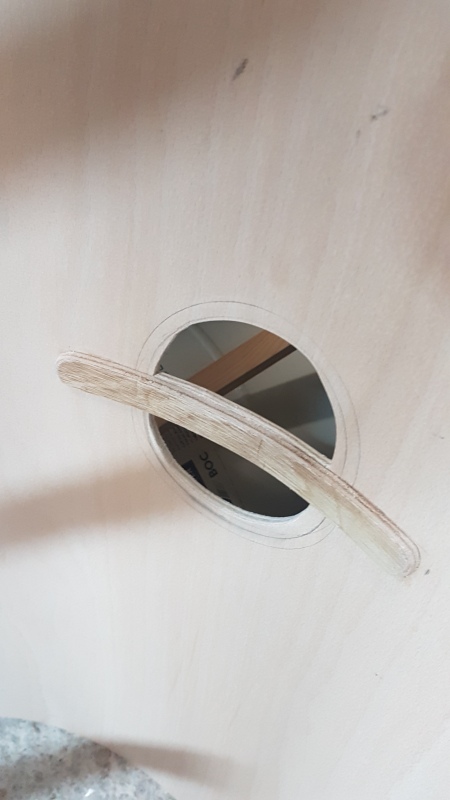 Generally sanded and smoothed. I then stuck and molded foam to make the boss (I had some already, but bought some cheap interlocking playmats for more). I made the curved boss by using a heat gun and the inside of suitably sized bowl. I stuck that on with Impact Adhesive and then moved onto painting.

I didn't have the right colour paint suitable for wood surfaces and nothing was open. The foam boss needed a flexible paint. I already had some liquid latex so used that mixed with childrens poster paints. This worked for the foam but didn't bond as well I hoped to the wood (despite a base layer of PVA). It stuck quite well, but then started to come off in places when I removed the masking tape used for the patterns. I will replace it at some point, but the client is happy enough at the moment. 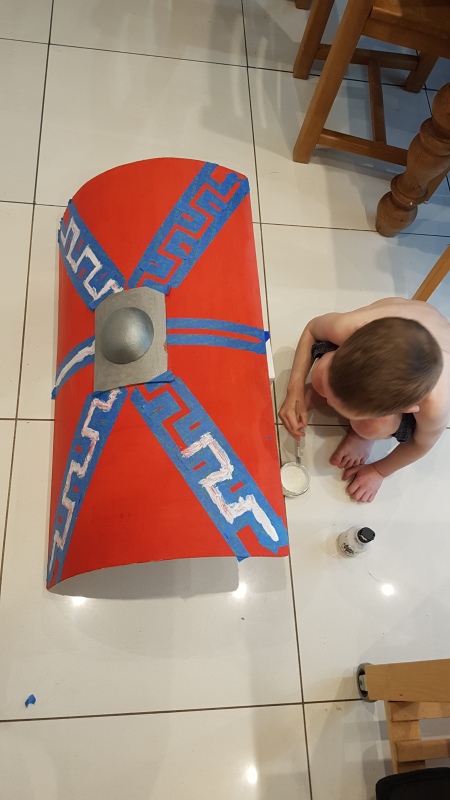 So you're shielding; there could be a market opening here
I

All you have left to make for Caligula Maximus Pestius there is 1 x lorica segmentata, 1 x Pugio, 1 x Gladius (Pompei the easiest to make, Hispaniensis the nicest looking), 2 x Pila, 6 x Plumbatae, 1 x Galea. Should keep you busy during lockdown. Nice Scutum by the way

Bet he'll have a lot of fun with that lot
J

Droogs,
Thou knowest far more than I, or speakest the largest scrotumiest!

Droogs said:
All you have left to make for Caligula Maximus Pestius there is 1 x lorica segmentata, 1 x Pugio, 1 x Gladius (Pompei the easiest to make, Hispaniensis the nicest looking), 2 x Pila, 6 x Plumbatae, 1 x Galea. Should keep you busy during lockdown. Nice Scutum by the way

Bet he'll have a lot of fun with that lot
Click to expand...

Sounds like the ideal kit for social distancing!!
G

Excellent! And a happy client. Though I've a suspicion that Mrs Mum-of-Client will be less happy if client is not careful with paint

Droogs said:
All you have left to make for Caligula Maximus Pestius there is 1 x lorica segmentata, 1 x Pugio, 1 x Gladius (Pompei the easiest to make, Hispaniensis the nicest looking), 2 x Pila, 6 x Plumbatae, 1 x Galea. Should keep you busy during lockdown. Nice Scutum by the way

Bet he'll have a lot of fun with that lot
Click to expand...

I built a set of Lorica Segmentata out of Cardboard for last World Book day. Pretty accurate it was too - I perhaps got too involved and based it on the plans the Legio X re-enactors use and some historical documentation. One wooden Pila from the Roman Legionary museum in Wales. Just a Gladius to make, I'm going to ignore the Plumbatae and Galea. and hope the client doesn't mention them.

at least he didnt want to be cavalry and you had to make a set of lorecum squemata. Still would be good practice for roof shingles if a bit on the small scale (ha ha pun intended). As for the galea just give him an old glue pot wear
You must log in or register to reply here.

A
a stockist that sells pre-lacqured birch ply?

A
Repairing a competition race truck