Jacob said:
Try asking one?
Friend of mine is food technologist and was a butcher in a family of butchers. He said they sharpened all knives with steel alone and had done for generations.
I didn't ask about cleavers and such, I guess they'd need a medium/fine stone.
Click to expand...

Must've been a serrated steel.
J

Wow I didn't think this thread would have such legs and reaches well beyond the tools I had thought of!

What kind of men’s shed is it? A small one devoted to small things with hand tools will have different needs to a group making cabinets, book cases, tables and chairs verses a group of mainly wood turners. A place with all will need pretty much everything at a greater cost.

The shed in starting is at a mental health charity in Spipley, clients have multiple conditions.

However i try to avoid bird tables and boxes!!

I have said to the chaps we would make them each a tool box / caddy to stretch their skills!

We have a few more skilled guys but they are mainly at my Baildon shed.

Tool caddy? Just started putting this one together in the states where I am, the other two pictures are of my UK one which gets brought out of the tool cupboard every day, the other thing that is on there that I don’t think has been mentioned is a nice hardwood wedge, very useful when hanging doors. Ian 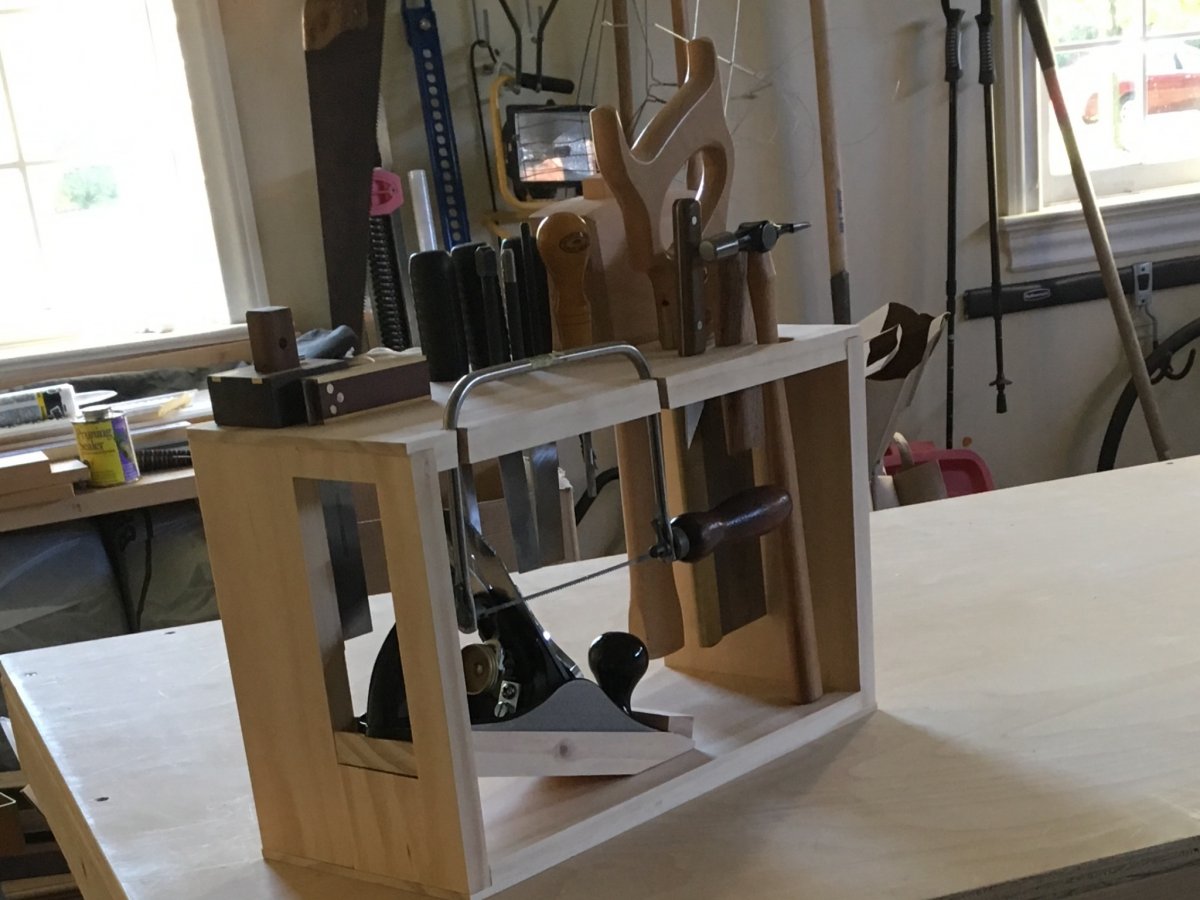 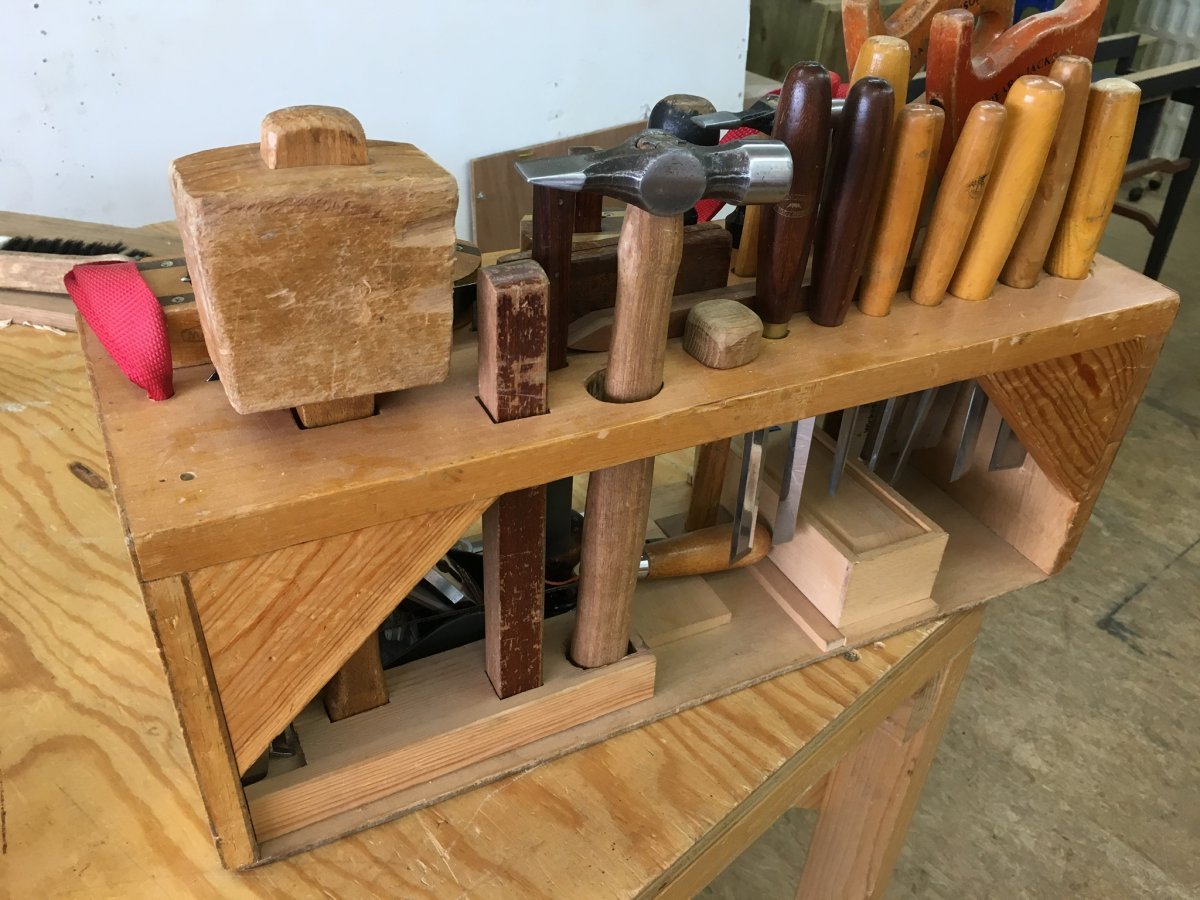 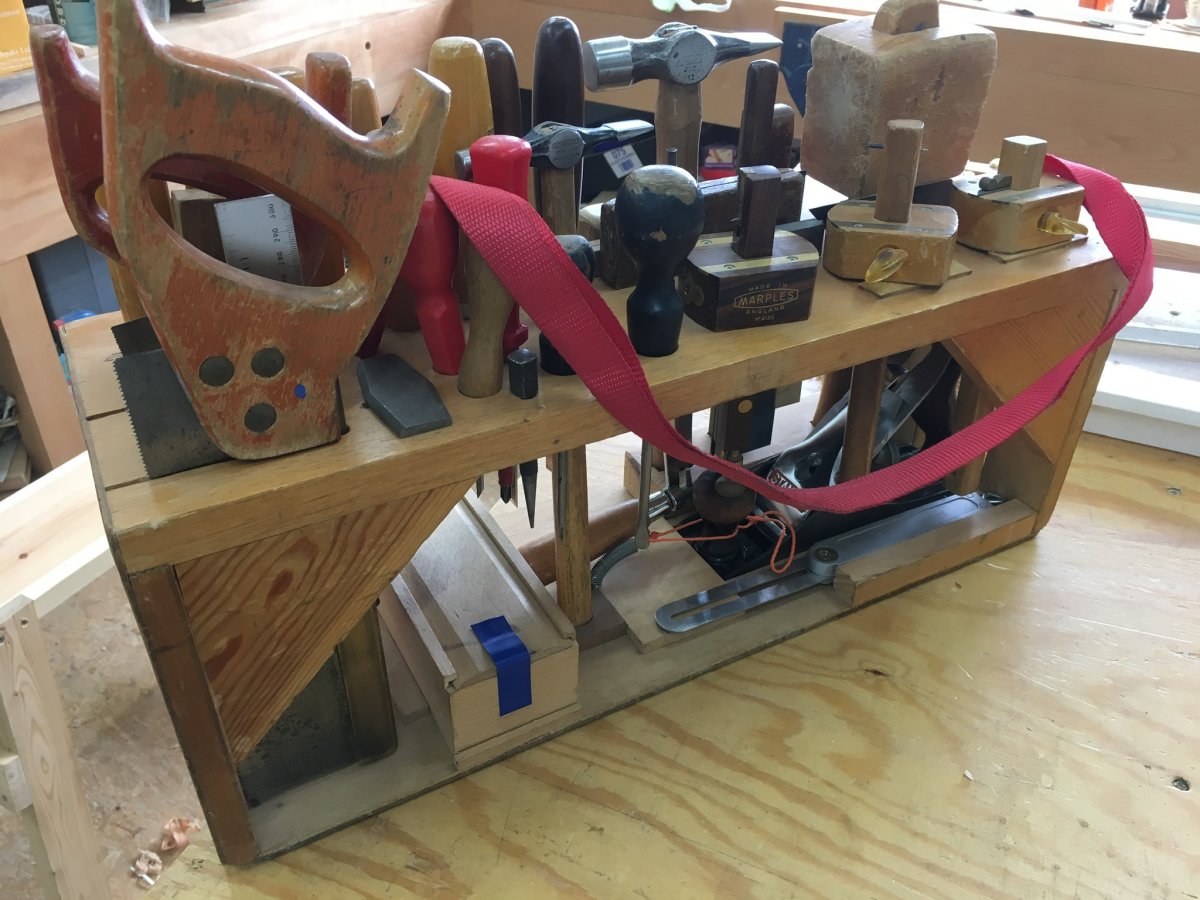 Im looking at a Stanley No4 to replace my old marples replaceable blade plane that along with an electric plane (a vicious beast!) has done me up till now, anyway I was looking at buying an old Record and found this Stanley for sale at £20, would people mind taking a look at the photos and giving an opinion, I seem to have read that some of the most modern offerings are poor quality? I questioned if this one had wooden handles as they looked a bit plastic to me, but he has confirmed they are wood,,any thoughts appreciated 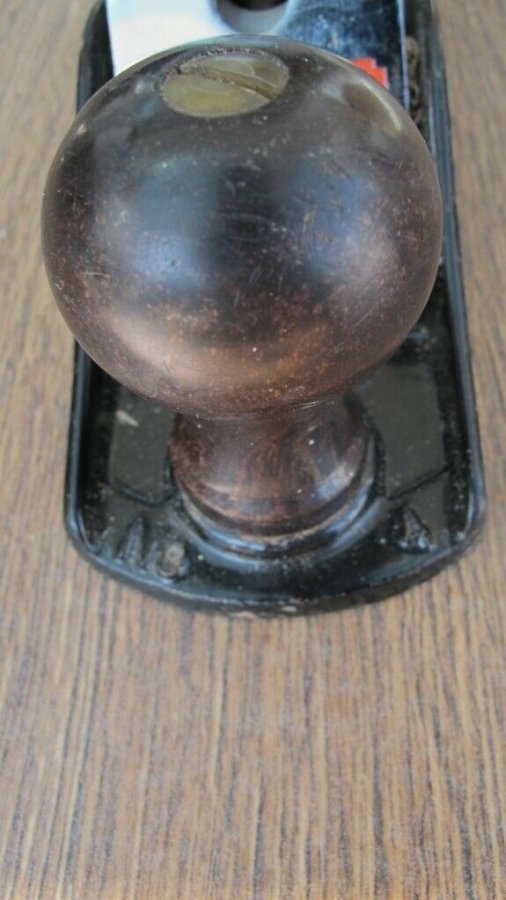 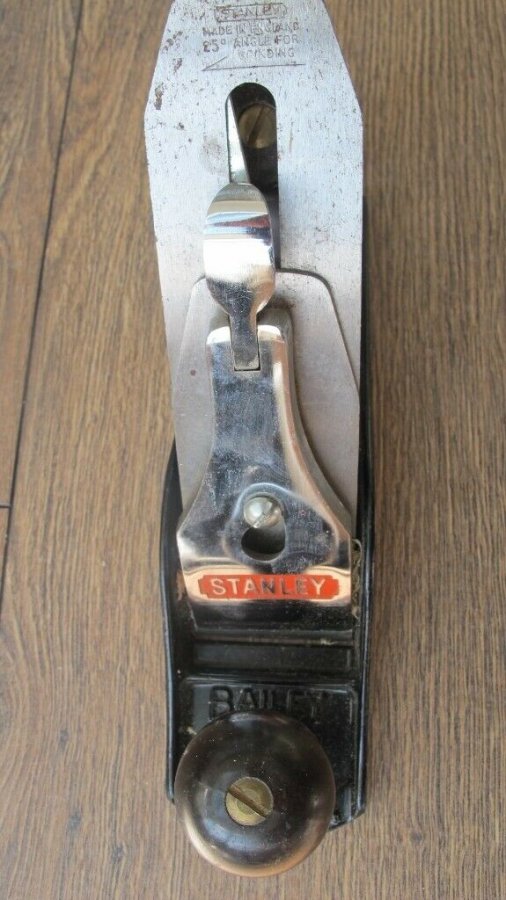 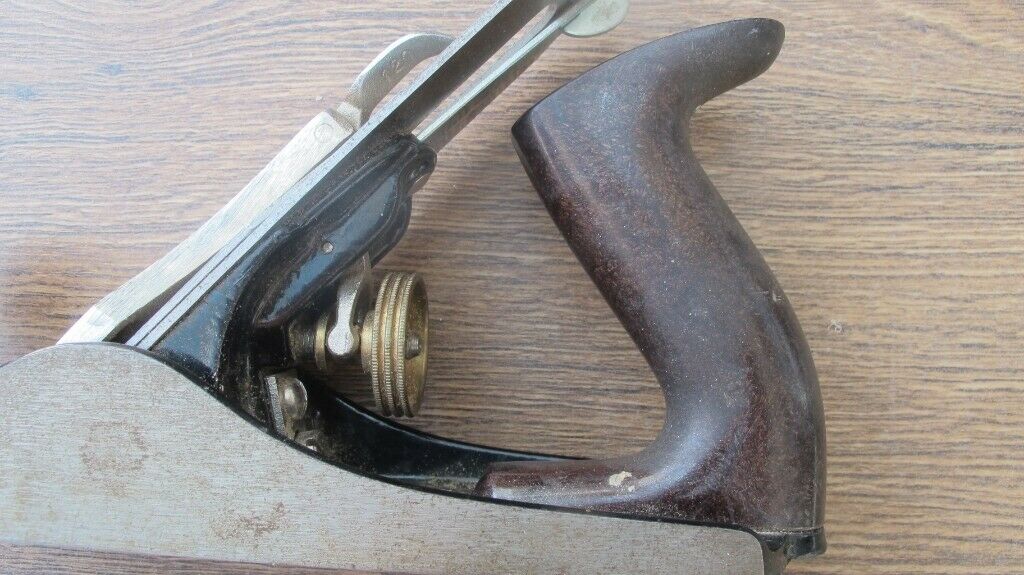 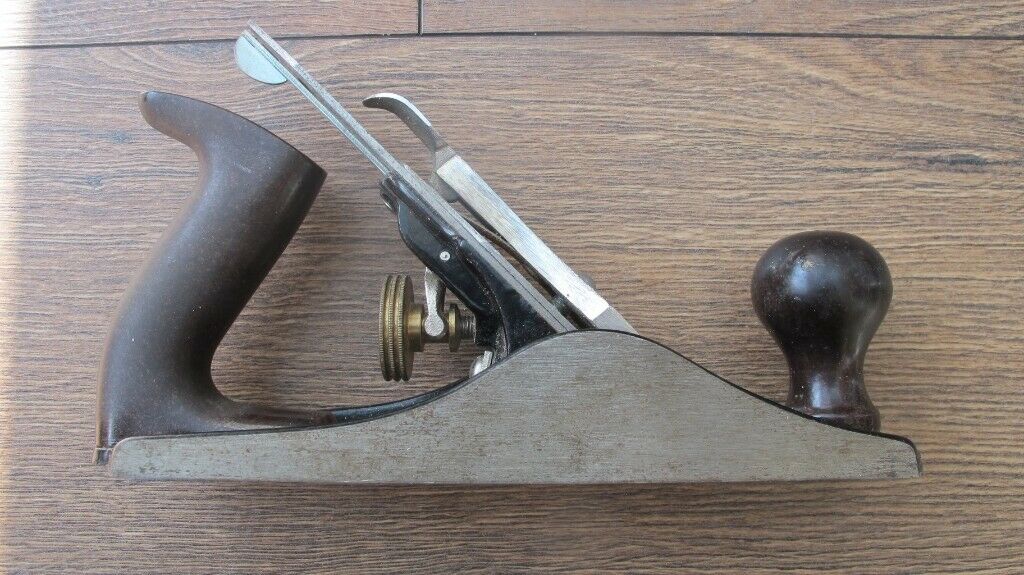 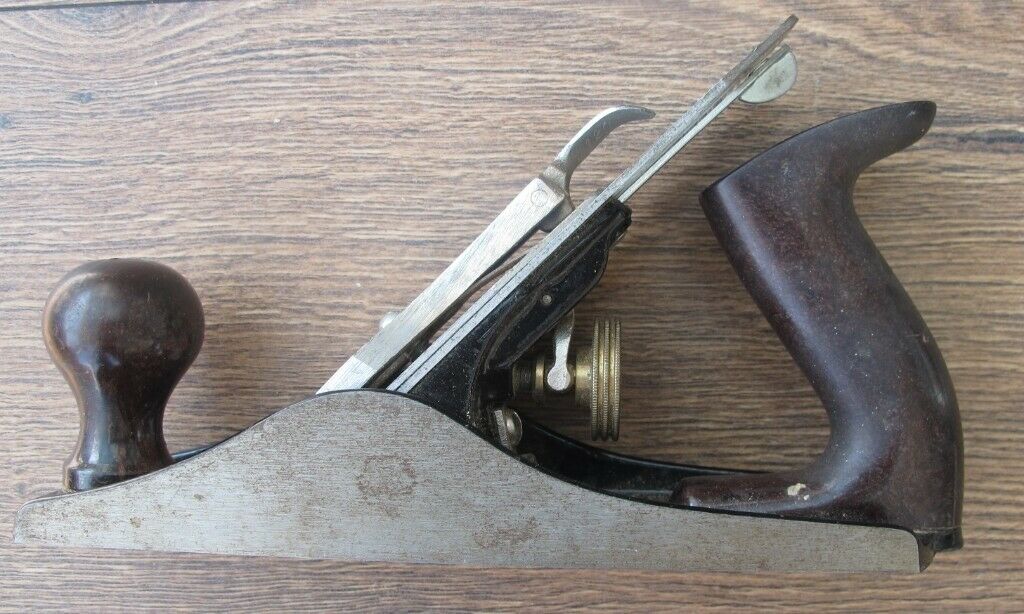 Looks genuine to me!

Look plastic to me too.
The 4 pic down looks like the sole has a radius to me, which I've never noticed from a photo before...
Could be a camera playing up.
I'm guessing its the ones which would suit a small scrub plane, as the mouth is nice and large.
similar to the cordovan stanley planes.

I would be on the bay and find something for the same money else personally.
Tom

I've got one the same with plastic handles. It's a very nice good quality plane and you would hardly notice the plastic. Not all plastic products are cr ap.
This one looks in good condition too.
Oi give it foive!
It'd be great shame to try to turn it into a scrub plane.
Last edited: 19 Sep 2021

I meant that you wouldn't have to do any filing as the mouth is likely very large already,
(Not saying that it would be a good idea to take a file to any mouth of any Bailey plane.)

I can't fault the plastic handles either TBH, I've even picked up the wrong 4 and used it a few times.
And not saying that it couldn't make a good smoother either.

If that picture is accurate, it means a lot of spot working of the middle to make a good smoother.

Jacob said:
I've got one the same with plastic handles. It's a very nice good quality plane and you would hardly notice the plastic. Not all plastic products are cr ap.
This one looks in good condition too.
Oi give it foive!
It'd be great shame to try to turn it into a scrub plane.
Click to expand...

They don’t look plastic at all to me, and it looks to be a fairly decent plane so go for it.
I have a plastic handled one in the states but it soon fettled up and the plastic feels not too bad at all actually, turned out to be nice to use which for a brand new one really surprised me. Ian

Cabinetman said:
They don’t look plastic at all to me,
Click to expand...

and it looks to be a fairly decent plane
Click to expand...

It is.
Just checked - mine is identical except its a 3 not a 4.
The only clue to it being plastic is a moulding seam across the top of the handle but otherwise perfect.
S

Well plastic or not it does look as though I should be giving it a go,,
Many thanks everyone and if I get it I will check the handles and let you know what I find,,
Steve.

they are plastic handles, I got a similar plane and made my own handles for it, well worth taking the time to do it, you can use turning blanks.
L

I don't think that Stanley used plastic handles on planes with brass adjusting knobs and assembled lateral levers (as opposed to lateral levers that were bent into shape). It also seems to have the forged yoke; another plus! The plane looks good to me; well worth £20! (And if there is varnish chipped off the handles, then they're wood!)

They did. I've got one and Stevekane has posted pictures of one above.
Perfectly good quality too , and at first glance it looks like rosewood with an oiled finish.
C

For information, the one I bought last year in the US has plastic handles a "bent" lateral adjuster cast yolk and surprisingly a brass depth adjuster. It cost $60 about £45.
D

Stevekane said:
Well plastic or not it does look as though I should be giving it a go,,
Many thanks everyone and if I get it I will check the handles and let you know what I find,,
Steve.
Click to expand...

I have one with plastic handles - had one before. If there's a seam, just scrape the seam off. The handles aren't at all uncomfortable otherwise, even if they don't have the looks most want.

The most recent one that I had came with significant flatness issues (surprisingly, it was hollow across its with, and almost dead flat end to end). A 5 that I had in the past had no such issues (my recent one was made in mexico).

I had one maroon casted version from England that had an adjuster that was too fat to fit in the slot on the iron, but otherwise, they've been pretty good that I've had (if they need a little flattening, they're not big planes so no problem).

The irons (both in the english plane and the mexico plane) are actually pretty good - better than the ones that were in the planes in the 70s, which are really the only ones that are really soft.

From what I can see from these pics it looks like an older model - is there a screw in the front toe of the tote? If not then it is definitely an older model and the tote may be tad loose as a result (I have one and despite taking a smidge off the tote bolt is has a very slight movement (like a slight click) every time I pick it up but doesn't affect its performance at all. The varnish they used can make the the knob and tote look like plastic but I'd ask the seller if it bothers you. I am erring on them being wood. If it's wood then you can scrape off the varnish with the side of a chisel, sand and apply several coats of shellac or boiled linseed oil.
You must log in or register to reply here.
Share:
Facebook Twitter Reddit Pinterest Tumblr WhatsApp Email Link