I've been using a cheapish secondhand bandsaw (10" SIP) for a while, and it's been doing OK for me. I recently bought Steve Maskery's Bandsaw Essentials DVD, in which he goes to some lengths to explain why a bandsaw crosscut sled wouldn't work (short version: because you need to align the motion to the angle of the blade) and it set the gears moving a bit, so I came up with this thing: 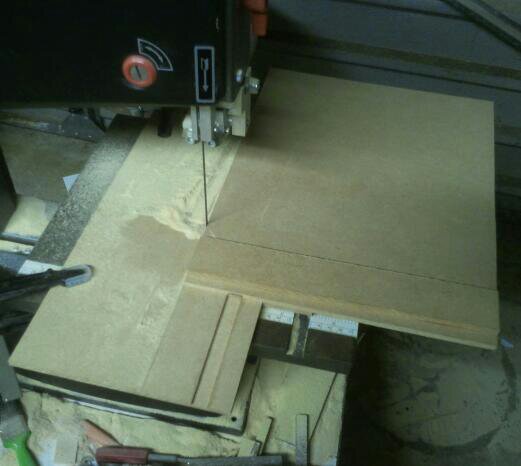 It's fairly simple (to the point that I expect I don't have to explain it for most of you lot, but I'm going to anyway): there's a 6mm base sheet of MDF with a slot routed into it; a line is drawn onto the board parallel to the slot at distance X, and this line is cut along with the saw to about half-way, then clamped in place at the angle of the cut. A second board has had a similar slot routed into it at a distance greater than X, with an oak runner (I happened to have some oak spare with the same width as the router bit) glued into it, which slides along the slot in the base board. I slid this sled all the way along the slot with the bandsaw running to cut the left edge, then glued the offcut straight-edge-forward at the back of the sled square to the edge.

Now, I've found it had a transformative effect on my bandsaw - I'm getting perfect square cuts every time with little to no hassle. But - probably thanks to its construction - it's not the smoothest slide ever (it was a choice between "a bit stiff to slide" and "wobbles in the slot", naturally) and I'm wary that when I next change the bandsaw blade I'm going to have to carefully trace the line of the previous cut in the baseboard to re-align it, or just give in and make a replacement base. On top of this I carelessly didn't make the base as wide as I could fit in the mouth of the saw, so the clamps it's held down with get in the way of clamping a block of wood to act as a fence for resawing, limiting the depth of cut. Obviously I can't use the bandsaw's existing fence, but the only advantage the bandsaw's existing fence had was that it was aluminium and thus fairly smooth, so that's not a huge loss.

So, does anyone have any advice for improving this? I'm not sure what I could do to make it slide better, whether I might be better off giving up an extra couple of centimetres of height and installing bearing-runner tracks or something? I have some old-but-not-useless bearings lying around, it wouldn't cost anything other than height and lateral space. Would that be accurate enough, or would that end up with too much play? I'd worry that lifting the cut too far off the table might make it less accurate, as well, and certainly add more potential for breakout on the offcut piece.

I'm also considering a couple of machine screws countersunk into the base board, butterfly-nutted into a bar that clamps under the bandsaw's table to avoid (using up my precious clamps and) getting in the way of fence-clamping, which I hope should be sufficient... any other ideas?

Of course, "buy a far better bandsaw with an angle-adjustable fence" is one answer, but in terms of cost-effectiveness that's not really an option until I outgrow the power and/or cut depth of this saw. Obviously it'd be preferable to be able to set the blade up dead parallel every time, but if it's even possible it's beyond me; some blades don't seem to fit in the guide bearings unless they're riding forward on the wheels, for example. Sooner or later I'll buy myself a small table saw anyway (I've been watching Kity 419 ebay auctions for a while, and eyeing the TS-200 from Axminster), but I do like the relative safety of the bandsaw!

Thanks for your post, I myself do not work in my workshop during the winter months but I will reopen this thread next spring and study again, I am getting a bit ancient for working with a tablesaw.
J

The problem I have with my bandsaw(Ancient Inca with uncrowned wheels/tyres) is that every time I de-tension and re-tension the blade(which is pretty much every time I use it, as I am an occasional user), the alignment is altered. I have considered making some sort of cam-based quick-release mechanism, but I don't know if that would solve the problem entirely(or if I'm capable of designing and making such a device).
M

With regard to using the jig again with a different blade you could rout a stepped slot along the line of the initial cut for an insert, then when you change blades you just put in [and cut] a new insert. I would have thought that if you try to reuse a previous cut you would lose the offset accuracy [if that makes sense]

monkeybiter":4t4rpok9 said:
With regard to using the jig again with a different blade you could rout a stepped slot along the line of the initial cut for an insert, then when you change blades you just put in [and cut] a new insert.
Click to expand...

My concern there is just that as it stands now, it might take more time and effort to make a new insert than it would to make a whole new base piece - after all, all I need to do for the base piece is cut a big-enough piece of MDF, rout a slot Xmm from one edge and draw a line Ymm from the slot (which I can reference off the edge of the sled, even). For an insert, I'd have to cut at least three sides precisely and rout a step into them.

On the sliding front, I believe that the stiffness is mostly caused by friction binding between the sheets of MDF, so I've obtained some UHMW tape to see if that lives up to its reputation... it's a lot easier than building bearing-runners, and takes up less space, so it's worth it for a first try!
You must log in or register to reply here.

question on how to cure minimax s45n blade drift

Do you need bead