I recently purchased a used table saw, basically to try and see how I got on with one, before splashing any serious cash on something better.

I've yet to actually switch it on though, because the seller also chucked in a band saw - which he said "doesn't work but I know what the issue is, the wires to the switch needed taking off, contacts cleaned then put it back on" - now I know this sounds too good to be true and as soon as he started talking I was thinking "the motor's blown" but I do love tinkering around and trying to repair things, so I took it.

I tried as he suggested but, predictably, no joy. looked online and found this forum and some similar issues but none quite the same. So i thought it's probably best to just ask! 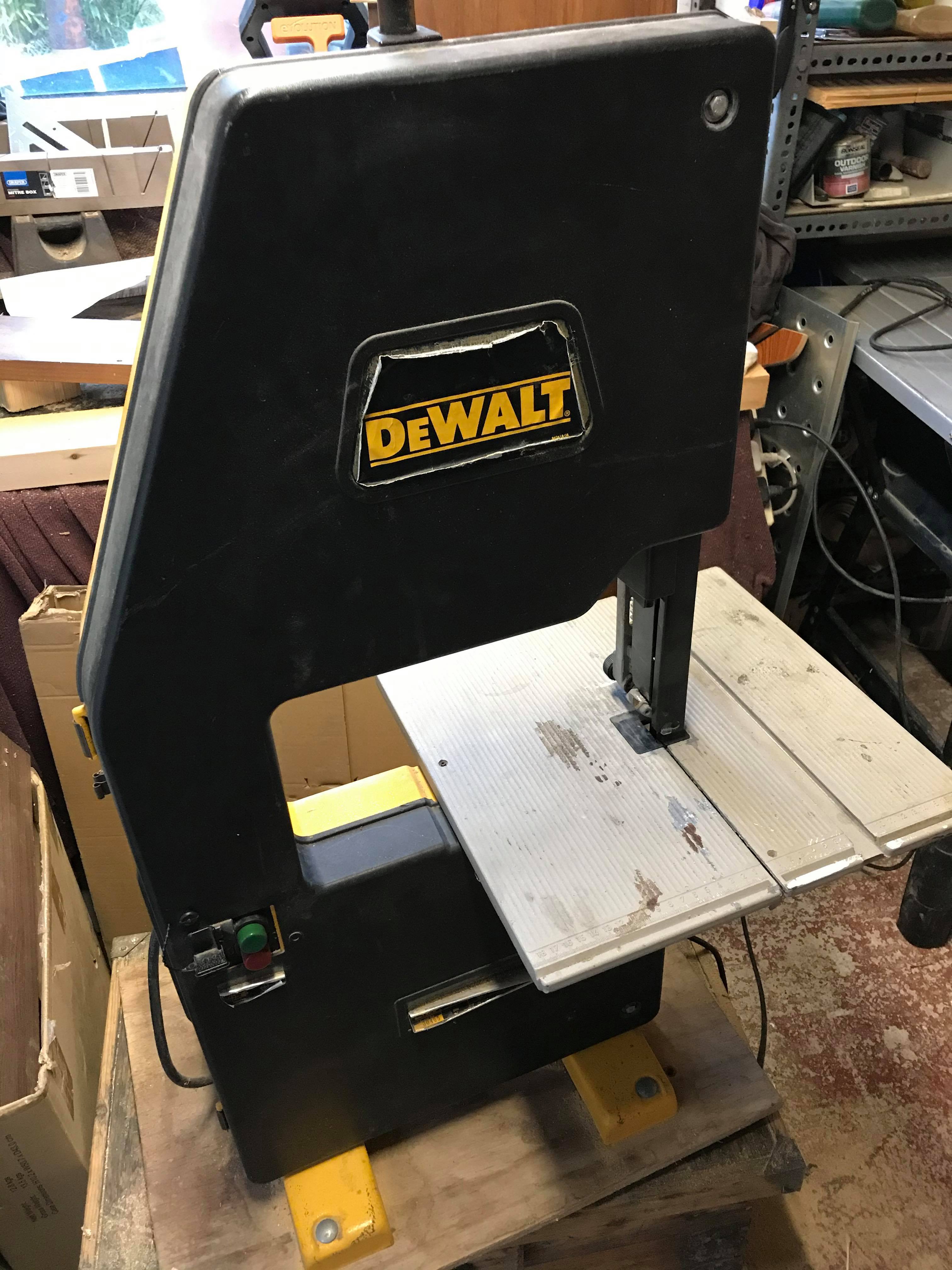 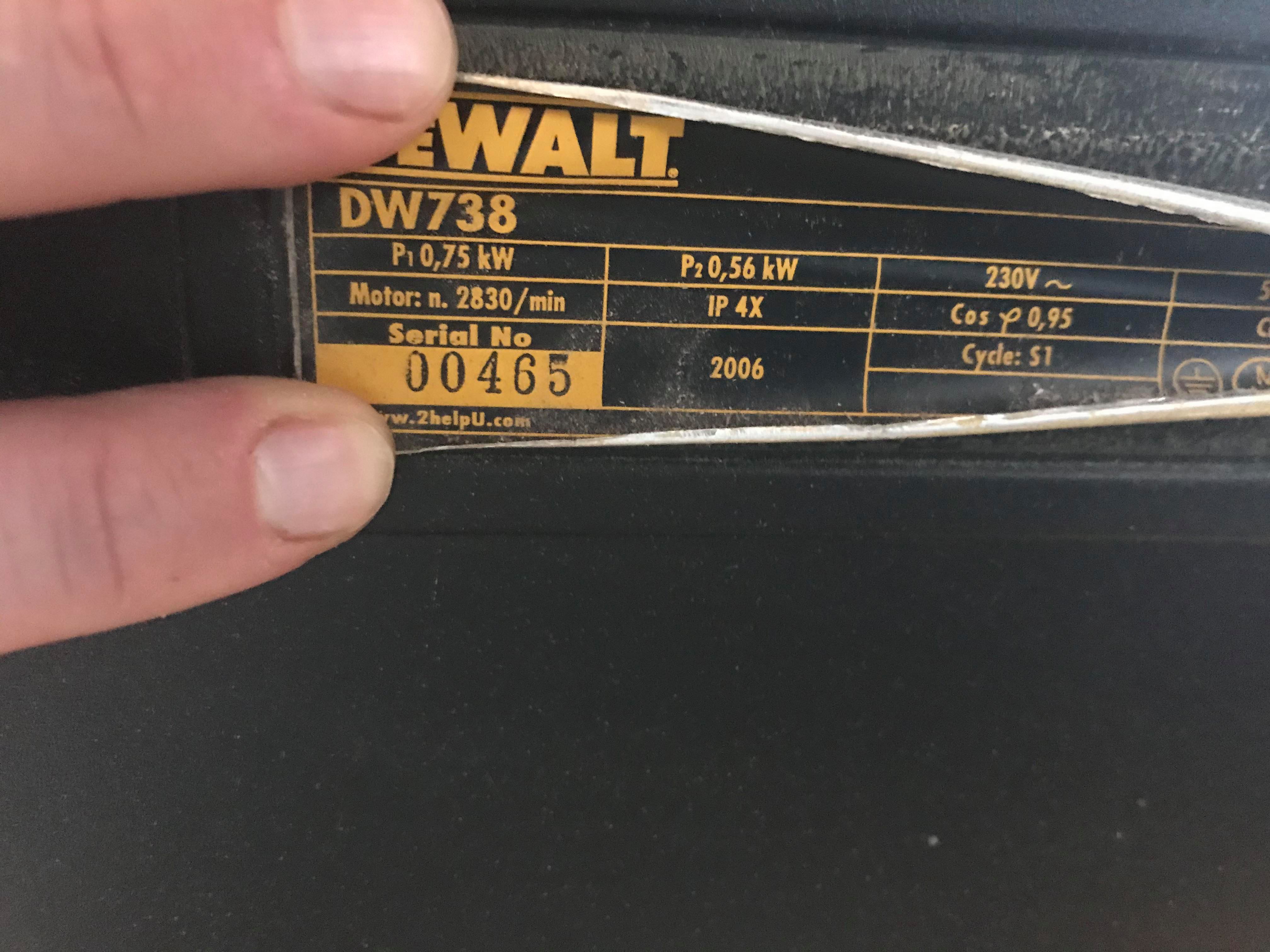 I plug it in and literally nothing happens, put safety key in, push green button, nothing. 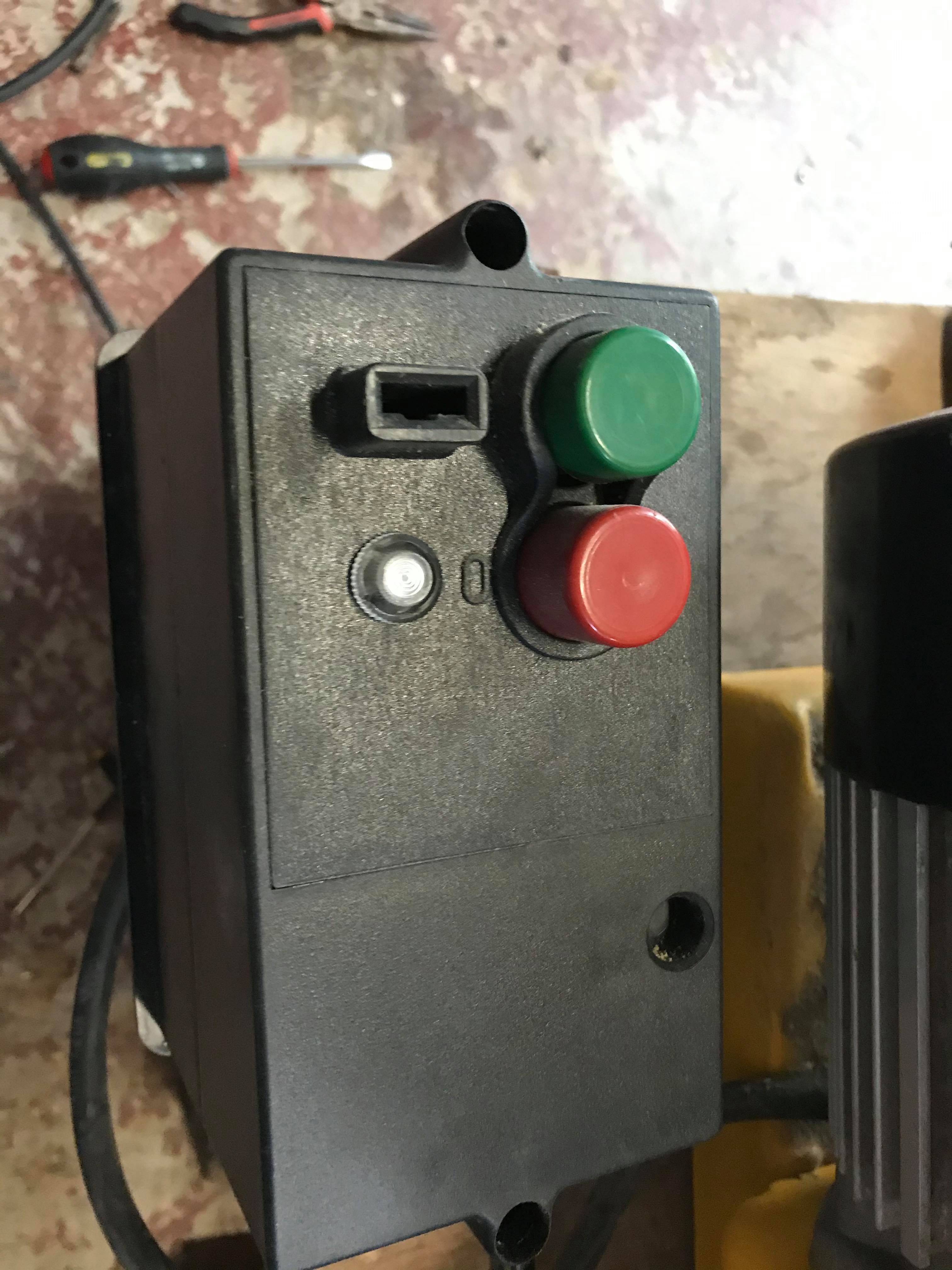 - Fuse in the plug.
- checking continuity with a multimeter and as far as I can tell everything is hooked up correctly to and from the switch.
- opened the main section of the saw (out of curiosity more than anything) and slackened the blade and moved the wheels around, just generally inspected it, other than a load of sawdust inside that i cleaned out, it's in pretty good shape. 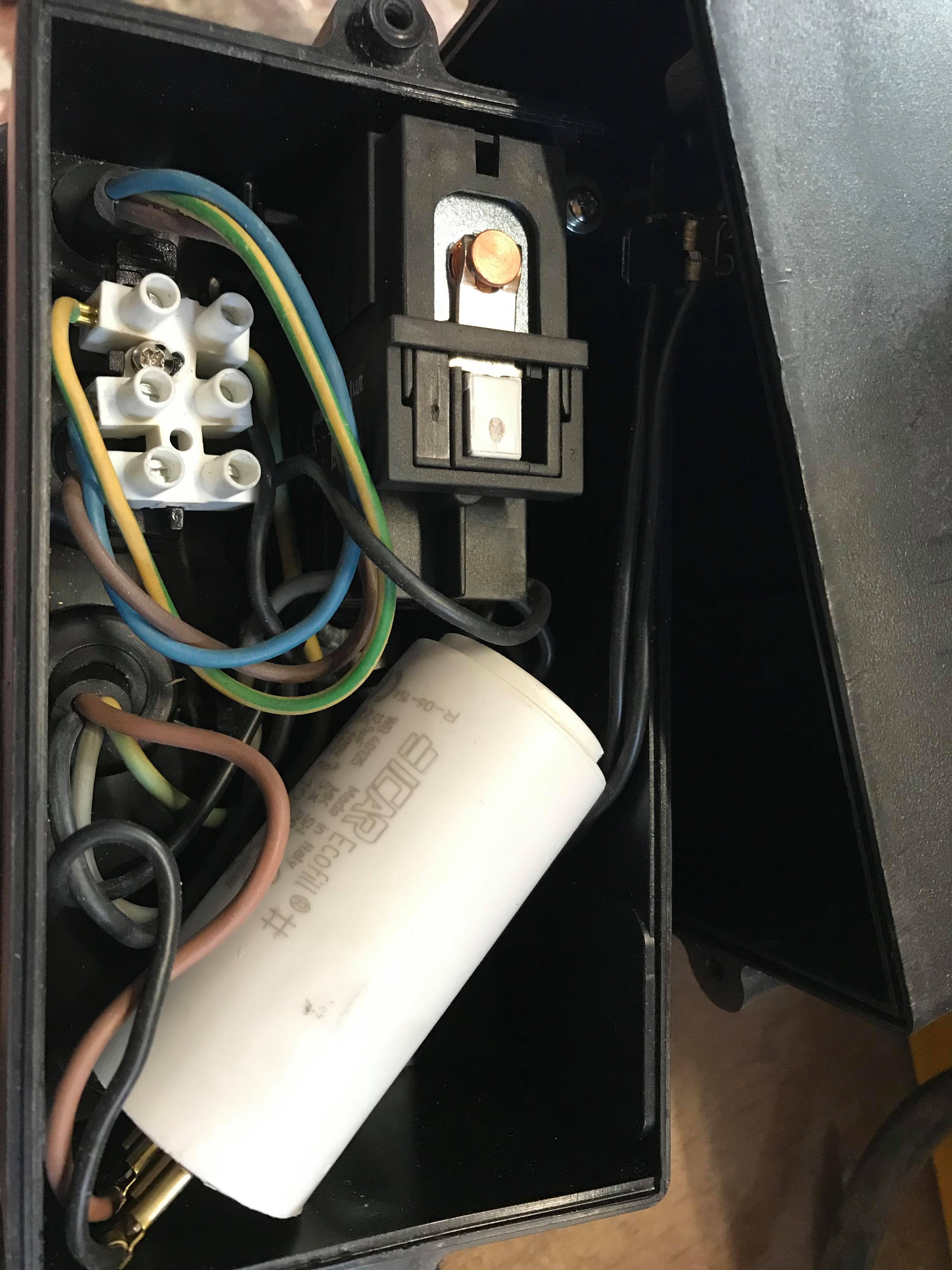 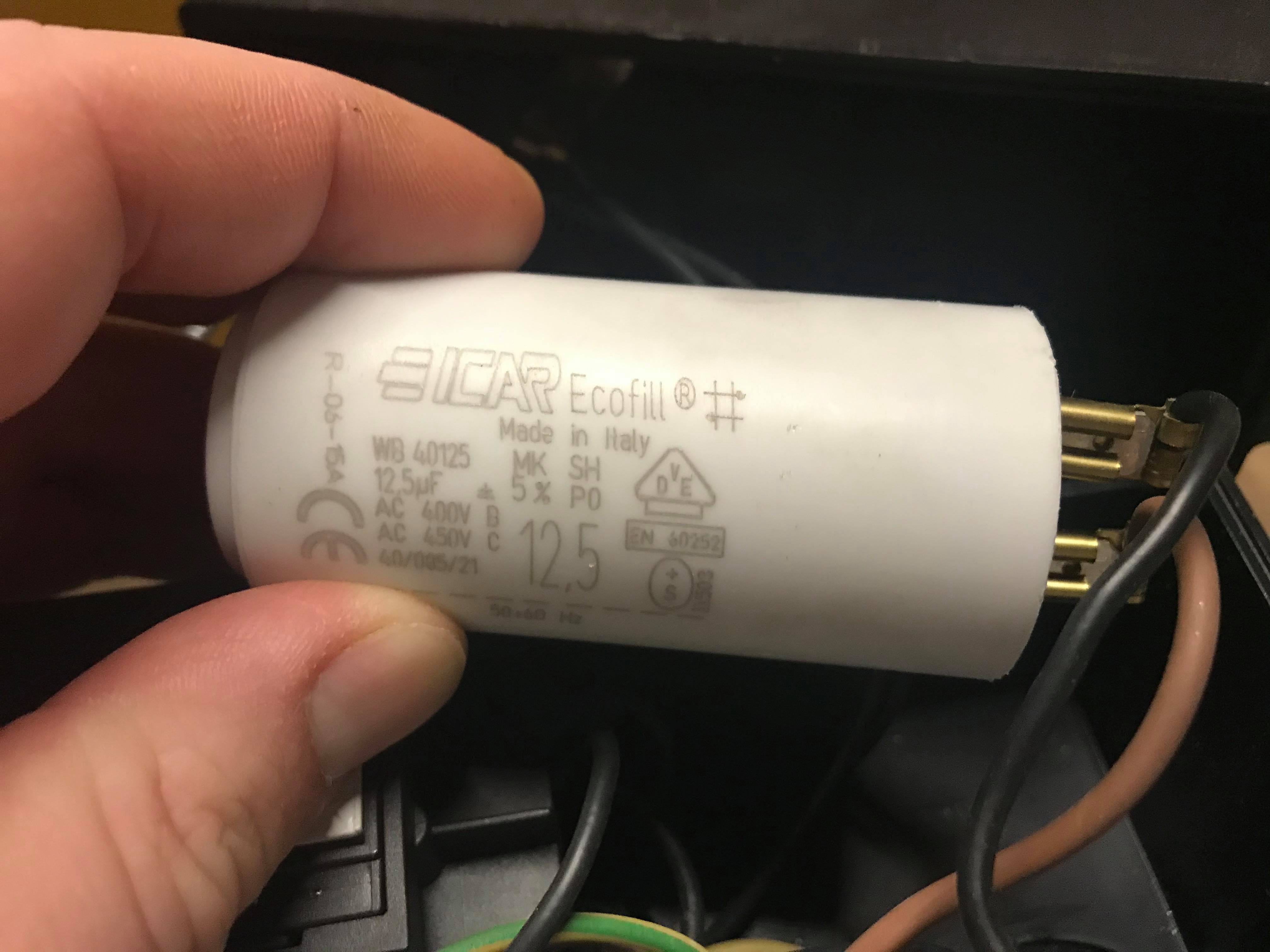 From what I've read online so far i'm still none the wiser... if anyone has any suggestions of likely issues, please let me know

There should be a safety switch on the door so it can't be switched on while it's open, worth a check of that.
K

Interesting, thanks I’ll add that to my list of things to check!

First off, check the data plate on the motor.
K

finally figured out how to upload pics! I've added them to the original post

Most certainly single phase 240v. First job, check / substitute the starter capacitor. If you have a multimeter check the windings.
Worth ( if you feel safe doing so) bypassing the switch. Whilst you are checking it out, it might be worth removing the blade!

12.5 mf 400v motor start capacitors are about £6 on ebay. ( note the safety margin on the working voltage)

Cordy needs glasses, and thats for free advice :roll: :lol: :lol: :lol: :lol:
That starter switch is way over the top. It must have come from a naughty boys home.
I cant quite read the capacitor value on the motor plate. Is it the same as printed on the capacitor?
If not, thats the answer.
Is that capacitor smelly? get up close and personal, they usually show melting or stink of burning. But NOT always.

Take the capacitor to an electrical wholesalers and ask them to test it for you. Keep shtum, dont waffle, pretend youre a sparky whos left his test meter at home (they are not obliged to help non trades, and they are even prevented by law from giving you advice because none of them are qualified). If its broke, tell them you want a new one.

Don't take any thing anywhere I think you need one of these.

It fits into the slot next to the push buttons.

oops looks like you have one, is it fully pushed in?
K

thanks all, some good info/advice in here. Yeah i'm pretty confident i can bypass the switch to then give a quick test and see if there's any difference.

The capacitor looks fine, nothing obvious, no burnt smell or anything. Again it's worth trying though.

If I get nowhere with the switch I think I might drop it round to my Step-Dad as he's good with this kinda thing (I was just kinda hoping I could do it myself!)

Are there any microswitches on the machine what a door or cover is opened?
K

marcros":c4stytb7 said:
Are there any microswitches on the machine what a door or cover is opened?
Click to expand...

not that I could see, no.
K

Racers":2jg5i5qz said:
Don't take any thing anywhere I think you need one of these.

It fits into the slot next to the push buttons.

yeah I took it out again before taking pics... just to trick you!

The safety keys are known to be temperamental. Check yours against the ebay picture.
O

owen":2o6vslst said:
I've got a larger version of the saw and there is a small safety switch inside the door on the hinge side, i have stuck a sliver of wood inside the door on mine because it wasnt making contact. May be the same for yours?
Click to expand...

nope, no switches or wiring inside...
K

I woke up this morning (band saw blues?) thinking about the safety key and how it works and decided to go and take a quick look... my exact thought was "how can that possibly do anything?"

I took the casing apart again to get at the wiring and switch etc but this time pulled out the plate that holds the buttons themselves and the safety key hole, as I did a spring fell out. I pulled out the plastic piece that engages with the safety key and blew any dust out from inside (in case there was anything preventing movement) put the key in and out a few times to see how it moves that piece.

The spring holds the plastic piece in, which prevents the on button from being pressed fully (enough to contact the switch) when the key goes in it pushes the plastic away from the button and compresses the spring... so when you take the key out the spring pushes it back to 'safe'

put it all back together and she lives!

Thanks for all the suggestions everyone, I've learned a bunch of things to look out for in future

What the others said about the key. I had a previous version of the Dewalt a 3501 with the same key. There were no additional safety switches anywhere on mine as the key itself was tethered and had to be pulled out to open the door so a bit crude. The key was a known issue as the machine can't be started without it and it must be inserted the right way around - it was possible to put the key in the wrong way especially as it got worn being soft plastic.

If the saw was mine but only because I have enough knowledge to do so, my first action would be to bypass the switch to see if that's the issue but please only do that if you're competent otherwise ask someone who is
B

Great result =D> Can I suggest the next thing you do is order a blade from Tuffsaws, it will transform the saw!