thetyreman":6fte0v76 said:
what if you wanted to take it apart again?
Click to expand...

It's able be taken apart, part of the design in the first place.

The legs are glued together, the bearers screw and glue to the top of those. The aprons are then secured to the legs with the wedge which will only get tighter if there is movement and its hammered home in the first place.

The top is glued to the front apron, then the top and we'll board are screwed to the bearers.

Finally 4 bolts just ass as extra insurance to hold the aprons to the legs. 4 mag bolts can also be used a but higher up to add a bit more.
T

Soon be time to fit the vice, eh!!

Tasky":1tqpkqfu said:
Soon be time to fit the vice, eh!!
Click to expand...

Yep, maybe this weekend with a little luck!

Got the legs glued up today so tomorrow I'll reassemble and see about getting the top glued to the front apron, then its cut the wellboard, plane the whole thing a bit closer to flat and then I can get the vice in. It's taken so long. Curses!

Also today I bagged up all the shavings so I can at least walk around in there now.

Some said he was dead, others that he had lost his interest.

No, just life got in the bloody way.

It's under that lot somewhere, honest. 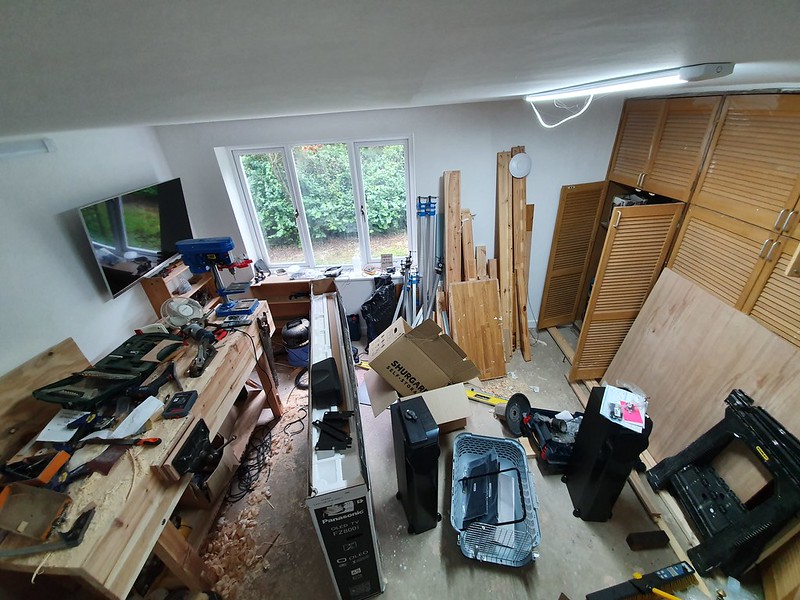 I've been beavering away with odd jobs as and when needed, yet have I to find the time to do things I want to do in there, like add some shelves at the end of the bench, a drawer, a rear tool shelf, hell, even finishing the damned thing!

I have to say though, a year after it was finally built and in useable state, it's made my life so much easier doing all sorts of jobs. Pipework boxing in, making shelves, adjusting some oak double glazing units, all made far easier just by having the bench/vice there and the tools to do what I need to do.

Sadly in the next 12-18 months I'm going to lose the indoor workshop, and the wife and I have both agreed my plans for an outside workshop are best shelved (as I also want a garage :mrgreen: ) and instead well head in the direction of a double of triple timber garage from somewhere like Warwick Buildings.

In the meantime the shop will have to be moved down the other end of the driveway to my inlaws place so still accessible but not nearly as handy.

With a fair bit of time off coming up I'll try and actually update the thread a bit more as (if) I actually do anything to it.

Today at 00:08
Torx
T
B
Roubo Workbench Build (Brought to you at SnailSpeed)