Only joined recently and loving the forum. Quite astounded by proper discussions going on in the general section that on other forums I frequent would be dragged down to shouting but that seem to retain proper reasoned debate here (unless I’ve missed the handbags moments thus far

I’ve researched making some alcove cupboards with floating shelves above lots online and just have some head scratchy bits left, that don’t seem to be covered elsewhere so I need the help of those that know more than I

Key issues I have are:

The house is 1930’s and suffers from condensation (previous owners helpfully closed all fireplaces without venting, covered air bricks etc. etc. – all of which is being sorted).

On the plan attached, the wall to the right is an external single-skin wall and is prone to condensation (fitted wardrobes upstairs on the same wall had some damp issues, not awful, but enough to be a problem) so I don’t feel that I can just box in the right hand side without causing problems. I also don’t think I can simply insulate on that side of the cupboard as that wall has a double socket, cable entry and phone entry.

I’ve also been torn between: Building a carcass on a plinth and fitting it in with fillets at the sides etc. which feels slightly trickier, but perhaps more ‘proper’ and would allow for easy fitting of Blum hinges which are my preference

or the (sorry, don’t know the term, but the ‘use the walls of the alcoves as the sides of the cupboard so you are essentially making shelves with a frontage and doors on’) method, which leaves the whole space open and perhaps gives better airflow.

My thinking thus far has been: as the right alcove is wider than the left, if I create a two-door cupboard for each alcove that match, then on the extra panel on the right alcove use a decorative panel/grille that allows airflow and pair this with a few holes in the RH side of the cupboard top?

So, carcass or the other way (can you fit Blum hinges the other way?) and is there any better way to stop condensation (having router and Virgin box in the cupboard will potentially create enough heat to negate issues but I can’t bank on that)

Around 50mm thickness seems about right and the widest span is 1170mm so I’m planning on making frame/torsion-box style topped with a thicker sheet and bottomed with a thinner one.

Given the span, would it be better to use ply or could I get away with MRMDF. I’m thinking 18mm on the top, 6mm on the bottom? Then for the front, making stripwood mouldings with my tracksaw from interior cladding (as per Gosforth Handymans’s tip video here How To Get Cheap Stripwood Mouldings - Gosforth Handyman)

What I’ve seen so far often just describes the frame of the shelves to be made of ‘batten’ but isn’t that specific about which type. Should it be hardwood for stiffness or can I get away with a softwood? Should I just be searching for ‘planed edge timber’?

Sorry, this is an incredibly long-winded post and I may not have been as clear as I might, but thanks in advance for any advice. Also, forgive my newbie Sketchup skills, it’s the first time I’ve used it, so it’s missing detail like the cupboard top overhang and the colours are off as I think I should have coloured earlier in the process. After tearing my hair out for a couple of hours I decided that colours I could live without this time 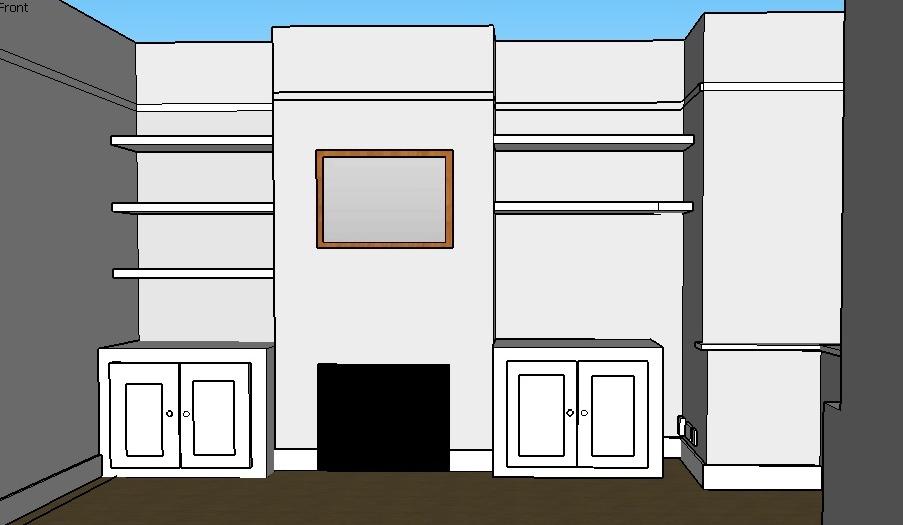 There is a chap on YouTube called Freebird interiors that has some great videos on alcoves - my choice would be create a carcas on plinth, and then scribe in fillers either side, maybe you could make a feature out of the extra space, making it an 'open box' and use for storage of some thing, (dunno what, I saw it done where someone put logs for their log burner!)
F

Thanks Rorton. I've watched a lot of the Freebird stuff too, it's excellent.

I've considered doing the open side but not sure it'll be workable in terms of looks (there are so many wires coming out of that wall from cable entry, phone entry, plug points etc. so it feels like it needs to be hidden away.)