Wondering if people could help check whether I’m being overly fussy, which I hope I’m not.

Currently having an extension built and they’ve just blocked up to DPC level. Looking at it after work it looked a little off to my eye so I got a tape out. One of the corners is out of square leading to a 70mm variance in width over a 2.4m run.
What’s deemed acceptable for squareness in masonry terms?

I’m not expecting cabinet grade squareness but this is visibly on the wonk.

Will be raising with the Brickies when I see them as I want it squared up, which will mean them taking it down and relaying. The annoying part is they’ve done the backfill before I noticed so will involve digging all that out again too so a fair bit of work.....

I'd struggle to allow anything over a 10mm error over 2.4m. 70? Get them to re-build, but to give you a damn good explanation first. If that explanation doesn't stack up, consider kicking them off the job.

If it doesn't look right, it isn't right.

While reading your post I laughed to myself, wondering if your brickies were Welsh... and they were!

It appears "tradesmen" (I use that term very loosely) are no different 50 miles down the M4 from you. I've been renovating our house part time for the past four years. I've done much of it myself, simply because we can't find anyone with a modicum of skill, care or even basic knowledge of their particular professions. Apart from two, the rest have been completely incompetent.

My background is engineering so i get told off every time i work with builders as i'm far to exacting - but as others have said - 70mm sounds far too much over that distance!

When I got out of high school I got a job as a helper to a framer. We also did the forms for the concrete and did the pour when the concrete trucks showed up. When we did the forms we held the the measurements on a 25’x40’ foundation to a quarter of an inch or less.

The work you’ve had done is substandard and that’s being kind.

What I find interesting when these sorts of issues crop up is to find out how and why such errors occur. 70mm isn't a "wrong side of the line" error, which you see now and then, where the initial setting out was done correctly but a brickie has then built a corner 100 or 103mm out of place. Sometimes with complex shapes you get cumulative errors because the setting out wasn't done from one reference point, but run on each time from the previous measurement. This guarantees that if there is a measuring error it is moved on all along the job, and any further errors compound it. But one of the most common errors (other than simple mis-reading of the tape) is the "setting out from each side" error, and without knowing anything about this job, this is what I would suspect here. This involves setting out the side walls of an extension by measuring in from the outside corners of an existing wall, rather than measuring from one point (one corner or the other).

Whoever drew the drawings they are working to bears the responsibility of ensuring that their setting out instructions are clear. Put on a marker saying "all setting out from here". Give dimensions only from that setting out point. Leave a big note requiring the builder to be in contact if there is any discrepancy between the dimensions given on a drawing and those found in reality on site (this occurs most often when demolition is involved, or on ancient buildings with curved walls). Or even, instruct the builder not to set out without the architect being present . I've done this a number of times on complex jobs.

The funniest setting out problem I've ever come across was on a 10 storey block of flats, curved and complex on plan because of a railway line and some service easements. The first two storeys were concrete, and were set out by a team of surveyors/ engineers with lasers, GPS readings, and so on. They reckoned that no dimension anywhere on the 60 metre long buildings would be more than 5mm out, which was important because all the framing which sat on top of the concrete had been in production for months, and was stockpiled awaiting delivery to site. So when I got a phone call in the office asking whether it was possible to change the shape of the front of the building, all the way up, by 400mm, I was somewhat surprised. The checking engineers had found a huge error in one corner. It turned out that a gang of people building the formwork had sat down for lunch, and one of them was inconvenienced by an adjacent bit of string.............so he hooked it over something to get it out of the way! Even on a £100 million project, the position of the walls is determined by a string line, and with humans involved errors will occur.
T

Thanks all, reassuring I’m not expecting too much. Once the house part is done the workshop is next so hopefully they’ll put it all right without too much grumbling and everything will be square from now on

I spoke to the civil engineers who built the huge sectional dome covering the radar gear on the site of RAF Portreath some 17 years ago, and they said that if any mounting bolts were more than 6mm out the whole dome wouldn't fit together.
T

Worked out how to resize pics on my phone 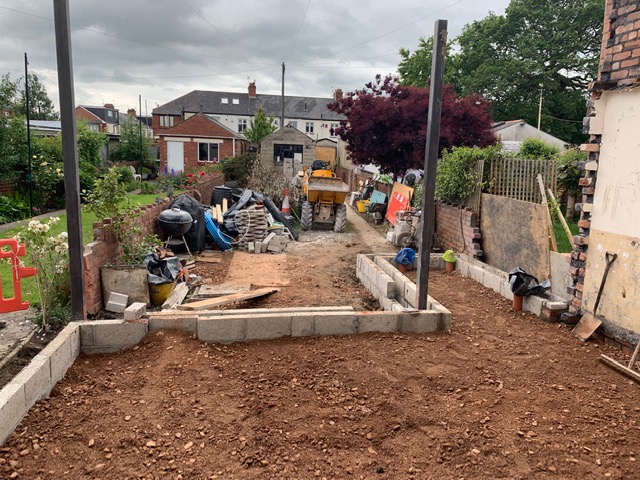 With the shower room on the side currently being out 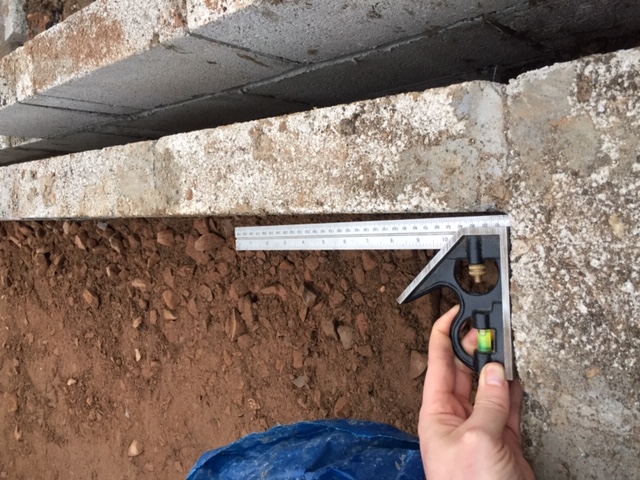 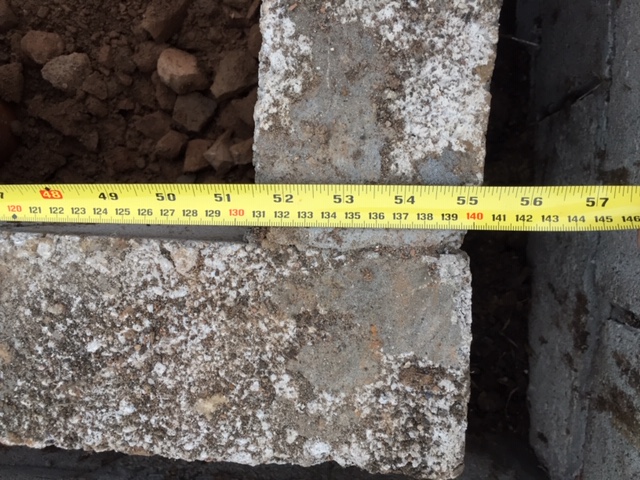 Where it meets the rest of extension 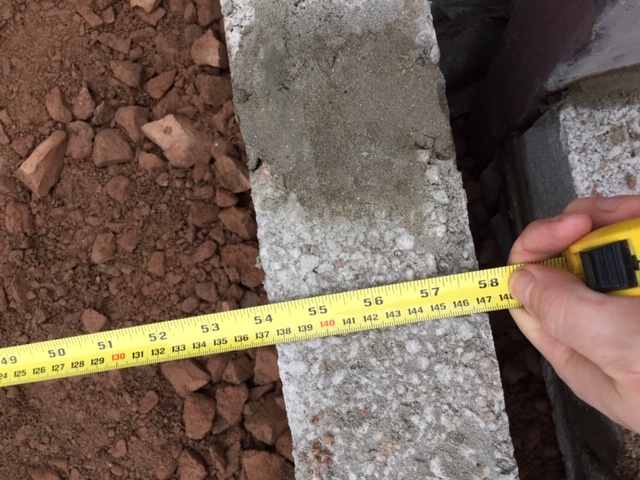 Yeah that's pretty poor what are the footings like? Much room for adjustment?

Oh dear, somebody has [email protected]#ked up

Setting out isnt as easy as people imagine, because houses arent always square or plumb.

As Mike says, somebody needs to make a decision on the setout datum point and work from that.

Many builders dont know how to set out, the good ones triangulate to get the set corner points.

Too often people rely on a square for setting out -but that only gives localised accuracy. All the same, one of those big folding set out squares wouldve picked up this error.

Unfortunately resolving the error may require the whole bricjwork being redone - dont get persuaded 'itll be ok' - the time they take to redo now will save them time during the build as out of squareness will affect flooring, roofing etc etc.

In the scheme of things an error picked up when brickwork is only up to damp is an irritation, not a sleepless night.

Not so funny when the founds are wrong!

I once setout an extension foundation for piling -which I marked out wrong. I dont know why, but I woke up at 4am thinking about the job and had a sudden heart stopping thought. Luckily I got to site at 7am and adjusted the positions and all was ok

Oops! Personally I'd contact the boss of the gang whether it be a person or a company and ask them what they intend to do about it, and insist they cover most of the cost to put it right.

It's not just that the wall is out but obviously everything else INSIDE - any and all fittings that come off that corner are now a major issue for the fitters.

What's going in that corner? If it's any of: bath, shower tray, sink / vanity unit then it's got to be corrected or it'll look awful and you'll be looking at it for years to come.

Even if it's the toilet it'll look wonky fitted on one wall or the other.

If they get shirty, tell them you'll kick them off and make a claim on thier insurance if they don't rectify it, you checked they have some right?

It'll delay the work, but how sure are you you'll get a better job as they build the rest if they can't get the foundations right?
W

Mark A":34b5x906 said:
While reading your post I laughed to myself, wondering if your brickies were Welsh...
Click to expand...

All sorted (dug out, courses taken down and relaid)
Talking to them first thing meant the concrete could get cancelled. Set back a day but means it’s sorted and hopefully everything is double checked from now on....
Will be up to roof level next week
R

--Tom--":141gfnsn said:
All sorted (dug out, courses taken down and relaid)
Talking to them first thing meant the concrete could get cancelled. Set back a day but means it’s sorted and hopefully everything is double checked from now on....
Will be up to roof level next week
Click to expand...

In reality, the builder will be grateful it got spotted before too much work had been done.