I't been years since I posted my last project, but here I am again.

My latest project isn't classical woodworking or traditional joinery. I have built so much with traditional tools and methods, that I wanted to do something totally different. I don't even remember where the original idea came, but suddenly I found myself surfing on bike building pages and then it was just matter of time before I decided to build one.

The building method is quite similar as with the first carbon fiber bikes (carbon tubes joined together by wrapping carbon thread and epoxy over the joints) or with bamboo bikes (where the joints are usually done with hemp and epoxy). I just used thin-walled wood tubes instead of carbon and bamboo. The tubes were made by laminating 0,6 mm veneer over a foam core with epoxy.

I did not want to start on full scale before trying my idea out first. I have a 2-year old son and I made a kickbike for him as a prototype, just to try out my idea of the plywood tubes. 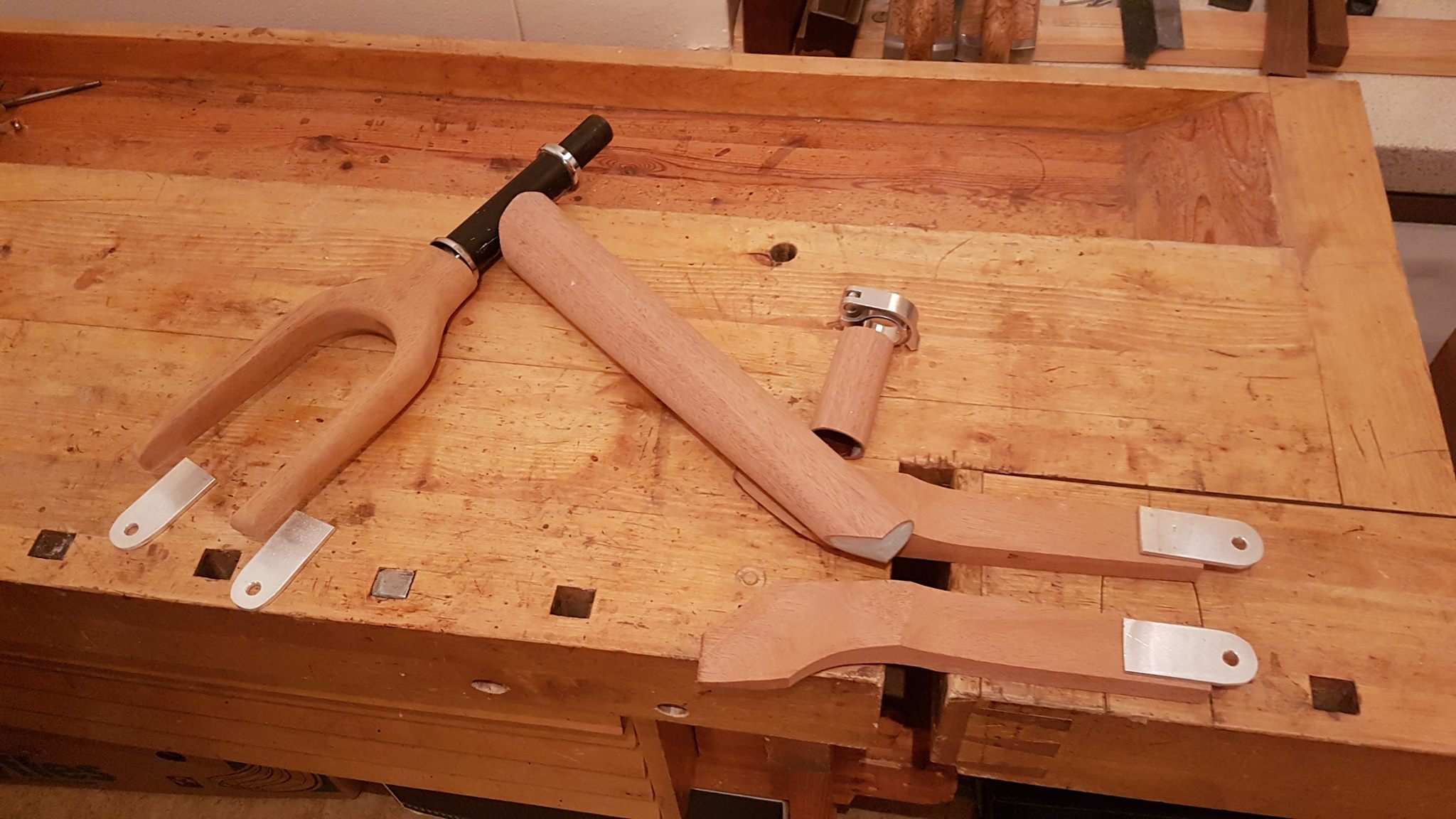 Then I just kept on watering and fertilizing the bike untill it grew big enough for me...

My own bike needed a bit more time. I was able to proof that the ply tube was strong enough for a full-size bike, but I needed to figure out quite a few other things as well, including tiny details as learning about bike geometry design... I went out for a bike fit, got a few bike suggestions for bikes which could be a good fit for me and ended up drawing the whole geometry by myself along the lines of the example bikes.

I laminated the tubes like on the small bike and the rear fork was laminated from 3-5 mm mahogany strips. I also built a jig which allowed me to position the components accurately for gluing and making the carbon joints between the wooden parts.

There are very little pics about the carbon wrapping and lamination process as it is so messy work, but I finally got the bike ready last Saturday. I have been riding about 150 km with it since, and it works perfectly. 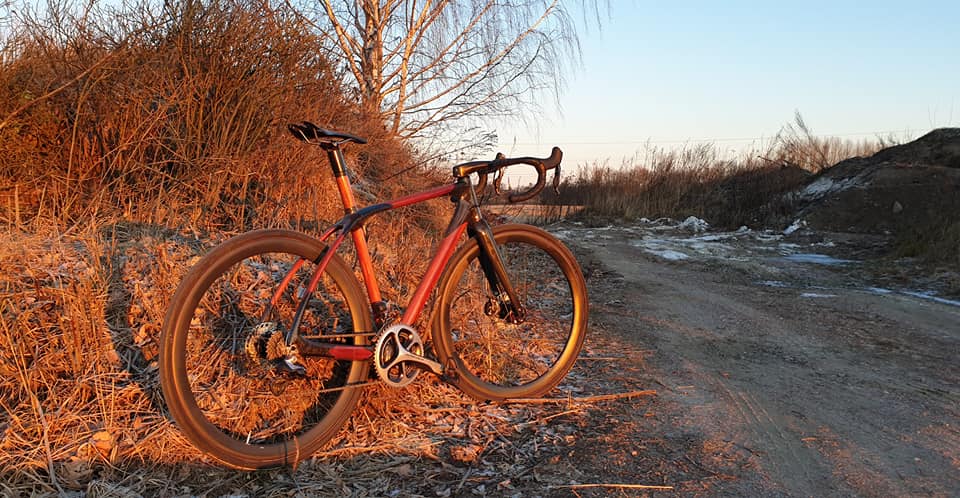 Sorry about the very thin documentation on this one I have been documenting my earlier projects so much over the years that it was a relief just building the bike instead of using half my energy in taking pictures and writing up stories.

Pretty cool. I bet that gets a few heads turning for a double take when you riders pass by or at the parking lot getting ready/packing up. =D>

Does the frame flex? If so, is that a good thing? It's intriguing. A completely mad idea, but excellent.
B

Hats off to you, that’s awesome!

superb, it's a good example of what's possible.
F

Outstanding..like that a lot.
How does it ride? Seems that the wood tubes would be very good at vibration dampening. Is it?
S

So cool. Love to do that. How long did it take?
J

Nice. I've seen bamboo bicycles before (well, I say "seen", pictures on the web), in fact I thought about enrolling in a course/workshop to build one, but decided against it, as I had nowhere dry to keep it.
Seen wooden balance bikes as well.
H

That is absolutely fantastic. My other interest is bike racing and that would not look out of place anywhere
Ian
P

Thanks for the kind words, everyone. I think the bike turned out even better than I planned. It really turns heads, and I've pretty much broken every speed record that I've previously tracked on my Sports Tracker.

The frame is really quite stiff, but still comfortable to ride. If I'd have to complain about something, the lateral stiffness of the front end isn't perfect: if you grab the handlebar while riding and give it a good shaking from side to side the front end flexes a little. This only happens at greater speeds (50-60+ km/h) and the vibrations are quickly dampened. I haven't tried doing this to a lightweight carbon frame so I can't really compare whether it would be present for such a frame or not. In any case it's much stiffer and better ride than my earlier Surly chrome-moly cyclocross frame I had.

I started the project a year ago with the kickbike. I have been working on it every now and then so can't really say how much time it did take. If I'd have to build a new frame today I guess it would be somewhere around 3-4 working weeks to get it ready.

That's very cool.
How much of the frame strength do you think comes from the wood vs epoxy and carbon fibre?
P

samhay":1hcbq3oo said:
That's very cool.
How much of the frame strength do you think comes from the wood vs epoxy and carbon fibre?
Click to expand...

Can't tell. If you take a similar bamboo/hemp/epoxy bike, can you tell how much strength is in the corners and how much in the bamboo?

Frankly it doesn't much matter. It's a composite bike, but if I really have to decide I consider it a wooden bike with carbon reinforcements, not the other way round.

That looks great, slicker than any bamboo bike I’ve ever seen.
Did you buy a b.b/ head tube from somewhere or are those tubes wooden too?
What about the drop outs? How are they attached to the main frame?
Great work anyway!
P

Both tubes were carbon and ordered from Rockwell composites. Much easier than laminating them over a mandrel myself. Aluminium components were on the list for a while, but as carbon can be really aggressive to aluminium parts I decided to go with carbon. Lighter too. The headtube has a 1 1/8 bearing on top and a Cane Creek 1 1/4 adapter bearing on the bottom, which I laminated over to hide it from sight. This allowed me to use a tapered fork instead of an "old-fashioned" straight one.

Dropouts are from Paragon Machine Works, quite heavily modded. They intend them to be for metal bikes, but instead of using their PolyDrop parts that are supposed to be welded to the frame, I just used the dropouts as molds to laminate a epoxy/carbon hanger to the frame instead.

Thanks for the reply. Inspiring stuff.
You must log in or register to reply here.