a stroll through design

Here's a break from woody stuff. The design of things interests me a lot... always has done. From typography to common household objects. But right now - cars.
I honestly don't want to offend anyone, but how do Toyota consistently make cars so ugly? When they occasionally do a good one (a recent MR2 I thought) I have to assume they did that by mistake. I mean it can't be that hard... just look at a nice one in the street outside, and sort of copy it.
Honda get closer but no cigar either. The NSX was an excellent car, but it just looked like a Sumo had sat on it by mistake, before it had set.
Now then, BMW. The previous shape 3 Series was the definitive, then they ruined it. BMW seem now to be working in a design language that I cannot understand. It must be quite easy being Audi these days.
So, on the subject of Audi - I suddenly remembered the other day how truly BRILLIANT the A2 was. One of the best car designs since the 2nd war I think... really. That good. Love the way it draws from 40's Auto-Union - in the shapes, the Auto-Union motif on the front 'grille' and that wonderful curve down the roof-line. An absolute classic: 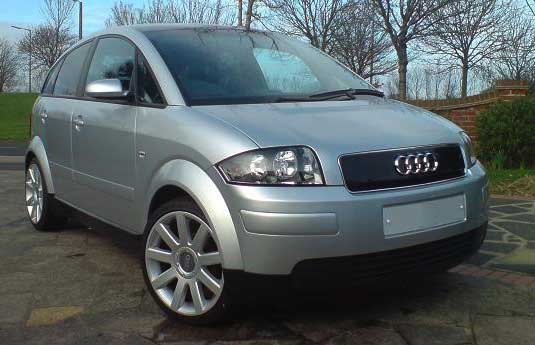 The A2 is so good that they don't lose value anymore. Technically probably too good ( I mean too expensive to make) - aluminium body, engine so low it is accessed from underneath (like the Boxster). Anyway I may be on the hunt: diesel, v low miles, full history, not silver or black (love the mid blue or the dark grey). I reckon I would run that for ... it could see me out :shock:

Remember the NSU RO80?? - my first boss had one back in the seventies (I was six then) - that car still looked very good twenty years later. My first boss was tech director of Kef Loudspeakers, Laurie Fincham. A really great man. I digress.

Next - Dornier? German aeroplanes with bad intent. But Citroen have done some odd things. The Deux Chevaux, the DS, the SM, the Traction Avant. So here's an idea, let's take the Traction Avant engine / gearbox, inspire the design with a Dornier... and make a van: 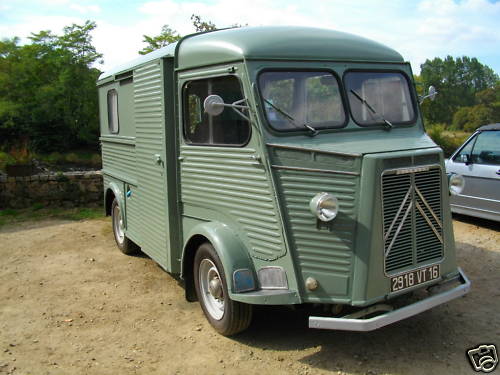 Another stunner - there's a bloke does fine coffees out of one of these down Brick Lane every Sunday - that van is a celebrity and the inside really is a 50's espresso bar.

Anyway, I could go on... but anyone care to propose really great post-war design. Anything at all... like the original Penguin paperbacks with dull orange and plain type. Or a Sinn watch maybe. Anything but it has to be good :lol:

Gosh, NSU RO80 thats an obscure one. I used to work at a Ford dealership where a workmate was well known for swapping out knackered Wankel engines for a Ford V4 on the NSU RO80. Needed a special bellhousing adaptor I think.
C

yep WP - that was a very common swap. The engine was iffy indeed (the seals around the rotary engine I recall, the equivalent of the piston rings like). But what a shape that car was!!

I'd agree with you in your summation regarding Audi motors...most of the entire range at the present time is stunning, particulary the bigger ones. However, I'm scratching me bonce to think of anything design wise that's post-war and that ticks all the boxes. For me, a design has not only got to be stunning today, but it's got to be stunning yesterday and tomorrow...in other words it's got to be a design 'classic' that stands the test of time. I can think of one or two examples (Hans Wenger's chair for example and a rag-top E-type Jag plus some of the early Ferrari's) Will the Audi's be 'stunning' in 25 years though or will they look dated?
Ahh...one other thing, the Trench Coat (though that's not post WW2) but it's as popular now as it has been since WW1 when it was first designed.
Interesting topic to natter about though

Edit: include the 'Spitfire' (just for RogS :lol: ) the 'Mosquito'...that's a personal thing though- Rob

I don't agree about the Audi (I typed Aldi first :shock: ) range, but then I do drive an ALFA.

Isn't appreciation of design a little like classical music? One's likes/dislikes change as one gets older (unless it's the Spitfire!). I remember lusting after the Lotus Esprit but now think the design too angular. I'd go for a classic 'C' type Jaguar if I had to choose a car.

Digressing slightly, I find that many of the larger 4x4's from the likes of Audi, BMW, Porsche are way, way, way too much 'in yer face' and are bought to compensate for the small-penile dimensions of the owner.
W

Shame Toyota hasn't made this concept a reality:

RogerS":1b02o26g said:
Isn't appreciation of design a little like classical music? One's likes/dislikes change as one gets older (unless it's the Spitfire!). I remember lusting after the Lotus Esprit but now think the design too angular. I'd go for a classic 'C' type Jaguar if I had to choose a car.

Digressing slightly, I find that many of the larger 4x4's from the likes of Audi, BMW, Porsche are way, way, way too much 'in yer face' and are bought to compensate for the small-penile dimensions of the owner.
Click to expand...

Agreed on all counts Rog, which is why I said that some designs (only some mind) stand the 'test of time' that most folks like...the 'drool' factor if you like. Both the E-type roadster and Spitfire had it when they were first designed and over the intervening years, it's only got greater. Is there anyone who would disagree that the Spitfire was just about the prettiest single seat aircraft ever designed? - Rob

Pelikan Souveran range fountain pens. The basic design of the filler mechanism is pre-war but it has never been bettered and goes on and on. The ultimate fountain pen and a design classic.

I've been pondering this one for a while Paul :-k

Form or function?
Function or form?
Form and functon?

For sure, the Leica is a pretty penny :shock: and represents probably the best 'funtional' camera around, but it looks no different to any SLR that I could buy at Dixons (as was)...would you recognise a punter with one at a distance? For me, a truly classic design has to embrace form and function...one without t'other don't cut the wotnot :lol: - Rob
D

As with all things visual - one man's munter is another man's fittie (and vice versa)!
W

ME262 was of course the best looking fighter of WW2.
R

woodpig":2vihojk2 said:
ME262 was of course the best looking fighter of WW2.
Click to expand...

As far as jets go, I suppose it was. Hmmmph!
B

If you split that pic in two halves with a piece of paper, or your hand, and cover the right hand half (the front of the car from the front of the wheel arch) it magicaly turns into a Fiesta :?
K

YA made some butt-ugly machines. But they weren't afraid to try something unusual, and sometimes hit it out of the park.

woodpig":39gbjgnk said:
Shame Toyota hasn't made this concept a reality:

That is very similar to the Toyota FJ in America.

Though I think the most beautiful are Delahaye WOW.

woodbloke":1wzteu0q said:
it looks no different to any SLR that I could buy at Dixons
Click to expand...

The M-series Leicas are rangefinder cameras, not SLRs.

I know they are all cars but here we go,

Not in any order and just a few that I can think of.

RogerS":3snpp601 said:
are bought to compensate for the small-penile dimensions of the owner.
Click to expand...

OMG you'll have the thought police decending and modding the post for it being a racist (little dicks) remark :lol:
Unfortunately the peeps who used to drive BMWs and Mercs have now moved over to Audi (in my experience...)
Right back to design.
For me (being 55) its the sound of a car or plane that sends me. A Hurricane or Spitfire or Mosquito send a shiver down my spine when they pass and when on the tarmac, just like a Lambo Miura they look so perfectly balanced and simply 'right'. I believe someone once said that good design also looks good.
You must log in or register to reply here.
Share:
Facebook Twitter Reddit Pinterest Tumblr WhatsApp Email Link