A question you are probably fed up with

I desperately need a decent bench drill and have looked at these.
If you have any suggestions on any other make for the same price range please tell me.
I don't particularly want to wait and try and find a second hand one which may be better for the same money. They are impossible to find that either aren't the other side of the country or already sold.
Thanks

This is a slightly larger bench pillar drill for hobby use. Robustly made from cast iron and machined steel for stability and strength. It has a true running chuck spindle and a good fit of the quill assembly into the headstock casting to ensure...

Or at a pinch

Relaunching with a much improved specification, the 2B5 now features a powerful 550w motor, increased speed range and improved capacity all round.

This may not be the answer you're looking for, but in this price range there is no clear winner. Some people like the Bosch PBD40 but it's hardly a precision machine and I'm not sure how it will fare in the long run.

I ended up buying a Wabeco BF1243 stand with a 'top of the range' Bosch drill (GSB 21-2 RCT) instead, but this not a perfect solution either: It is very versatile and it has less play than the PDB40 I saw in showrooms, but precision remains poor and it is a bit 'agricultural' in use. -at least it is possible to add shims in some places to make it drill straight(er) but this is still far from a decent industrial bench drill.

From what I see, a new quality drill press requires a budget approaching £1000

The answer to all these kind of questions is the same... What do you want to do with it?

Tell us what you want the machine to do, then you can get somewhere near a decent answer.
S

Simple answer is to look for something old and solid, the newer machines are not a patch on say the old Atlas machines.

Fobco Star, Meddings etc. Second hand and refurbish it yourself or buy already done. Most people who buy cheap pillar drills moan about them before long. The old industrial ones were built like battleships. In fact that were probably used to build battleships.

They are VERY heavy as the columns are usually solid and all of the metalwork is thick and robust. You can get close to this with modern drills but not at your budget.

For drilling holes in softwood, probably the cheap ones are perfectly good enough.

[I ended up buying a Fobco Star and refurbishing it. I replaced the chuck and morse taper fitting. There is zero slop or run out that I can measure].
B

Thanks for your replies.
The machine is only going to be used for drilling holes in softwood, I know my price range is low, but I am only asking for advice on the best cheapo.
I'm now looking at the Bosch PBD 40!

Small holes in soft wood... any of those will do. But a pillar drill is one of those machines that once you own one, you keep finding more things you want to do with it.
G

I have a floor mounted Axminster which looks very much like the bench top one you linked to. It’s fine! I’ve drilled hundreds of holes in metal and wood (including quite tall lamp stands) and it just works. If I was a proper engineer I’d be able to discern that it’s terrible, but luckily I’m not and it keeps on drilling straight enough holes in close enough to the right place.

PAC1 said:
There was a thread recently extolling the virtues of the Bosch PBD 40
Click to expand...


After waiting and price watching for some 4mths, I managed to grab one of these for £211 via Amazon at the beginning of the summer.

It’s my first bench/pillar drill so I don’t have anything else to compare it to but overall I’m pleased with it. The lowest price I’ve ever seen it listed was £199 again from Amazon (Black Friday 2019 if I recall) and I’d say near that price point it’s clearly a smashing bit of kit, when compared against entry/no frills retail options.

However, the average sales price point seems to be around £270 (and certainly at it’s original RRP of £349) it would be a much more difficult call between that and a more traditional/mechanical-belt driven drill.

Don’t get me wrong it does have its quirks and I can fully appreciate that it won’t be every ones cup of tea, but as a keen hobby user and drill press virgin, it’s a nice addition to my setup.

2b5 warco drill on eebay with a 20% off voucher just now. Only one left in stock. I just bought the bigger one, 2b12 and it seems good enough for drilling holes and has 16 speeds and 650w motor. Can feel no play in the quill I will post some pics in a bit.......
2 holes were out of shape but turned out to be paint and a bit of filler. It is still sitting on the workbench while I figure out where to put it. It is huge in comparison to the one I have been using.

Just to be aware that all these small pillar drills are for light work only. I know, as I burned out the motor of my Ryobi drilling 20 x 30 mm holes in plywood ! The Ryobi has however got variable speed which is a really useful feature if you can still find it.

I've gone through five or six drill stands for my mobile lock installation kit trying to find one that won't break after a few uses and is stable enough to give repeatable results. The best stand I used is the Wabeco B1230.

Before I found the Wabeco, I was lugging around an inexpensive, but heavy, Einhell table top drill. Since I needed a heavy duty hand drill for most of the drilling operations, using a drill stand allowed me to get rid of the Einhell. 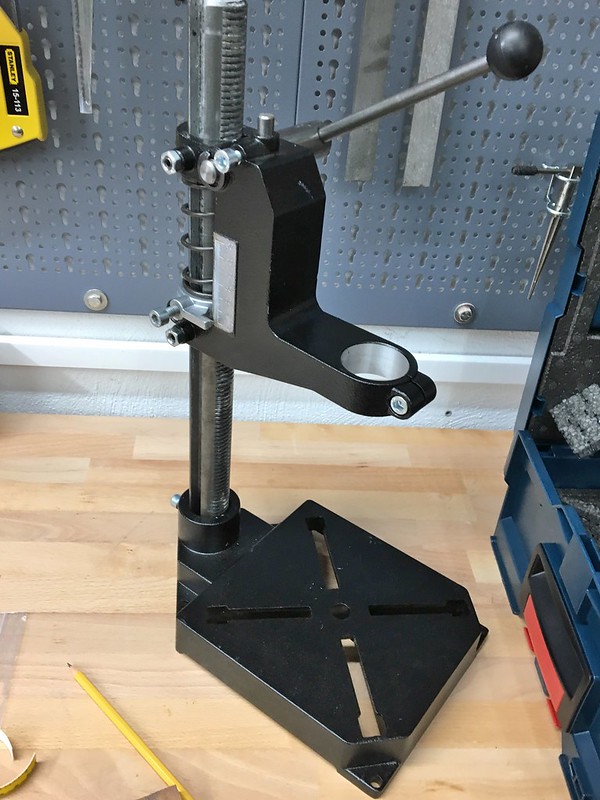 I had a WOLF drill stand for something like 20 years. It served me well and I burnt out one drill in it and was halfway through the second when I realised I needed a longer throw between drill and base.
I have a small axminster 13 mm drill press. In all honesty it was unusable when it arrived new and I had to do major modifications to it. But because of the shipping cost it was not practicable to return it. Its now acceptable and I use it far more than I thought I was going to. I find the 5 speeds very handy.
J

sunnybob said:
.. But a pillar drill is one of those machines that once you own one, you keep finding more things you want to do with it.
Click to expand...

Don't know about that - I bought one about 4 years ago and it hardly gets used.

My address is on its way to you. ship it on whenever youre ready
R

Fellas, an electric drill will never have the accuracy of a dedicated drill press. While I lashed out £££ to get my Ryobi motor rewround I still revert to my old Multico morticer for drilling. The old stuff beats the Chinese tat anyday.
You must log in or register to reply here.

D
Questions from a beginner..