So just lately I have been making a pretty big green oak Pergola, on and off really whilst other jobs come and go etc. I don’t usually get involved with the garden structures but we’re a man down so I have stepped up.
We have a 6.7m uninterrupted span on the font, and a 12m centrally supported span on the back, with a kick back on the front extending on around 5m to bring the front and back more or less in line.
Some big timber (for us) being used here, up to 7m 9x3 having to be planed up. The thinknesser got a work out that’s for sure. 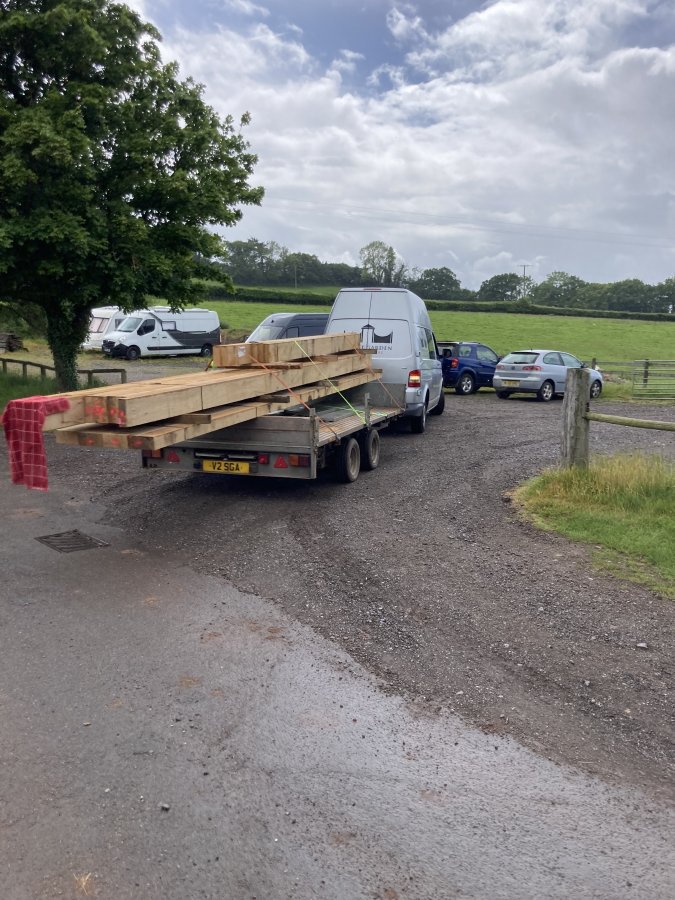 Sometimes, you have to do what you have to do, a 6 mile trip in some serious country lanes to get it to our yard was our best option, just slightly long on the trailer! But we got it done. 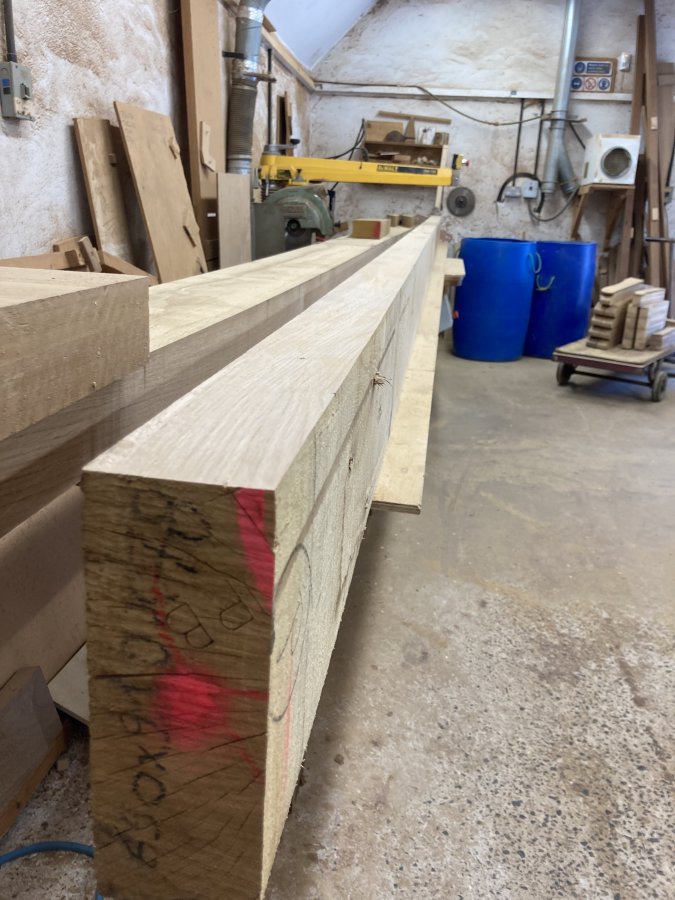 Just ran an edge on these support beams straight through the thicknesser, it is far too heavy to suraface and square and being green oak there is a little wiggle room on things being a little this and a little that..
Machining was hard work to be honest, due to the sheer length of the oak and the weight, navigating it in the machine shop was arduous and time consuming but it was our only option.
Managed to get it machined all up in about 4 days.
The basic design of this thing is 8 150x150 posts, carrying 3 sets of main beams in tandem either side of the posts, sat on an inch notch then bolted through. Slightly awkward here though as the long span at the back is running an angle, I’ll explain more about that nearer the time.
For now I’ll just put up a bunch of photos of it in its current state and update as and when I do a bit more. I’m currently metalworking and will be tied up with that for a short while. 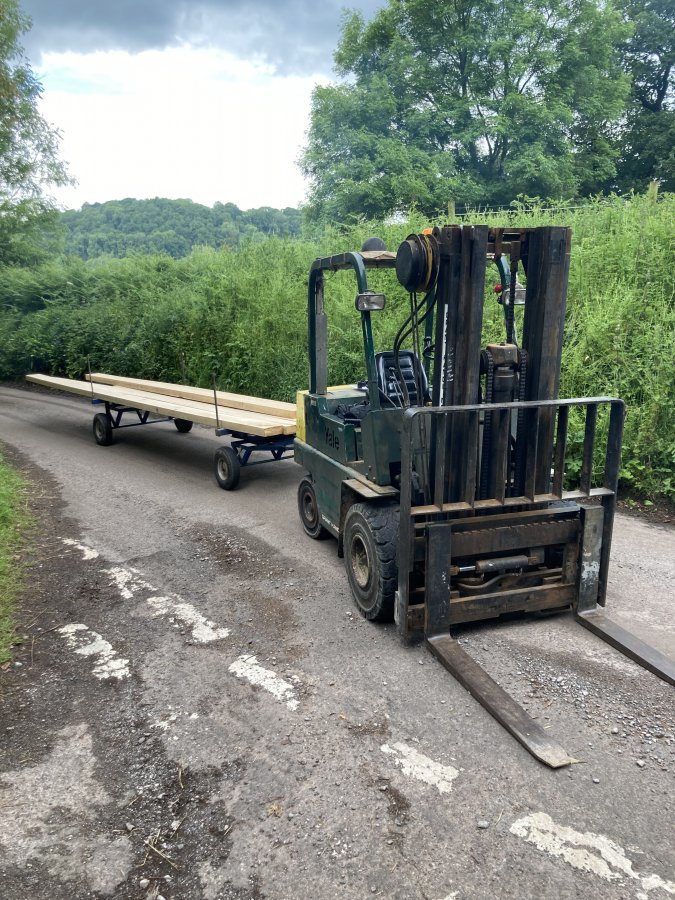 It’s a lot less effort for me if I just sling the timber on the forks and take it from the bottom of the farm where the machine shop is and drive to the top where it’s being worked on and assembled one to one on dummy posts. 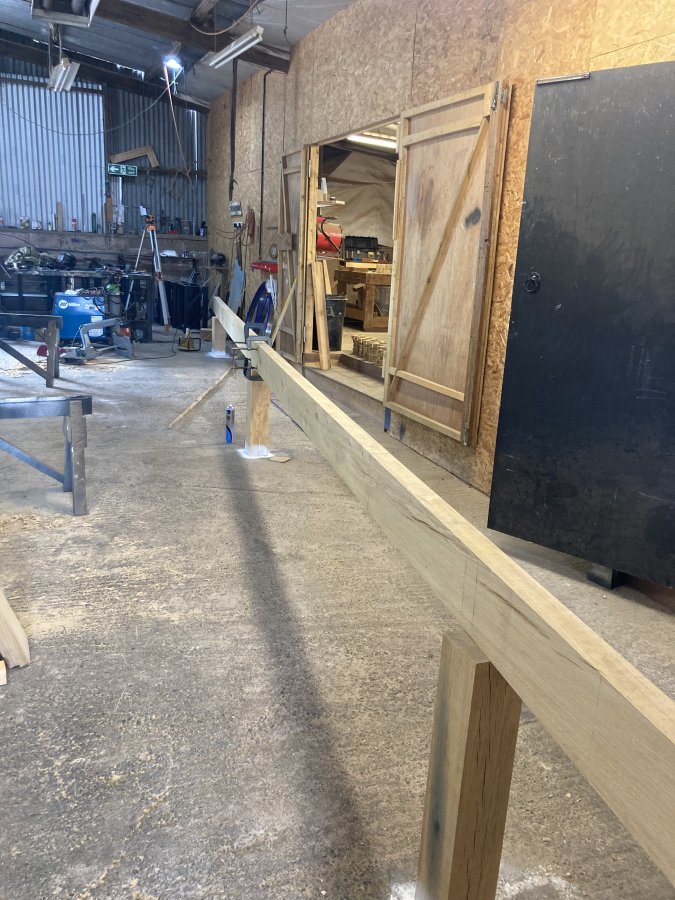 Here’s one of the back supporting beams, I’ve roughly halved the two over the middle post. Some of the timber is really straight, others are quite frankly shocking. I am not worried about the deflection though as the string line will cure all problems when the cross beams are halved over. 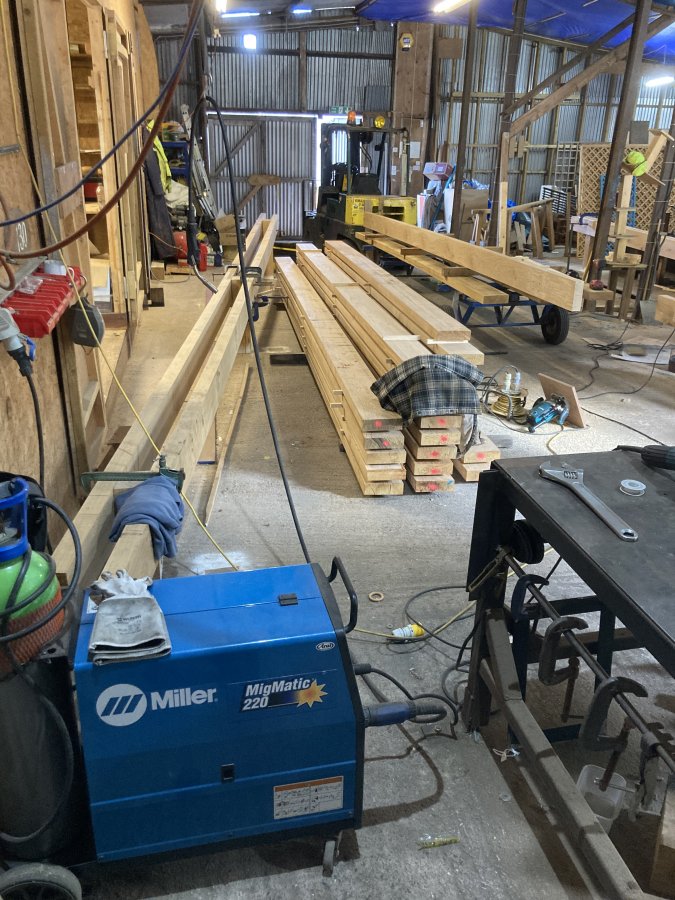 Here’s a shot of pretty much how it stands as of this moment, the supporting beams are in tandem, sitting on inch notches on the dummy posts. A lot of work just to get to this point, and it looks as if not a lot has been done. 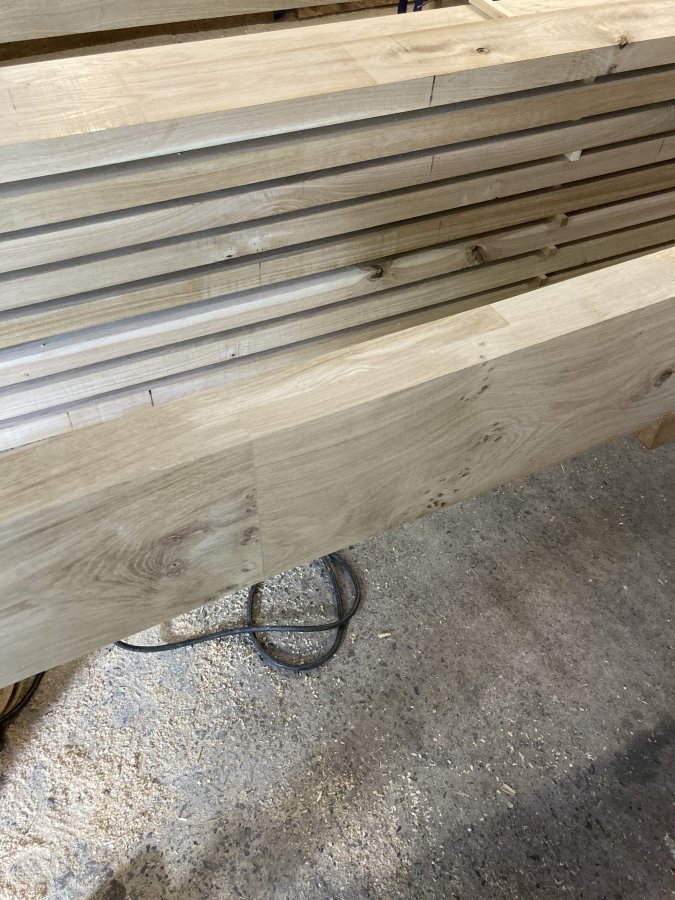 Unfortunately many of the cross beams need to be 7 metres long to Span from the front main supporting beams to the rear support beams, so i am having to lap them as I go as can be seen here. Time consuming etc but what isn’t in this line of work. 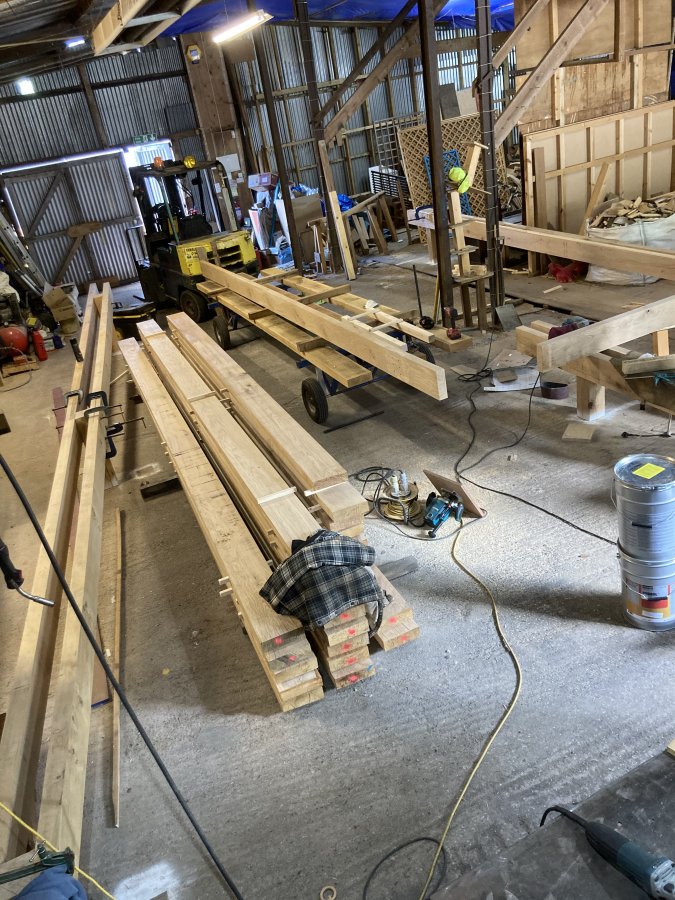 This is probably the best shot to actually see what’s going on. The left side has the long back supporting beams running on the angle toward the fork lift, rite over on the right hand side by the dumpy bag scrap is the 7 metre front supporting beams, and just in shot in the bottom right hand side of the photo, behind the stacked paint tins is the kick back supporting beams that run on out of shot.
There is a 500 over hang front and back on this beast, with each cross member being long enough to span on to the carriers, with just the overhang being the extended sections so no detriment to the structural integrity of it.
More as and when I get round to it.

I got a little further on the pergola last week, I have made a start with the crossbeams so it actually looks like i am doing something now.
I made a template for the ends of them and kicked off at the narrowest point. Each beam lands on 425 centres, and to follow the angle on the back each beam is 70mm longer than the last one cut. I think the longest beam hits Somewhere in the region of 7.1m!
They are just placed on top for now, I’ll make my way to the end and then I shall go about making the jigs to house them into one another. 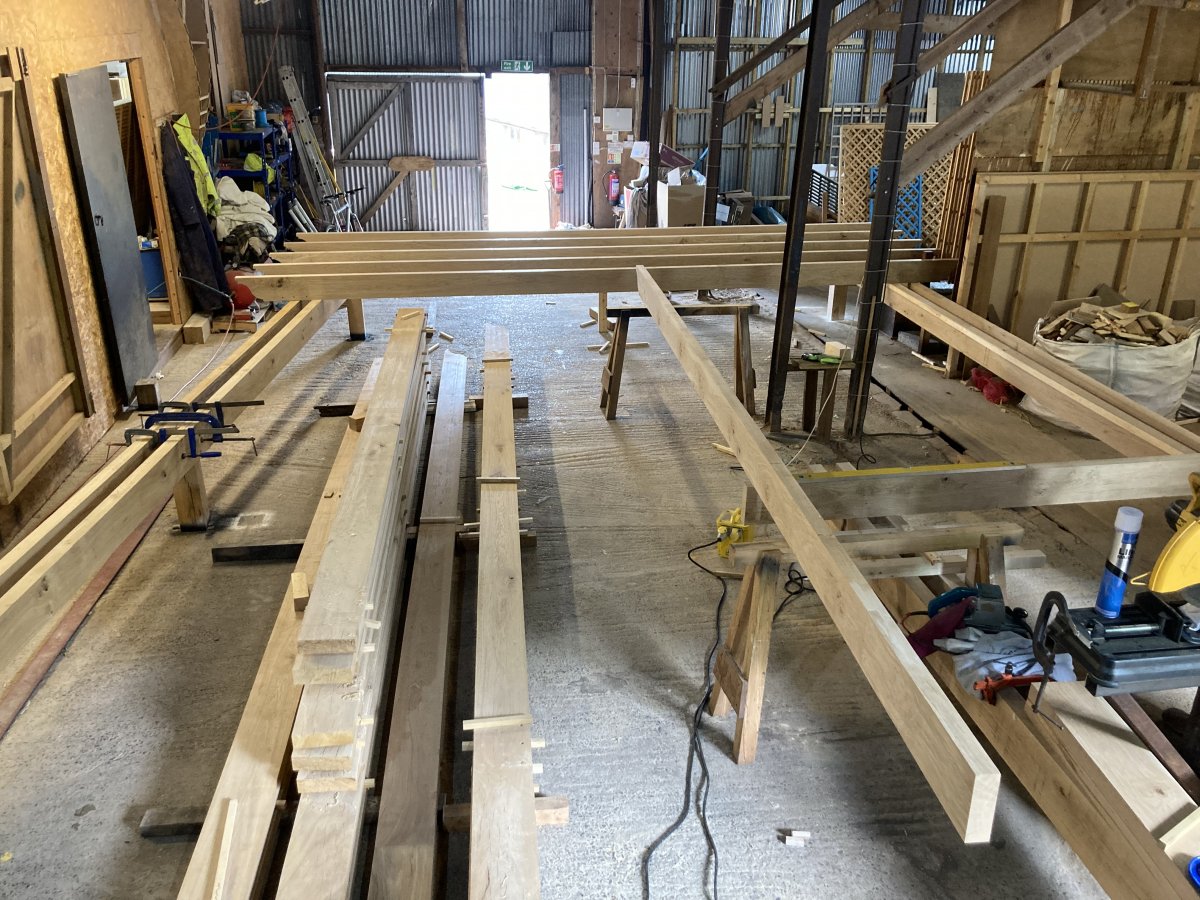 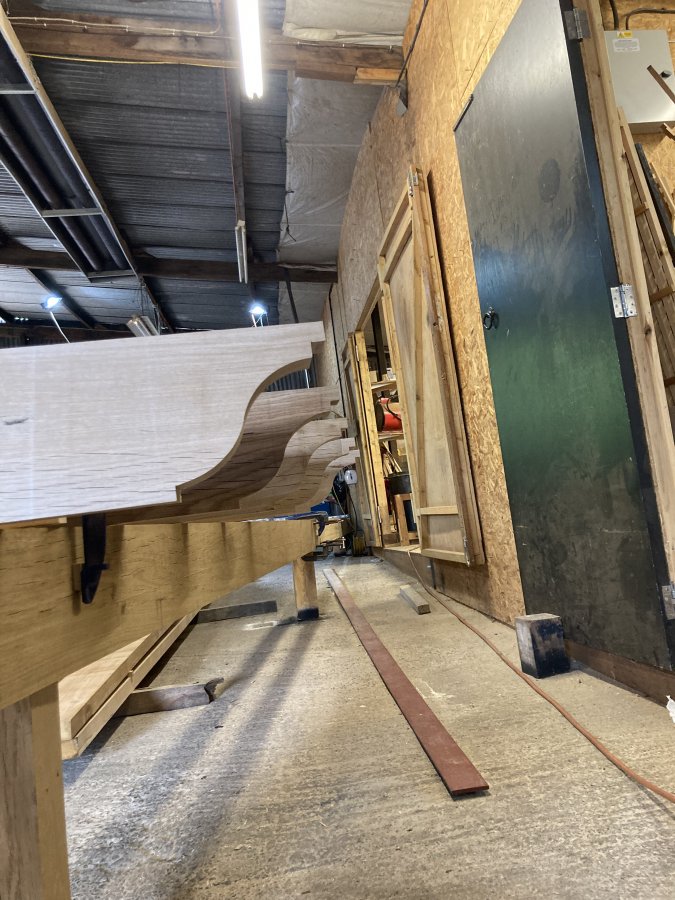 The piece of steel you see in the photo above

will be let in to one of the front carrying beams, sunk into the face deep enough to get a nice fillet piece over the top. I’ll probably drill two holes vertically every 300 or so. Just to give it a little more guts and prevent some sagging. Going heavy on the red oxide to prevent contact with the oak. We shall see……..


A pretty terrible video of me lapping a beam but you can get the gist of it, once it’s rough cut a simple jig goes onto the beam allowing a router to tickle the remaining waste to the correct depth. Almost every beam you see has a half lap in it so it’s a lot of work.

And here’s another short video of me (flat cap) and the apprentice putting a beam through over and under.
As you can probably tell we are not really geared up for this kind of work but it’s always nice doing some things a bit different every now and then. I wouldn’t want to this every week though!

Any reason you did not use a traditional scarf joint to extend the timbers? something like this below, it's the only video I could find, but gives the idea.

MikeJhn said:
Any reason you did not use a traditional scarf joint to extend the timbers? something like this below, it's the only video I could find, but gives the idea.

5 of the 22 beams will have a scarf joint, the reason the lapped joints are in use is the beams are long enough to span from one side to the other, so im only extending the backs that land rite on the carrying beams.
They are housed out rite on the joints so the lap is perfect here as it’ll keep its integrity when half of its cut away, the scarf is less than ideal here.
Unfortunately 5 are not long enough to make the span either side (I think it’s 5) so they will be scarfed to make the span.
J

I shudder to think of the cost for the timber involved! How big is this beast when finished?
S

Jester129 said:
I shudder to think of the cost for the timber involved! How big is this beast when finished?
Click to expand...

It finishes up around 13 metres long with the overhangs and 7-8 metres at its widest. I think so far the timber has cost around 7000 pounds, I’ve got some arches to machine which I still need some lumber for and a few pieces to extend the longest lengths with. It should look good when it’s up and done though. I’ll be sure to post it all up when it’s done
J

Thanks for the info. That is HUGE! Where is it going?
J

Well the pergola is up now, minus the gallows braces to fit and slab around the posts. The install went well given the size of the thing and the heat it went up in.
Here’s a few final photos of it from collection to install. 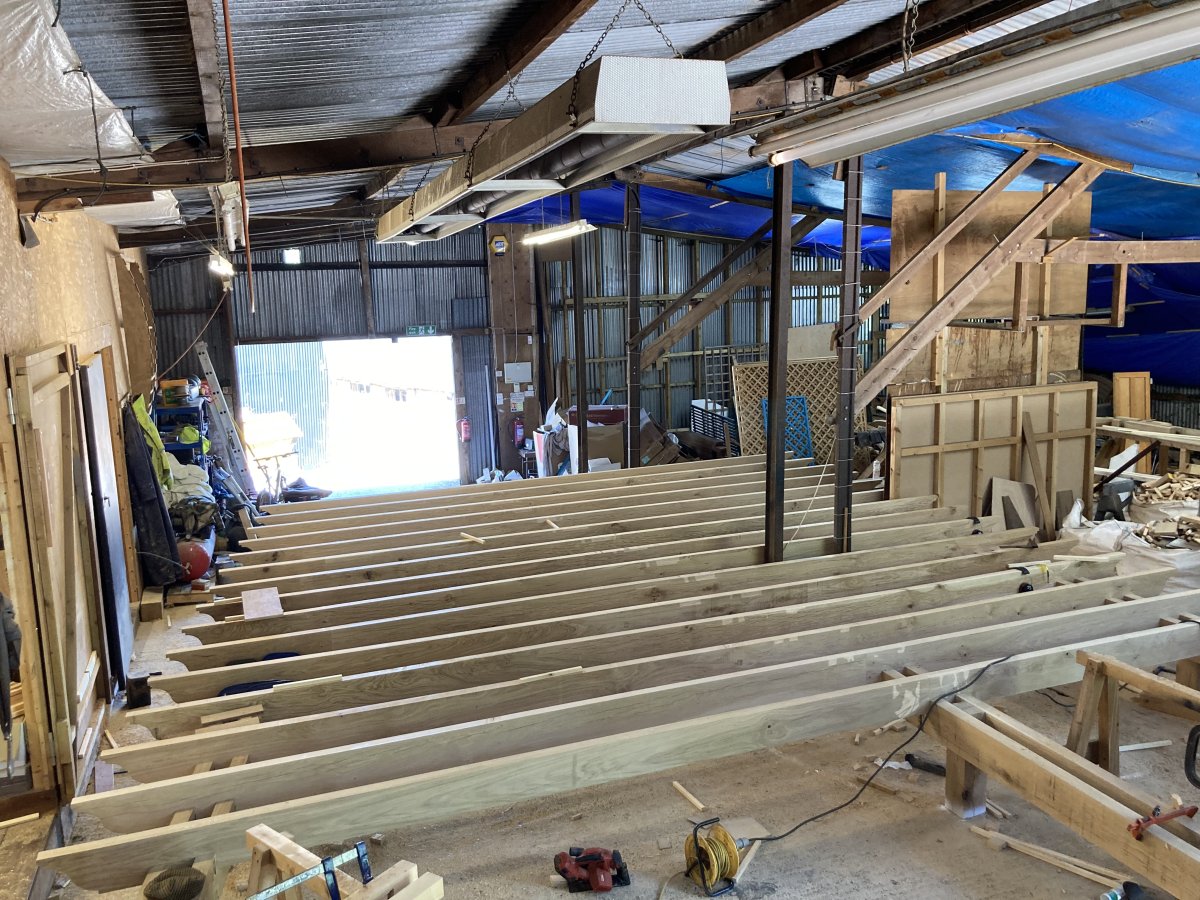 Getting along to the end of it here, two triple sinkers on the end here that travel across all 3 beams. 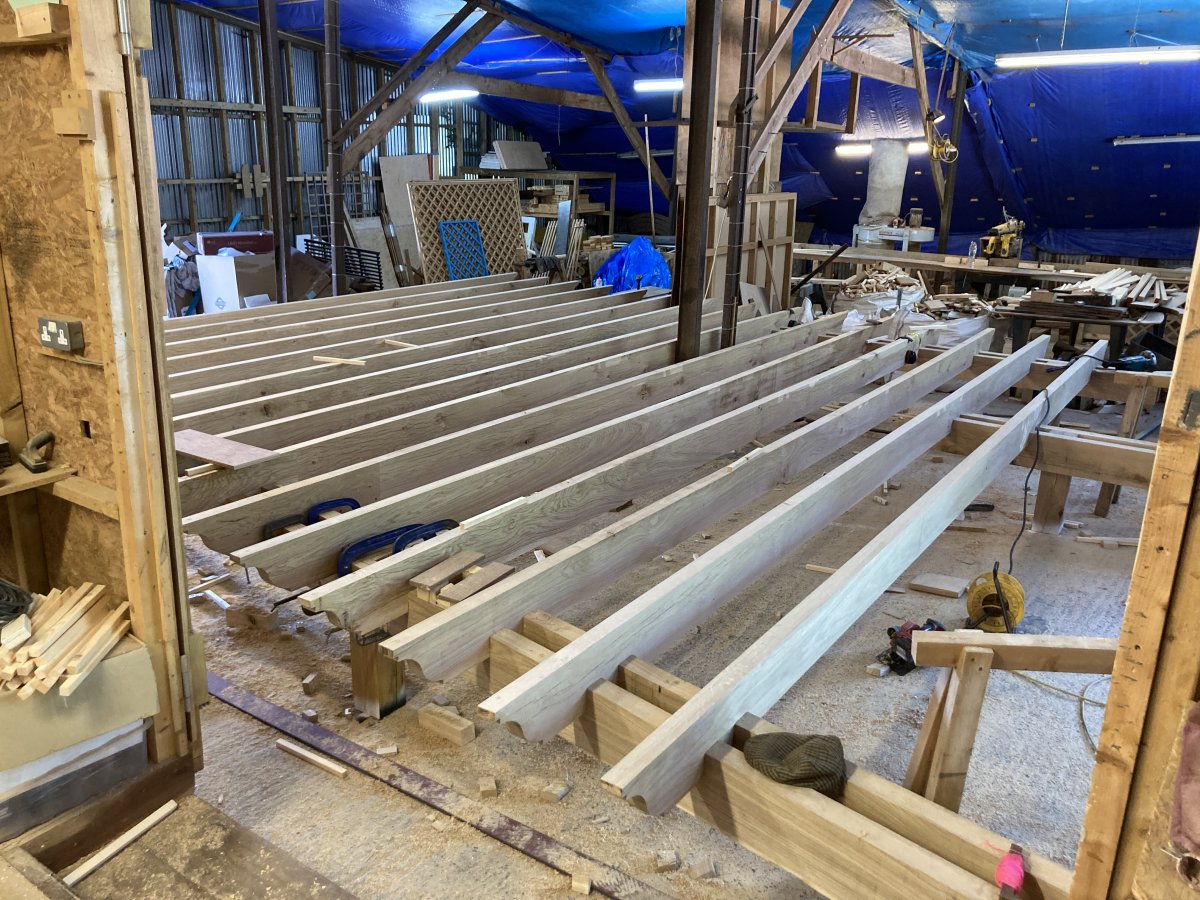 About 7.3 metres on the longest span there, set up on string to really get it as straight as possible. They were pretty given the length. 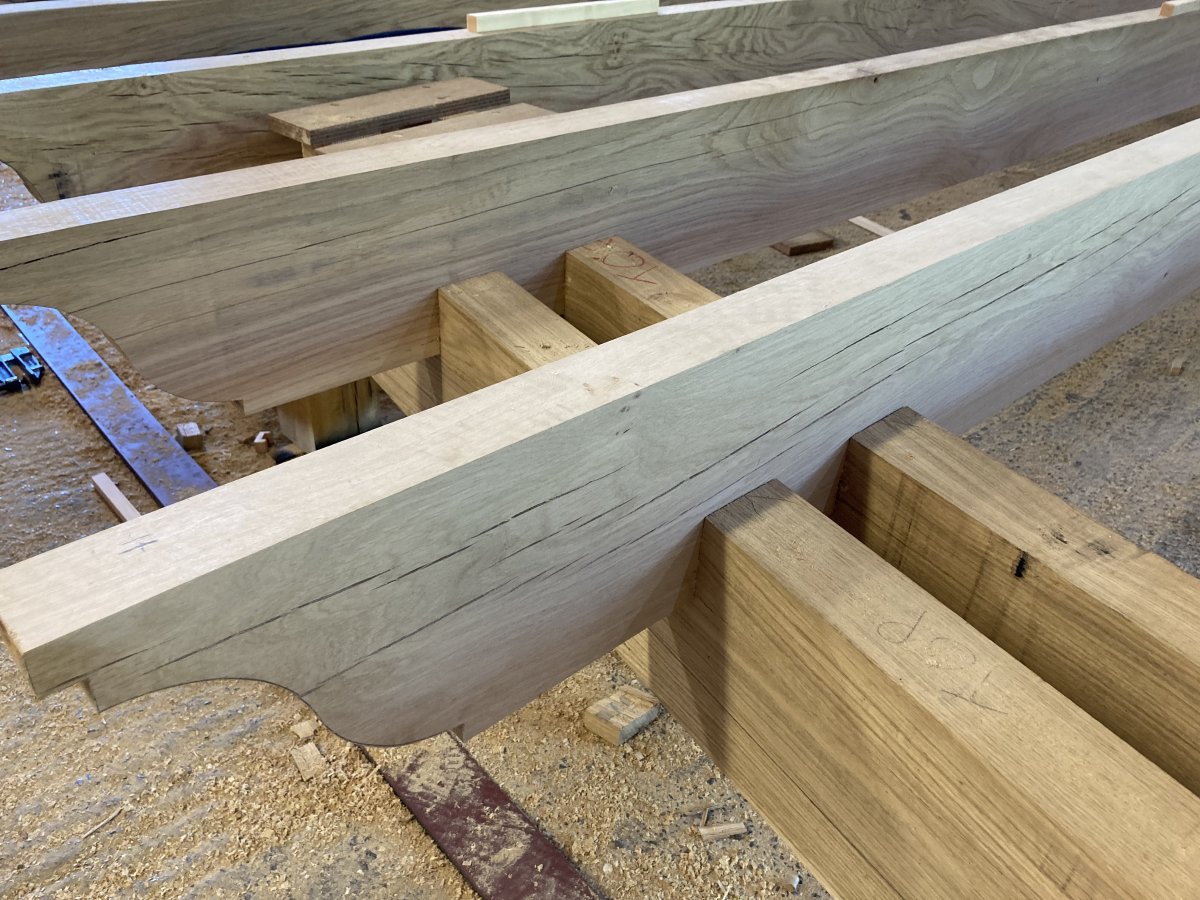 I made four very simple jigs for the housings here, these in the photo are the rear ones, so they are both angled, and I needed one for the main beam, and one for the cross beam (they are different thicknesses hence two jigs)
Very easy just a 2” straight flute cutter top bearing in the router and run it on two parallels to create the housing. 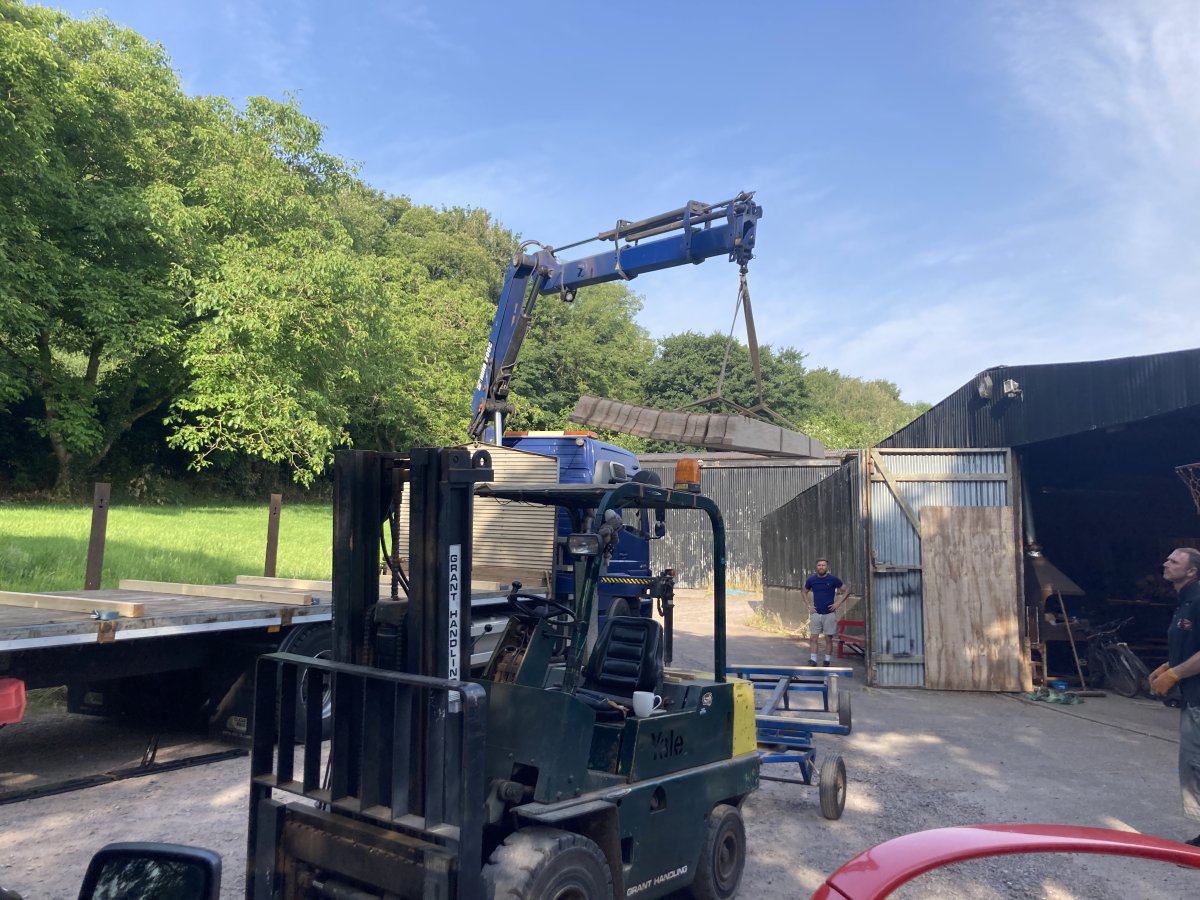 HIAB made things easy at the yard end. 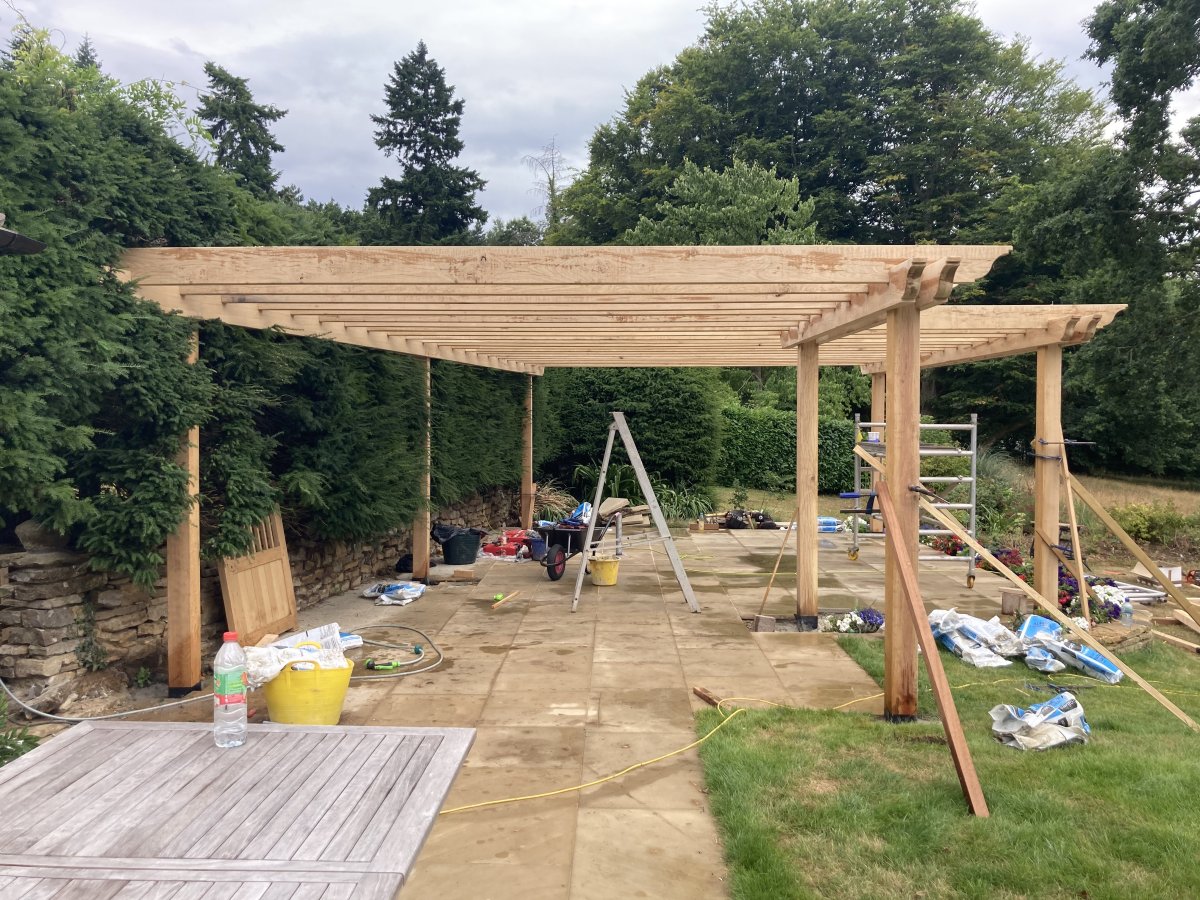 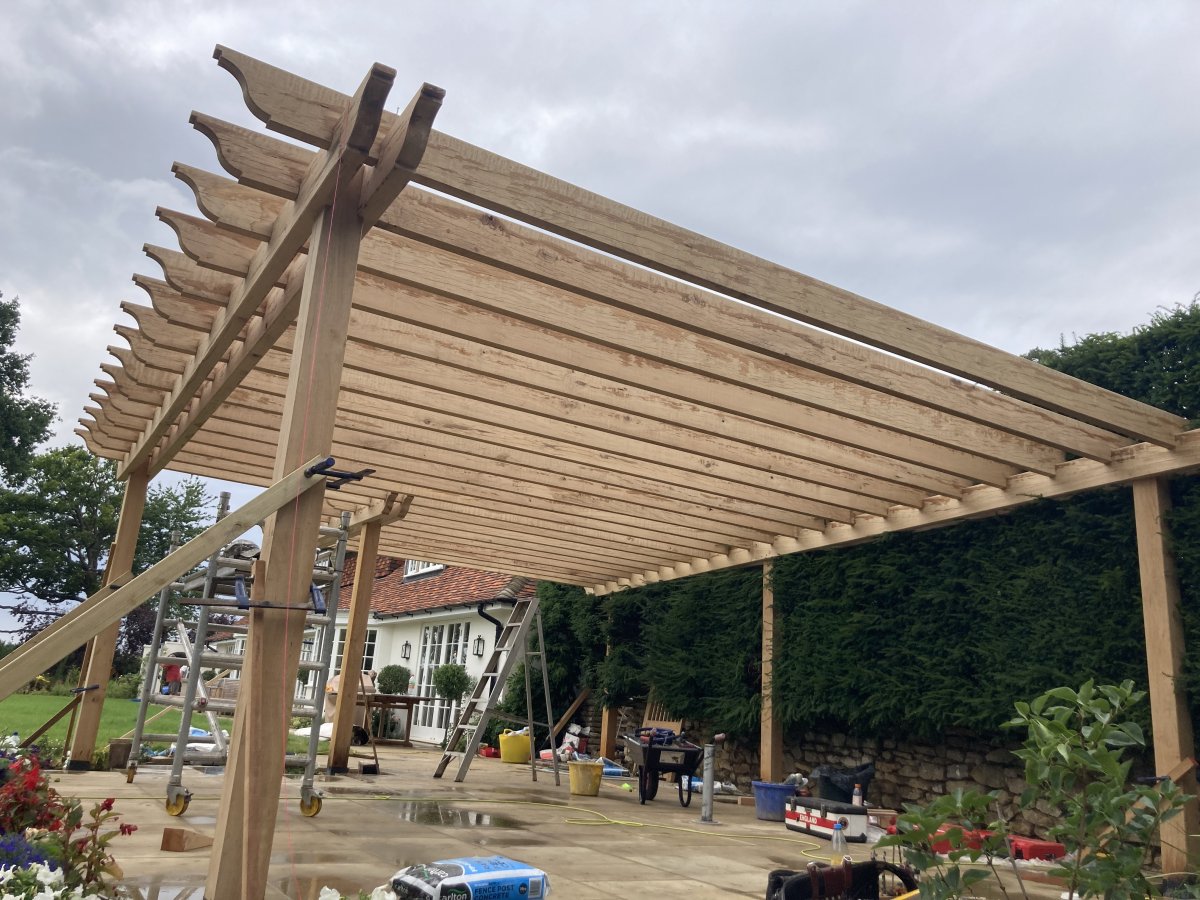 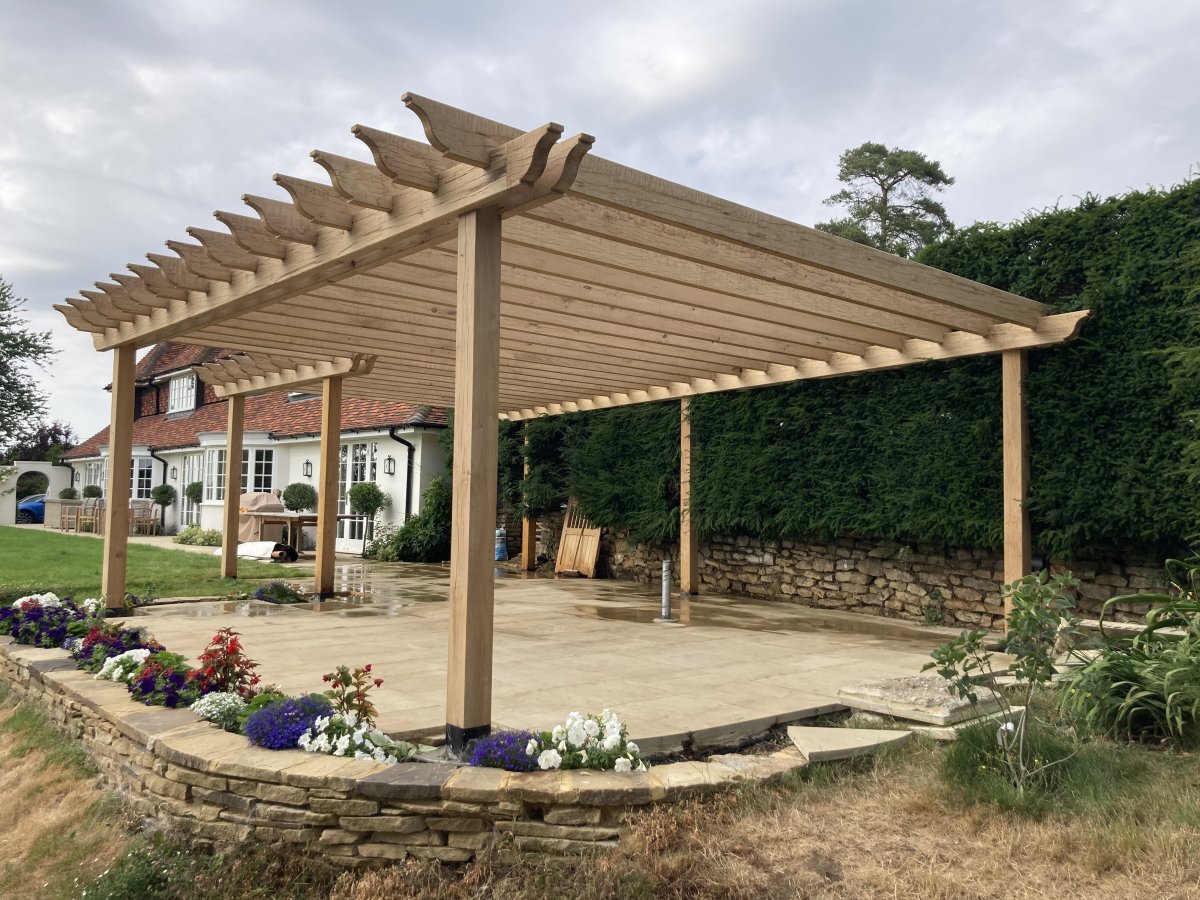 Home and dry minus some bracing.
Lovely stuff!