I recently purchased a 1992 model Multicut 2S and after setting it up on my workbench and screwing it down to it i'm having a lot of vibration problems to the extent that things are vibrating off the table.

I'm trying to strip down the pivot bolt from the top arm as i don't think it's pivoting properly and have a question or two
1. How easy should the pivot bolt come out of the arm?
2. Should i be able to freely turn the pivot bolt whilst still in top arm but not screwed into c-frame?
3. This model appears to have a bearing in the brass sleeve, but the Hegner manual doesn't show that in the exploded diagram, did they change the design after 1992?

with regards to Q1 above, i've been hitting the bolt with a hammer to free it and it's still not out yet - it has moved, but about 3mm of thread are still sticking out otherside. I can turn the bolt using a socket and ratchet but not by hand.

Any help appreciated - i'd hate to thing i've chucked £150 down the drain, lol.

On another note, i have managed to make a quick release thumb screw for top blade holder (made two actually) one out of steel and one out of ally as wasn't sure if thread on ally would take the torque on tightening up but it does

Re the vibration. Have you tried using it not screwed down to the workbench?
N

thanks for the reply

1. I've managed to get the top pivot pin out using a hammer and an M8 bolt to basically bash it out - don't think that's right??
2. the lower pivot pin can been moved by hand, don't need a wrench to turn it whilst top one needed one to turn. i couldn't turn if by hand - can i assume that isn't correct??
3. No bearing found, seems to be a shoulder on the pivot pin.

Have found that the threaded end of the top pivot pin is a few degrees bent to one side - i gather this could be the cause of the vibration i'm having????

It appears to be an M8 thread, so i'll see about making a replacement if i can't straighten it - the brass/bronze bush in the arm looks fine.

I've managed to straighten the threaded end, not perfect, but considerably better than it was. put it all back together and notice when powered on the front end of the top arm seems to whip/move left to right - only the blade mounted end, can't see anything further down.

There seems to be a bit of side to side play in the pivot pin/bush area - does anyone know how the bushes fit - are they press fit into the arm? Anyone have any pictures of their top arm bush and how it sits. Mine seems to protrude either side of the arm by 1mm or so which maybe correct as this would then clamp up against the milled flat area on the c-arm.

I did a few adjustments to the top arm and also undid one of the screws used to fasten the whole unit to my workbench. Much, much less vibration overall now, still detecting a slight after image of the blade - left to right when running, so not perfect.

More fiddling left to do i think.

Think all sorted now. found the motor mount screws where a bit loose so tightened them up and checked the frame mount screws - they where ok.

turned on, all quiet on the western front now - little bit of vibration as was still screwed to bench but only with one screw. Removed this and moved to other bench and tried again.

Much, much better now. A tiny bit of vibration in table so that if i placed a small piece of ply on top it will slowly vibrate around doing a little dance Not enough to cause problems, but not the Rolls-Royce pound coin level of vibration.

Think problem has been a number of small things (except for bent top pivot pin) but all have combined to cause the vibration issues i was getting.

I can only see a single blade when running and table and blade seem to be pretty much at 90deg to each other.

Time for mods now - looking to make a quick release tension rod as the blade release thumbscrew has made a big difference in ease and quickness.

Glad you're getting there.
N

yeh, me too - was thinking i'd just chucked £150 down the drain, or needing to spend the same again to resolve the issue - phew!

just need some material now to practice and make something - what would everyone recommend is best to use?

Sorry nealgs, I'm a bit late spotting this (NOT that I'm a great Hegner expert anyway)! You seem to be well on the way anyway.

A very simple and "golden" way to check for exactly ninety degrees between table and blade is:

1. Take piece of any scrap, thicker the better (within reason);

2. Cut a straight line half way into scrap, then stop saw;

3. Remove scrap from blade, then move scrap around to the BACK (non-toothed) edge of the blade;

4. Can you - gently - get the back of the blade to slide into the cut you've just made? If YES, you're at EXACTLY ninety degrees;

5. If not, you're not quite at 90. Adjust table angle slightly. Repeat cut in another (uncut) part of scrap;

"Easy peasy" (and definitely NOT my own idea BTW).
D

As a note to the above by AES 'Do not lift the wood from the table' while carrying out his method.
N

cheers both - did the cut test and found it a degree or so out, adjusted table did another cut, adjusted again and another cut - spot on now - and ties up with engineers square to.

After having sorted out the vibration etc, i've been able to concentrate on doing some upgrades.

1. Thumbscrews for the hold down clamp was first - made from aluminium, next i did the blade quick clamp thumbscrew - made 2, one out of aluminium and one from steel. I didn't think the ally one would take the torque when tightening up but it does, so need a piece of ally with a larger diameter than what i had available or i may just add a small handle to the one i've made to give me the extra torque needed. 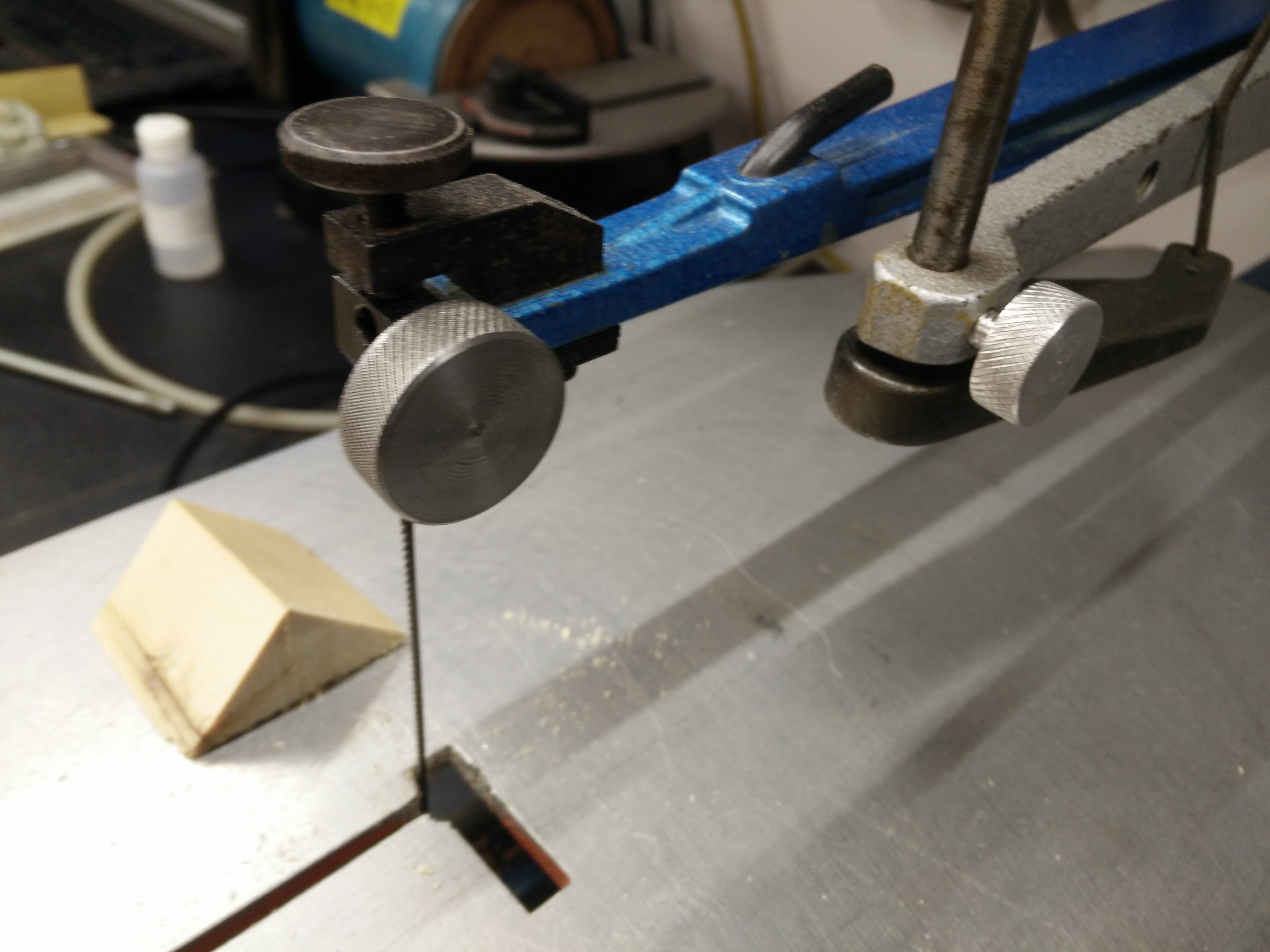 2. A quick release tension rod was next - works just like the Hegner one just not as pretty looking - hehe. After making this one, the £40 that Hegner charges isn't to bad a price really

I'll make another, tidier one now i know what to do/expect. 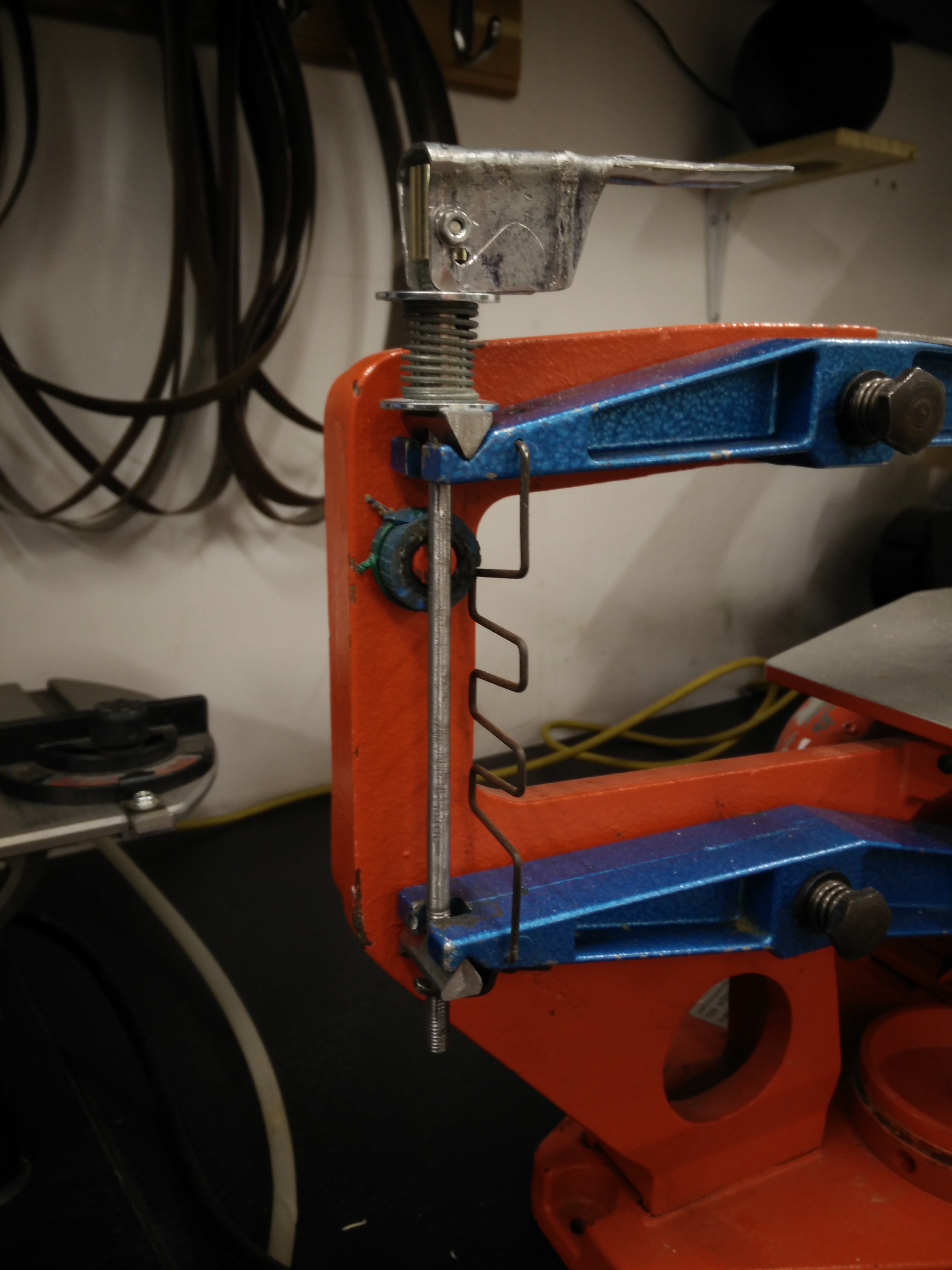 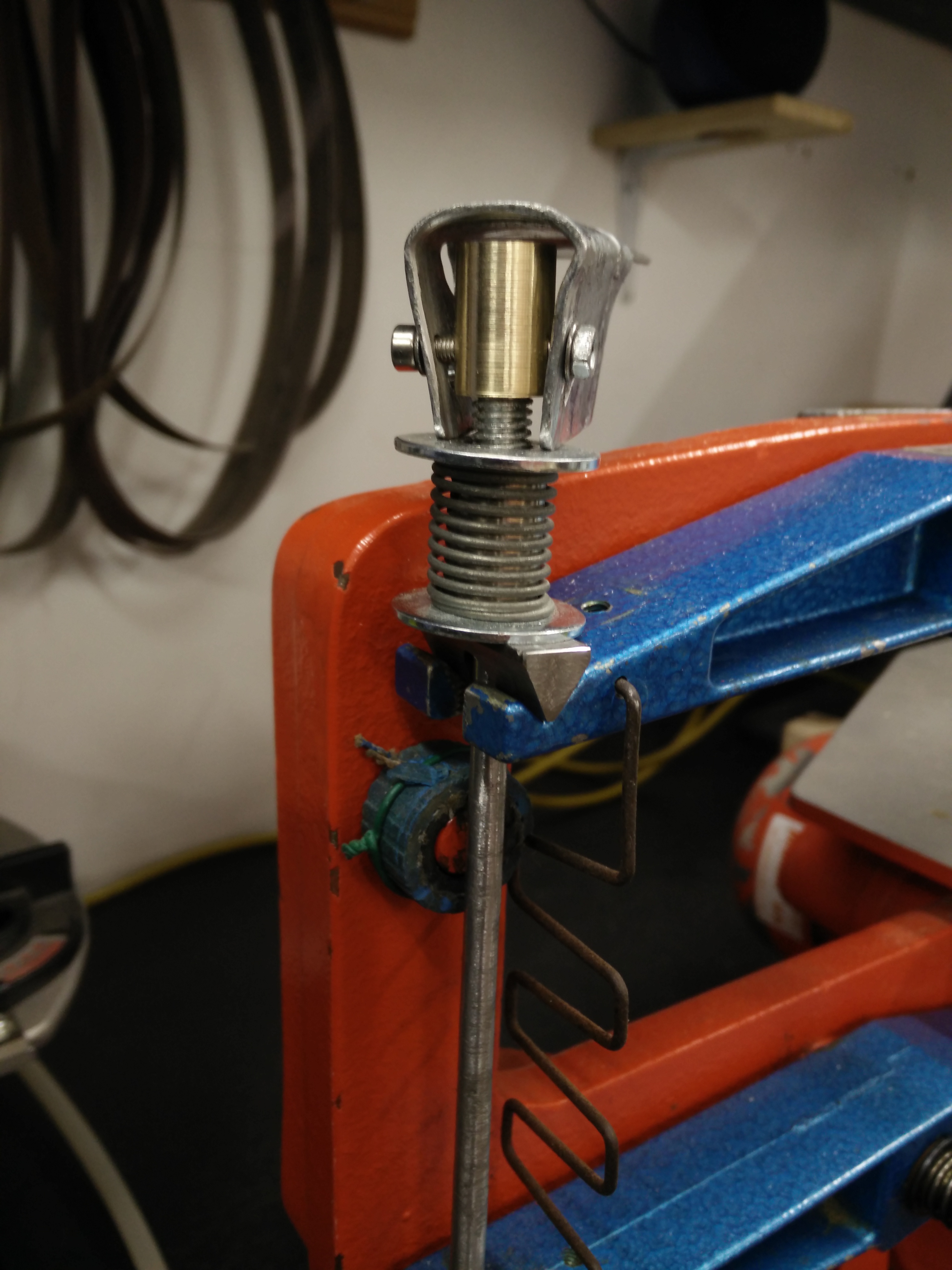 Gary, re the Quick Release, you MAY find a trip to a bike shop (or DIY place) pays off - the "thingy" they use to lock the saddle in the Up/Down position (and I think they use them for other bits & pieces on bikes too) is an "eccentric" or a "cam lock". They come in different sizes and you may well find one suitable - IF you want to pretty your own up a bit that is. And makes the Hegner 40 quid seem pretty expensive too! Here they're just a few quid.

I did have a cam lock from a bike in my bits draw. Unfortunately the hole in it was to big for the pin - hence making the one currently fitted. The Quick release above cost me nothing to make (excluding time) it was all made from bits of scrap I had lying around - lol