Yep, loving it, and the write up is great.
You mentioned 'pearls', do you carve these individually, how is it done?

They are just cut into the astragal with a small half round gouge. As the astragal moulding already has half of the pearl shape, it's just a matter of chopping out the gaps and rounding them over. The gesso makes it all smooth for gilding.

I'll do a walk through of that for you when I start carving it next week.

Sorry but couldnt resist showing my version of your magnificant creation, mine was made out of building timber and was built to hide a great big door sized hole in the wall where somone had removed a chimney breast, it made use of the hole as it was inset and covered up the broken brickwork,,the unpainted pictures show it without the mid section of the crown moulding,,,it was then, I think rather spoilt by being painted,,,had I seen your post I might have suggested gold leaf!!
Steve. 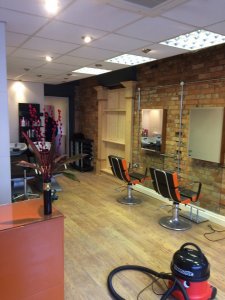 Adam W. said:
I think the cornice is growing on me, what's the opinion of the members of the peanut gallery ?
Click to expand...

Not having any expertise or much in the way of examples around me to absorb, young country, it looks good to me and way beyond what I would try. If you are happy it's a go.

Yebbut Pete, your country is young and old at the same time. It's just that they didn't do much in the way of Venetian mouldings in the 16th. century.

I dont think I've ever seen that method of ripping before. It has to be a first

I'm just cutting the mouldings for the predella and I've made extensive use of the side gauges when cutting the various small rebates for the cornice, some of which are 1/16" wide. That's pretty small for an old wooden rebate plane, but it works well even though there are 6 different fillets in this 1" wide piece of timber. 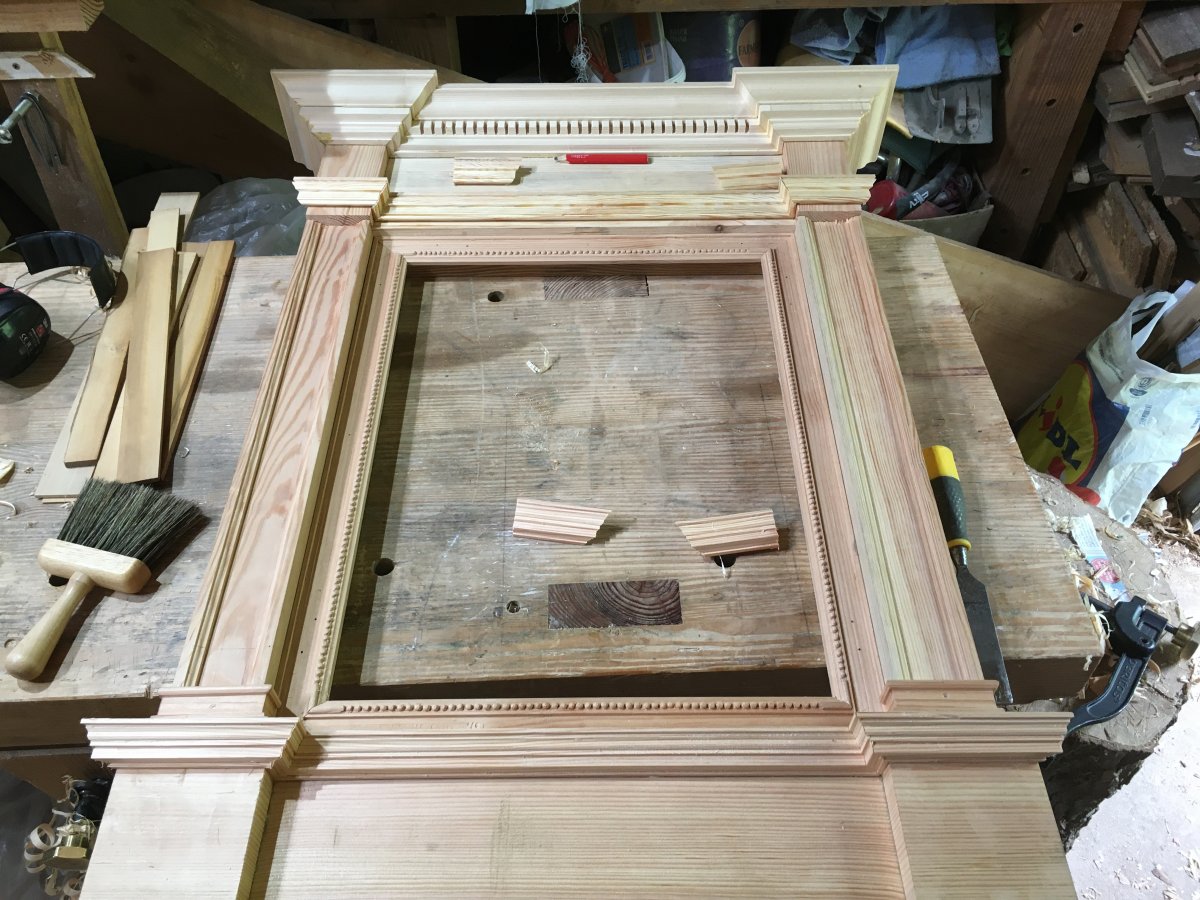 I've eyeballed the moulding more than I measured it, although the thickness of the side gauges determines the precise width of the fillet, and planed it to a shape which produces the most pleasing shadow lines.

Which is what I think mouldings are all about really. 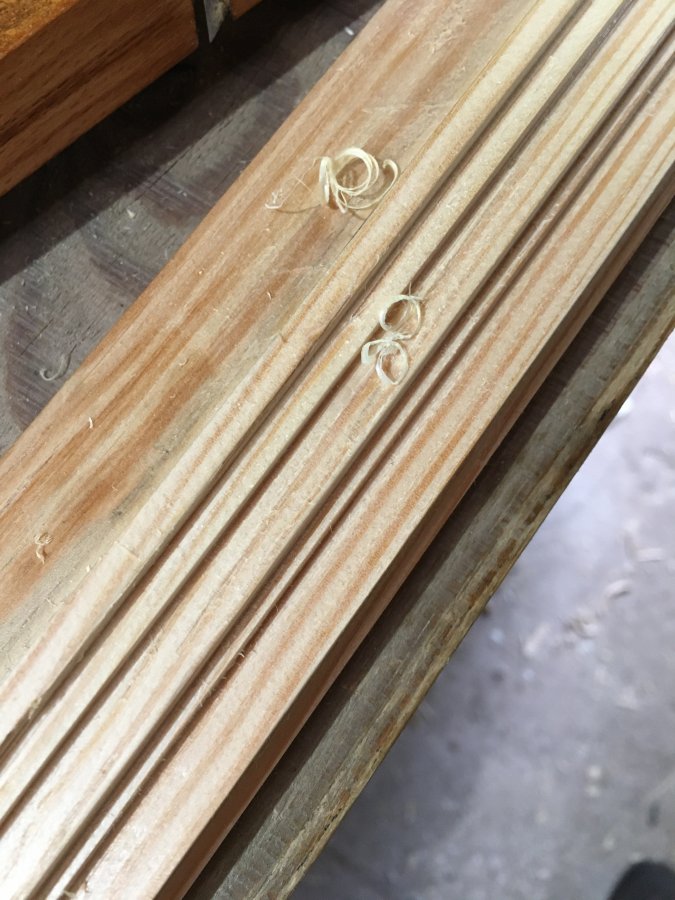 I prefer to think that I'm carving the ogee sections of the moulding and if it doesn't seem to be working I will reduce the width of that part by planing along the fillet below it with the rebate plane tipped on its side, just a couple of light strokes is all that's needed to make a visible change to the shape.


I'll stick the last moulding today and then I can carve the capitals tomorrow.
Last edited: 17 May 2021
B

Wonderful work , thanks for showing . I made this meagre Cassetta frame out of some left over decking timber aged to look old . Used the sgraffito technique though black bole onto gold leaf that was itself laid on red bole. Only took me a few days on and off.

The last moulding to be stuck is moulding E which forms the surbase of the predella and I fancied trying something new for that.

The first time I made it, it came out a bit too steep for my liking and the carving of the leaf on the ogee wouldn't have worked so well. It's on the frame which is in London at the moment, so I can't show you. 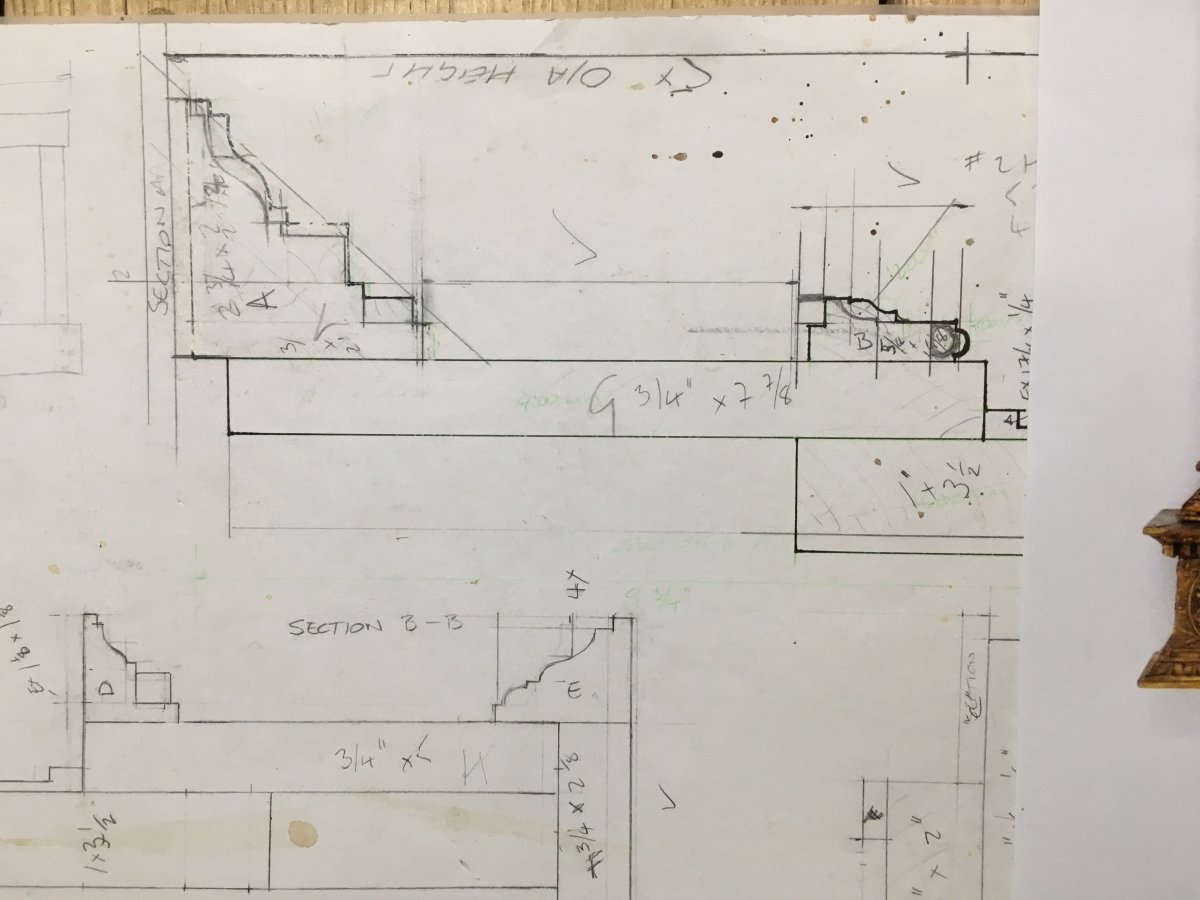 For my little experiment, I used the two off cut ends of the moulding for the cornice of the entablature and butted them together on the sticking board.

I put a bit of tape across the joint and the nails in the fence of the board held it into place. I also clamped a stop on the outboard end so that I could to plane in both directions without it flying off the end. 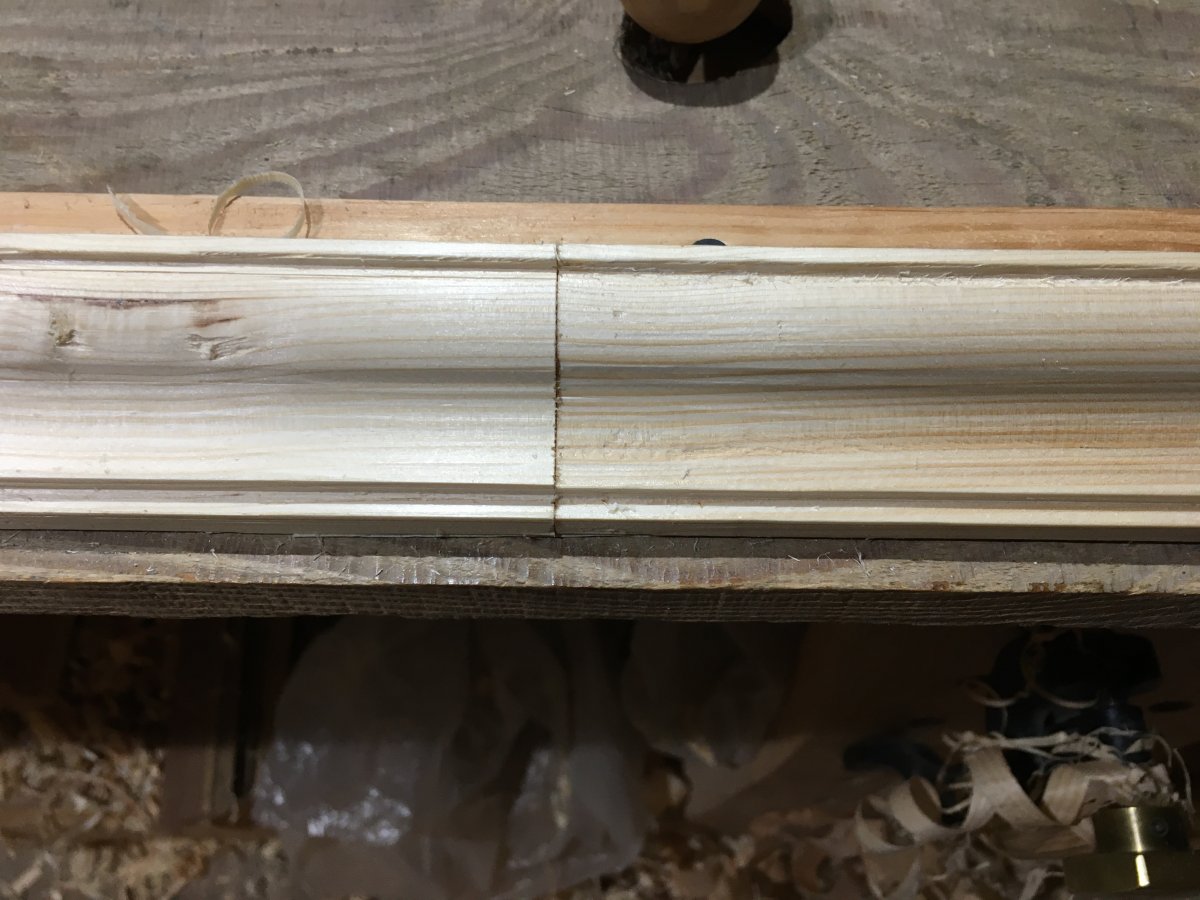 My intention was to change this moulding completely from its original form A into form E.

Using a side gauge, I sunk a fillet about 5/8" into the ogee from the top edge. This formed the ovolo for the bead and reel carved section of the surbase. 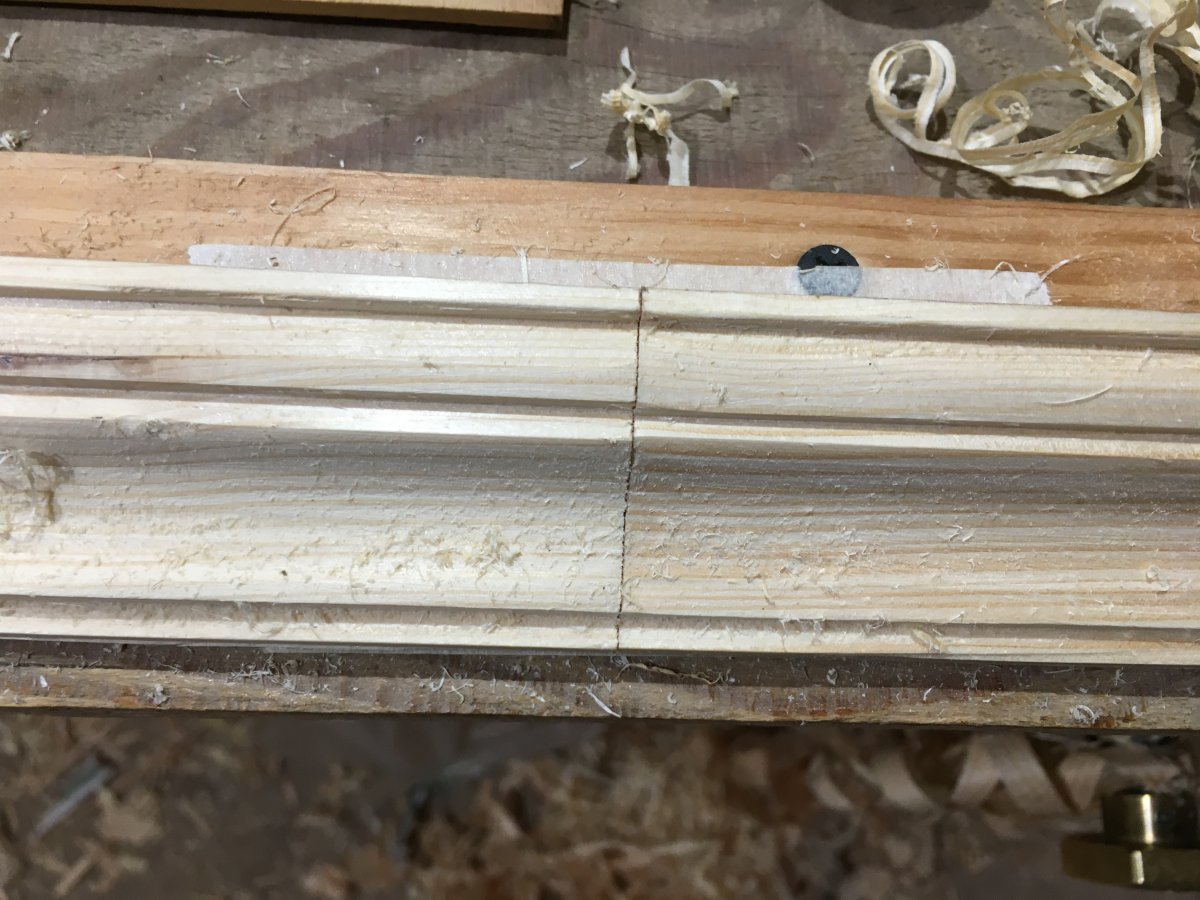 By tipping the rebate plane on its side I reduced the ovolo in width and made the fillet wider. With 1/8" side gauge between the shoulder of the rebate and the plane I divided the fillet in to two parts and sunk the second half 1/8" below the first.

This formed an edge which I could ride a small hollow plane on to round over for the top of the ogee. 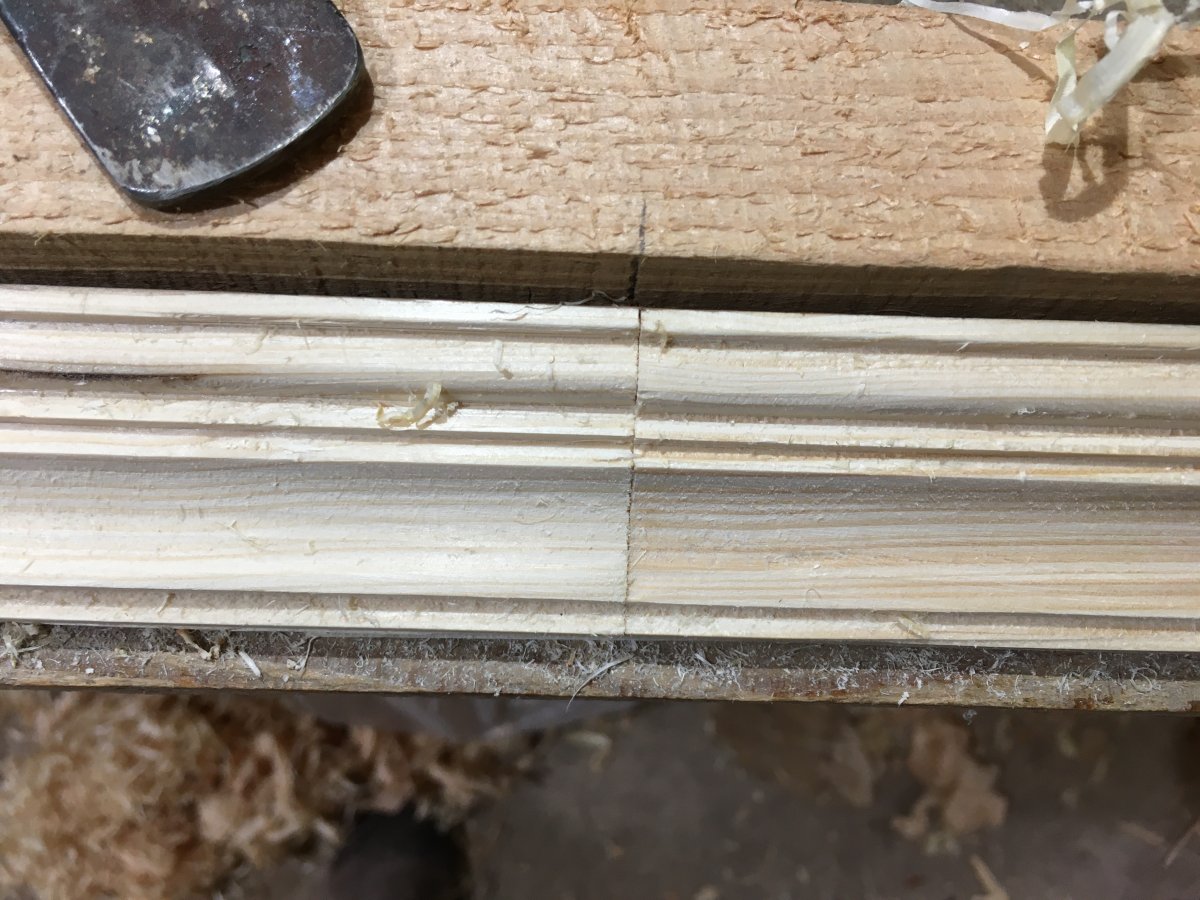 Having planed out the ogee shape and blended the curves together, I formed the ovolo properly for the bead and reel, cleaned up all the fillets and stuck a small quirk between the top of the ogee and the fillet.

It seemed to have worked quite well, so I glued it on to the frame. 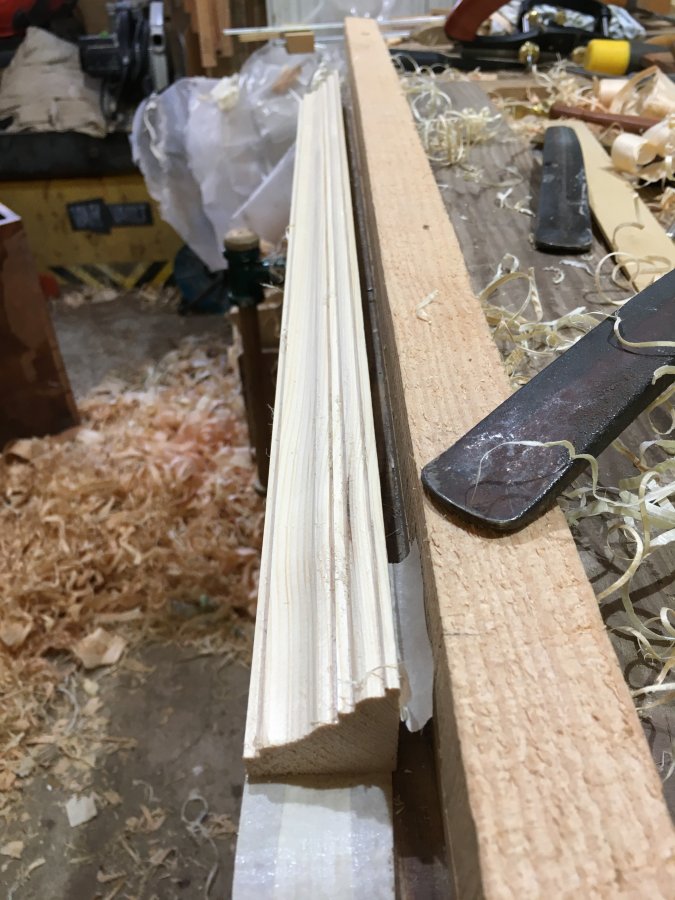 The one on the right is the original ogee and I manage to save myself a load of work by doing it this way and also use up all of the timber I had prepared for the mouldings.

These mouldings don't have to have a perfect finish, as they'll be carved and covered with gesso, and any small ridges or imperfections will be covered up. 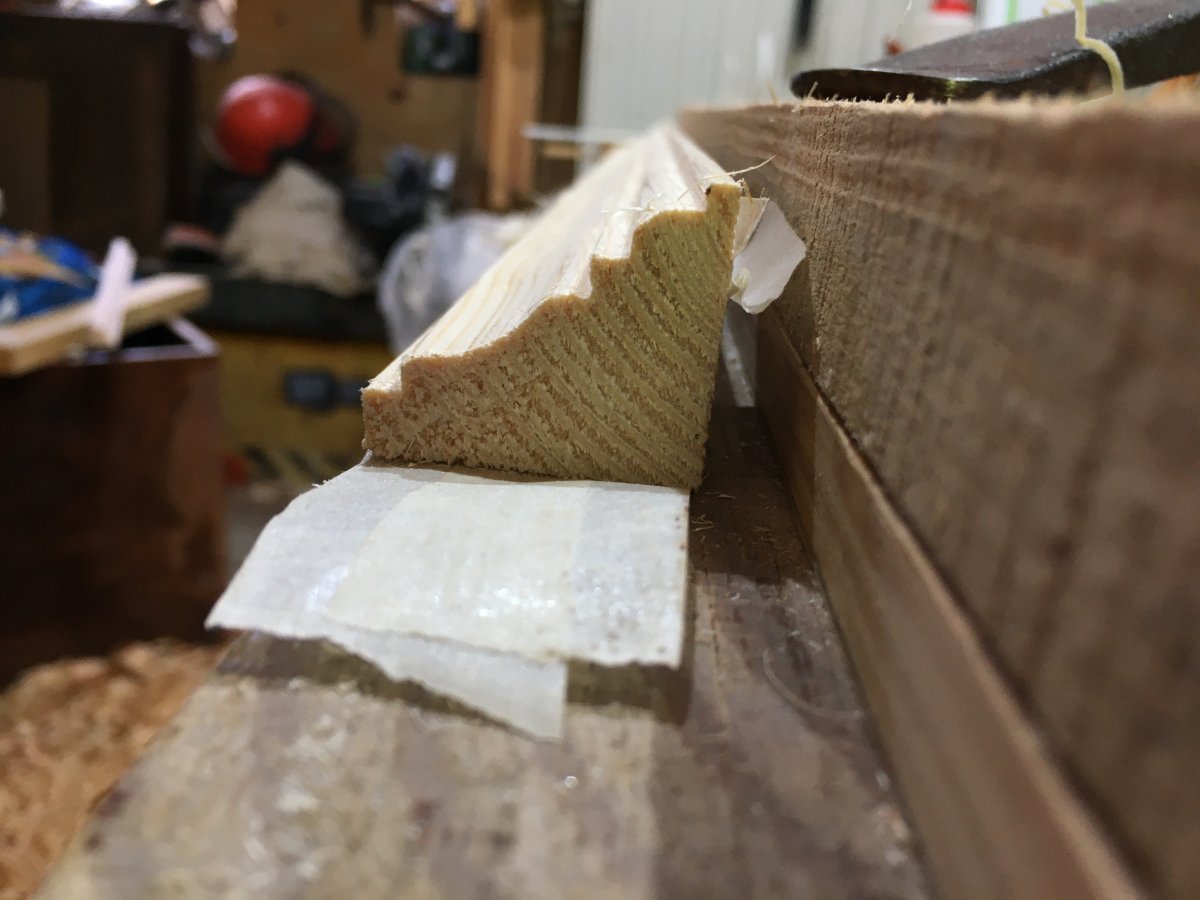 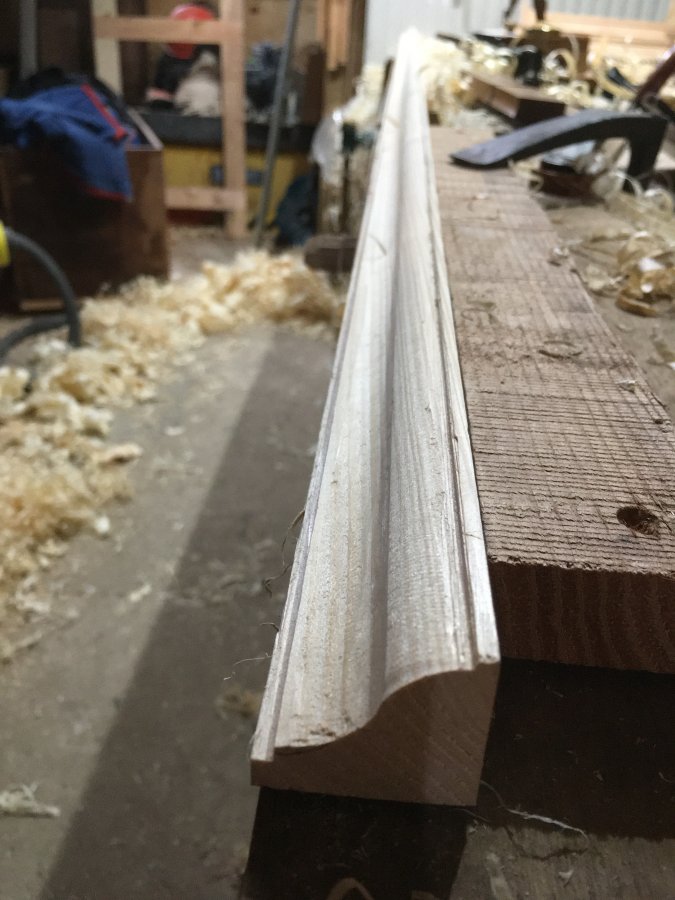 Hi Adam, superb work I've been following this with great interest.
Sorry to hijack your thread but your description of carving pearls reminded me of a job I've been avoiding.
This long clock case is a simple oak construction but has pearls planted on the front. The clock was badly damaged during a house move and the mouldings lost. I've got new glass and fixed the square bits but this stumped me. Do you think I could try the same technique and then cut the pearls (very carefully) off the astragal.... I thought they might be turned but would struggle holding them (in tension!?). I presumed the pearls were oak also
How would you go about this? Thanks for any insight you can offer

I'll cut my pearls tomorrow or later today and I'll post a description of it.

I would struggle to stick them on in a straight line and wouldn't recommend it. I reckon yours are still on a small fillet which is glued into the rebate in longish sections, as they're very straight.

So I'd clean out the rebate , make a new fillet, stick it in and carve them that way.

They are oak and the grain goes in a different way to the rest of the panel, so they are applied in one section after being cut.
Last edited: 18 May 2021

I tacked the architrave moulding on with my replica 16th century Paslode tack shooter so that I can carve the pearls.

As the pieces are larger and easier to hold on to on the bench, I can also begin to set out all the leaf carving and other dentiles. I think it's easier to do it this way, as I can ensure the details meet up properly at the miters. 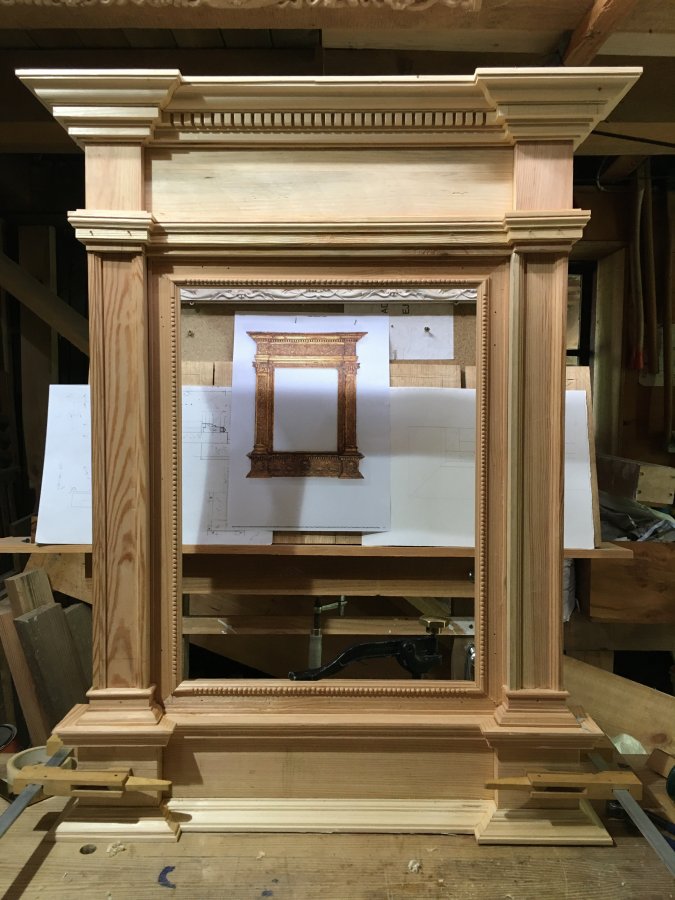 The entablature has its details.....


The original isn't carved on the returns, but I think I'll add them to this one.

It's going to look busy in a day or two. 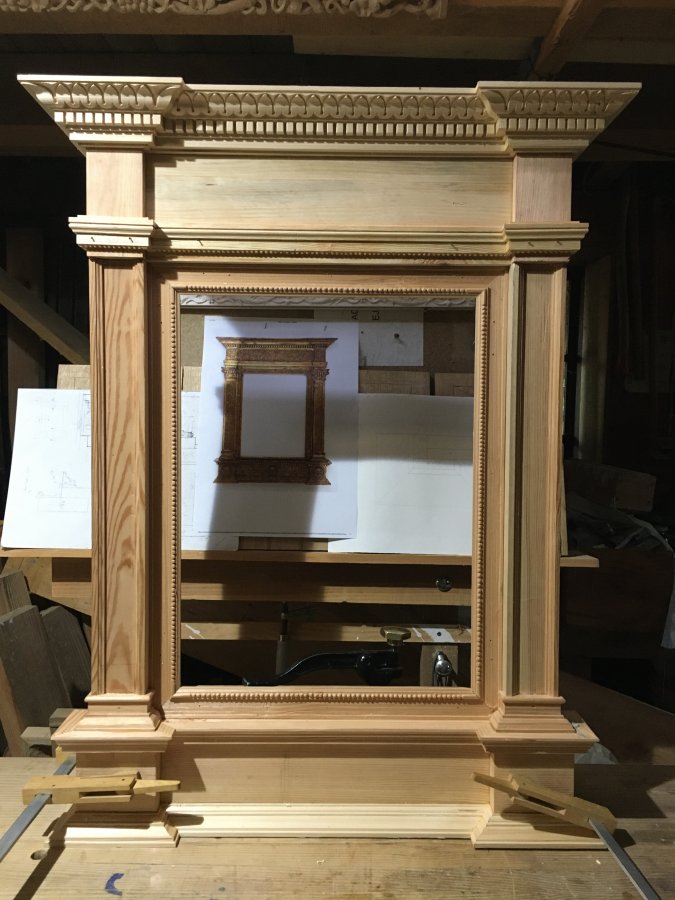 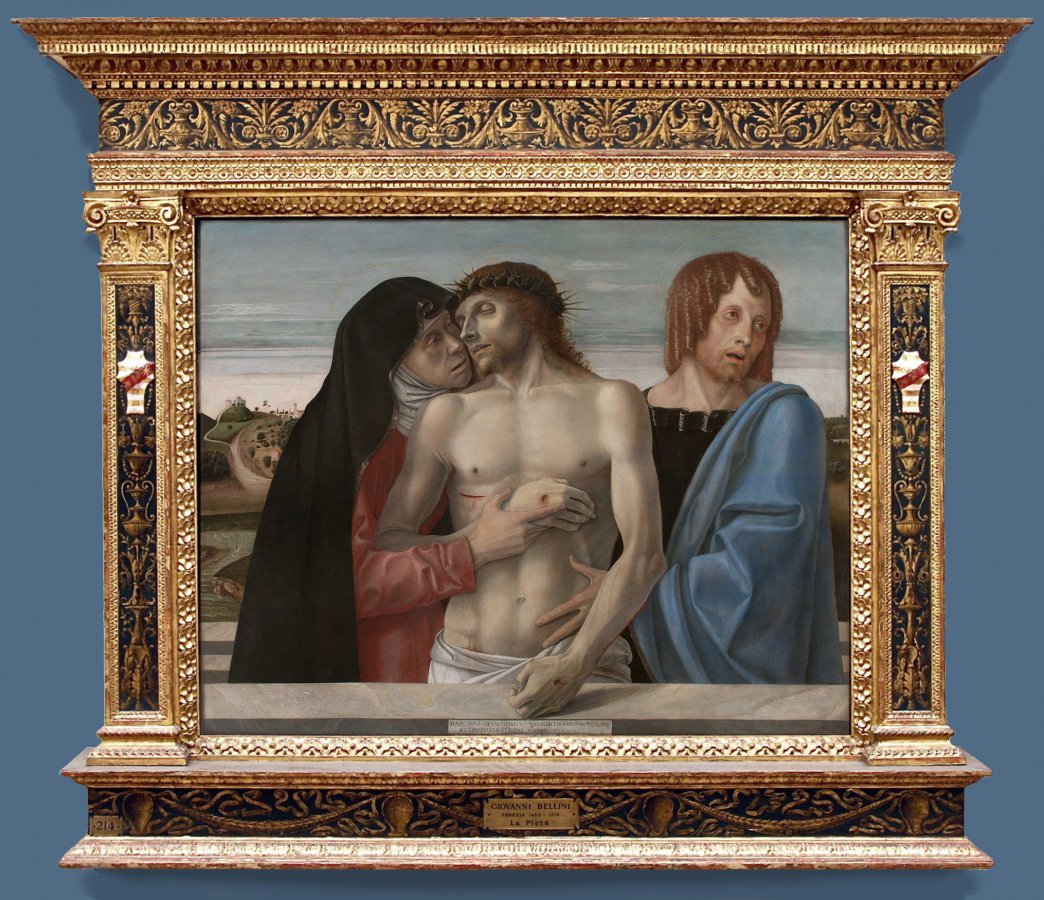 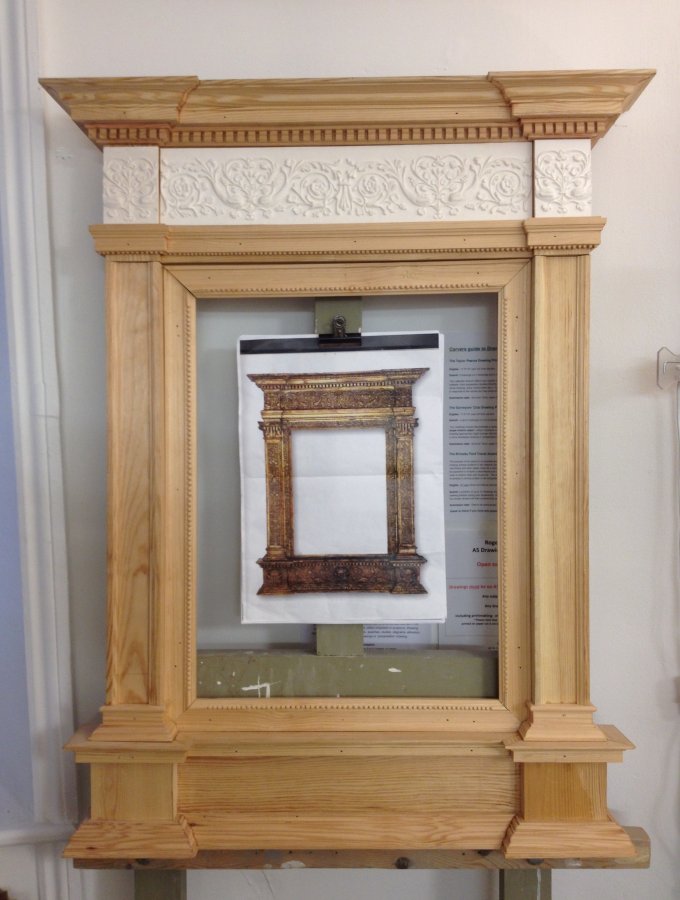 Fascinating stuff.
I suppose the frames were made by other artisans, not by the artist ?

Reminds me a bit of when Peter Follansbee talks about “horror vacui” - that fear of un-decorated spaces typical of the true 17th-century style.

John Brown said:
Fascinating stuff.
I suppose the frames were made by other artisans, not by the artist ?
Click to expand...

That's right, although it was quite common for the artist to design the frame. There are examples of Bellini and Lippi design sketches for frames, plus a whole host of other great artists of course..

Following on a theme of horror vacui and for those who suffer from kenophobia, some more detail was added today. I'll start looking at the capitals tomorrow and do a walk through of how to carve the moulding details at the weekend, for those who are interested.

I didn't adjust any of the entablature, as it's the camera distorting things up in the corners. 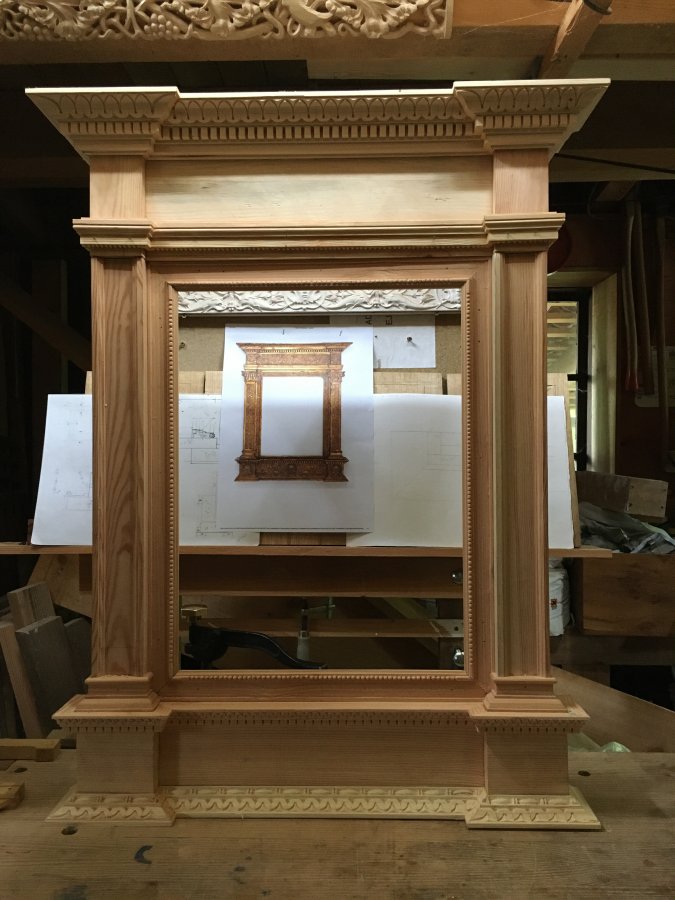