The plan was to make a small plane using available materials (brass and wood). I decided upon a bullnose because he does not have one that works. Originally it was going to be a riveted brass-wood-brass sandwich, but I was inspired by posts on this forum (mostly the impressive Aled plane kits) to try dovetailing a brass sole. As I had never done anything like this before I made a prototype/concept demonstrator first. 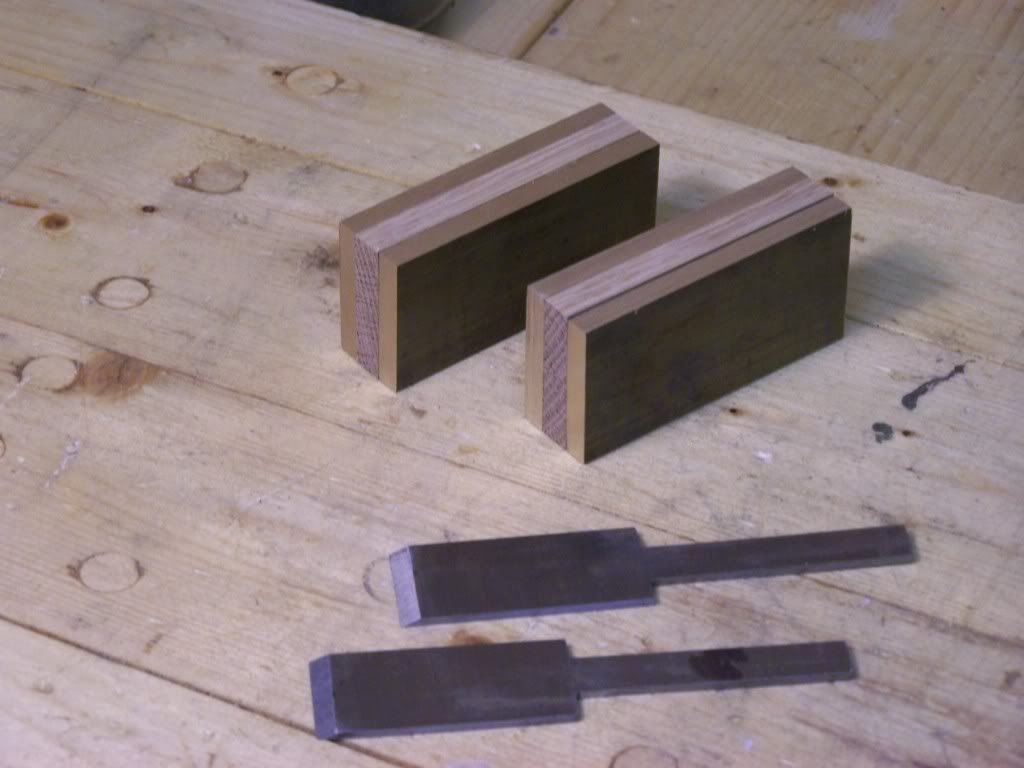 Materials prepared: brass bar from an offcut; oak stripwood; 2nd hand stanley 2" plane blade cut in half (had to use a tungsten carbide rod blade when I got to the hardened bit) and ground on a bench grinder. 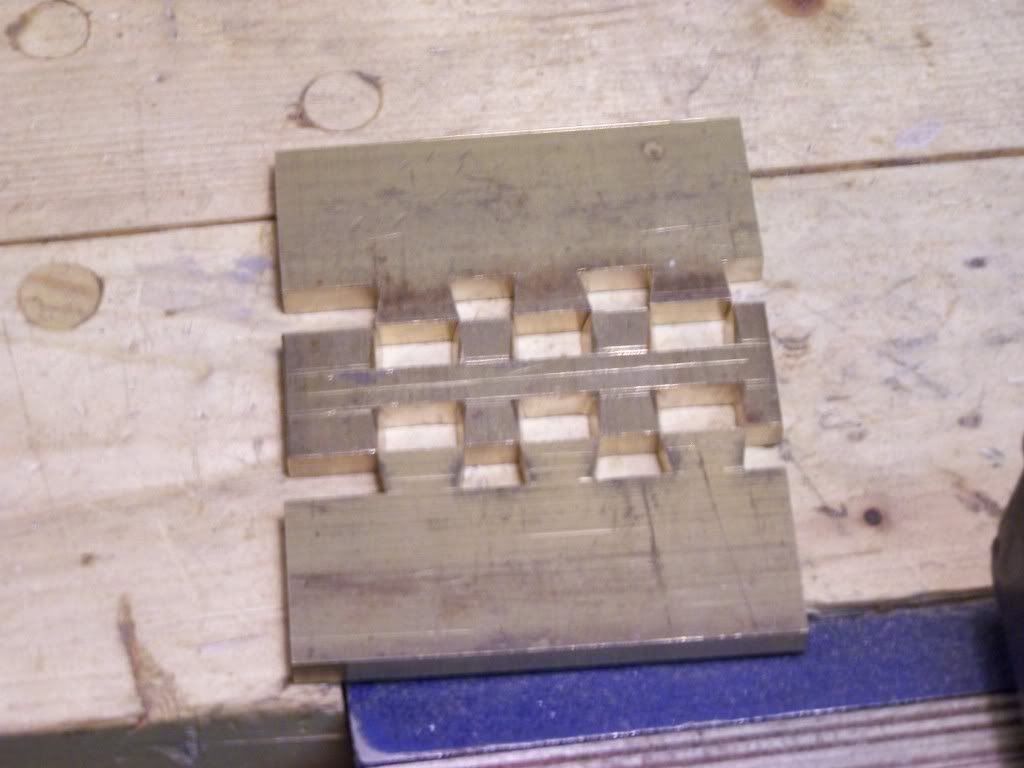 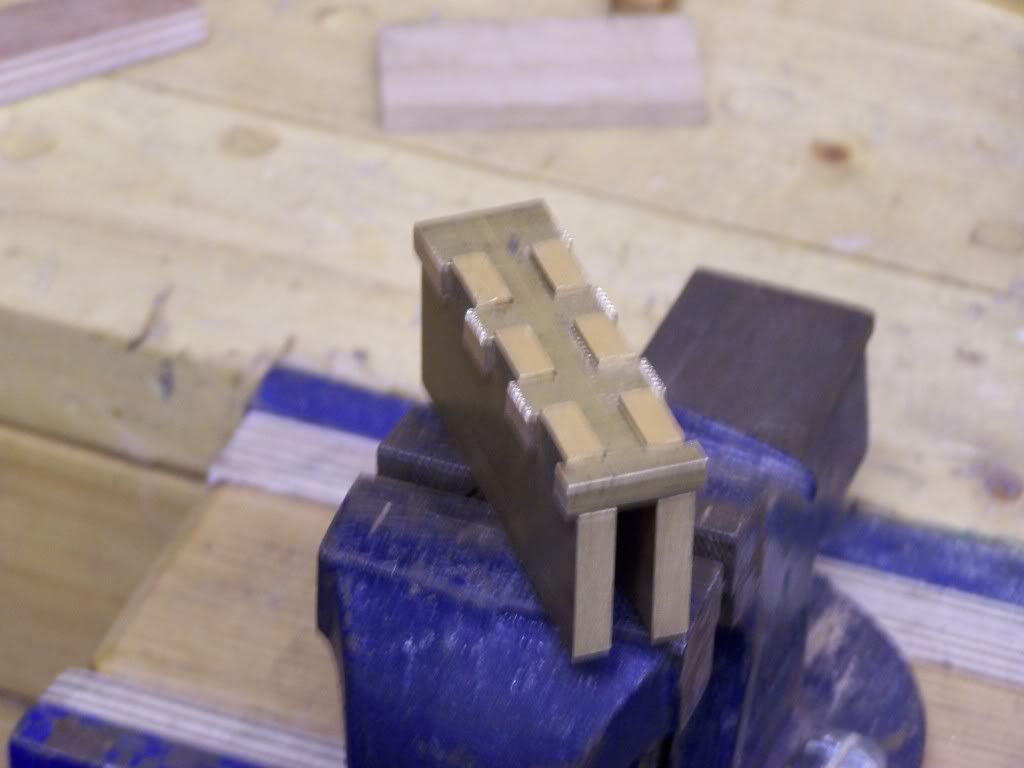 Initial assembly - this took some hammering/squeezing with a vice. 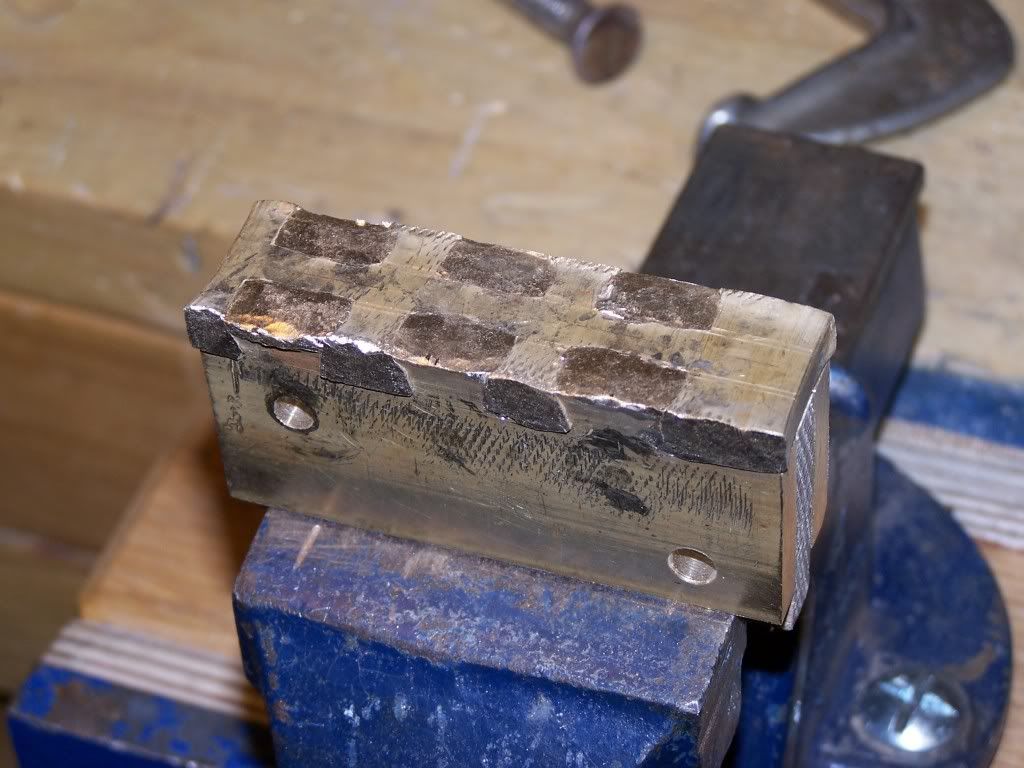 Peened... and what a mess! Didn't think I would be able to recover this. 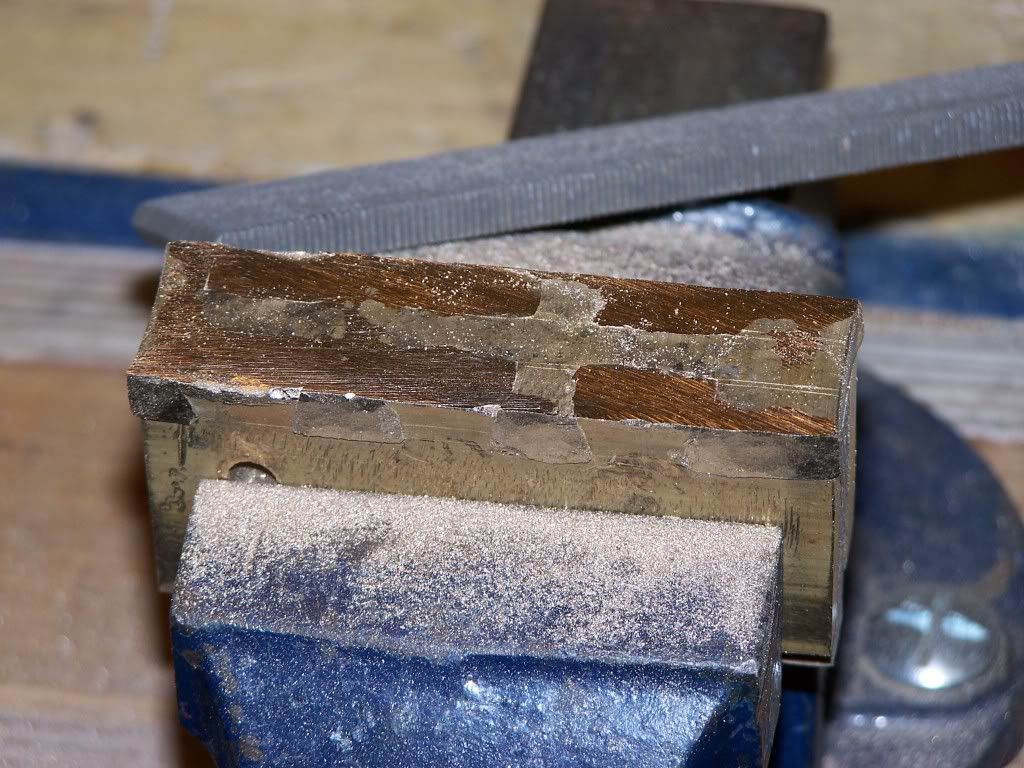 Looks better with some filing. 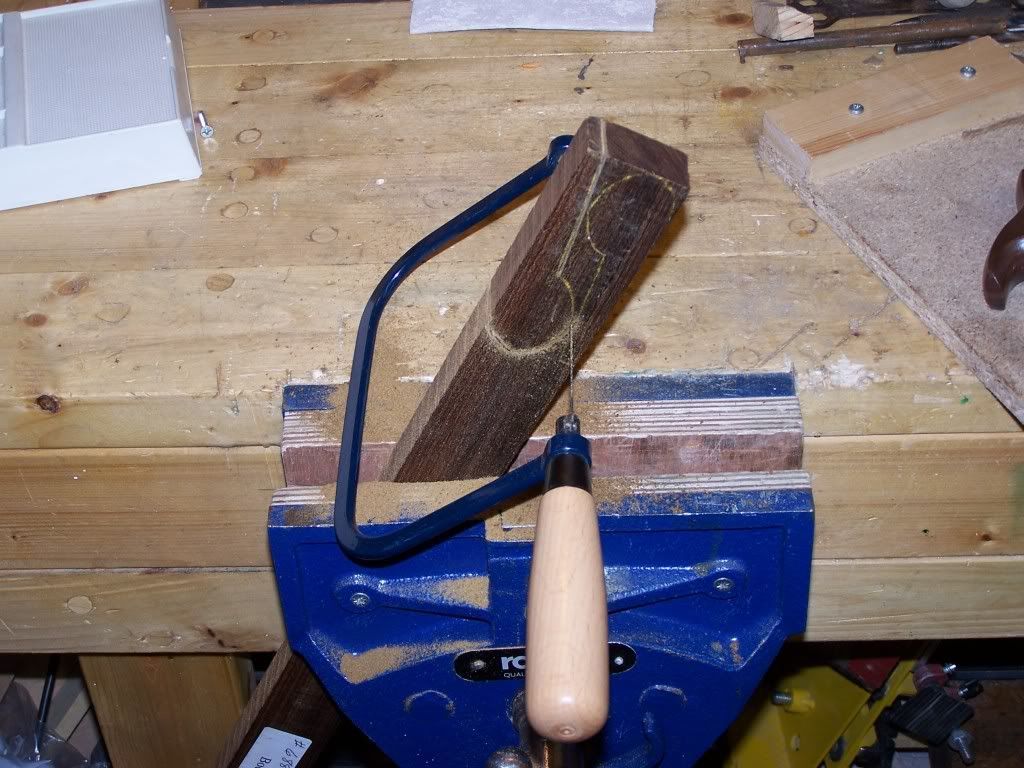 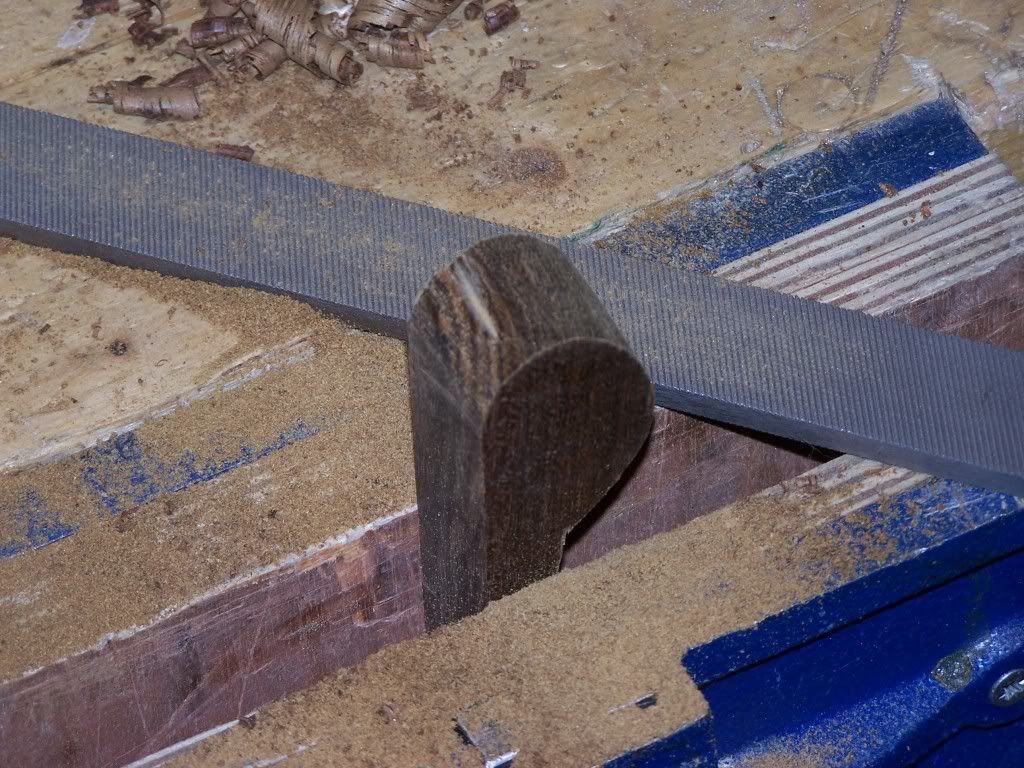 No pictures of the riveting through the oak infill - I was too ashamed by the mess I made. It took many hours and 2 sets of rivets. I think the problem was that I drilled too large a countersink for them, resulting in their crumbling with my attempts to spread the end such as to fill the countersunk hole. This resulted in a few pock marks in the plane sides left by bits of brass which broke away from the rivet heads.

Finished! Just in time (Christmas eve).As you can see, it has some faults: pock marks from dodgy riveting; sides not quite square to base, even after much filing; nose must be removed to sharpen the blade; wedge needs to project further forwards on the blade. These may be improved upon when (if) I find time to make the Mk2. This time I felt that I was going to make things worse if I made further attempts to rectify the faults.

Having spent far longer than planned making this, there was only one recipient on Christmas day.

My father seemed pleased with it, which is the main thing.

Do it today; tomorrow is promised to no one!

Any chance of a bigger pic of the finished plane?

There does not appear to be a rename option. 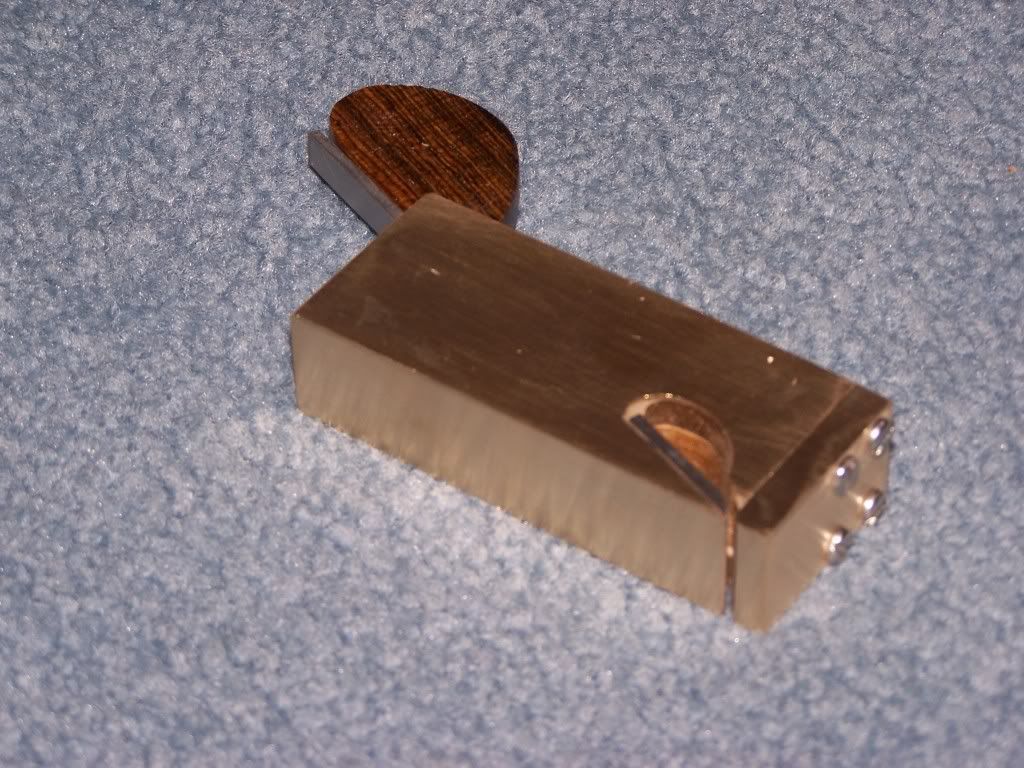 Made a couple of tweaks today - ground the "tang"(?) of the blade (the long thin bit going through the body) a bit thinner to allow for some lateral adjustment and re-sharpened the blade slightly more square so that less adjustment is required.

Roy.
First people deny a thing, then they belittle it, then they say it was known all along! Von Humboldt

I bet your father was over the moon.

Mick
It's better to be a little late in this life than early into the next.

don't put yourself down like that , its a good effort really , only one small point why the pan head self tappers in the end ? hc
kind regards.

They are stainless steel machine screws, M3 pan head. I would have preferred cap head but this was all that I could get from the DIY shop at this size. The design evolved during making, resulting in the screws being tapped into the plane sides for strength, with the trade-off that they could not be sunk into a clearance hole (too close to the edges). The original plan had two screws on the centreline but I was not convinced that they would hold well enough in the wooden infill.

How about adding a little chamfering around the top edges to add a little decoration? Konrad Sauer blogged a while ago about adding chamfers, and how subtle details could change the look of a plane. His website is really worth a browse if you've not done so already.

I'll try and find the post on chamfering, and add a link if I'm successful.

I have some M3 countersunk Stainless Steel screws if you want a few. I bought a pack of 50 for making my Secret Santa gift and have only used 2. Send me a PM if you'd like them.

Edit : Here you go, the stuff about chamfering is about half way down the page.

Benchwayze wrote:I know this much... I wouldn't know where to start with this peening; or whatever it's called. So don't put yourself down! If it works, it's a good 'un!

It really isn't as difficult as it seems, there isn't any "magic" involved, just a couple of whack wiv an 'ammer.

The instruction manual for my Small Shoulder kit goes through the whole process in some detail. PM me with your e-mail address if you're interested and I'll send you a copy.

There is in fact a chamfer on the top edges, initially added to prevent cuts. Thanks for the link - perhaps on the next one I may try something more sophisticated as per the examples.

Here is a picture from a different angle showing the chamfer. A bit over exposed, but you get the idea. This was done by hand, by eye, with a file. 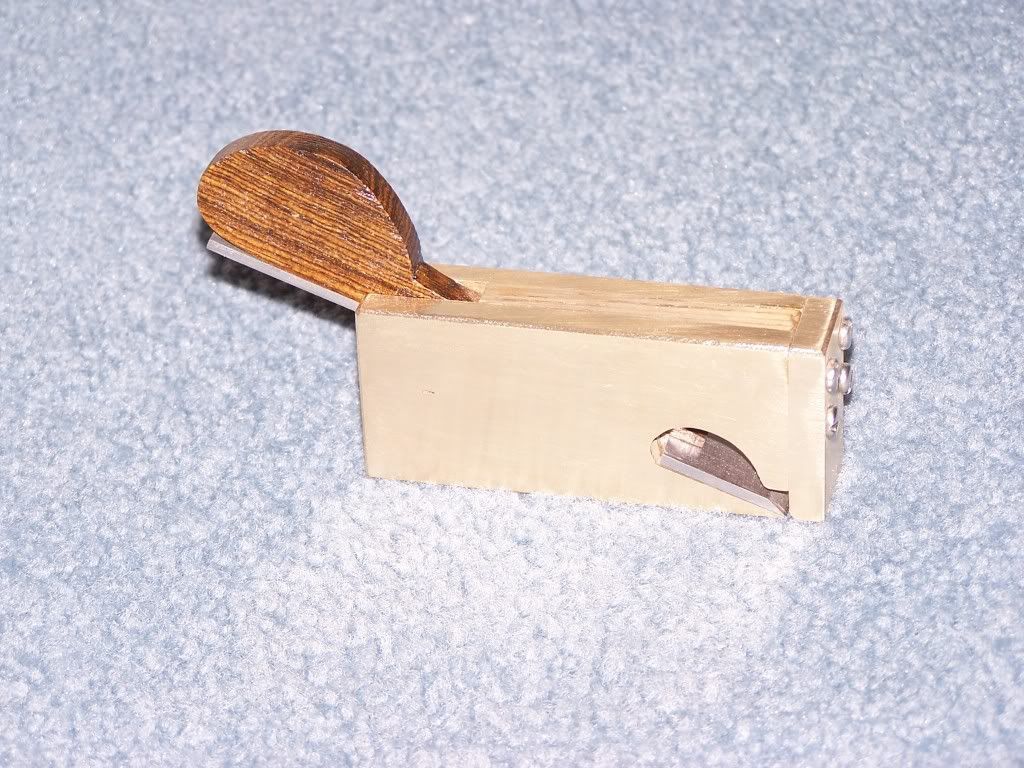 Thanks for the kind offer of the M3s. It may well be a while before I get on with the next one, so I shall not relieve you of your stock yet but I shall bear you in mind as a possible source closer to the time. I plan to finish a woodworking project that I have had on the go for months first - I may post it soon.